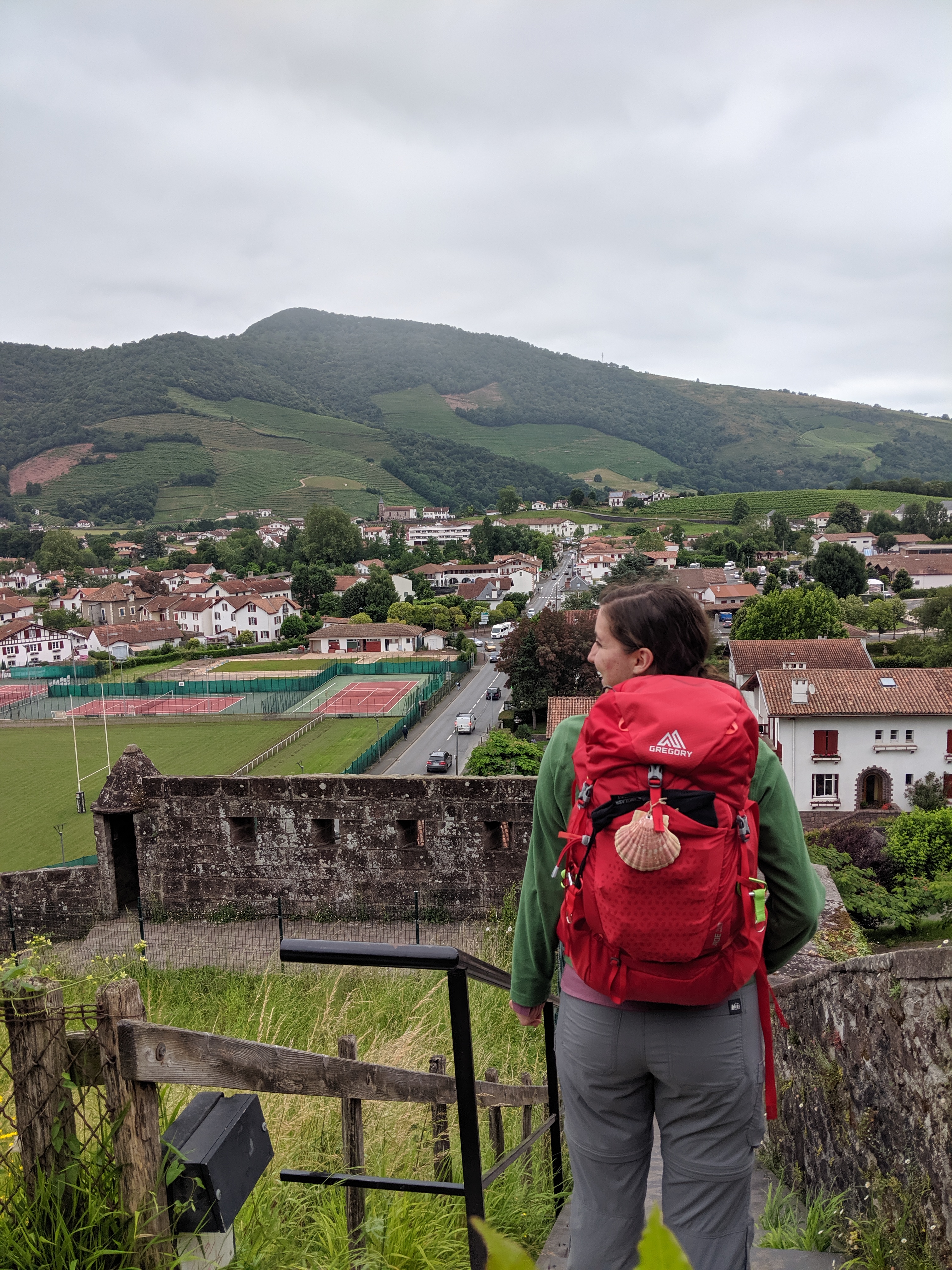 If you’ve been following my blog closely this past summer (especially my Instagram account), then you’ve probably noticed me talking a lot about Spain and this thing called “El Camino,” first featured in my post about bucket lists. But what is El Camino de Santiago, you may ask? Well, over the next few weeks, I’ll be dishing all the tea about this ancient pilgrimage here on the blog, discussing the facts, people, stories, and lessons I learned during the 500 mile trek my brother and I walked this past summer. Did our feet hurt? Why would we willingly do such a thing? What kind of food did we eat? I’m answering all of these questions and more in today’s post!

What is El Camino de Santiago?

El Camino de Santiago, known as The Way of St. James in English, is an ancient pilgrimage across Spain that dates back to the 9th century. It is said that James, the apostle of Jesus, walked this path to spread the gospel after Jesus’ death, and James’ remains now rest in the Cathedral of Santiago. The Cathedral and the city of Santiago more generally are considered the end of the Camino and the final destination for the people who walk The Way, known as pilgrims, or in Spanish peregrinos.

While there are several different Camino routes, I walked the most popular one, the Camino Frances (The French Way) with my older brother Sam. This route traditionally starts in St. Jean Pied de Port in the French Basque Country and spans 779 km to Santiago, which I round up to 500 miles (to be fair, we did walk at least 500 miles if you include all the detours and our many trips to grocery stores—but more on that later).

There are many symbols of the Camino, but the most notable is the shell. Pilgrims tie a shell to their packs to distinguish themselves as peregrinos, and there are scallop shells embedded everywhere on El Camino, from the ground to the sides of buildings, to help guide your way. In addition, pilgrims collect stamps, or sellos, in a credential (like a passport) throughout their journey. This acts as proof of their pilgrimage and allows them special access to certain hostels reserved just for pilgrims. When pilgrims arrive in Santiago and provide proper documentation through their credential, they can obtain a compostela, which is a certificate proving the completion of their pilgrimage.

Why did we do it?

While walking the Camino is traditionally done for religious purposes, that was not the main goal of my pilgrimage. Instead, there were a handful of reasons as to why walking El Camino made it onto my bucket list: I wanted to experience Spain and its culture, I wanted to practice the Spanish I learned in high school, I wanted to test the physical limits of my body, and I wanted to do something special with my older brother. Of course, I was also open to having spiritual moments, although I was not expecting some profound spiritual awakening.

I first heard about the Camino in the American movie The Way, starring Martin Sheen, back in middle school. Watching that film immediately sparked my interest in the Camino, and after that, the walk seemed to repeatedly show up in my life, whether that be in my Spanish classes or through people I met who had completed the journey themselves. It all seemed like a very distant dream until suddenly this past January, my brother and I decided this had to be the summer we do it. And thus, our Camino began.

Where did we stay?

While on the Camino, most pilgrims buy a bed for a night and stay in hostels, known as albergues in Spanish. There was a wide variety of hostels in almost every town along the way, ranging from super cheap and disgusting ones to more expensive and theoretically cleaner ones, with every combination in between. Almost none, however, had air conditioning, so we had to get creative during midnight heat flashes—I usually would wet a paper towel and drape it on my stomach, laying spread out like a starfish on the bottom bunk.

Sam and I decided early on that we wanted to spend a little more money on nicer hostels if it meant we could rest easy without the fear of chinches (bed bugs). Because we traveled in a pair and split the costs between us, it also allowed us to rent private rooms in some hostels without paying much more than two beds would have cost. This was very luxurious for us!

What did we eat?

Many restaurants also offer a Pilgrim Menu, which is often a 10-12 euro meal that includes three courses, table wine, and lots of bread. These meals are a great value for the amount of food you get, and sometimes Sam and I treated ourselves to a nice dinner out. However, some pilgrims complain that the pilgrim menus are the worst of the worst food! While sometimes this seemed to be true, Sam and I were usually quite pleased with our meals (maybe because we started with the wine).

What did we bring?

Before leaving on the Camino, we made a trip to REI and purchased about a quarter of the store… You can imagine the pain I felt at the checkout stand—I was literally shaking in fear of how much it would cost! But regardless, all of my gear worked extremely well, something not a lot of pilgrims can say. My backpack weighed 20 pounds and in it I carried the following: a fleece, a light rain jacket, a swimsuit, an extra pair of pants, an extra long sleeve shirt, a tank top to wear around and double as pjs, a pair of shorts to wear around and double as pjs, four pairs of underwear, four pairs of socks, a 2 liter Camelback for water, assorted first aid supplies, a pair of sandals, a lightweight towel, as few toiletries as possible, and some other small objects. A lot of people told me 20 pounds was too heavy for my pack—but for the most part, I used everything I brought! I’m not entirely sure where I could have cut down, except for ditching the swimsuit. 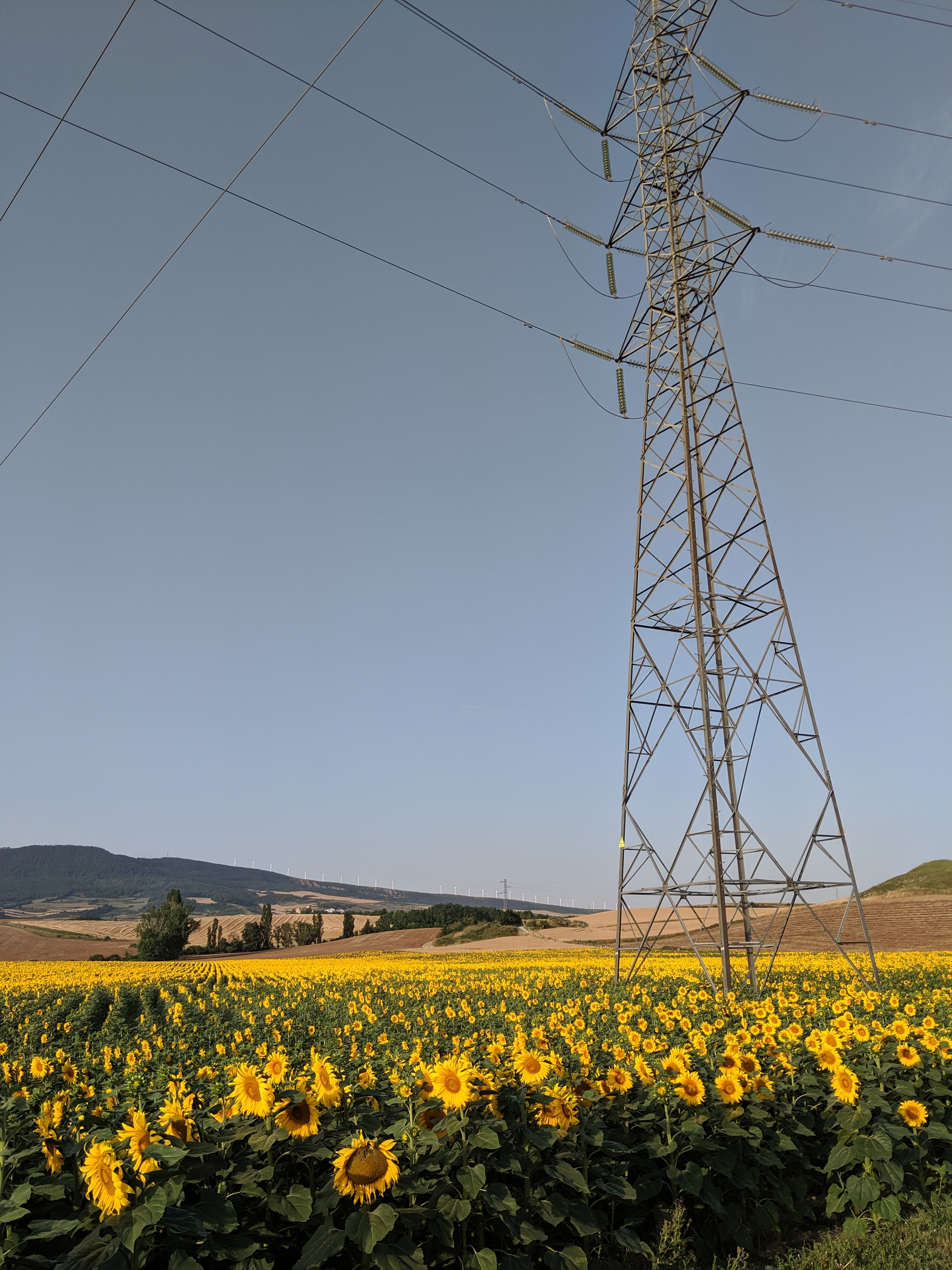 Okay, now onto the really good stuff… a day in the life of a pilgrim. Sam and I started our Camino on July 2, and we walked 33 days (no rest days) to Santiago, arriving on August 3. This meant that we averaged between 22 and 28 km (13 to 17 mi) each day. Every morning, we woke up at 5:30am and spent an hour eating a light breakfast (from the grocery store the night before) and packing up all of our stuff before leaving at 6:30. We would walk about 2 hours before taking our first rest break in a town at a little restaurant or bar. We would almost always split a traditional Spanish tortilla, which to Americans is basically an omelet (but way better!). We would then walk another 2 hours and stop again for a little snack or two. Can you tell we like to eat a lot? Sometimes during our walks, Sam and I would have deep discussions with each other. Other times we would walk separately in silence, and if we were lucky, we got to walk with other pilgrims and hear their stories. Our favorite pastime was trying to take the most unflattering sneak-attack selfies of each other!

By 1 or 2 pm, we would have arrived at our destination for the night. First Sam and I would check into our hostel, and then we would take showers to get squeaky clean (a much-needed break from each other). Afterwards, we would enjoy a nice Spanish siesta and wake up feeling quite sore and hangry. In pursuit of a grocery store, we would throw on our sandals and leave our backpacks in the hostel to walk around the town. Sometimes we would eat out in public on a bench, sometimes we would eat back in our hostel, but no matter what, we would always make an effort to be tourists in every town we stayed. This usually involved exploring churches, monasteries, parks, and sometimes even museums. Besides experiencing the culture, these walks would do wonders to relive the ache in our legs after a long day of exertion (walking to feel better after walking? Counter-intuitive, I know). We’d wander back to the hostel and be in bed by 9:30, ready to do it all again the next day!

I could talk about the Camino for days and days (in fact, I’m scheduled to give a presentation on it at my old high school in December). However, this post is already ridiculously long, so I’ll cut myself off here… If you have any questions about the Camino—how it works, how I liked it, specific gear I purchased, etc.—please feel free to reach out! I am more than happy to help my fellow peregrinos. In the mean time, be sure to stay tuned for my other Camino posts in the upcoming weeks:

You can subscribe to my blog and receive email notifications straight to your inbox by clicking the “Subscribe” button in the right sidebar. I am so blessed to have been able to go on this incredible journey, and I’m beyond excited to share it all with you in the coming weeks.

I hope you are having a great Thursday so far, and as all the pilgrims say to each other, ¡Buen Camino!