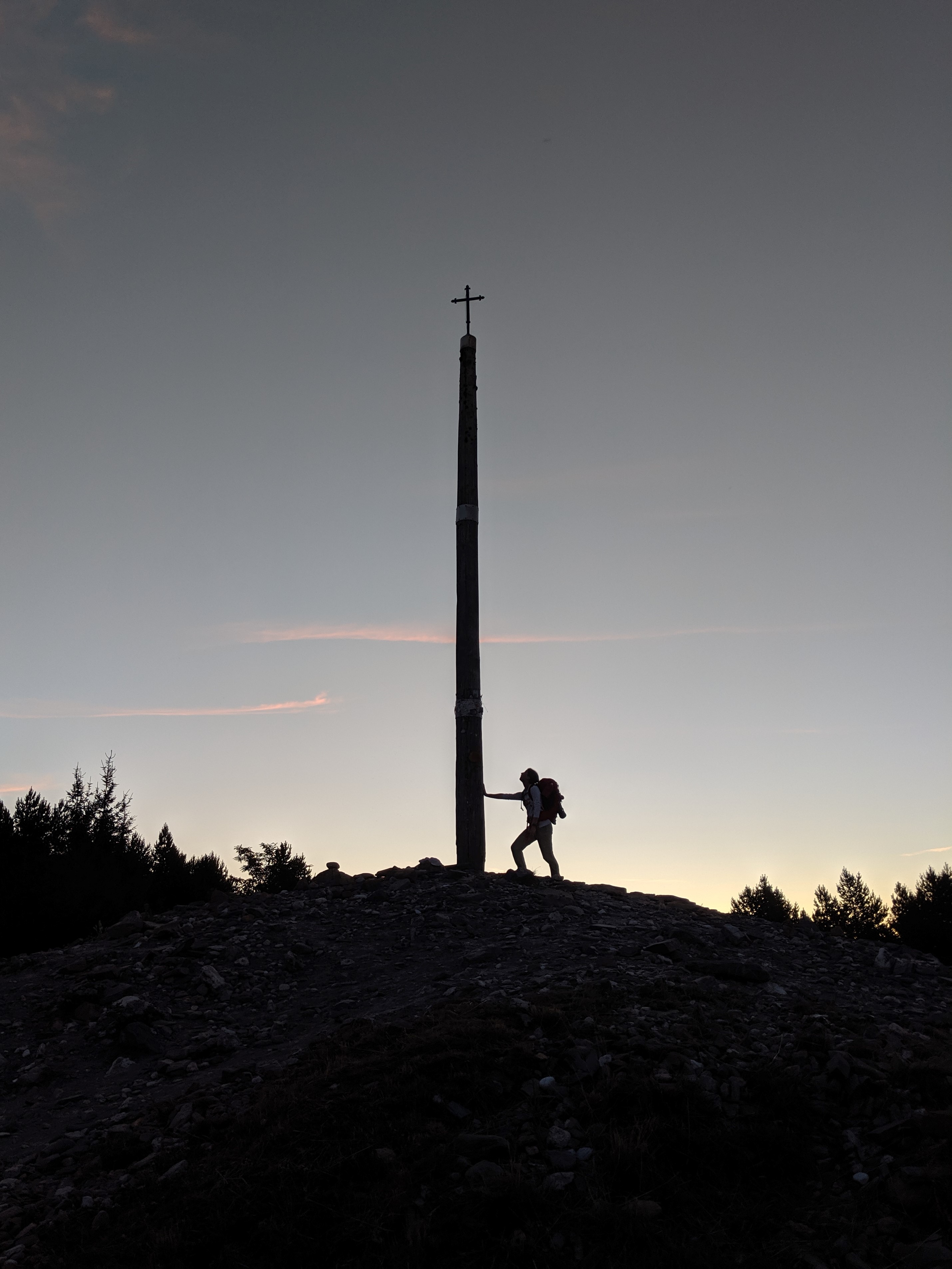 Today I’m sharing the third post in my Camino series, telling a few of the heartfelt and funny stories from throughout my journey. These are some of my go-to anecdotes when people ask me about my trip abroad! If you missed the first two posts, you can read about what the Camino de Santiago is and read about the people I met. I tried to limit each vignette to 200 words but, uh, y’all know how verbose I can be—I think each one got slightly longer. What can I say, you just can’t put a word cap on the Camino! Anyway, I hope you enjoy… 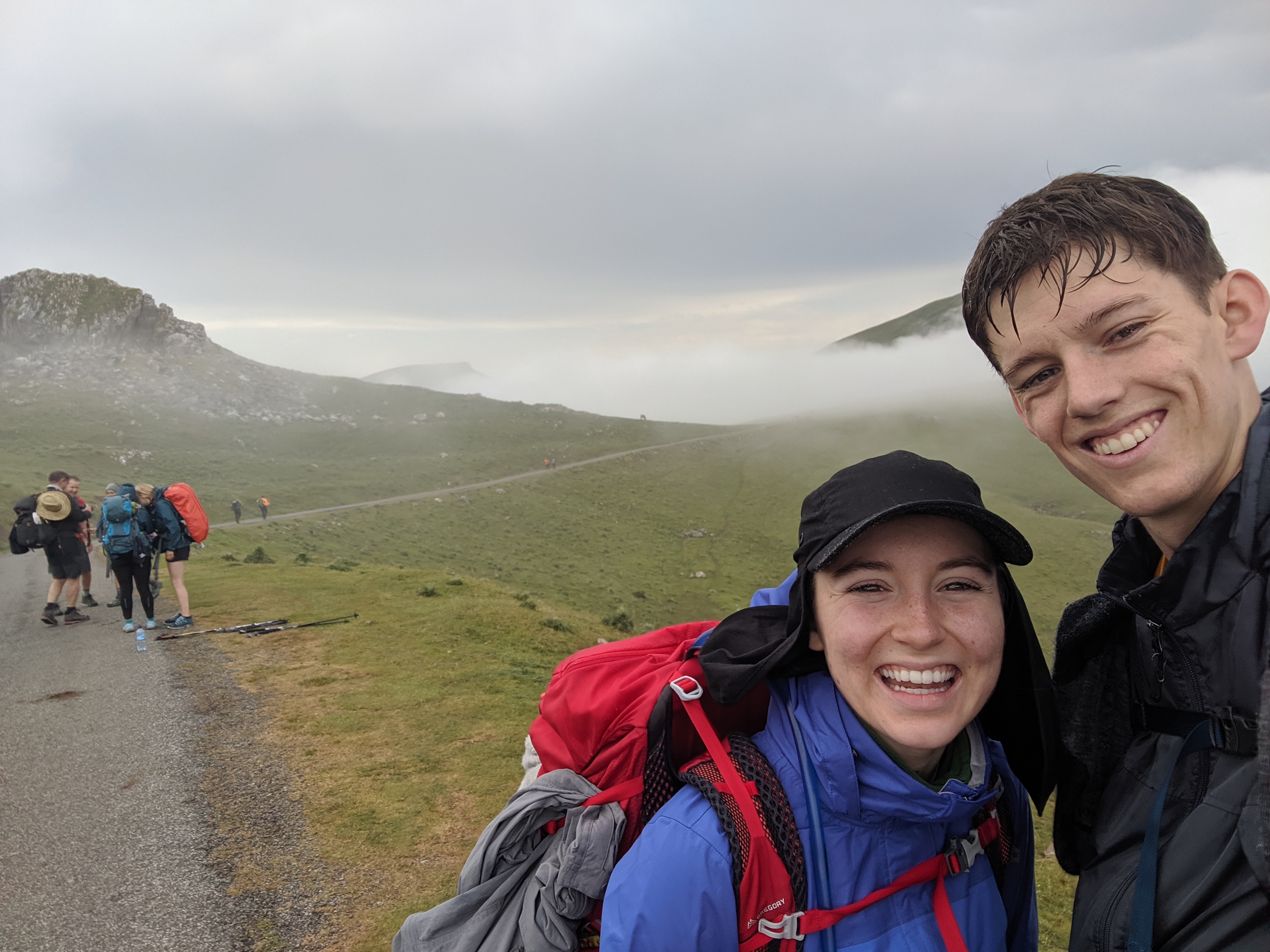 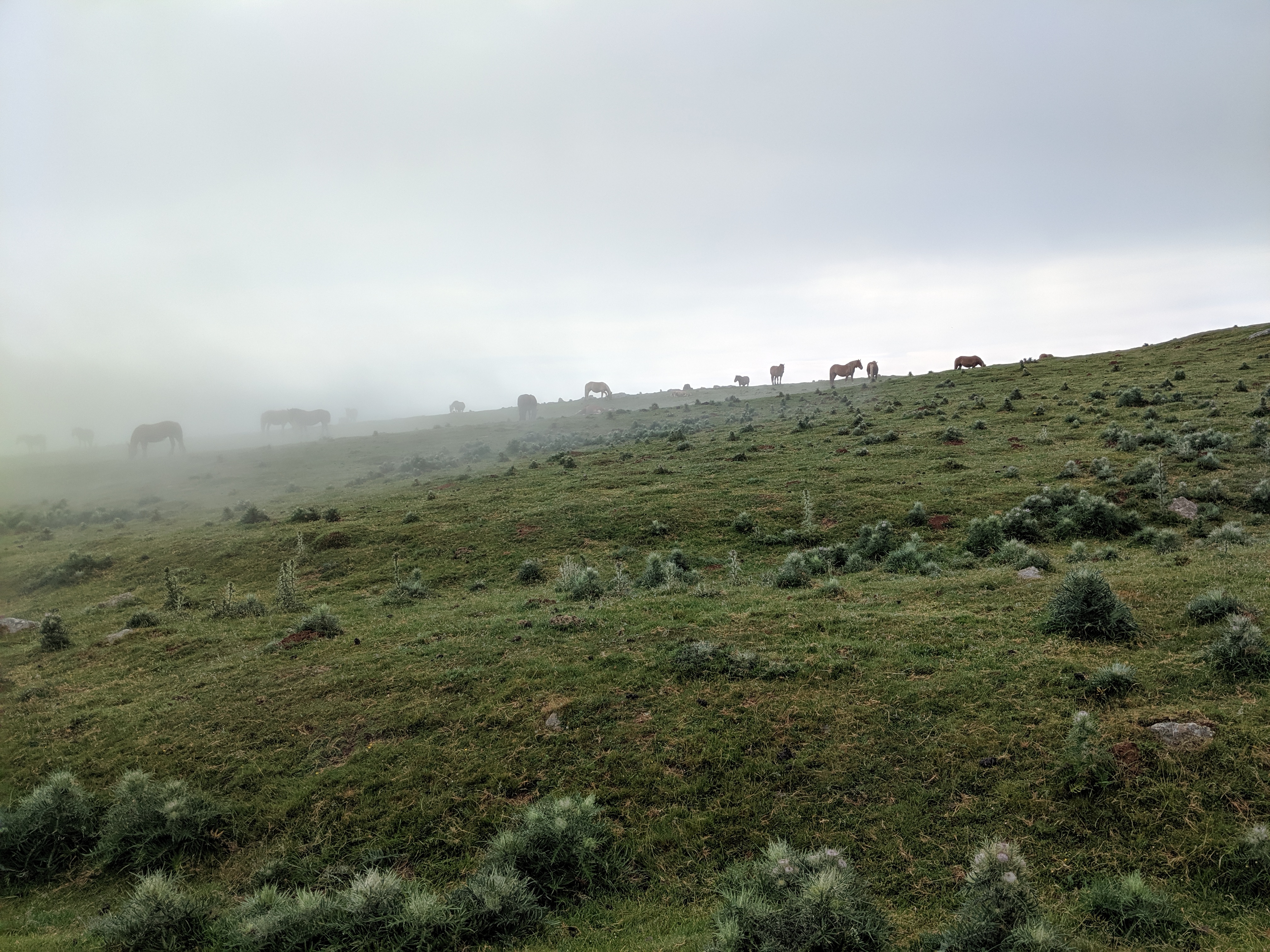 A Gift on Our First Day

They told us the first day of the hike would be the most difficult, as the path takes pilgrims up and over the Pyrenees Mountains while marching on weak, new legs. But for Sam and me, the first day was one of the best because our legs were still new. We felt so excited and such disbelief that we had made it to Spain to fulfill a crazy dream, that every sight left us in a glorious awe, making the pain in our feet of little consequence. As we marched all morning through a thick fog, listening to the distant jingle of sheep that we could not see, we unknowingly reached the peak of the Pyrenees, still blanketed in a damp white cloud. Then, in a matter of seconds, the fog rolled out, surprising Sam and me with incredible views of the mountain we had just conquered and the downhill we were about to pursue. As we watched the wild horses graze on the hill above us, the fog returned just as quickly as it had dissipated, providing us only the slightest glimpse into the wonder and breathtaking world of our journey to come. 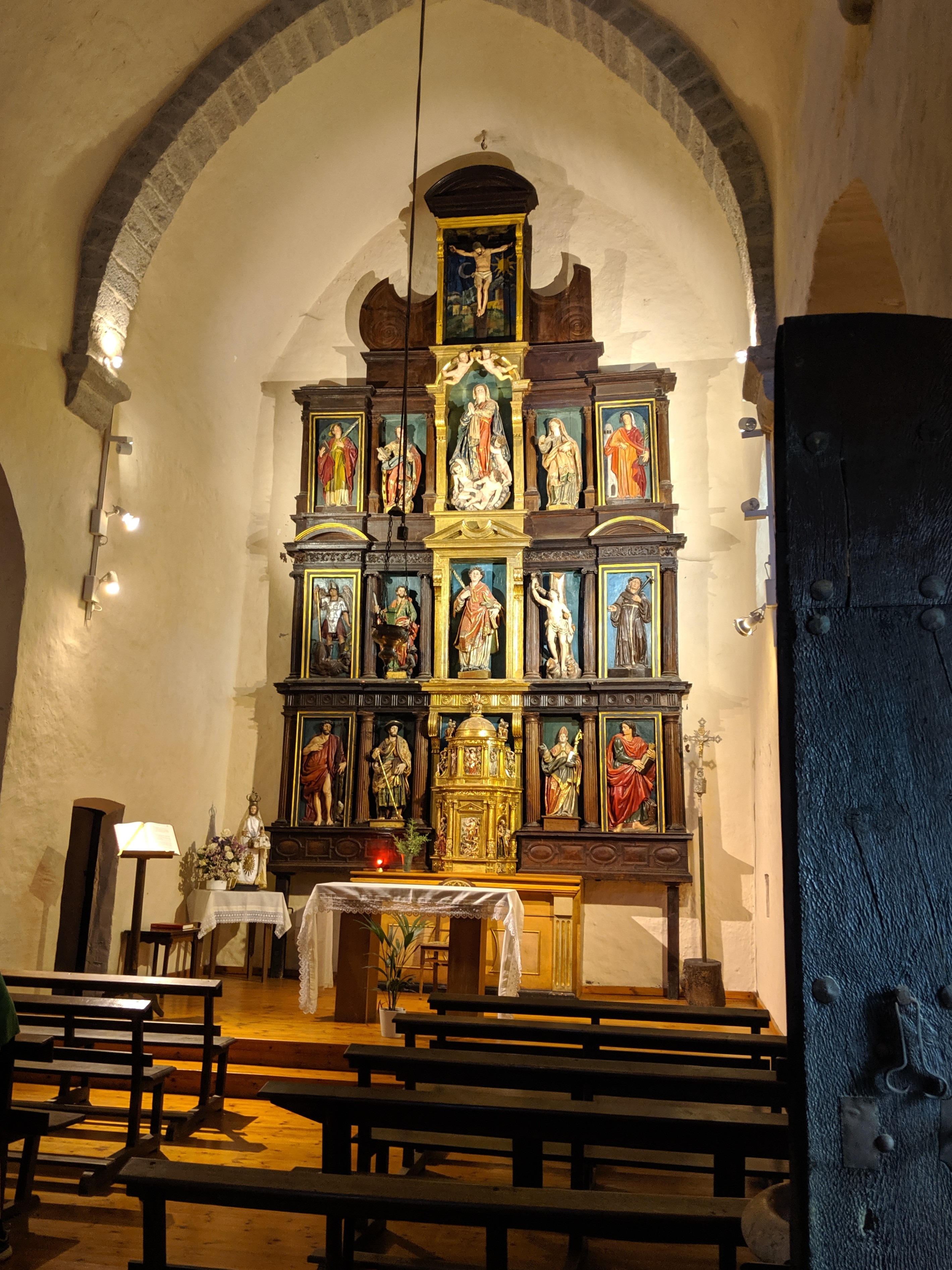 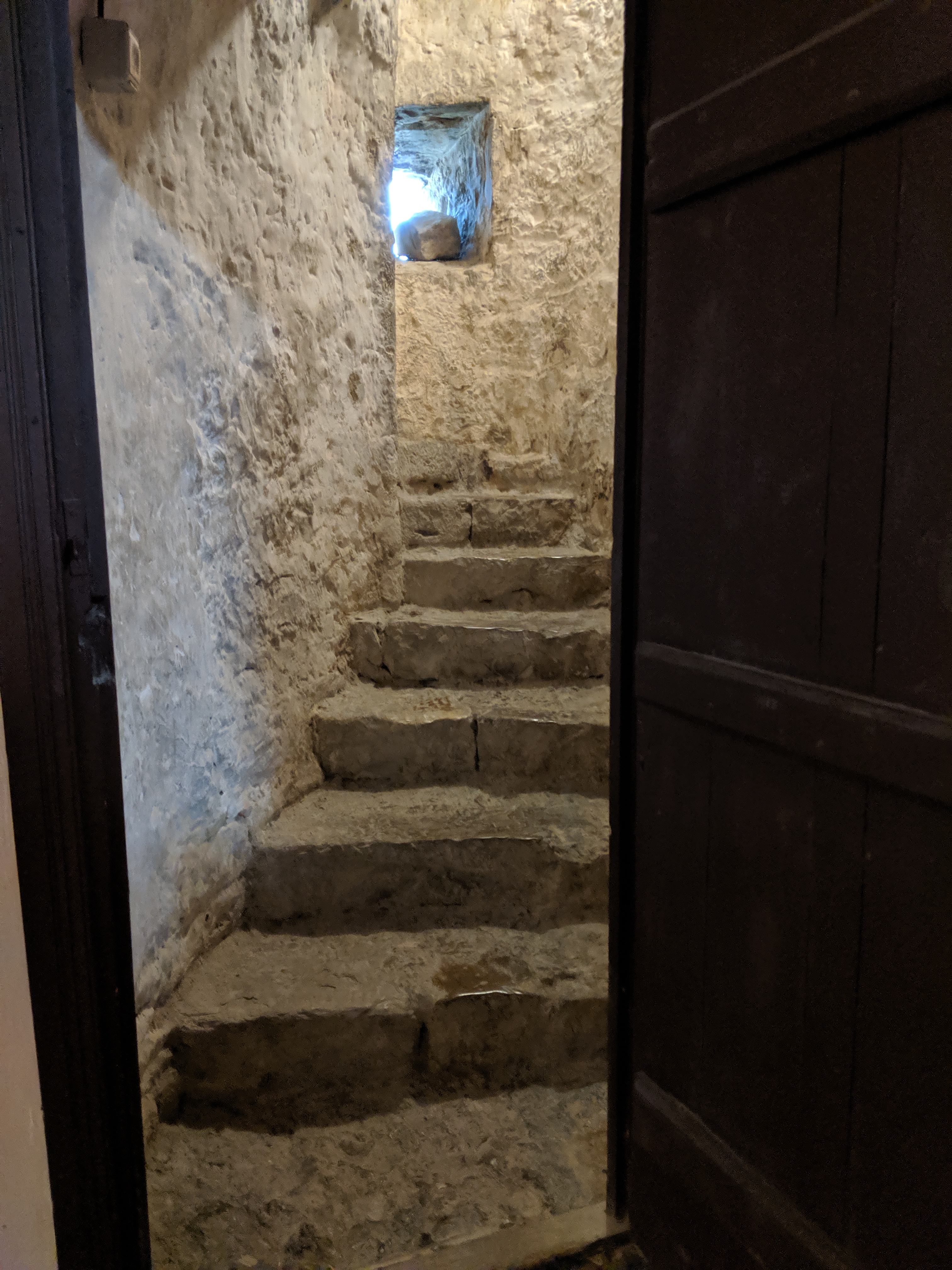 The Beauty of Detours

By now we had been walking for three days, and the aching pain in our legs and feet began affecting our moods. Still two hours away from the day’s destination, we came across a detour… One headed up a steep, shade-less hill. We pondered it for a moment but decided to take the risk. When we reached the top, we discovered the church at Zabaldika, where inside an adorable old Spanish woman waited for pilgrims. Delighted to see us, she shuffled quickly over and offered us a laminated pamphlet in English to read about the church’s history, though she had pamphlets in seemingly every language. She then gestured us towards the pews, where she invited us to pray before the centuries-old altarpiece. When we finished, she directed us up a winding, stone staircase, offering us a darling smile all the while. We were skeptical of the stairs and didn’t understand her Spanish dialect, but when we reached the top, the language she had spoken with her hands suddenly became clear: She wanted us to ring the church bell, dated 1377. When we returned to see her after ringing la campana, she gave us the biggest grin, followed by our sello and a paper with “The Pilgrim’s Beatitudes.” For the rest of our journey, Sam and I read these pilgrim prayers on the hardest days, and we celebrated them when we finally reached Santiago. 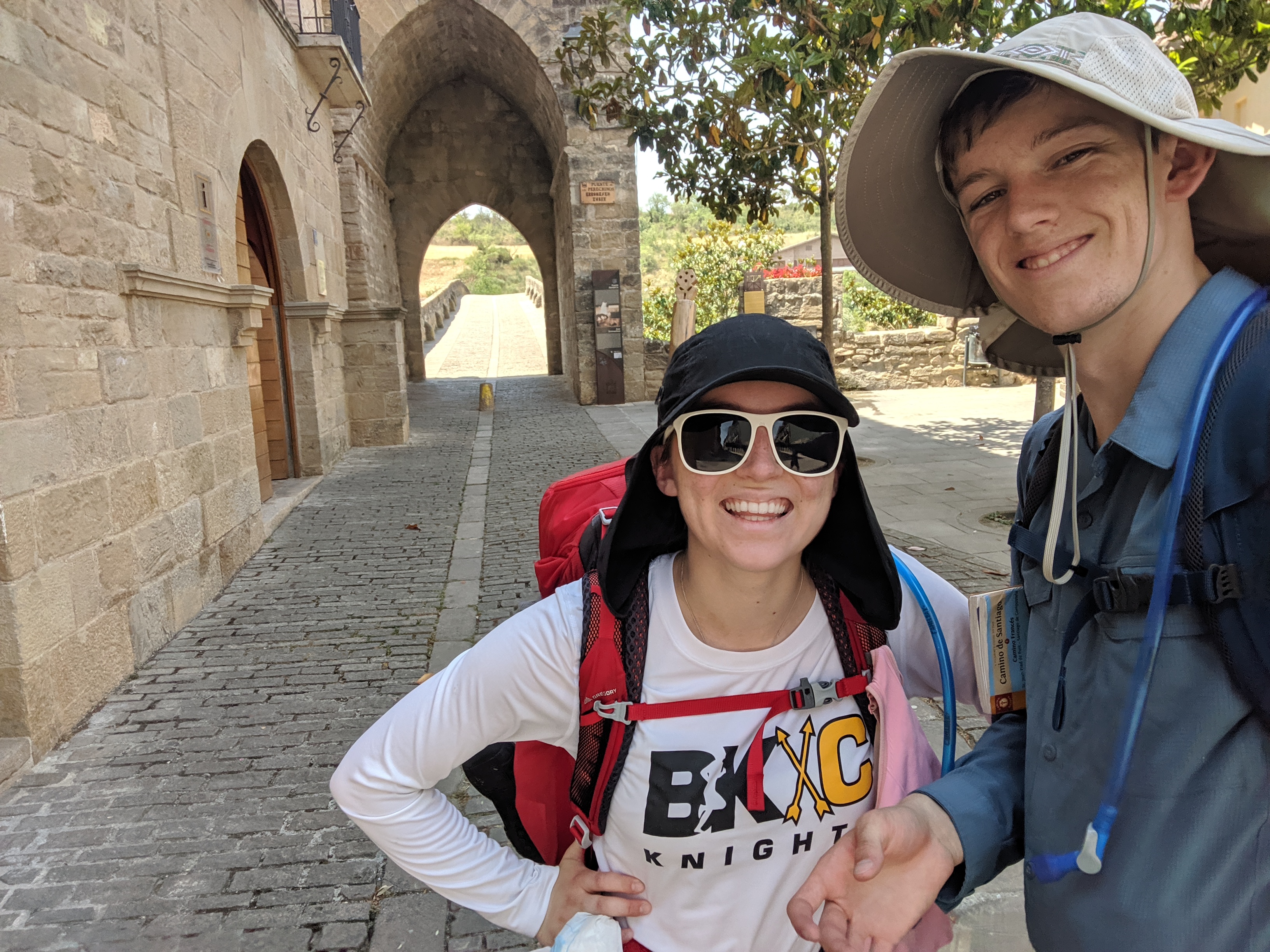 I would be lying if I acted like all days on the Camino were wonderful. Our fourth day was spent trudging through 85+ degree weather, with nobody around to keep us company and very little amenities, including shade. Oh, and did I mention Sam was sick? We were only an hour outside Puente la Reina, our destination for the night, but I worried Sam wouldn’t even make it that far. When we finally reached the town’s edge, we realized, of course, that our hostel was on the complete other end of town… and up a very steep hill. When we eventually arrived, the man told us he had lost our reservation and then stamped my credential in the wrong spot (!!!). To say Sam and I were upset is an understatement. The place smelled like horse dung, there was no hand soap or paper towels in any of the bathrooms, and it was one of the most expensive hostels we stayed in the entire trip. To top it all off, people were slamming doors the entire night, so we didn’t even sleep. I’m sure the town of Puente la Reina is a lovely place, but our memories have irrevocably tainted it. Just look at our fake smiles in the photo above! Pretty convincing, yeah? 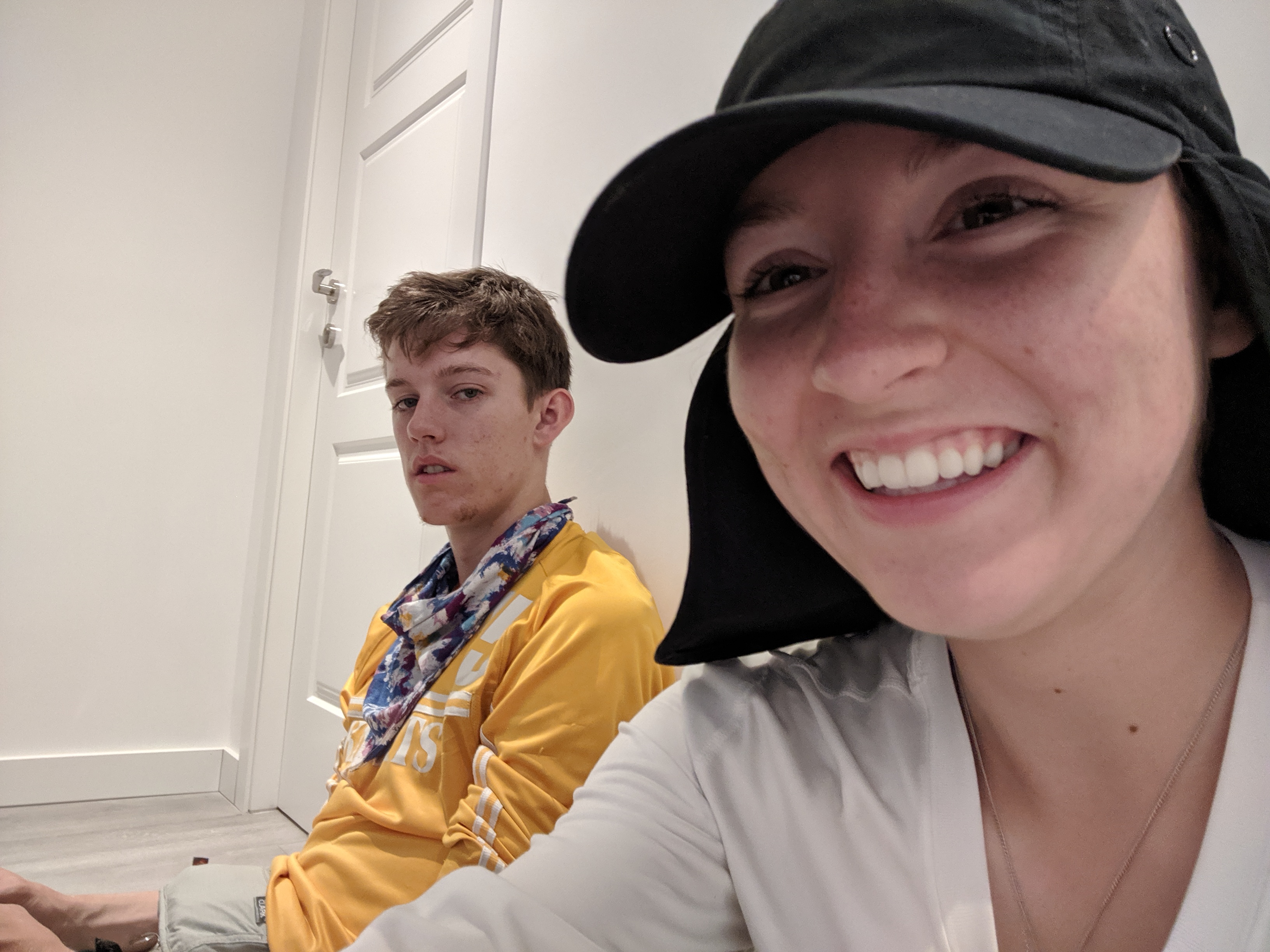 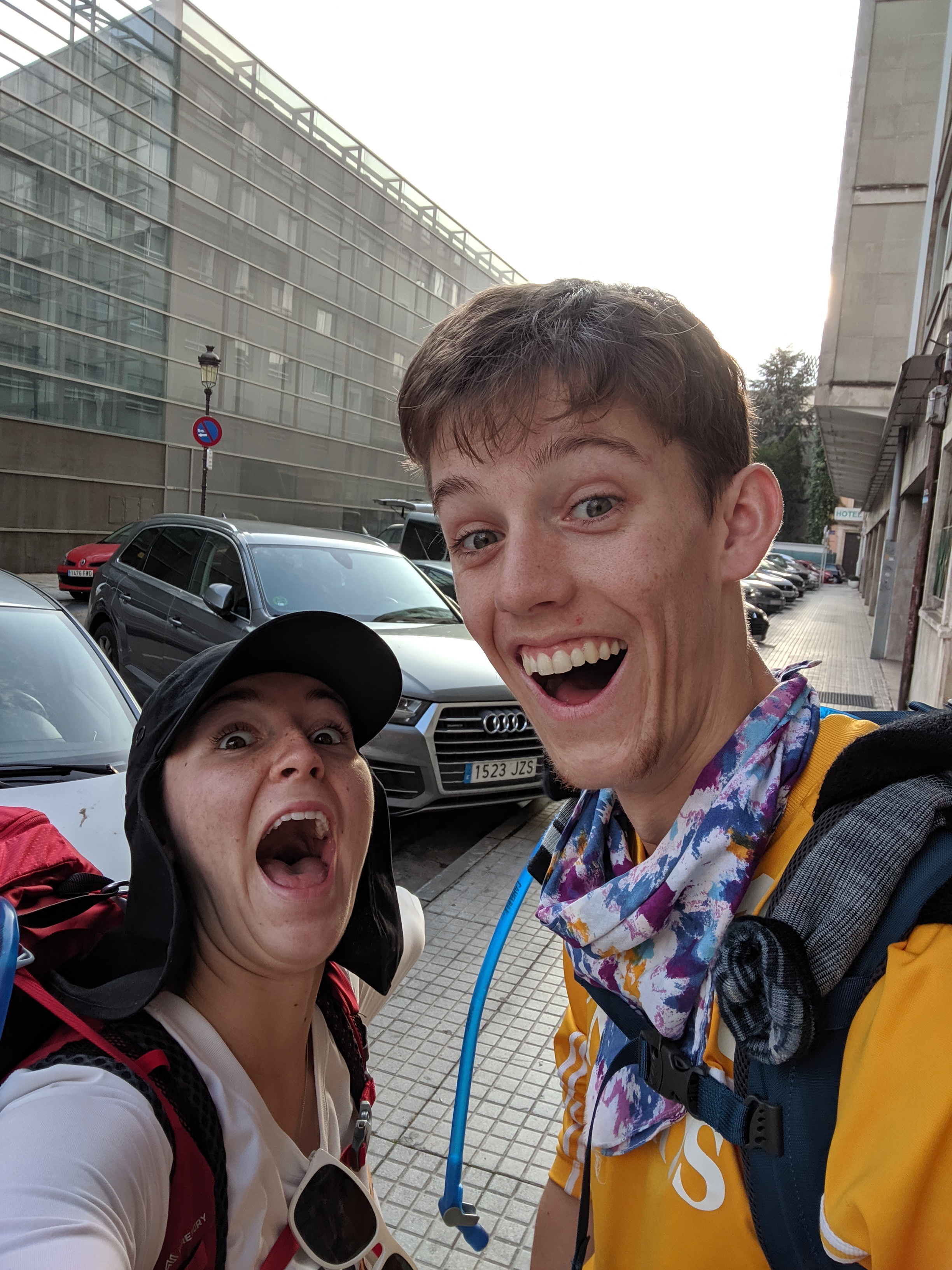 Our second favorite hostel story was when we were locked IN our place… As a preface, Spanish door locks work very differently than American ones. First you have to turn them 5 times to the left, and then 7 times to the right, and then back to the left and hope that the door opens. In Burgos, Sam and I stayed in a nicer hostel with a private room, which was located on the third floor of an apartment building. When we went to leave the next morning at 6:30, we followed the instructions and dropped our room keys into the lockbox next to the front door. We then went to open the front door…only to find it locked, from the outside. The man who works at the front desk wasn’t supposed to arrive until 8, so we spent an hour and a half trying to pick the lock, fish the keys from the lockbox, and make *just enough* noise to “accidentally” wake up the other residents. But to no avail. At 8:05, we heard the lock struggling to move, and the second the man walked in, his face completely fell. “How long…?” is all he asked because he knew exactly what had happened. Clearly we weren’t the first people to be locked in! Sam’s face in the first photo shows just how unamused he felt, but I was able to embrace the true “Camino spirit” and laugh about the experience. The second photo is when we were finally freed. *Cue Mel Gibson’s famous line in Braveheart.* 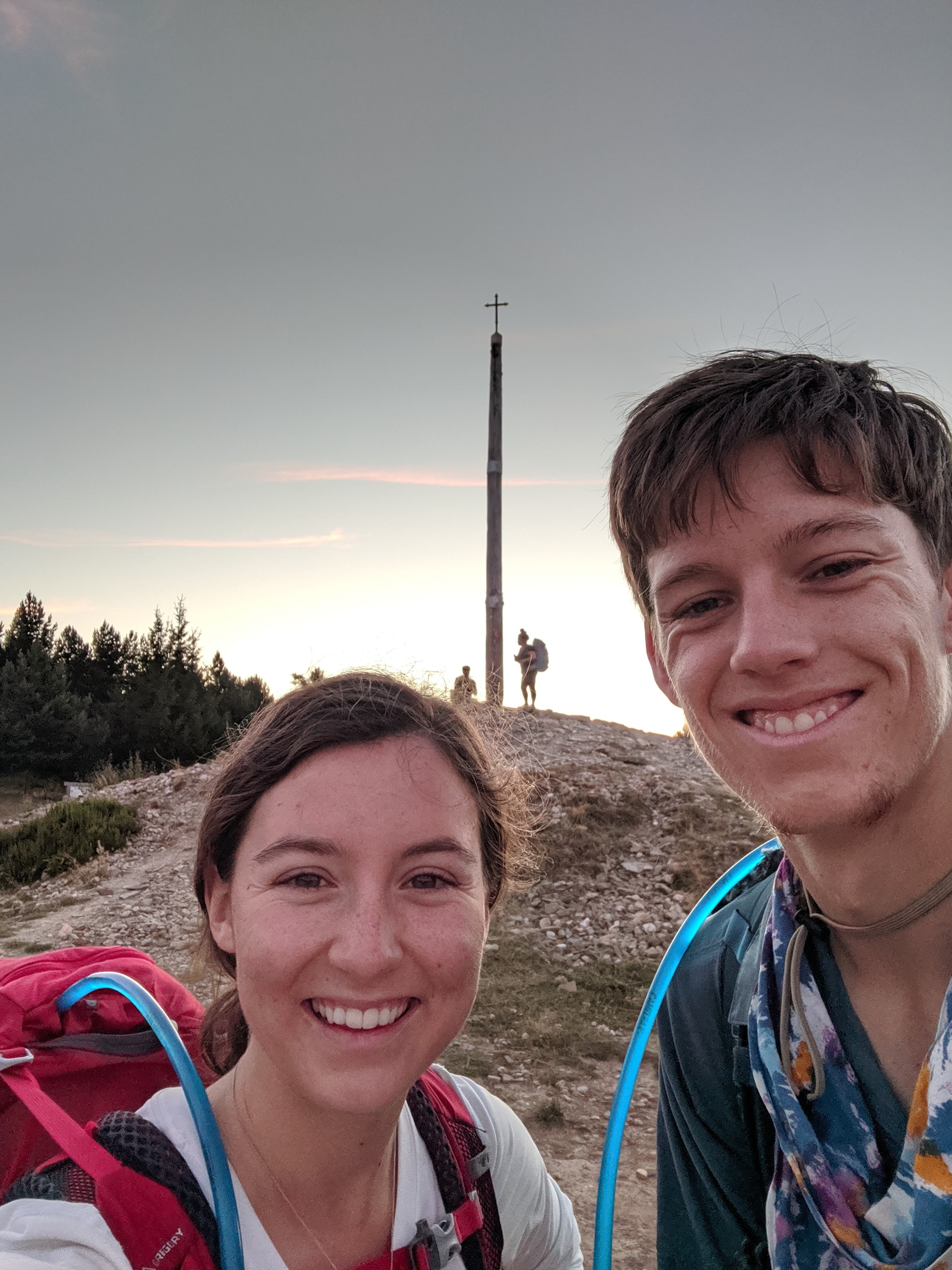 We had been hearing about the Cruz de Fero for almost the entire Camino. Located 8 days from Santiago, it is where pilgrims place a stone from their home country, leaving with it all the metaphorical weight and hardships they have been carrying along their journey. Sam and I didn’t get the memo that we were supposed to bring a rock from home, but we still looked forward to a spiritual experience at the cross. We woke up at 5 am to walk an hour and a half just to see it at sunrise. It was a long hike in the total blackness of the wilderness; I was openly afraid, while Sam pretended not to be scared of whatever creatures lurked in the dark. But when we arrived at the Cruz de Fero, we knew our night crawl was worth it because our timing could not have been more perfect. We left our offerings at the foot of the cross as the sun peered over the horizon, and then we ate our breakfast as it continued to rise gloriously behind the hill. Our Brazilian friend came to meet us on the other side, and with tears in her eyes and a light chuckle, she said, “I have been born again,” and that’s exactly how it felt. 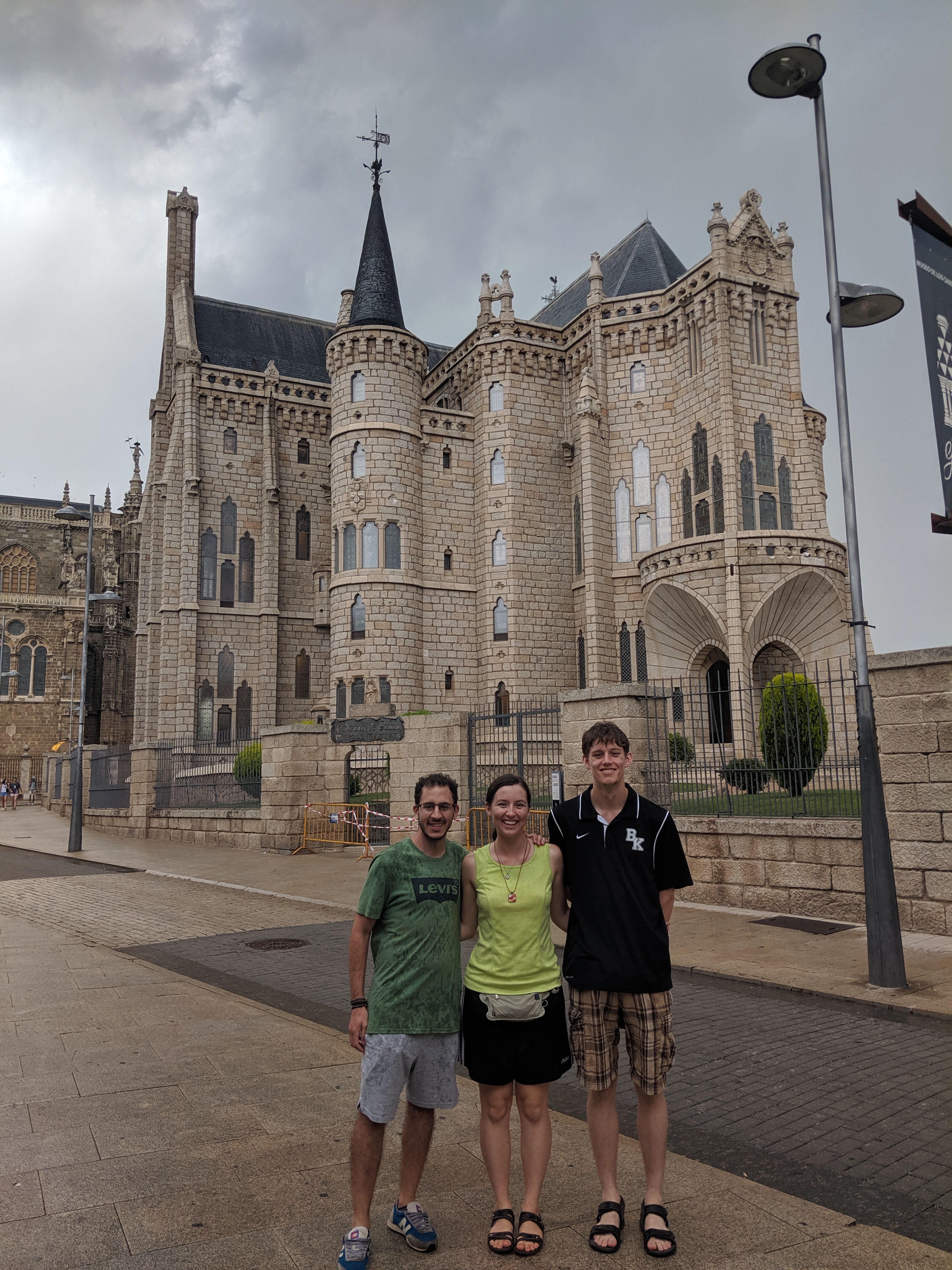 I briefly mentioned my friend Victor in my last Camino post, but now I get to tell the whole story. I actually met Victor playing soccer…in Colorado. We were on the same intramural soccer team for my college! One day before a game, we warmed up together and I mentioned something about wanting to go to Spain over the summer. He told me he was a foreign exchange student from Astorga, and after that, we were fast friends, meeting for coffee and ice cream to talk about all things Camino and to practice my Spanish. When I arrived in Spain, we counted the days until I would walk into his town. First I saw Victor in the city of Leon, where he gave us a tour of downtown and took us to a restaurant and bar for traditional Spanish cuisine. Two days later, when Sam and I arrived in his hometown of Astorga, he insisted we come to his house for lunch. We spent the afternoon with Victor’s family, all of whom only spoke Spanish, and ate plate after plate of delicious traditional food. Sam did quite well practicing his Spanish; I didn’t do nearly as well, but regardless, the language barrier couldn’t diminish the absolute kindness we felt from Victor’s family. After lunch, Victor and his awesome friend gave us a private tour of Astorga, which is full of a rich history I would have known nothing about had it not been for the tour. Experiencing true Spanish hospitality through Victor’s family and friend was a gift most pilgrims never receive, so I am so blessed for this friendship and that we continued it while abroad. Even though Victor is back in Spain now, we talk daily, and I have my fingers crossed that he’ll return to the States someday! 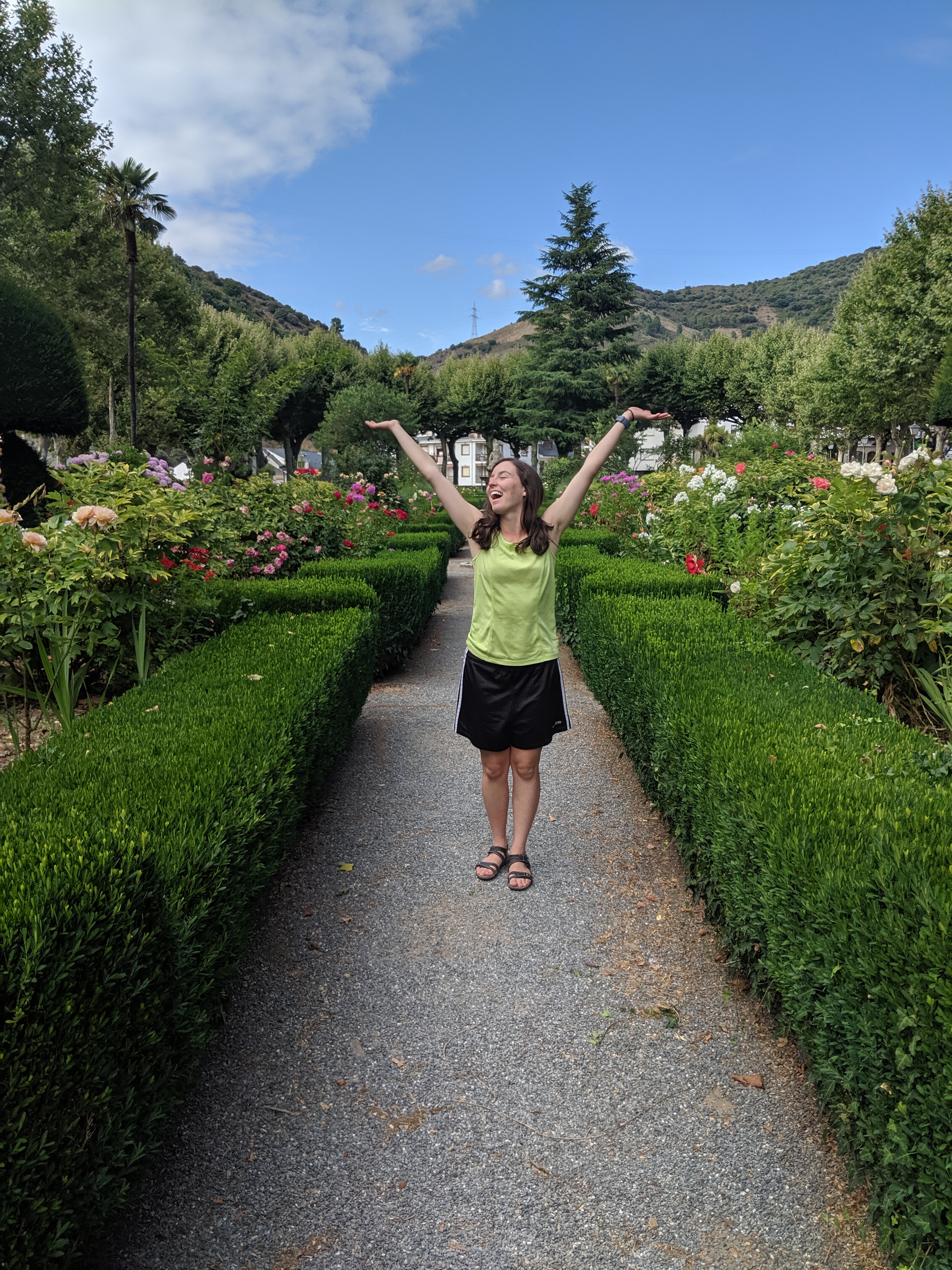 I hope you liked hearing these stories. Of course, there are so many more, but these are just a few of my favorites. Only one post left in this series!—The Lessons I Learned. Stay tuned for that in the coming weeks, and if you missed it, here are the first two posts again:

My next blog post is going live on Wednesday instead of Thursday of this week, as I am doing a collaboration post on rocking animal prints for fall. See you then, and have a great Monday!