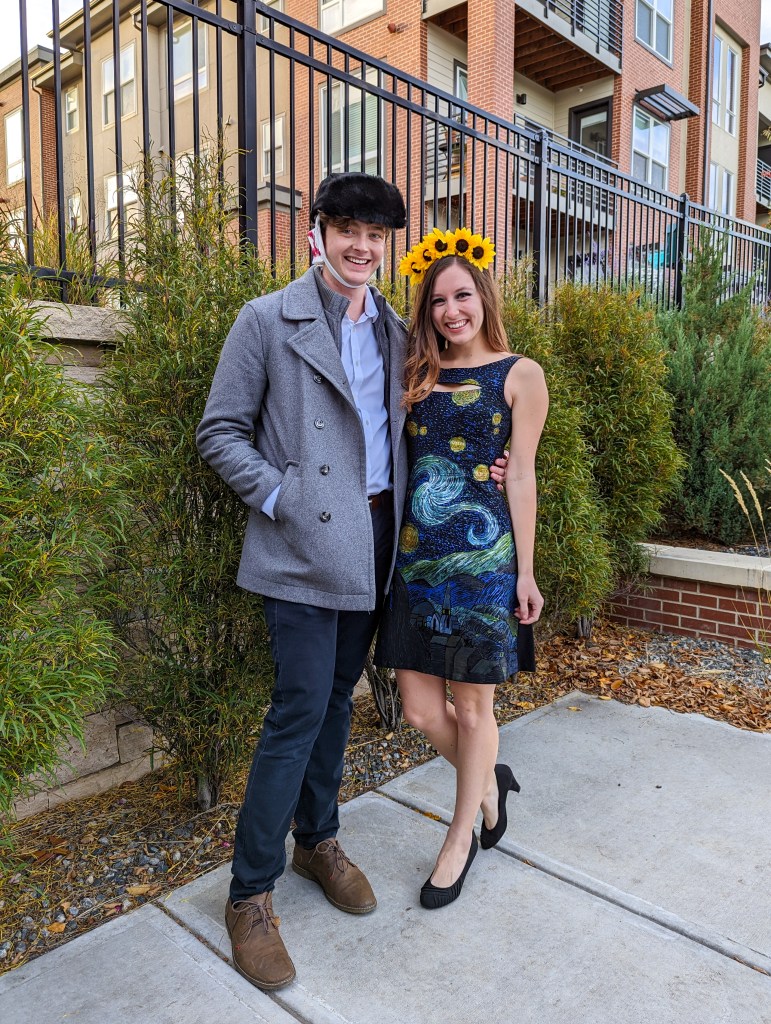 Happy (early) Halloween! As much as I love costumes and dressing up, I’ve never been the type to preemptively dress up and share photos of costumes for the sake of providing inspiration. I know, I know, that doesn’t make me a very good blogger… But to be honest, I’m too lazy to put on an entire costume (makeup and face paint included) to take photos, just to have to do it again in a few weeks for the actual Halloween party… So, here we are. Posting this year’s couples costume after Halloween weekend, hoping it’ll at least provide some inspiration for next year. 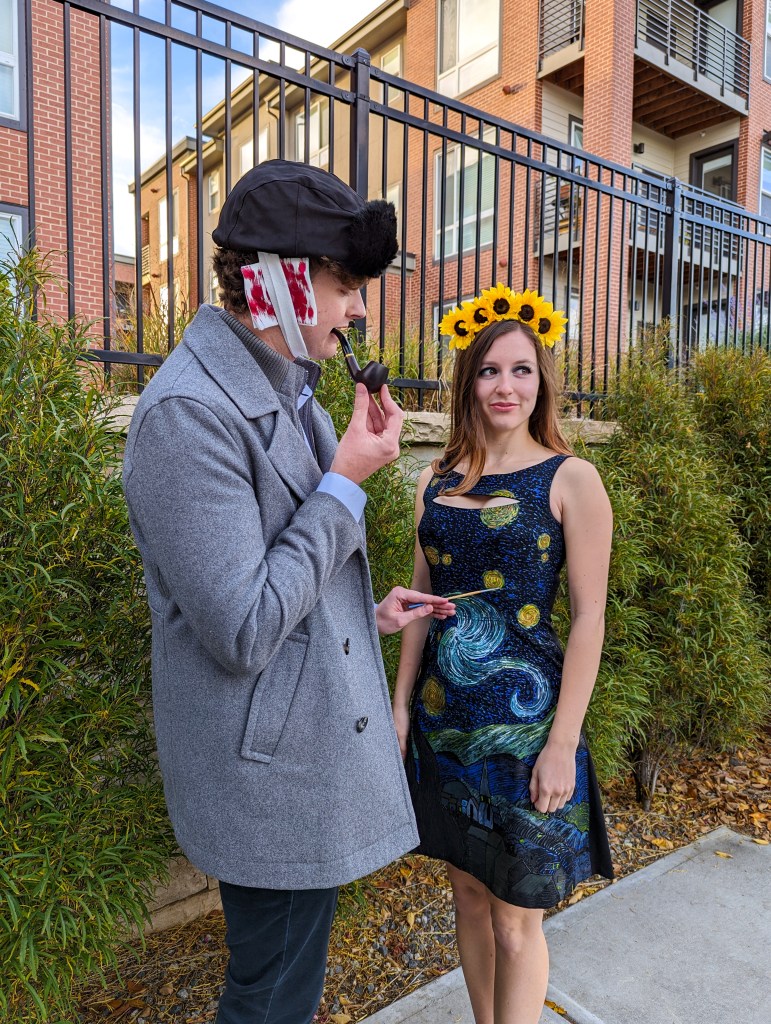 I’ve never done a couples costume before and was so excited my boyfriend was willing to do this one with me! I saw the idea on Pinterest and thought it was so unique—I immediately knew I had to try it for myself.

I started by thrifting the dress when I was in Las Vegas at the end of last month. It was $22, which is kind of expensive for something secondhand that I would just be using for a costume, but I really liked the silhouette… a pretty A-line shape with a unique cutout around the cleavage area. There were cheaper black dresses that I tried on, but they either didn’t fit as well, had a textured fabric (which I didn’t want because I thought it might make the painting process more difficult), or were a midi/maxi style, which would require way more effort to paint than I wanted. In the single reference photo I had, the woman was wearing a sleek, slim-fitting dress (it fit like a pencil skirt—what is the dress equivalent of a pencil skirt??). The sleeker shape probably would have been better, but I figured the A-line of my dress would work well enough. 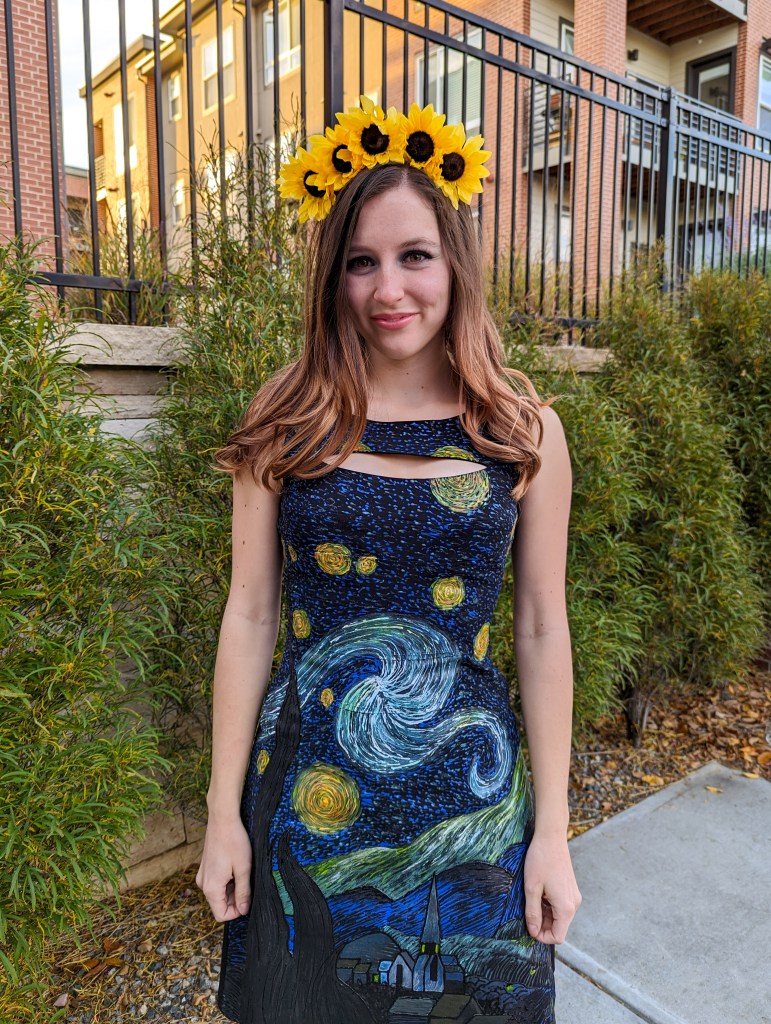 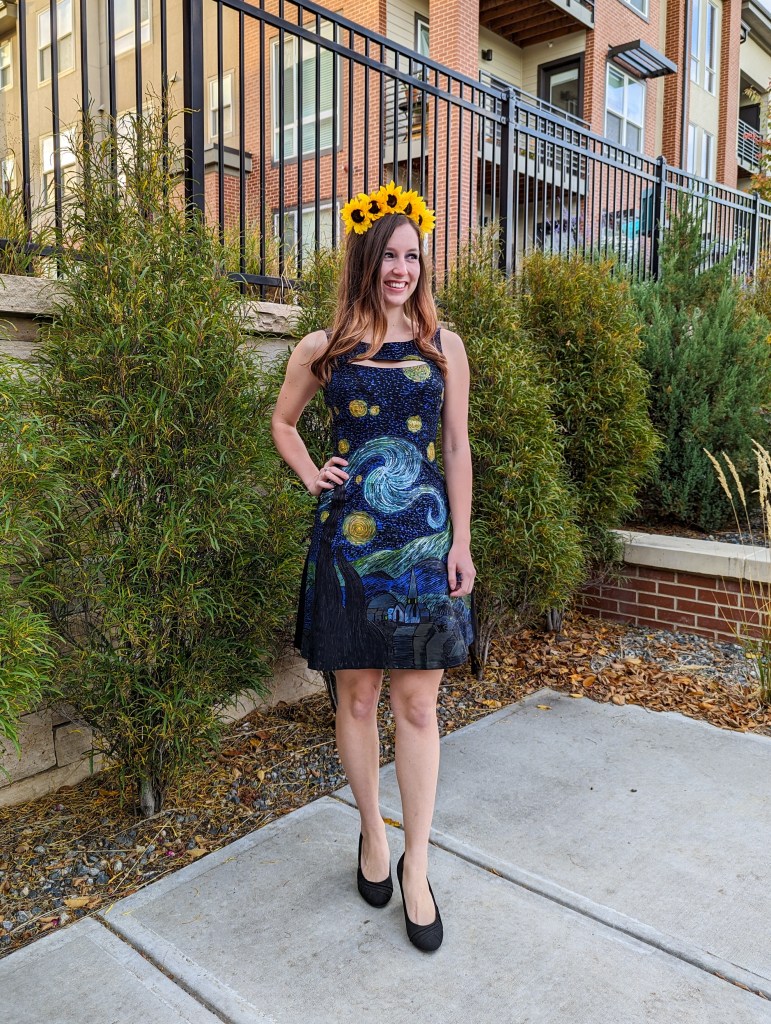 I stopped at JoAnn’s to buy generic fabric paint in yellow, orange, white, light blue, dark blue, black, and glow-in-the-dark. In hindsight, I could have done without the glow-in-the-dark paint—it didn’t really work. And the yellow and light blue didn’t show up very well on the black fabric (the yellow looked more greenish, so I ended up mixing the orange paint with it for a more natural hue). I also picked up a few discounted sunflowers for the headpiece.

In total, I spent $21 at the craft store. When you include the dress, that made the costume’s price $43—definitely more expensive than I would have liked, but when you think of how pricey storebought costumes have become, it’s pretty reasonable. 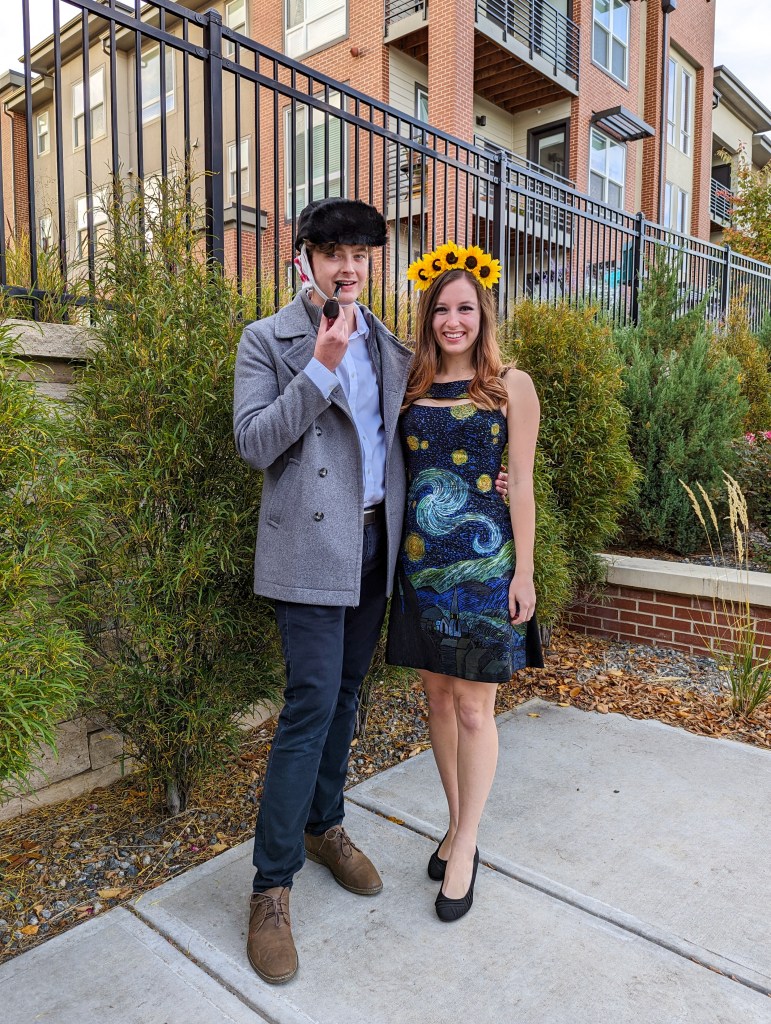 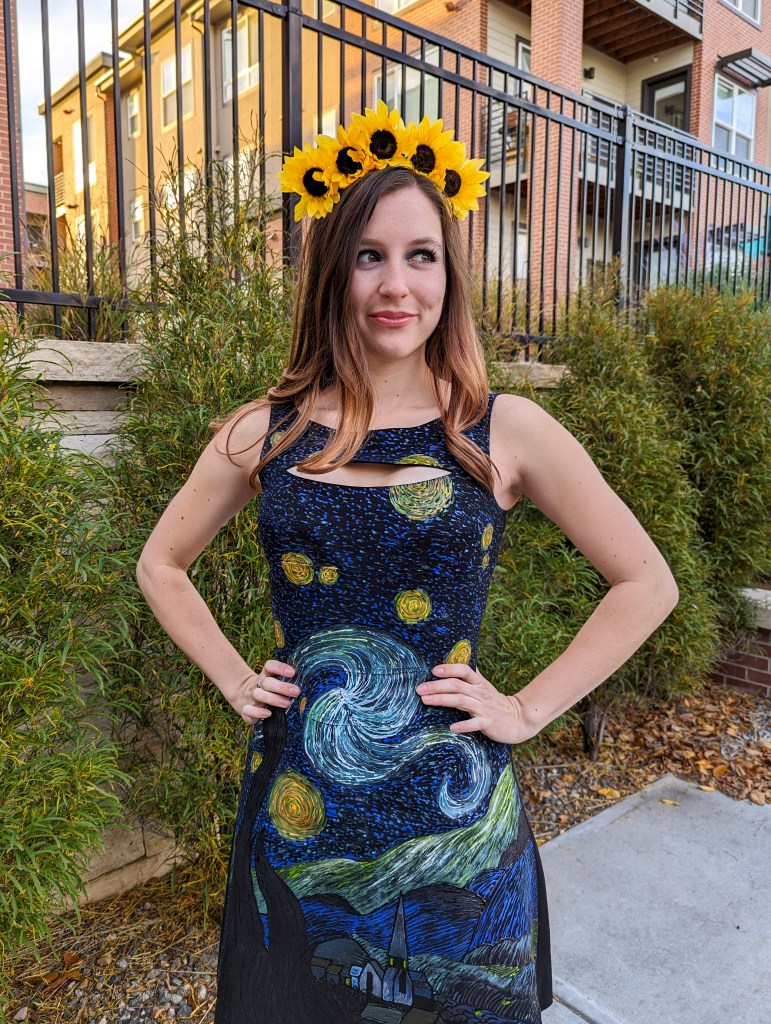 In true Grace fashion, I didn’t start painting my dress until about a week ago… so it was a little bit of a time crunch. I’m really pleased with how it turned out, though. I didn’t do any preliminary sketches, but my first step was to paint some of the basic outlines and shapes—the big swirl, the stars, the black things, and some of the houses in the lower part of the painting. What really made the dress come to life was all the final layers of paint I added on Friday—more colors and details in the bottom third, more dashes throughout the sky, streaks of orange in the stars, and thick black outlines around all the houses. The bottom third was definitely the most difficult part to paint because it’s hard to tell what is depicted in the actual painting… I ended up just winging a bunch of shapes and textures that looked somewhat like the real work of art. The only thing I would have changed is adding some lighter streaks and white dots throughout the sky so that the big swirl is not such a stark contrast—I think that would be more accurate to the Starry Night.

All in all, I would guess the dress took me about 10 hours to paint, spending an hour or two working on it each day this past week. If DIY-ing isn’t your thing or if you don’t have the time, you could also just buy a Starry Night dress like this one, this one, or this one to make it easy. I had a great time painting my piece, though! And it was fun to be able to tell people I made it myself. 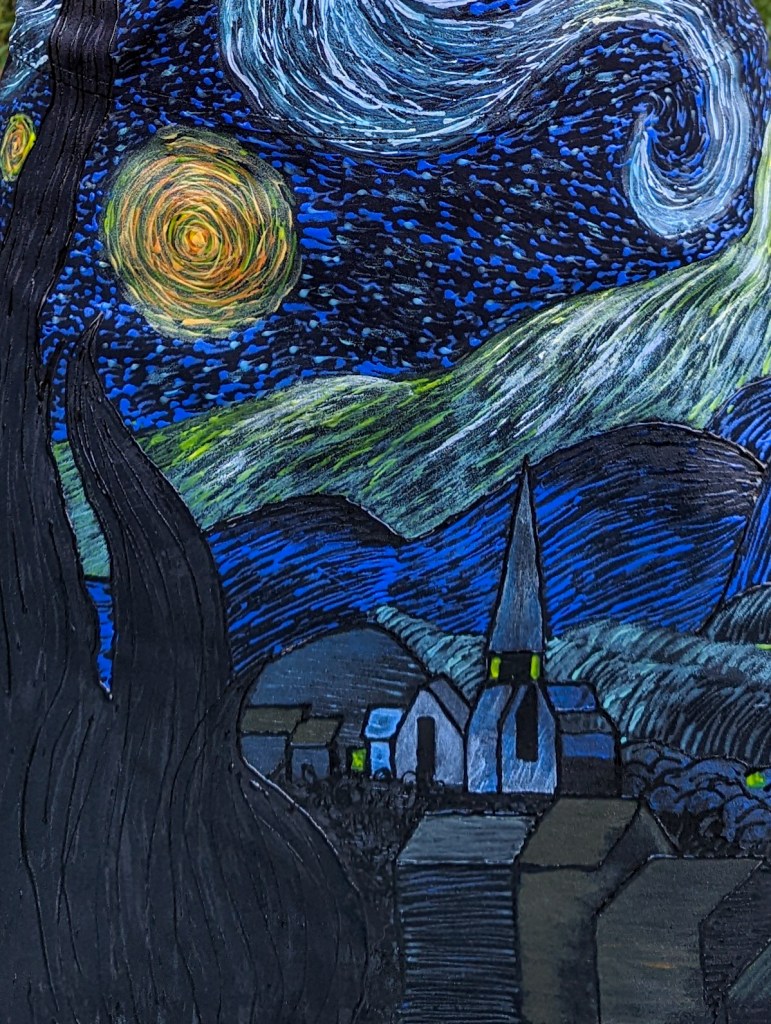 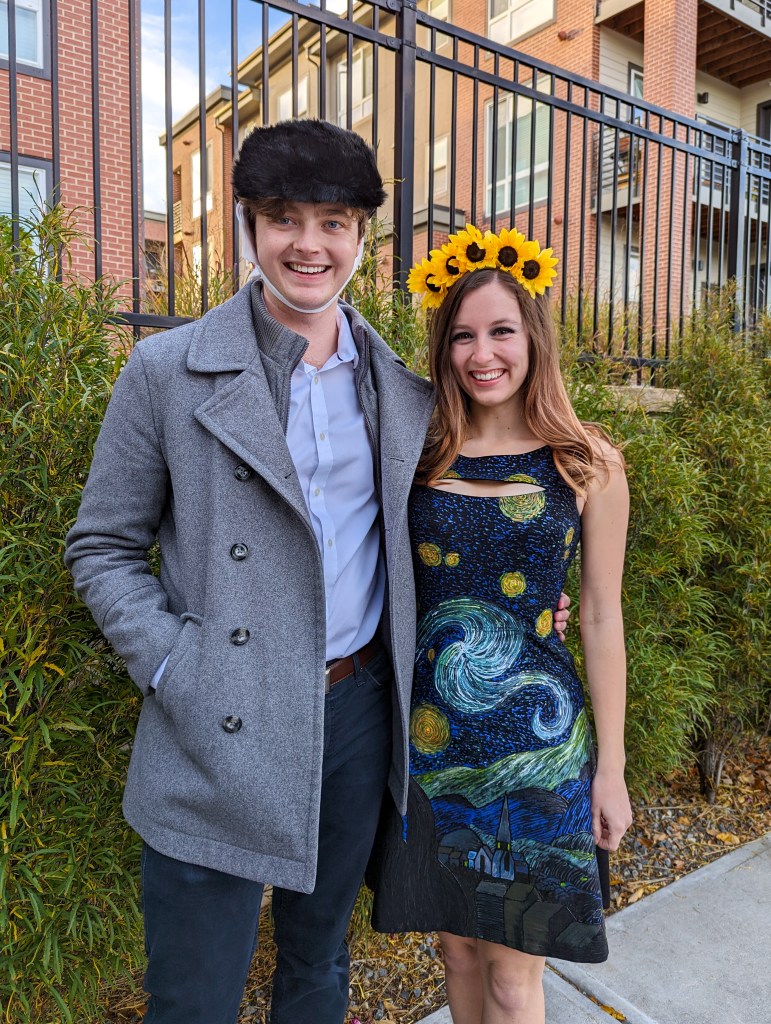 I topped the outfit off with blue eyeshadow, thick eyeliner, a neutral lip, and my sunflower headpiece! Which I made just minutes before last night’s party… lol. Originally I glued the flowers to a strip of ribbon to make a headband, but then it looked like the flowers were pointing up rather than forward. I ended up taking a piece of cardboard, folding it in half, gluing the flowers on the front half, and pinning the bottom half to my head. That worked much better to make a flower crown where the sunflowers are facing the camera.

As for my boyfriend’s Vincent Van Gogh costume, it was quite easy! He wore a white button-down, black pants, and a peacoat that he already owned. All he had to purchase was the hat and the pipe, both of which he ordered on Amazon. He cut the ear flaps off the ushanka hat to mimic this Van Gogh self-portrait. Then he topped the outfit off with bloody gauze over his ear (made with red dye). The only thing missing is a beard, which he considered growing out for the occasion! 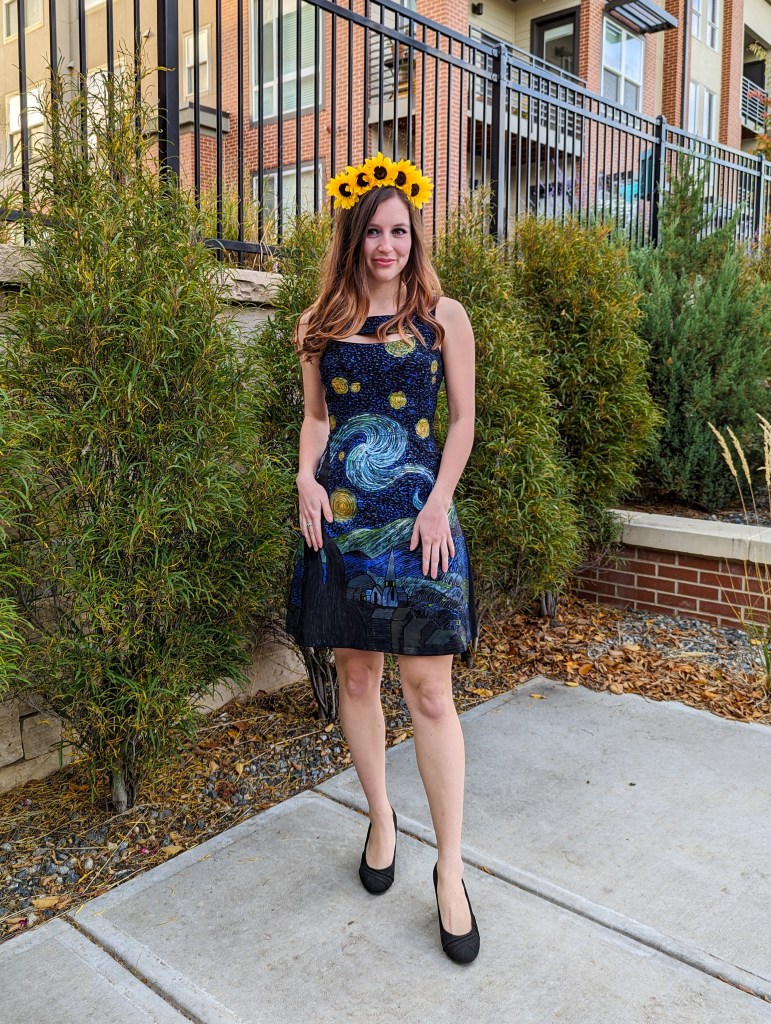 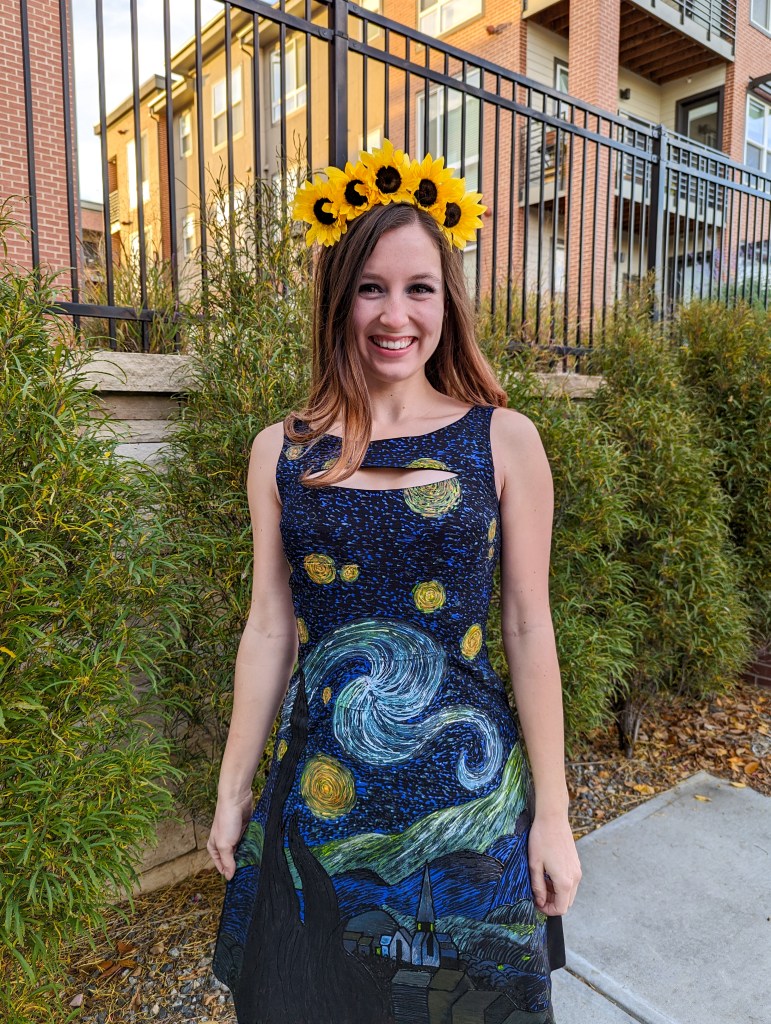 It was such a fun costume, and we got tons of compliments. Every now and again someone didn’t know who my boyfriend was dressed as, so I would run across the room and stand next to him—then they would put two and two together. In the original inspiration photo, both the woman and the man had face paint to look like impressionist brushstrokes on their face and chest. This would have been a fun touch, but I was pressed for time getting ready (like always) and decided to go without. 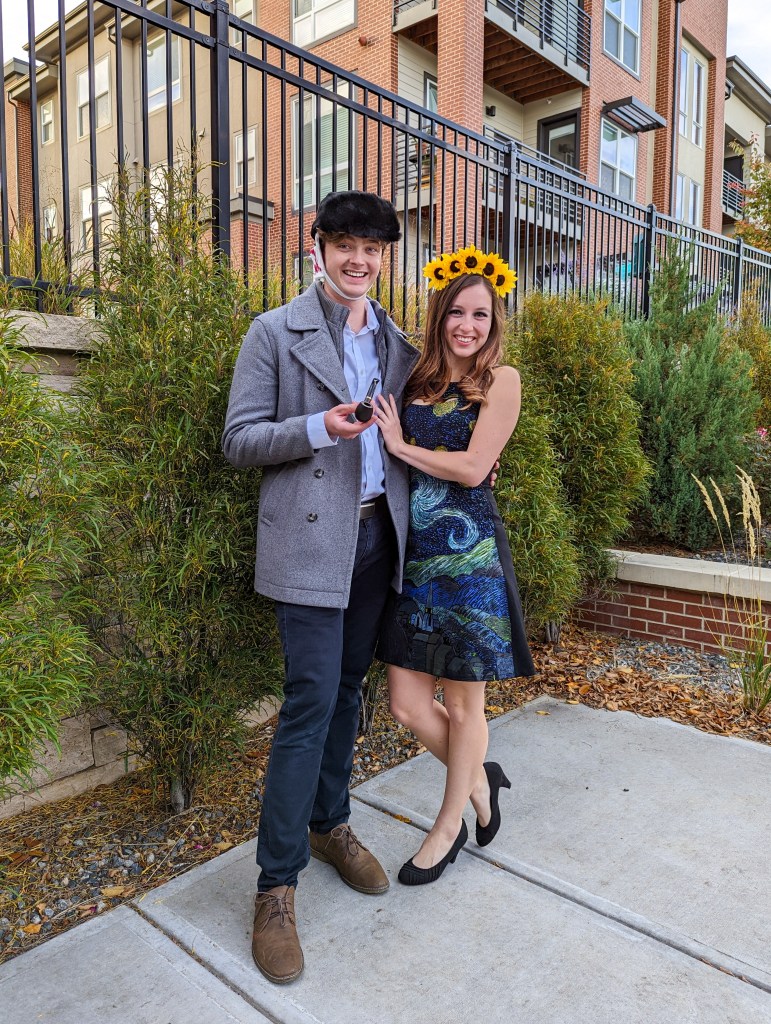 Did you dress up at all this weekend? What’s your favorite couples costume you’ve ever seen? I love seeing everyone’s costume posts on social media right now… so many creative looks! As always, thanks for stopping by the blog today.