Take Me to the Disco 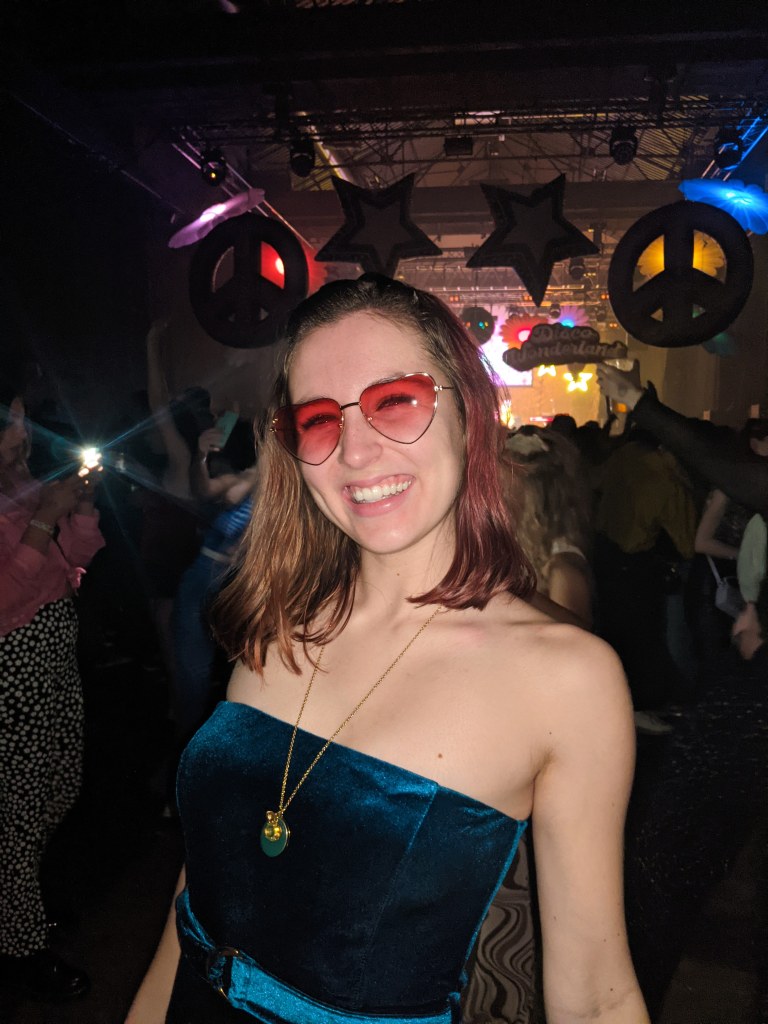 You may remember me talking about an ABBA disco I attended several weeks back. Wellll, with this and that, I somehow forgot to share the photos of my outfit! I attended the event with my friend, and while it was advertised as an ABBA/70s disco, I didn’t really know what to expect… but they did say to wear your best 70s attire for the sake of a costume contest! So of course, I immediately started hunting for something groovy to wear. 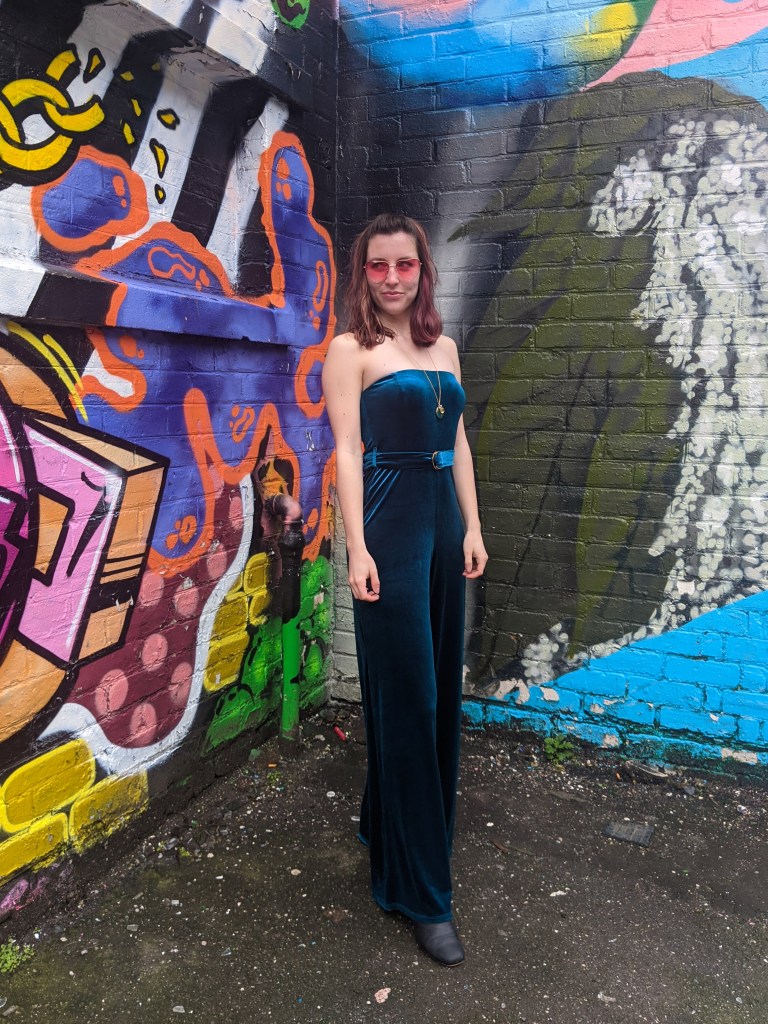 My friend and I scoured every thrift shop close to campus. We were torn between doing the casual 70s chic look (big floral patterns, bell bottom jeans, overalls, etc.) or the glam ABBA look (sequin jumpsuits, go-go boots, you get the gist). In the end, we were at the mercy of the charity shop inventory.

My friend opted for the casual look, wearing the cutest pink and orange floral top underneath a denim overall dress. However, I couldn’t find anything in the thrift stores near campus, and the date of the event was fast approaching… I ultimately just happened into a charity shop in Aberdeen, on the East Coast of Scotland, during one of my day trips. I stumbled across this teal velour jumpsuit and knew it was perfect! 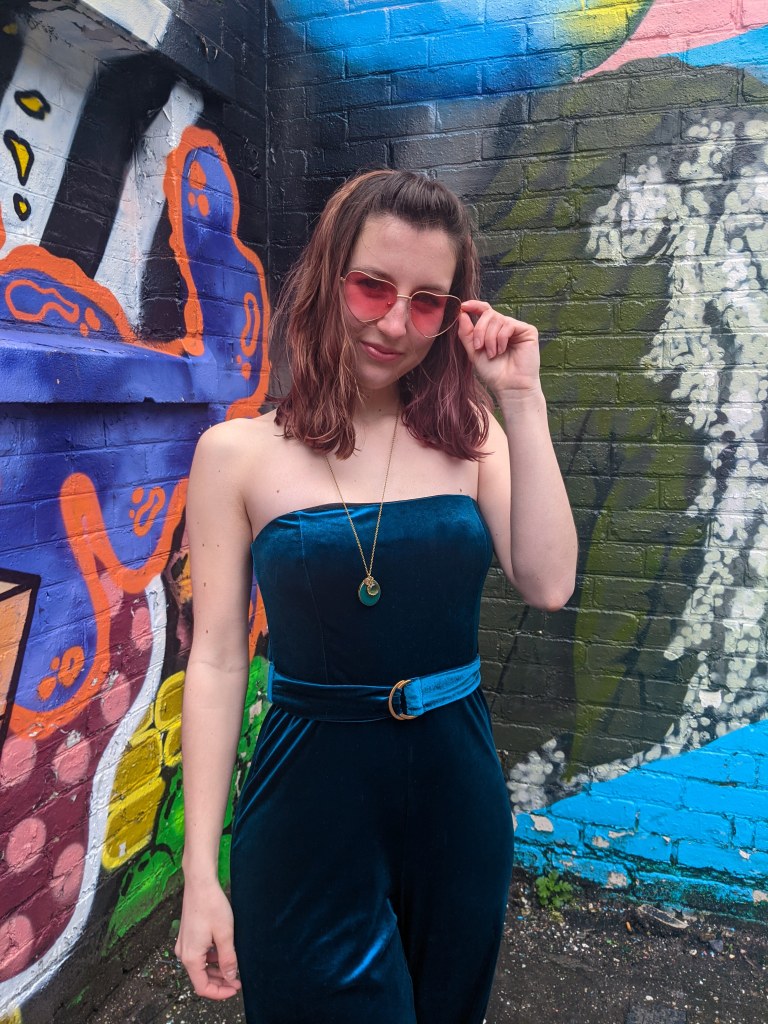 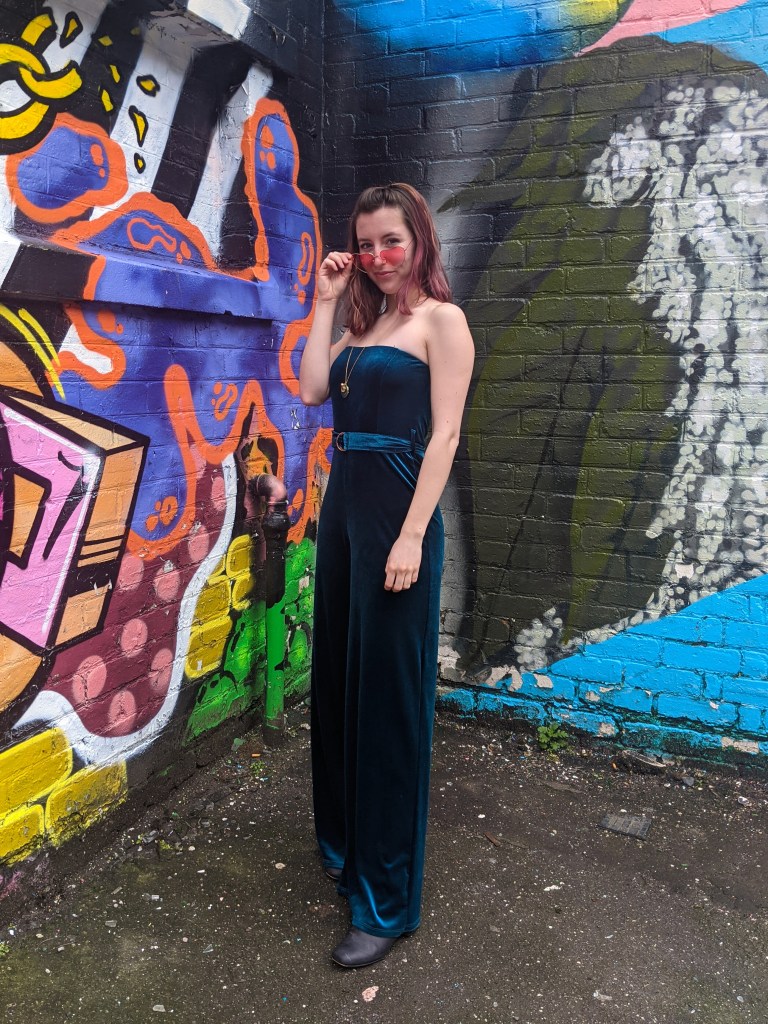 Well, maybe ‘perfect’ is an exaggeration. I actually hate strapless items. I think they’re super cute, of course, but just terribly impractical. Personally, I don’t have big enough boobs to hold a strapless item up. I also think most girls are too timid to pull them off—if you’re going to wear a strapless dress or top, you have to stand tall with your shoulders back. So often, they hunch their shoulders (I assume because they’re worried about the item falling off) and then spend the whole night tugging the top up. Not attractive! That description was basically the high school prom fashion scene in a nutshell.

I’m not going to pretend I was not also guilty of this. I was hesitant to buy this jumpsuit solely because it was strapless, but I was kind out of options at that point… I considered different ways to add support to the piece, like possibly sewing on ribbon straps (with what sewing materials, you may ask? Good question). If I had packed a strapless bra with me, I think the jumpsuit would have stayed up much better, as it was a little large in the chest. But alas, I intentionally did not bring any clothing items to Scotland that would require a strapless bra… so I had to go braless (another thing I hate).

I ended up ordering this fashion tape from Amazon UK (I couldn’t find the same product on the US Amazon). I admittedly had to tug on my jumpsuit a few times throughout the night, though I tried to avoid doing that… I also did my best to stand up straight, a habit I should be working on anyways. At first, I thought the fashion tape hadn’t worked very well. However, the morning after the disco, I put my outfit back on (sans tape) to take these pics, and the jumpsuit shifted around way more. So clearly, the tape did make a difference! 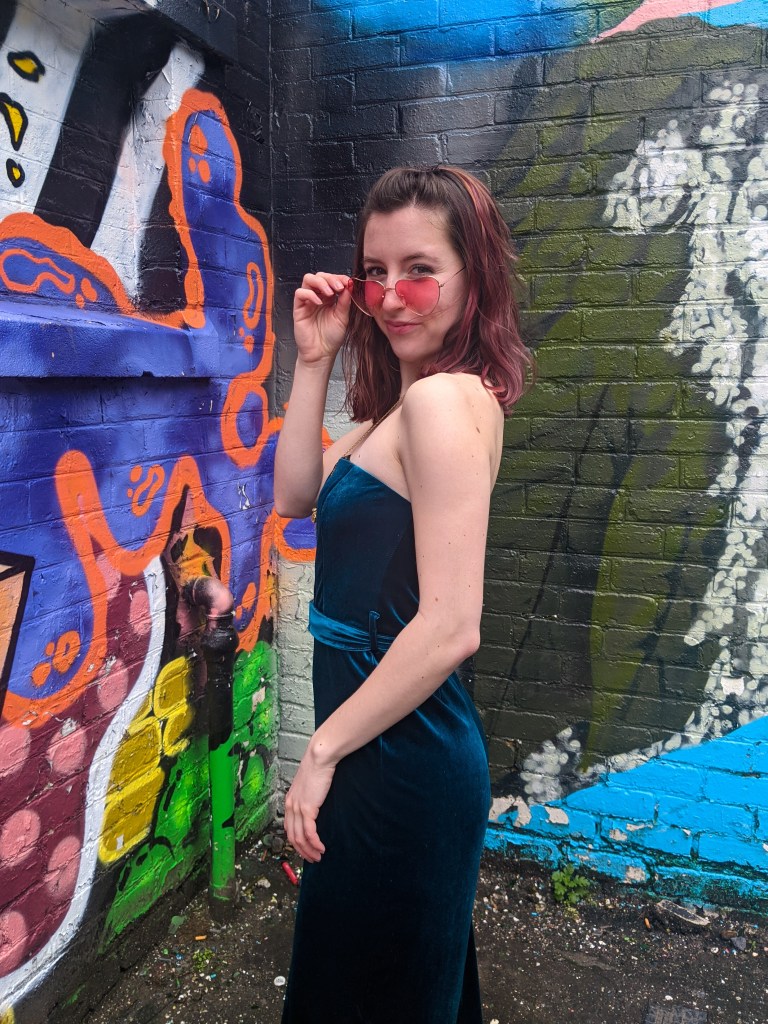 My jumpsuit needed some sort of accessorizing, so I ordered my friend and me these cheap heart sunglasses. I think they were the perfect addition to the outfit, and we looked so cute matching! I also added my favorite pendant necklace after tying a little knot in the back of it so that it would hang higher on my chest. In a perfect world, where I would have had my full wardrobe to choose from, I most likely would have worn my silver block heels with this outfit. Instead, I had to wear my tall black boots because they were the best option I had here in Scotland, and I didn’t want to thrift fancy heels just for this one night. I also think this look would have been so 70s if I had a psychedelically-patterned hair scarf to tie around my forehead! I still felt really cute given the materials available to me, but I know I could really take this look over the top if I ever attend another disco in the future. 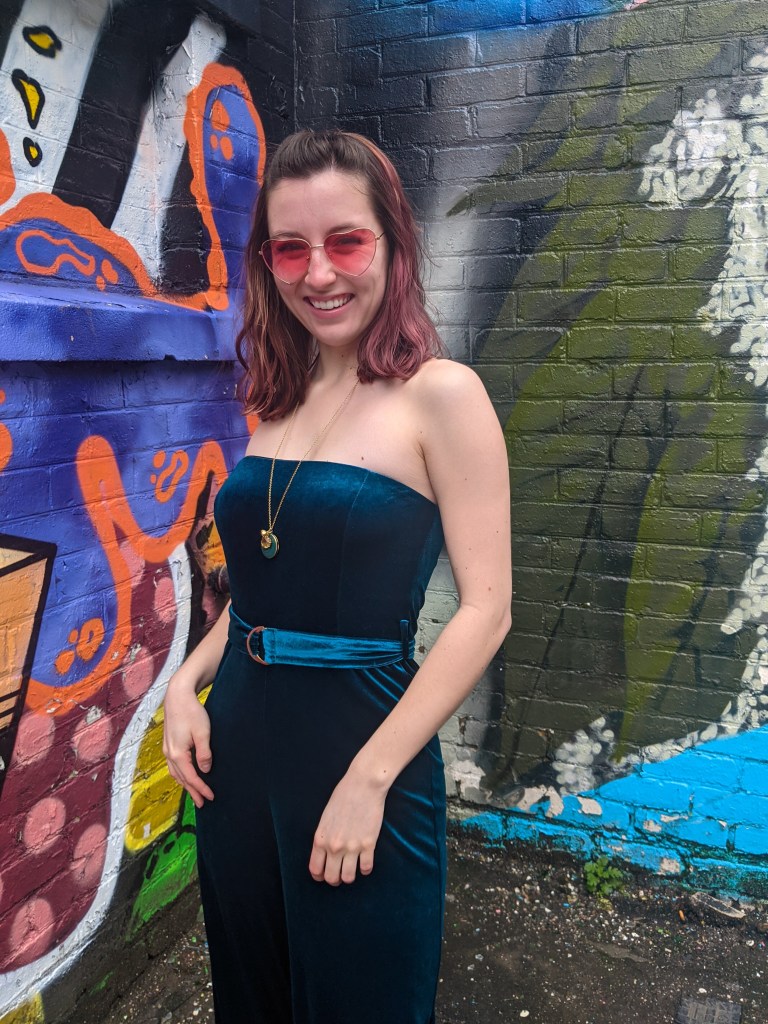 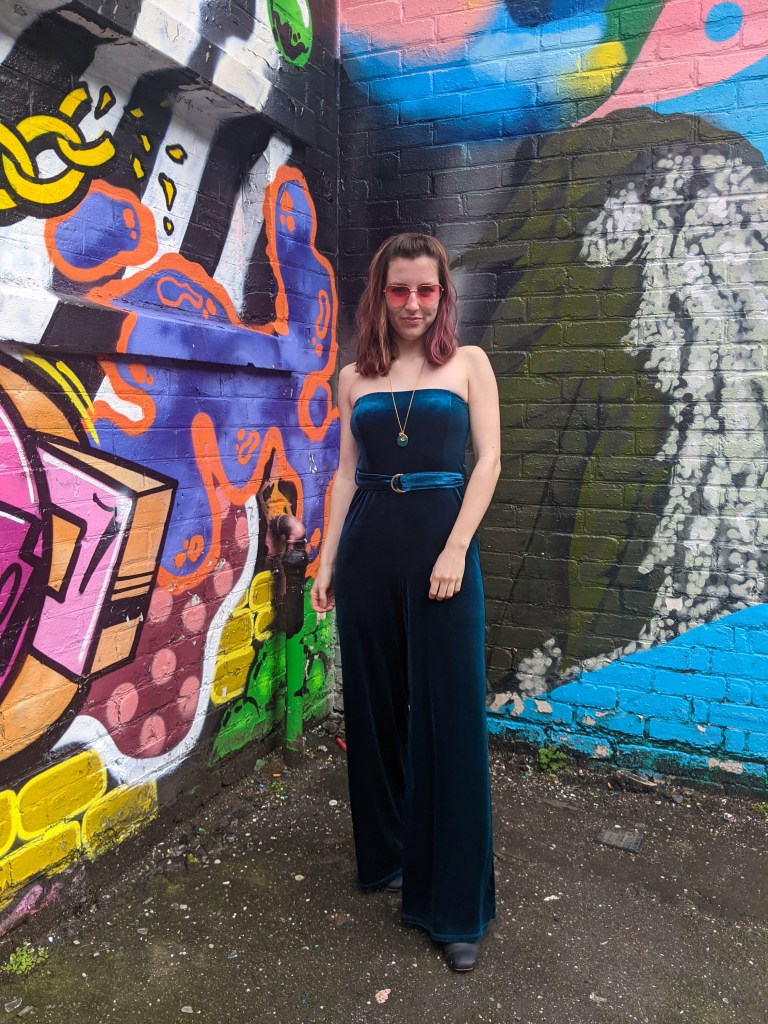 Beyond the outfit, the event itself was a blast. At first, a DJ was just playing classic hits from the 70s. My friend and I kept wondering, “Where is the ABBA??” Well, little did I know that there was actually an ABBA cover band that came on stage later in the night. I was just expecting ABBA on the radio, but no. Four ABBA imposters got on stage (full costumes, too) and sang and danced their hearts out. They even had fake Swedish accents. Hilarious!

In the end, there wasn’t much of a costume contest, but everyone was dressed to the nines. The people watching was honestly one of my favorite parts! I saw so many fabulous glittery jumpsuits, bell-bottoms, and flower power-type dresses. I think my favorite clothing item was a pair of full sequin, chevron flares. I don’t know where someone buys such a statement piece, but those pants were incredible! It was mostly a young crowd at the event (a very drunk and rowdy crowd, I might add), but we did see a gaggle of women in their 60s rocking their Mamma Mia Dynamos outfits, which was amazing. They were definitely ‘super troopers’ for putting up with the inconsiderate 20-somethings who were shoving everyone and spilling their drinks all over. 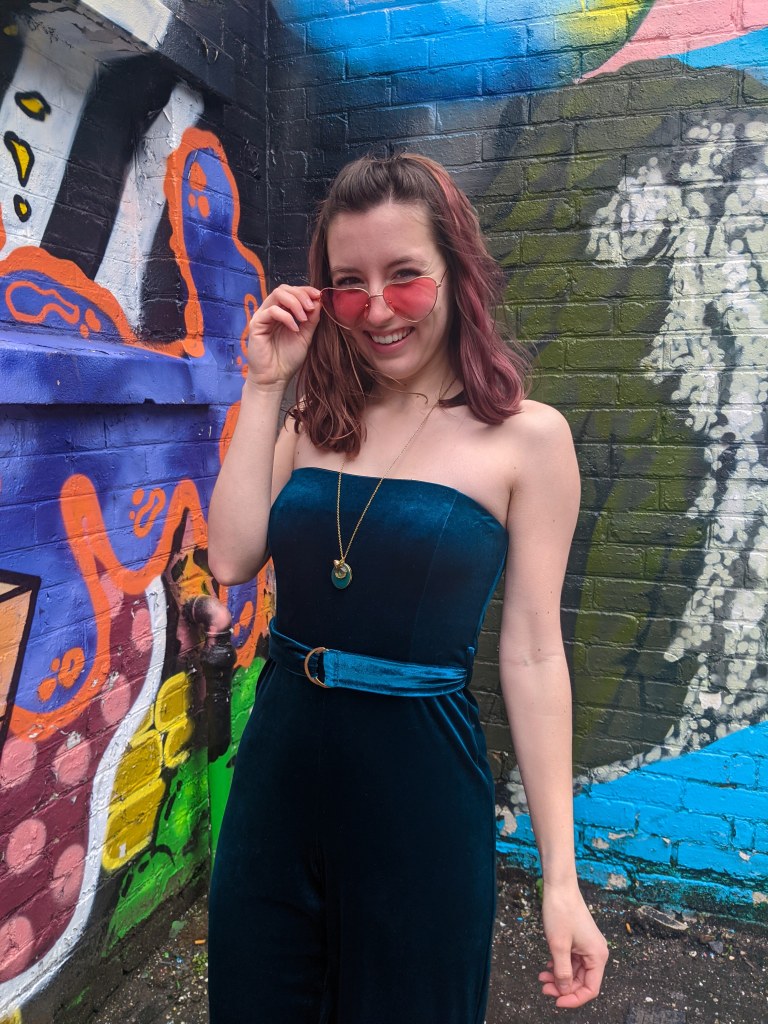 The event even had pyrotechnics and fake ABBA money that fell from the sky as confetti. Overall, it was such a great night! If I ever have the opportunity to attend an ABBA disco in the States, you know I’ll be there…

Have you ever been to a disco, and if so, what did you wear?! Let me know in the comments below!

2 comments on “Take Me to the Disco”