A Weekend at Isle of Skye 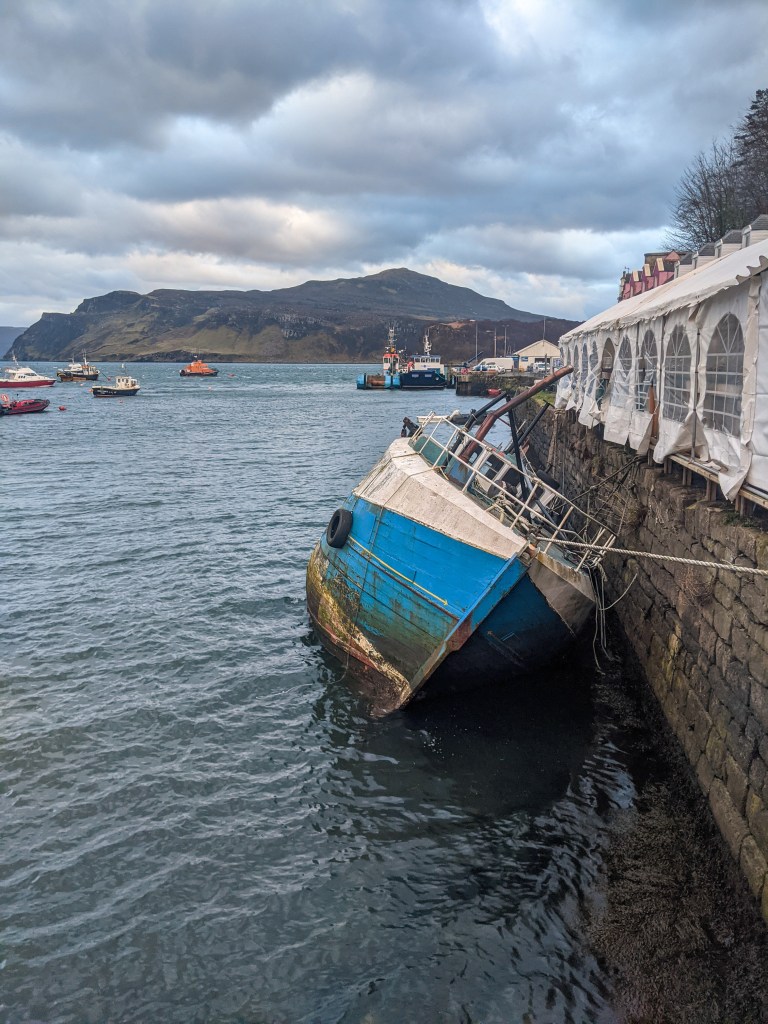 I’m finally getting around to sharing a post about my trip to Isle of Skye last weekend. For those of you who don’t know, Isle of Skye is an island off the northwest coast of Scotland and is the largest island in the Inner Hebrides archipelago. I booked a two-day tour with International Student Tours Scotland, which I highly recommend (it’s the same tour group with whom I went to the Glenfinnan Viaduct in the Scottish Highlands and Dunnottar Castle on the east coast). Below you can read all about what we did and where we went, as well as see some of my photos. But it goes without saying that pictures (especially phone pics) do not do this beautiful place justice! 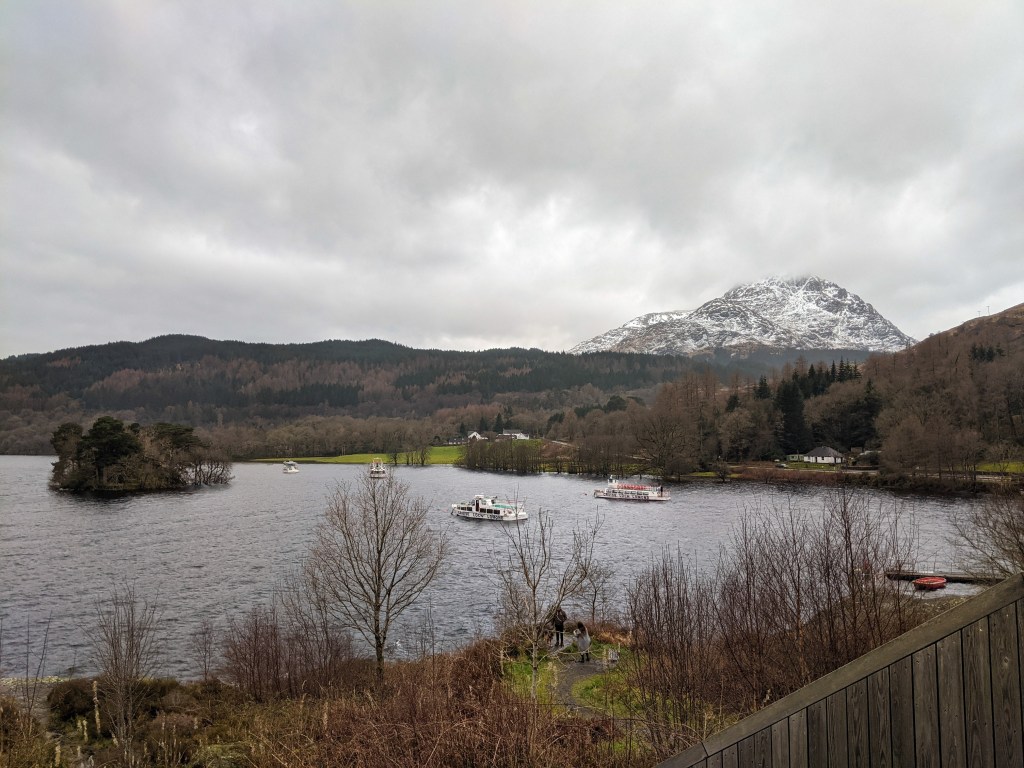 The bus picked us up on Saturday morning around 7:30 at the University of Glasgow campus, and we started our day! It was about a five-hour drive to our destination at the Isle of Skye, so we made several sightseeing stops along the way. The first portion of the drive was actually the same tour I had done when visiting Glenfinnan a few weeks ago. Thankfully though, I didn’t mind because the weather was much better today. I also had a different tour guide than last time, so it was kind of fun to hear the slight variations in the stories they told. 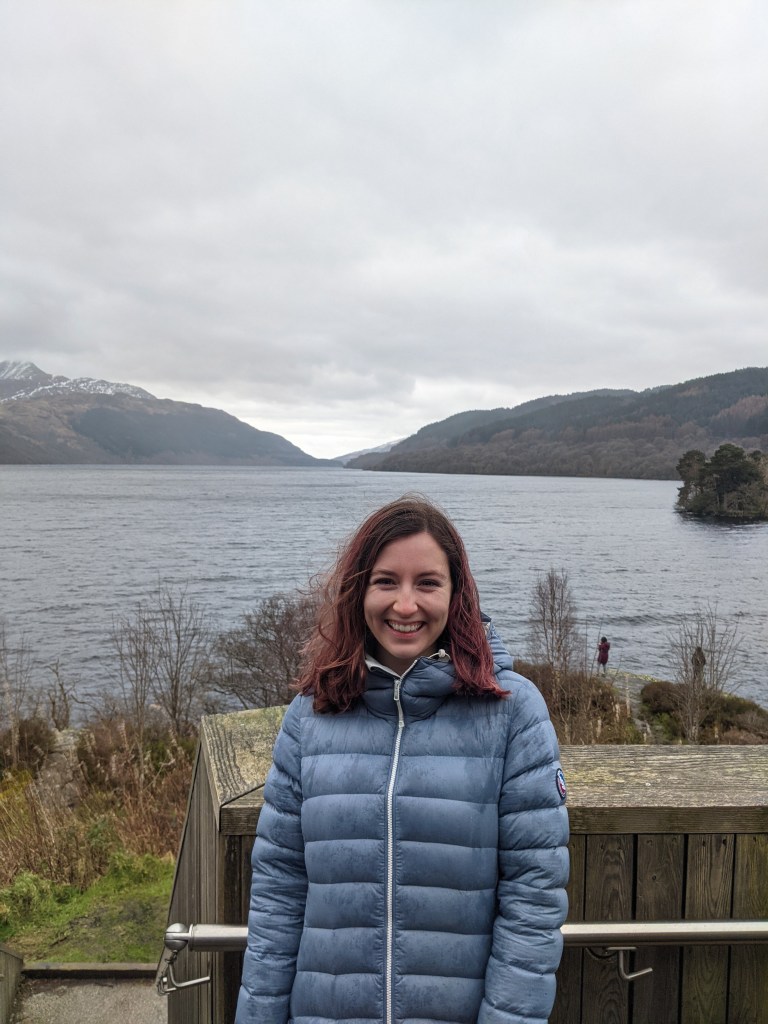 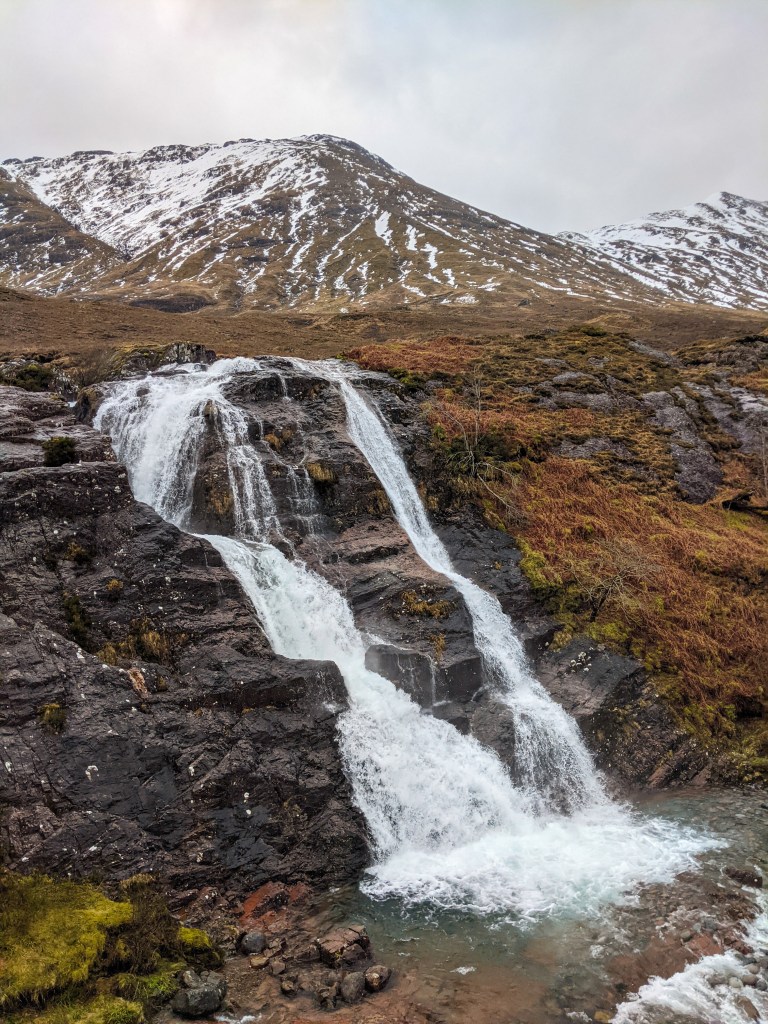 Our first stop was about a 15-minute break at Loch Lomond, where we could see some beautiful snowcapped mountains in the distance. Afterwards, our next quick stops were at Glencoe Falls and the Three Sisters of Glencoe (the three mountains). Last time I visited it was pouring rain, so it was much more enjoyable to take in the scenery today. Still windy as ever, though! 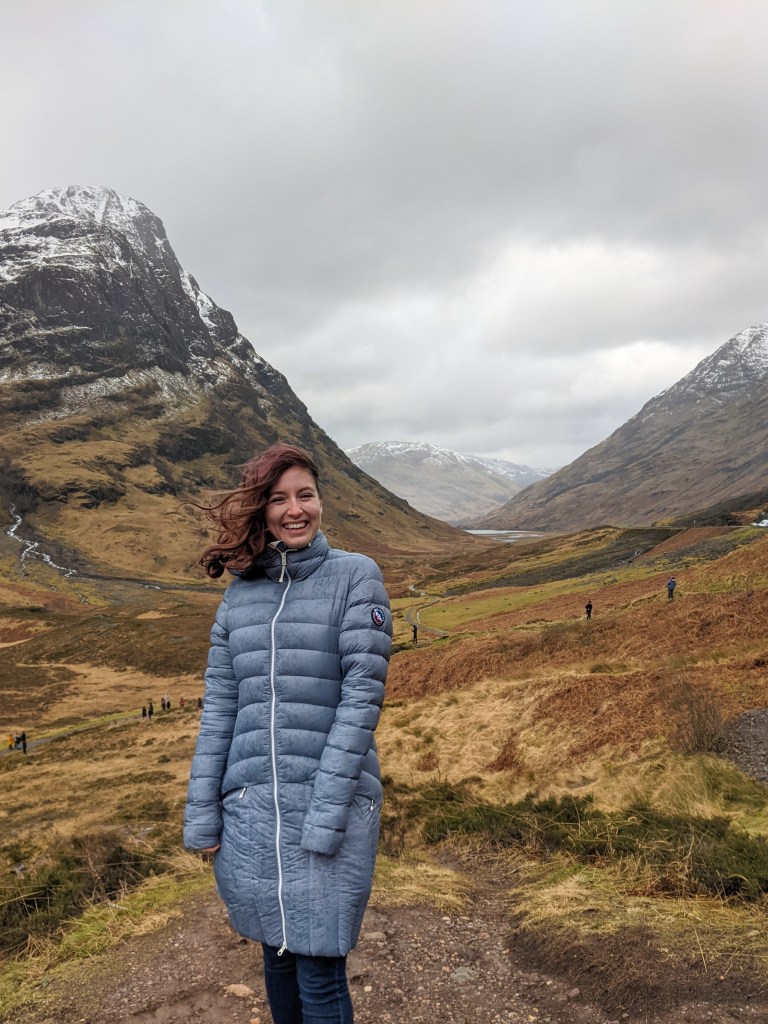 We stopped for lunch in Fort William, which we had also done on the Glenfinnan tour. I sat with the tour guide and a few international students, and it was so fun to pick the tour guide’s brain. She told us some really funny stories about past trips, as she has been doing these student tours for over a decade. What a fun job, right? You would get to meet so many interesting people. Although, I do think I might get sick of going to the same places and telling the same stories multiple times each season. 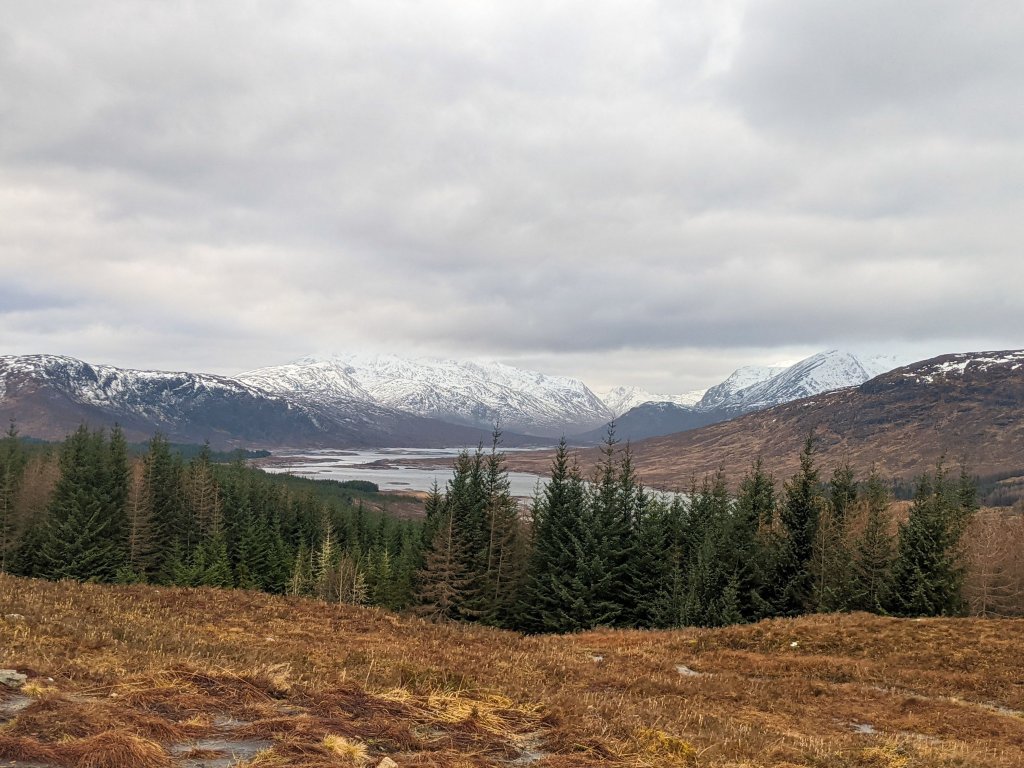 After lunch was new territory to me, as we continued further north than we had in my previous tour. Our next several stops were just quick photo-ops of the gorgeous mountain scenery. The snow from the previous week’s storm made everything prettier, if that it’s even possible! I heard one girl complaining that “all the mountains look the same after you’ve seen one” and, hm, I just disagree. Maybe they do look the same, but they’re still just as beautiful. I could be amazed by the scenery here all day long. 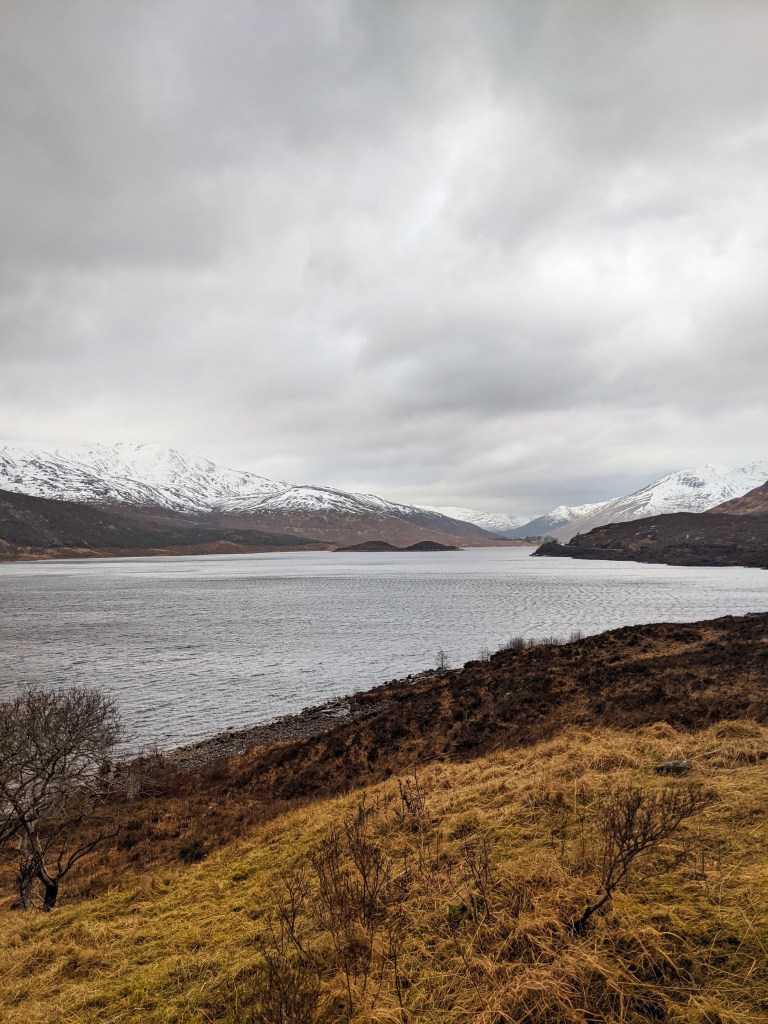 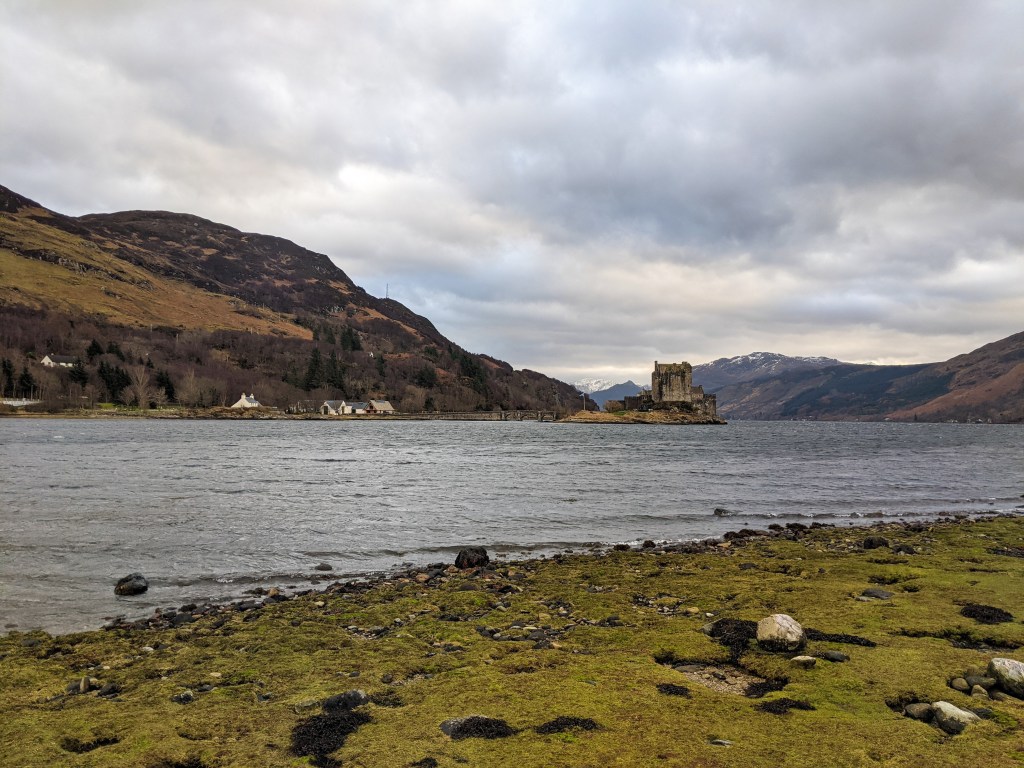 After that, we finally crossed the bridge onto the Isle of Skye! Our first stop on the island was at Glen Sligachan, which was the most beautiful stop, in my opinion. The tour guide told us a legend that took place here about a woman who fell off her horse and whose face was mutilated. A fairy appeared to her and told her to dip her face in the waters of the Sligachan River (seen below) for seven seconds to heal her face and receive eternal beauty.

I don’t quite remember all the details of the legend, so I tried to look it up online to share here… but turns out there are a lot of very different stories about these waters! One aspect remains consistent across all the tales, however—if you dip your face in the water for seven seconds, you will be beautiful forever. So, naturally, the bravest among our tour group decided to kneel on the riverbank and wash our faces in the frigid stream. The water didn’t end up being too bad, though I did have a brain freeze when I emerged after my seven seconds—a small price to pay for everlasting beauty. It was such a fun experience and one of those things I never would have known about had I not been on a guided tour. 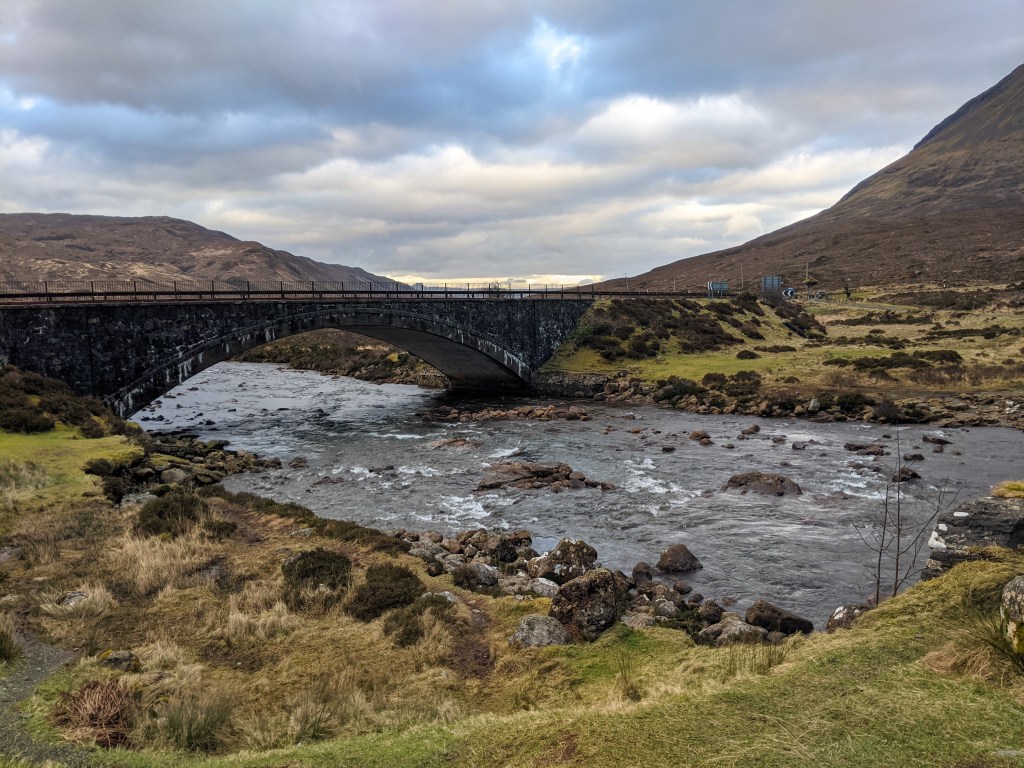 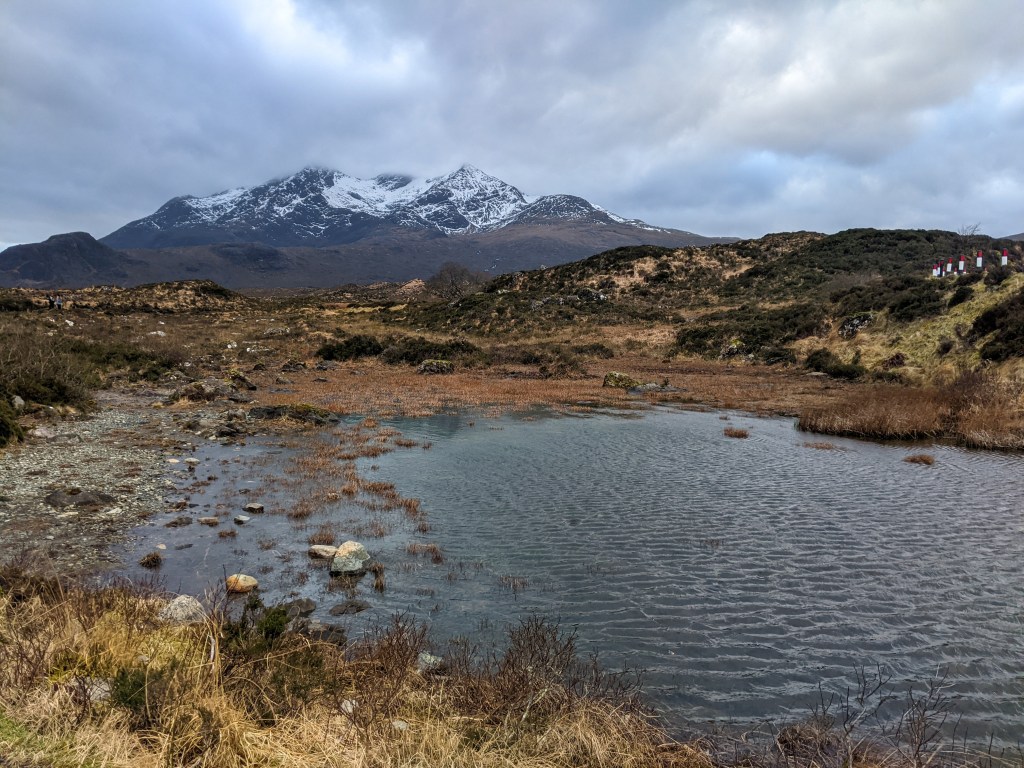 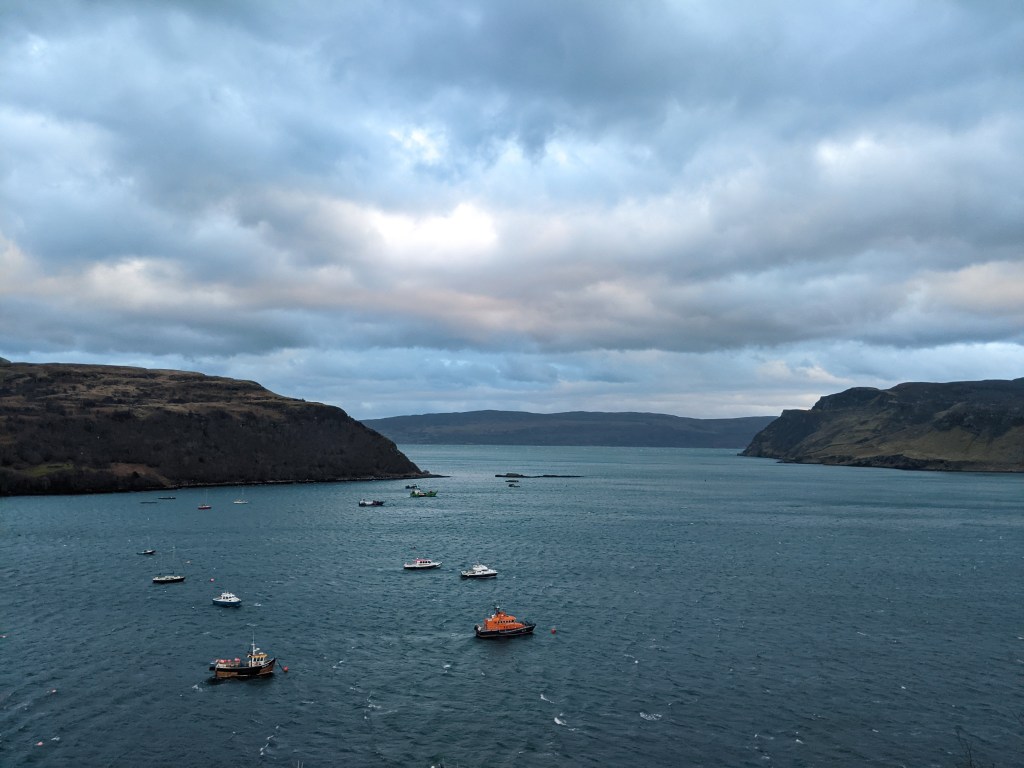 Afterwards, we finally made it to Portree, the capital of Isle of Skye and the sleepy town where we spent the night. I was grateful to finally be done driving for the day because I had actually felt really carsick for most of the drive, which was a bummer. I haven’t felt carsick in years, but something about the big tour bus and uneven roads just did not sit well with me.

Our large tour group had a hostel all to ourselves, which was so much fun and such a great way to bond with the other students. Our accommodation was called Portree Independent Hostel and had a great kitchen, fully stocked with pots and pans. I thought that was really convenient because there are only a few restaurants in town, and they were all quite expensive—I think cooking for yourself would be a must if you wanted to stay in town for longer than a night.

Once we checked into the hostel, everyone was free to do what they wanted for the rest of the evening. I hung out with a group of girls from several different countries, as we explored the main street of the town, walked up to an old lookout tower to see the water below, and grabbed dinner together. Our tour guide told us it was the off season but that the Isle of Skye gets SO packed during the summer months. It was a little hard to believe because the way we experienced it was kind of like a ghost town—it felt like our tour group were the only people there.

Later in the evening, a group of us went to a nearby pub and enjoyed talking about what we miss most from our home countries, our favorite parts about Scotland, politics, etc. Another girl and I ended up heading back to the hostel a little earlier because we were so tired after a long day of driving. It’s funny that driving involves doing absolutely nothing yet somehow is so exhausting. 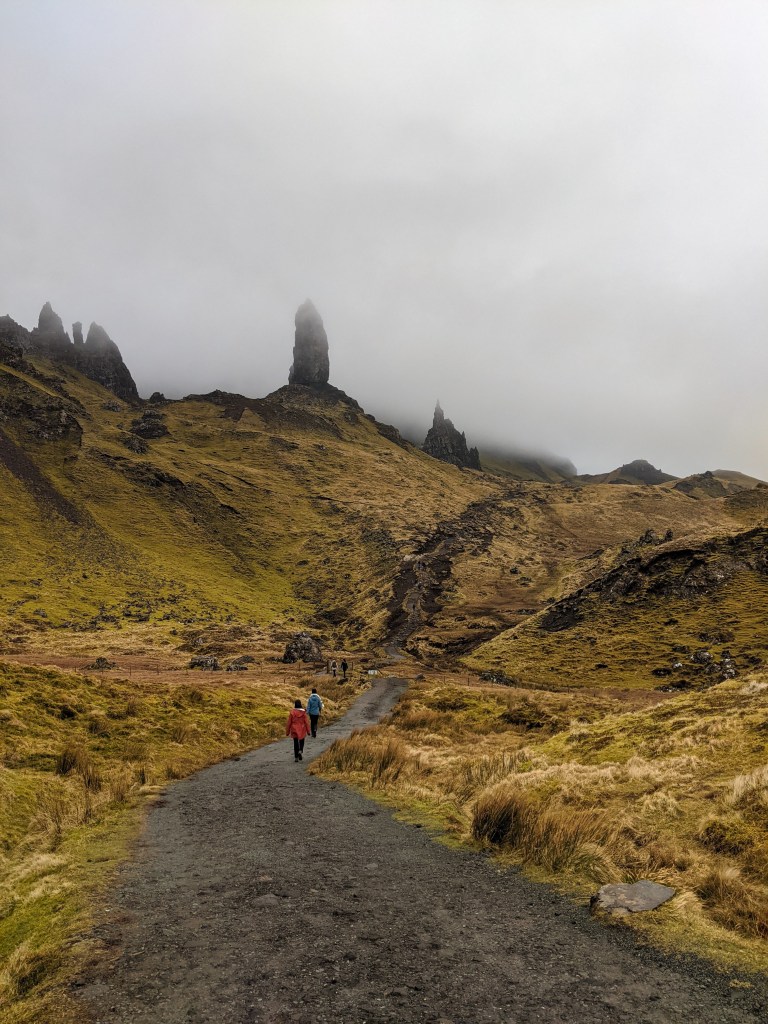 On Sunday morning, we had a light breakfast in the hostel and then drove to Old Man of Storr for a beautiful hike. The rocky terrain and misty skies made for such a majestic and moody atmosphere! Every step higher seemed to have an even better view than the last. This is also where Harry Styles filmed his music video for “Sign of the Times”, which the tour guide showed us right before embarking on our hike. I always think it’s kind of cool to watch a setting in a famous video or movie and then experience that location for yourself. 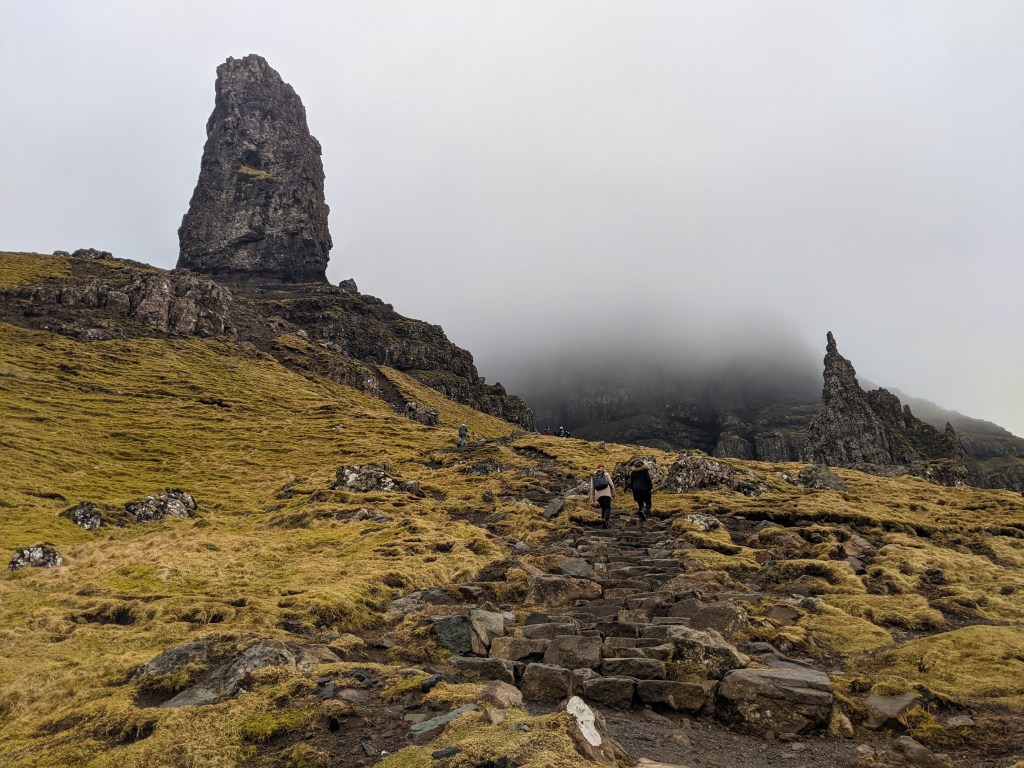 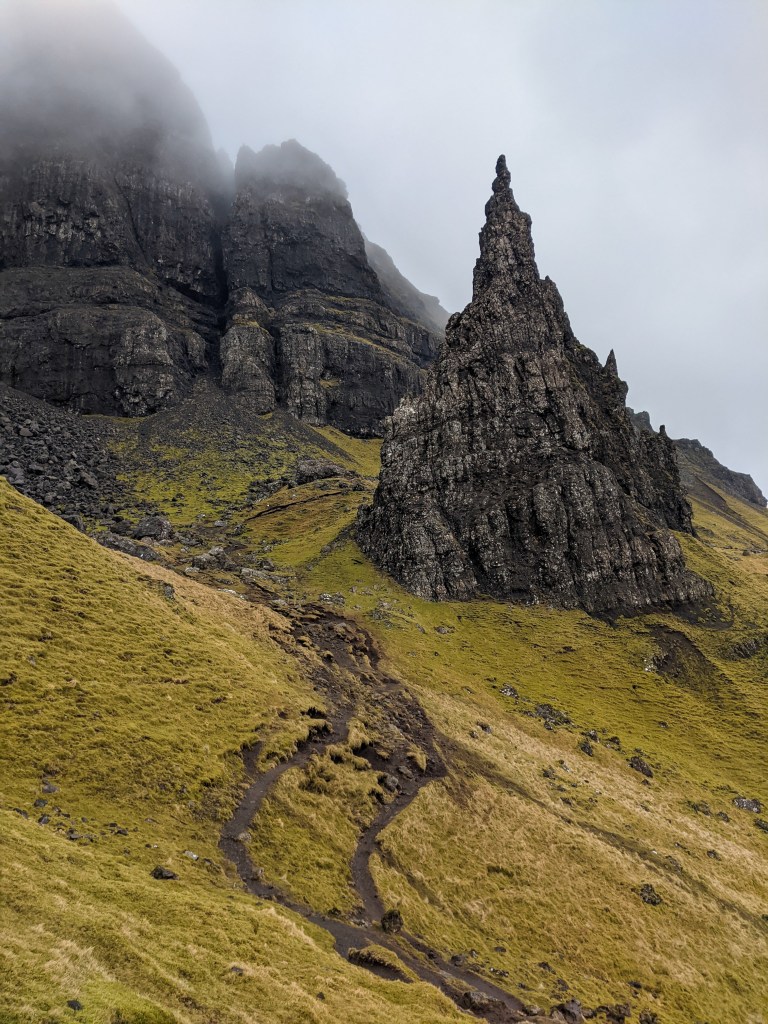 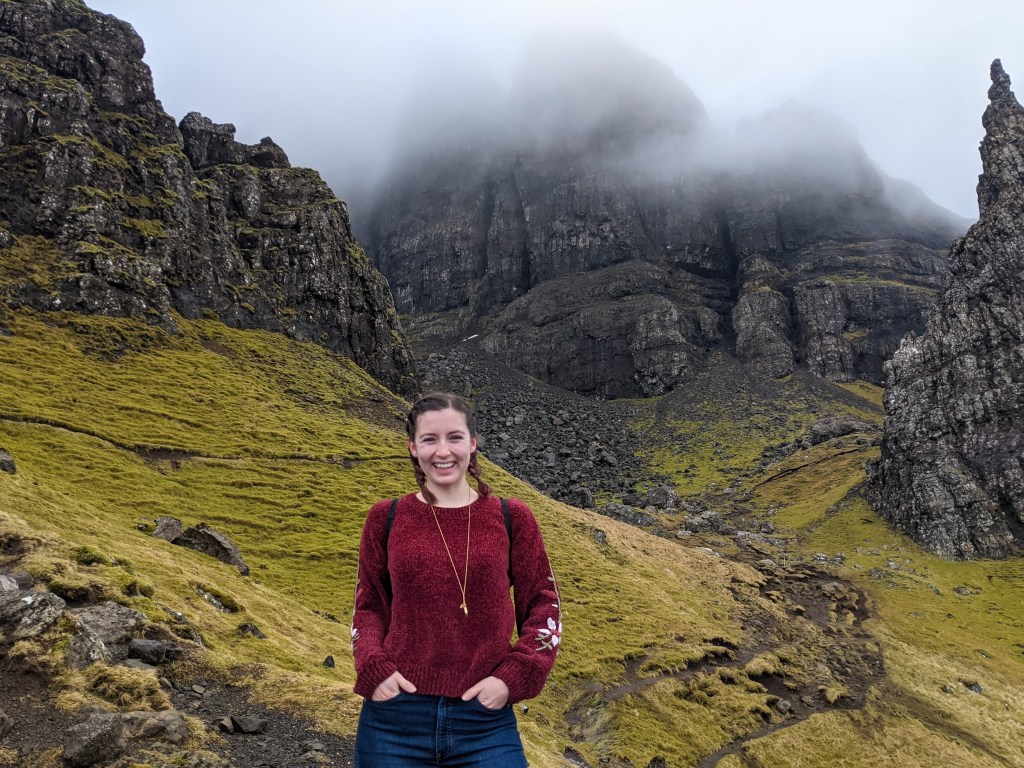 We made another quick stop for some views of the water, which was surprisingly a gorgeous teal color. I usually associate that kind of vibrant water with warm climate locations, but even the cold shores of Scotland have bright shades of blue. 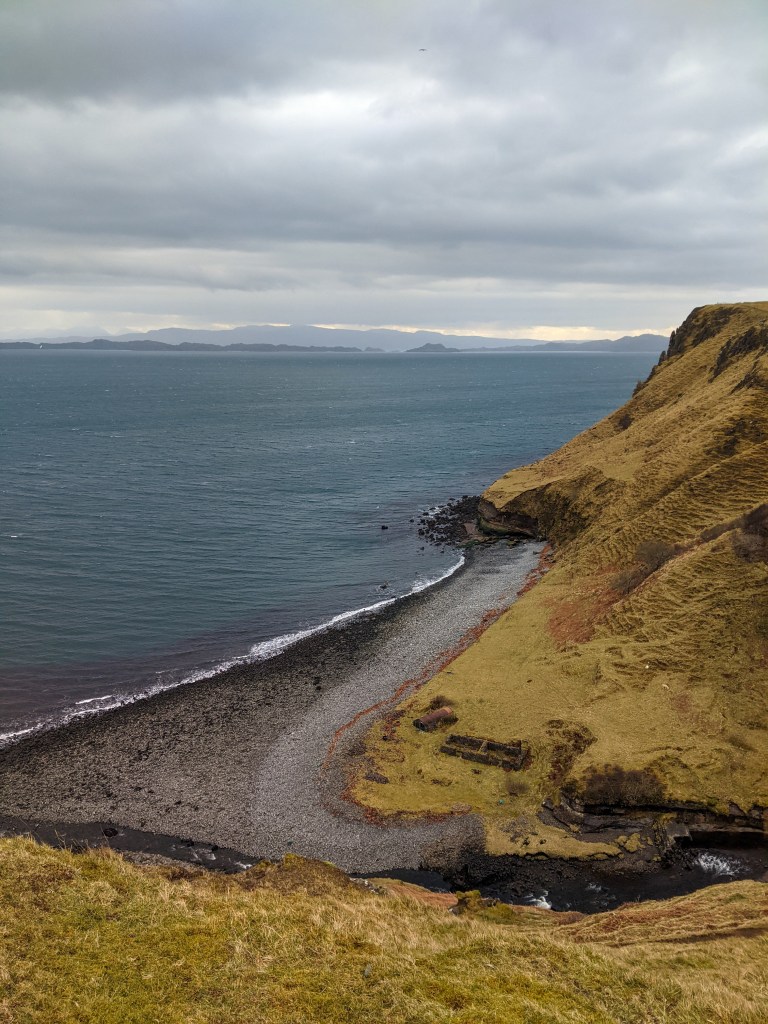 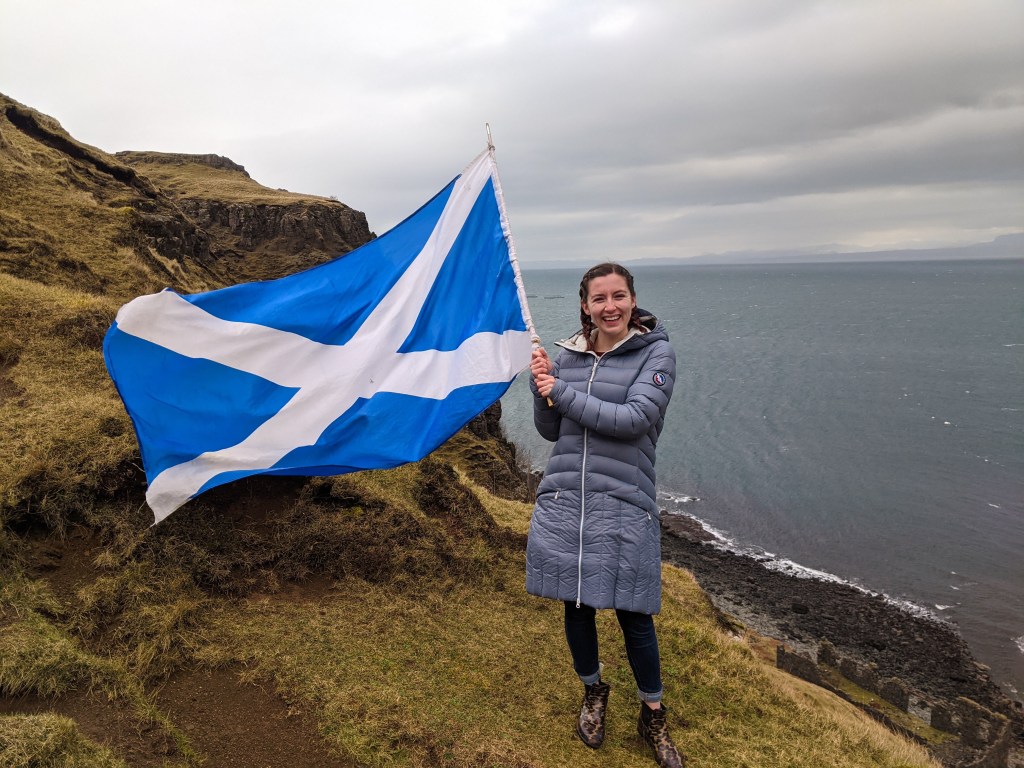 Our last stop on our morning drive was at Kilt Rock to see the waterfall below, which is one of the few waterfalls in the world that dumps directly into the ocean. This view reminded me so much of the Cliffs of Moher in Ireland—in fact, unsurprisingly, a lot of the scenery seems quite similar. 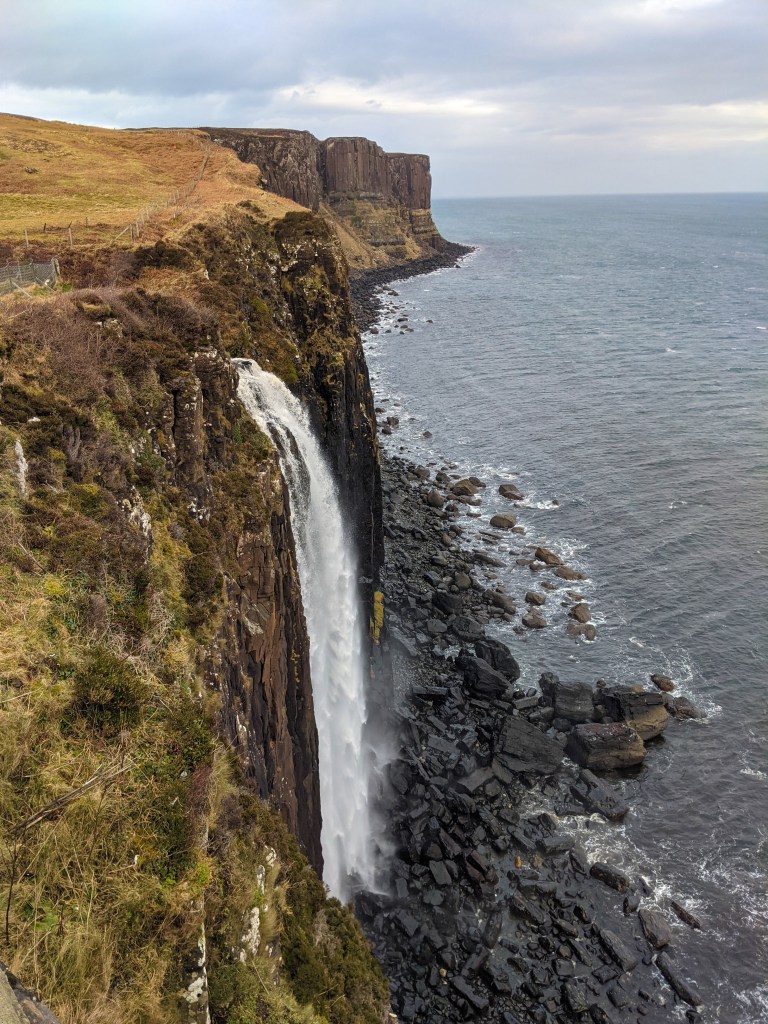 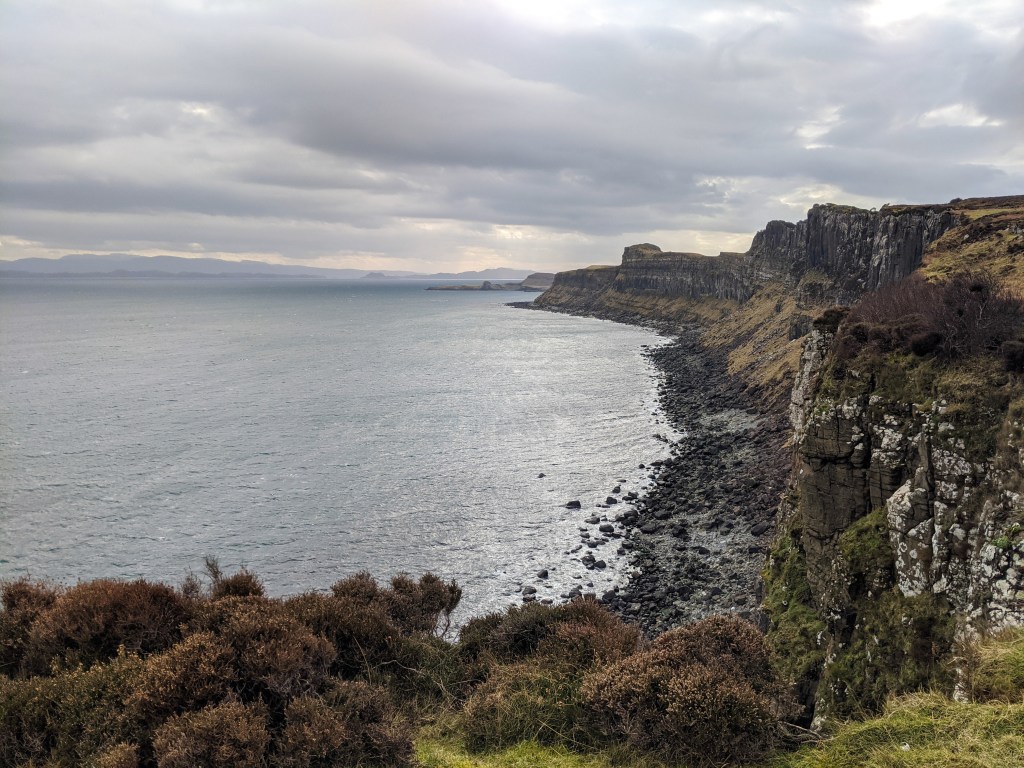 We went back to Portree to get some fresh fish and chips for lunch, and then I spent some time walking along the shore collecting sea glass. I’ve always felt so at peace by the water, and I could have stayed at Skye for days… just taking in the stunning scenery.

After lunch, we made a quick stop before leaving the island so that we could view the bridge from afar (seen below). We then started the drive back to Glasgow… The last stop we made was for a bathroom and souvenir break near Ben Nevis, the tallest mountain in Scotland.

In terms of packing, what I would suggest bringing to Isle of Skye is similar to what I would suggest for most places I’ve been in Scotland: sturdy rain boots, a waterproof coat that covers your butt, hiking shoes, waterproof hiking pants, and hair ties (for the wind). For Skye specifically, I would also suggest bringing some of your favorite activities—a good novel, your journal, a canvas and paints… The place is so relaxing and inspiring. I can see why the stereotypical moody writer portrayed in movies always goes to a beautiful, remote location to get work done. 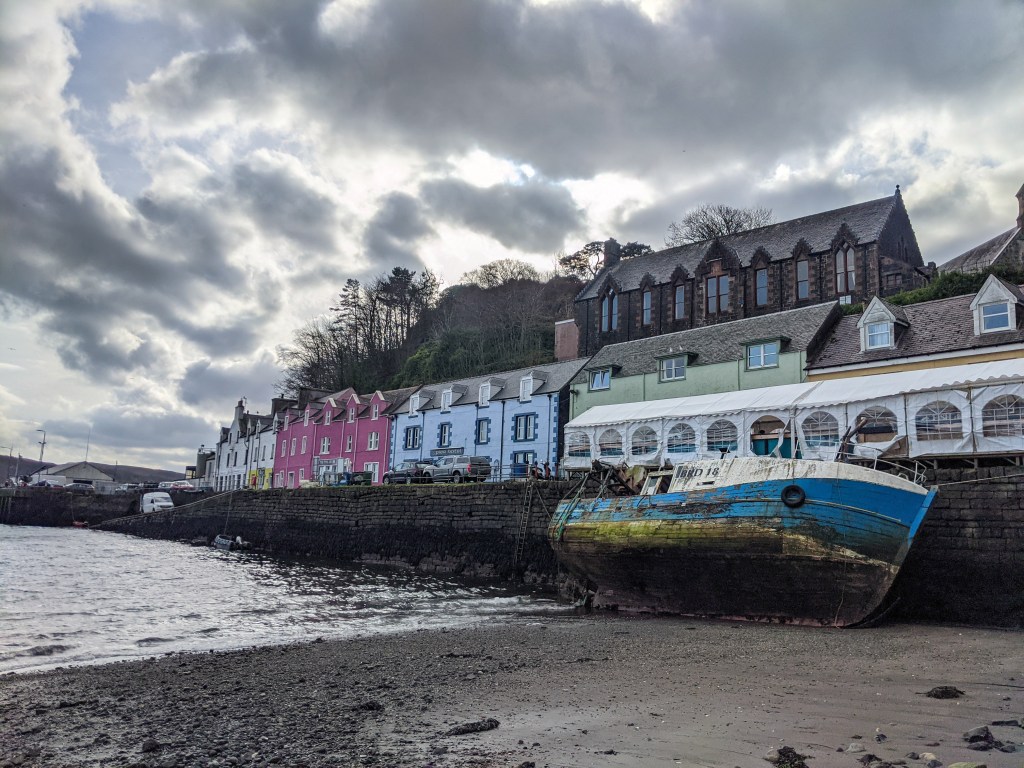 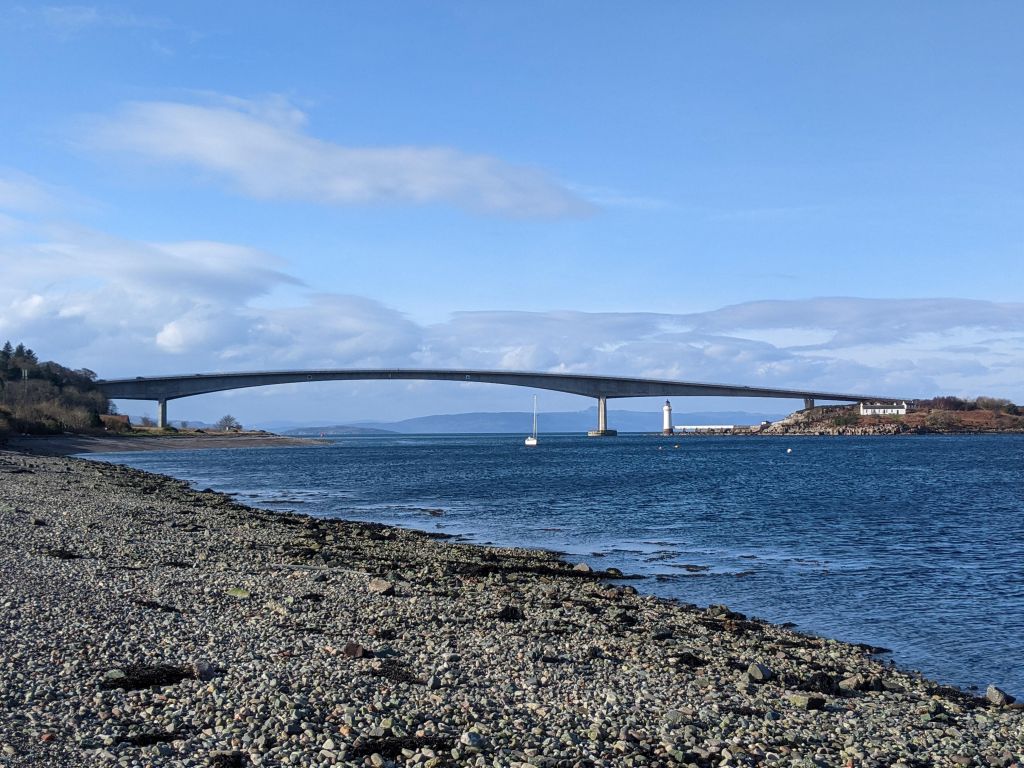 Overall, Skye was probably one of the most stunning places I have ever been. I had such a great time taking in the views and making new friends—it was one of those surreal (and cheesy) moments where I felt very grateful to be in this stage of life. However, I will say, I’m not sure that there is much to in Skye aside from going on hikes and enjoying the scenery. Of course, I could spend a relaxing week there hiking, reading, and writing. But as a tourist with limited time and resources, I would rather just spend a day there and then spend more of my time exploring other parts of Scotland. I imagine it would also be very difficult to get around the island without renting a car.

As always, thanks for reading this post, and I hope you enjoyed these pictures! Be sure to leave any questions below if you are considering planning a trip to Skye and want to know more information.

10 comments on “A Weekend at Isle of Skye”