A Day Along Scotland’s East Coast 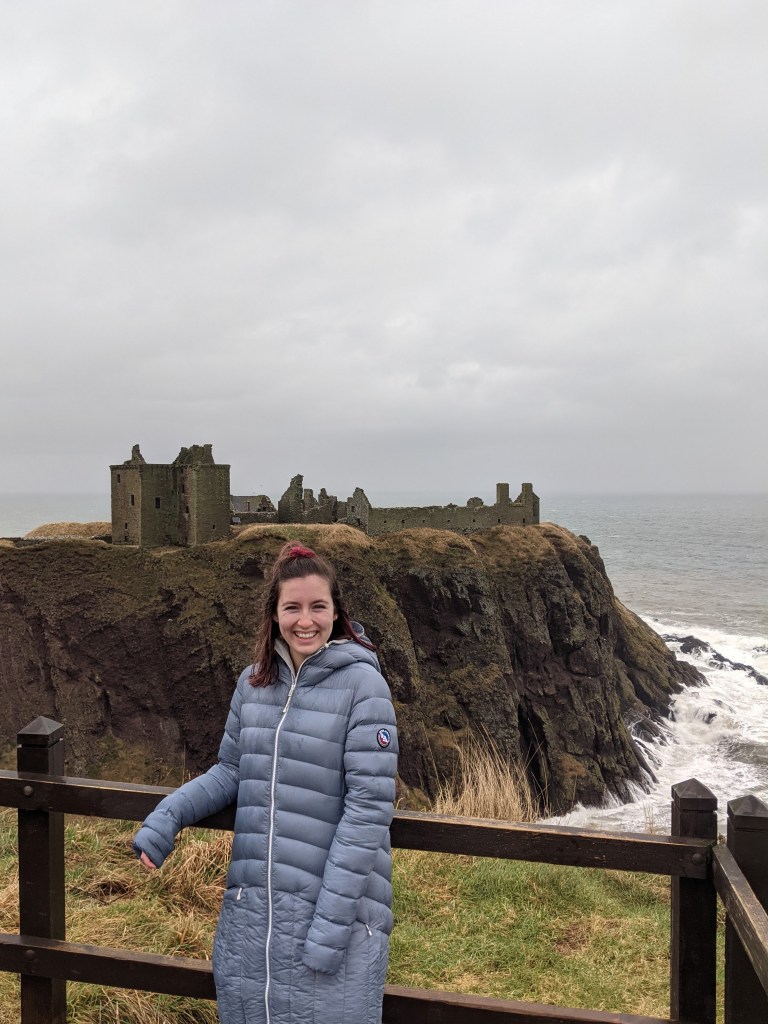 Coming at ya’ a day later than expected, but I’m so excited to show you some pics from my trip to Scotland’s East Coast last weekend! I went on another tour with International Student Tours Scotland, and today’s three stops were Dundee, Dunnottar Castle, and Aberdeen. Dundee is the fourth biggest city in Scotland and Aberdeen is the third biggest city, followed by Edinburgh (the capital) and then Glasgow as number one. So I have now been to the four biggest cities in Scotland! It was really fun to get to explore the East Coast a little and see the beautiful North Sea. 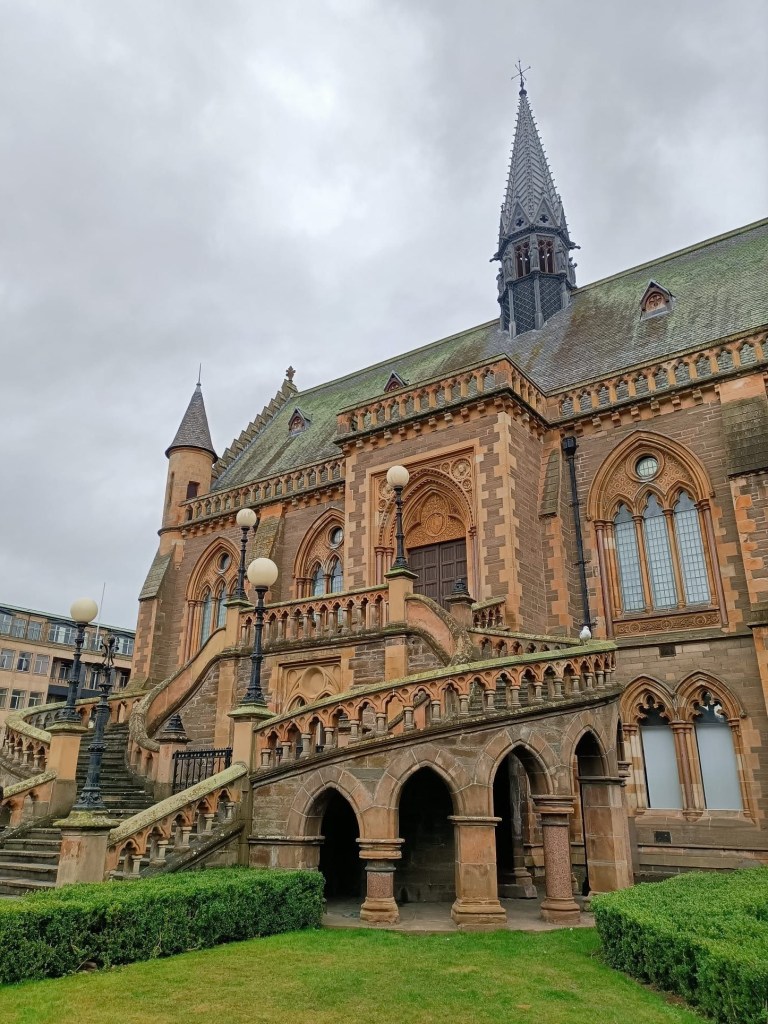 Unlike my Glenfinnan tour through the Scottish Highlands a few weekends ago, today’s trip involved a lot fewer stops, as there weren’t many photo-ops on the drive. We drove the first hour and half straight to Dundee, where we learned that the town apparently really likes penguins… The RRS Discovery, a ship that is today docked in Dundee on the River Tay, had sailed to Antarctica from 1901-1904 for research. It was the first expedition to sight Emperor Penguins during their egg-laying season, and the crew was able to obtain an egg of the species for their studies. Hence, the Dundonians (supposed) fondness for the animals! 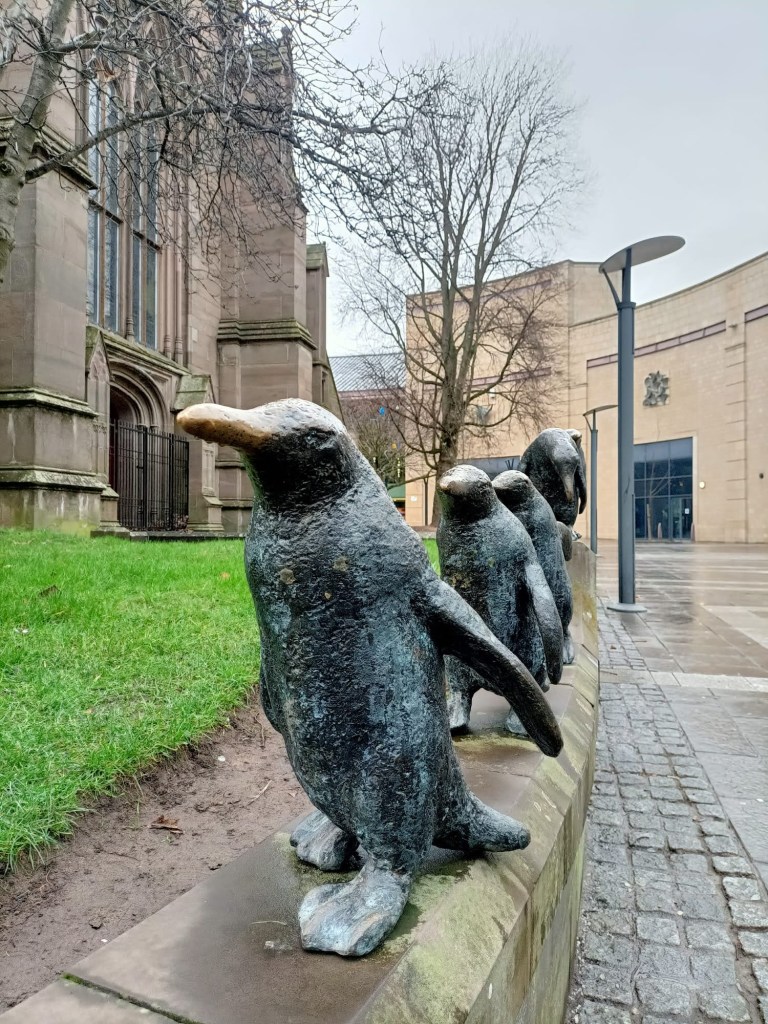 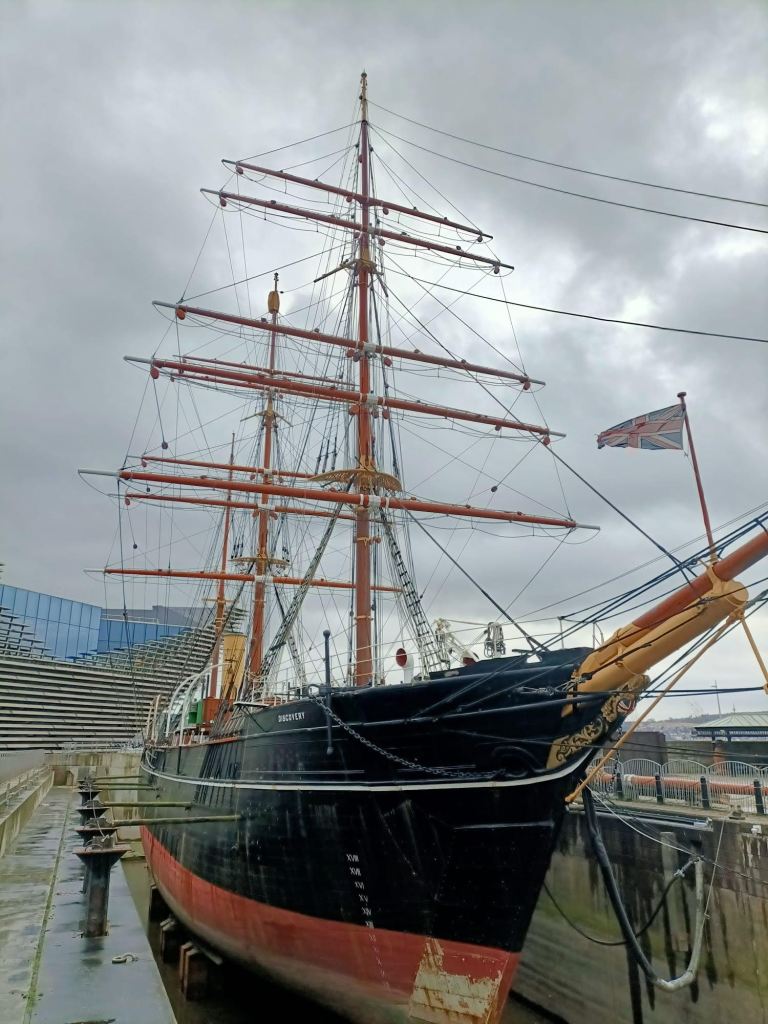 Could you imagine being on this ship for three years while sailing to Antarctica and getting stuck in the ice for two of them? Yikes!

I was a dummy and accidently left my phone on the bus at this stop, so I couldn’t take any of my own photos. Thankfully my friend and the tour guide shared some of theirs instead. Isn’t the building below just magnificent? It’s the McManus Art Gallery and Museum. We didn’t have a long time to explore Dundee (and the museum was closed anyway), but we enjoyed pretending we owned this palace… practicing our best princess waves (elbow-elbow, wrist-wrist). 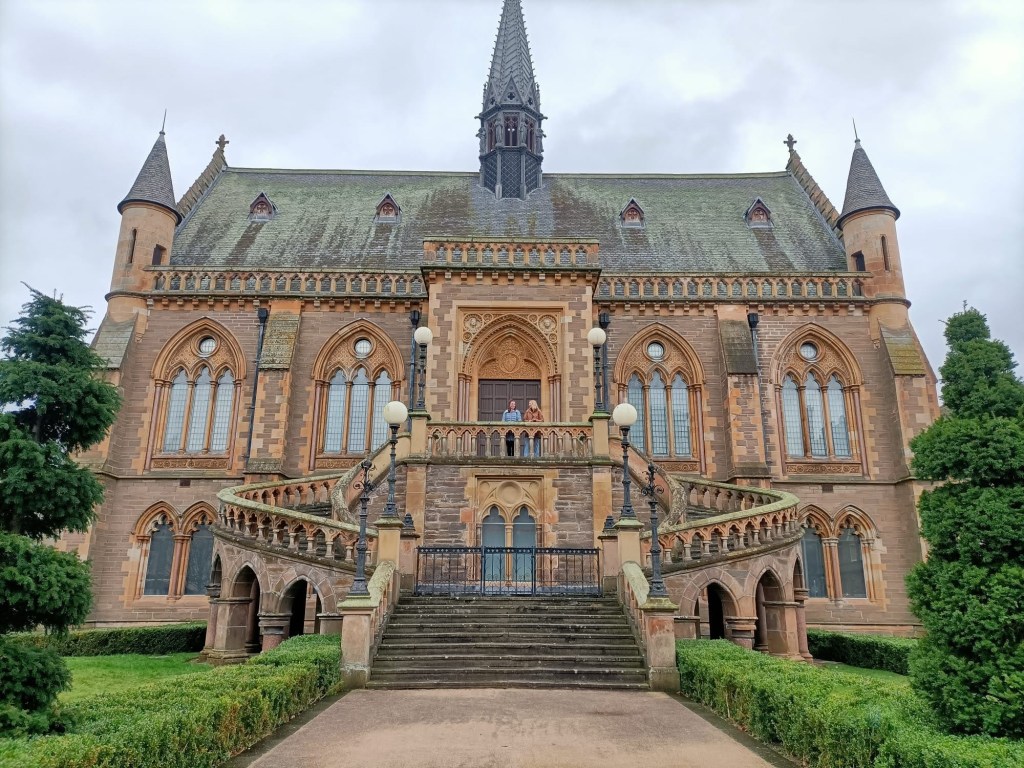 Our next stop was Dunnottar Castle, which is a ruined medieval fortress mainly from the 15th and 16th centuries. As an American, where everything in our country is relatively “young”, it’s hard to fathom how old these structures are! The rain thankfully stopped in time for some pictures and incredible views of the castle and the North Sea. Our tour guide played Ed Sheeran’s song “Castle on the Hill” as we drove up to the parking lot! Seems fitting. 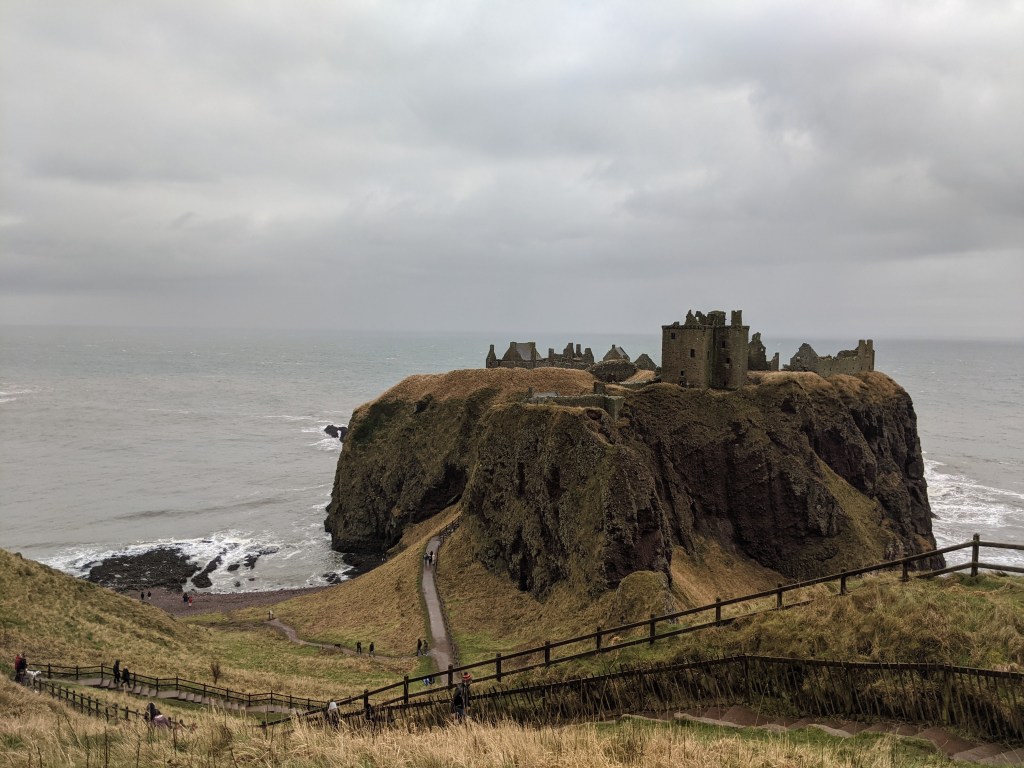 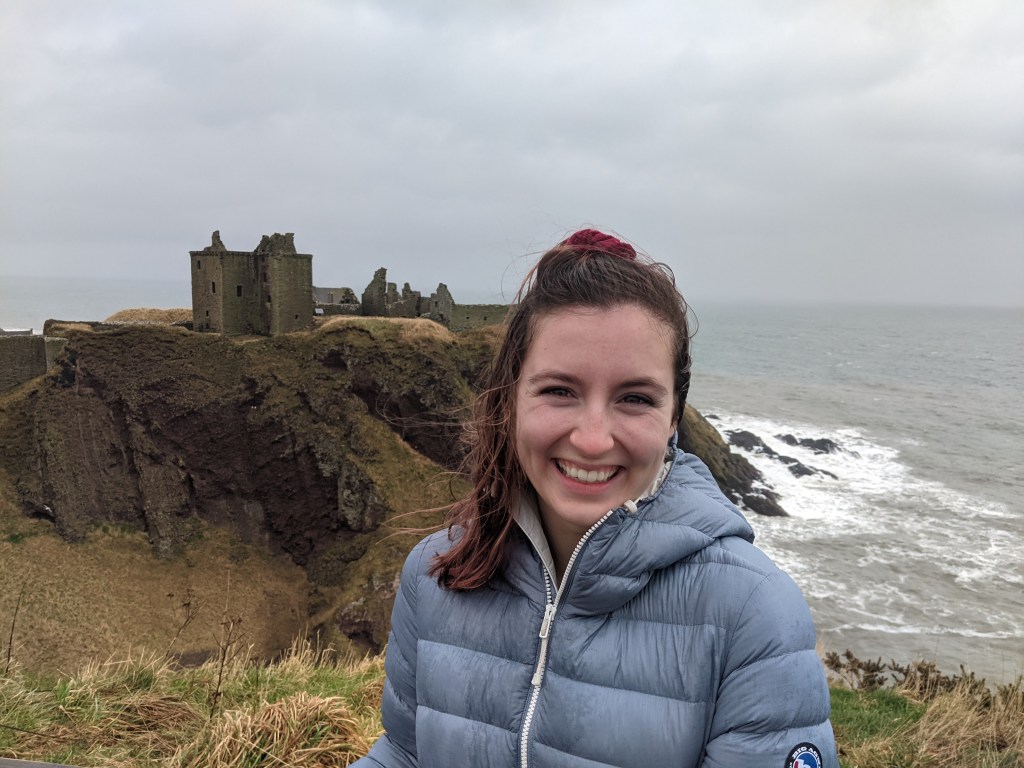 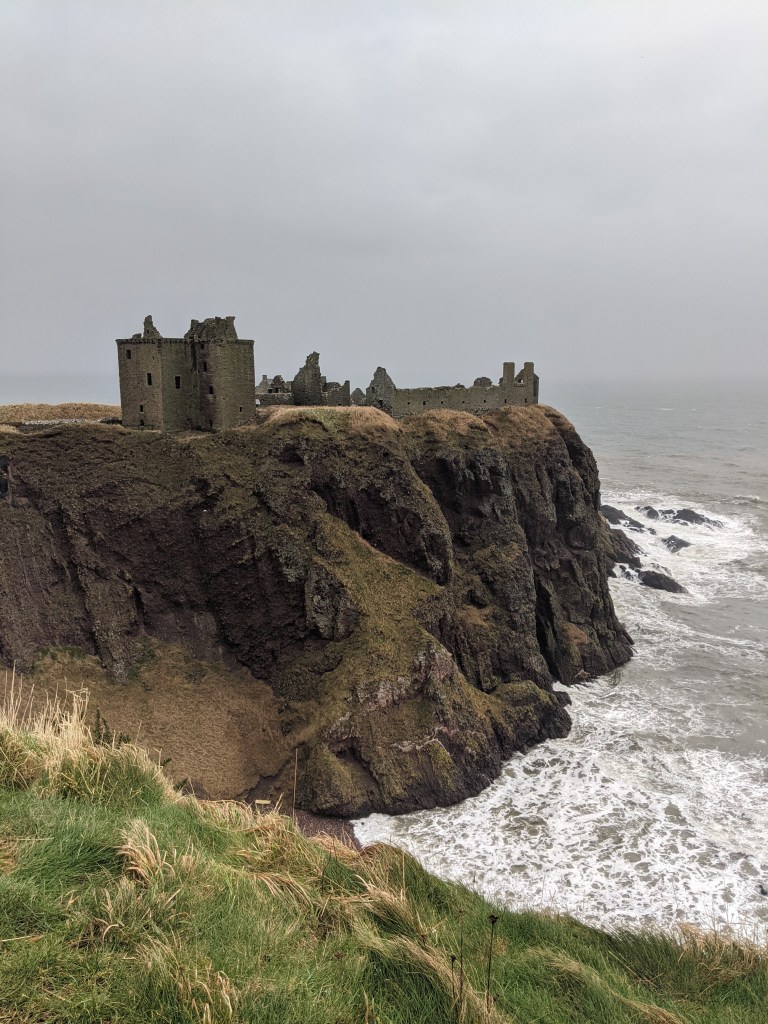 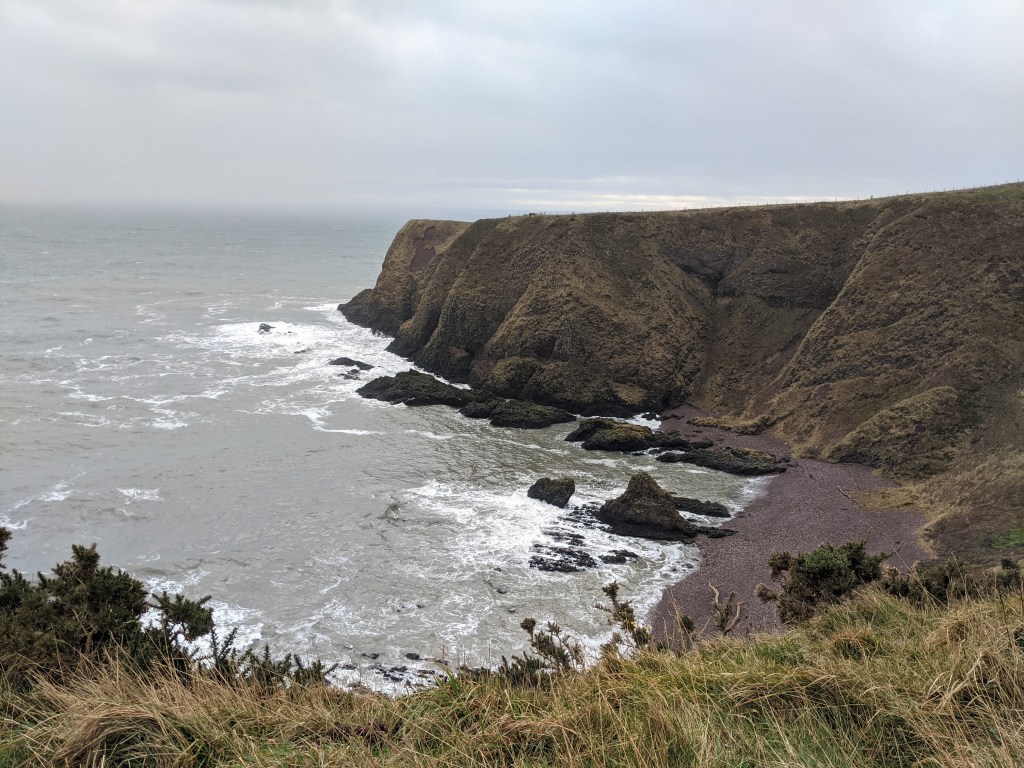 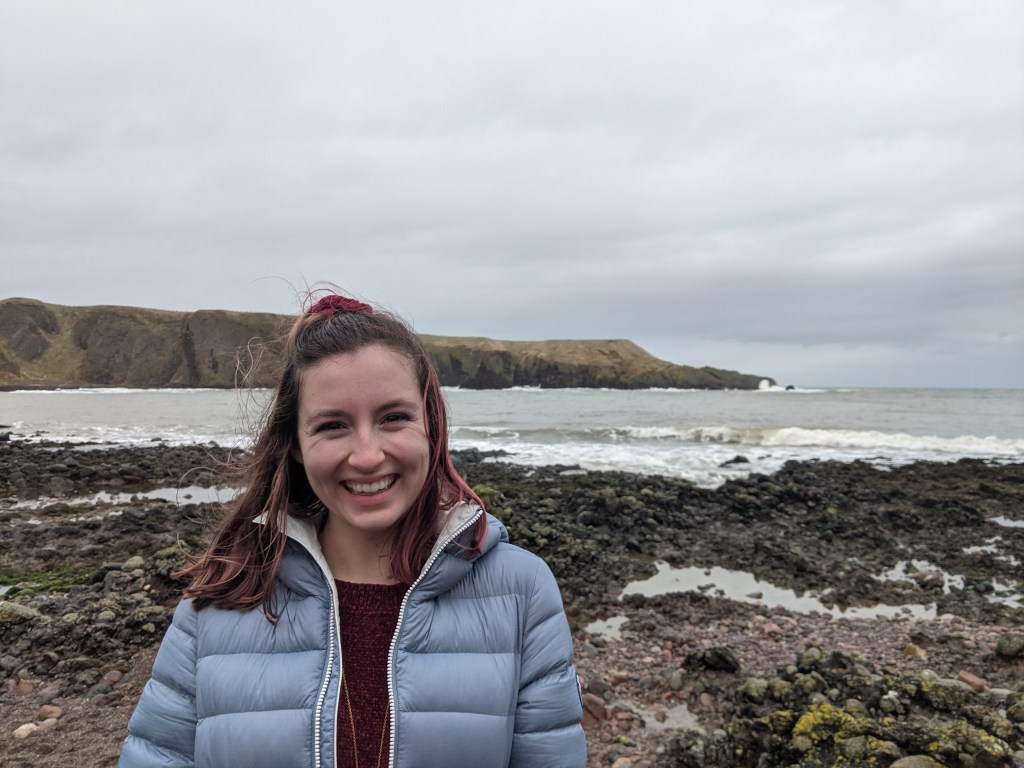 From the viewpoint, my friend and I made the hike down to the waterfront to explore a cave, pick up a few seashells, and dip our hands into the sea. We then decided to hike up to the castle and tour it, as they were offering half-priced admission for the day. I’m really glad we wandered around inside the ruins because I didn’t fully grasp them from afar. What looked like maybe one or two major structures turned out to be a whole town of ruins, where we could see several kitchens, a dining hall, a lion’s den, a chapel, a jail, etc. Per usual, my pictures don’t really do it justice. 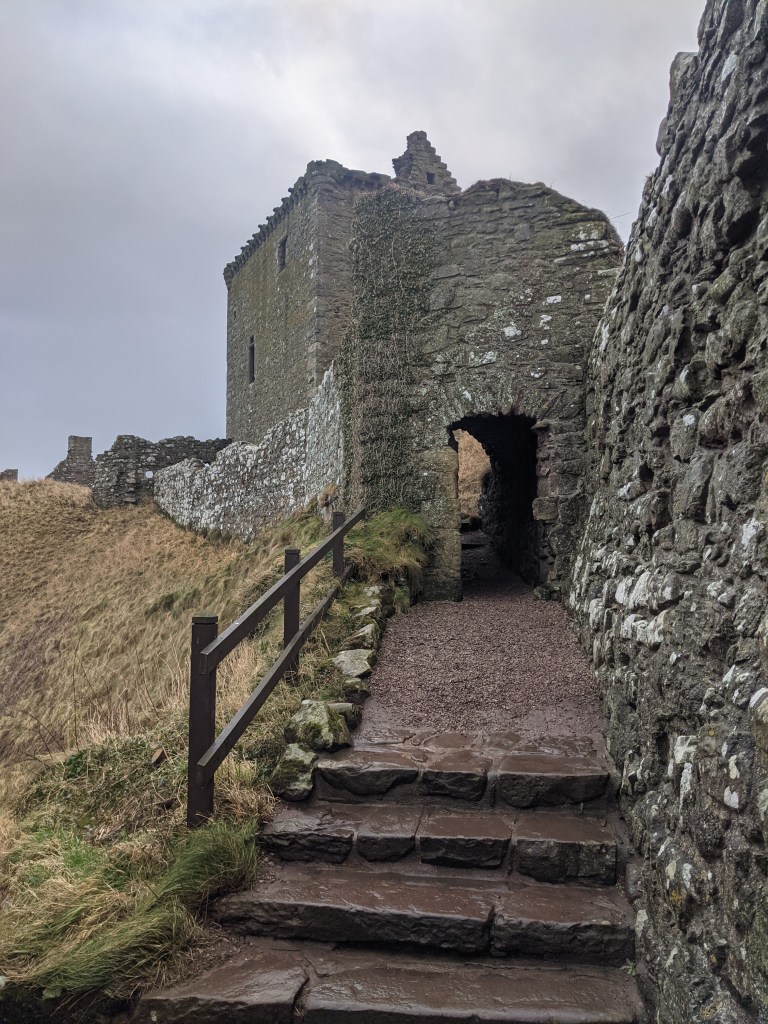 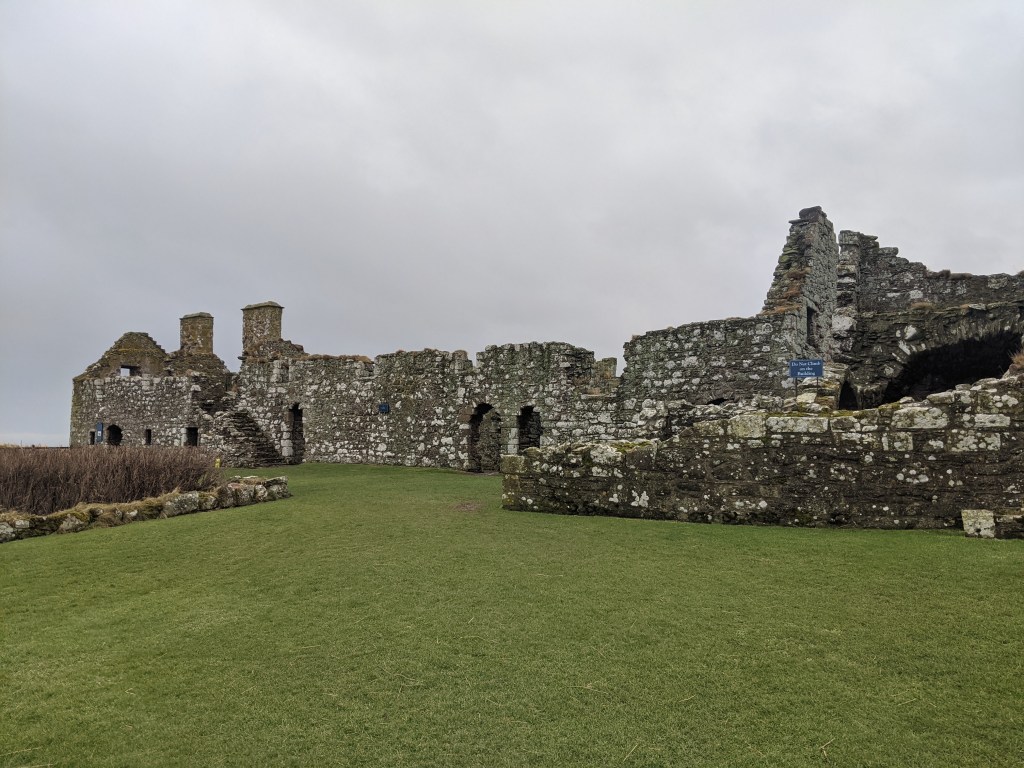 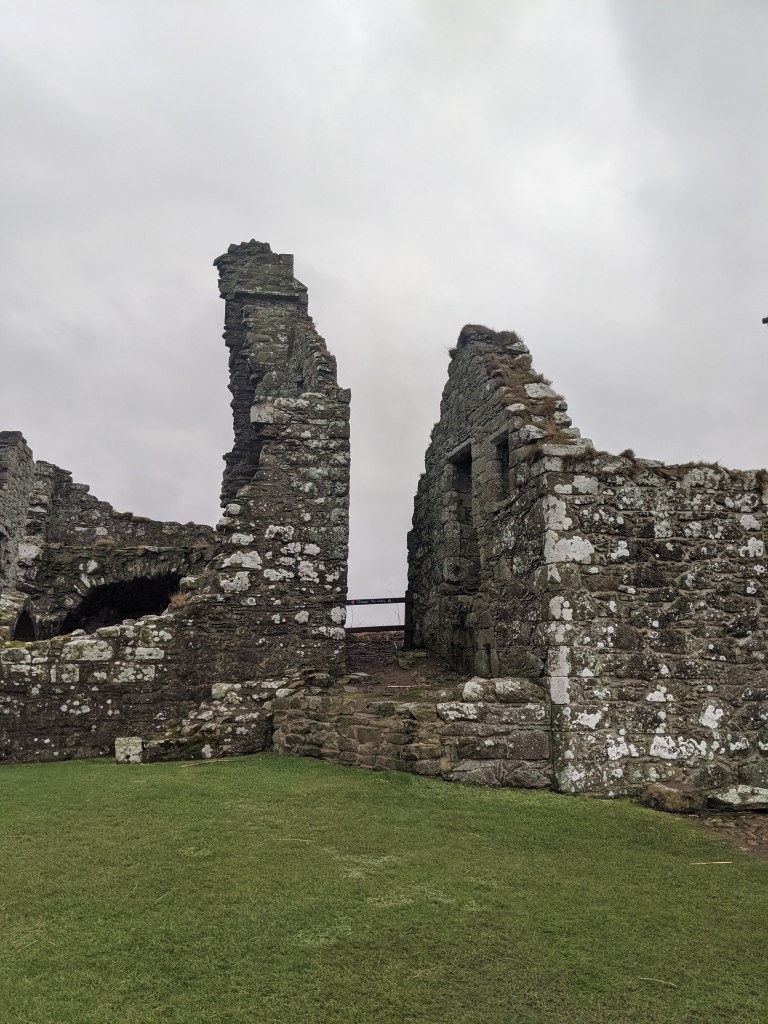 After our stop at Dunnottar Castle (which, by the way, is what the castle in the animated movie Brave is based on!), we drove about half an hour more to Aberdeen to spend the afternoon. My only complaint about this tour was that I wish we had spent more time at the castle. The views and sea were so peaceful, and I felt a little rushed wandering through the ruins. We ended up having *so* much time in Aberdeen and didn’t really know what to do with it. 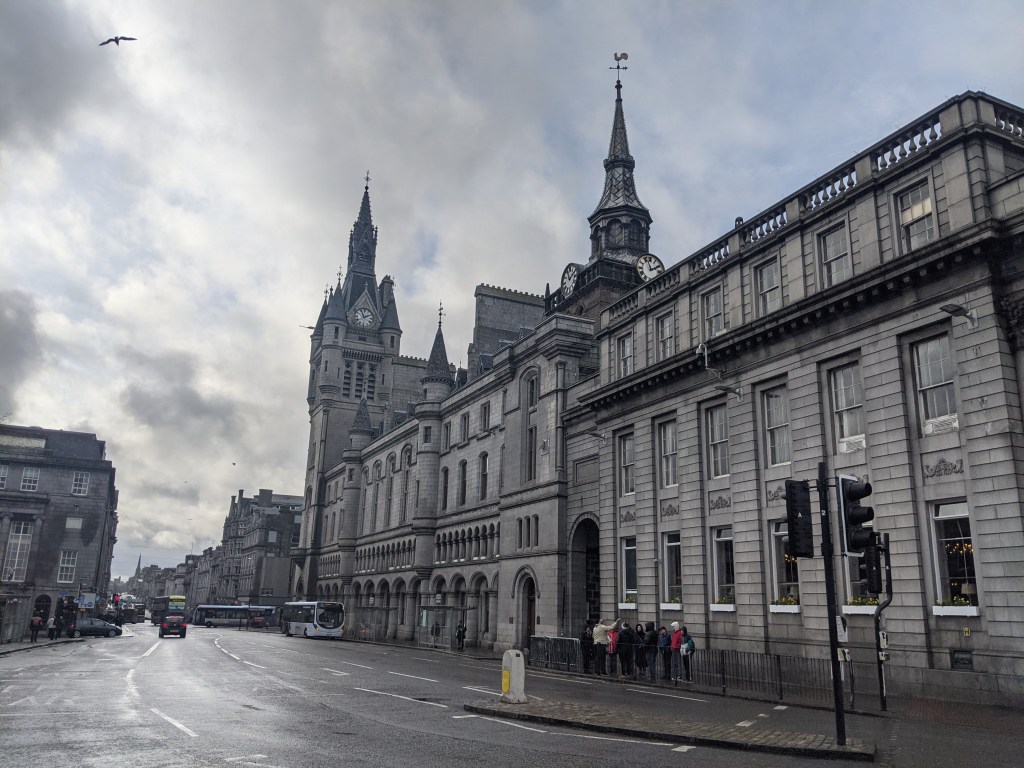 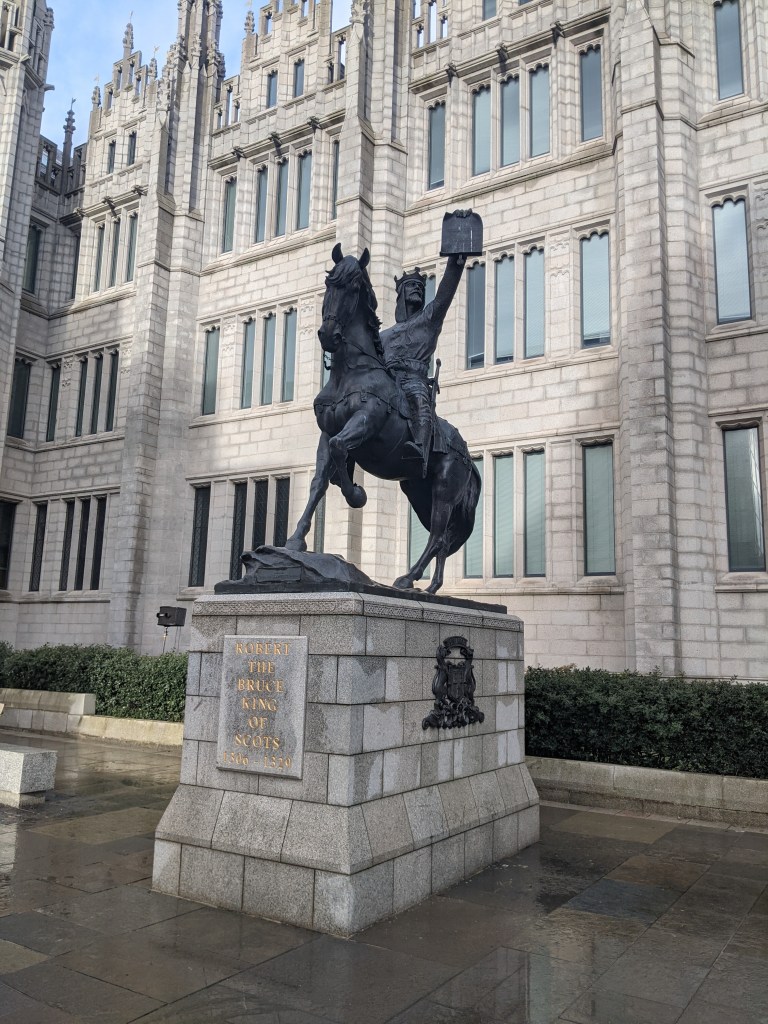 My friend and I wandered around a few streets and admired the architecture—I guess Aberdeen is known as the Silver City because all of its buildings are “silver” in color due to the widespread use of granite. I personally think that name is a little misleading, since Nevada is known as the Silver State for actual silver, but hey, who am I? We stopped into a charity shop, where I found the perfect velvet jumpsuit for my ABBA disco this Saturday, and then we got snacks at a little bagel café. We finished our stop at Aberdeen by walking to the beach and taking in the views (and sounds) of the North Sea. By now, the sun had come out and it was absolutely beautiful! I thought the offshore windfarm in the distance was really cool, but my friend thought it was ugly. The beachfront was the highlight of Aberdeen for me, and I could have spent hours there just taking in the views. 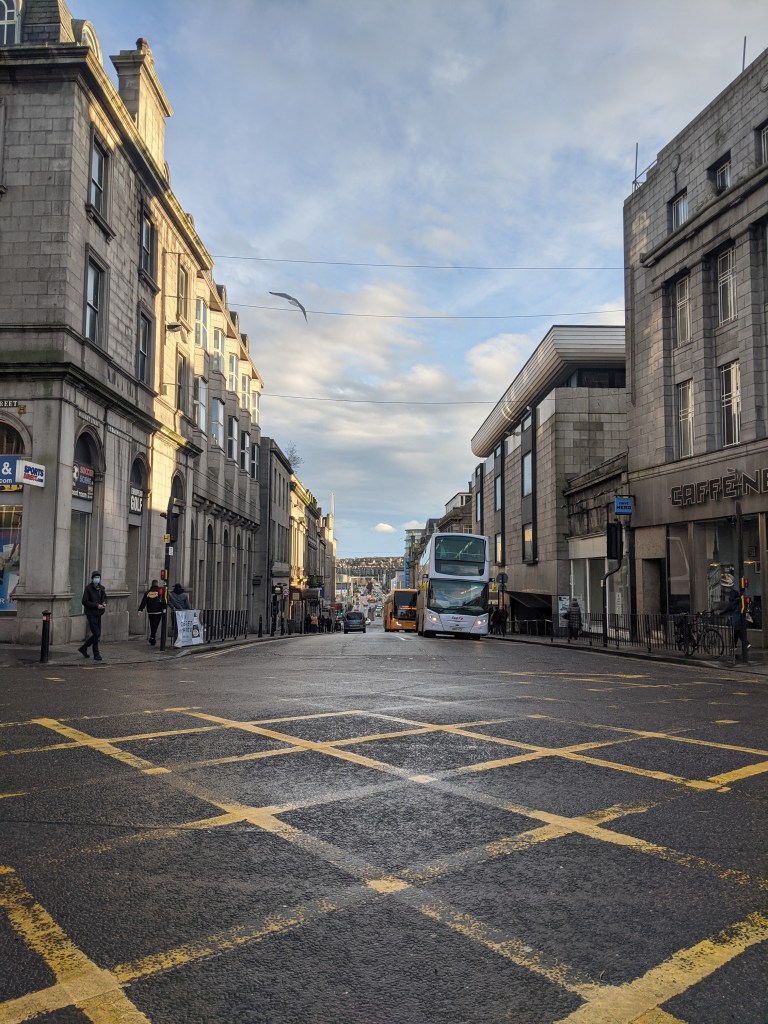 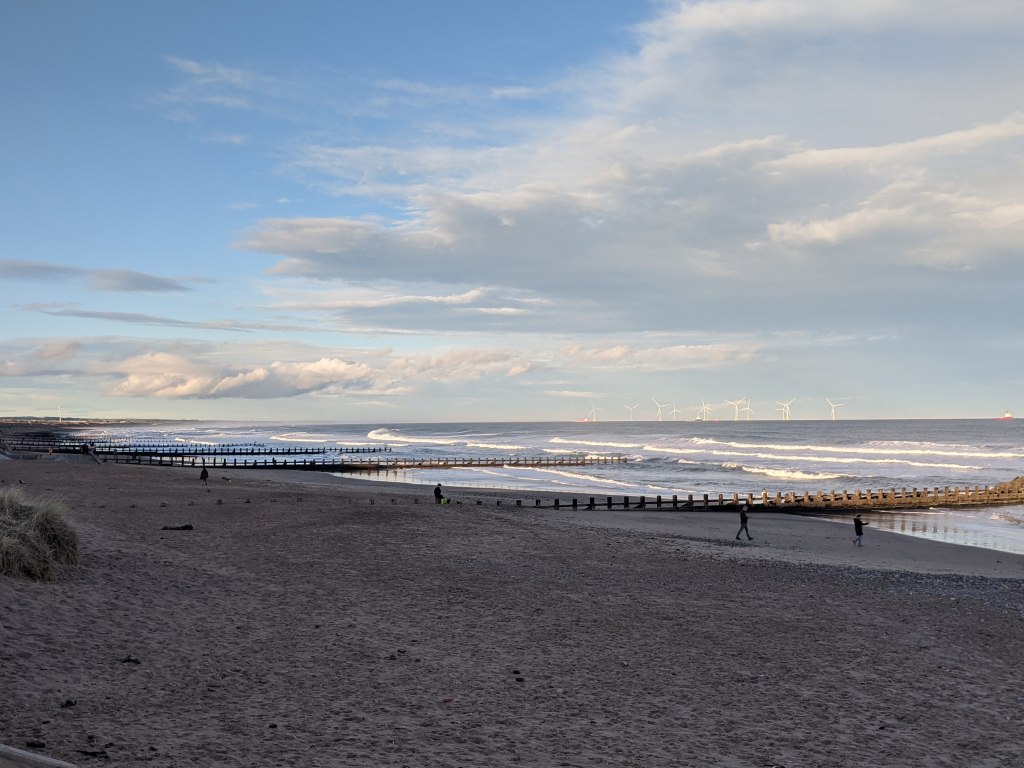 On the bus ride back, we watched the gorgeous sunset over the rolling green hills of Scotland’s countryside. The tour guide also played Brave for us. Even though I watched the movie right before coming to Scotland, it was cool to see it again and recognize the resemblance of the film’s castle to the one I had just toured.

Overall, it was another great day of exploring some of the beauty that Scotland has to offer. I hope you enjoyed today’s post, and as always, thanks for stopping by!

14 comments on “A Day Along Scotland’s East Coast”