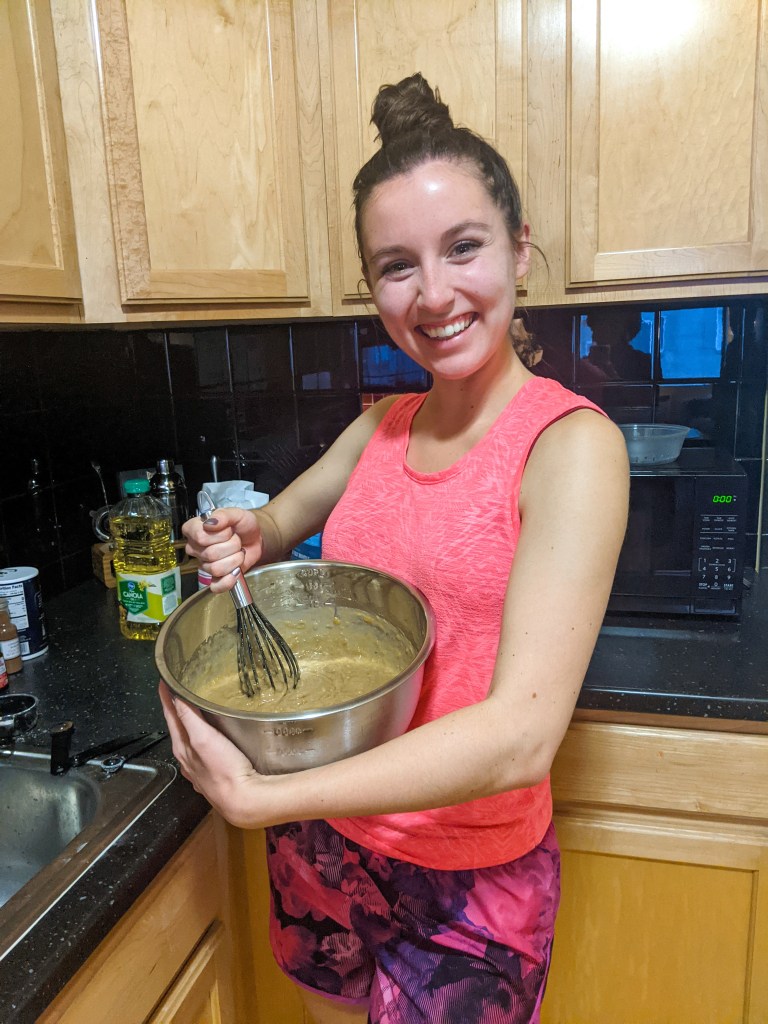 Today’s post is going up so late because I spent the past six hours with a friend procuring a pumpkin and making gluten-free pumpkin bread from scratch… It was an ordeal, but thank goodness the loaves turned out yummy! I also asked him to take a cheesy picture of me mixing the batter like in a 1950s housewife commercial for today’s cover photo—I think we nailed it. In other news, this past week marked halfway through the quarter, which meant I spent a bulk of my time studying for two midterms. The weather was also kind of all over the place, from rainy and cold, to windy, to pleasantly warm, so here are my equally all-over-the-place outfits! 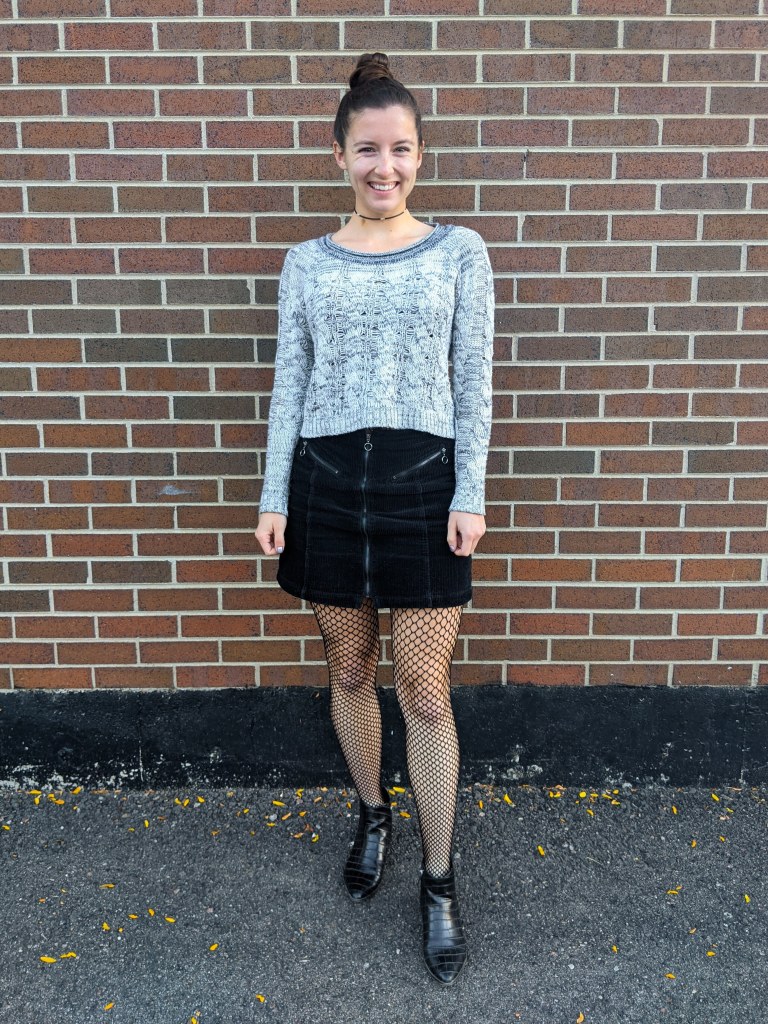 Today in my capital punishment class, we watched the movie Dead Man Walking, which is based off a true story of a death row inmate. It was a really thought-provoking film, but boy, what a downer way to start the day! We all left class feeling very heavy. I had my two psych classes in the afternoon and spent the evening studying and working on my blog post.

I’ve worn this edgy winter outfit before, and I enjoy trying to find cute ways to incorporate fishnets into everyday outfits. They seem more like a scandalous, going out kind of accessory, but I think they’re too fun to save only for those occasions. 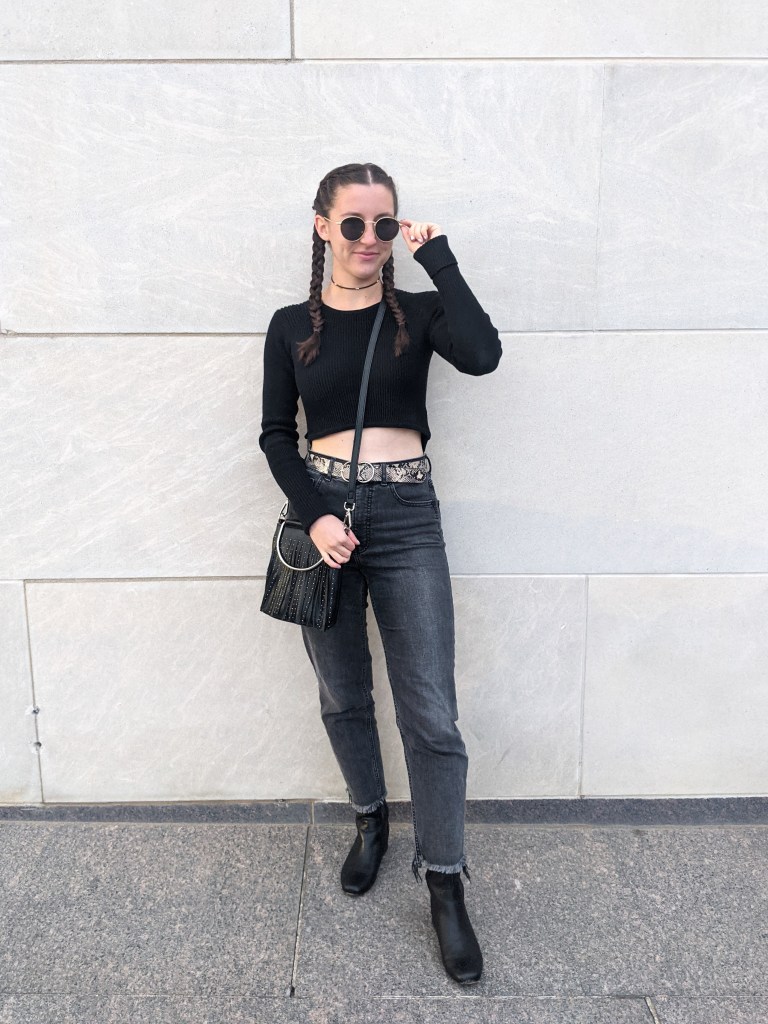 I spent the whole day doing homework and studying for my other psych midterm. After wine class, I squeezed in some blog photos on campus before what was supposed to be playoffs for the soccer team for which I’ve been guest playing. I drove halfway to the fields before my cousin called me and said all the lights were off—nobody was there! I’m still not sure how exactly playoffs secretly were cancelled, but it was a very anticlimactic way to end the season. I decided to grab DQ on the drive home and tried a new blizzard flavor, only to find out after my second bite that it had brownie chunks in it! I’m allergic to wheat, so I was a little annoyed DQ always loves to sneak brownie bites into their blizzard flavors, even when that wasn’t listed anywhere on the menu. I expected to feel like crap all night (obviously, I ate the blizzard anyway) but thankfully I didn’t really experience any side effects. 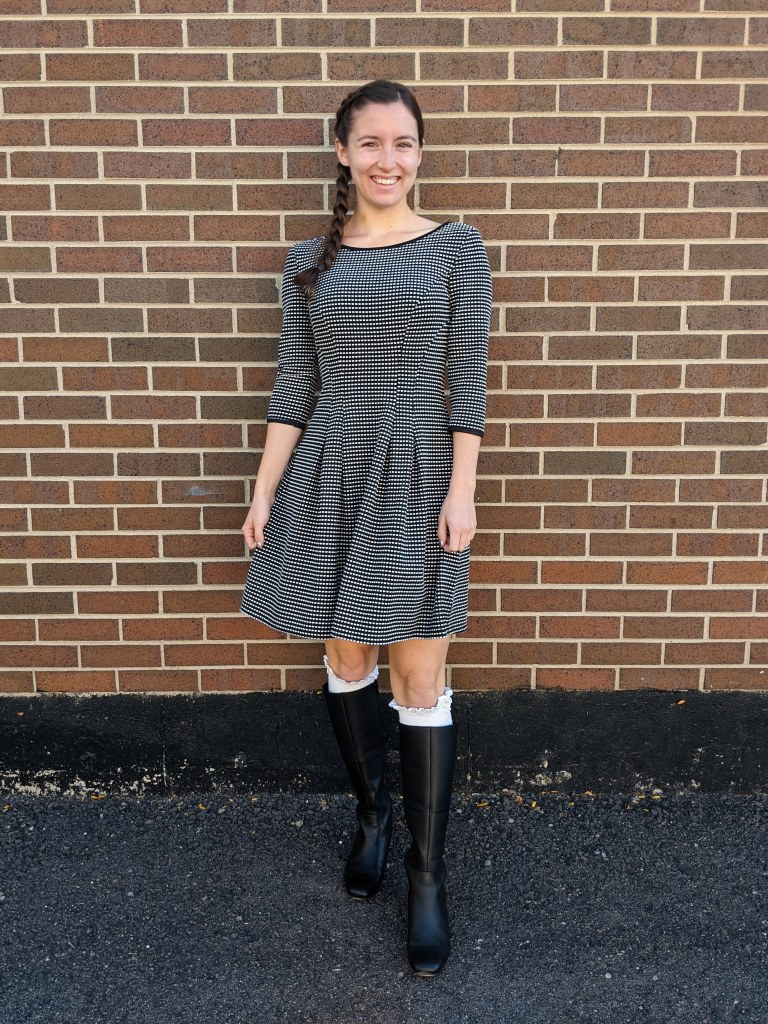 I went to my capital punishment class in the morning before taking my psych midterm—thankfully it was pretty easy! In the afternoon, I hung out with a friend before spending the evening starting the show “Orange is the New Black” and going to an improv show on campus.

This old-fashioned dress is one of my favorites. It’s the brand Max Studio from Nordstrom Rack, and I consider it a staple in my winter wardrobe—the fabric is thick and cozy, perfect for looking professional even in the cold. 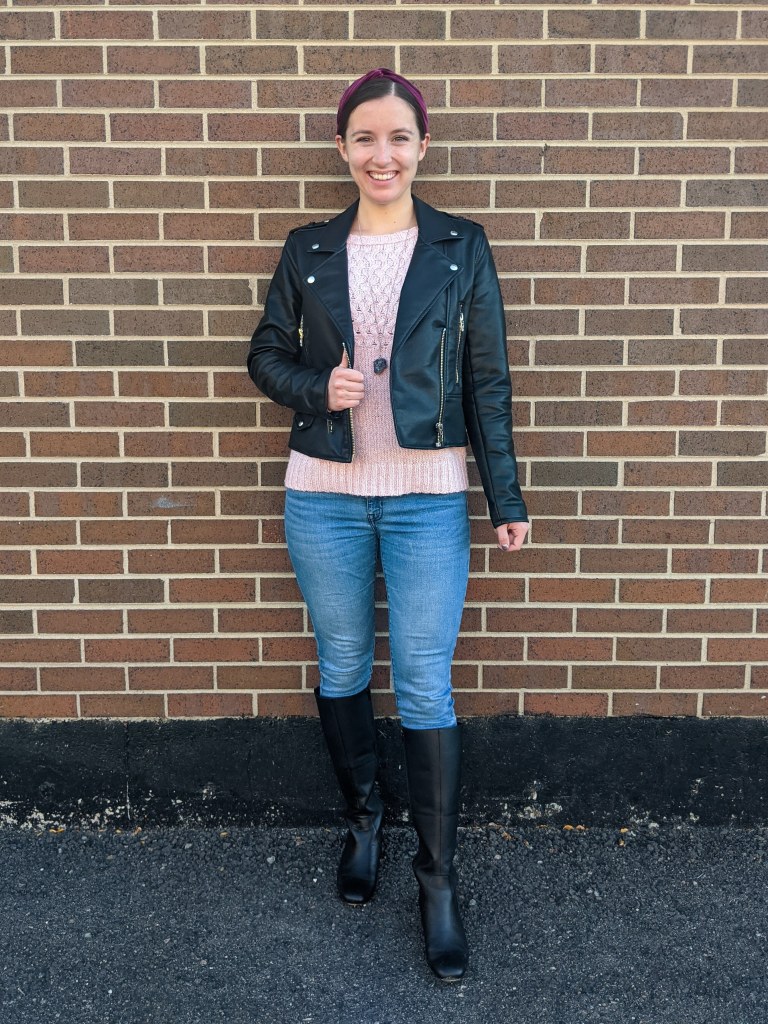 I spent today running around the apartment, trying to complete some chores and studying for my wine class midterm. No, the wine midterm did not have a tasting portion—it was just multiple choice—but the professor so kindly bought us some wines with his own money as a celebration for passing the test.

I liked the way my maroon headband looked with this outfit, but something about this photo is not jiving with me—I guess the look wasn’t as cute as I thought when I saw it in the mirror. 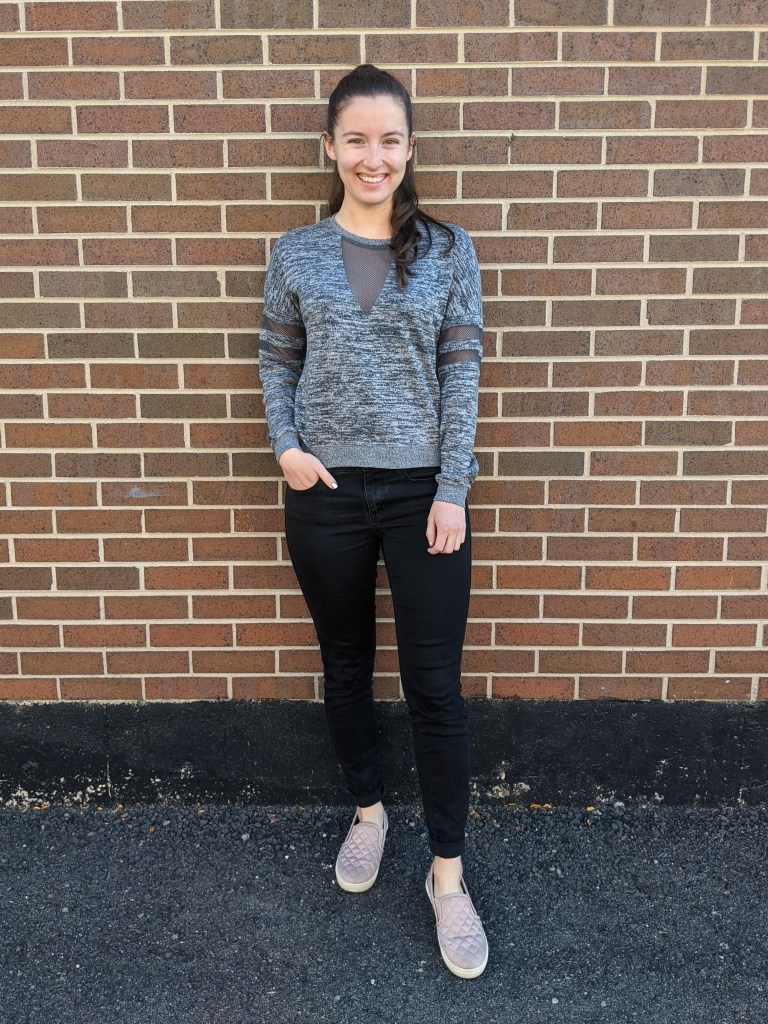 I spent the morning hanging out with my grandma at her place before writing my student newspaper article in the afternoon—this week I wrote a review for the hit show “Squid Game”. I went to my friend’s house later in the night to play Just Dance and watch a show we’re binging together. I think this grey mesh sweatshirt is really cute, but I never know how to style it! I always end up pairing it with these black pants, which is a rather boring outfit. 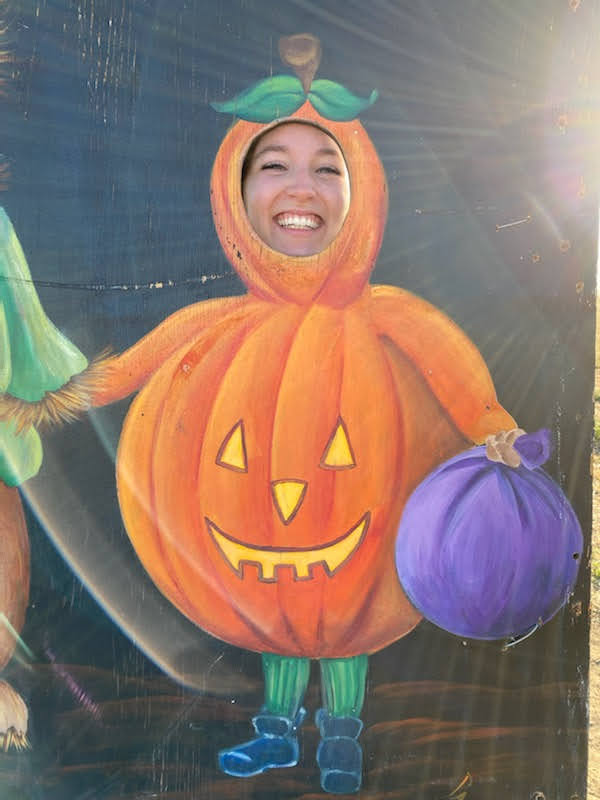 I took some blog photos this morning before going to a pumpkin patch with a friend of mine. For as long as I can remember, my brothers and I have loved taking pictures with our heads in these cutouts—I made my mom an entire scrapbook for Mother’s Day two years ago just with pictures of us in these cutouts from over the years. They crack me up! The pumpkin patch had a beautiful view of the mountains, an awesome corn maze (which we meandered through while sipping on quintessential pumpkin spice lattes), and of course, some great photo-ops. We got dinner together and then started watching the new Netflix show “Midnight Mass”—lots of TV this week. 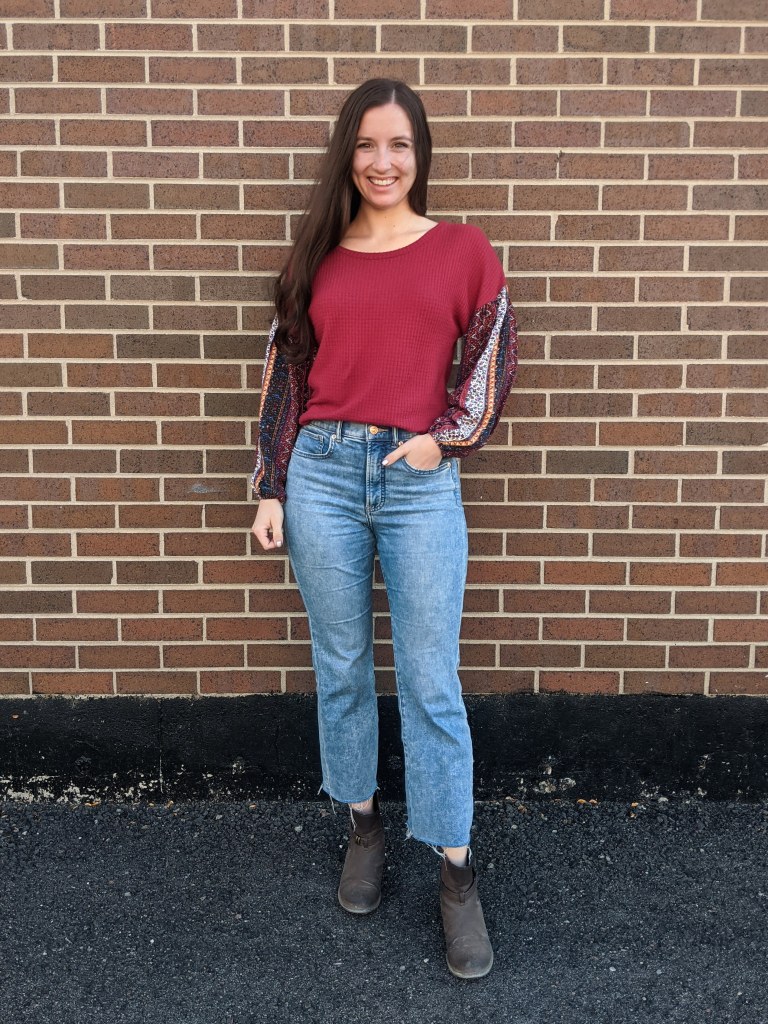 I had a lazy morning before my friend and I met up to go to a pumpkin patch so we could make pumpkin bread from scratch with an actual pumpkin (I had never done that before, but he had). In hindsight, we should’ve just purchased a pumpkin from the grocery store because the patch we went to, which wasn’t close to campus, was SO lame. It wasn’t even a real patch! It was a mound of pumpkins in the center of a field that were pre-cut and not in great shape. So really no different than just grabbing a pumpkin from the grocery store. I felt totally gipped because the place had great reviews when I looked it up online.

Anyway, it became a two hour outing just to get one mediocre pumpkin… And I didn’t realize how long the pumpkin baking and skinning process would take. The bread also took much longer to bake than the recipe said, perhaps due to the altitude here in the Mile High City. Regardless, I was not expecting to spend the entire second half of the day making this bread, but by golly at least it’s good. I was going to be very bitter if it ended up tasting gross.

I thought this outfit would be cute for the patch, but it looks kind of frumpy in this pic. The booties aren’t great with the cut of the jeans, and I think a long necklace would’ve helped break up the top (I was wearing it with a choker earlier in the day, but the shirt is rather blockular without some sort of pendant).

Aside from Tuesday’s look, I thought this week’s outfits were a little lackluster. I’ll have to step up my game next week because one of my best friends from high school is visiting me! I’m SO excited to show her around Denver, so naturally, I’ll have to think of some cute outfits for all the photo-ops.

As always, thanks for stopping by the blog, and I hope you had a great weekend!