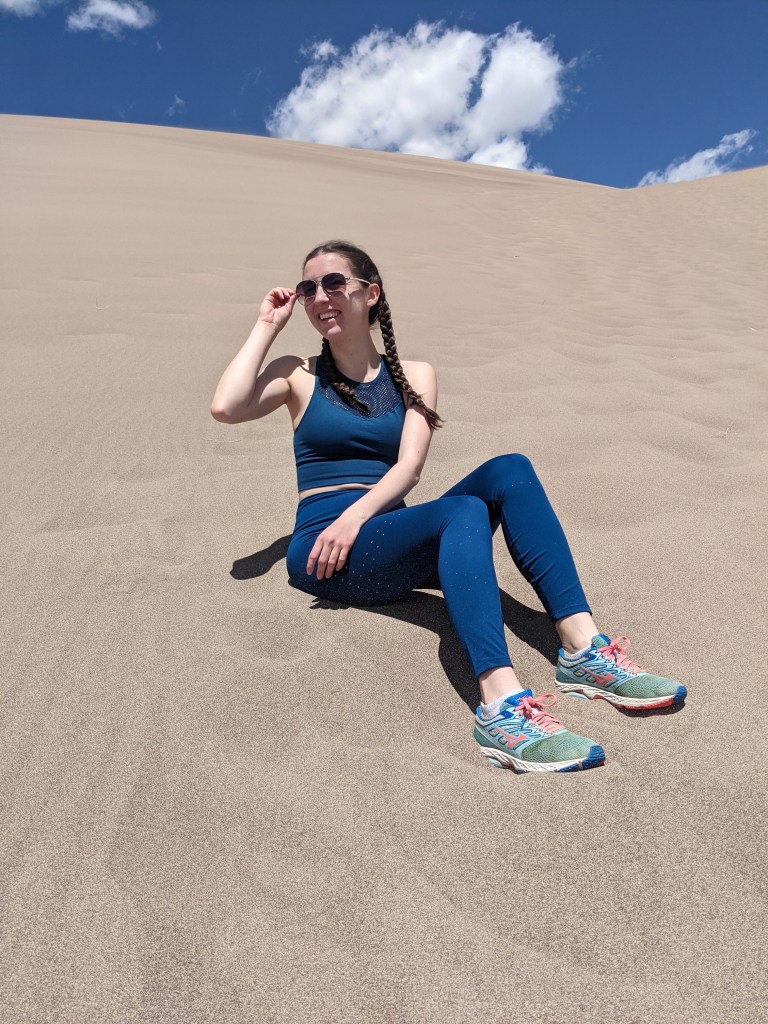 It’s been forever since I’ve had any travel-related blog posts to share (for obvious reasons), so I’m extra excited to talk about my visit to Great Sand Dunes National Park and Preserve this past weekend. The great sand dunes are located 232 miles slightly southwest of Denver, Colorado (almost a four-hour drive), and they are the biggest sand dunes in North America. I’ve been wanting to visit them ever since I first heard of the dunes back during my freshman year of college! 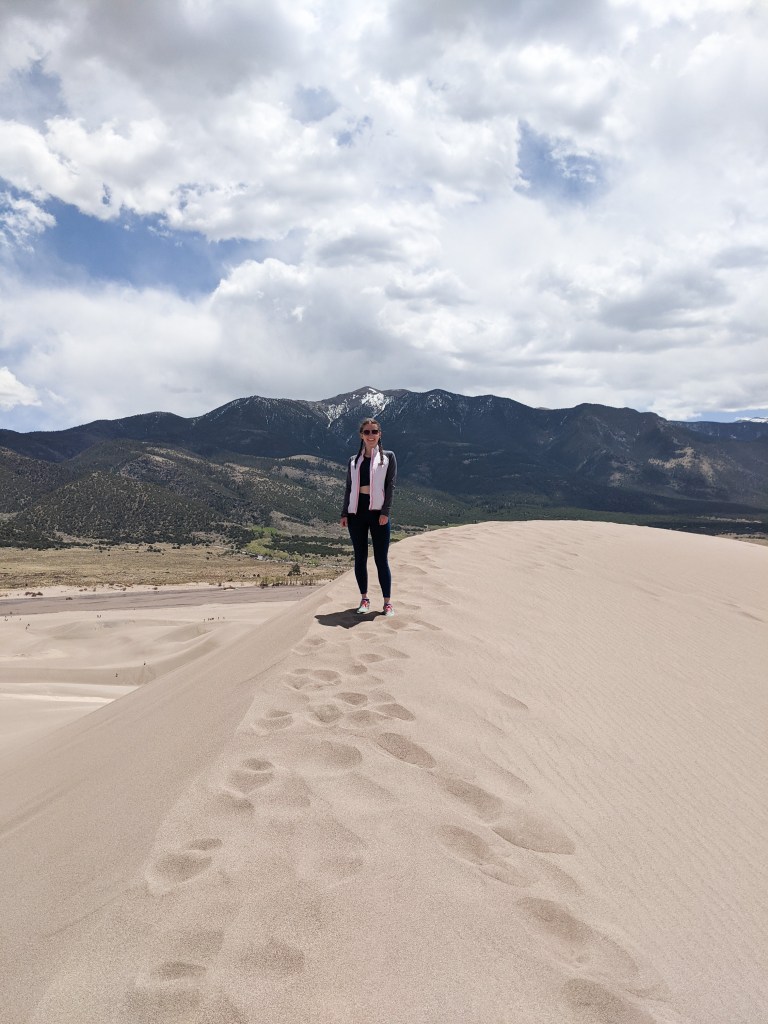 A Little About the Geography…

The geography in the area surrounding Great Sand Dunes National Park is very… odd. The dunes rest in the San Luis Valley at the base of the Sangre de Cristo mountains, so there are mountains all around you (some still with snow on them) and then these giant sand dunes right next to them. It’s the craziest thing! You go from standing in the mountains one minute to standing in the middle of what feels like a huge desert, with sand as far as the eye can see. The San Luis Valley was an ancient lakebed, so over time, the windy climate of the valley blew all the lake sediments to the base of the mountains to form these massive dunes. Pretty cool, huh? There are points of interest throughout the valley with pull-offs and signs to read about the dunes and the history of the area. Lots of it is information I’ve been learning in my Geography of Colorado class, which is really exciting! 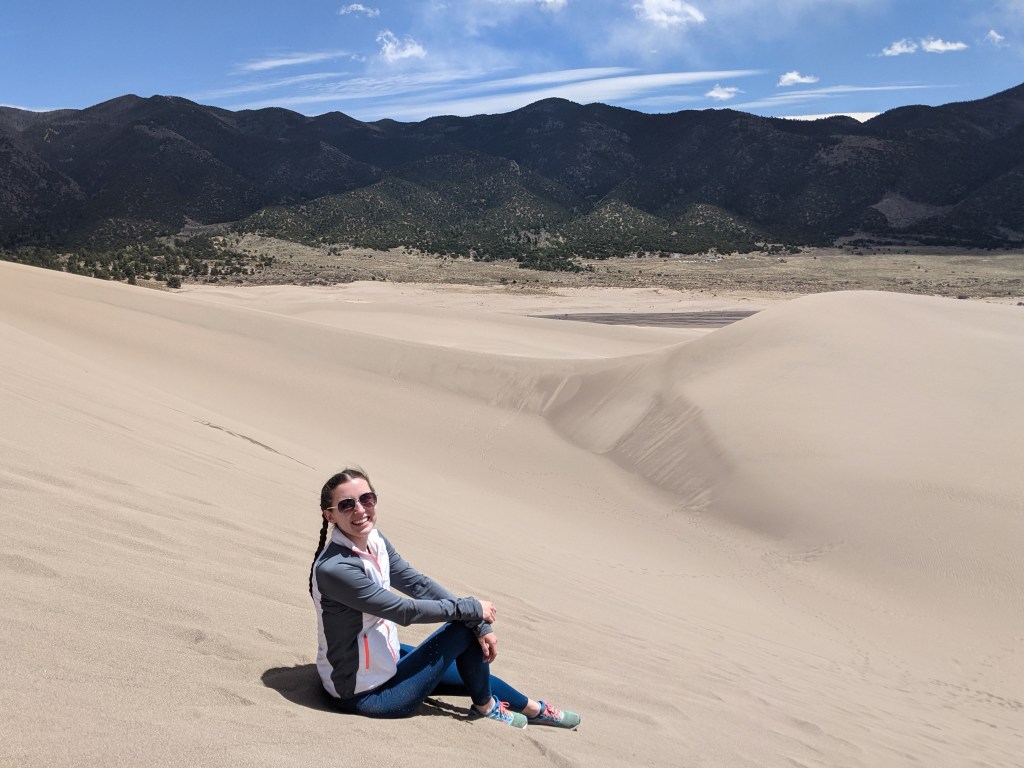 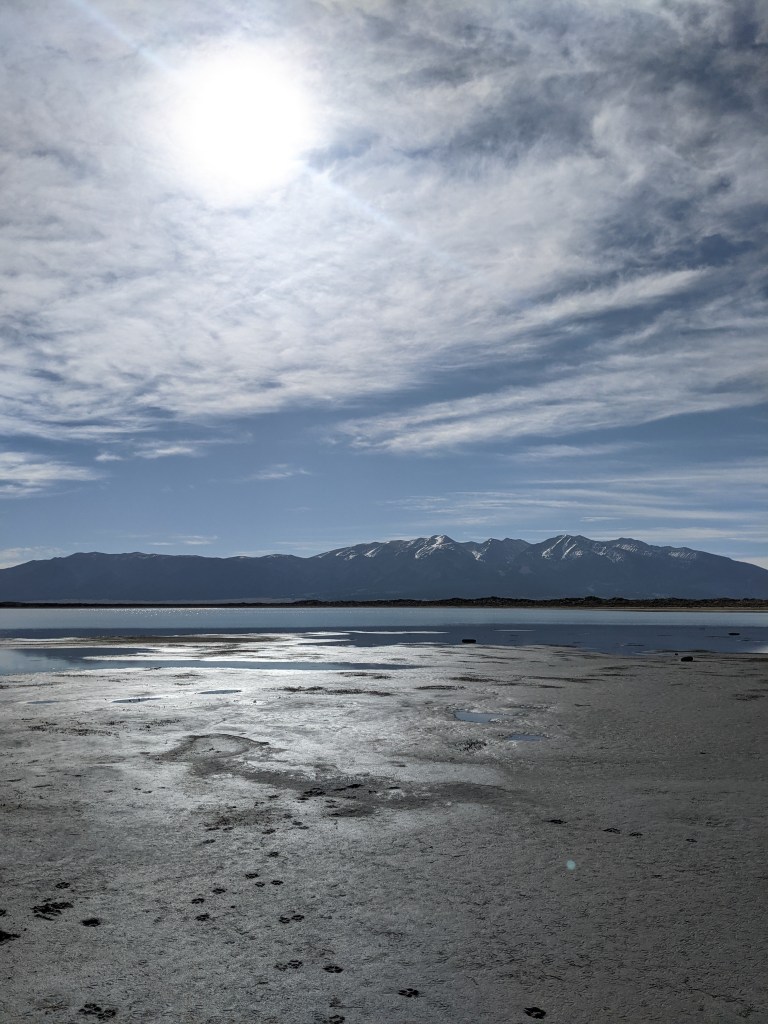 Above: The smelly lake at San Luis Lakes Wildlife Area

I lovvvvve camping but haven’t done it in forever, so when I told my boyfriend I wanted to visit the sand dunes, we decided to turn it into a weekend camping trip! There are several campsites in the area, including one in the national park, but most of them required reservations and were already booked for several weeks out. We decided to ‘risk it for the biscuit’ and try to camp at the Zapata Falls Campground a few miles from the sand dunes, which is a first-come, first-serve campsite. Not surprisingly, we didn’t get there soon enough to secure a spot. The race (and stress) was on to find another place to set up camp before nightfall, and thankfully my boyfriend remembered hearing about a less-publicized campground nearby.

We arrived at the San Luis Lakes Wildlife Area and sighed a breath of relief to see that there were several camping spots still available. The area used to be a state park before being converted into a wildlife preserve a few years ago. Our first impressions of the place were skeptical, as it felt very apocalyptic and eerie… The buildings were extremely run-down, and the only other people in the park were staying in RVs. It was several hours before I saw another human being! I thought for sure there must be zombies living in the RVs, just waiting until it got dark to feast on our flesh. But hey, we lived to tell the tale. My boyfriend and I were actually the only campers who were staying in tents, and it did not take us long to realize why…

Remember how I said wind formed the sand dunes? Yah, that wind is still blowing strong today. You can imagine the ordeal it was trying to set up our tent with huge gusts constantly buffeted us. I had to flop on the tent like a starfish to keep it from blowing away as my boyfriend frantically tried to set up the poles and stake it to the ground (which of course was sand and therefore did not hold the stakes very well). Unlike a stereotypical campground, which is forested and smells of pine, this campground was on the valley floor in a desert landscape. There were no trees, there were no twigs to whittle into fire pokers, and there was nothing to act as a windbreaker to shelter us from the huge gusts (except for large metal walls built behind each camp spot’s picnic table—that should have been our warning sign).

While it’s possible the Zapata Falls Campground would be less susceptible to wind, as it was more in the mountains with surrounding trees to block the gusts, I imagine camping anywhere in this valley would involve difficult weather. I especially would not recommend camping at the San Luis Lakes Wildlife Area. We had a blast and made the best of the situation, but the wind made it difficult to enjoy our time outside. It also made for a rather stressful camping trip, instead of a peaceful one, because we were constantly worried our tent would blow away or break. The campground had running electrical outlets at each spot, which was a plus, but there was no water pump. We ended up starting fewer campfires than we otherwise would have because we didn’t have enough water to put them out. 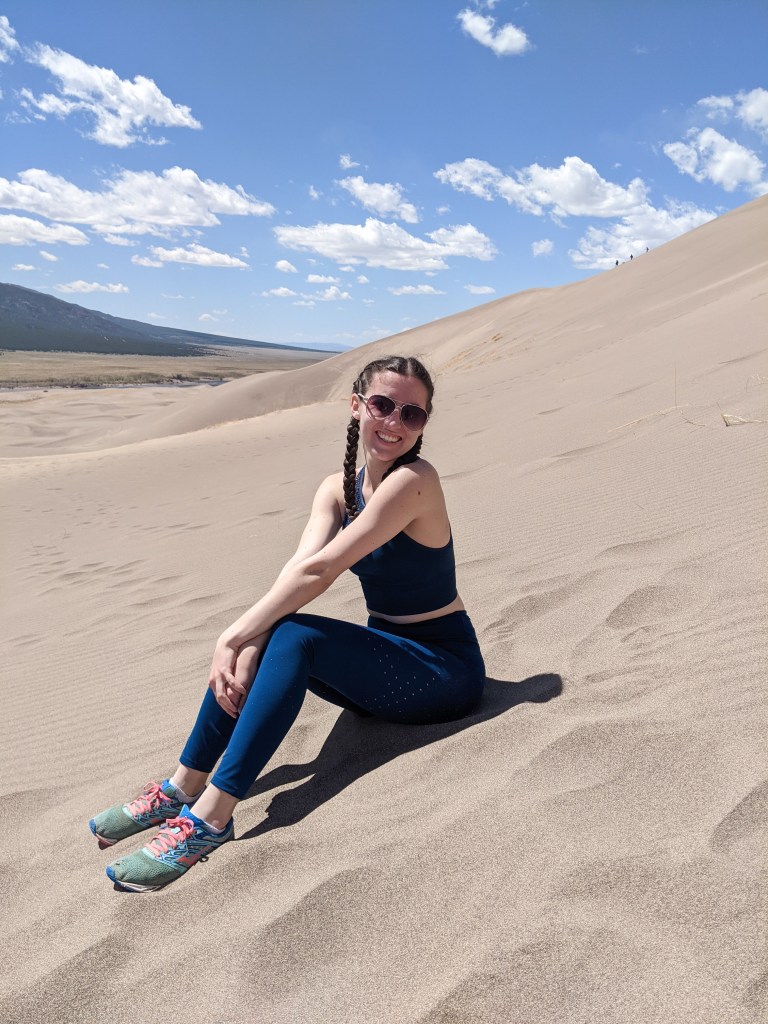 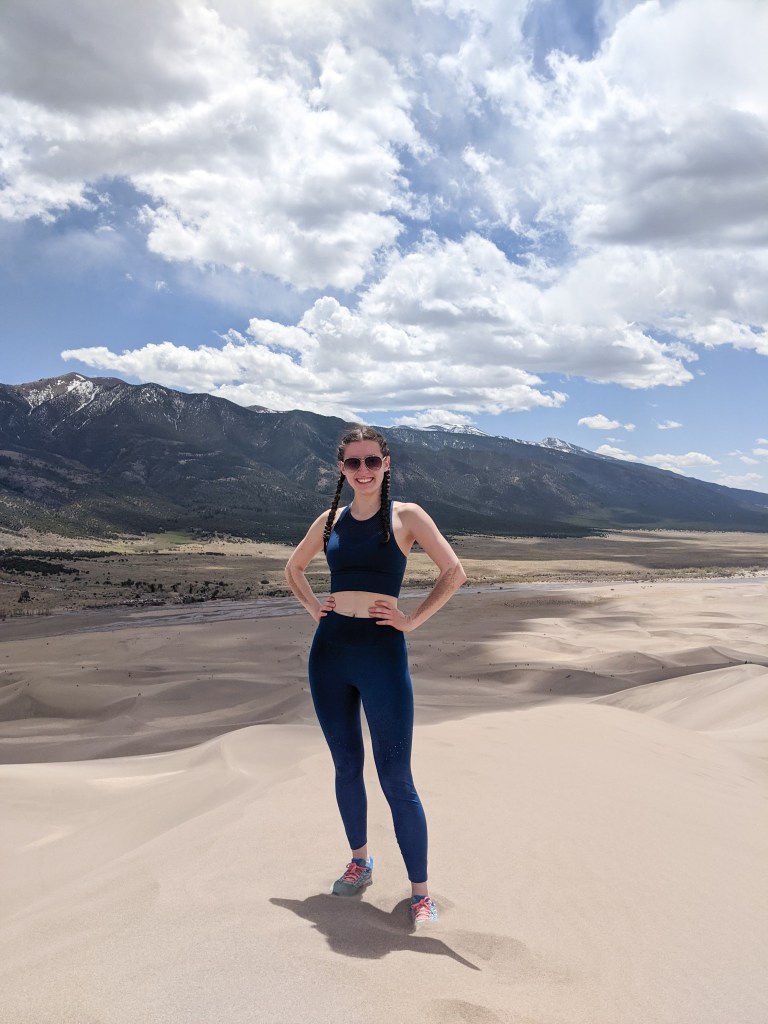 After being denied at the Zapata Falls Campground and setting up our tent at the wildlife preserve instead, we drove to the nearby town of Mosca to purchase a wildlife preserve pass, which was necessary to stay at the campsite. I think it ended up being $45 for a year, which is kind of expensive for just two nights of camping. Hopefully next time we go, we can find another preserve to camp at so we get more bang for our buck! Thankfully, we found two tree branches outside of the general store where we bought our pass, which we took back to the campground with us. As my boyfriend started a campfire, I whittled the branches into the perfect fire sticks for marshmallows. We ate dinner, played backgammon, and made s’mores once it got dark. I also saw three shooting stars!

We woke up early (who really sleeps well while camping?) and had a quick snack breakfast before exploring the waterfront of our campground’s lake. Then we drove to Great Sand Dunes National Park! The first thing we did at the park was walk around the Visitor’s Center before finding a parking spot near the base of the dunes. While lots of people rent sleds and wooden snowboards to ride down the sand dunes, we instead decided to hike to the top of the tallest one we could see. Thankfully it wasn’t very hot out, but the hike was still tiring! Walking in sand is so much more difficult than solid ground, and several parts of the hike were really steep. When we finally reached the top of the dune, we struck up a conversation with a nearby man, his wife, and his brother, who were all from Nepal. The man is a trained Sherpa in the Himalayas, so we had such a great time hearing some of his stories and learning about his culture! The conversation was definitely a highlight of the trip.

After walking back down the dunes, which took a fraction of the time, we hopped in the car and drove to a trailhead in the park, where we at our lunch. It was getting increasingly windy and stormy, so we decided to return to our campground and check that our tent was still there. Right when we arrived, a massive dust storm rolled in and enveloped the campsite. We watched as our poor tent temporarily collapsed, but thankfully nothing broke! Once the storm passed, we hopped in the car and drove to Alamosa, which is the nearest city, but there wasn’t really anything interesting to explore.

We ended up back at our campground, but it was still so windy out that we played a few card games in the car. We then played a game of chess in the tent (I won!) before the wind finally died down enough for us to make dinner. It was another fun night of s’mores and stargazing!

We woke up, packed up all our things, tried to get as much sand out of our tent as possible, and then hit the road back to Denver! 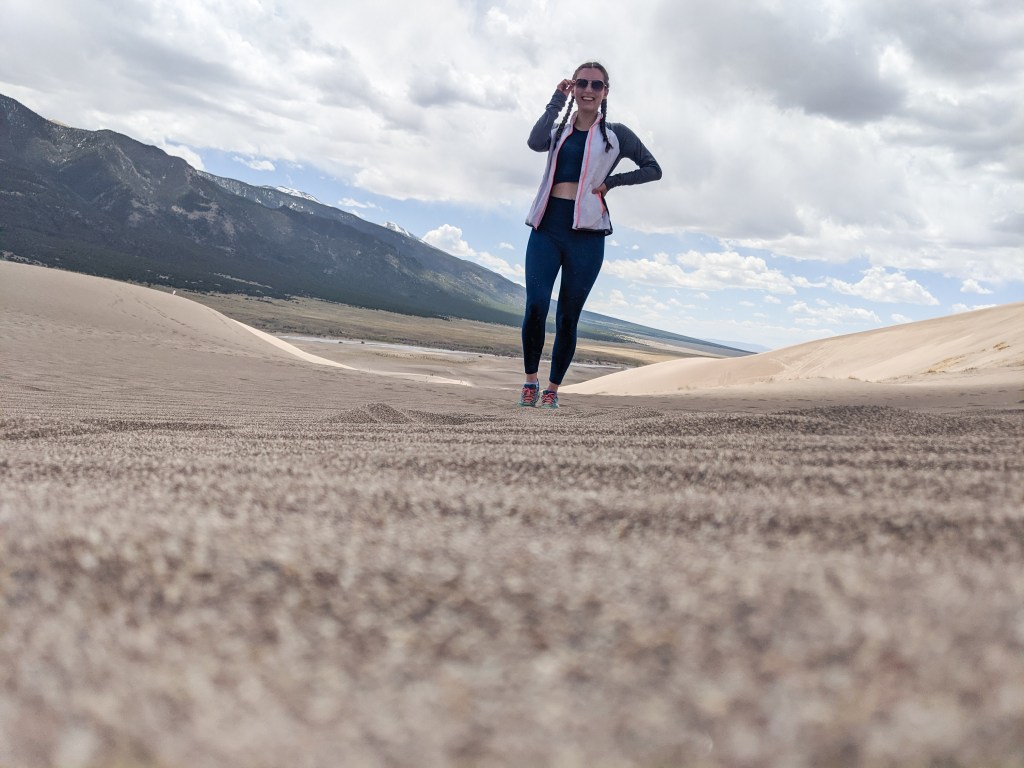 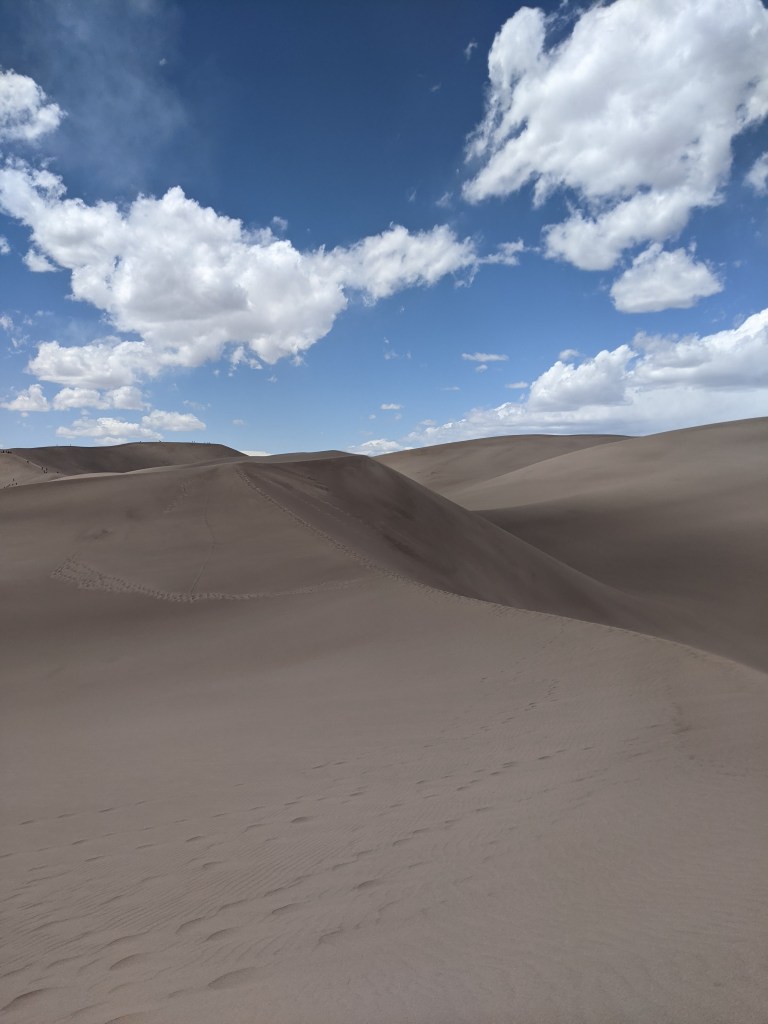 Above: A big storm cloud covered the dunes in shadow

A tent and two sleeping bags were the only real camping supplies my boyfriend and I had, so we were very creative when it came to food. The first night we used our whittled sticks to cook hot dogs, which we brought from Denver and kept cold in a very tiny cooler. I had packed oatmeal to make for breakfast with boiling water on the fire, but we ended up just eating granola bars and fruit instead because we didn’t have enough water to put out any additional campfires. For lunch on Saturday, we packed cans of tuna to eat with crackers and those snack-packs of olives. And for dinner that second night, we warmed up a big can of chili in a pot over the fire! I was worried we would be hungry during the trip, since we didn’t have a real cooler to keep food cold, but we were well-fed and happy the whole time.

When you visit the sand dunes, I absolutely recommend wearing long pants and sleeves. When the wind picks up—and you know it will—the sand in the air can really hurt as it blows into your skin. Staying covered up will shield you from some of this pain! It also keeps you from getting sunburnt. Additionally, to keep the sand out of your eyes, I recommend wearing sunglasses and a hat. I wore this cute matching set from Target’s JoyLab line and only took off my jacket and hat for pictures! 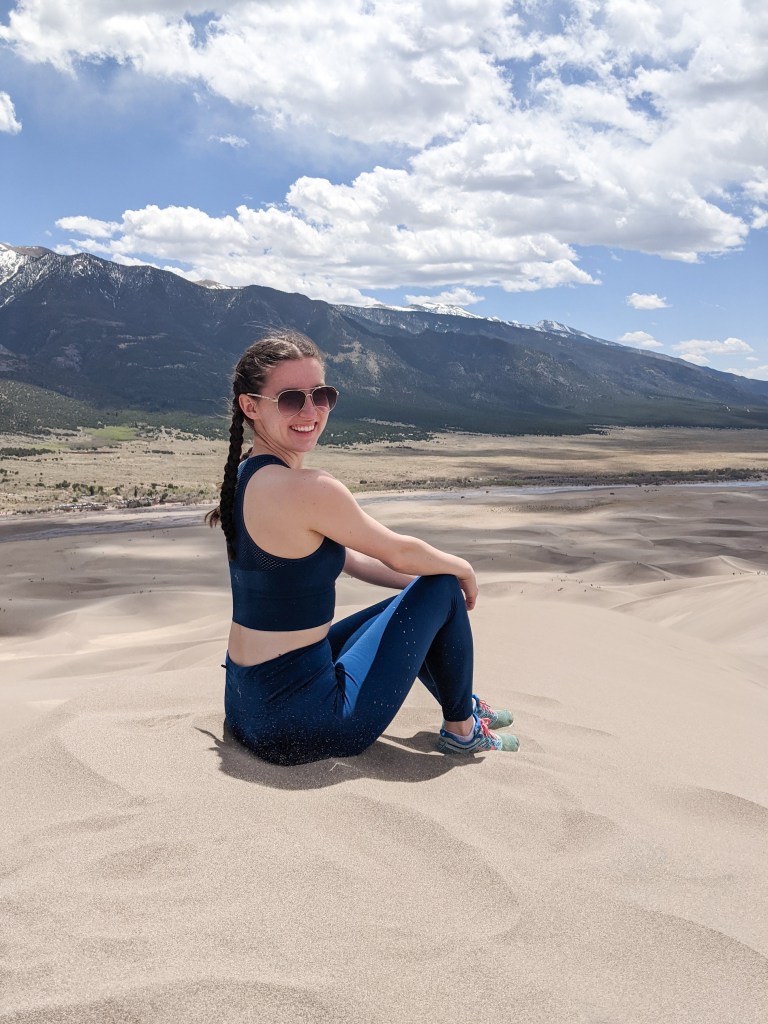 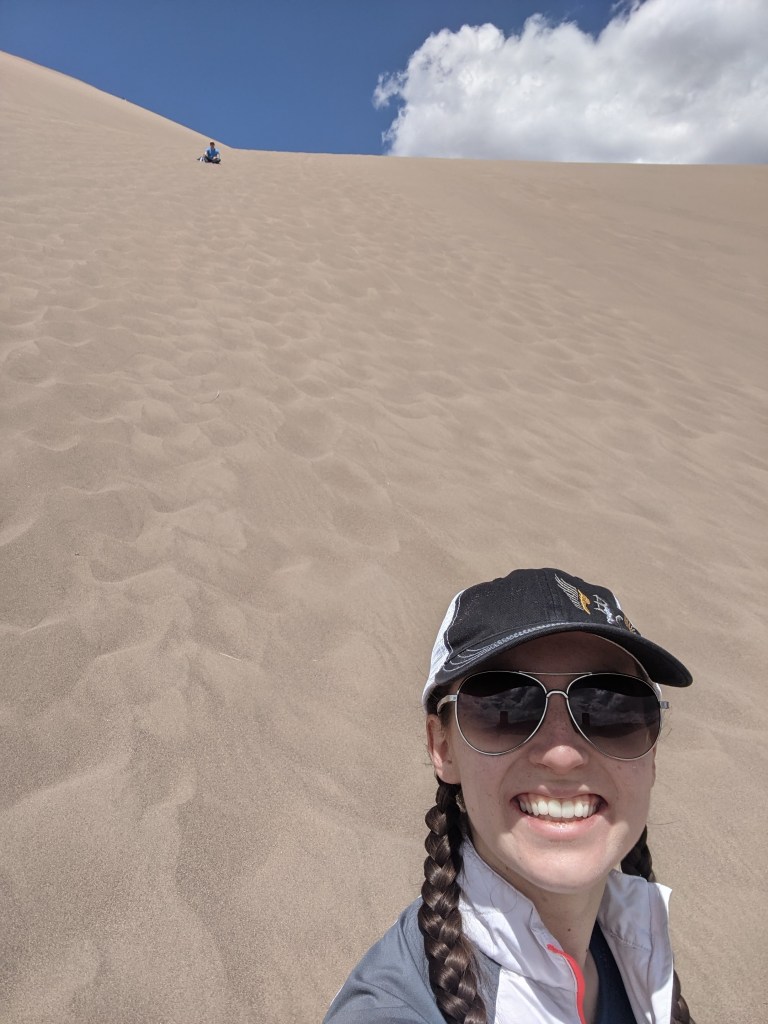 Above: That’s my boyfriend way up there! 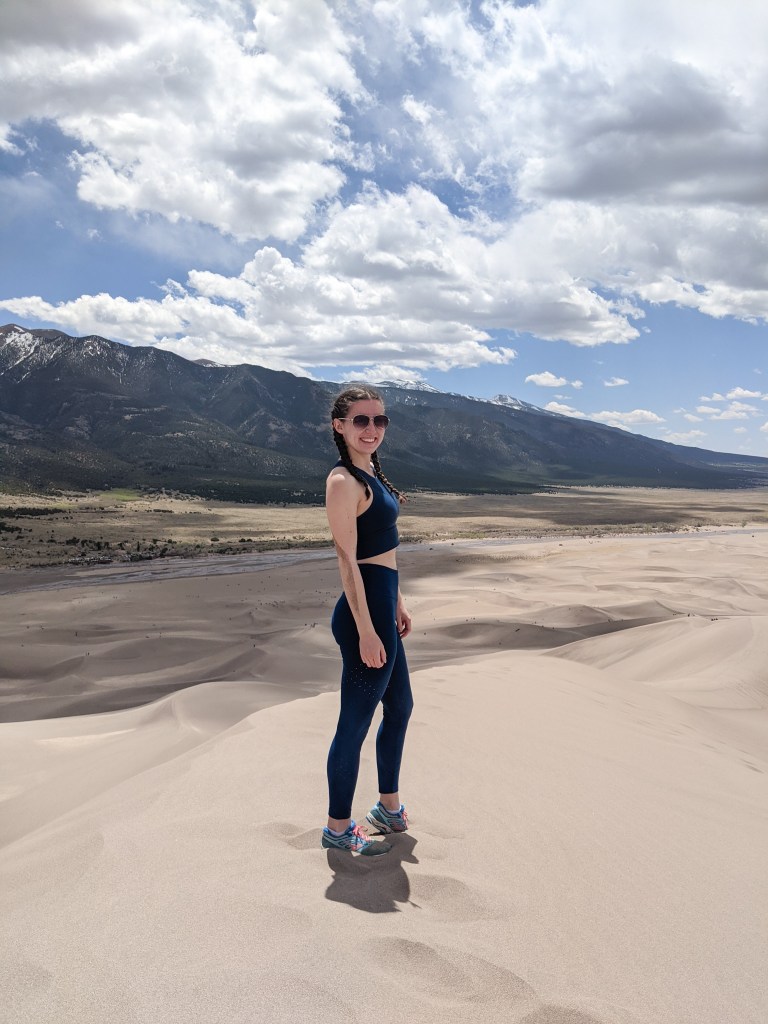 And that’s a wrap! While it wasn’t quite the idyllic and peaceful camping trip we imagined, it was still SO much fun, and the great sand dunes really are a site to be seen. Let me know if you have any questions about the national park or the area, and leave me a comment below if you’ve ever been to any sand dunes yourself!