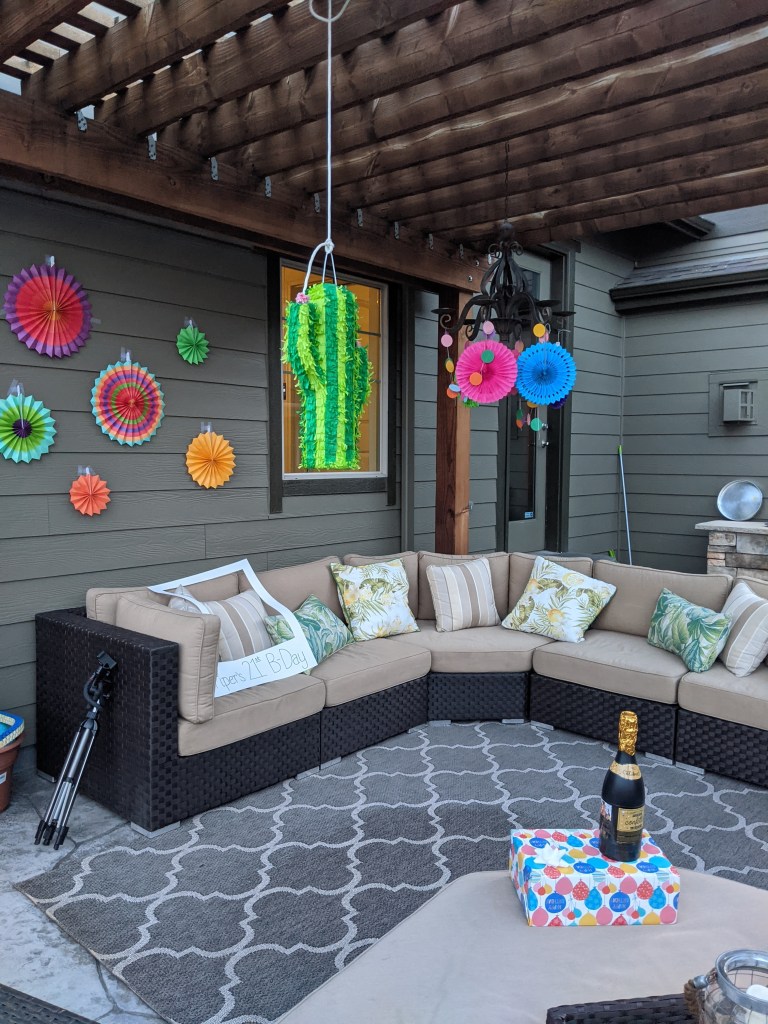 The day is finally here!! If you read my weekly recap posts, you’ve probably heard me mention a mysterious birthday celebration I’ve been planning for my friend over the past several months. The ‘party’ (term used loosely, considering there were only two of us in attendance) happened on Saturday and could not have been more of a success! I’ve always loved party planning, and the pandemic restrictions have added a whole new level of creativity to it (you may recall my free backyard ‘party’ post from over the summer). Obviously, this pandemic has crushed many 21st birthday dreams… so because my friend and I couldn’t go real bar hopping to celebrate her big day, I decided to bring the bar hopping to her!

I’ve had this idea since the early pandemic days—probably May or June—to celebrate a 21st birthday at home by decorating different rooms of the house as various themed bars. While there were several types of bars I was considering recreating (a tiki lounge, a karaoke bar), I ultimately decided on the following three: a tequila bar, a speakeasy, and a club. I am SO incredibly grateful to my aunt and uncle for letting me borrow their house for the night to make this at-home bar hopping possible! I could not have done it without all of their help.

My friend got screwed out of her birthday last year, since that was when the pandemic was just starting, so I knew I wanted to go all-out for her 21st. The festivities began when I dropped off an envelope for her a few days before the night of the party. Since the celebration was a surprise, the envelope contained an invitation outlining what to wear, what to bring, etc. It also had an ‘artifact’ from each bar—blindfolds, which were used for the piñata at the tequila bar; a riddle to solve, where the answer was the password to get into the speakeasy; and a homemade VIP All Access pass for the club. I also used a white poster board to create a large polaroid frame (like this one) that we carried from bar to bar to take photos.

On the night of the party, I picked her up in my car, which I had decorated with these window markers (by the way, they were super easy to wash off—would recommend!). The side windows had ‘happy birthday’ messages and little doodles, and the back window said “Honk for Birthday Girl” in big, bold letters. It was so fun getting lots of honks and waves on the way to my aunt’s house!

And now, onto the good stuff—the actual bars. I knew I wanted each bar to have a drink (duh), a snack, decorations, an activity, and a music playlist, so those categories are how I ended up planning the party. First up, the tequila bar! 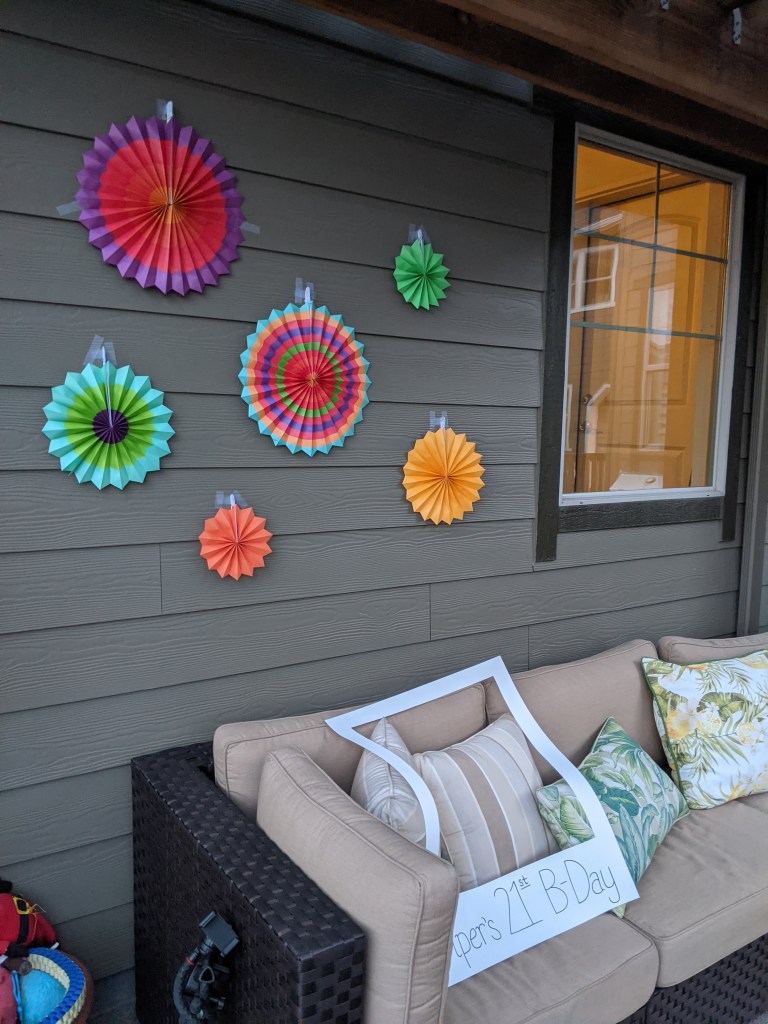 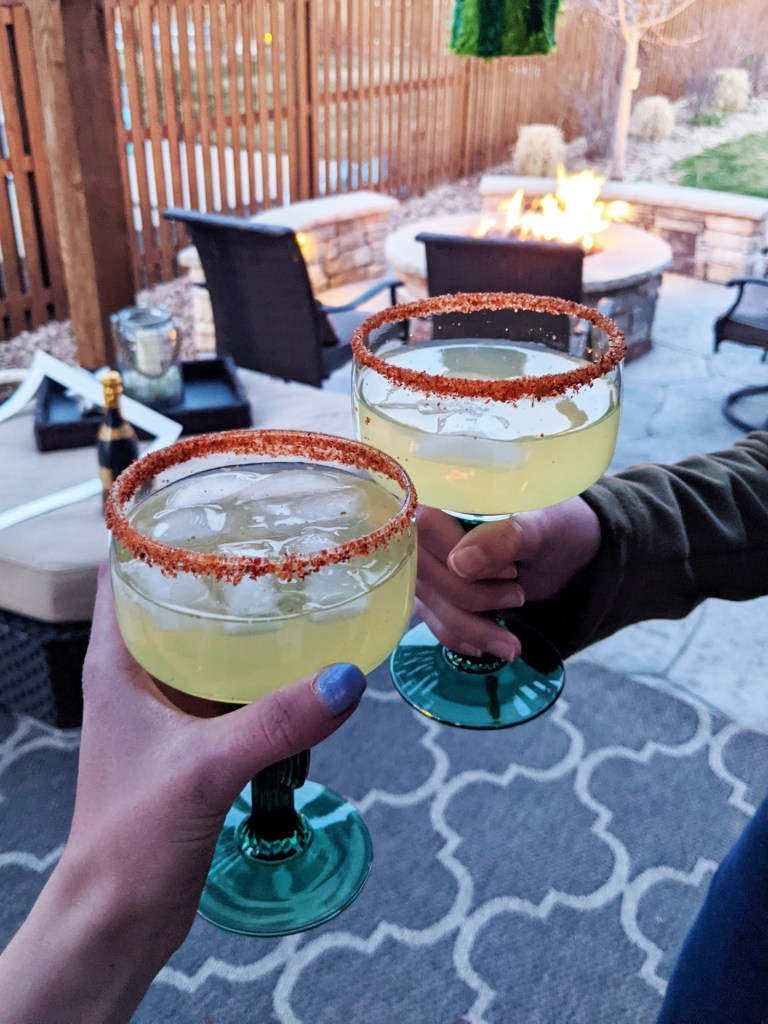 For the tequila bar, I knew we should have margaritas with chips, salsa, and guacamole, and my aunt had this really delicious spicy salt that we put on the rims of our glasses. The glasses, which have the cutest cactus stems (you can buy here), were my gift to her. I made her unwrap her present first thing so that we could pour our drinks! The colorful decorations on the wall and hanging from the chandelier are from this set on Amazon, which I highly recommend. The pack was such a great value for all the fun, vibrant decorations it comes with, and I know I’ll get lots of use out of them in the future (I already used them for my mom’s birthday, too). 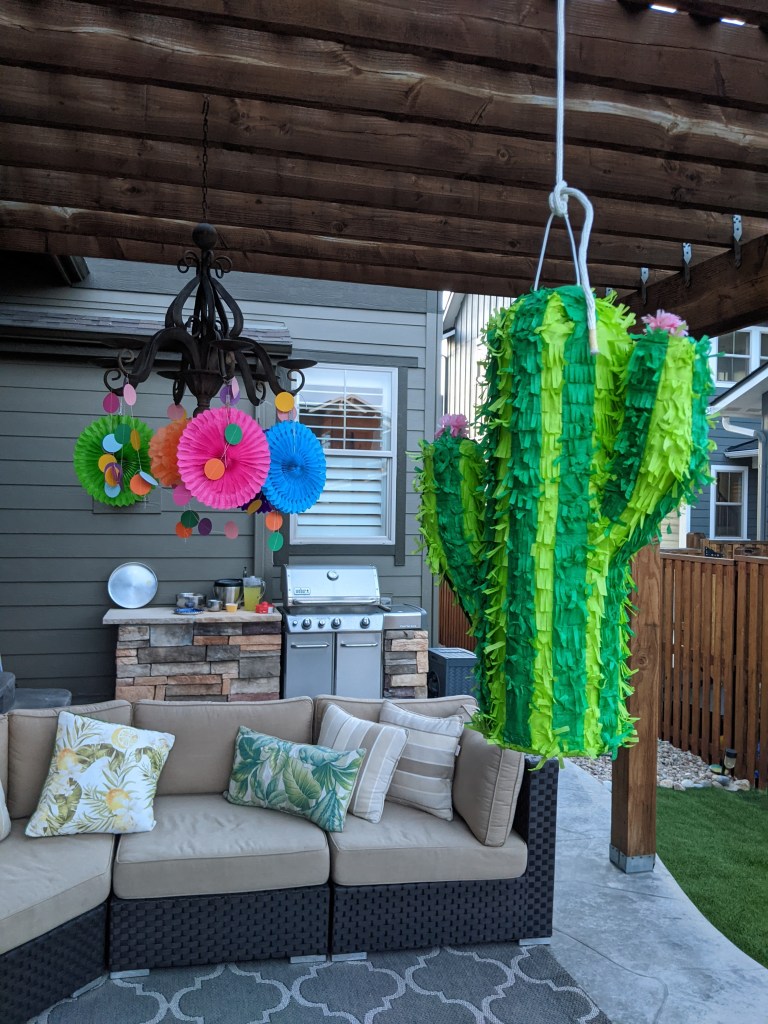 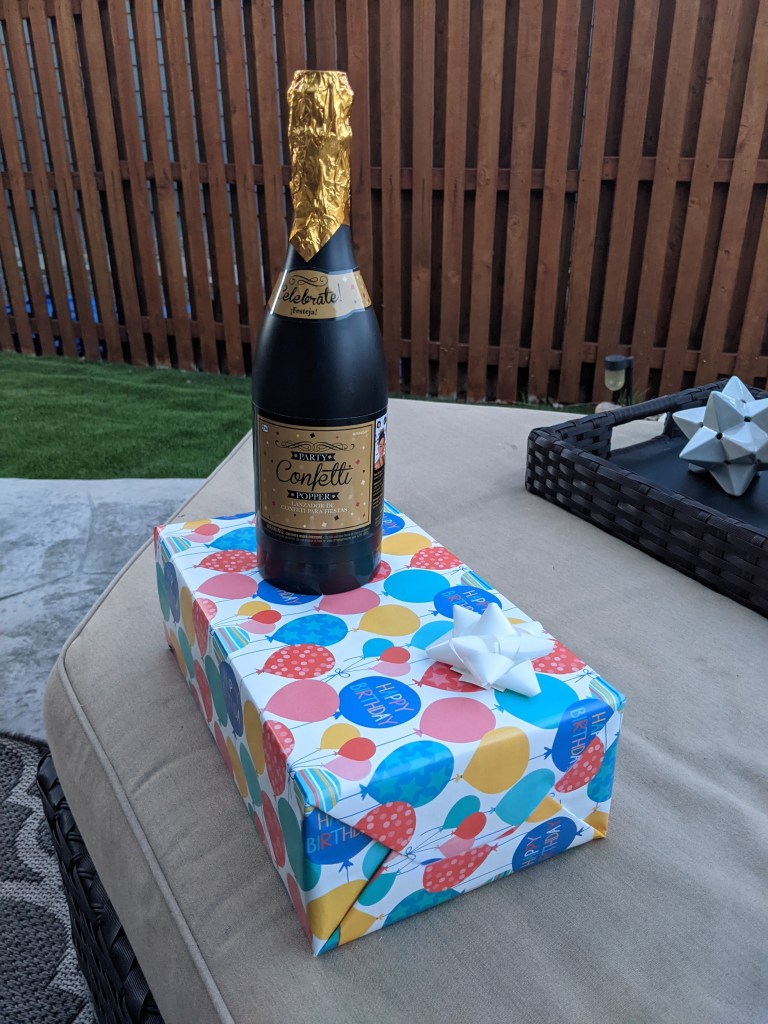 There were two activities for this bar, including this champagne confetti popper and this cactus piñata. Both were so much fun! I filled the piñata with candy, wine corks (for the 21st birthday theme), and tiny ping pong balls… which come into play later in the night. For music, I made a playlist on the free version of Spotify with all my favorite Spanish songs! 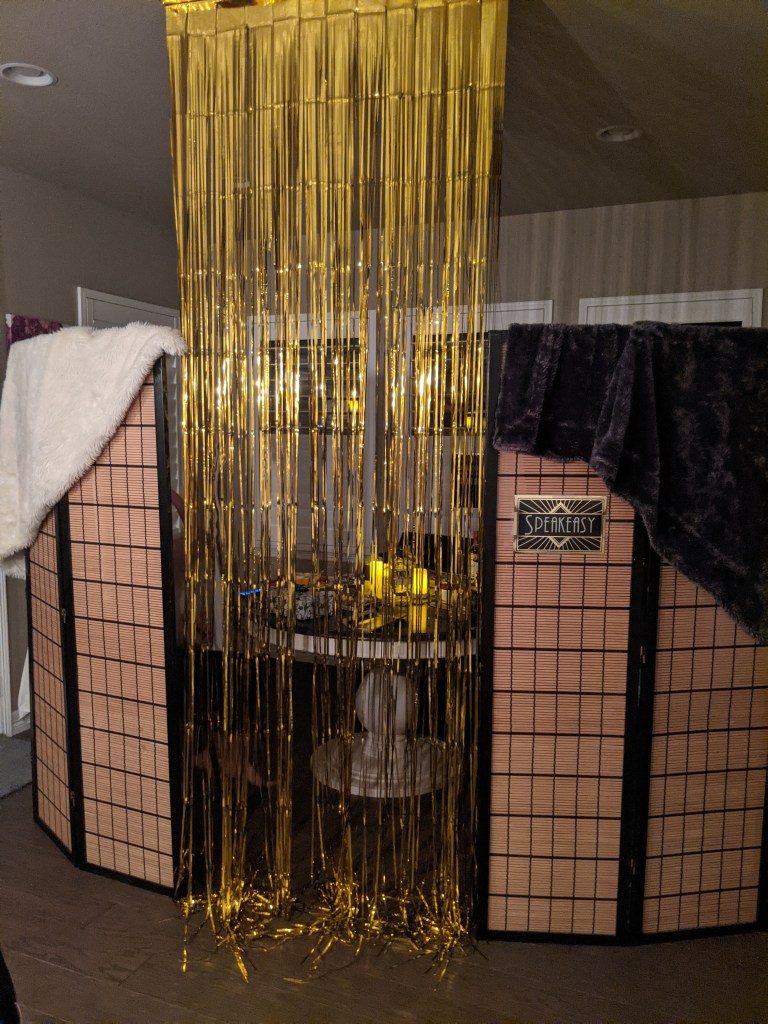 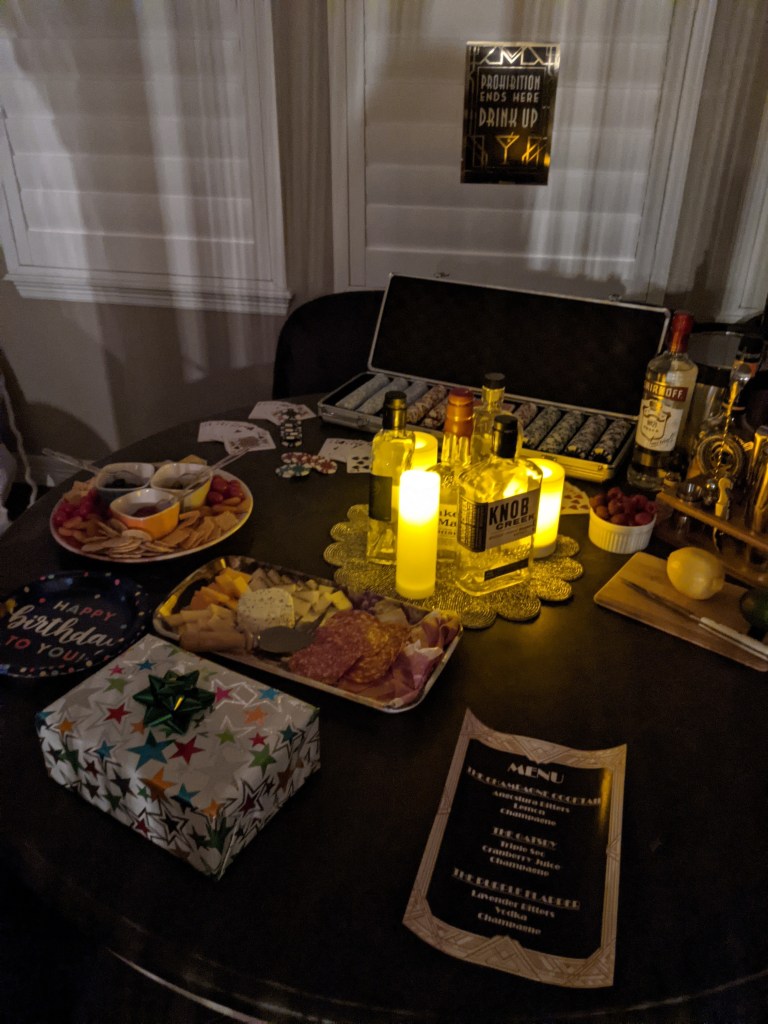 The next bar was the speakeasy, which my aunt and I set up around the kitchen table. She had these amazing trifold room dividers and luxe blankets that made for the perfect speakeasy walls! I also purchased this gold tinsel photo backdrop, which my aunt thought to use as the door into the bar (the backdrop comes with a sticky layer at the top, which made it super easy to attach to the ceiling). When it was time to move to this bar, I asked my friend for the password before going in, which of course was the answer to the riddle I gave her in the invitation! For other decorations, I purchased these fun 20s themed signs and hung them on the walls. My boyfriend’s friend also had a bunch of old whiskey bottles, which I used as the centerpiece and throughout the rest of the speakeasy, and I brought my mixology kit for added decoration. We also put out decks of cards and poker chips for the gambling vibes, with a nice candle-lit ambiance.

The present at this bar was two champagne flutes, which she again opened first thing so that we could get started on our drinks. I made a menu for this bar and gave my friend three cocktail options (all of which were champagne-based, so that I didn’t have to buy too much alcohol): 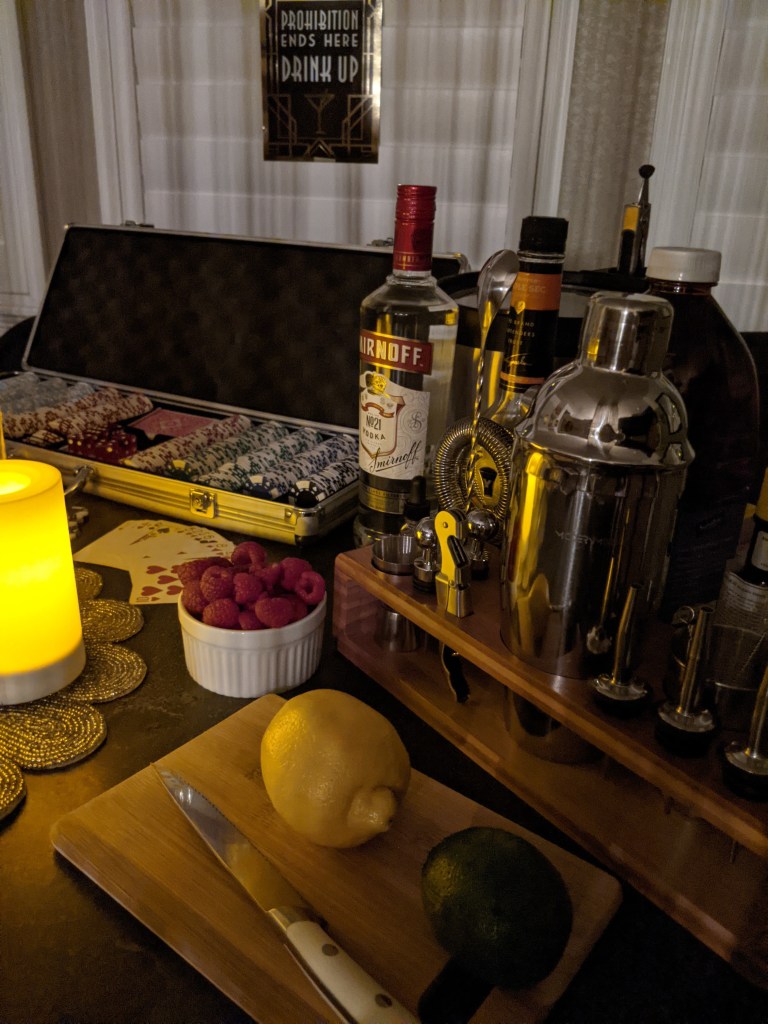 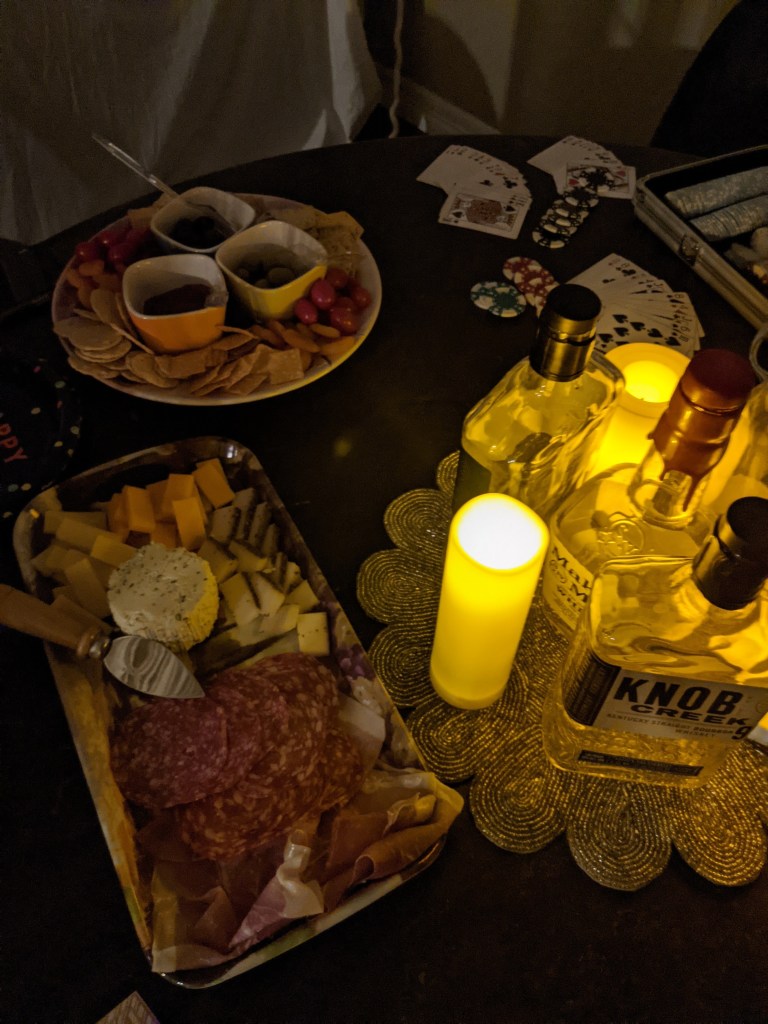 Our snack was this fabulous charcuterie board. I got three kinds of crackers, goat cheese, one of those fancy cheese packs with three different kinds, prosciutto, a pack of three kinds of salami, two kinds of olives, dried apricots, and bacon jelly. It was all so delicious! 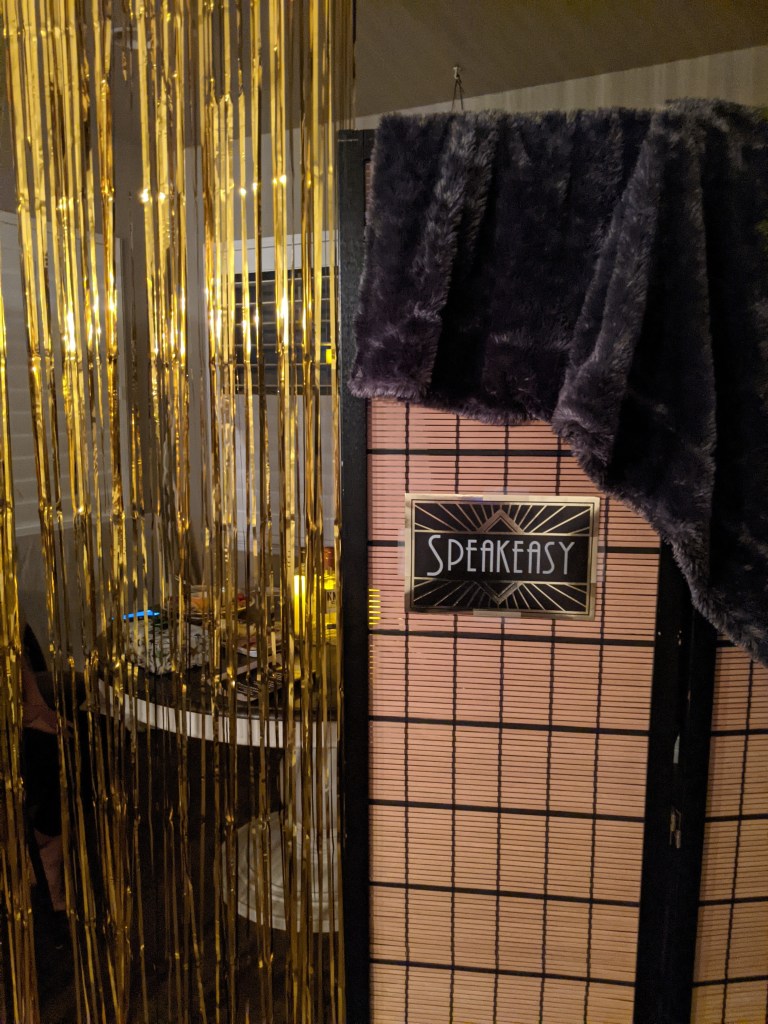 For the activities, we had cards to play and this ‘toss the pig’ game, which is one of my favorites. I also ordered these super cute 20s themed photobooth accessories, so we took lots of pics in front of the gold backdrop! As far as music goes, the playlist was a mix of old-timey songs that were actually popular in the 1920s and the soundtrack from the newest Great Gatsby movie, just to have something more modern in the mix. 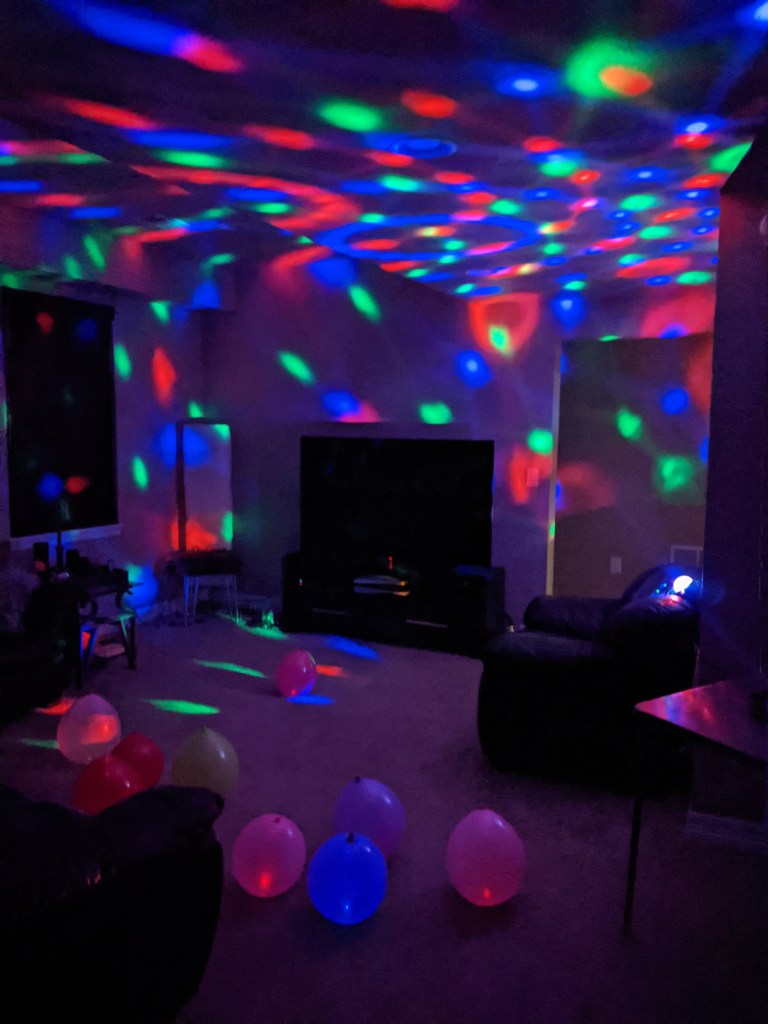 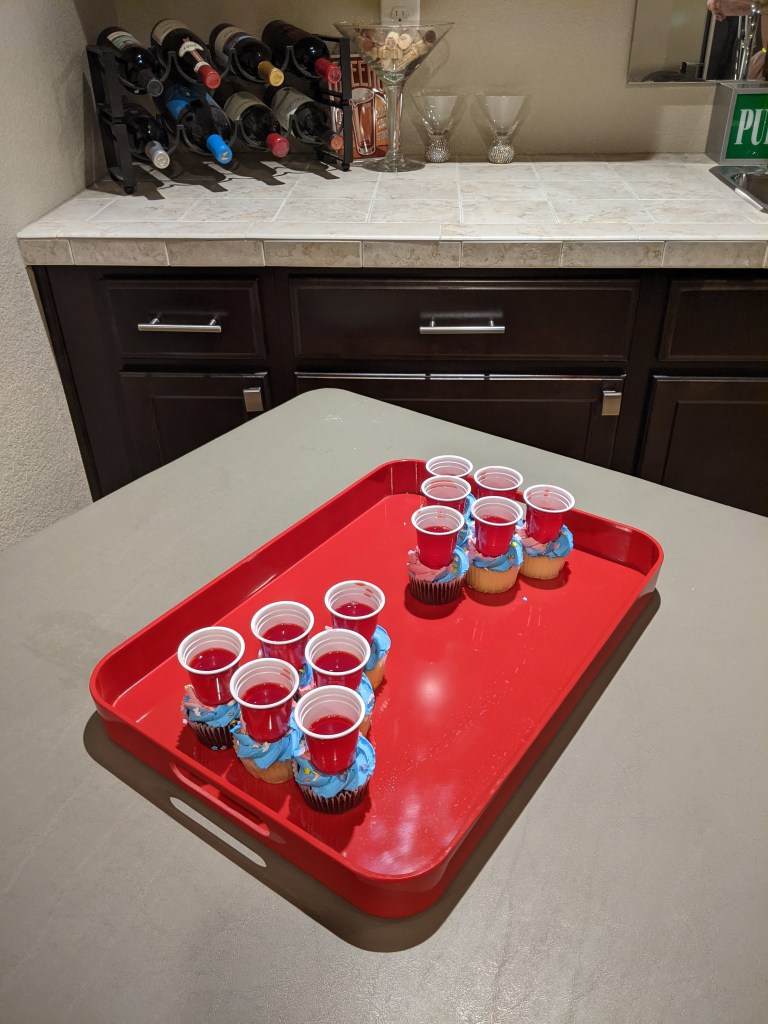 The last bar was the club! This bar was in the basement of my aunt’s house, so before we went downstairs, I acted like the bouncer and made my friend show me her VIP pass to get in. We left all of the lights off except for this tiny light disco ball I ordered from Amazon, which turned out to be the perfect amount of flashy lights. I also picked up this awesome glowstick pack, which included light up balloons, tons of glowsticks and connectors, glasses frames, and even headbands. One of our favorite parts was getting decked out in all these glow accessories! In addition to dancing and singing to the music (the playlist contained a carefully curated selection of dance songs), the activity for this club was jello shot beer pong. I saw this idea on Pinterest, so I bought some cupcakes and found these adorable tiny red solo cups at the regular grocery store, which came with tiny ping pong balls (yes, the same balls I had put in the piñata at the first bar). I made the jello shots using this recipe and stuck each red solo cup into the frosting of the cupcakes. If you decide to make this recipe, I recommend using a cup of vodka instead of half a cup—these shots didn’t have any effect. 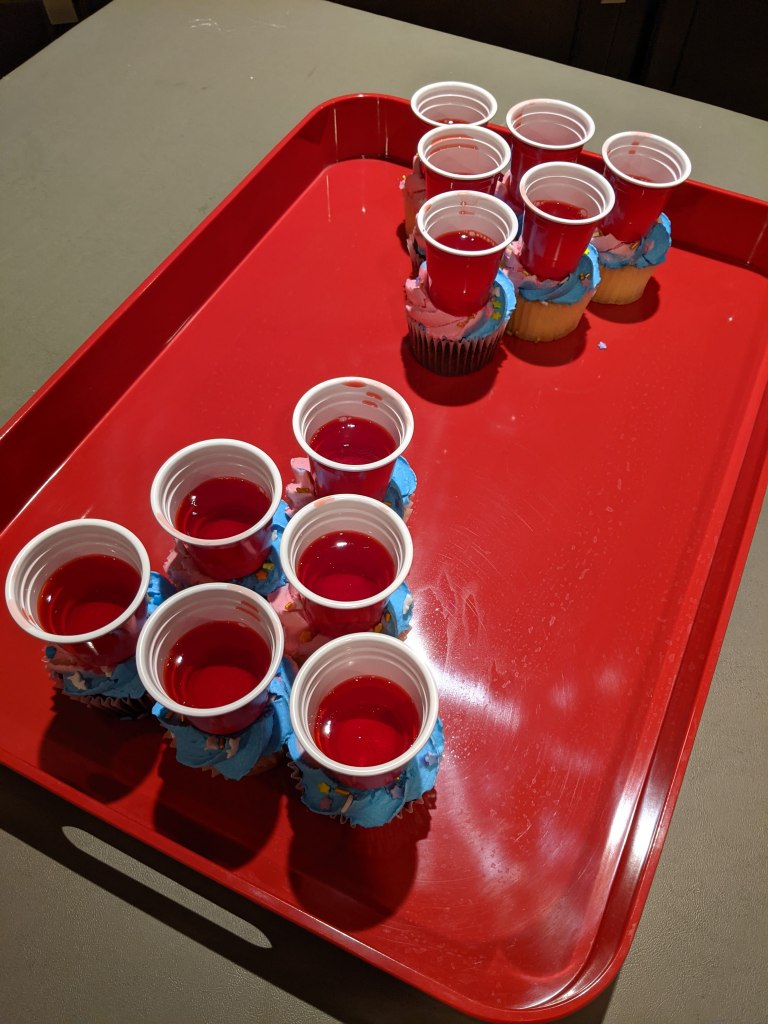 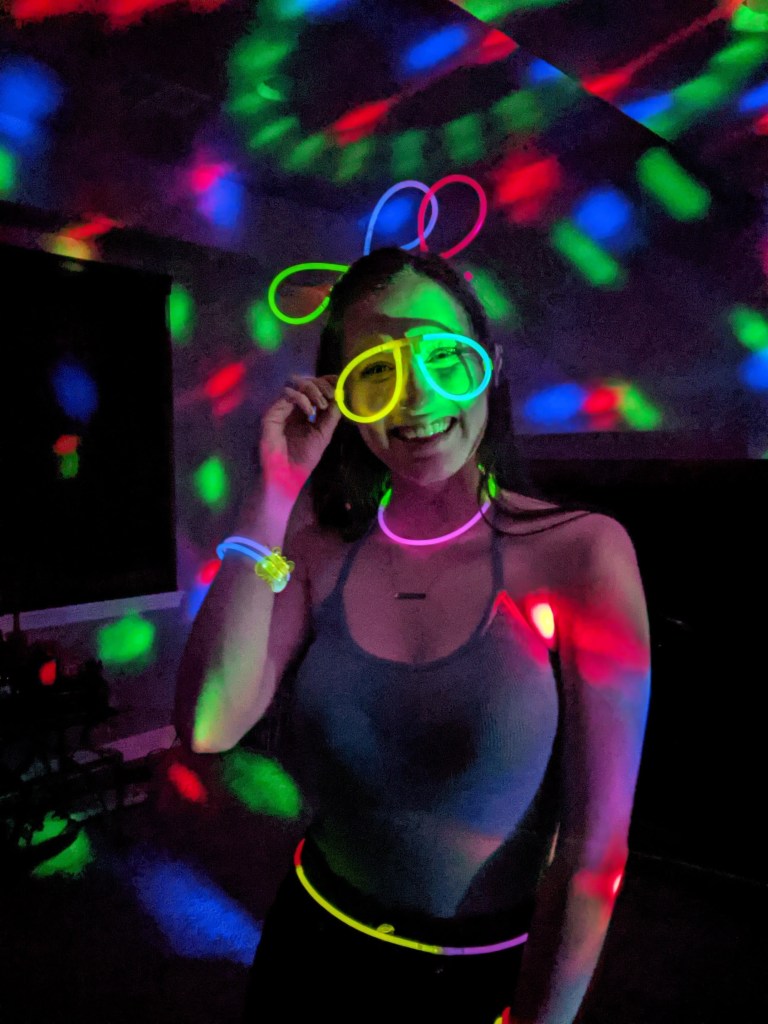 And that concludes the bar hopping! We arrived at my aunt’s house around 7:20 pm and went to bed at 12:30 am, so we spent a little more than an hour and a half at each bar (and paced ourselves very well, I might add, with lots of water in between drinks—no hangovers here!). I was so nervous I would forget something important or that the night would be lame, but the party turned out to be such a blast. Sure, it wasn’t as fun as real bar hopping would have been, but it was the second best (and safest) thing to celebrate her birthday.

Have you ever thrown any extravagant parties? Did you have to celebrate your 21st b-day in lockdown? I can’t wait to plan even more events in the future, and someday my kids are going to be spoiled as heck with the best birthday parties ever!

I hope you enjoyed this blog post and that you’re having a great start to your week.

Been wearing these funky slip-on sneakers from @ui

Last week's outfits and one of my favorite songs l

Casual weekend vibes in my new shoes from @uinfoot