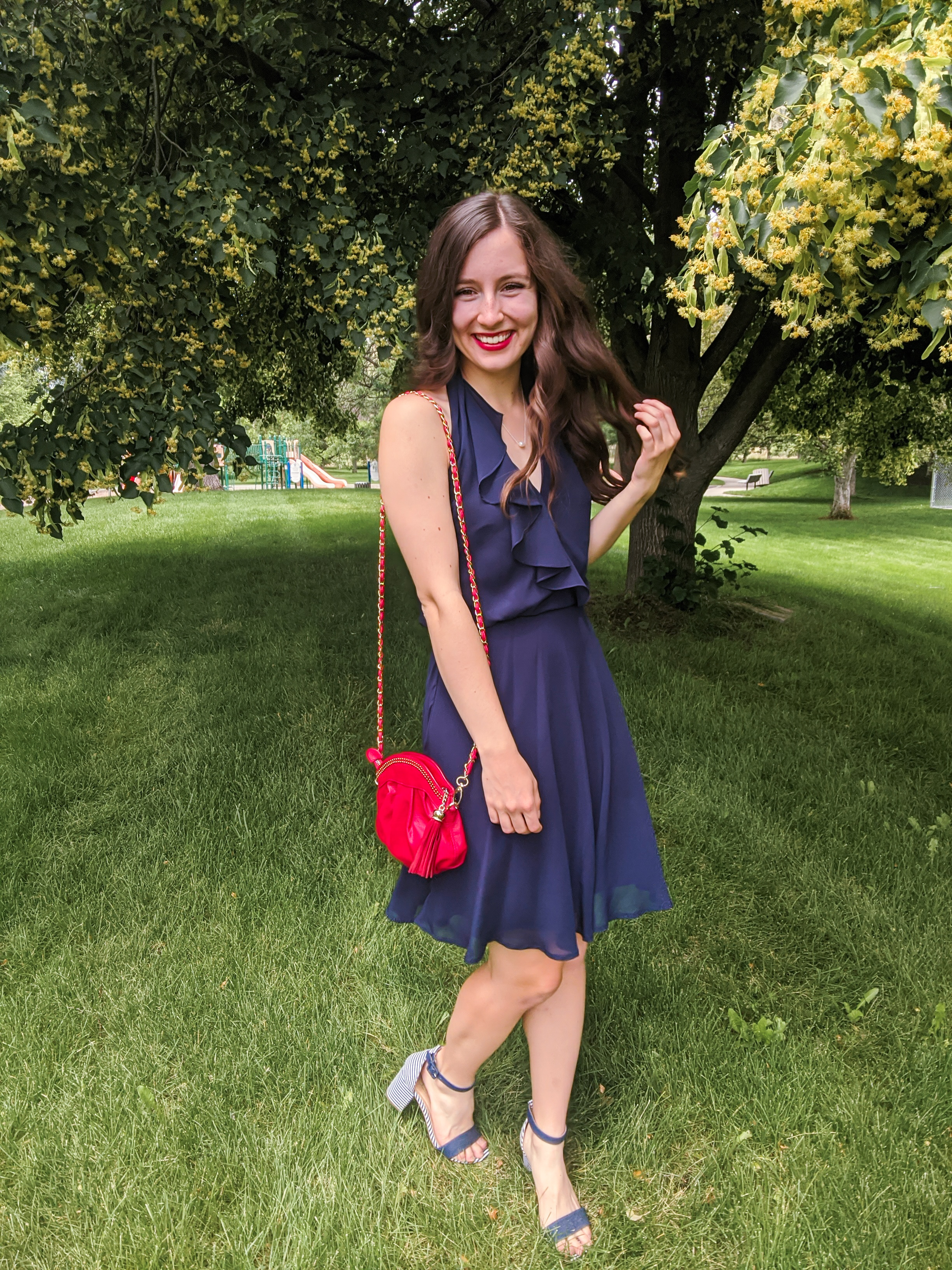 I’m so excited to write today’s blog post! Not only was my May Monthly Round-Up really well-received, but it was also SO much fun to write, which is why I’ve been looking forward to June’s post for basically the whole month. I can’t believe how fast June flew by and how busy I was (despite doing absolutely nothing?? Hm…), but I’m excited to get cracking on an even bigger to-do list for July. 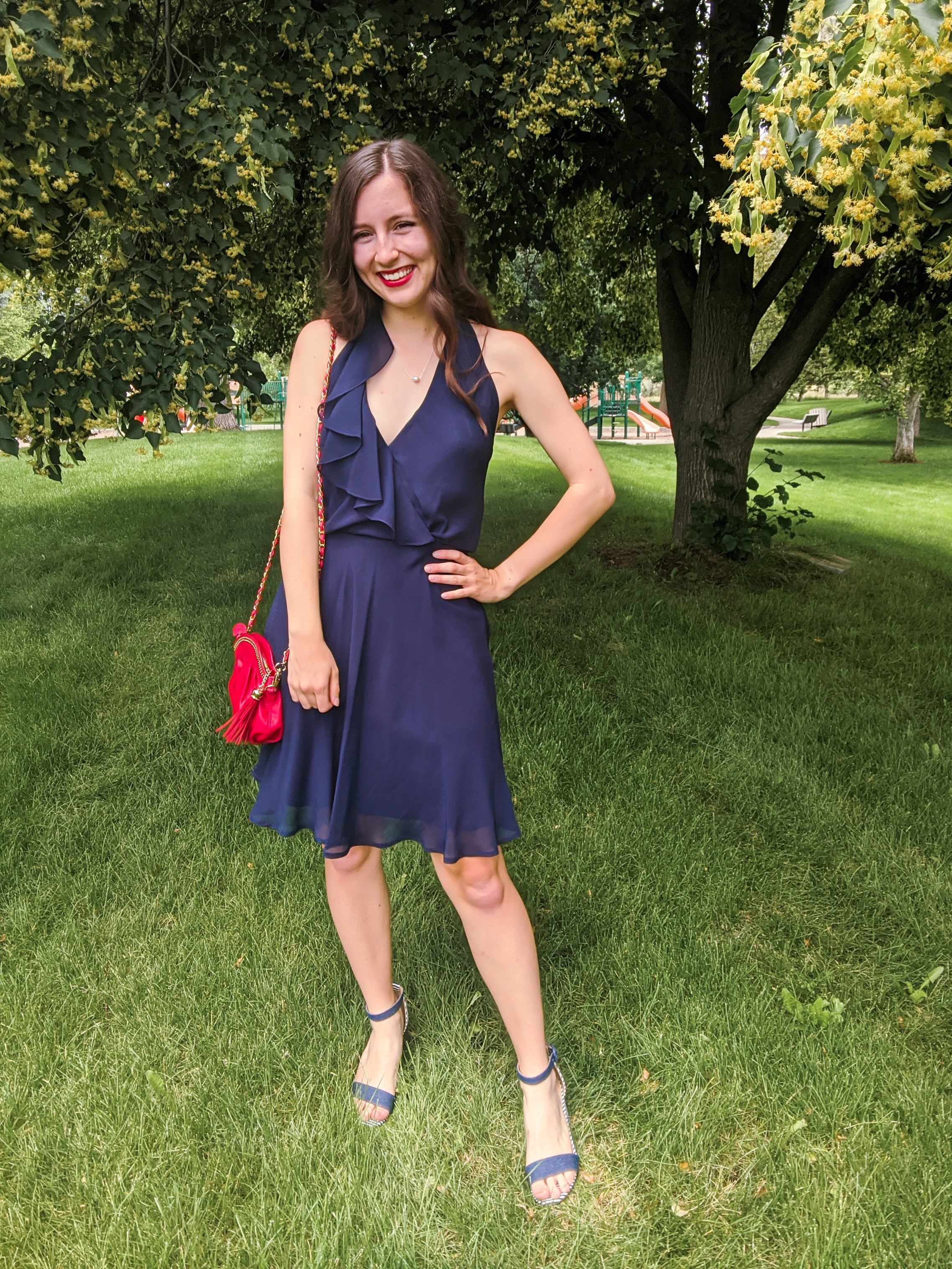 My favorite outfit from the month of June was actually the one from Monday’s blog post. I haven’t worn that fiery orange skirt in forever, but I love it now just as much as when I first got it! (Way back in 2012 or so.) Also, I’m just obsessed with those black studded heels. Have you noticed how much I’ve been wearing them lately?

In terms of my outfits “off camera”, I admittedly usually just wear workout clothes in the summer, as I often start my day with some form of exercise and have absolutely no social life/places to be that require real clothing. But when I do put on my real clothes, I’ve been living in my favorite Loft shorts and a tee, as it’s the perfect summer “uniform” to lounge in the heat.

As I’ve mentioned several times on Instagram now, I’m currently giving my closet a makeover, so I spent yesterday trying on all my formal and prom dresses! Because who DOESN’T need an impromptu fashion show in her bedroom?! I’m telling you guys, it was some of the most fun I’ve had this (bizarre) summer.

Besides a few gifts for friends and family, I didn’t purchase anything this month! Can you believe it? But since I’m cleaning out my closet, I’ve been making a list of items I need to purchase and replace. I can already tell July’s gonna be a rough month on the wallet, ha! 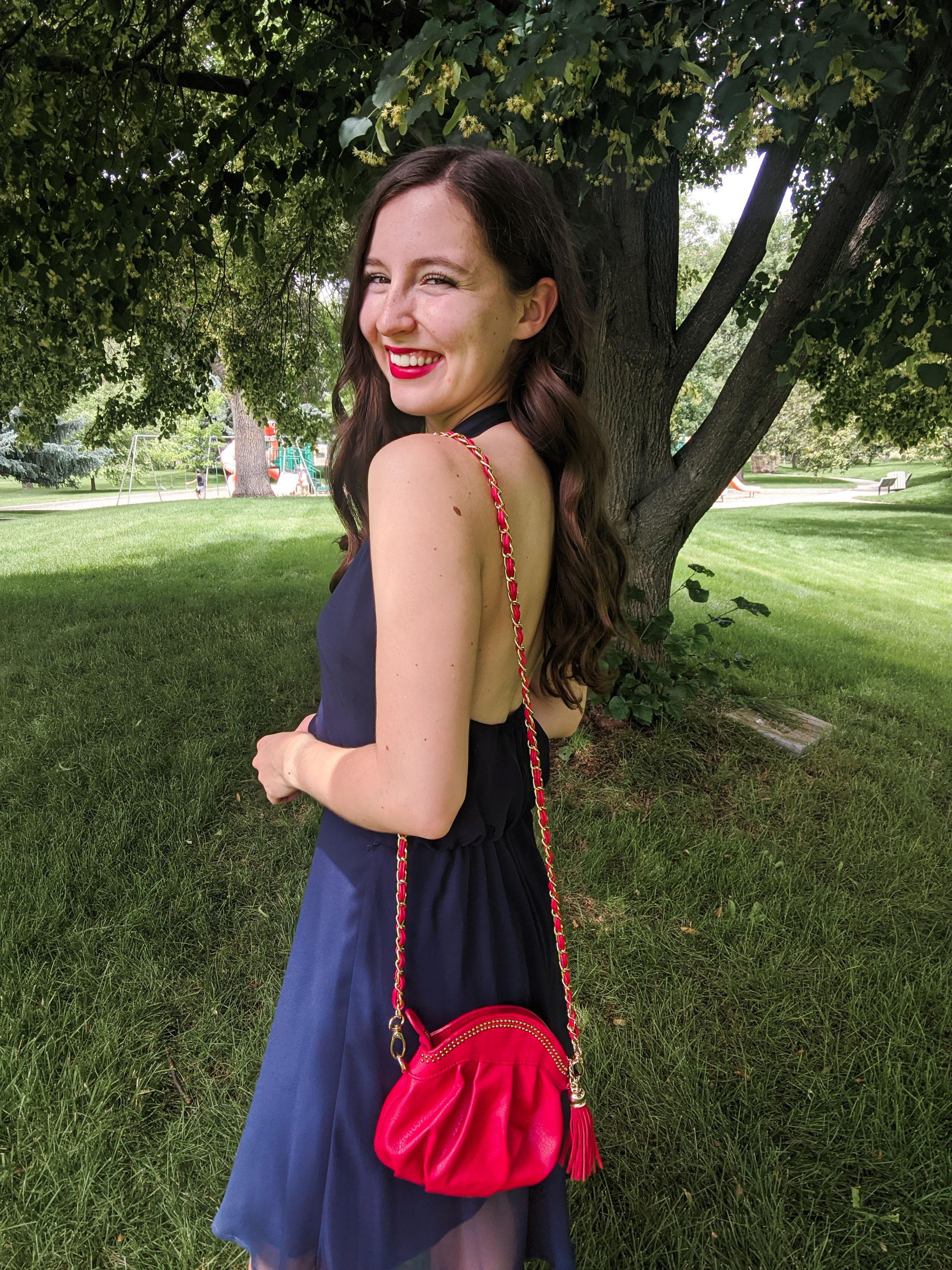 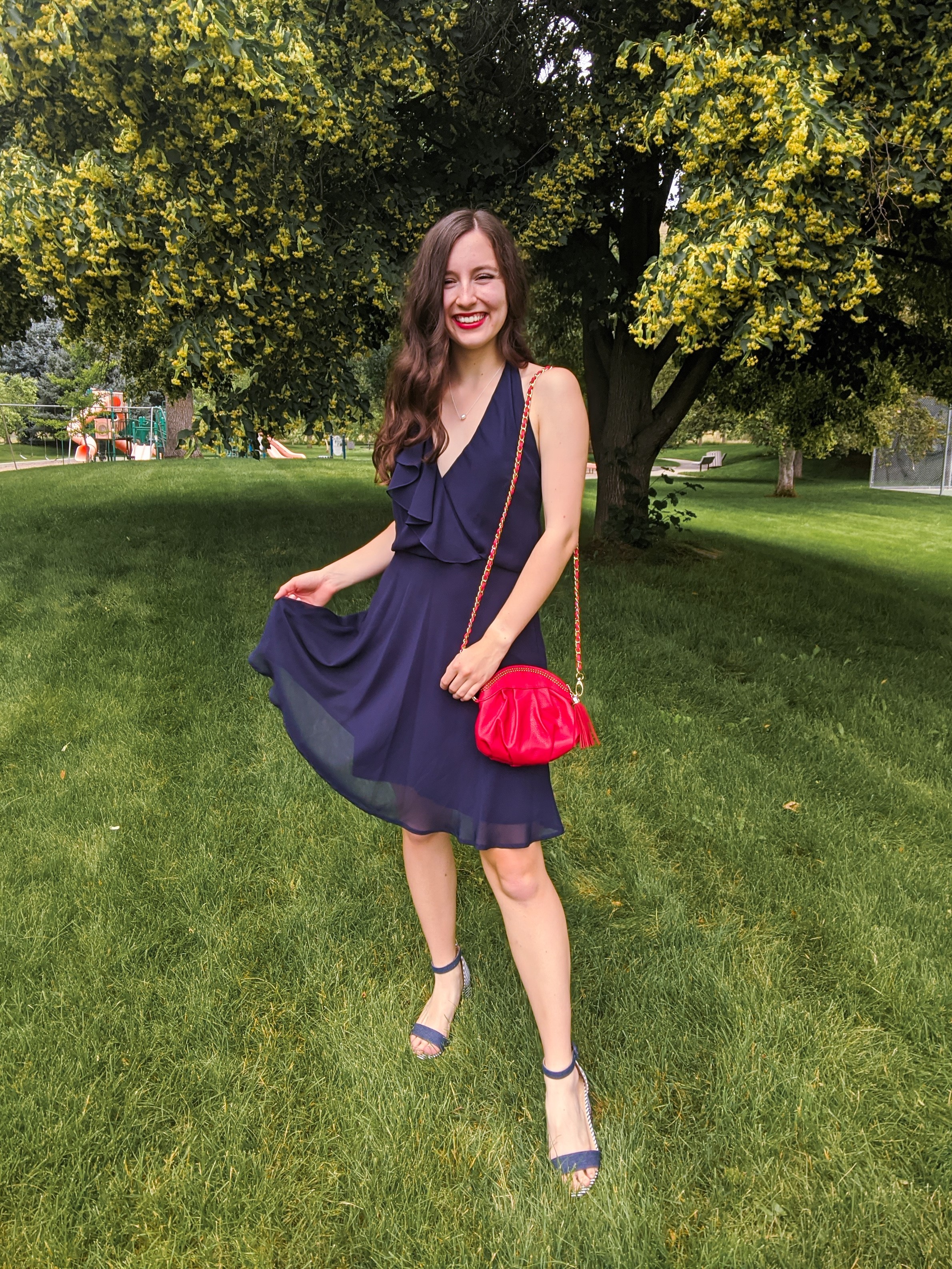 Okay, random thought, but do I kind of look like Chicken Little in the picture above? My face? Just sayin’.

I’ve recently discovered a new way to curl my hair and I am obsessed. Okay, that’s probably a little dramatic considering I’ve only done it twice so far, but this new method does have great potential for me. As I’m sure you already know, I am absolutely not a hair guru in any capacity. I once filmed three hair tutorials for the blog and they’re super cringy! All this to say, I’m not very skilled at using my curling iron, nor am I very fast at doing my hair. I only have one ceramic curling iron and I honestly have no idea how big the barrel is. What I do know is that the iron makes big Hollywood glam curls, and while I love that look, it’s not really in style at the moment—loose, beachy, effortless waves are. So I decided to get a little creative and ended up using my curling iron as if it was a wand, wrapping strands of hair around the entire tool and leaving my ends out for that ‘loose wave’ look. While I still have a lot of practicing to do, I love how natural the end result looks (featured in these pics)! Now my only problem is adding volume… My hair is so heavy that it always ends up looking really flat on the top of my head. Ugh. 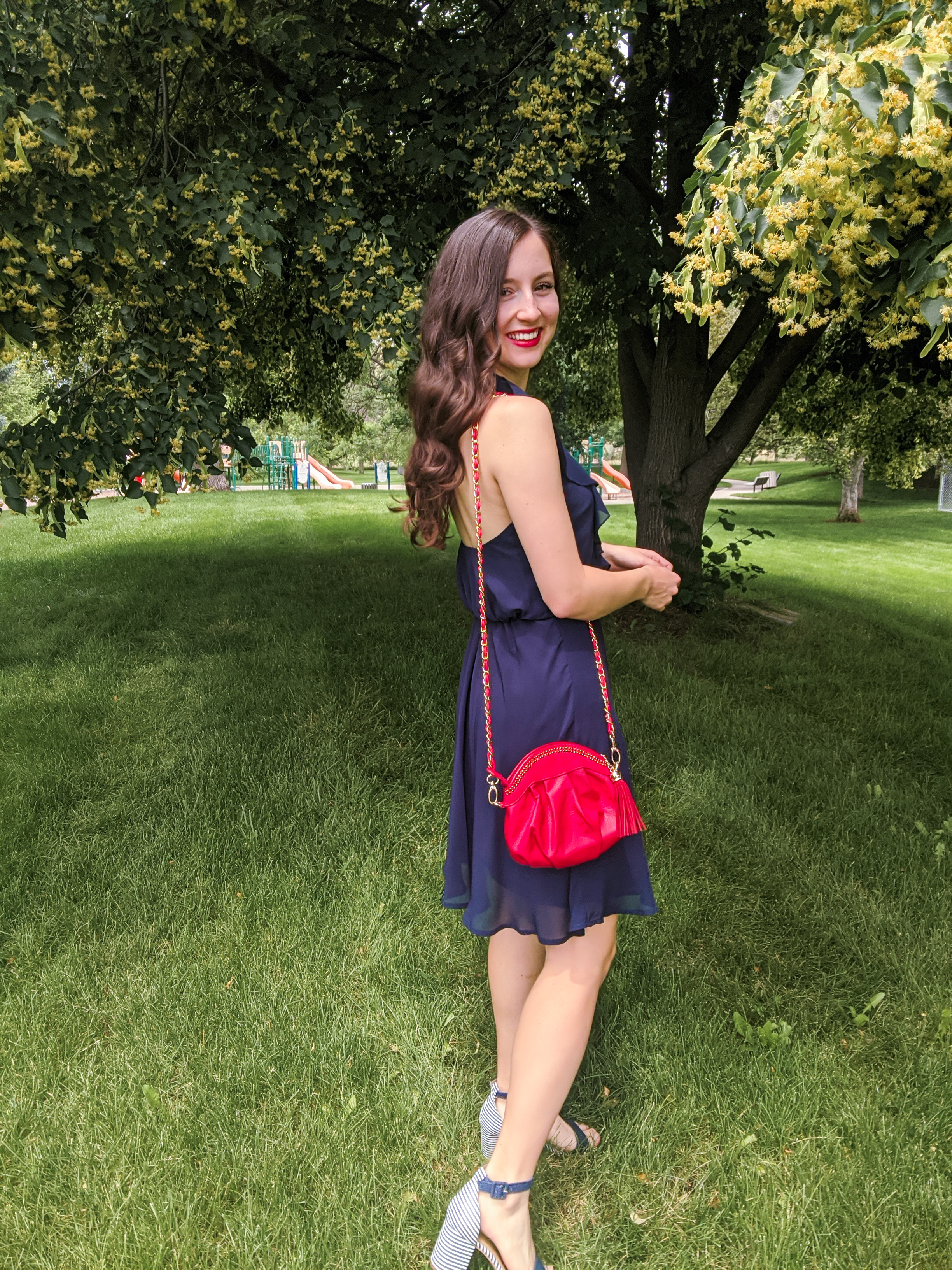 As I promised in last month’s post, I finally got back into reading this month, and it felt SO good! I read the novel You Are Not Alone by Greer Hendricks and Sarah Pekkanen and really loved it. It’s about how this woman, Shay, gets wrapped up with a mysterious group of women led by two exotic and fabulous sisters. But of course, it has a dark turn. Check it out here!

For TV, my dad and I finally finished watching “Homeland” on Hulu—well, we finished watching as much as we could handle (to the end of season four). The show was really great at the beginning, but it quickly gets old. Either way, it’s a great watch if you’re interested in the CIA and international affairs!

For movies, my dad and I watched both the documentary 13th and the movie If Beale Street Could Talk. While I had actually already learned a lot of the information in 13th during my Criminology classes, it was still so informative (and horrifying) to see it outlined and explained in chronological order. My various Criminology classes touched on several aspects of the documentary (which is about race in the era of mass incarceration), but the film really solidified everything I’ve learned and painted a very clear timeline. It also gave me an idea for the thesis I want to write! But more on that later.

We really enjoyed the cinematography and artsy-ness of If Beale Street Could Talk, even though the storyline was tragic. The acting was great as well. And, I would be lying if I said I didn’t love seeing the 70s fashion!

Other notable movies we watched were Knives Out (finally) and a 2010 film called The Way Back, which was based off a true story of four men escaping the Russian Gulag during World War II and hiking 4,000 miles to India. Could you imagine?!

What have you been watching/reading/listening to this month? Yesterday as I cleaned my closet, I listened to both discs (the full soundtrack) of the 2012 version of Les Miserables. I don’t mean to brag or anything, but I basically know every line. 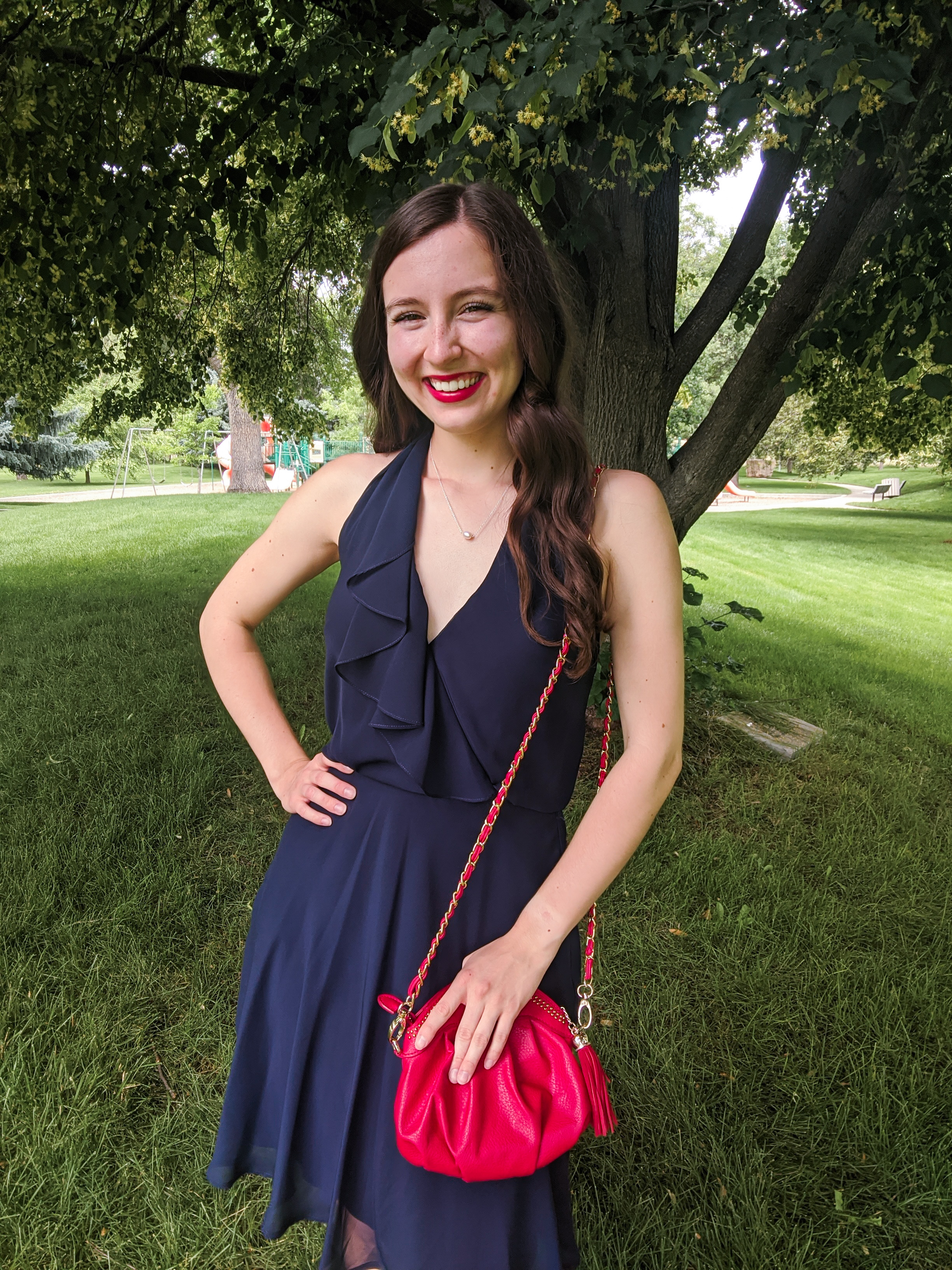 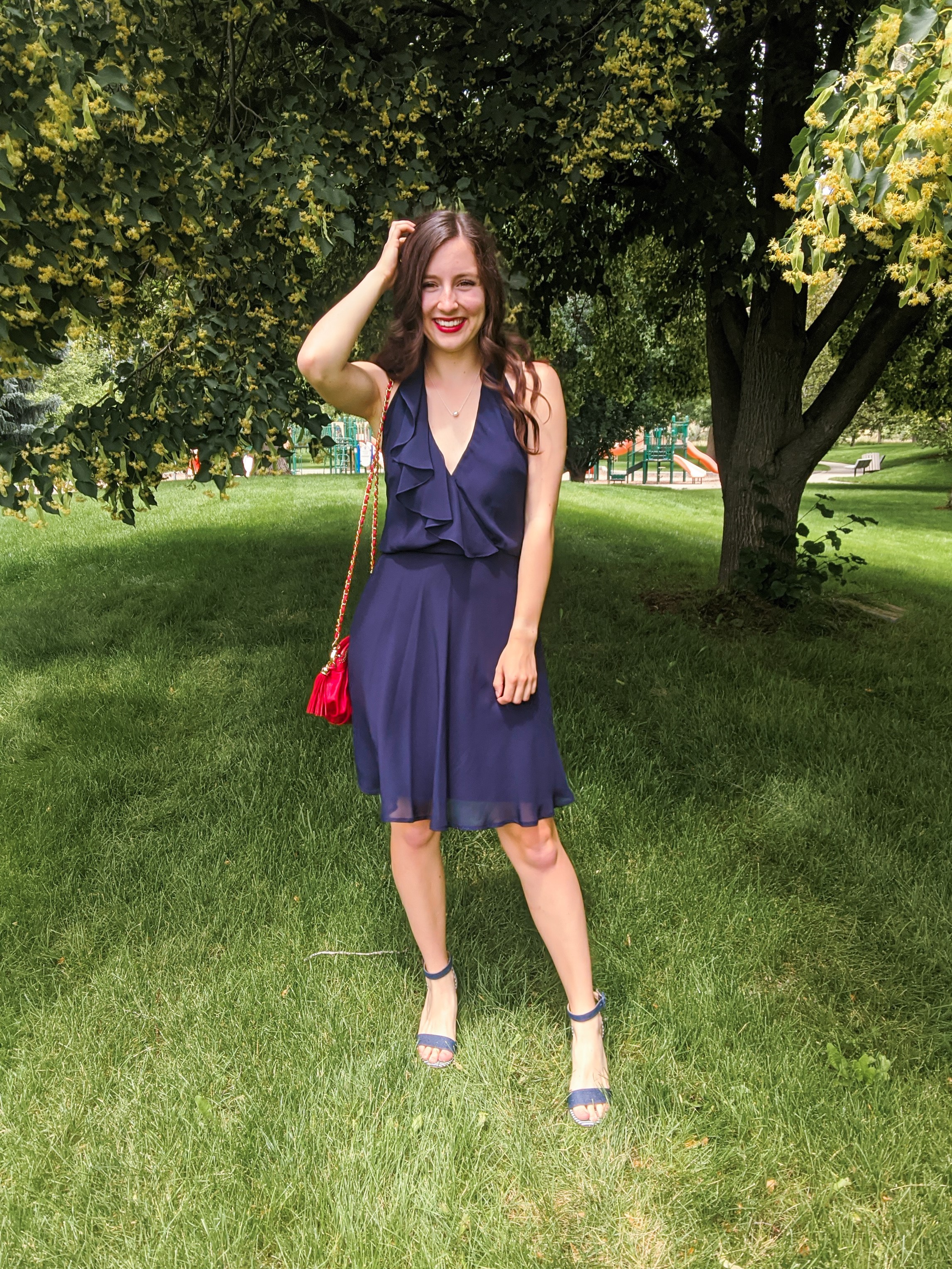 For June, I picked a favorite Eleanor Roosevelt quote of mine: “No one can make you feel inferior without your consent.” And yes, this quote is featured in Princess Diaries, for any of you die-hard fans. I chose this quote for June because I’ve found myself really struggling with other people’s opinions lately. I think life has been quiet lately—in the sense that I’m home all the time—which means the voices in my head start chattering a lot. I tried my best to embody the quote, but it takes a lot of practice to be able to brush off others’ comments and take responsibility for your own emotions. I’m coming for ya’, July!

My two goals for the month of June were to A) grow my Instagram following from 794 followers to 830 followers, and B) grow my blog following from 386 subscribers to 400. Technically, I did not reach either of these goals… But I don’t feel like a failure at all! I’m so proud of myself for what I accomplished in a month. I grew my Instagram account to 825 followers, and I grew my blog to 398 subscribers (only two shy!). When June began, I had no idea if the goals I set were attainable. But now, considering how close I got to reaching both goals (and while having a week with no internet), I know these goals are absolutely realistic! I’m so excited for what I was able to accomplish in a month—which is probably more growth than I’ve had this entire year so far—and to take that momentum into July.

With that said, I plan to make engagement on other blogs my top priority for July once again. My July goals are to A) grow my Instagram following from 825 to 850, and B) grow my blog following from 398 to 415. To do so, I plan on engaging a lot more on Instagram and continuing to pin everyday on Pinterest. I also have big plans for photography this month—I think I want to go back to shooting with a DSLR camera and actually teach myself how to use it! We’ll see how that goes though…

This Month in 2019: Red, White, and Blue // 5 Non-Cliché Things I Learned by First Year of College // My Obsession with Cost per Wear and Excel Spreadsheets

This Month in 2018: Let the Diva Die // Dressing for Fashion Capitals of the World (As a Tourist) // Why Designer Items Aren’t Worth It // That was Nothing Like High School Musical

This Month in 2017: Smoking Hot… Or Not? Ways to Stay Cool this Summer // What Goes Around Comes Around: My Top Ten Countdown

(“This Month in…” is Styled by McKenz’s idea) 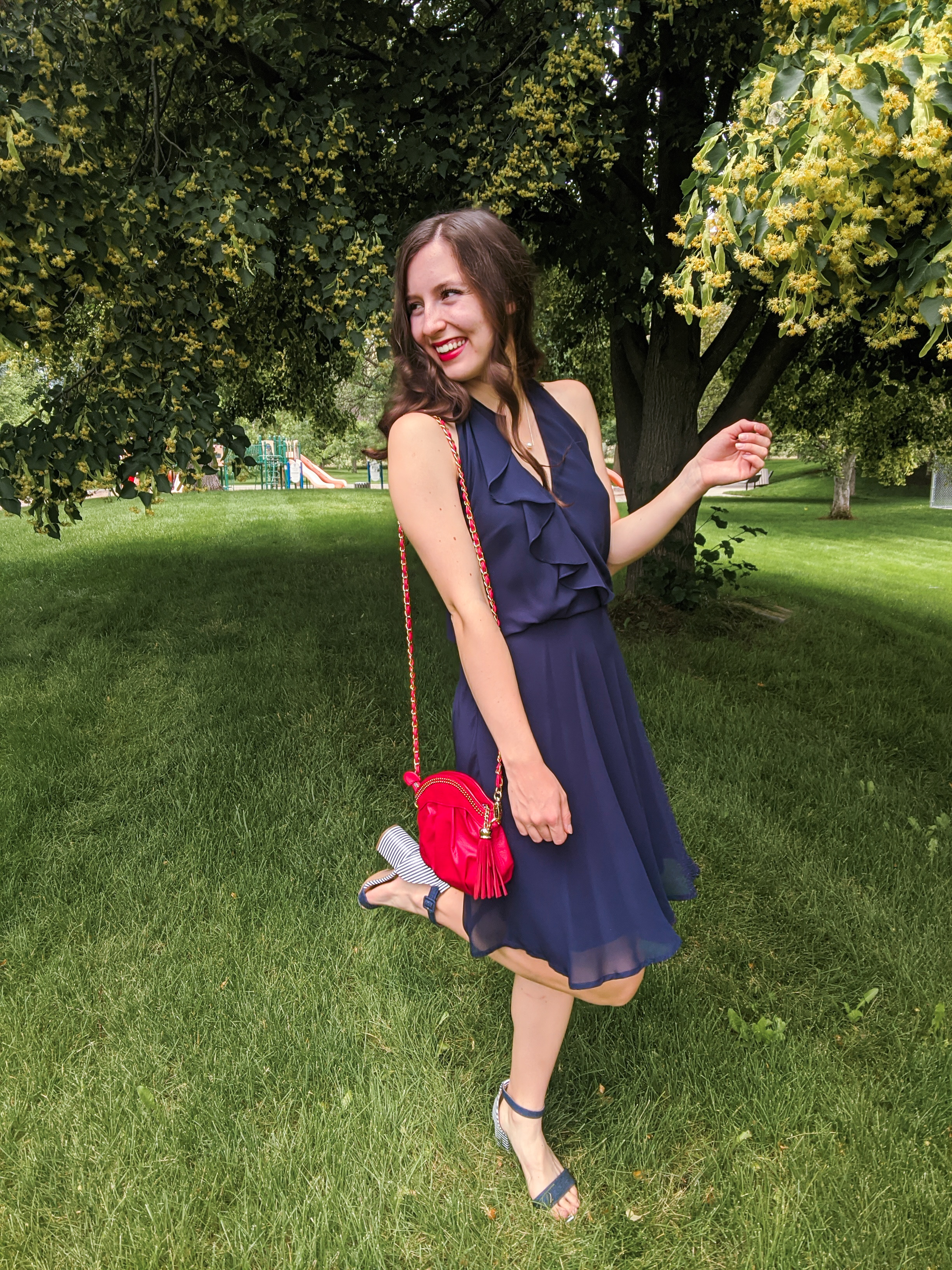 And that’s a wrap! Would you believe it if I told you I’m writing this post at three in the morning? I’ve felt so energized lately and haven’t been able to fall asleep because my brain just won’t. turn. off. And you know what else won’t turn off? My stomach ‘cause I can hear her growling.

Anyway, you may recall this pretty navy dress from my Jessica Day inspired outfit and from my thrift shopping haul—this dress was only $1! I paired it with these super cute striped heels, which y’all went crazy for on Instagram the other week, and I topped the look off with red accessories—a bold lip and bright purse. What plans, if any, do you have for the Fourth of July? My mom and I are planning on tie-dying tank tops to wear for the day! Regardless of your plans, I hope you’re staying safe and healthy. And as always, thanks so much for stopping by today!