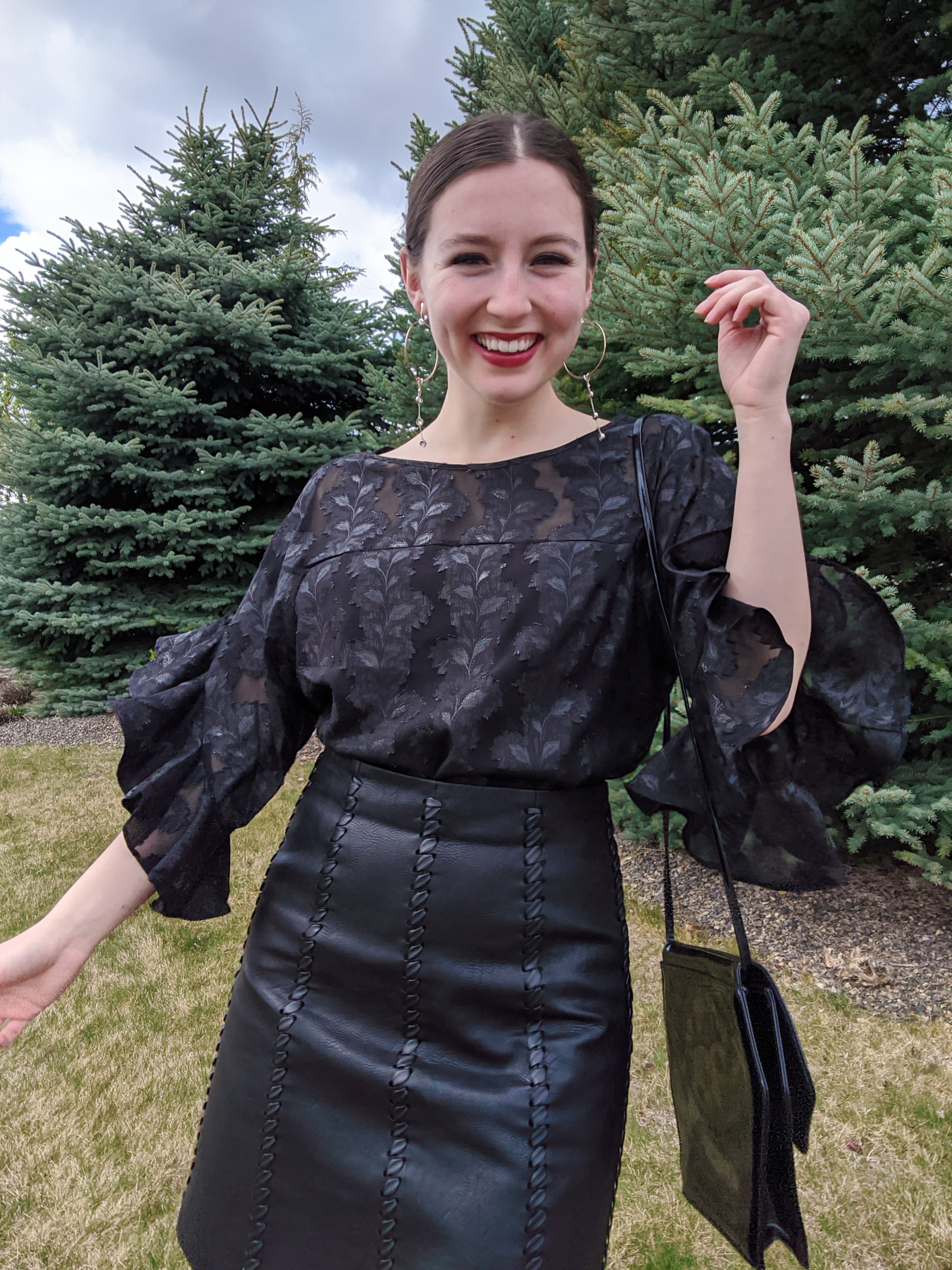 Hello hello! Today’s blog post is going up much later than usual because, in short, I procrastinated, and the weatherman failed me. But really, when was the last time I actually prescheduled a post to go live at 6 am anyway? If you’re a follower who remembers those days, then you’ve been supporting me from the beginning—thank you! Now onto the real stuff, the outfit. Today is the third installment of my Binge Worthy Fashion series, where I pick a show with great fashion, talk about it a bit, and recreate the character’s style. Today I’m featuring Jane Sloan from Freeform’s show “The Bold Type”, one of my favorite series! 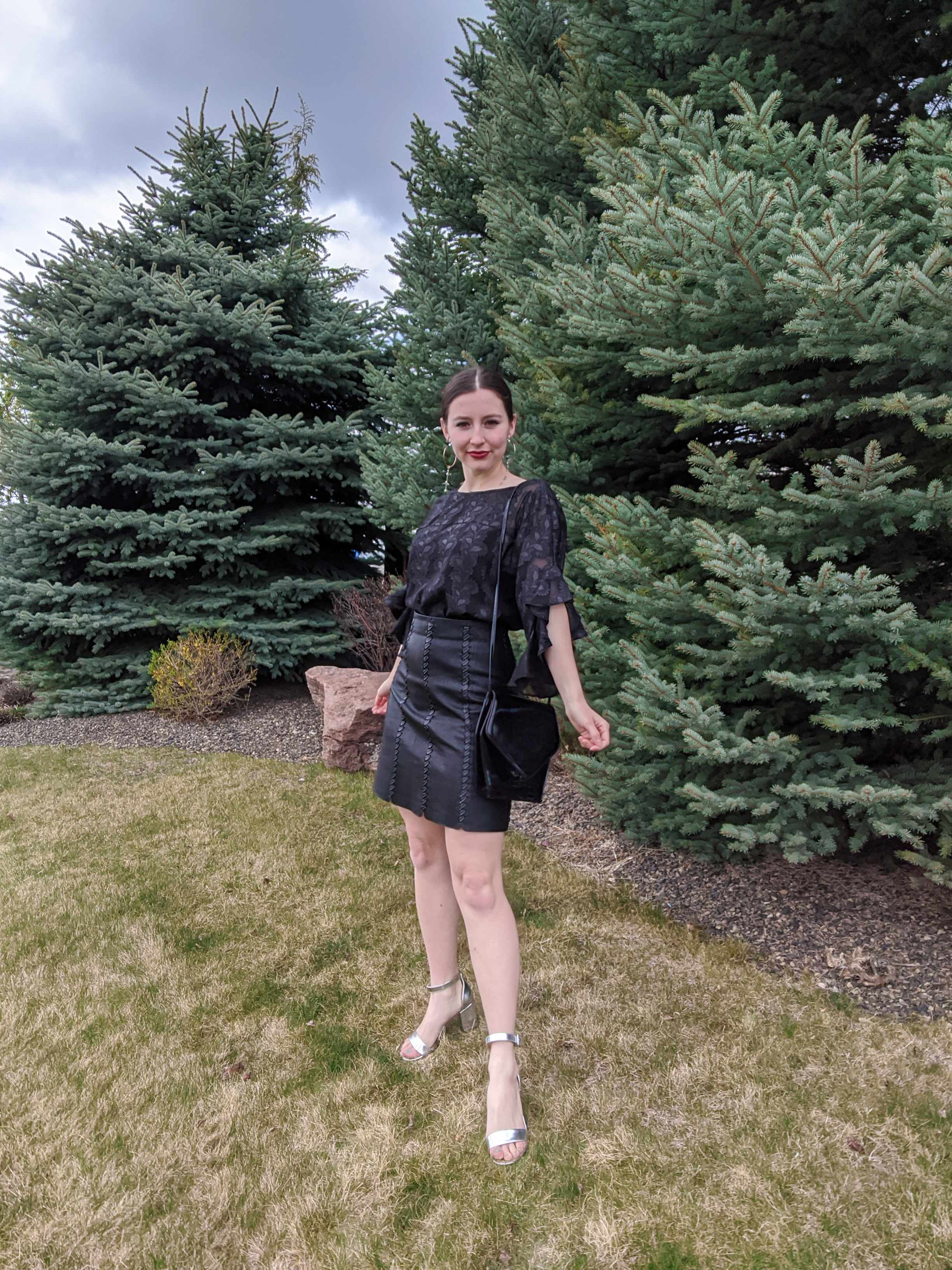 “The Bold Type” is about three best friends who work for a women’s magazine, called Scarlet, in New York City. The show first aired in 2017 on the Freeform channel (used to be the ABC Family channel, which is ironic considering none of the shows were family-appropriate), and the final episode of the fourth season just aired at the end of March. There are more seasons to come! And you can stream the show on Hulu.

Jane Sloan, Kat Edison, and Sutton Brady all have different personalities, senses of style, and jobs at the magazine. Jane, the writer, is the one I’m portraying today! I think I identify most with her style and her endeavors as a writer, plus it helps that I look the most like her. Jane often lacks confidence and fears vulnerability, but she’s a dreamer who always manages to overcome her concerns to write amazing articles for the magazine. Kat, on the other hand, is completely fearless, so much so that it sometimes gets her into trouble. She works on the social media management team for the magazine, and I often wonder what it is she’s doing to constantly grow the magazine’s social media presence. How does she gain so many followers so fast? How does she always know what to say to spur engagement? Share your secrets, Kat; I need them. Finally, Sutton is my favorite character because she works in the fashion department! She helps style people and editorial photoshoots for the magazine. Such a dream! Her character is also sweet and a good balance between Jane’s timid-ness and Kat’s audacity. The three of them form a very close—and very bold, hence the show’s name—friend group who are always extremely supportive of each other but also willing to tell each other necessary truths. The three are always doing something crazy, and I envy the sister-like bonds they share.

This show portrays working at a women’s magazine just as glamorously as you might imagine the job would be—an amazing office space, everyone wears killer outfits each day, there are lavish parties to attend, and, my favorite part of all, there’s a fashion closet. The infamous “fashion closet” is filled with designer clothes and accessories to use during photoshoots, but it’s also where the three best friends host private meetings to gossip and plot against those who have wronged them or people they care about. The show is very political in that the characters’ and the magazine’s goal is to fight for people and women’s rights, so episodes discuss feminism and topics like LGBTQ rights, period poverty, sexual assault, etc. So while the show can be funny and a dreamy escape from quarantine life, it also has very serious and heavy topics—probably why the series is considered a drama. Along with Jacqueline, the girls’ bad-ass lady boss, the characters in the show are very inspiring, to say the least! 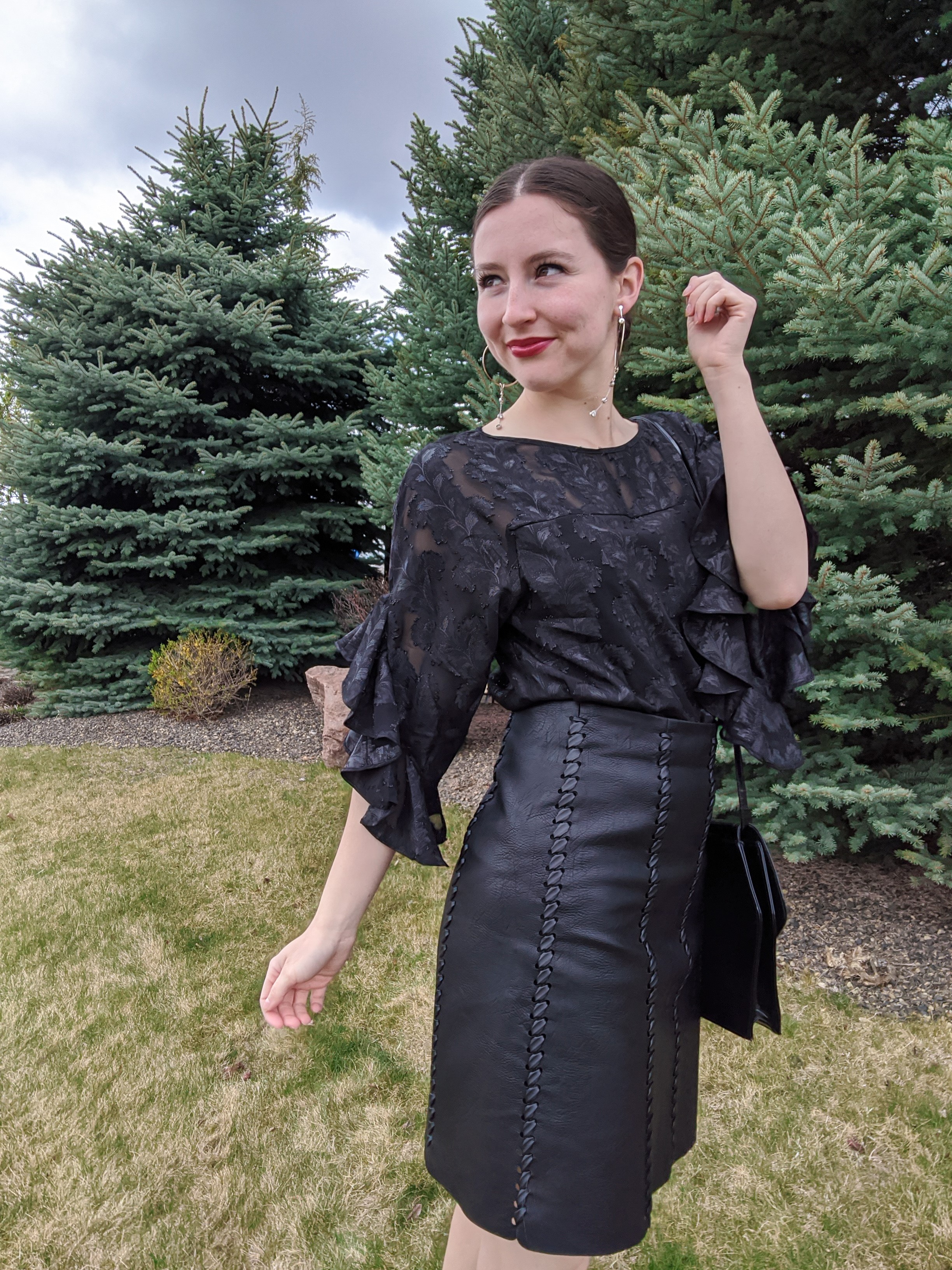 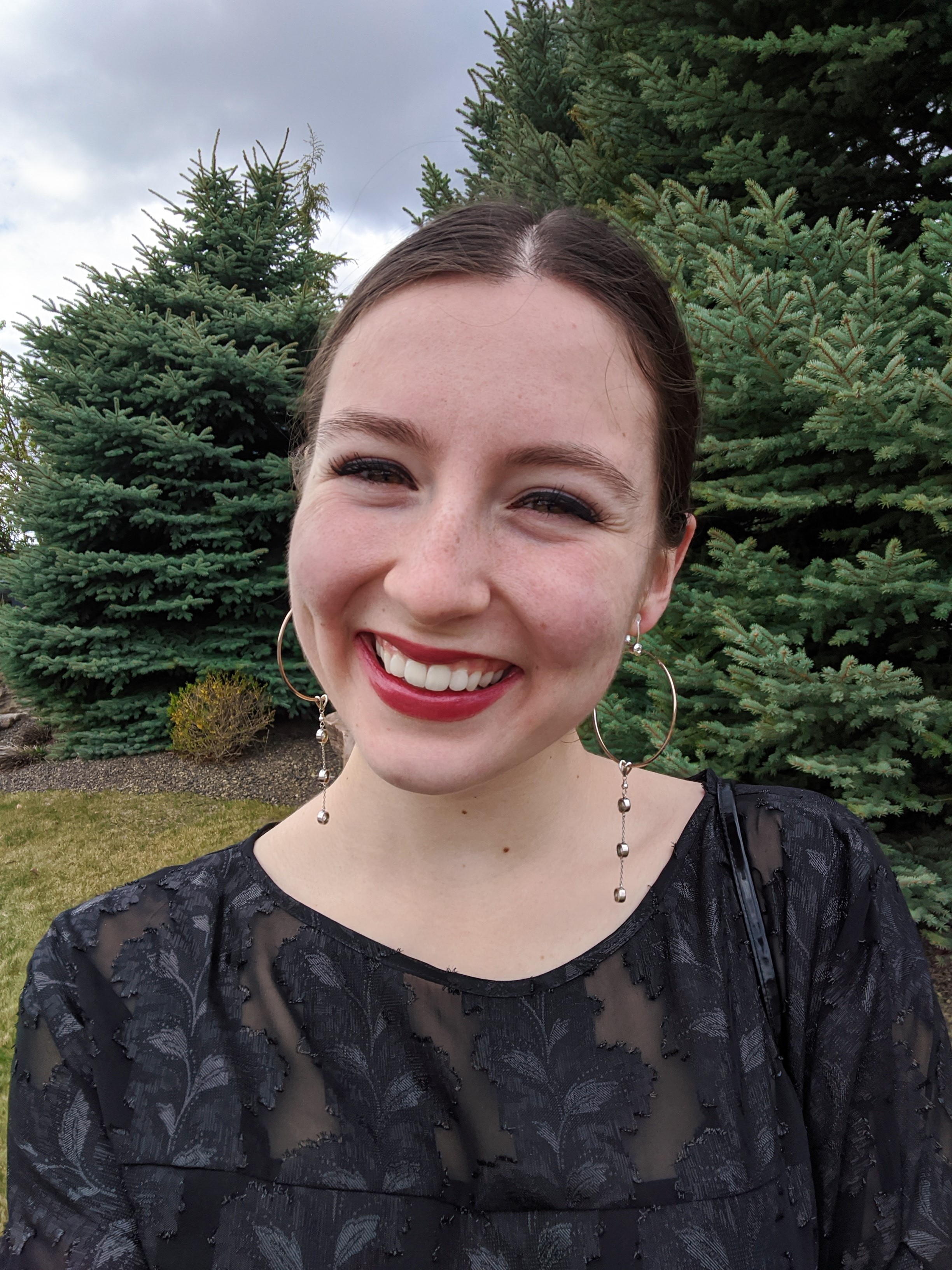 Of course, working at a women’s magazine means the girls wear the trendiest designer items (often “borrowed” from the magazine’s fashion closet) and get dressed very nicely each day. I would love to work in an environment where people dress as stylishly as the Scarlet employees do! As I already mentioned, each girl has a different style, but they all have a pretty diverse range of outfits. I had a difficult time brainstorming looks for them (originally I planned on dressing like Kat) since they’re on the cutting edge of fashion and never limit themselves to one style/silhouette of clothing. With that said, here is my best summary of each of their looks…

Jane is what I call a feminine borderline-goth. She wears a lot of black (a girl after my own heart), but she does it through feminine pieces, like miniskirts, pretty blouses, and heels. The other color she probably wears most is red (again—I’m a fan), and she’s often styling interesting tops—items with unique shapes, sleeve details, etc. She doesn’t shy away from wearing a dark lip color and also opts for sleek hairstyles a lot of the time.

Kat’s style is a blend of hip street style and effortless professional. On the one hand, she wears trendy pieces like belt bags (just a nicer name for a fanny pack) and dad sneakers with casual midi pencil skirts. But on the other hand, she pattern mixes bright, silky collared blouses with oversized boyfriend blazers and trousers. Kat’s style probably varies the most, but she’s always looking extremely cool. Oh, and she also wears a lot of crop tops to work, which is totally acceptable when you work at a women’s magazine—duh. Kat’s signature makeup is thick, winged black eyeliner and an occasional brightly colored eye shadow, and she’s always styling her gorgeous curly hair perfectly. I love when she puts it in double buns!

Unlike Jane’s style, Sutton’s signature look is more of a classic feminine, and she hardly wears black. Sutton wears a lot of lighter, softer hues to complement her fair complexion, and she’s almost always rocking some form of collared blouse—whether that be a chambray top with unique detailing or a pretty pink ruffle collared shirt. Of the three girls’ styles, Sutton’s seems the most wearable for the average gal. She keeps things more casual yet professional, and her outfits are more chicly understated.

I do have to say though, while I love looking at all of the unique and trendy clothes in this show, there are a lot of pieces and outfits that I would not wear. A lot of the items are just too crazy for my style (if I worked at a magazine then maybe I could rock them?), but nonetheless, I always love the inspiration, even if I wouldn’t wear the looks myself. 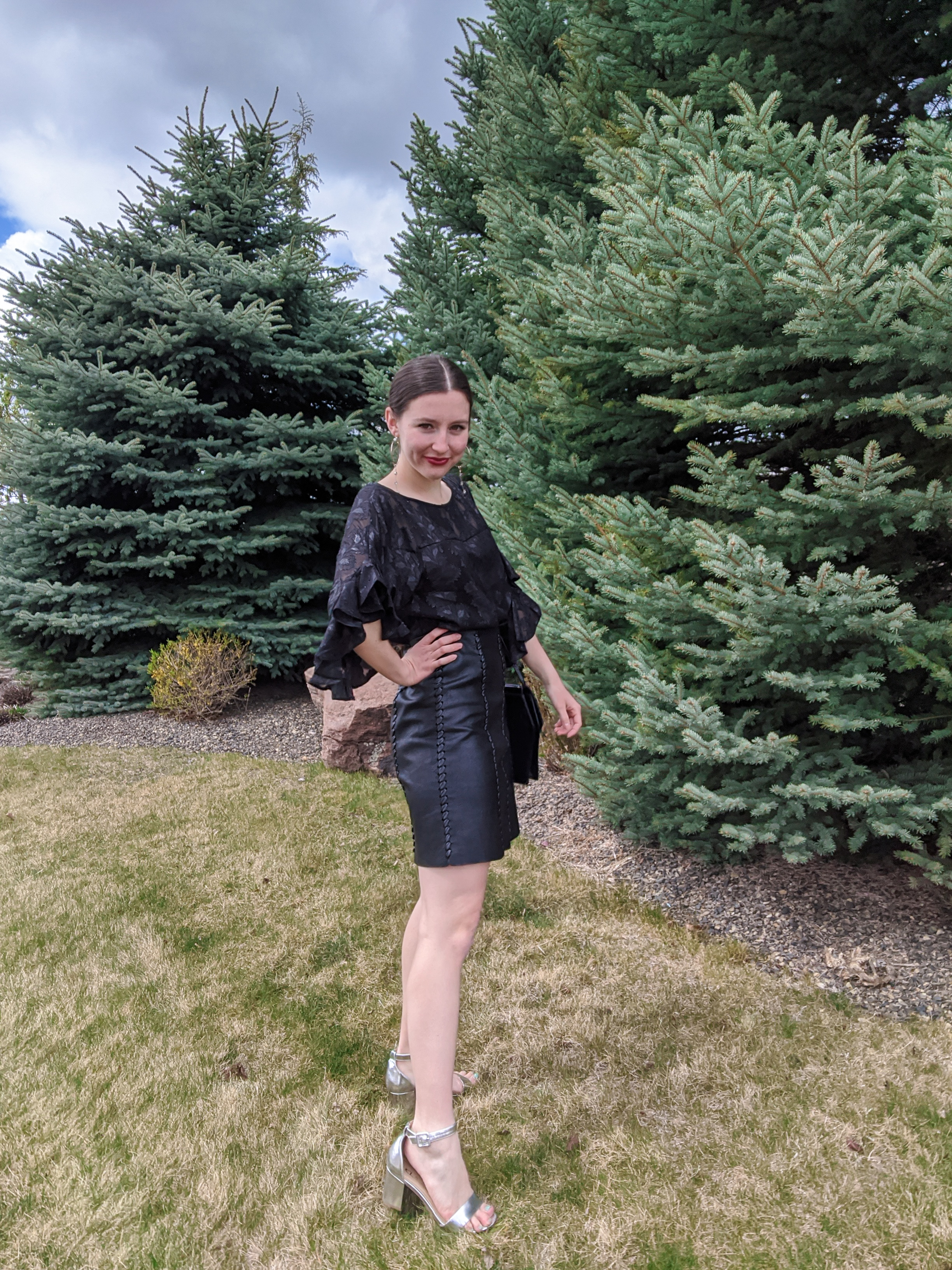 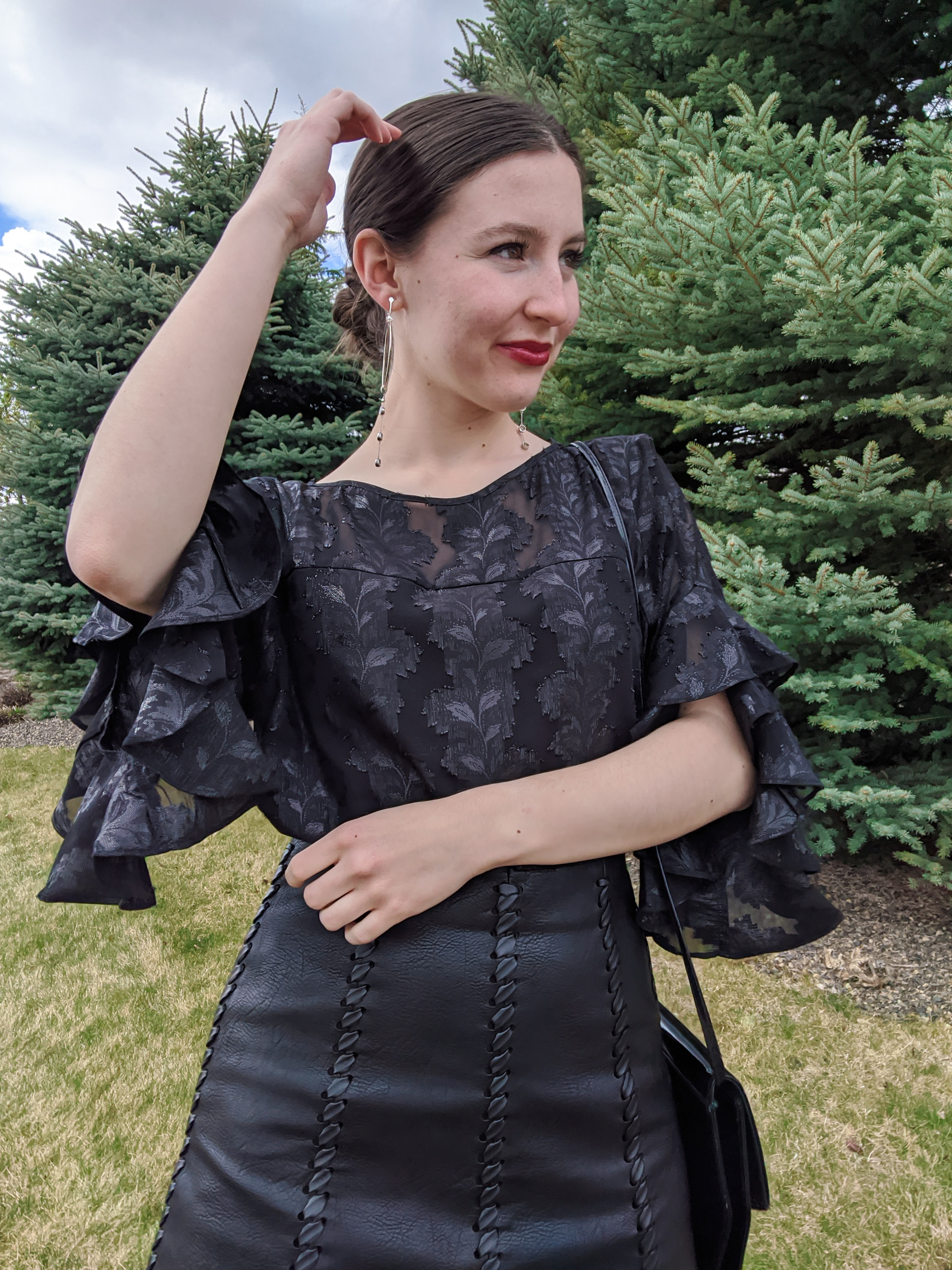 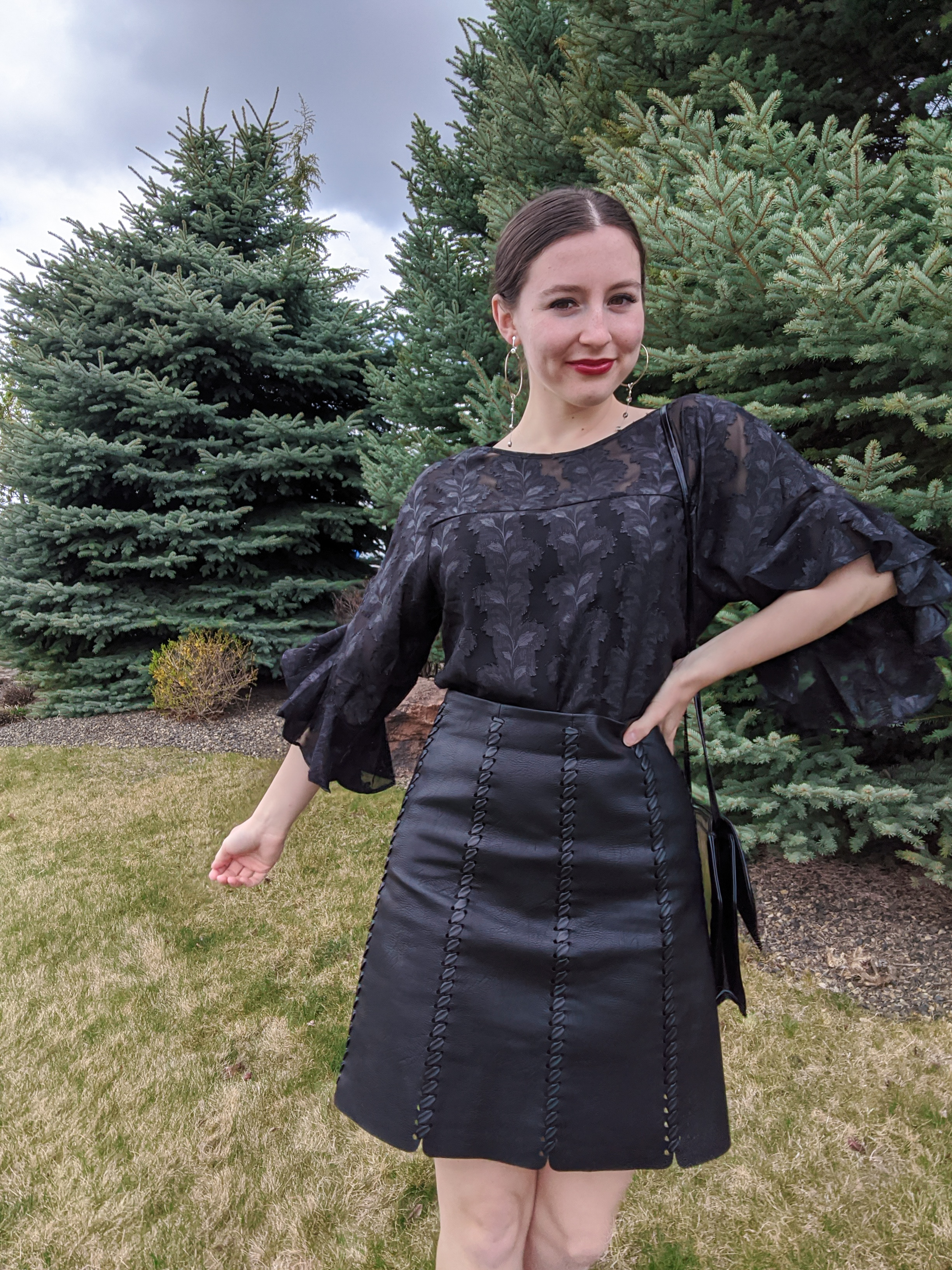 Since Jane is always styling blouses with unique details, I knew this sparkly top with the ruffle sleeves was the perfect place to start my outfit. From there I toyed with several different skirts but ultimately decided on this black pleather one, mixing girly with edgy, as Jane does. Jane sometimes styles her hair in a slicked-back low ponytail with a middle part. Because I don’t own a straightener and I didn’t want to be scrubbing crustified hair gel out of my scalp for days, I opted for a low bun instead and just left the baby hairs on the loose. I did do the middle part though! Which usually isn’t my thing, but I surprisingly liked how the hairstyle turned out with the makeup and earrings.

For makeup, I did simple liquid eyeliner, mascara, and a dark lip. I didn’t get the lipstick shade quite right—I definitely should have chosen a matte hue that’s darker and has more purple/mauve tones to look like Jane. But alas, here we are.

Jane doesn’t wear a lot of jewelry, but occasionally she does rock a fun earring, so I borrowed these really cute hoop earrings from my mom and temporarily attached them to my little clip-on converters (since I don’t have my ears pierced). Lastly, I slipped on some silver block heels and called it good. I wasn’t sure what kind of purse Jane would wear with this outfit, so I just decided on a classic patent black one.

Jane always dresses very nicely for work. While I would never wear this outfit to a job (unless, of course, I worked at a fashion magazine), I would totally style this look for a night out to dinner or an art show. I love how luxe it feels!

If you want to recreate Jane’s style, my best recommendation would be to wear a short miniskirt (probably black—either a suede, pleather, or patterned material), a collared blouse or sweater, a dark lip, and straightened hair with a middle part. Like I said, unlike the other TV characters I’ve styled so far, Jane doesn’t have such an easy-to-follow outfit formula. But this is just one way you can recreate her style! 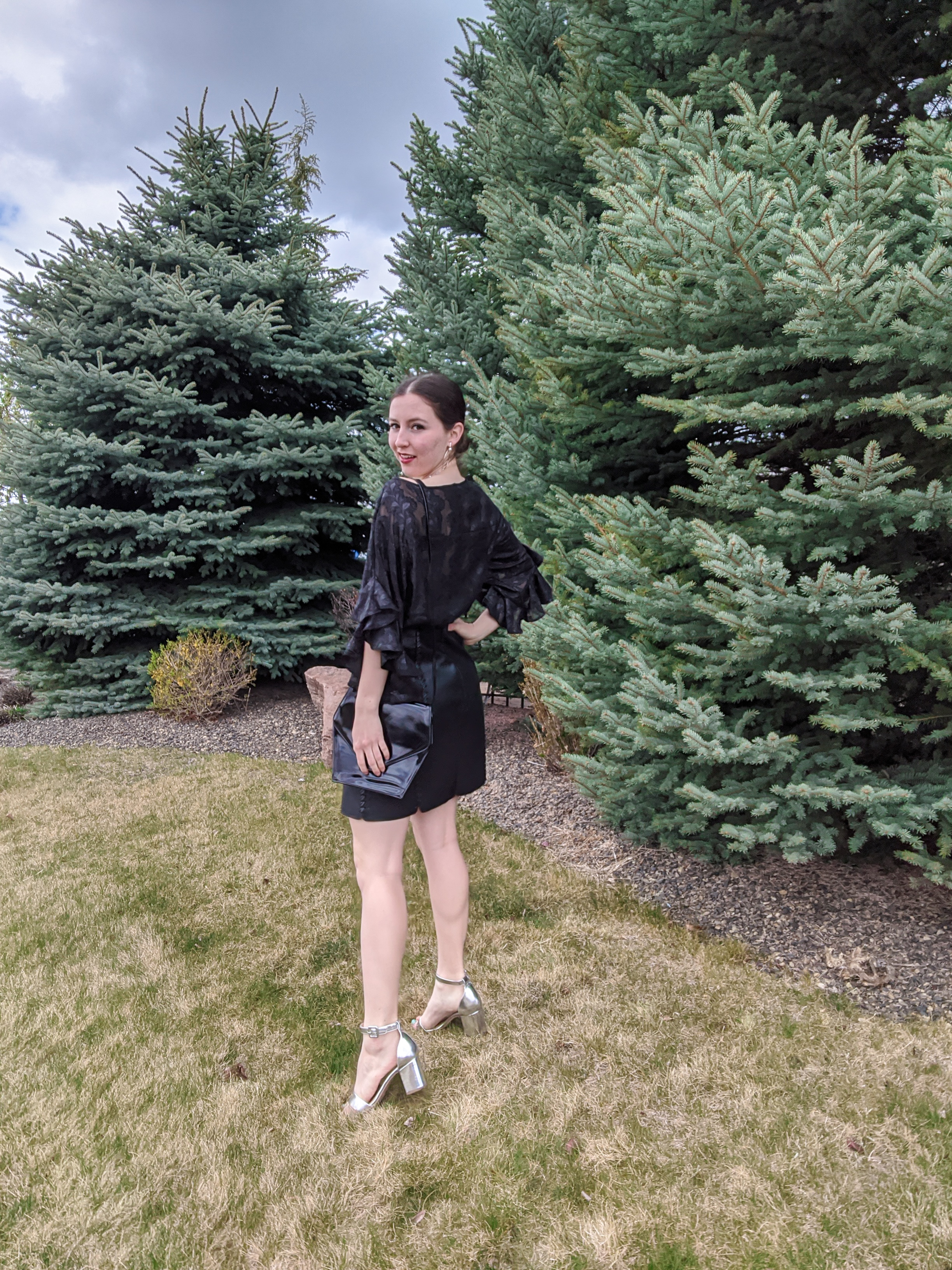 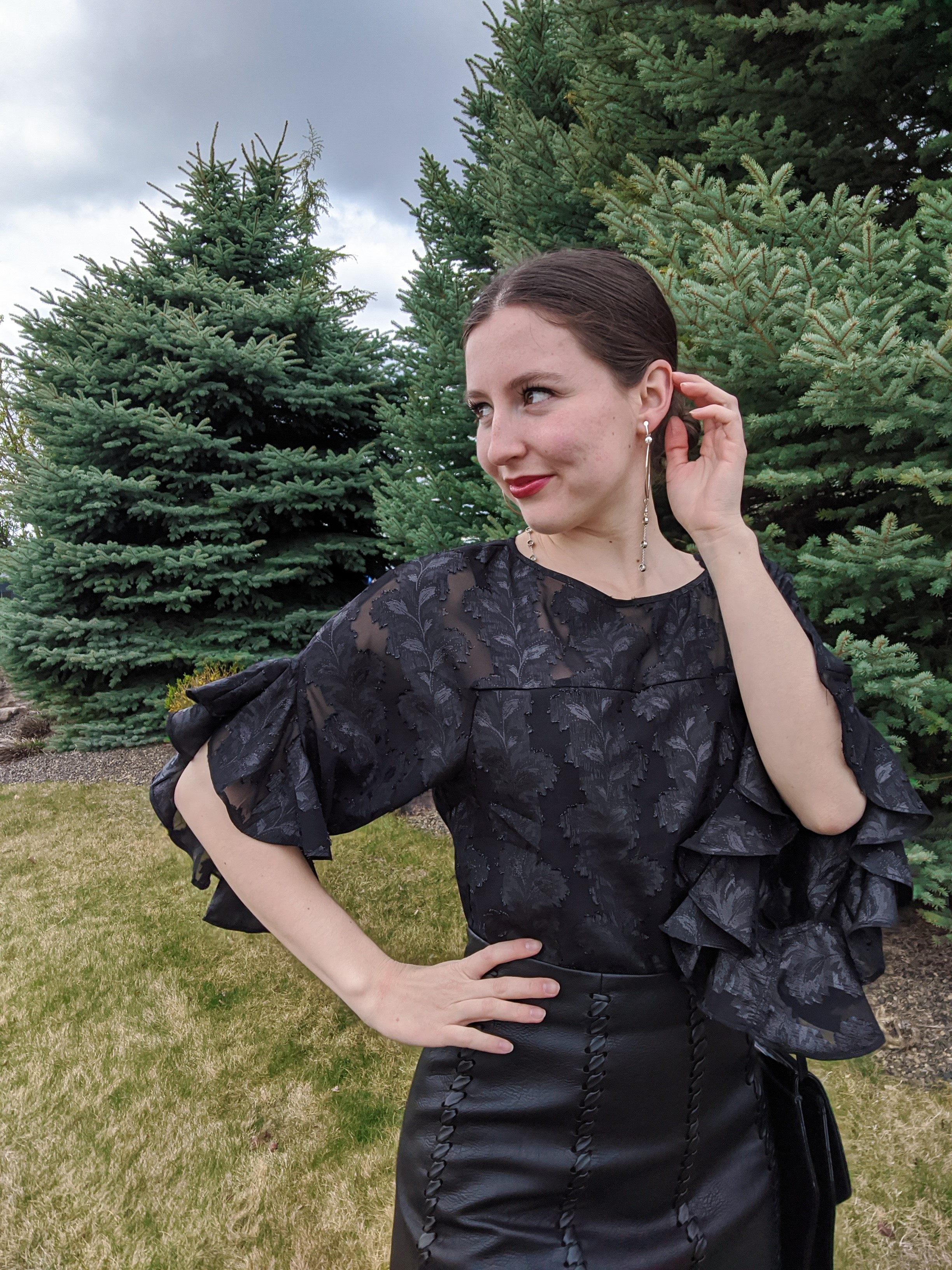 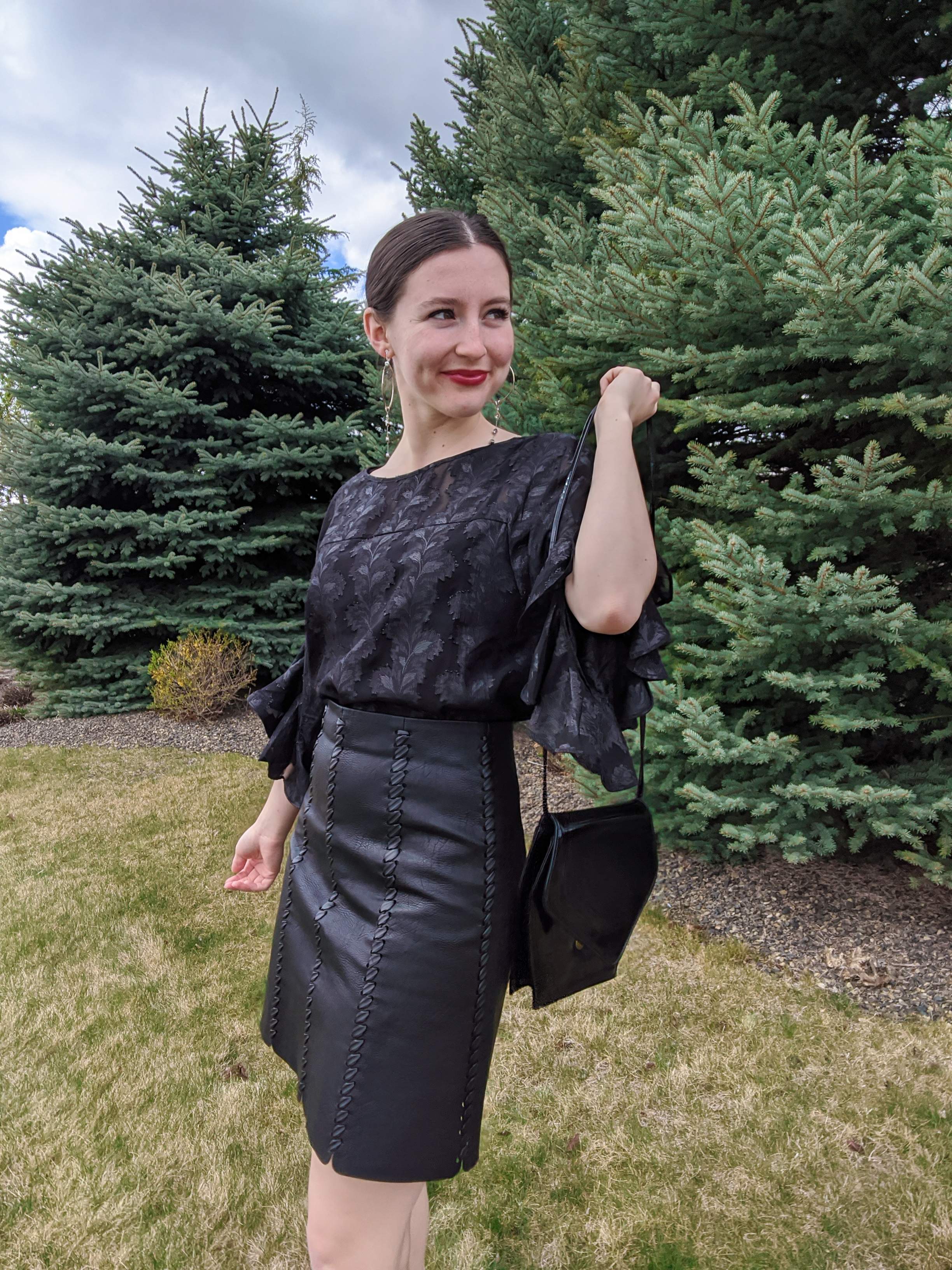 Have you ever heard of “The Bold Type”? This is the first show I’m featuring that I suspect a lot of people haven’t heard of before… It’s also the first show that’s still being produced! If you haven’t seen it, I highly, highly recommend it. It’s got humor, romance, meaningful storylines, and of course, amazing fashion. I would absolutely love to work at Scarlet, and I wish magazines weren’t a dying medium. Otherwise, I would try to work at one after college!

Also, I linked a bunch of items in the widget above for you to shop that I think Jane Sloan would totally wear. All of the pieces are from Francesca’s, my favorite store, who is currently having a major sale—everything on their site is $25 or less once you add it to your cart! But the sale ends tonight, so if you see something, grab it while it’s still discounted.

If you missed the first two posts in my Binge Worthy Fashion series, you can check them out below:

Hope you all are having a great Monday and are staying home and safe.