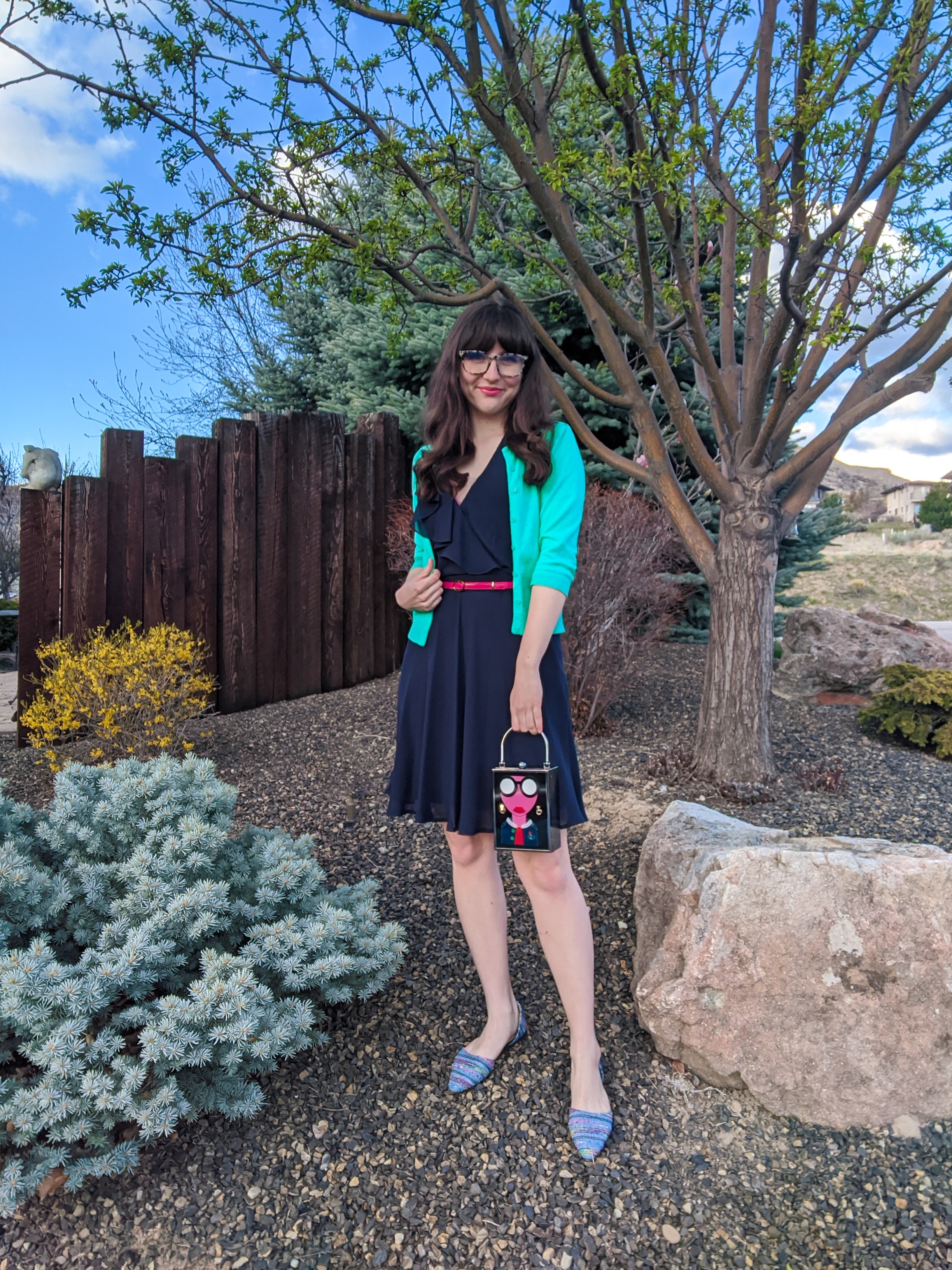 I’m back today with the second installment of my Binge Worthy Fashion series, where I discuss TV shows that have killer fashion and how to recreate the characters’ styles yourself. For the first post in the series, I discussed Mindy from “The Mindy Project”, and today I’m focusing on Jessica Day from “New Girl”. And no, I did not give myself bangs… More on that below! 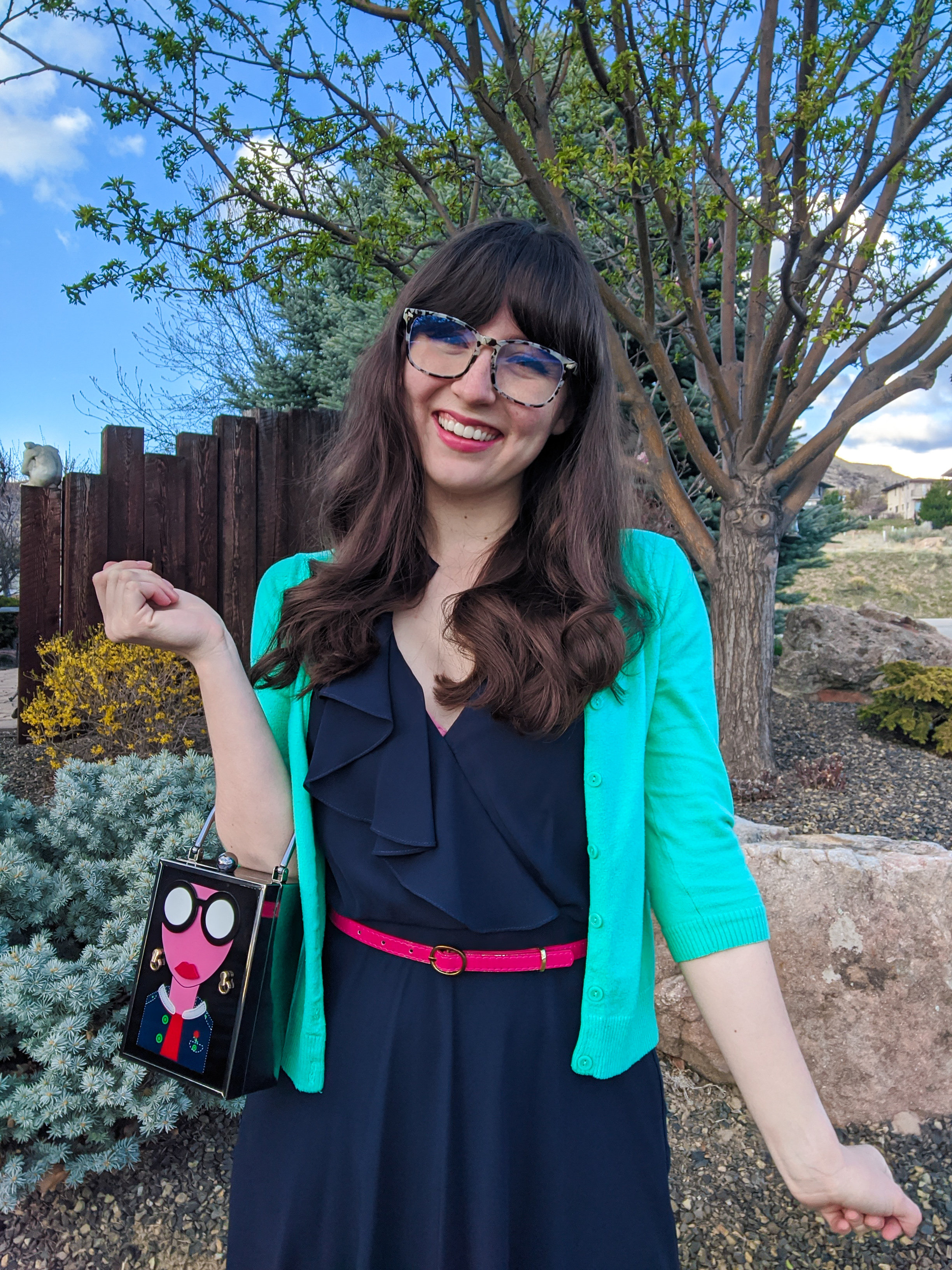 “New Girl” first aired in 2011 and had a total of seven seasons (That’ll keep you busy for a while!). The very quirky and vivacious Jessica Day, or Jess for short (played by Zooey Deschanel), decides to move into an LA apartment with three single guys whom she does not know. The four of them, along with Jessica’s best friend CeCe (who’s a model), form an unlikely and very close friend group throughout the show. I remember when “New Girl” was still on TV, but I only just decided to start watching it last fall… mainly because there were no other shows in which I was interested, and the series was available on Netflix (it still is!). BUT after starting it (and hearing lots about it), I became hooked pretty fast. The relationships and Jessica Day especially are just so awkward that I couldn’t help but relate! And the witty banter between all the characters always made me laugh.

Fair warning, “New Girl” is definitely the type of show that you either love or… you can’t stand. It has some dumb humor, which usually isn’t my thing, and Jess’s character is a lot. But it can’t hurt to watch a few episodes and give it a try! I was really into it for the first two seasons but as is common with most shows, as the seasons went on, the show got less and less good… Regardless, the later seasons make for a great background show while multitasking, and the first few seasons can be pretty hysterical. Overall, it’s a fun, light-hearted series to pass the time (oh, and it has cute fashion, of course). My favorite character is definitely Schmidt, and if you’ve seen the show, you probably know why—he’s a Type A personality, like me, and he has the best lines by far, in my opinion. Not to mention, he has to pay a dollar to a jar every time he’s a… “nuisance,” we’ll just say, in order to keep the blog PG… For my dad’s birthday I made him a jar, inspired by “New Girl”, where he has to pay a dollar every time he makes a Dad Joke, ha! Don’t worry, I don’t actually make him pay. Usually… 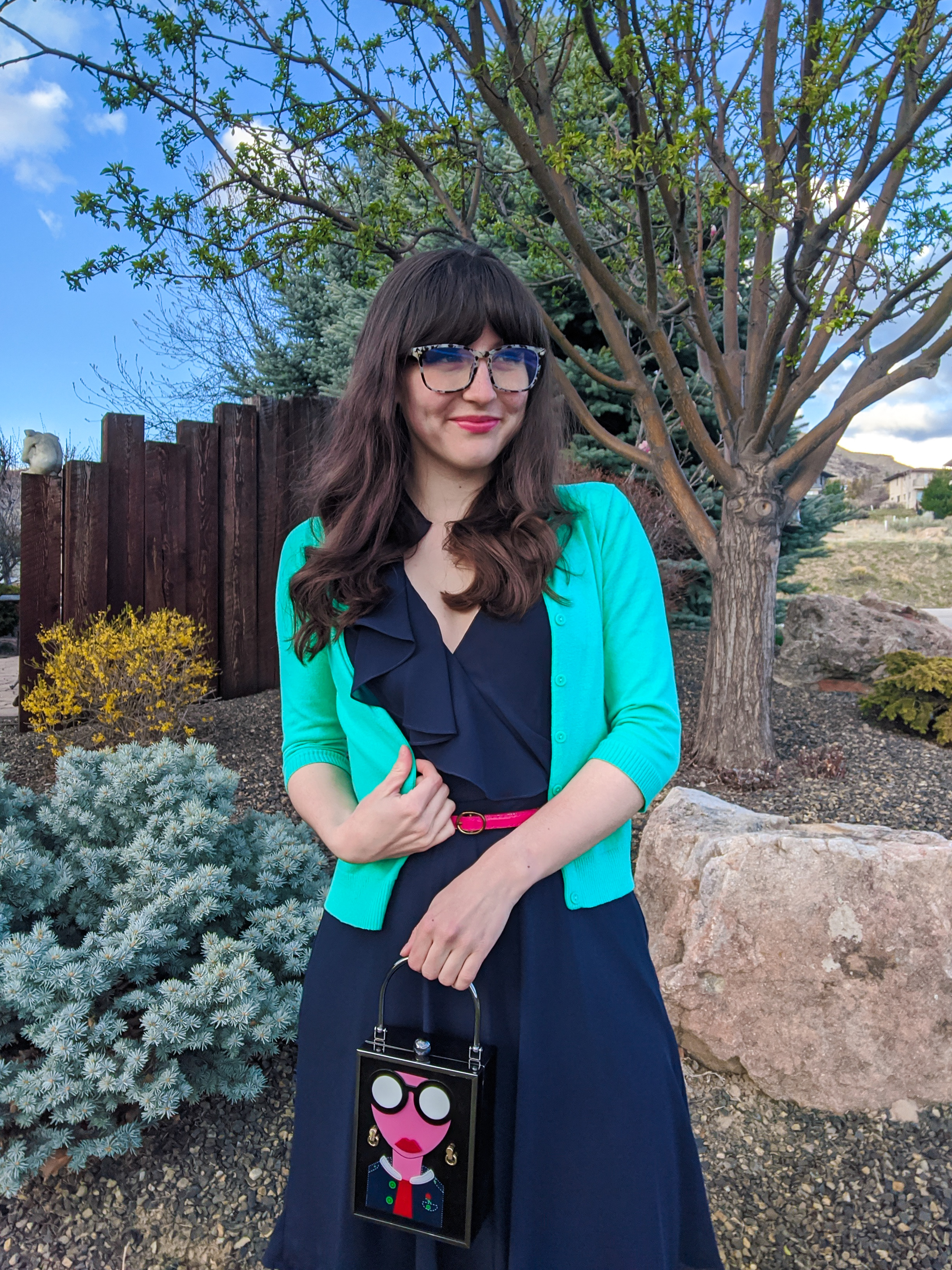 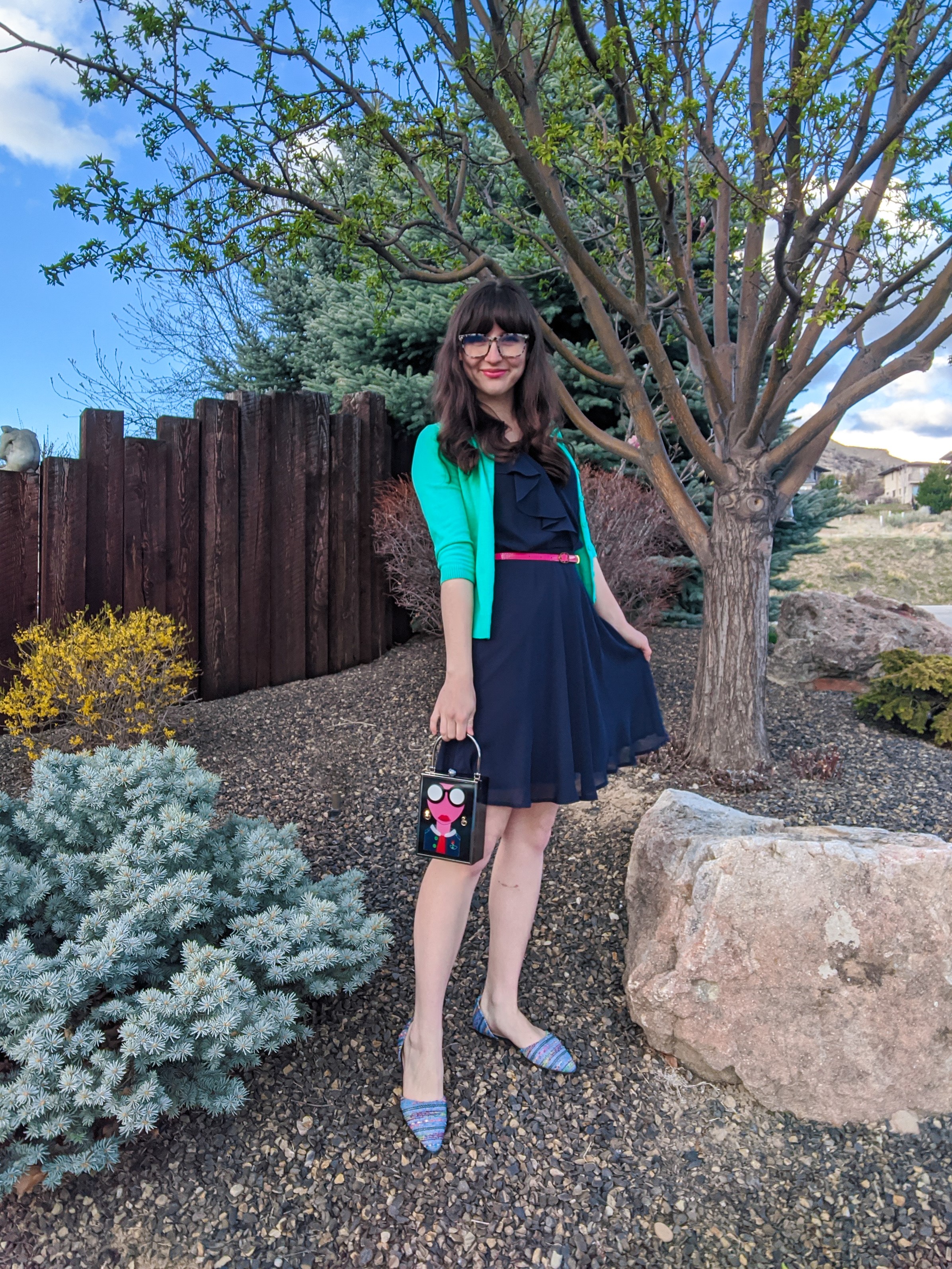 Just like Jess’s personality, her style is very quirky—and cute! Jessica is an elementary school teacher, so she usually looks very put-together and wears lots of cardigans. Her style is very feminine and girly, and Jess is rarely seen in anything other than a dress or skirt (although occasional she rocks a very cute sailor short). She doesn’t wear very much jewelry, if any, but she has the cutest glasses and bangs to frame her face and bright blue eyes. She wears black eyeliner, lots of eyelashes (fillers, almost certainly), and a muted red lip. My favorite part about Jess’s style? She usually wear flats! Finally a fashionable character who doesn’t wear heels all the time, ha. (If you haven’t caught on from my prior three and a half years of blogging, I can’t really walk in heels.) Another signature of Jess’s style is A-line or fit-and-flare pieces, and she never shies away from bright colors, bold patterns, or big bows. Some of her most fun color combos have been cherry red and baby blue, and mint green and soft yellow. The perfect inspiration for spring outfits! Or at least, outfits that will brighten up your days spent at home… 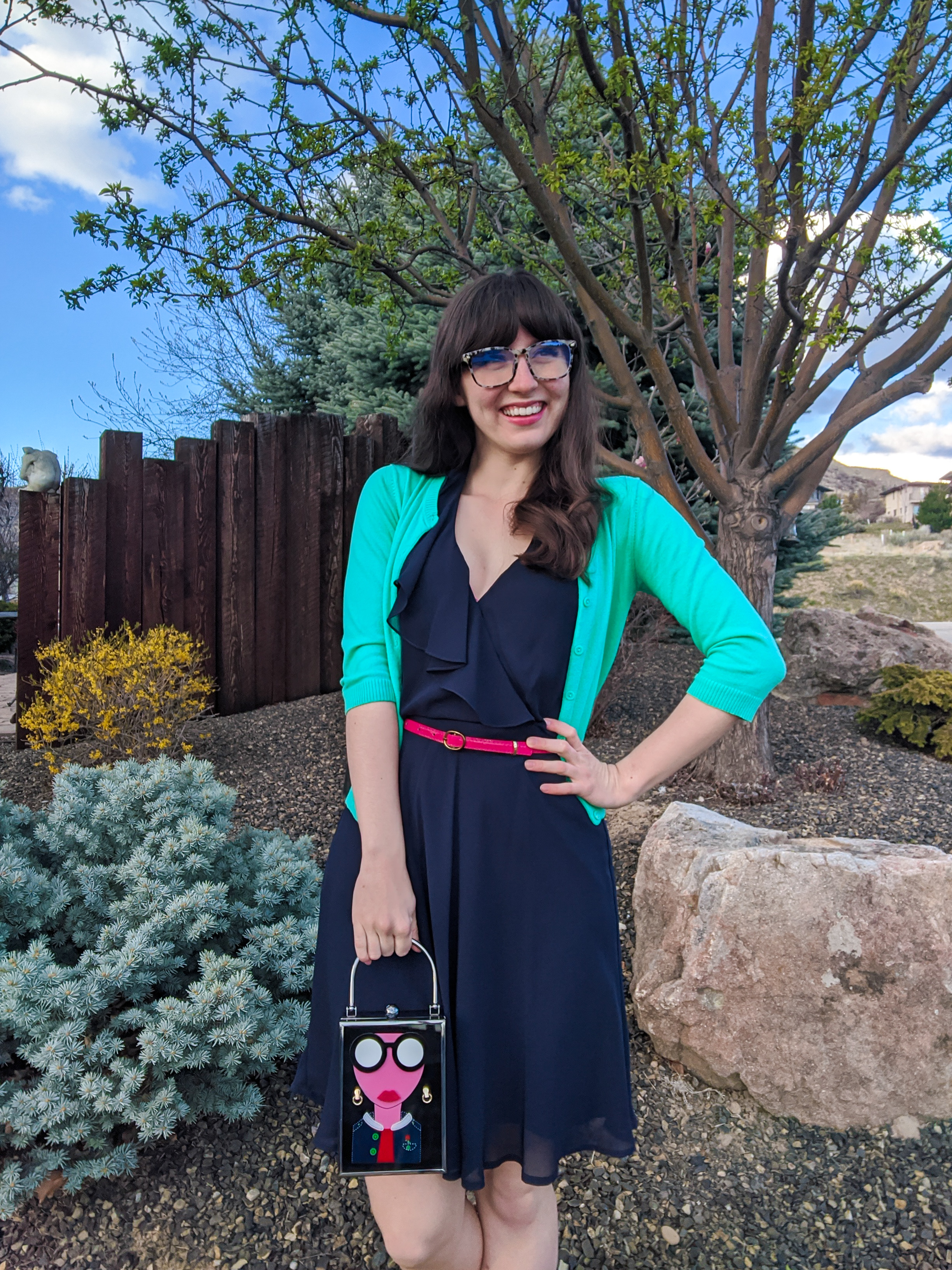 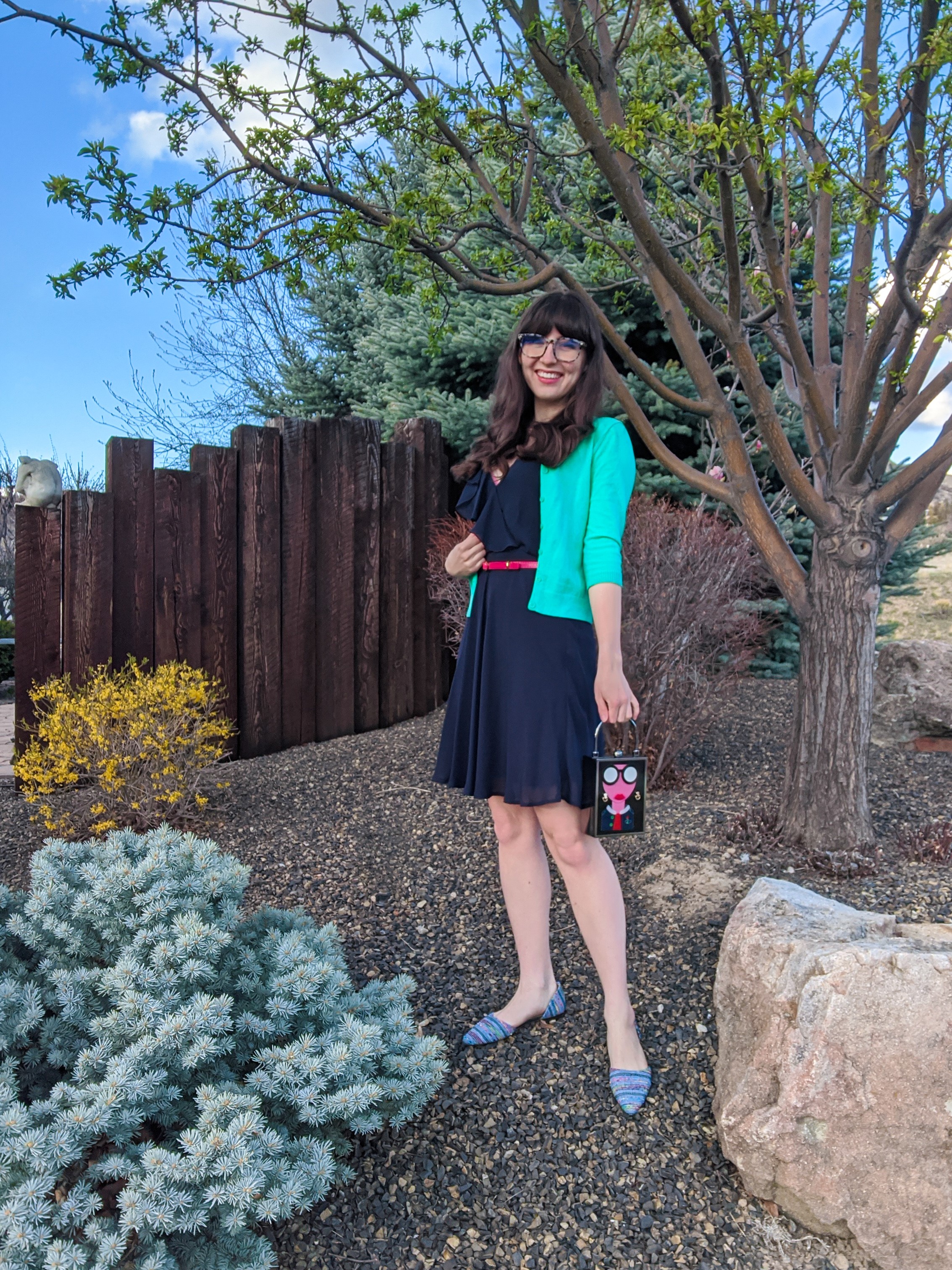 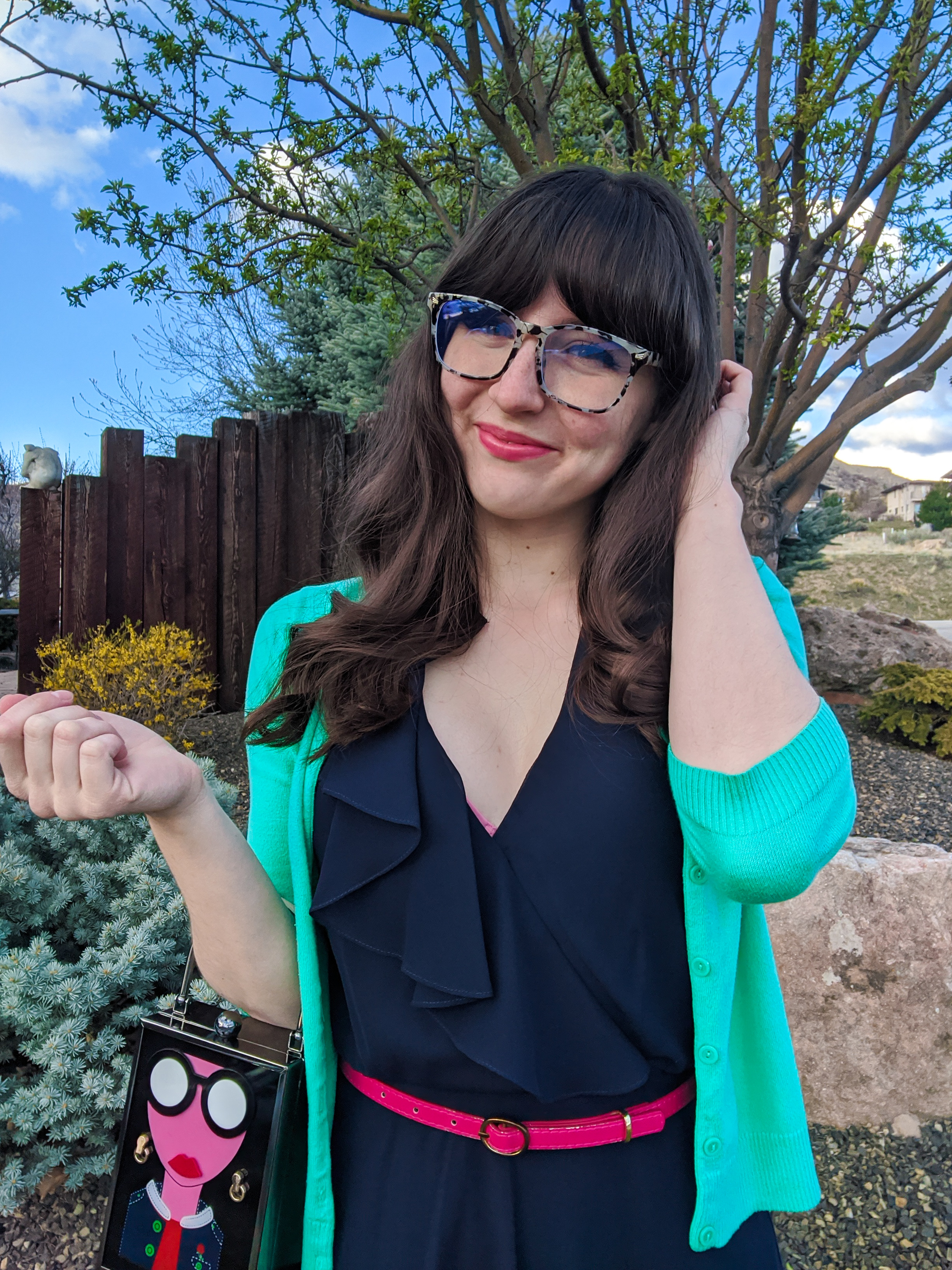 When I started brainstorming Jess-like outfits, my first reaction was to choose a cardigan and build an outfit around that. So naturally, I picked the boldest, funkiest colored cardigan I own! You could really start with any cardigan just as long as it’s not neutral—Jess rarely wears neutral colors. Next, I experimented with a variety of fit-and-flare dresses and skirts from my closet… but ultimately none of them either A) matched the funky color of this cardi or B) were colorful enough for Jess (I own a surprisingly large amount of strictly black and white patterned items). So I decided on this navy dress instead, and while it is not fit-and-flare style, it is flowy and has ruffles, which I figured were girly enough for Jessica Day.

I skipped jewelry entirely but I opted for some additional color in a pink belt and this super fun box purse. Jess wears some pretty unique purses in the show! She even gets into a fight with CeCe about a particular yellow purse in one of the episodes. Anyway, I finished the accessories off with a pair of patterned denim d’orsay flats, just to add a little pizazz to the look. Really, the most basic outfit formula to recreate a Jessica Day outfit is a fit-and-flare dress + a cardigan + a belt + flats = Jess Day’s style. She wears lots of belts, and if you just remember the simple combination I listed, you can create endless Jess-inspired looks!

Finally, I finished my outfit with winged black eyeliner and pink lipstick (I figured pink would look better with my belt and purse than her signature red). Oh, and I threw on my pair of blue light glasses! I think I’ll be wearing them a lot more now that my classes are entirely online. And lastly… the big question… my faux bangs! Jess has the cutest curled hairstyle with long bangs, and I knew I had to recreate them for this blog post. I followed this tutorial from YouTube to do it. It’s way different than other faux bang tutorials I’ve seen in the past, but it’s actually pretty easy to do, minus several minutes of futzing to get the bangs just right. Mine are actually pretty uneven if you look closely, but luckily my glasses cover up the mess for the most part. I would not actually wear this hairstyle out and about, as my baby hairs were loose and driving me absolutely crazy. BUT the bangs are super cute nonetheless!! It was really fun to try out a different hairstyle for the night (and this is a great way to test the look if you’re considering getting a “fringe”). 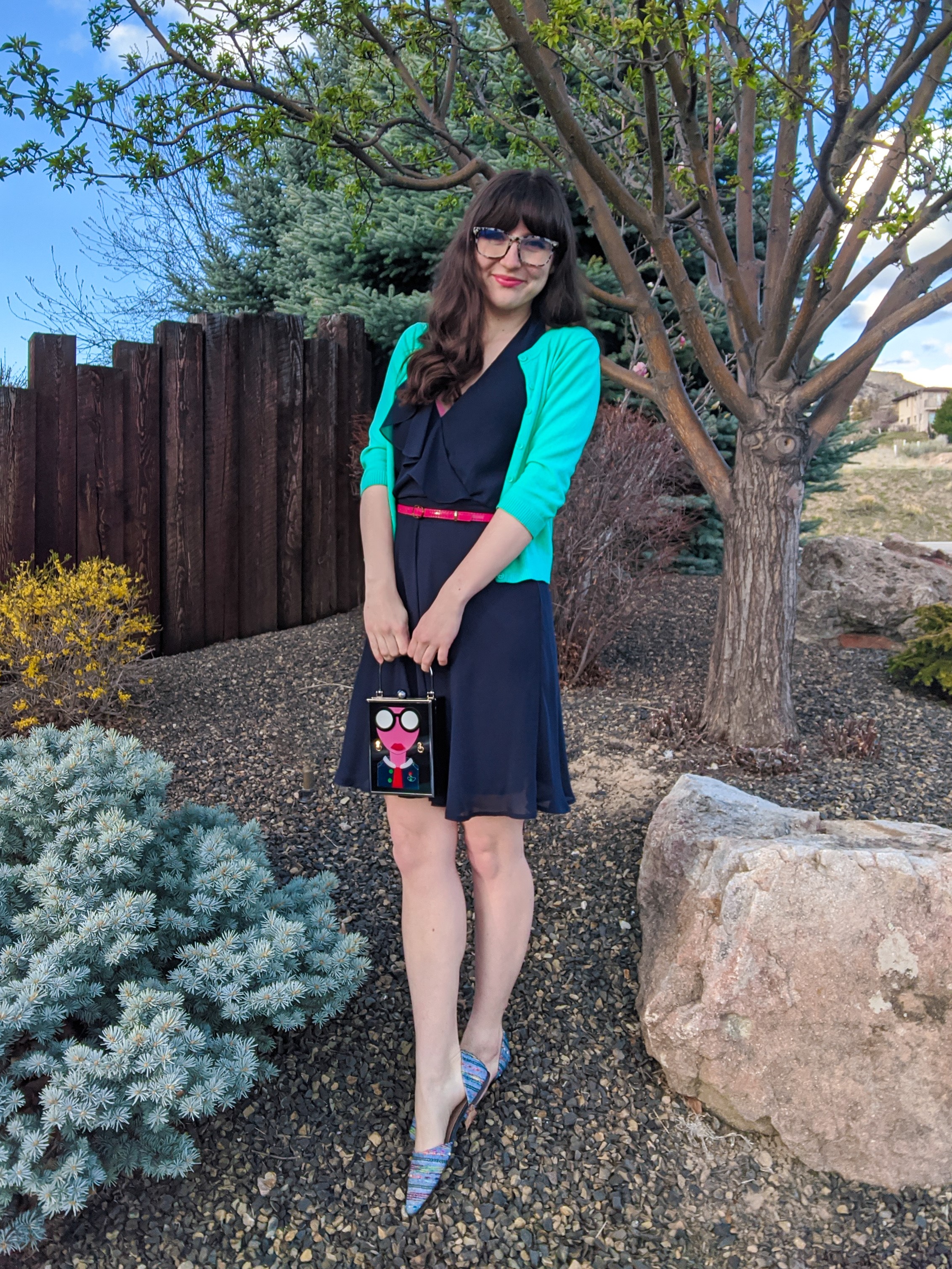 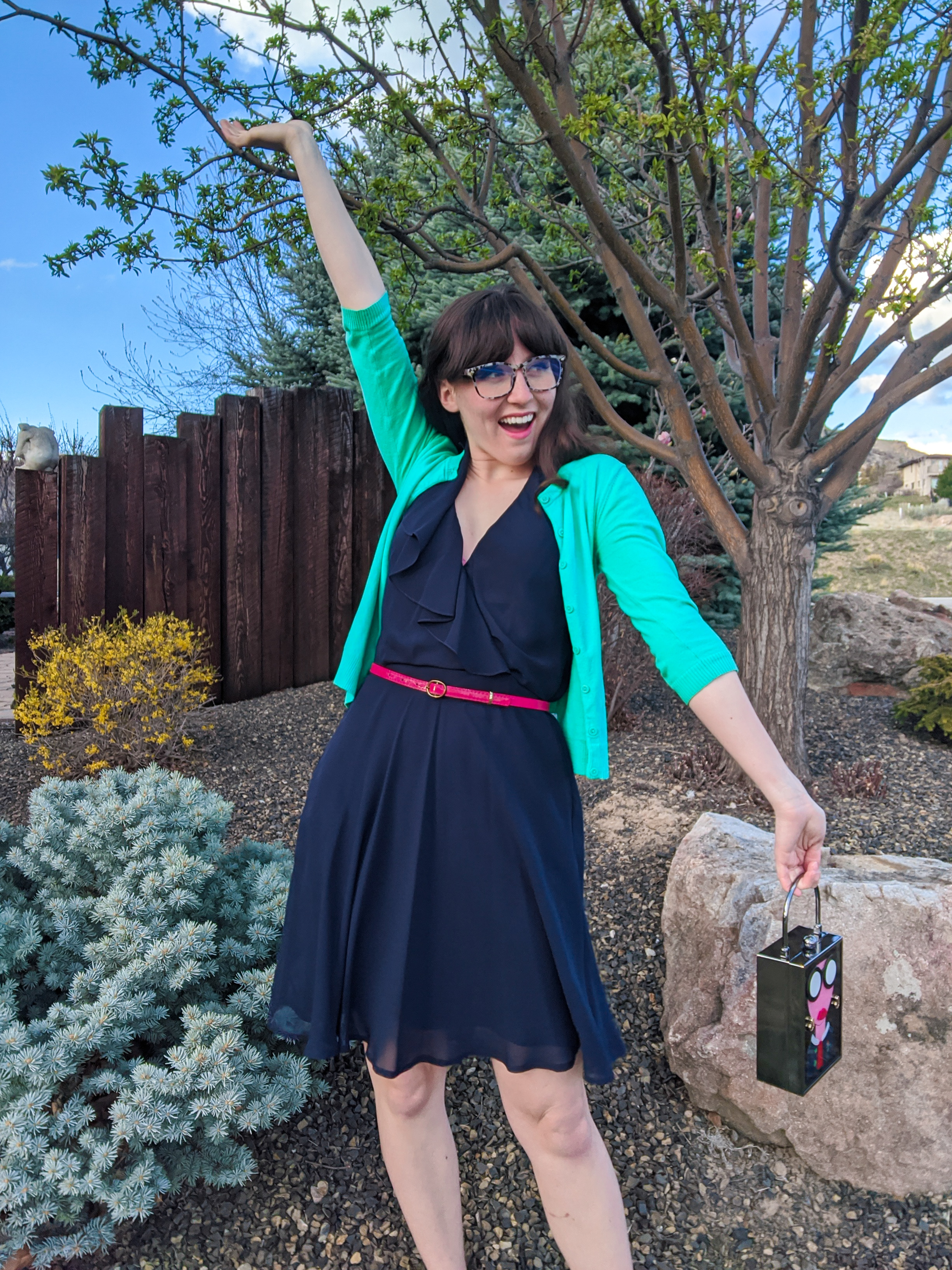 So what do you think?? Have you seen “New Girl” before? And more importantly, would you rock her girly and sometimes quirky style? I definitely felt like a teacher in this outfit, but I kind of loved it! I will surely be wearing this look in the future.

I hope you are having a great Monday, and if you’re starting online classes today (like me), then best of luck! Stay tuned for the next installment of this series, to be published a week from today, and click the link below if you missed the first post.