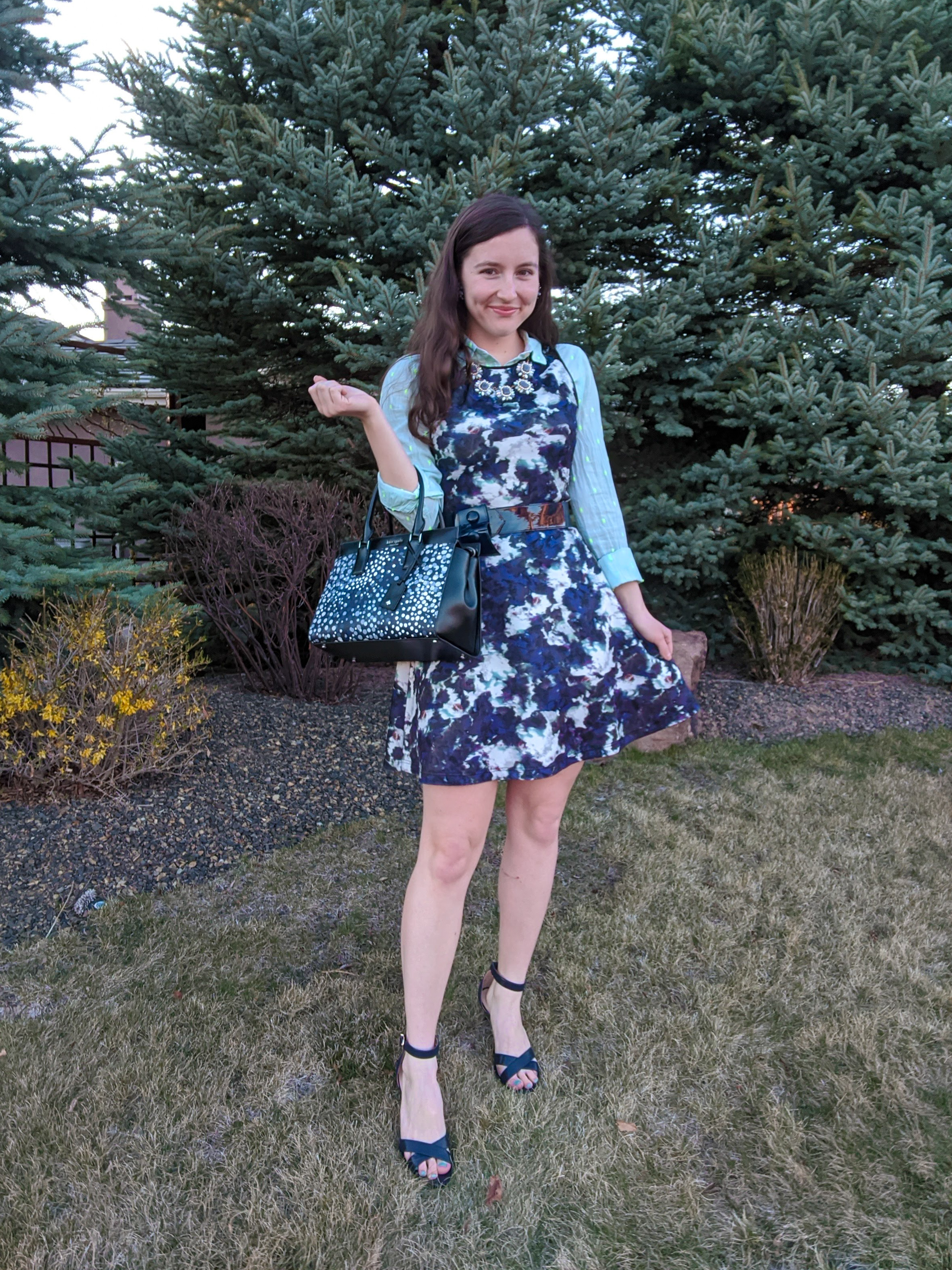 I am SO excited for today’s blog post because I’m announcing the start of a new series… Binge Worthy Fashion! Since we’re all being responsible and staying inside most of the time (which means, we’re all undoubtedly binging lots of TV), I decided to share some TV shows with killer fashion. In doing so, I’ll be discussing both the show, in case you need new recs, as well as the main character’s sense of style and how to recreate it yourself. If you’ve been a long time follower, you may recall my post from way back in 2017 called “The Most Fashionable Shows on TV”, where I briefly touched on some stylish series. Well silly me, at the time of writing that post, I had never actually seen the majority of those shows, ha! It’s safe to say I have since accomplished my fair share of binging. So without further ado, here is the first installment of the blog series that I am SO excited about: recreating Mindy Lahiri’s style from “The Mindy Project”. 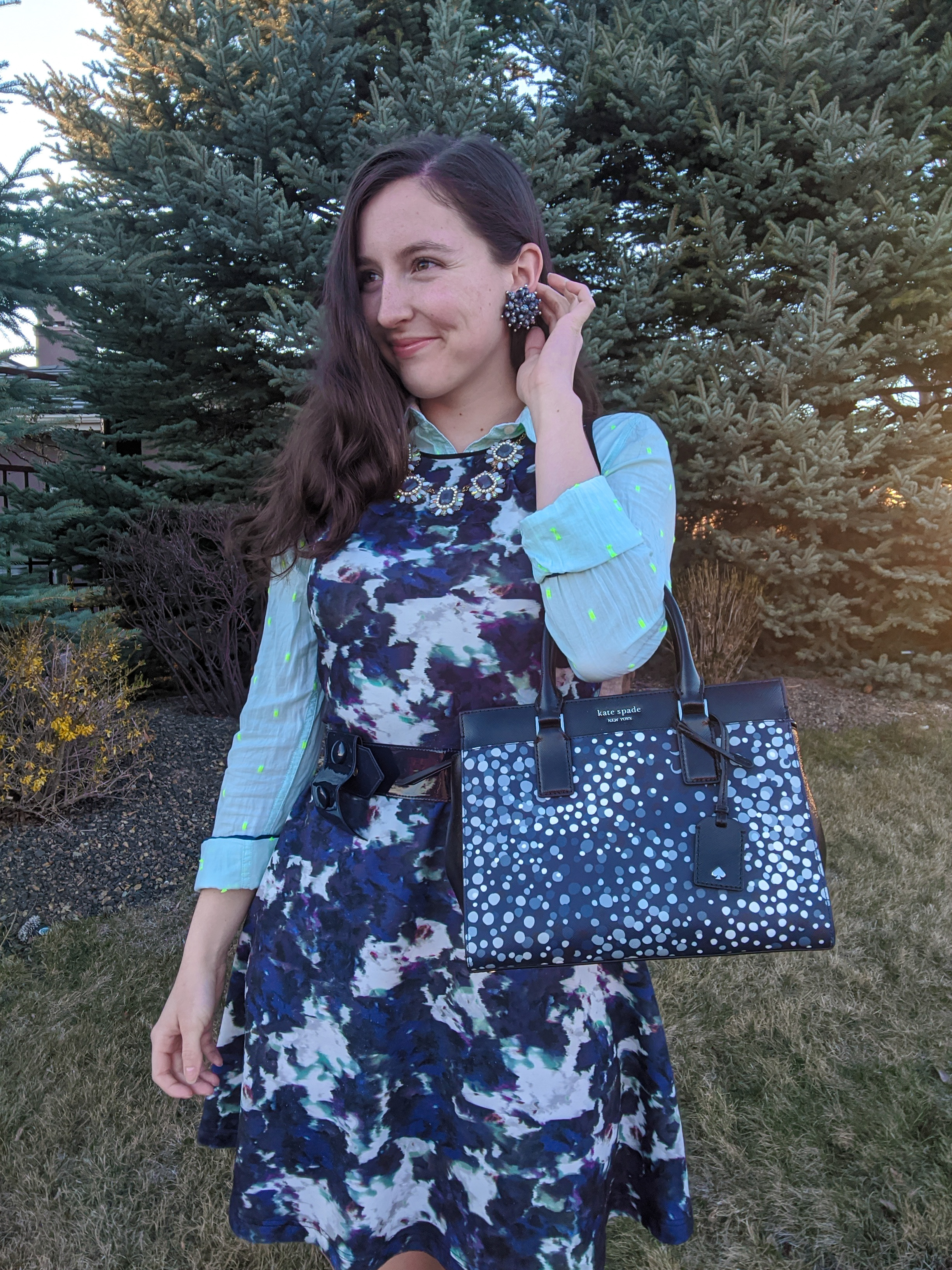 “The Mindy Project” is a comedy about a bear claw-obsessed OB-GYN doctor based in New York City. The show stars Mindy Kaling (you may know her from “The Office”), and it first aired in 2012, followed by six seasons. Mindy’s character is hilarious and witty as she seeks to balance her work, her romantic life, and her being “a petite Asian woman,” which is a phrase you’ll come to learn she uses quite often. My favorite part of the series is that Mindy talks a mile a minute and embeds little jokes in every sentence, so it’s impossible not to laugh as she goes off on her rants. Not to mention, she has the cutest apartment and office, if you’re also needing home décor inspo during social distancing, and she’s full of great ideas to pass the time, like watching videos of babies who are startled by their own farts (possibly the hardest I ever laughed while watching the show).

My mom and I first discovered “The Mindy Project” when reruns still played on TV late at night. After a few episodes, we became hooked, and I even received DVDs of the full series at the following Christmas. Now that I write this I’m thinking… hm. I should rewatch it! If you’re interested in “The Mindy Project”, you can currently stream it on Hulu or Amazon Prime. 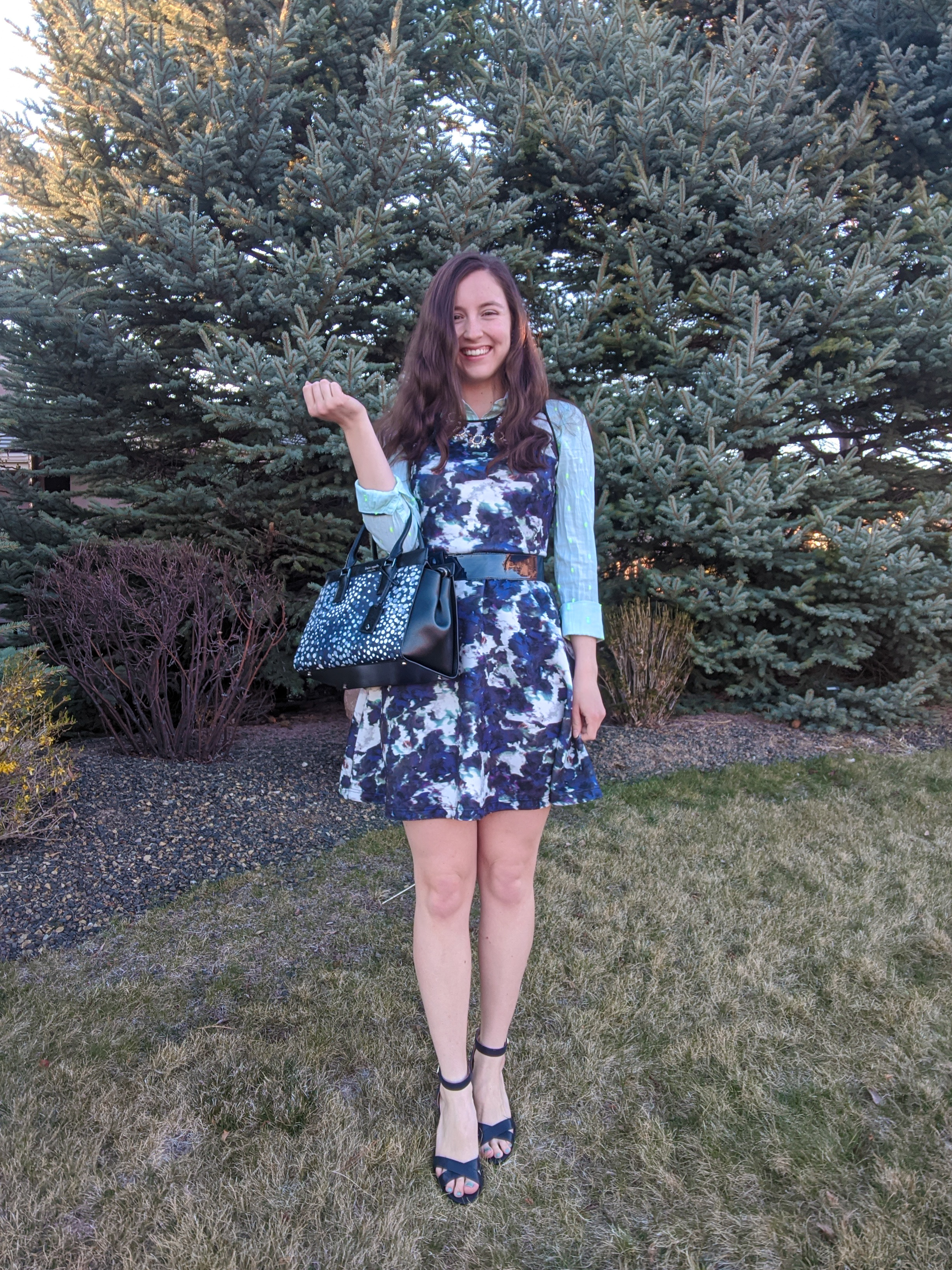 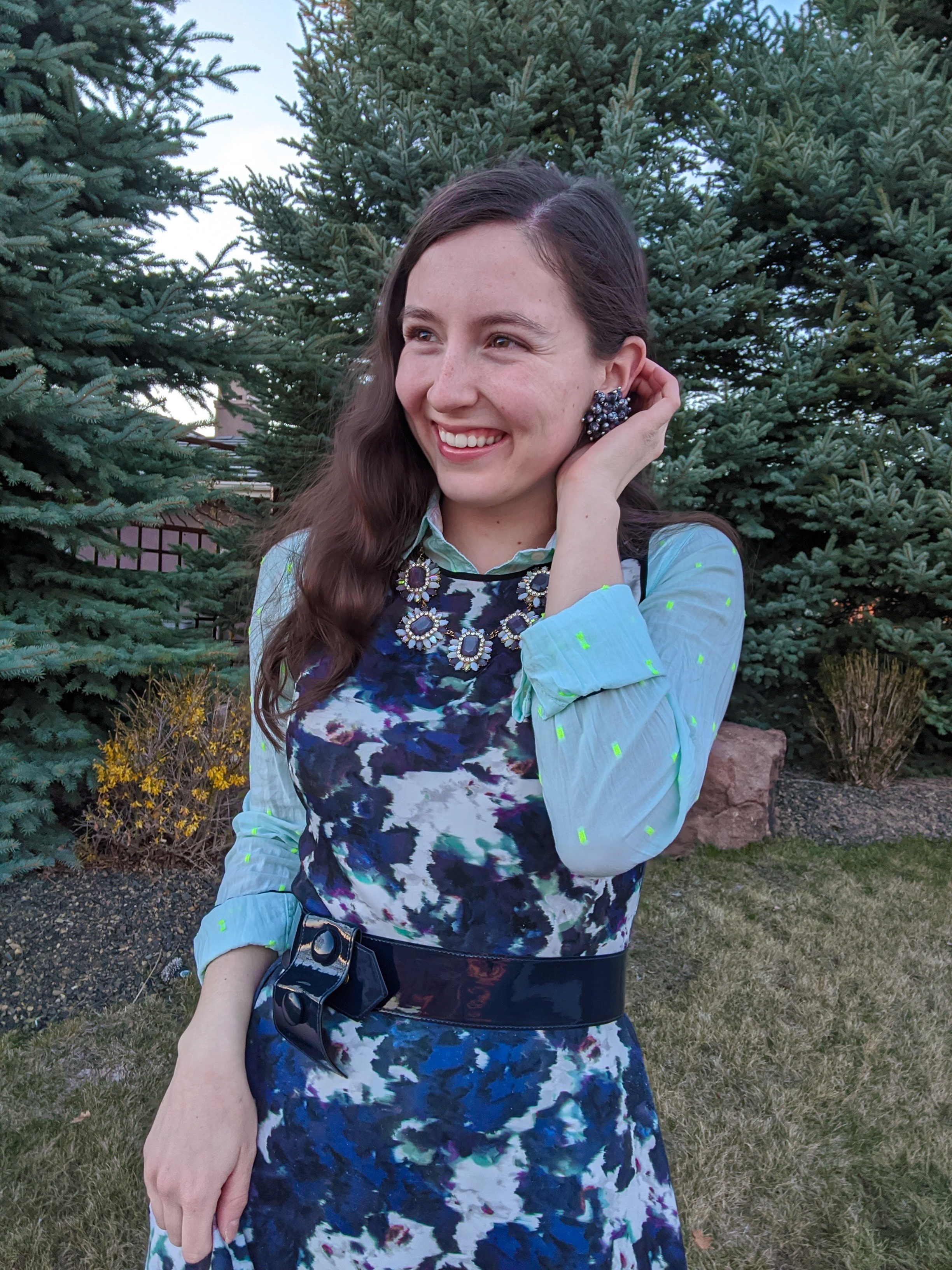 Mindy Lahiri’s style is bright, bold, and designer! She’s known for her big Chanel handbags and Kendra Scott earrings, and Mindy loves pairing crazy patterns, textures, and colors together. Emphasize patterns. She also loves a good matching set and making sure all the colors and accessories in her outfits go together. And her outerwear? Mindy is always wearing a killer overcoat, usually one in a bright color that matches the length of her dress/skirt, as she’s rarely seen in pants. Mindy also isn’t afraid to show off her curves, which I love, so while she sometimes wears fit-and-flare style pieces, she also rocks tighter pencil skirts in bright colors or bold patterns. And of course, we can’t forget her heels! Mindy is rarely not in heels—even her exercise ‘running shoes’ are wedge sneakers. 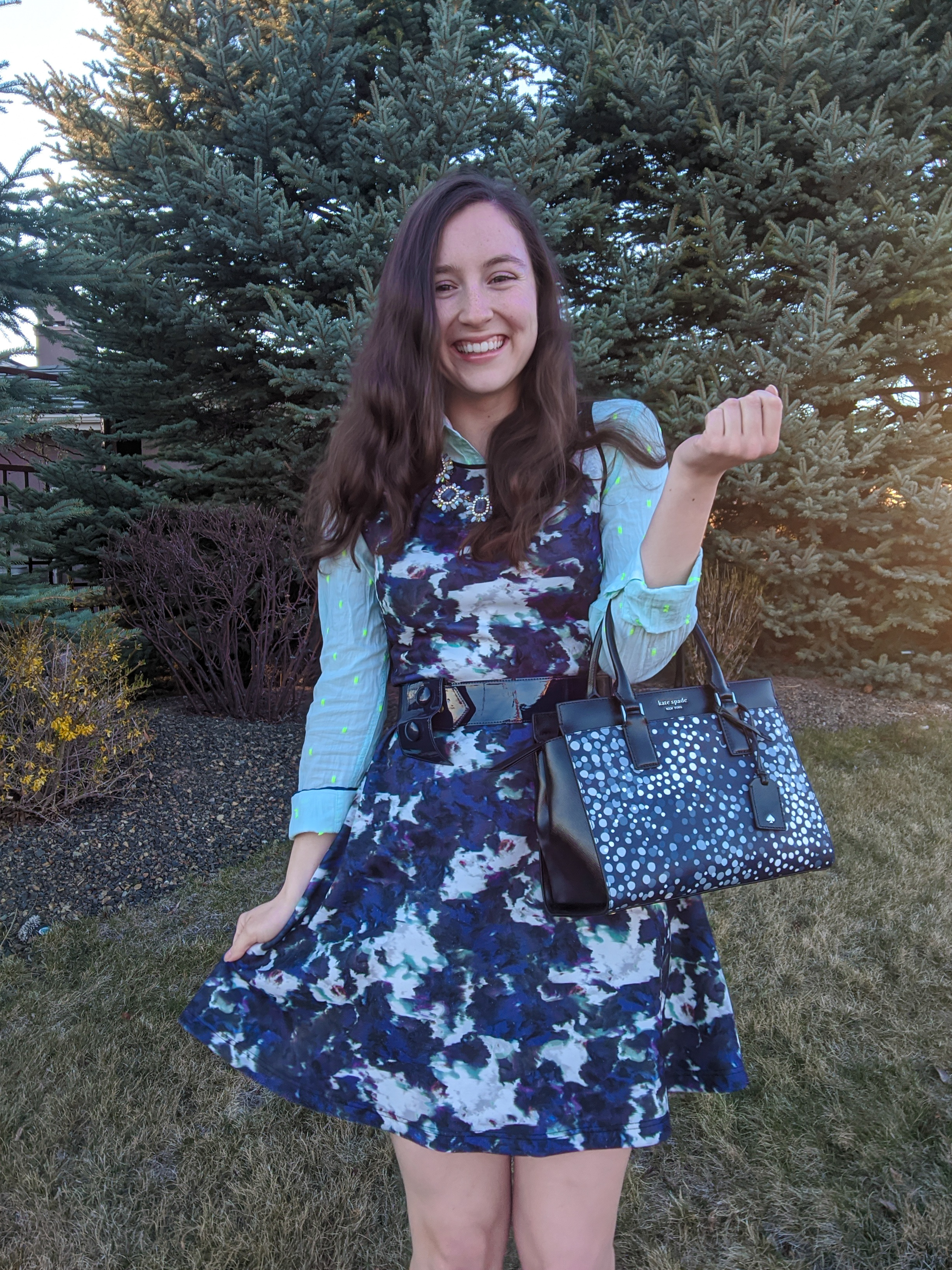 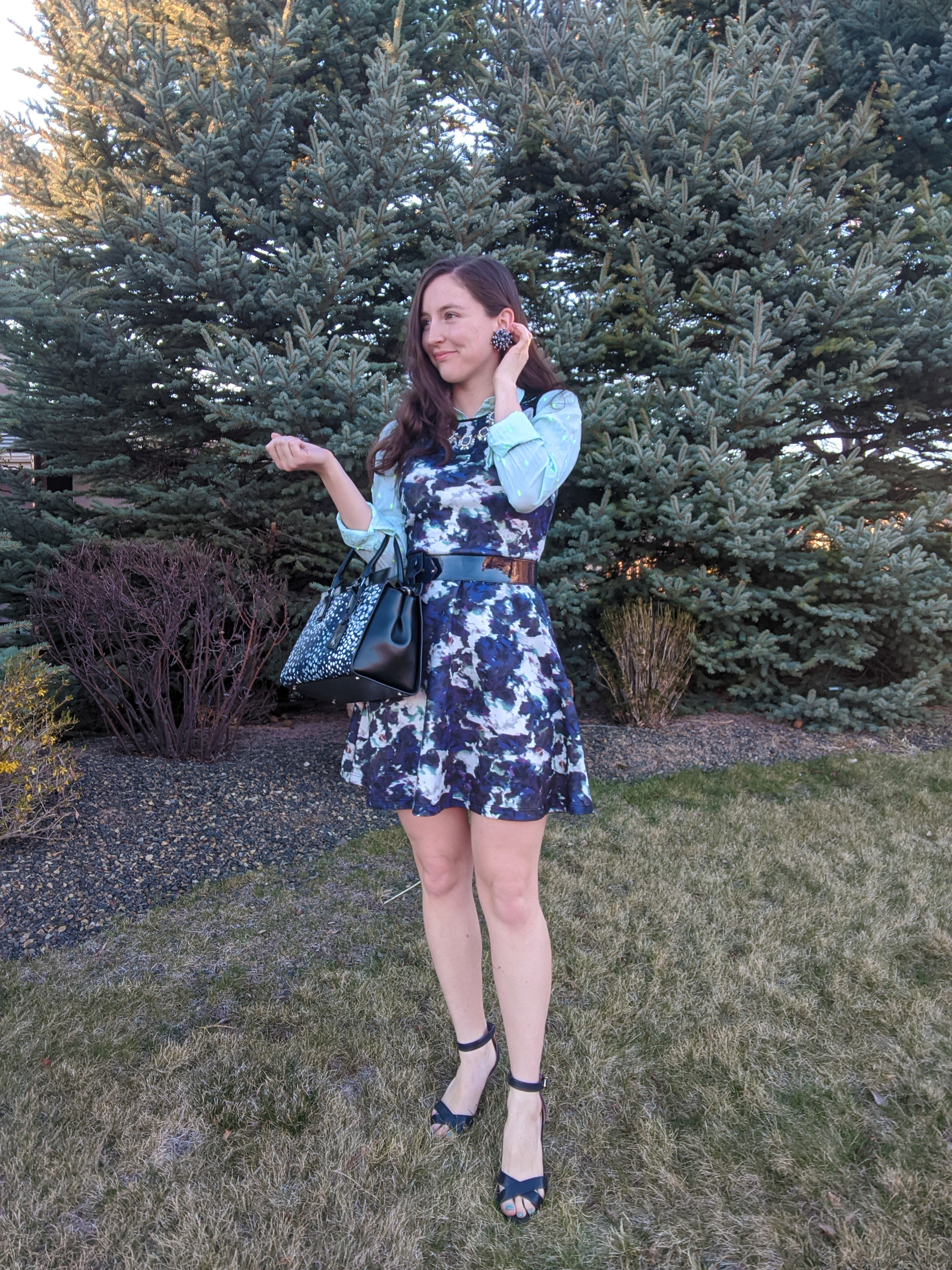 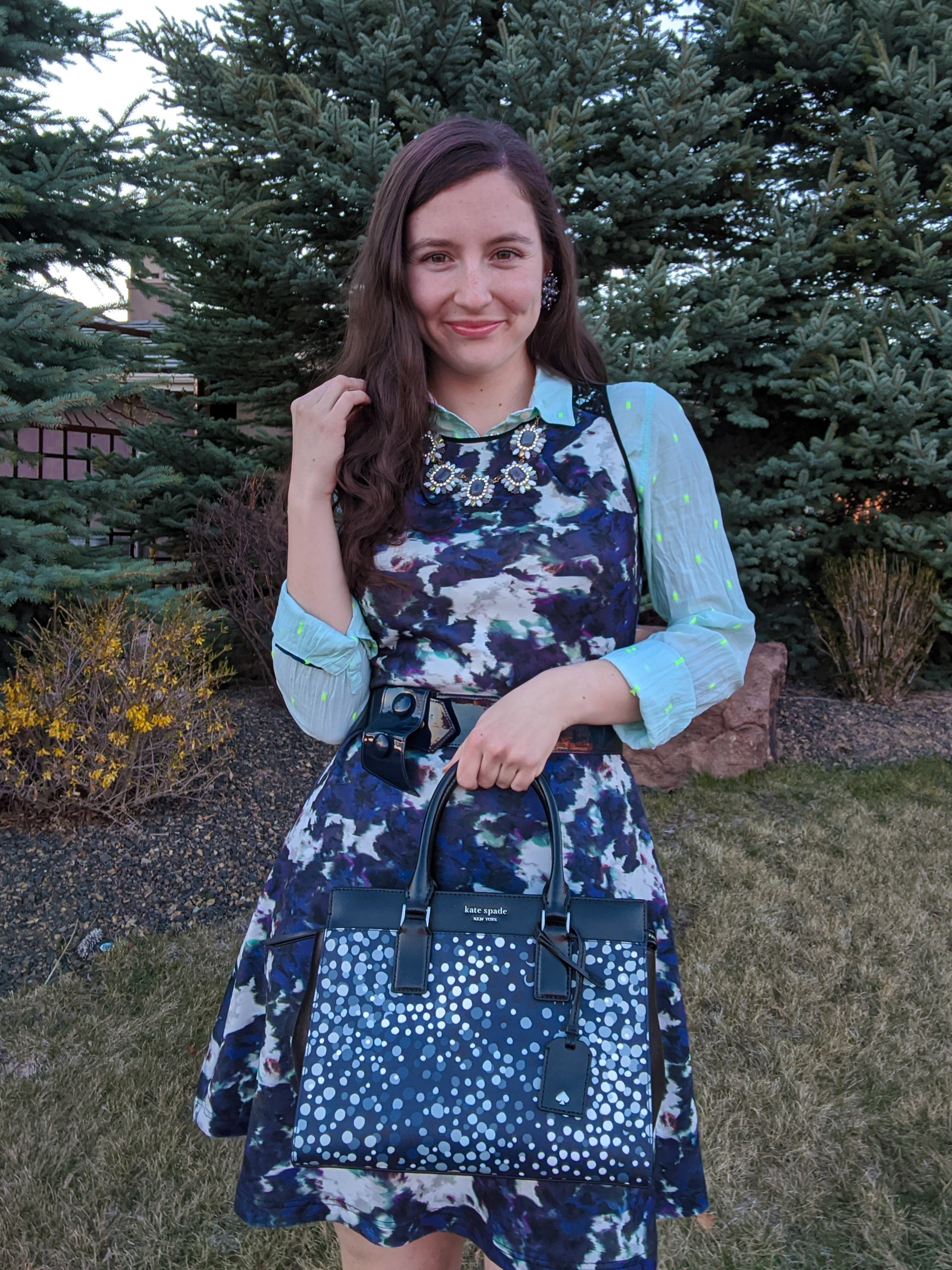 To channel my inner Mindy Lahiri, I knew I wanted to layer a collared shirt under a dress—one of her signature looks. I started with this purple patterned dress because of its thick material (hides the fabric of the shirt underneath) and because of the neckline. When you have a professional-style dress that you want to layer a collared blouse under, you have to make sure the neckline is higher and most-likely a scoop shape. A v-neck spaghetti strap dress would look weird with a collared shirt underneath, you know?

As I was looking through my collection of collared shirts, I decided on this teal one with the neon rectangles because A) Mindy loves neon, and B) the color of the blouse matches nicely with the patches of teal in the dress. Other possible collared shirts that would look good with this dress are a classic white button-down or even a grey pinstripe piece. Since you’re using Mindy as inspiration, don’t forget to pair patterns together that you wouldn’t otherwise try! I linked a collared blouse in the shopping widget at the end of this post that would be perfect for layering under dresses; it comes in lots of colors/patterns and is lightweight and thin enough to make it easy to layer.

For accessories, I opted for my big starburst clip-on earrings and a chunky bedazzled necklace. Even though the trend these days is daintier jewelry, I’m still in love with bold statement pieces, and Mindy clearly rocks the big sparkly pieces too! I also added a classy, old-fashioned, navy blue belt to really accentuate my waist. I paired the look with navy heels (too matchy-matchy?) since Mindy is almost always rocking stilettos, and I left my hair down, like she quite often does.

Of course, I couldn’t forget about the handbag. This gorgeous Kate Spade dotted bag was my birthday present last year, and I’m absolutely obsessed with it. It’s my first true handbag, as opposed to just a regular crossbody purse or clutch, and I always feel like such a boss lady when I wear it. And paired with this outfit?! I was feeling like I could kick some major booty!

Even though the colors in this outfit aren’t super bright, I still think Mindy Lahiri would totally rock this look to the office. And you? To recreate Mindy’s style, think layers, pattern mixing, and bright color combinations. Pencil skirts and big earrings are also a good choice, as she’s always dressed to impress! 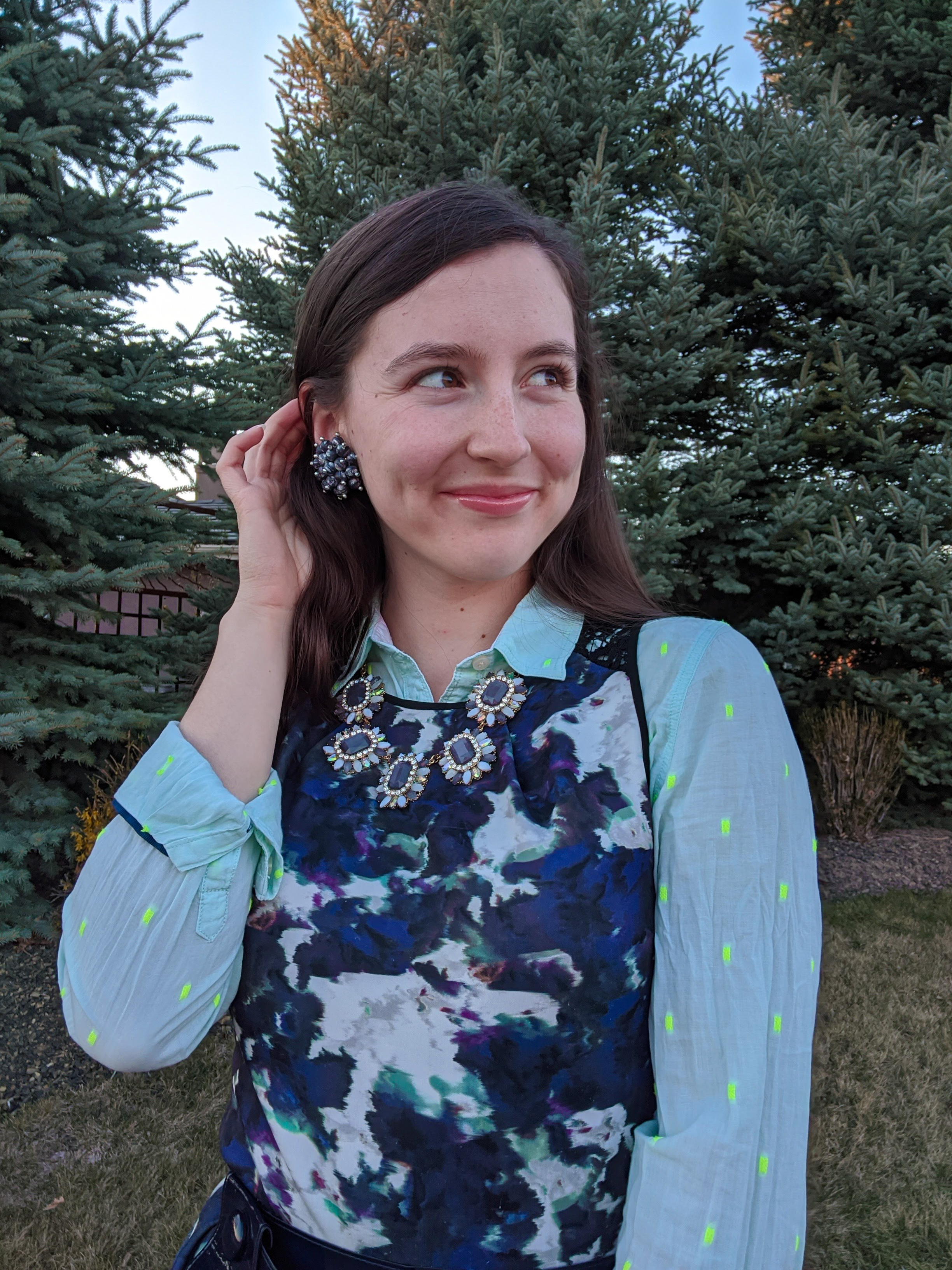 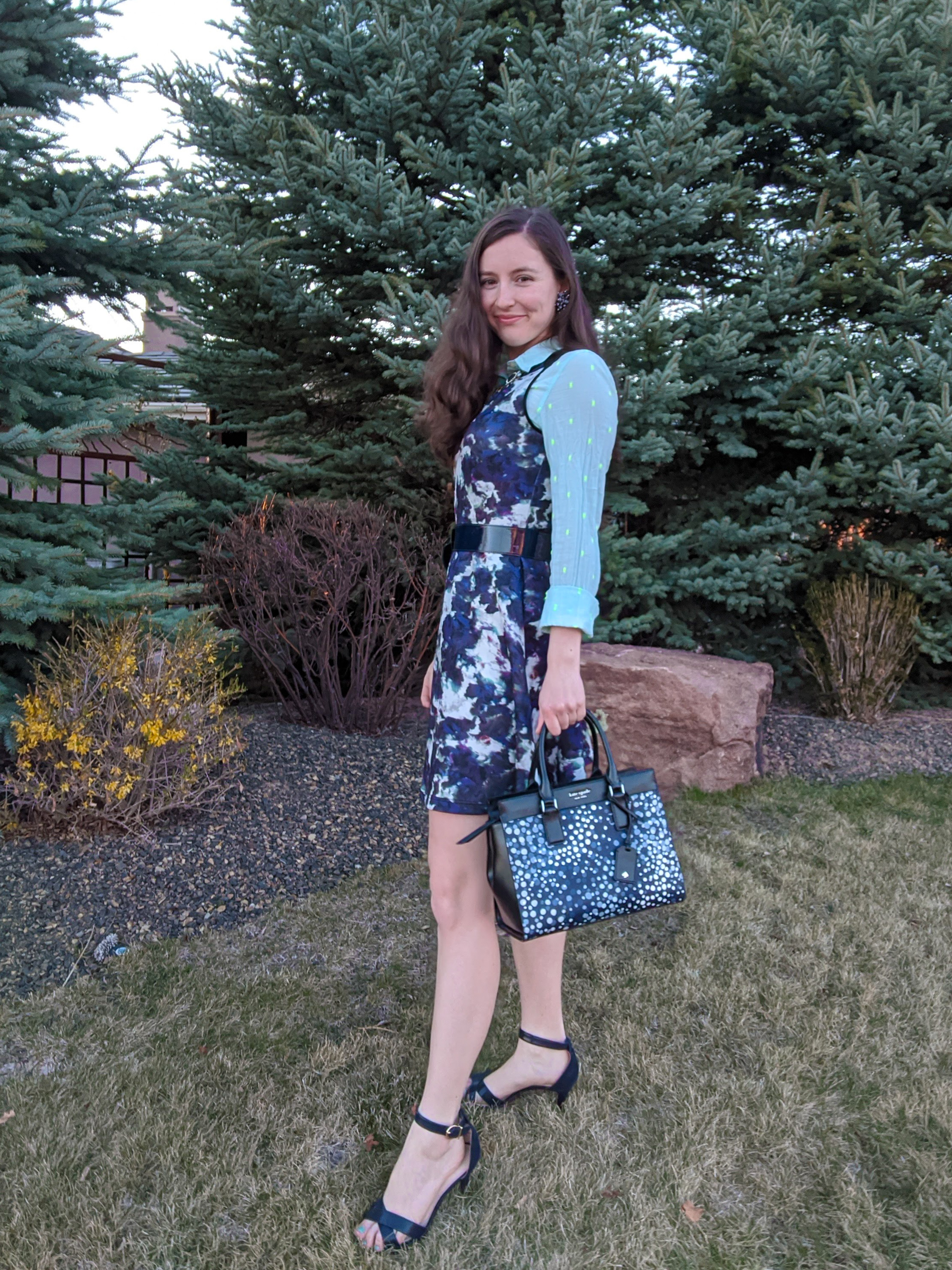 Would you wear this outfit? Minus some of the accessories and the bag, I actually did wear this shirt-dress combo for a work meeting once. You can shop some fun Mindy-inspired pieces in the widget below!

Have you seen “The Mindy Project” before, and if so, what did you think of it? On another note, if you’re also looking for book recommendations, I love Mindy Kaling’s two books, Is Everyone Hanging Out Without Me? and Why Not Me? They’re both absolutely hilarious and would be the perfect reads to get you through this difficult time. 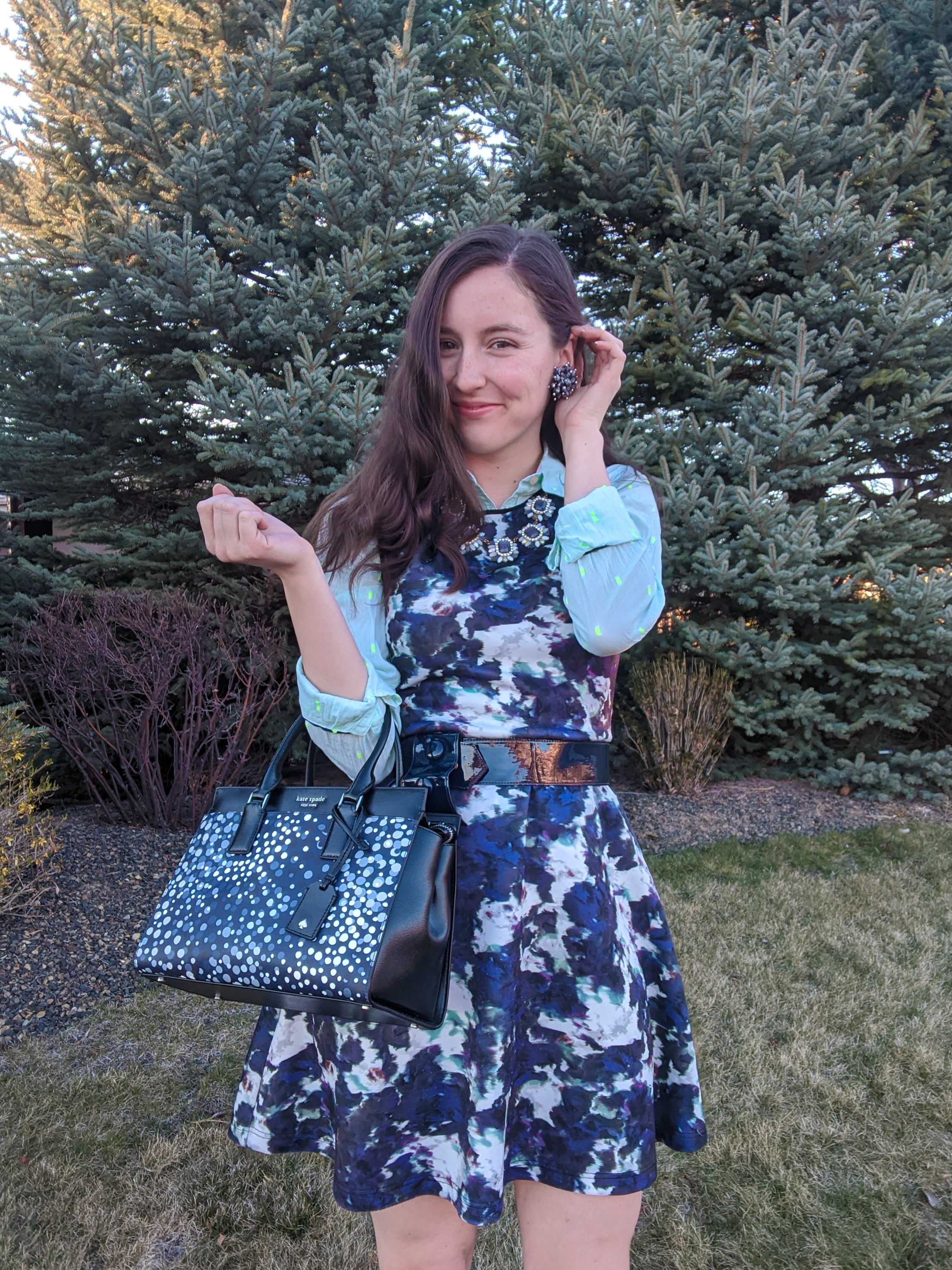 Hope you all are having a great Monday and are as excited about this series as I am! Stayed tuned, as I will be posting for the next four Mondays about more shows and their main characters’ styles.