How I Finally Stopped Picking My Face 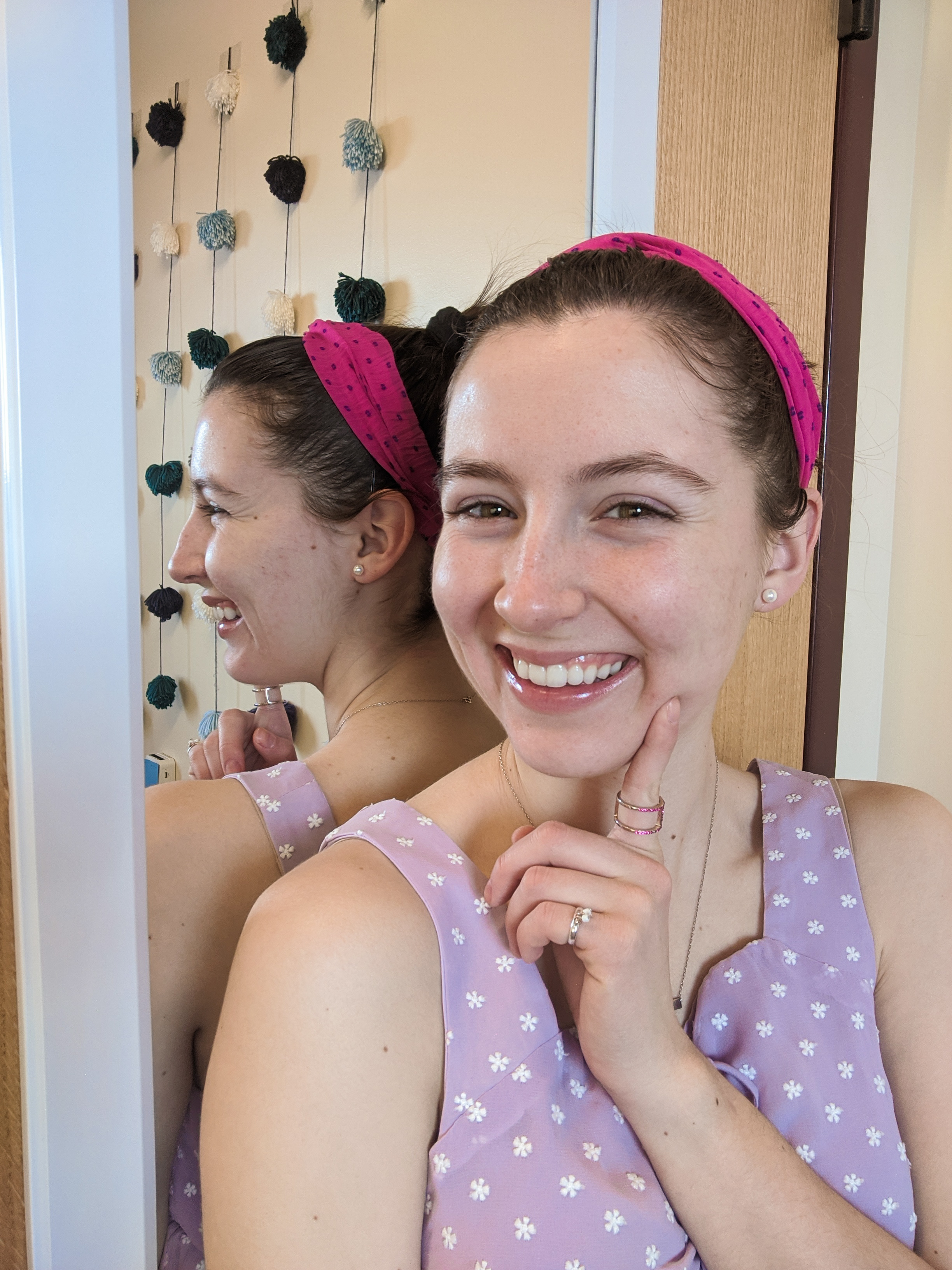 I know, I know, this topic is less than glamorous. Gross, most people would even say. But I decided to write about it anyway because picking my face is something I’ve really struggled with in the past, and I know I can’t be the only one… If I could help just one person stop this horrible habit, then it would be worth sharing this embarrassing thing about myself! So, if you’re like me and find pimple popping extremely satisfying (I hate to admit it), then keep reading to learn the one trick I have implemented that has made all the difference in my complexion. 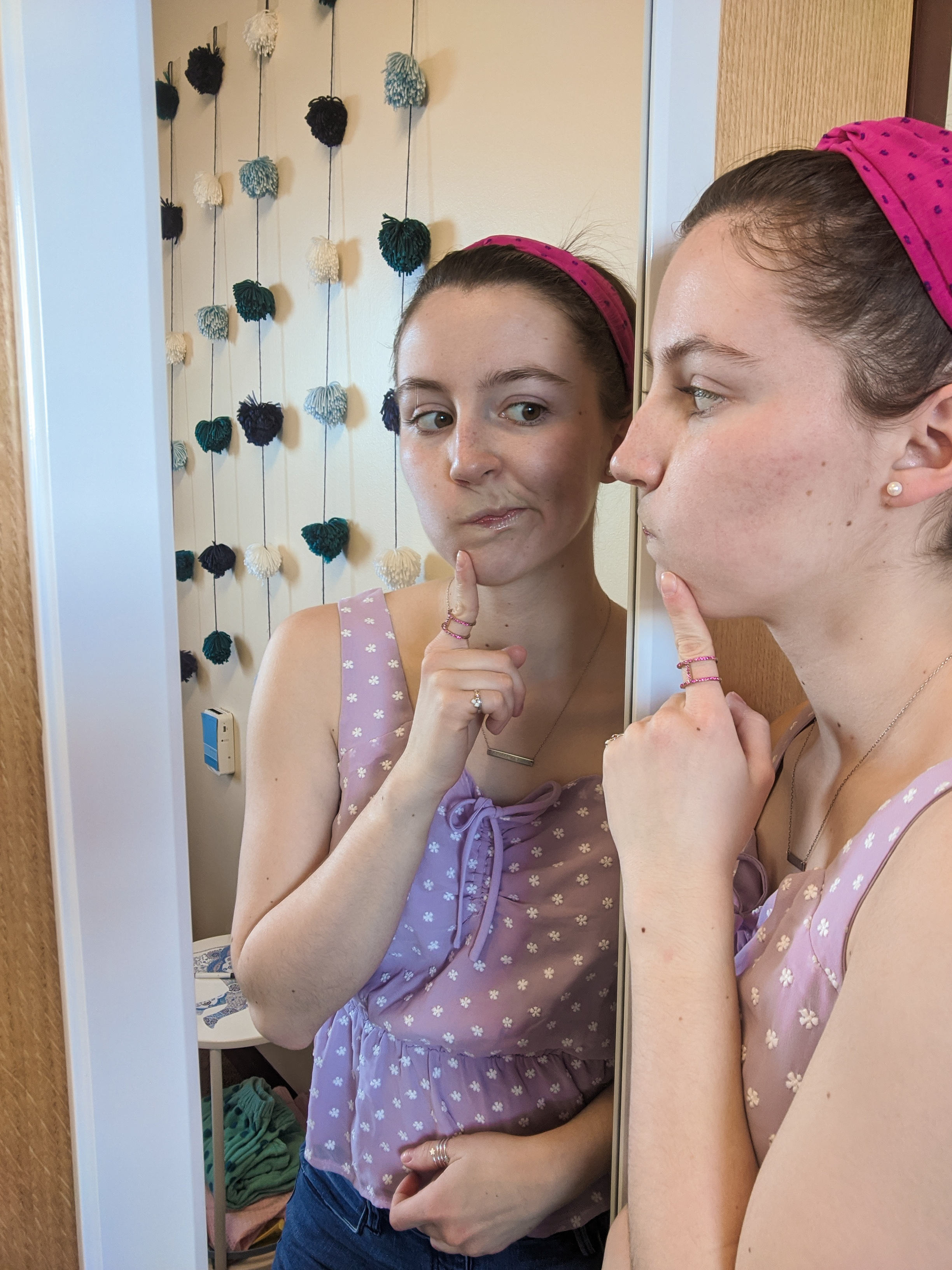 First, some background about my skin. I started routinely washing my face in the fifth grade, before any pimples began developing (fun fact: I used to imagine myself giving informational videos about treating acne as I washed my face, and I perpetually wondered how casually splashing water all over your face, like they do in all the Neutrogena commercials, would get anything off). In middle school, I started using a stronger, acne-specific regimen (from acne.org) that worked really well for me. I used it for several years before deciding to stop, but I never knew for sure whether or not it was the formula that was extremely effective, that I started using it before pimples became a problem, or if I just didn’t really suffer from acne anyway (even though my brothers had). Throughout high school, I had pretty great skin, which is evident in my super old blog posts. Sure, I would get occasional pimples and lots of blackheads (which I would admittedly try to pop), especially during that time of the month, but what I thought was “acne” was never more than some mild breakouts. 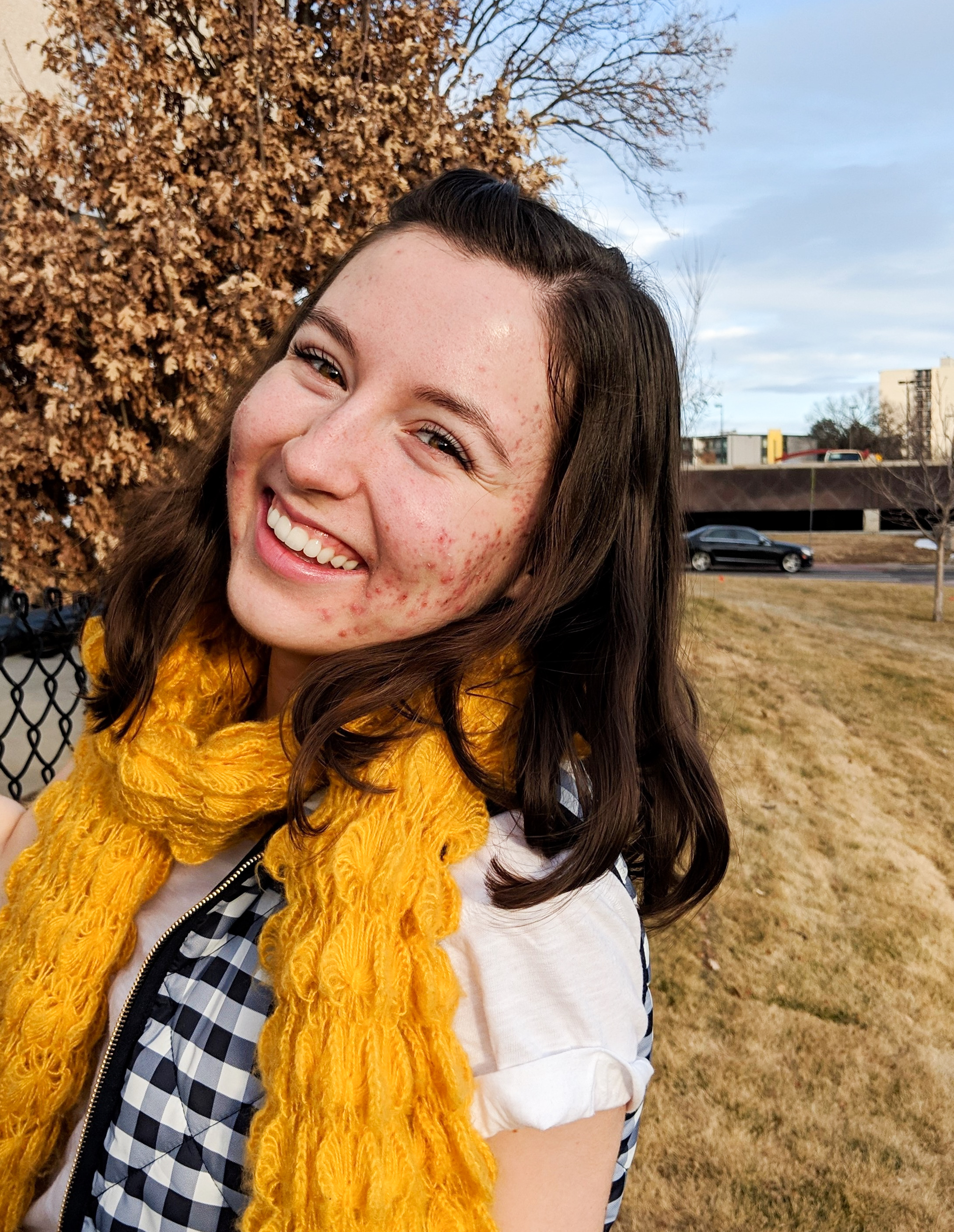 Flash forward to November 2018, my freshman year of college (see above). I finally, and unfortunately, learned what it meant to have real acne (a 19th birthday present to myself, hooray!). My cheeks were constantly covered with pimples and red marks, most of which weren’t even poppable (the “undergrounders”, as my family calls them). I could spend a whole other blog post going into the theories I’ve devised as to why my skin suddenly became so bad, but the point is that I had never had such horrible skin before. I was extremely embarrassed about it and self-conscious all the time. 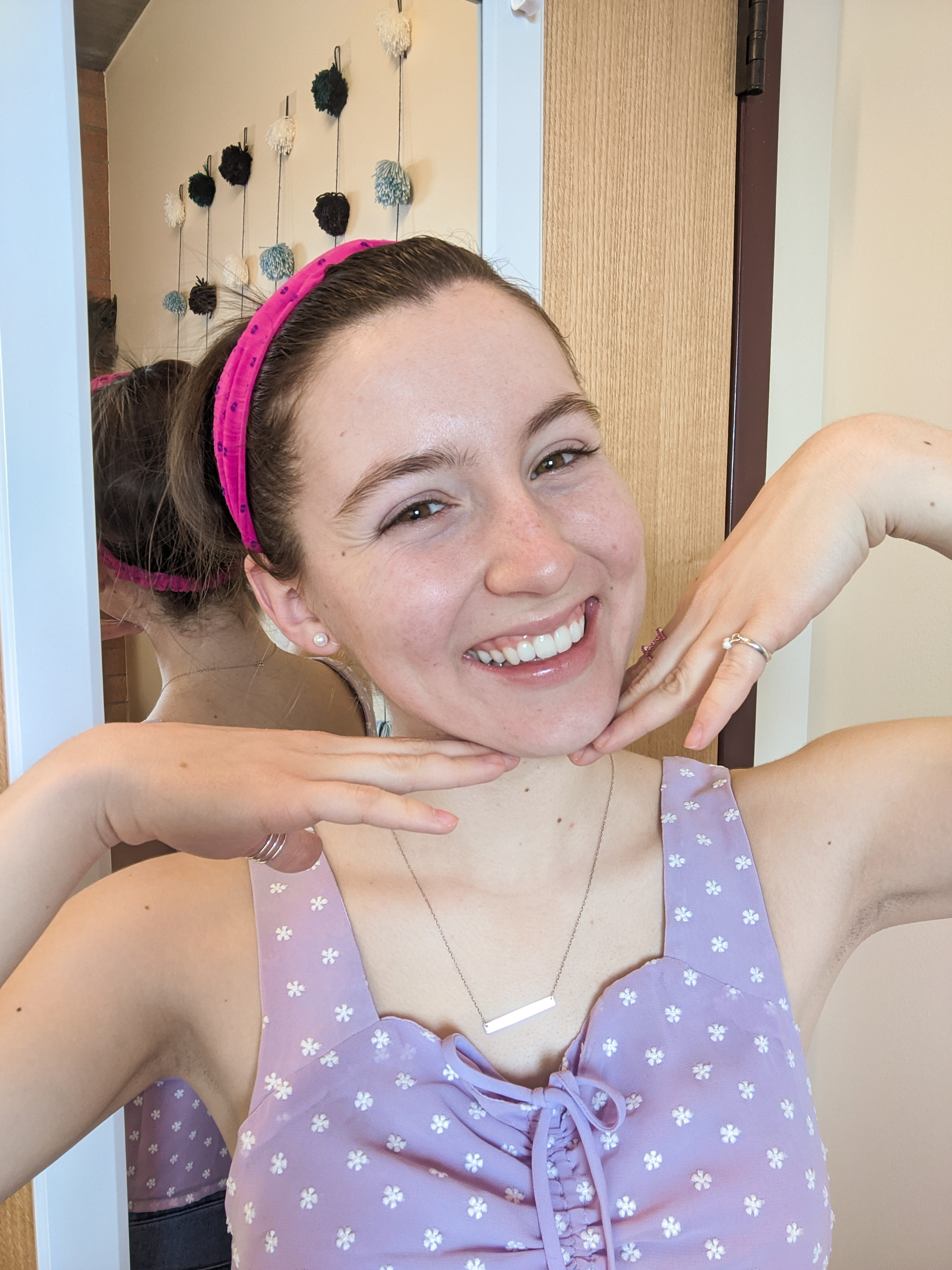 Sometime around May last year, my skin finally started to clear up again (I also have some theories about that). But of course, I still get some gnarly pimples every now and again, and it is so difficult for me not to pop them with my fingers. Extremely difficult! So, how then have I managed to keep my skin so clear and refrain from giving into the ever-present popping temptation? 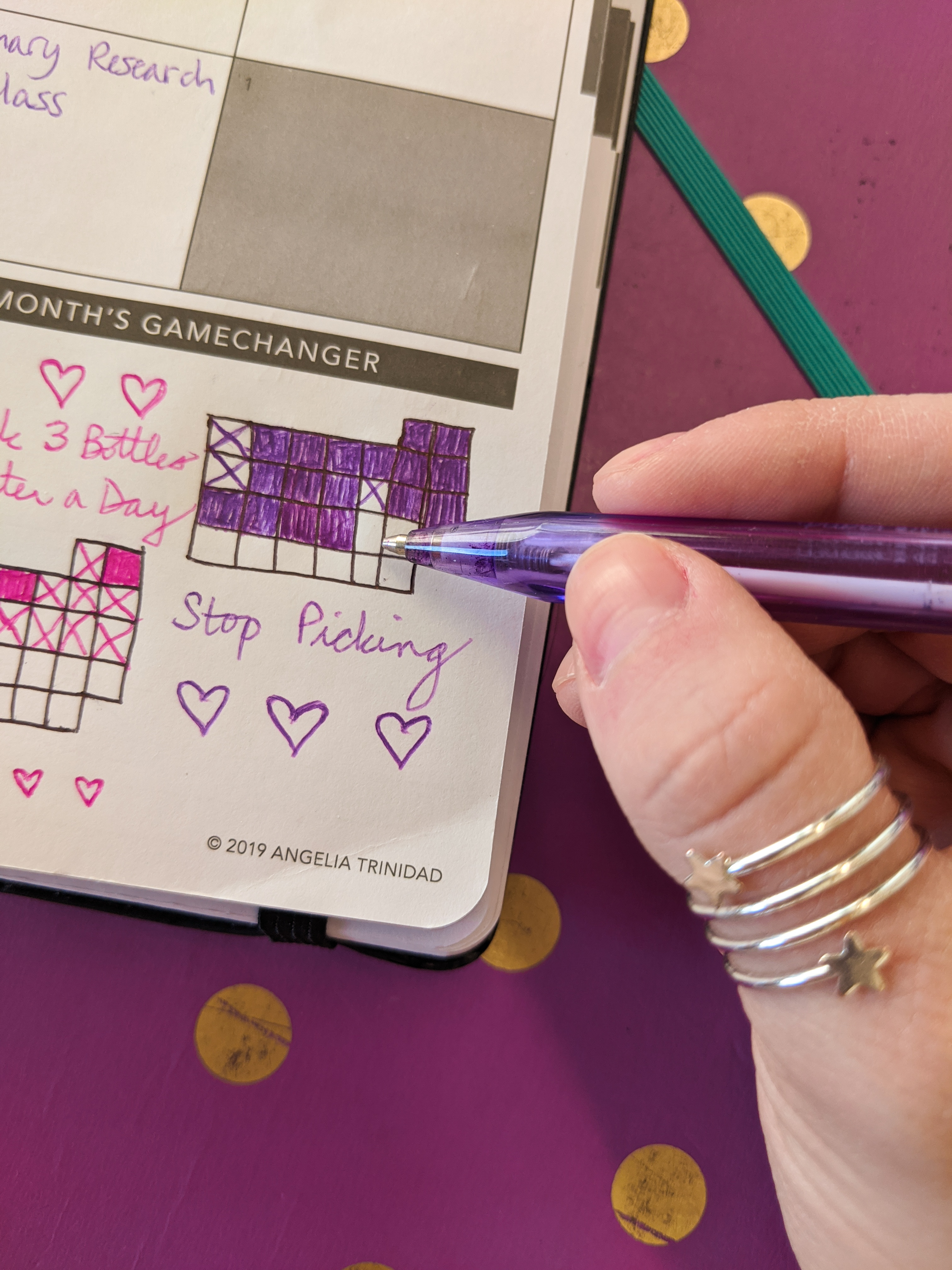 A habit tracker. I had never heard of a habit tracker before I saw my suitemate making one (probably because I don’t keep up with the latest and greatest in the bullet journaling world), but it has been a lifesaver to me. A habit tracker is exactly what it sounds like: a calendar or other list-like tool to mark which days you adhere to a habit you want to form (or in my case, break). As you can see in the picture above, I set mine up each month on the monthly layout of my planner, making sure the days/weeks align accordingly. Whenever I refrain from picking my face, I get to color in that day’s box. But whenever I fail, I have to put an X in the box. As the picture above shows, I’ve picked my face three times so far in the month of February. 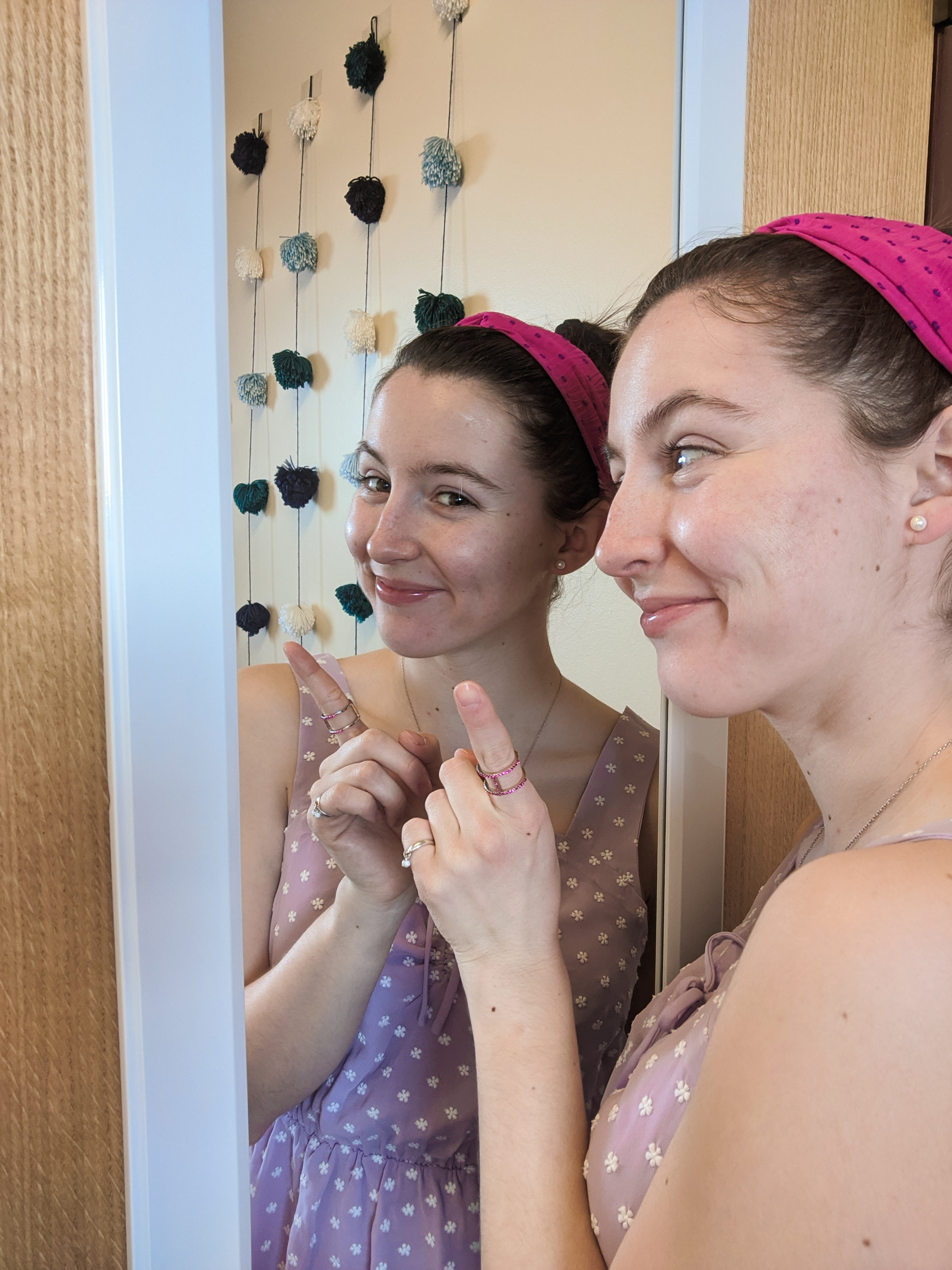 In a way, the habit tracker shames me into avoiding picking my face. Tough love? You could say that, but it’s a tough love I need. By picking my face constantly, I was scarring my skin and leaving lasting marks. Even though I knew this and hated myself for picking, I could never seem to stop… until now. I first started adding a habit tracker to the monthly layouts in my planner back in the fall of last year (October, to be exact), and since then I have been working to make every day’s box filled in. By mid-December, I had gone 30-some days without picking, which was incredible and hard to believe (it reminds me of those big signs in factories, like in Monsters, Inc., that say “37 Days Since the Last Incident”). During that streak, I got a huge white pimple on my face that I had avoided popping for a day already, and I knew if I waited just one or two days more the blemish would go away on its own… But it tested me every time I went to the bathroom or passed a mirror. Eventually, that night, I finally gave in and popped it. I then started to cry, having broken my long streak, and then I picked my face even more. As upset and dejected as I felt after that night, it was a very important lesson for me.

Not only did I feel horrible about reverting back to my old ways (and having to put a big ugly X in the box on my habit tracker), but I realized in the days after “the incident” that my face broke out even more—the worst it had in awhile. It shouldn’t have been surprising to me that picking my face (and thereby rubbing my oily hands all over my pores) would lead to more pimples. But for whatever reason, that experience helped me realize how important it was for me to not touch my face if I wanted to avoid making even more blemishes. 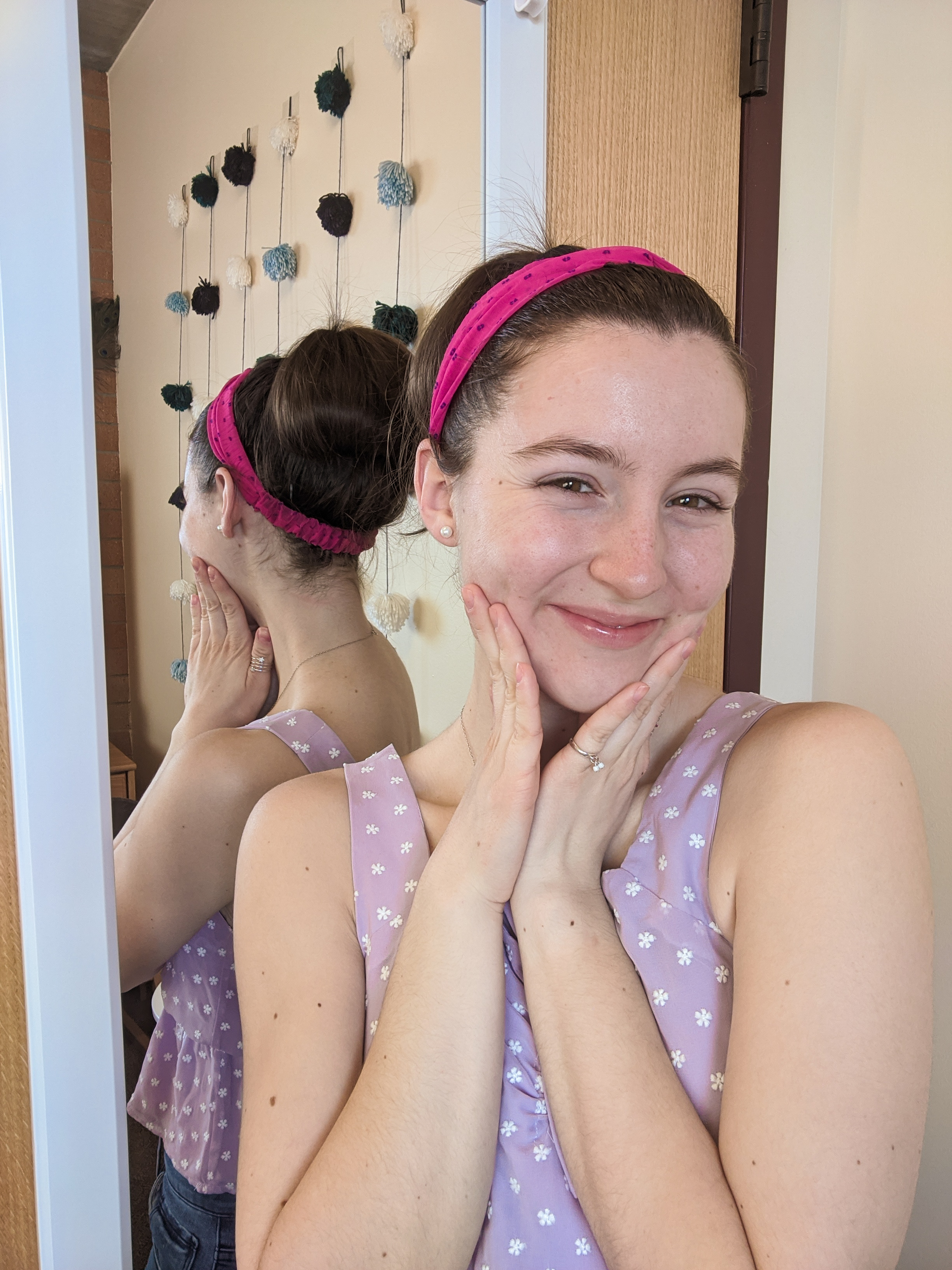 I realize the idea of a habit tracker won’t work for everyone who is trying to stop picking. But for me, the combination of my obsessive personality, the need to “keep the streak alive”, and the internal disappointment associated with missing a day really pushes me to be better about taking care of my skin. And now look how far I’ve come! I sometimes do a little happy dance when I realize how good my face looks and how little I’ve picked it. Sure, I still relapse every now and again (especially this month, due to lots of stress), but the habit tracker holds me accountable and allows me to celebrate my accomplishments when I’ve been good. 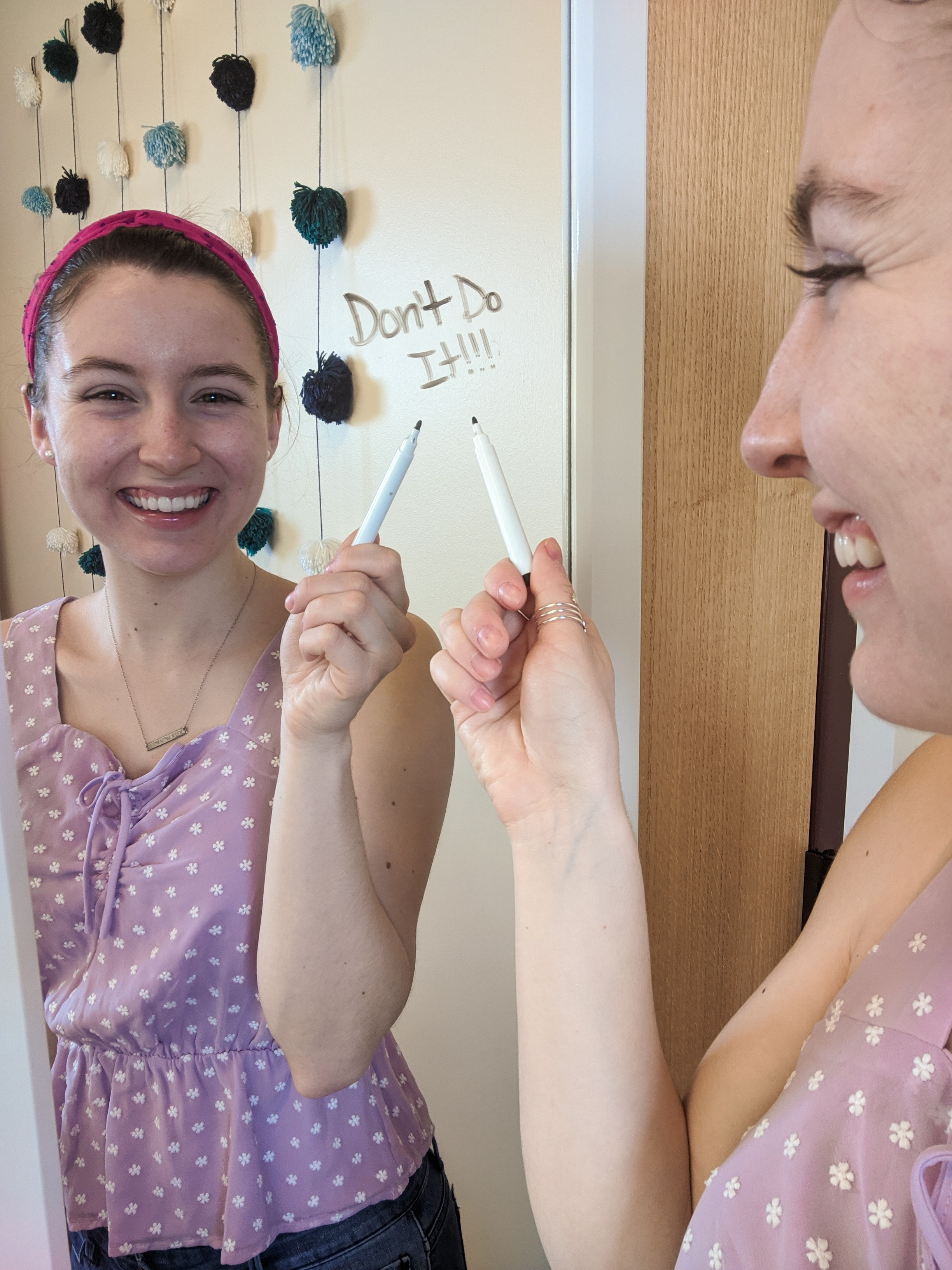 So what about you? Have you ever struggled with this issue? I’ve opened up to my boyfriend about this (attractive, I know) and he’s just not a picker. Not ever! I couldn’t believe this when I first found out! I can’t imagine not having the urge to pick all the time, but I’m sure it’s an amazing feeling. On a less gross note, I actually had a lot of fun taking photos for this post because I spent a lot of time playing around with the mirror and the angles. Any picker knows that getting close to a mirror can be a dangerous game… But I resisted, and I enjoyed seeing how different locations around the mirror affected my pose and reflection.

Anyway, while this post was probably irrelevant to a lot of you, I hope it was helpful to someone out there. If you struggle with this, I feel you! I hope you all have a fantastic Monday and have a great start to your week.

10 comments on “How I Finally Stopped Picking My Face”