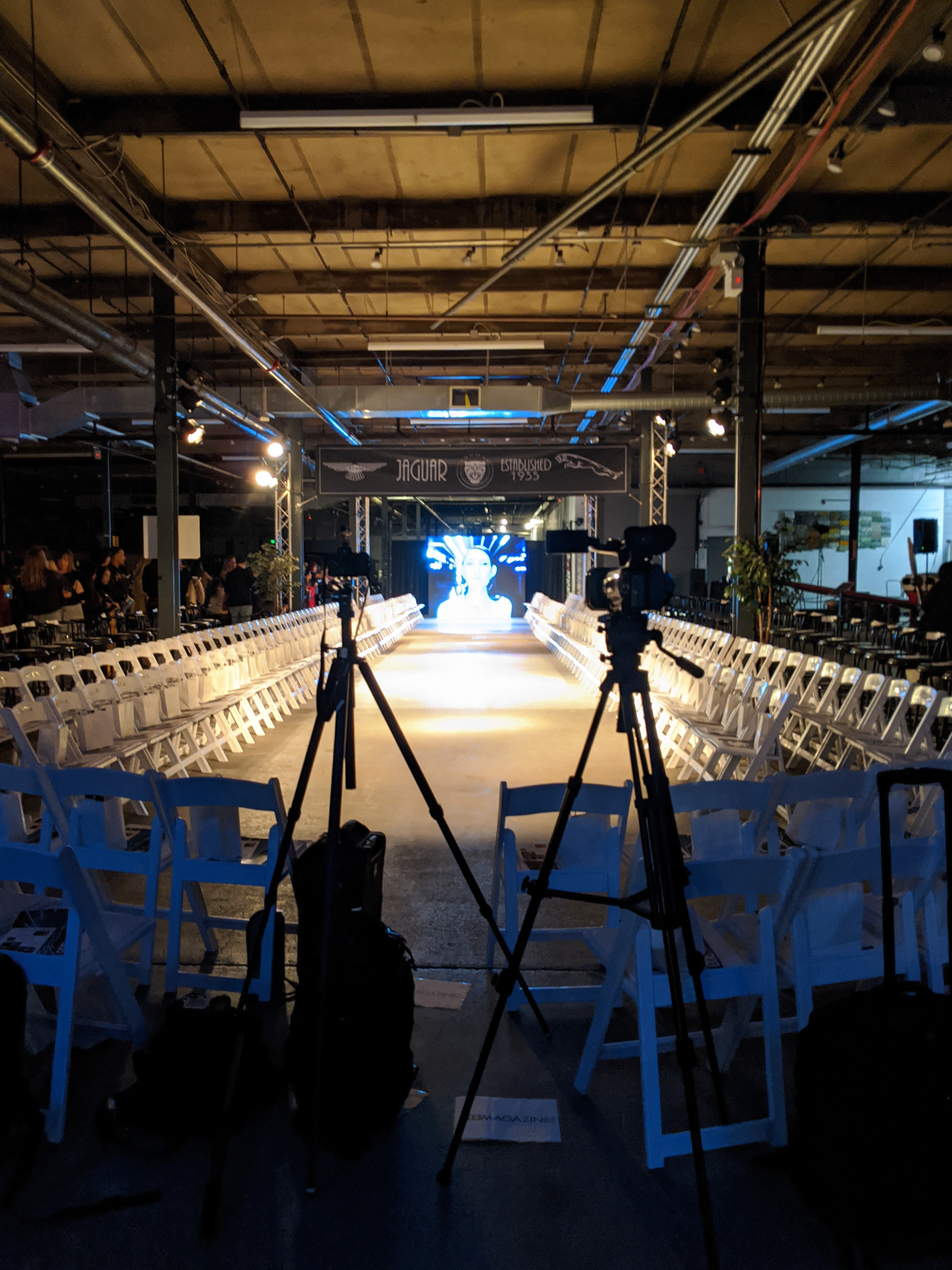 This past weekend, my parents surprised me with tickets to my first ever fashion show! Attending New York Fashion Week is on my bucket list and I’ve been itching to attend any show for years (after my stint of binging Project Runway, naturally), so I was extremely excited to finally get the chance to attend one. So what was it like?? Well, let me tell you, it was pretty much exactly what I expected from a fashion show… 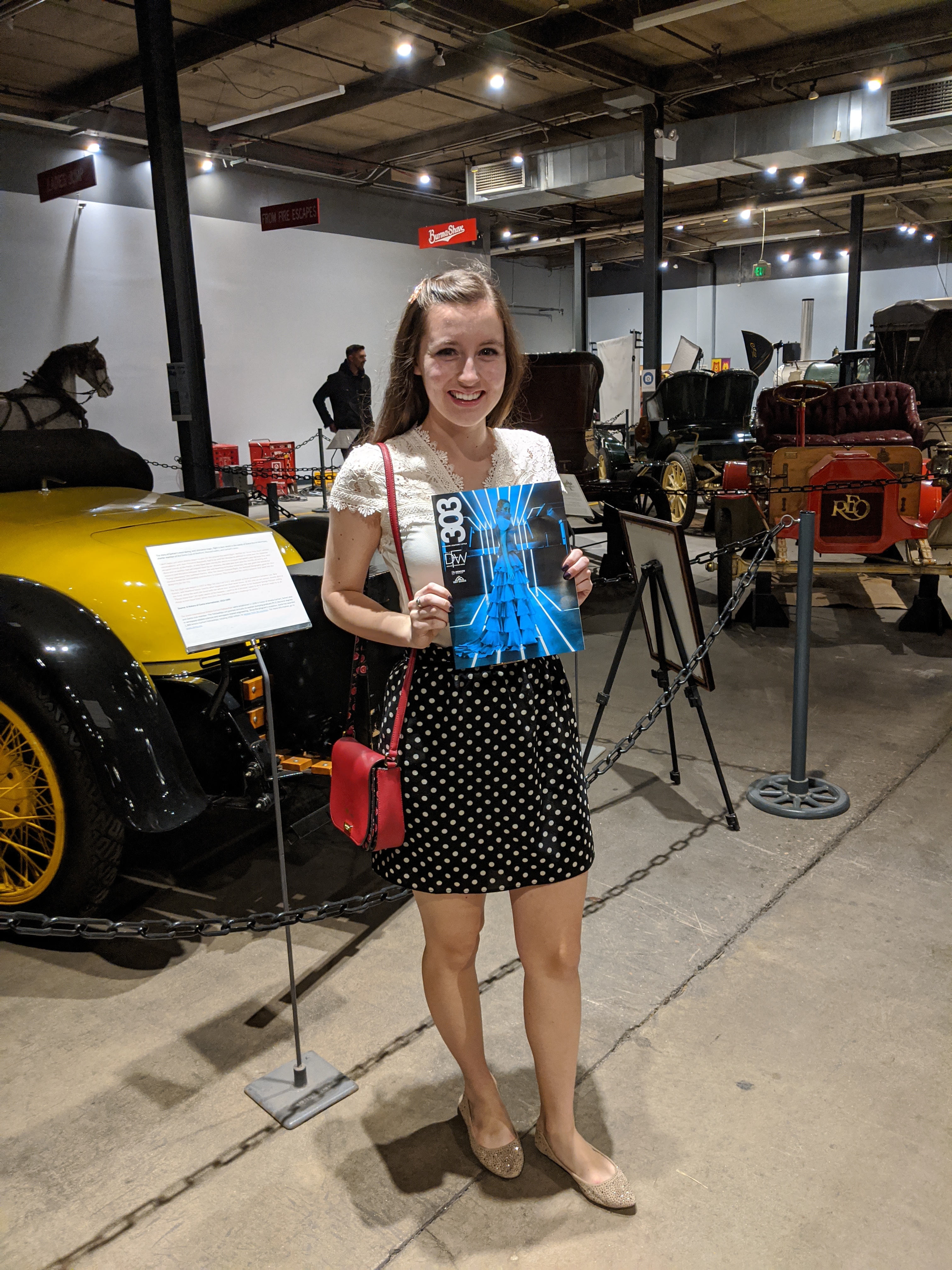 We attended the first night of Denver Fashion Week, the Art x Fashion show where local emerging artists collaborated with Denver Fashion Week designers. The show was held at the Forney Museum of Transportation, which seemed like a strange place for the event, in my opinion. Our tickets told us that the “Red Carpet Reception” began at 7pm and doors closed at 8:30pm, but there was no mention of when the actual show began. We arrived at the museum at 7:15.

After showing the hostess our tickets, the three of us had the opportunity to take a free photo on the red carpet, with a backdrop behind us that listed all the sponsors of the event (just like the real movie stars, I know!). Afterwards, we spent about 20 minutes exploring the museum itself. There were lots of very cool old cars, as expected, as well as a train and a few airplanes. There was also some vintage clothing in glass cases, and I saw the most fabulous beaded flapper girl dress. I wish I could have worn that! 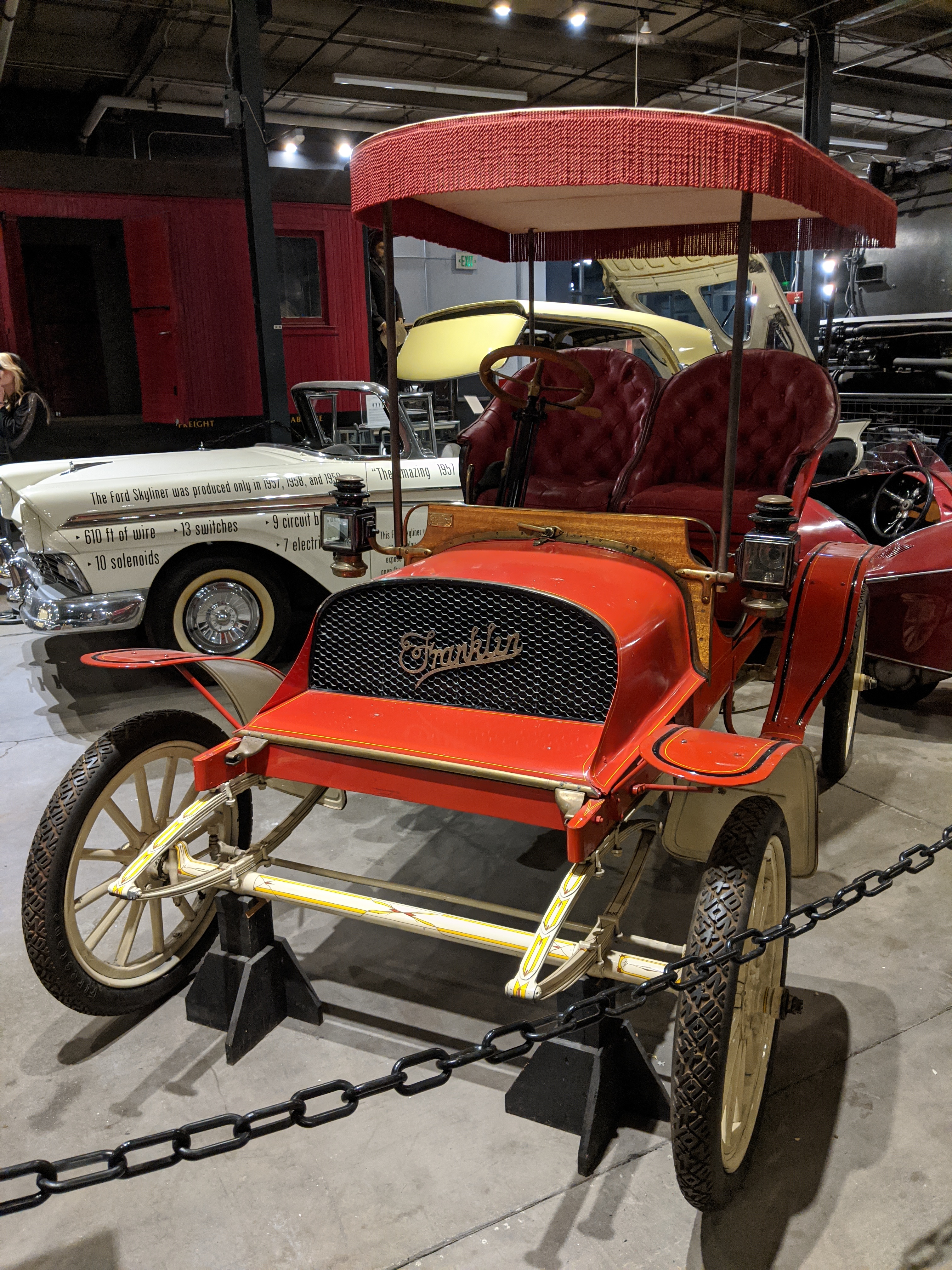 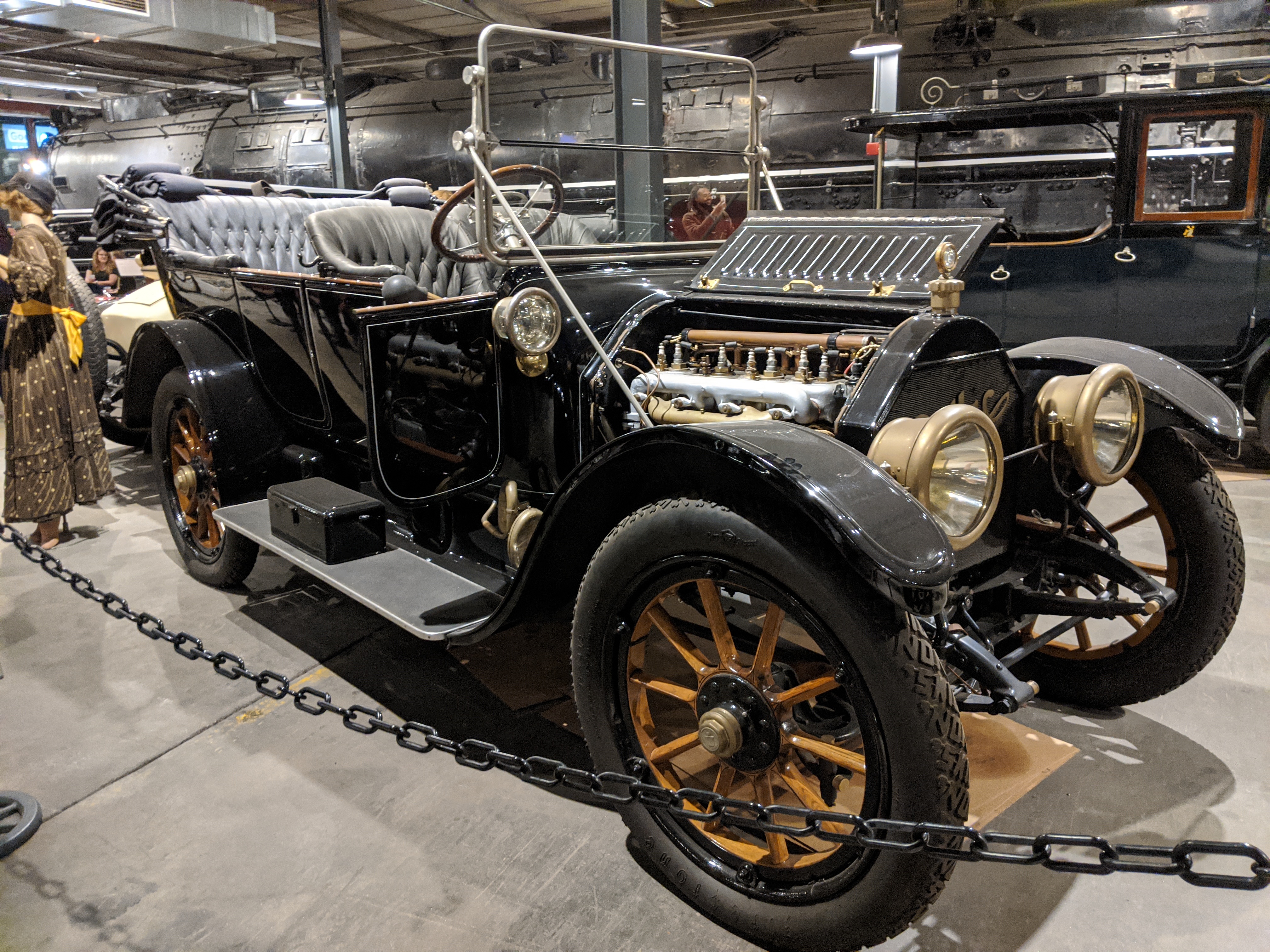 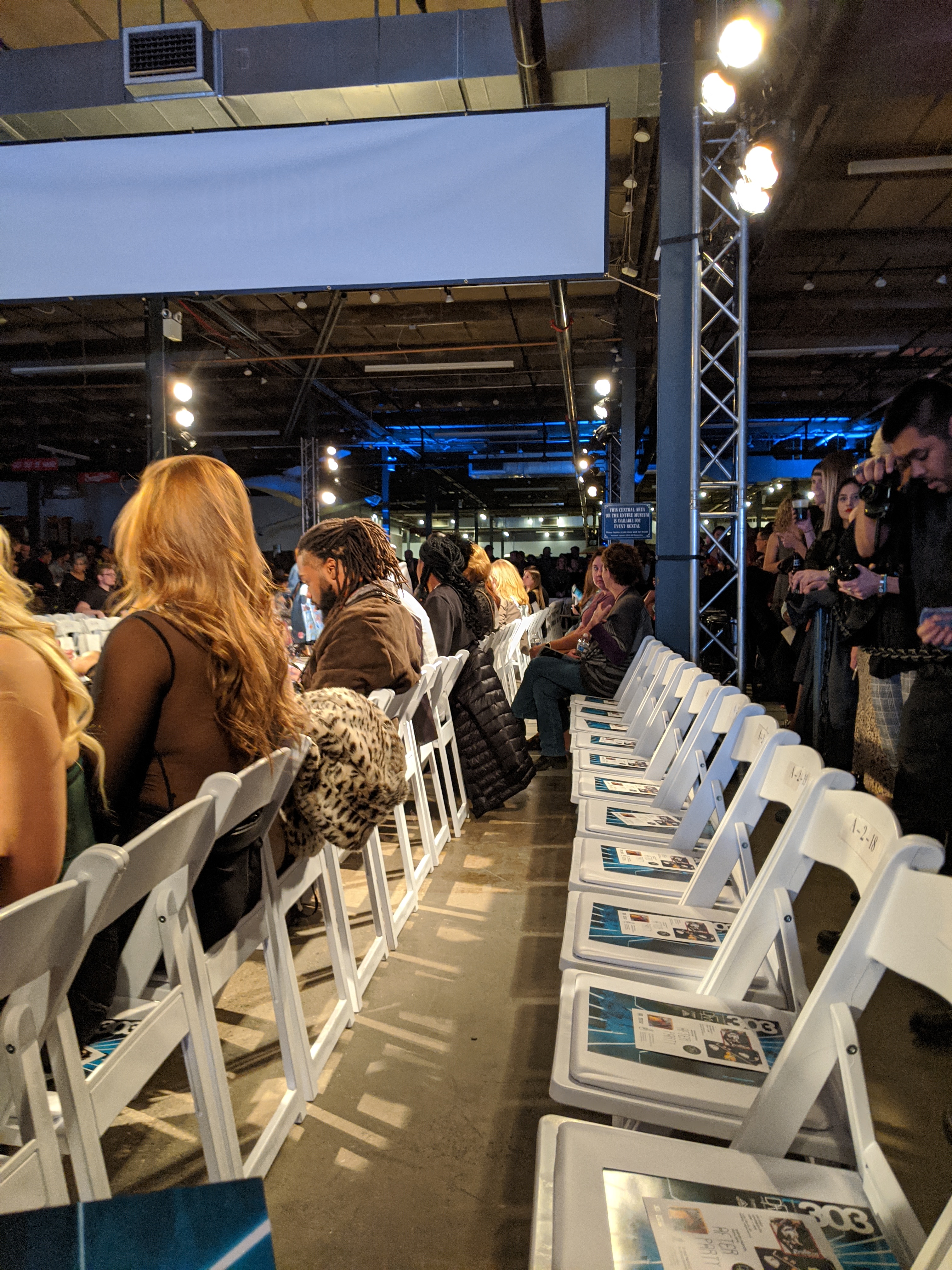 At the far end of the warehouse was the open space where the fashion show itself was set up. The entire room was very dark, except for the lights shining on the white catwalk. Two rows of chairs lined the walkway with a few stools behind that, but the rest of the space was standing room only. There were a few catered hors d oeuvres (we had already eaten though) as well as a drink bar. Other than that, there was nothing left to explore. So we started waiting…

Had we known there was nothing else to do, we would have arrived much closer to 8:30 when the doors to the event closed. Instead, we stood around for nearly two hours, just staring at each other. You can imagine that we were all getting a little agitated by the end. 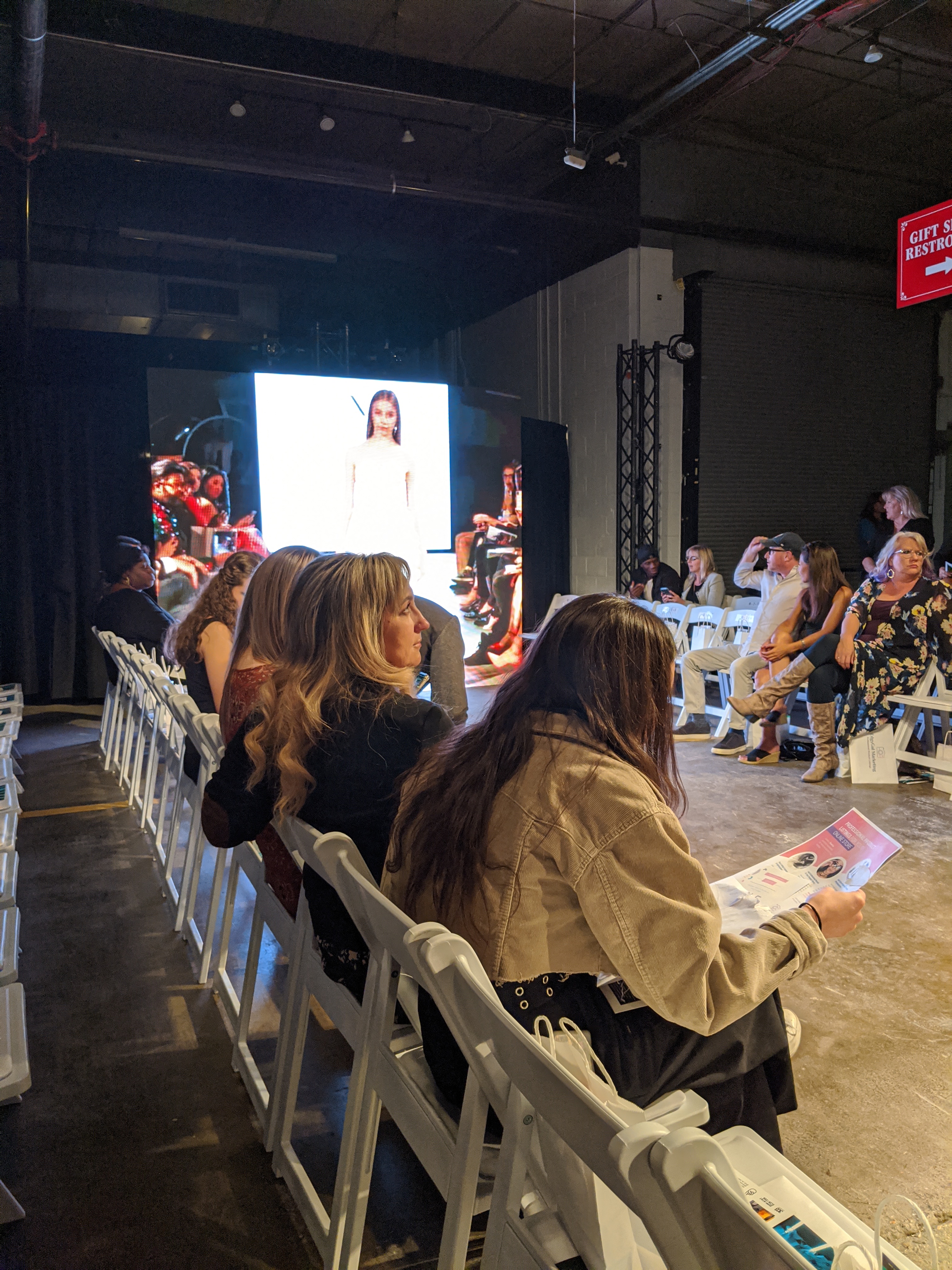 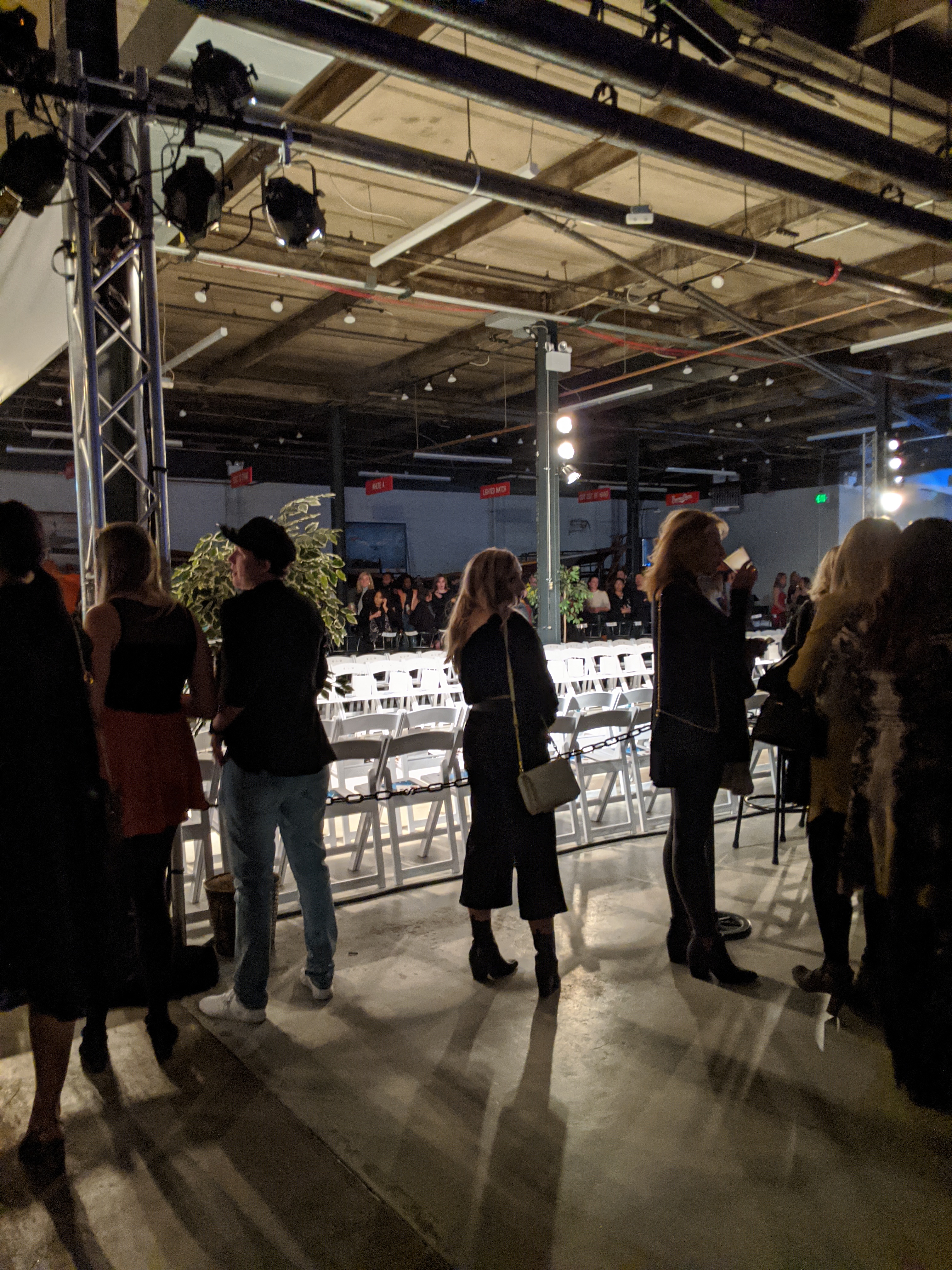 However, the people-watching was pure gold. As I expected, the attendees of the show were generally an extravagant group of people. Some outrageous outfits and makeup, very strange conversations… But hey, where else would one do that kinda stuff but at a fashion show? As the night of standing went on, more and more people started to awkwardly dance by themselves. I can’t say it was good dancing, but it was entertaining nonetheless. It was also evident that the alcohol had been kicking in.

In addition to the people, the clothes I saw were fabulous. Everyone’s fashion was extremely on point, as you would imagine, and there was a very eclectic mix of styles. I can’t say I would wear all of the different outfits I saw, but I appreciated their looks nonetheless. One of my favorite trends I spotted were white booties, and there were quite a few jumpsuits as well.

Had I known I would be attending a fashion show that night, I would have worn something more “high-end” and edgy. But I still felt my girly polka dot and lace outfit brought a feminine mix to the table (or should I say, catwalk). 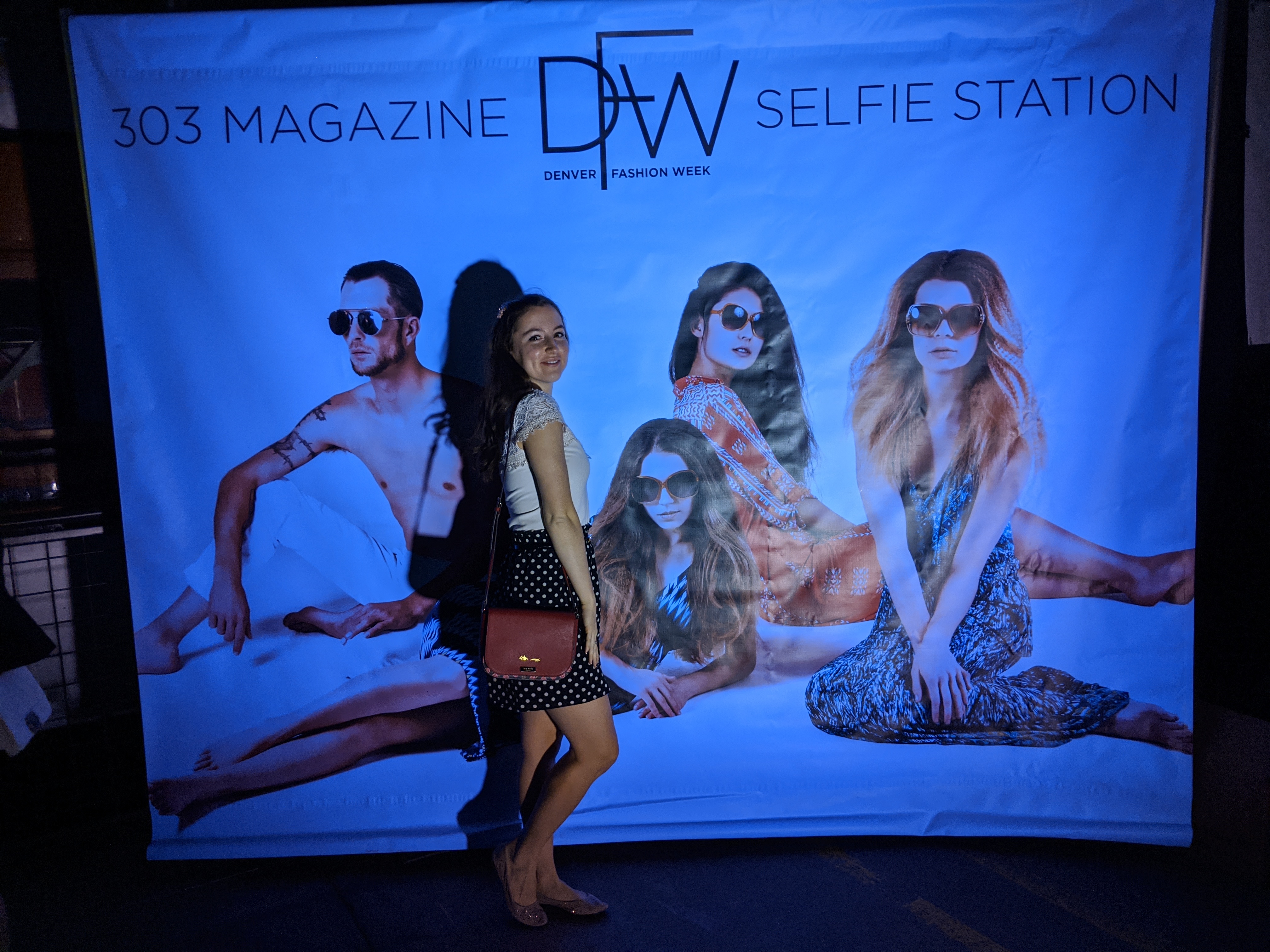 Our tickets included seats in the second row, and around 9pm, we were finally allowed to sit down (thank goodness). I was so glad we weren’t in the front row because I feared doing something clumsy and accidentally tripping a model as she walked by, ha! Trying to get to our seats was a complete hassle, as the system lacked all organization. The three of us were jumbled into a line and my mom found her seat first. I lagged behind, but in order to get to my seat on the other side of the runway, I had to walk down the catwalk in front of everyone. So, of course, I WORKED IT. I strutted down that runway with as much sass as I could muster—then I paused, looked over the shoulder—continued walking while swinging my hips out. I glanced over at my mom, who was laughing and pretending like she didn’t know me. Honestly though, that walk was the best part of my night! It was SO much fun to own the catwalk!

Once the three of us finally sat down, our moods instantly improved. We waited until about 9:15 for the show to finally start. There were six different collections that came down the runway, all with unique music, fashion, styling (hair and makeup), and overall ambiance of the presentation. Each collection was also, not surprisingly, extremely weird. You can check out all the pics I snapped during the show (even though the quality isn’t the best)!

My parents and I chitchatted throughout the entire show. First we discussed how all the fashion was completely unwearable for any normal human being. I never understood this dichotomy between the extravagance of high fashion and the practicality of real fashion people buy in stores. I always thought that NYFW and the other fashion weeks were designed to set the trends for colors, fabrics, and silhouettes for the upcoming season, even if the actual pieces themselves were completely outrageous. But maybe I’m wrong? Why not just show pieces that normal people can wear and that will appear in stores? 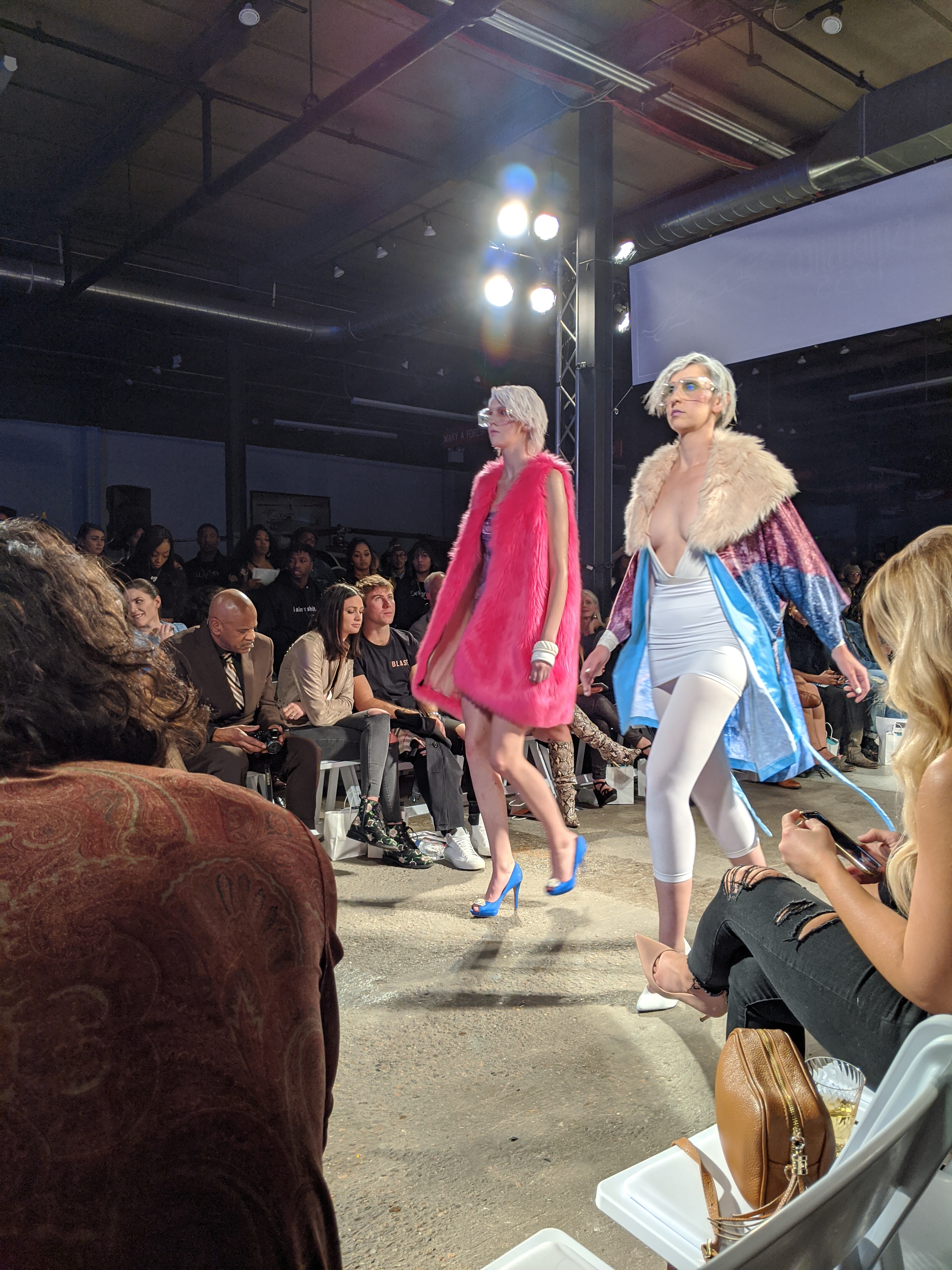 We also discussed the models. Why do they act like automatons, never smiling or making eye contact with the audience? They don’t look like they’re enjoying themselves at all. We found it very difficult not to giggle constantly, looking at the models’ straight faces and how uncomfortable they must be in their crazy outfits and high heels. One model’s shoe popped off and she very nervously had to walk the entire catwalk, trying to hide her uneven gait, her half-off high heel, and her fear of tripping. Another female model carried an open umbrella. As she was returning down the catwalk, a male model was walking up it, and the umbrella collided with his arm (very subtly). For a split second, the female model broke her serious expression as a look of fear and wide eyes flashed across her face. Then she returned to her soulless gaze. 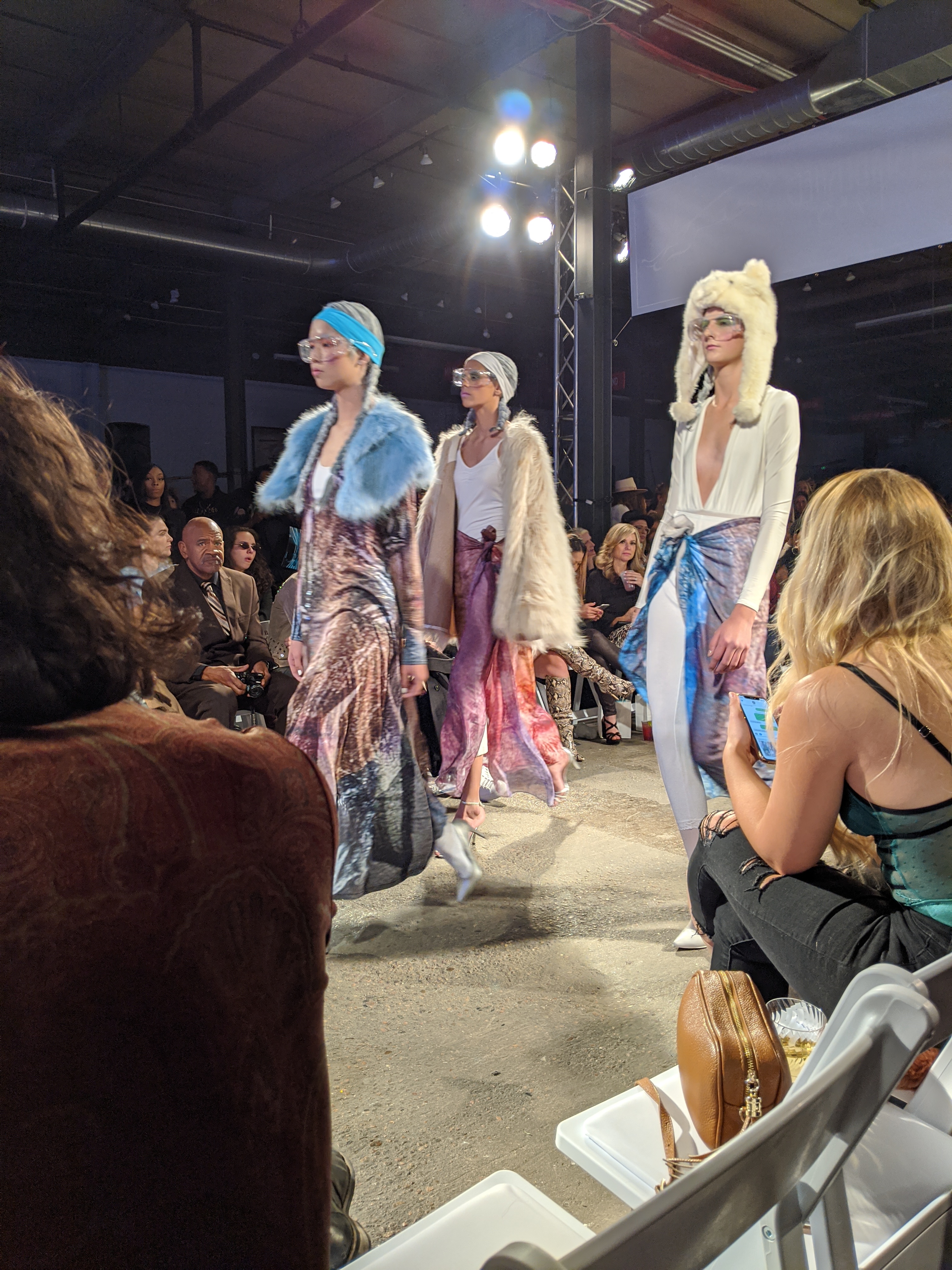 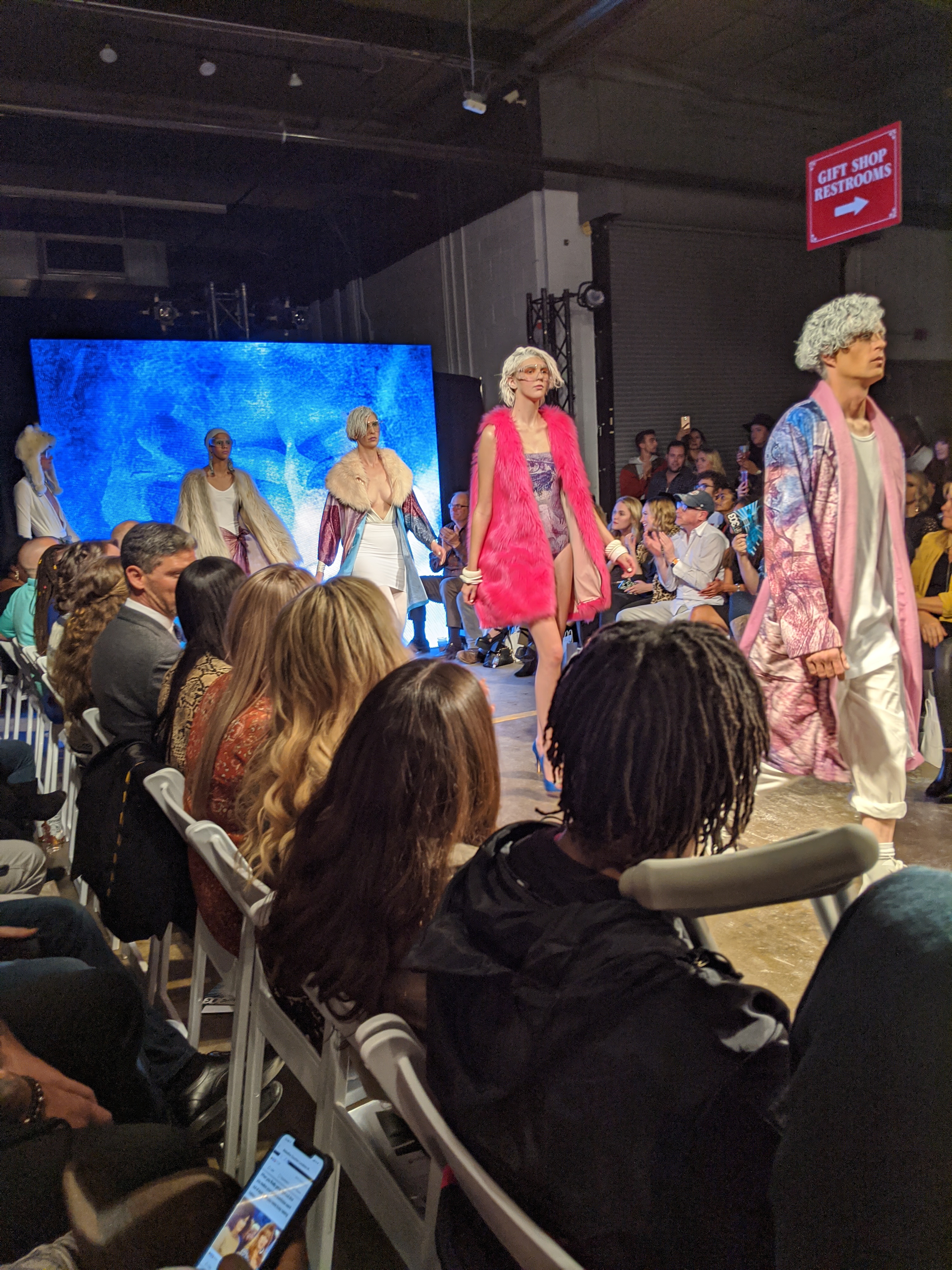 So no, I don’t think there was really anything in the six collections that I would actually wear on a regular basis—or ever. But that didn’t mean it wasn’t still entertaining or interesting to see all of the looks. There were a few pieces I thought were really cool, just not practical or realistic. 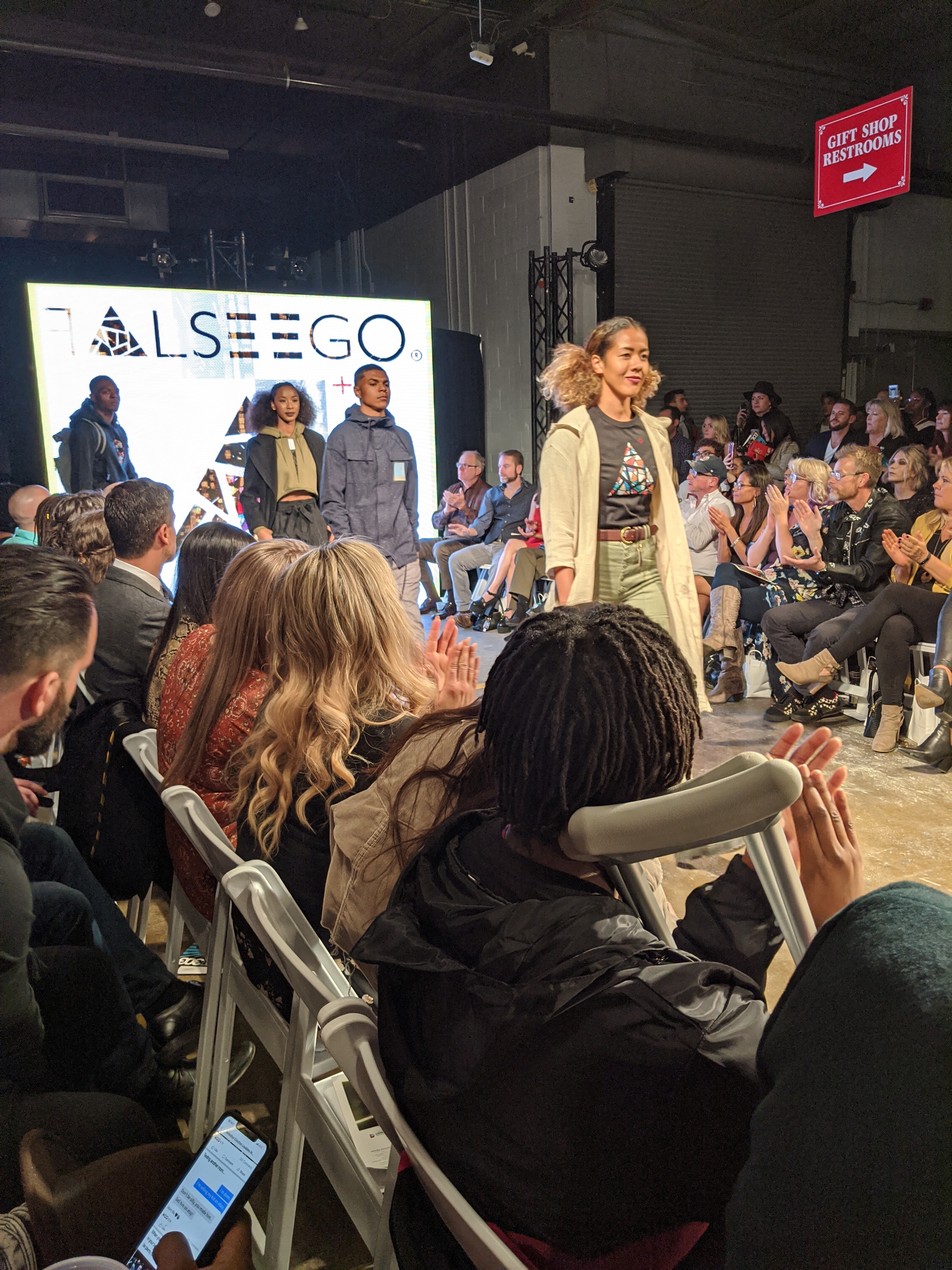 Like I said, the fashion show was what I expected—unorganized, weird clothes I would never wear, an interesting crowd of people with whom we didn’t fit in, and a ton of fun. Despite everything, I had an absolutely great time and am so grateful for the opportunity to have attended. It was such a special surprise! I’m sure if we talked to “real fashion people” they would tell us that we “just don’t understand fashion.” Honestly, it’s true. I don’t. I prefer things I can actually wear, whereas the world of fashion shows seems to be about who makes the weirdest stuff. But hey, that’s okay! Just different perspectives. 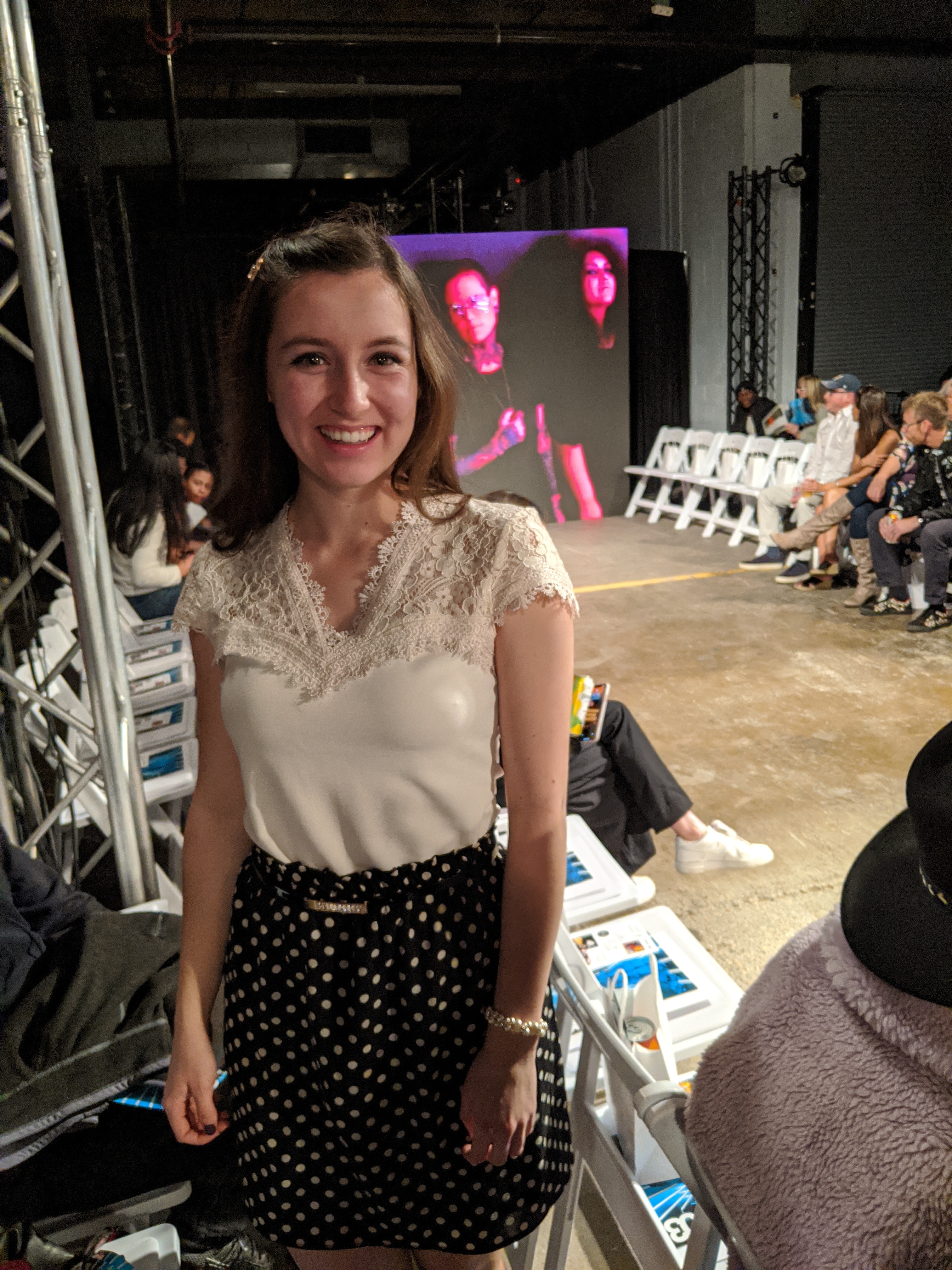 Bottom line is, we all decided we wouldn’t pay that same amount (it was rather expensive) to attend a fashion show again. BUT it was a very fun, very unique experience, and we were all glad to have done it. I would definitely attend another if it were more affordable!

Have you ever been to a fashion show? What were your thoughts?? I’d absolutely love to know! And how do you feel about the fact that fashion from the runway often doesn’t translate to fashion in the real world?

Have a great weekend, gals!

6 comments on “What a Fashion Show is Really Like”