The Funniest Story of My Life 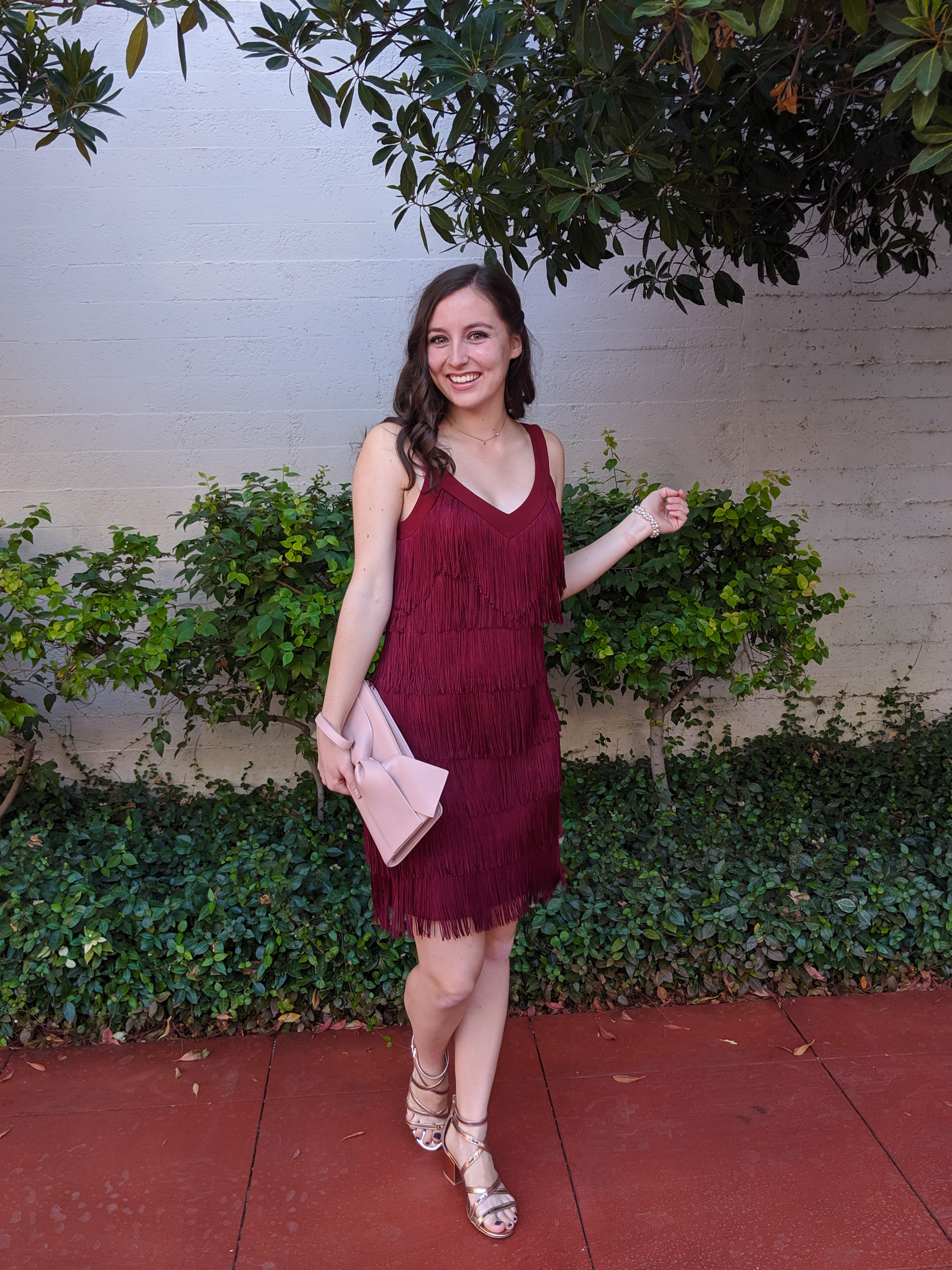 After attending my final wedding for 2019 two weekends ago *sheds silent tear*, I have completely run out of ideas for wedding-related blog content. (If you missed it, you can see my summer wedding outfit from the first round of nuptials in June and read about the fun wedding bingo I played at the second wedding in August.) So instead of sticking with the theme of weddings, I decided to go with the theme of this dress instead and share perhaps the funniest story of my whole life: A night that involved 2 girls, 1 fringe dress, and a cheesecake dream. It goes a little something like this… 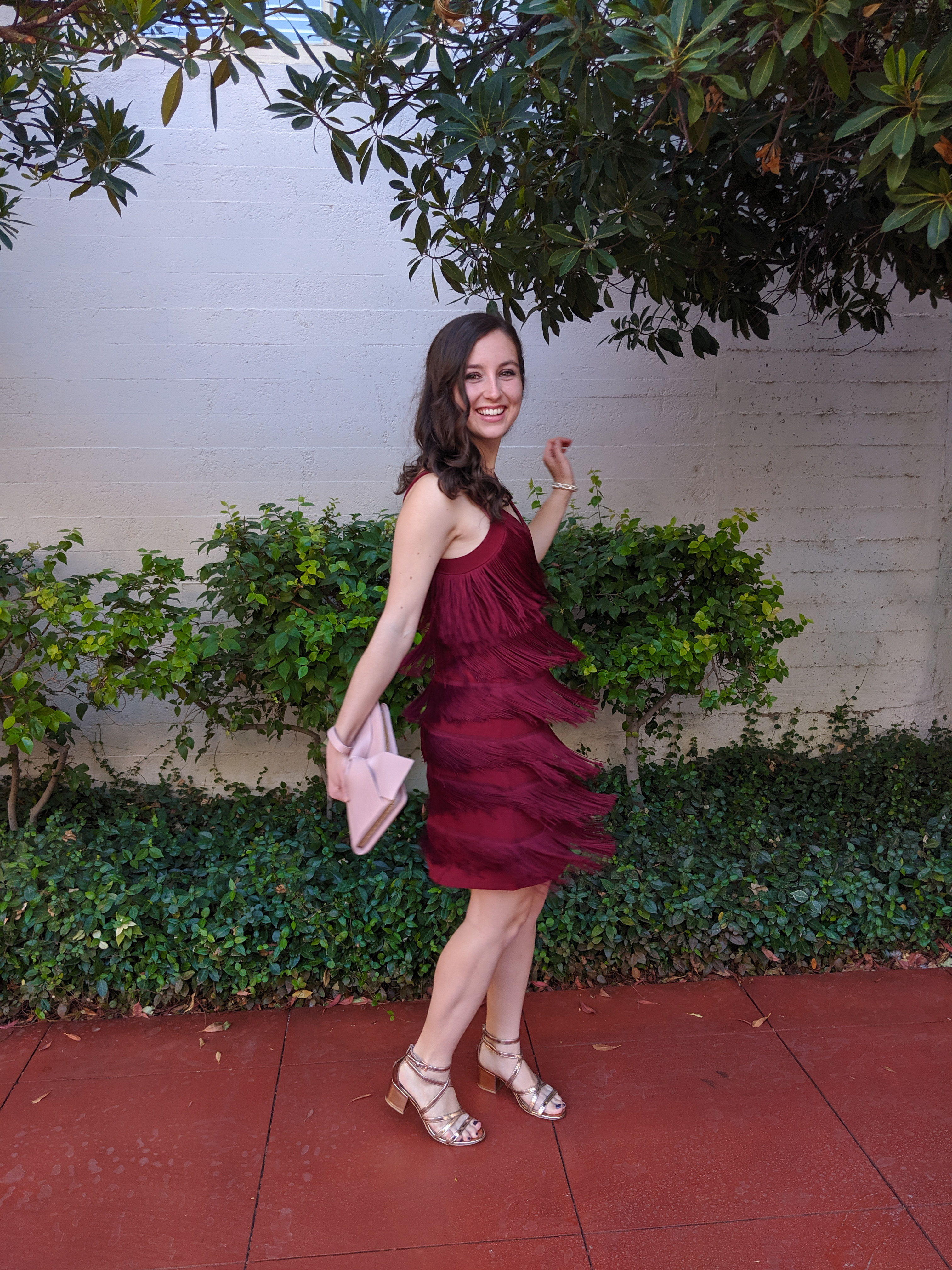 In February of this year, my friend Rachel invited me to go to dinner with her at the Cheesecake Factory because she had a gift card burning a hole in her pocket. I feel the need to mention that in choosing someone with whom to spend the evening, I was given priority over her own boyfriend. So yah. I’m pretty cool I guess.

Besides the cheesecake, Rachel was most excited to get dolled up—we decided that our outing downtown was the perfect excuse to throw on a party dress, do our makeup, and take lots of photos. What can I say? When you don’t have homecoming anymore as a reason to wear your favorite cocktail dress, you gotta get creative. As we were brainstorming what outfits to wear, Rachel raised the question, “What if someone asks us why we’re dressed up?” She then concluded that we would need an explanation for our attire. I jokingly said, “We should pretend we’re gonna get married!” and then started to giggle. 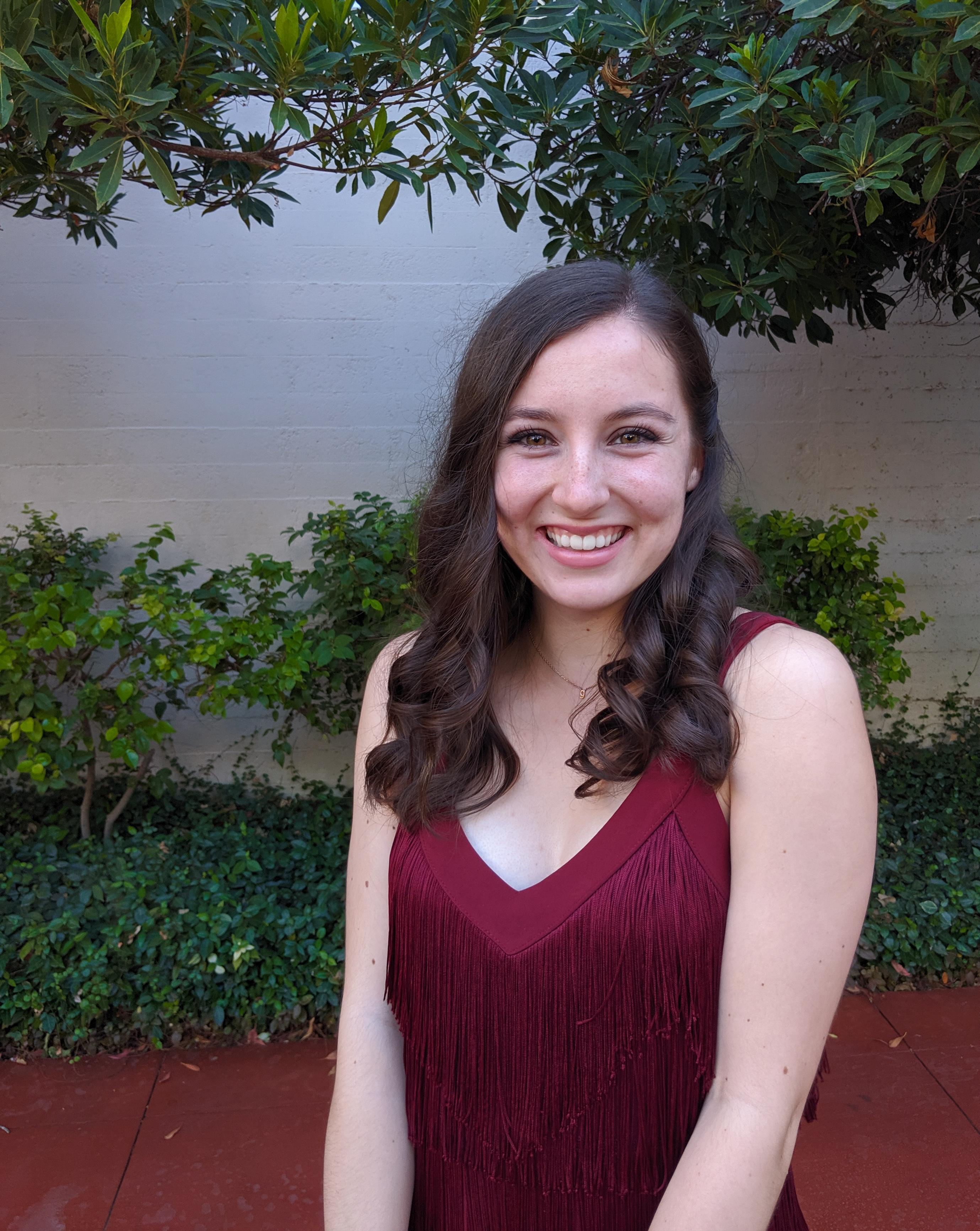 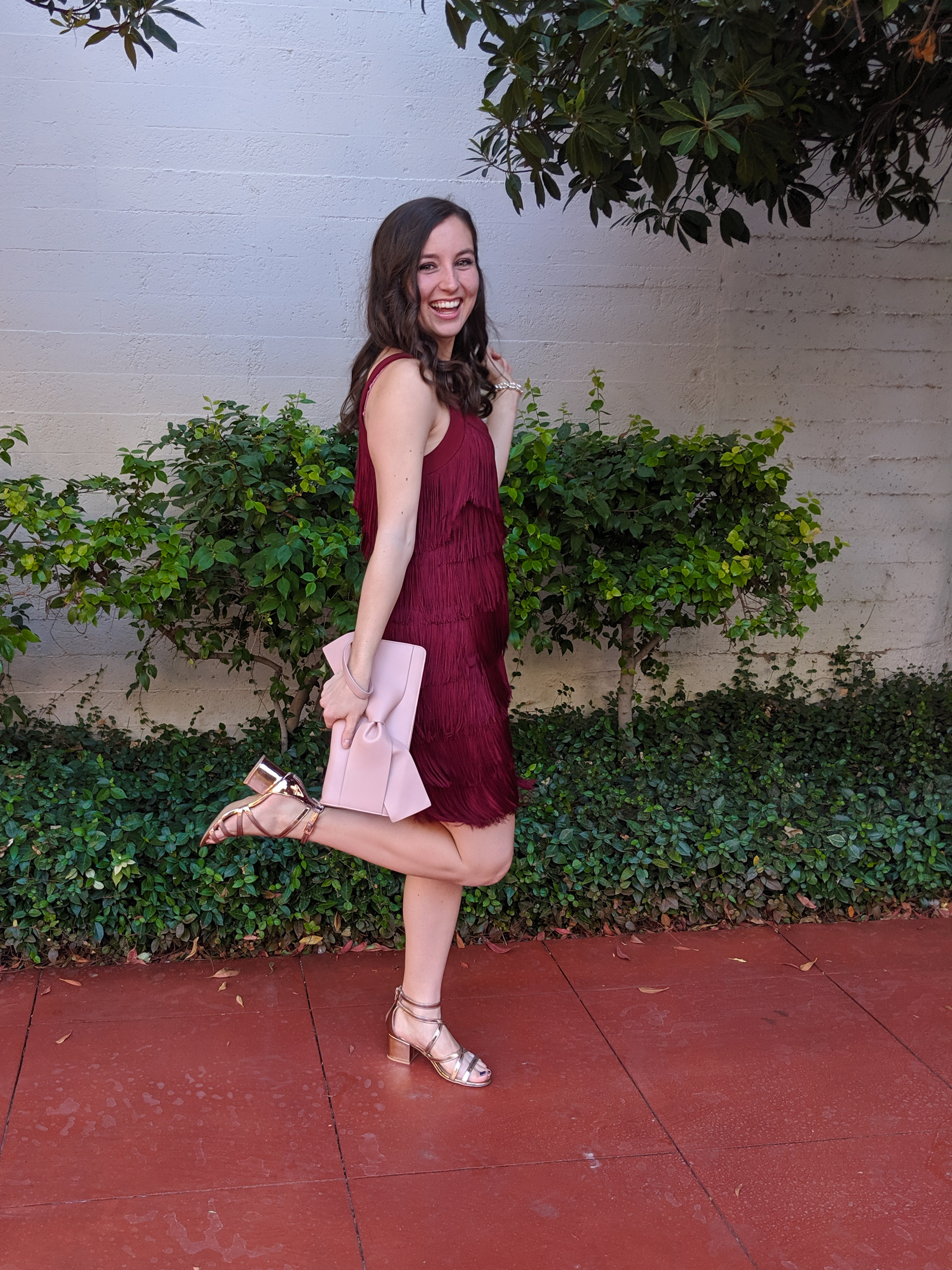 By the next weekend, Rachel had planned an elaborate scheme to propose to me and had discussed the plan with all our mutual friends. It remained a secret to me. I did, however, provide Rachel with a ring of mine—a small, gold wrap ring with 2 rhinestones that screamed, “I am costume jewelry, not a real diamond you fool.” It was the only ring I had that looked even remotely like an engagement ring and that fit my tiny ring finger. We made do. I had asked Rachel not to get the ring dirty, so I knew her proposal scheme didn’t involve a ring at the bottom of a glass of champagne Martinelli’s or a ring wrapped around a pretzel stick/embedded in the whipped cream topper of a cheesecake. But besides that, the anticipation was killing me.

We arrived at the Cheesecake Factory downtown, Rachel in a saucy gold dress and me in this crimson fringe number (which, by the way, is as fun to dance in as you might expect). Rachel divulged that she wouldn’t propose until dessert, so we both had to sit anxiously through our meal to get to the “main course,” so to speak. On top of the anticipation for our crazy plans for the night, we were hoping we’d be given a free cheesecake to celebrate our proposal. That would be the only way to determine if our acting skills were good enough to actually convince the waiter that we were planning on getting married. Plus, I mean, it would be free cheesecake. Fingers crossed! 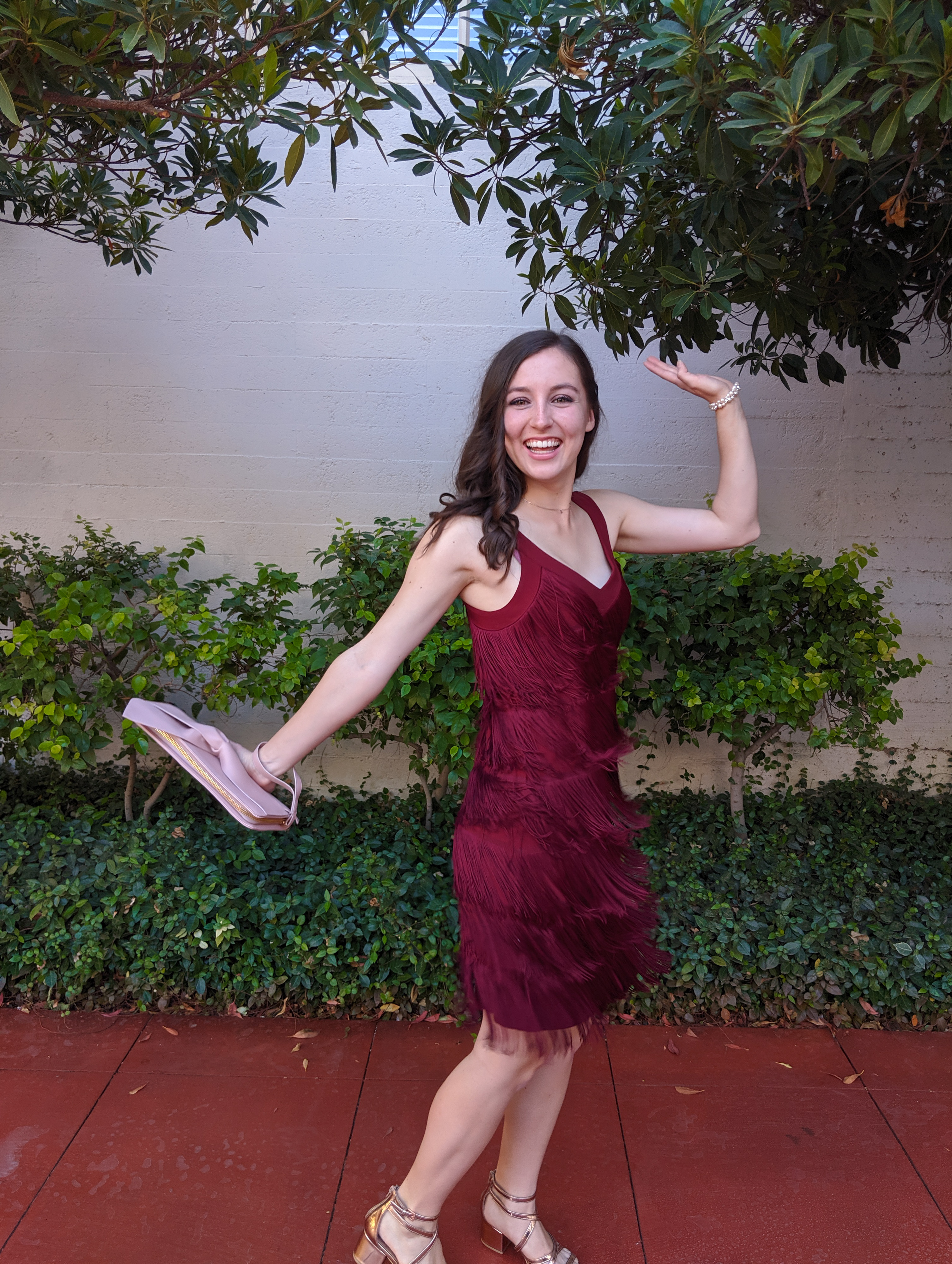 Dinner itself was uneventful, as you might expect, and our waiter was a young boy about our age (this is an important detail for later). He seemed nice, which relieved Rachel because she needed the waiter’s help to carry out her plan. As we were finishing up our entrees and preparing to order our desserts, both of us started to get very nervous… Rachel told me what I would have to do: When the waiter came back to take our dessert orders, I would have to order my cheesecake first and then promptly go to the bathroom so that Rachel could be alone with him. I could see the fear flash across Rachel’s face. We had many concerns about the plan, mainly: “What if they know we’re just playing pretend?!” I was also worried that Rachel might bend down on one knee, which instead of appearing romantic would only feel highly embarrassing for me, as the restaurant was completely full and there were guests sitting on all sides of our table. There were many unknowns.

The waiter came back to our table and it was showtime. Just like we agreed, I ordered my gluten-free chocolate cheesecake and then immediately stood up to walk to the lady’s room. If I’m being completely honest, my curious self took a peak around the corner to watch Rachel’s interaction with the waiter, but I couldn’t really hear or see anything. I then went into the bathroom to make sure there was no food in my teeth (we’ve all been there) and waited for Rachel’s text to say I could return.

When I went back to the table, we just sat in a nervous, jittery silence, awaiting our cheesecakes. Rachel stared at me intently with an interesting face and revealed a mischievous smirk. It seemed to us that other waiters began to take notice of us as they passed by. Had our waiter told everyone else what was about to happen? Would this be a huge spectacle?! Rachel reached across the table to hold my hand—we really had to sell it. 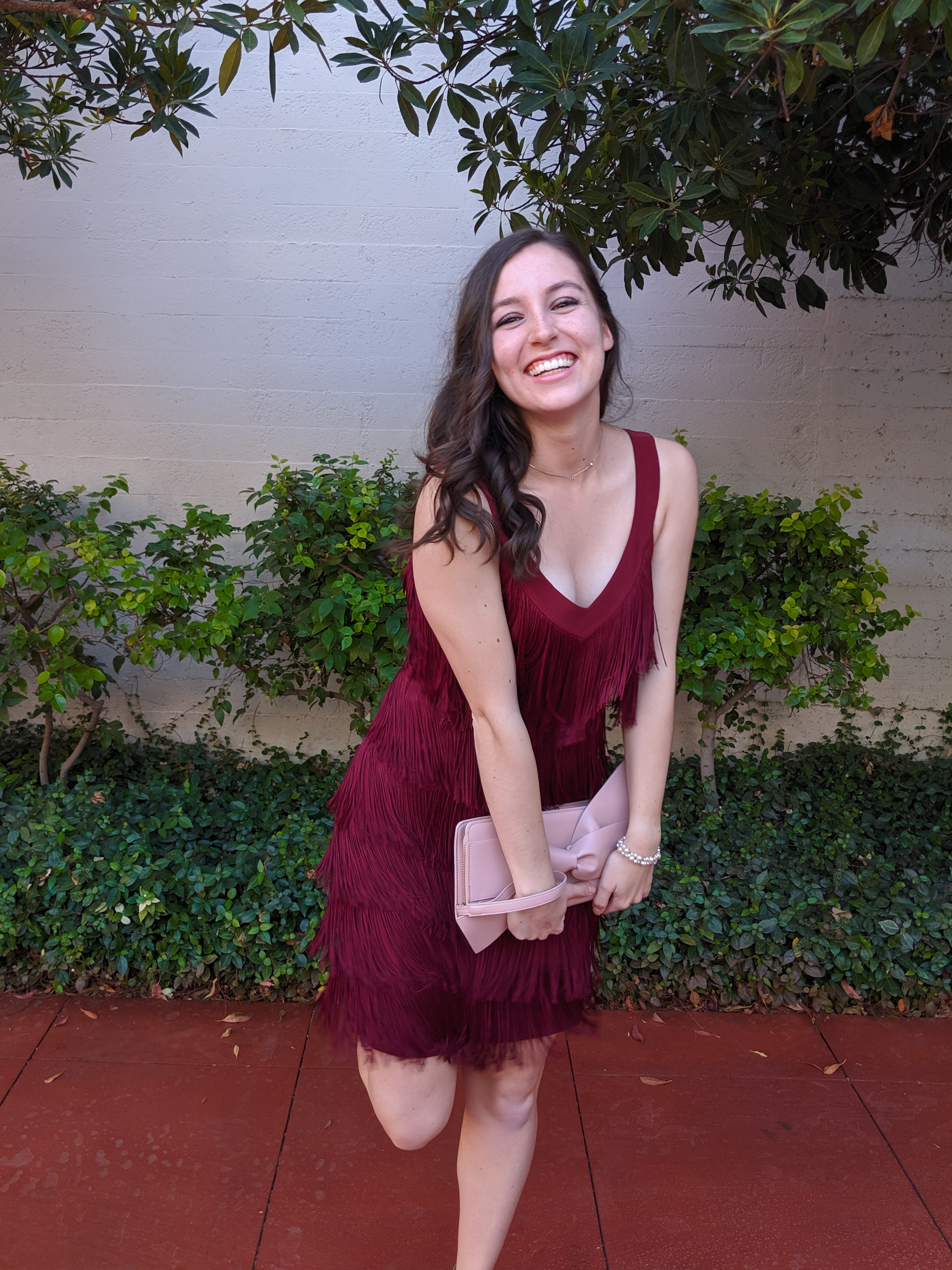 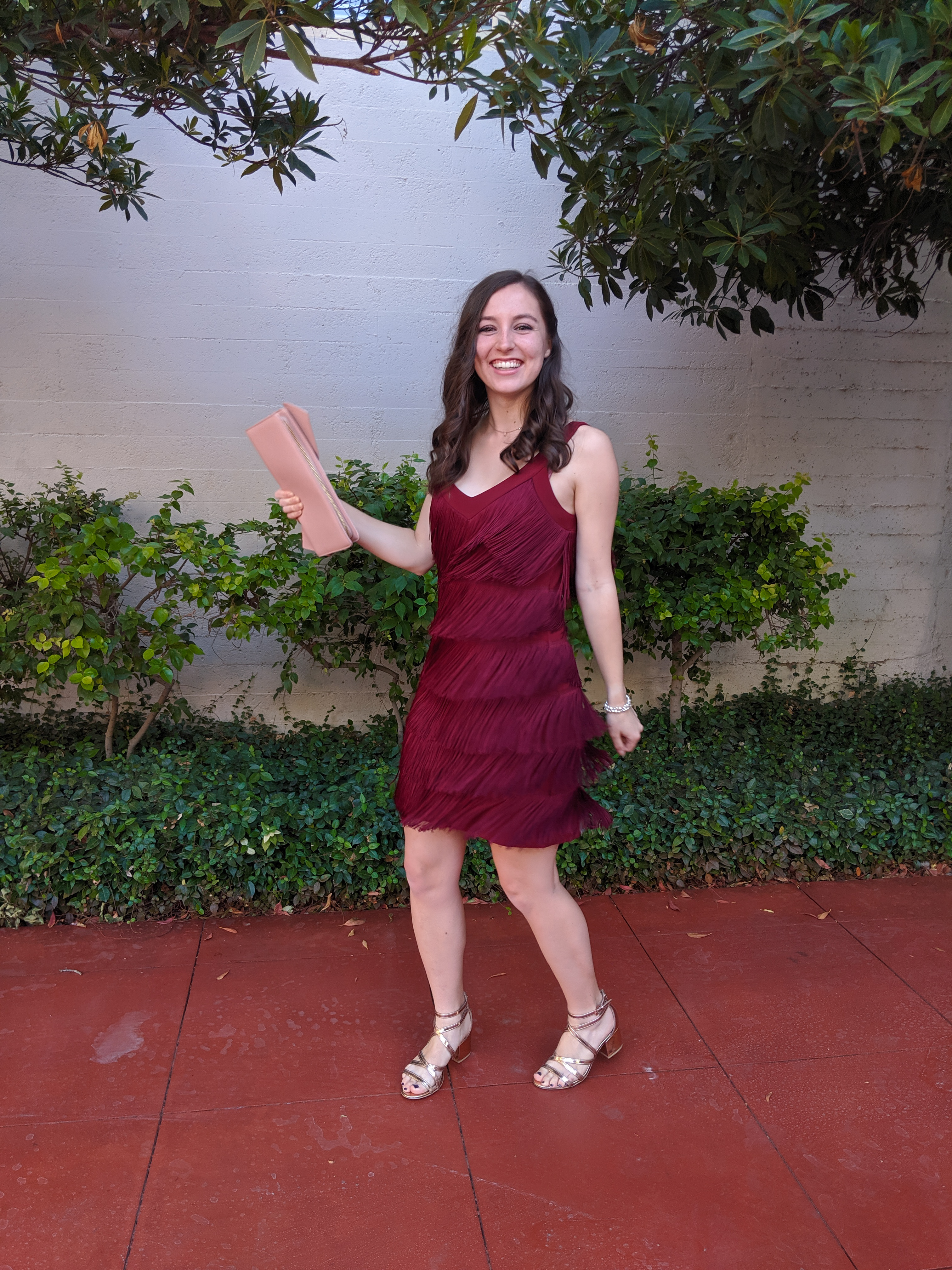 When the waiter returned, he placed Rachel’s cheesecake down first and then served my cheesecake. And that’s when I saw it. There, on the plate, written in chocolate sauce, were the words, “Will you marry me?” Because the form of the proposal was a complete surprise to me, it was easy to show genuine shock. I actually gasped and covered my gaping mouth with my hands, completely overwhelmed and surprised and excited by the gesture. All the while, our waiter was still standing there with a questioning look on his face. Perhaps he was trying to figure out if we were serious? If he didn’t believe us before, he certainly would after seeing my reaction. He then walked away, thank goodness, but we saw him watching us from afar.

I was still awestruck by my cheesecake when I looked up and saw Rachel holding a ring out to me. She recited a small speech, something that started with, “Grace, from the very first moment you entered Room 220 North Towers, I knew you were the one for me.” I can’t even remember the rest of the speech because I was still so overwhelmed by the special cheesecake in front of me. I exclaimed a breathy, “Yes!” and then Rachel placed the ring on my finger.

We started to eat our cheesecakes and looked around to see if anyone had noticed what just took place. It seemed like they hadn’t, although certain waiters continued to look at us funny for the rest of the night. Rachel and I thought our work was done, but then we realized that the waiter would be coming back to bring us our check, which likely meant he would inquire about the proposal! Our stress levels began to rise again. 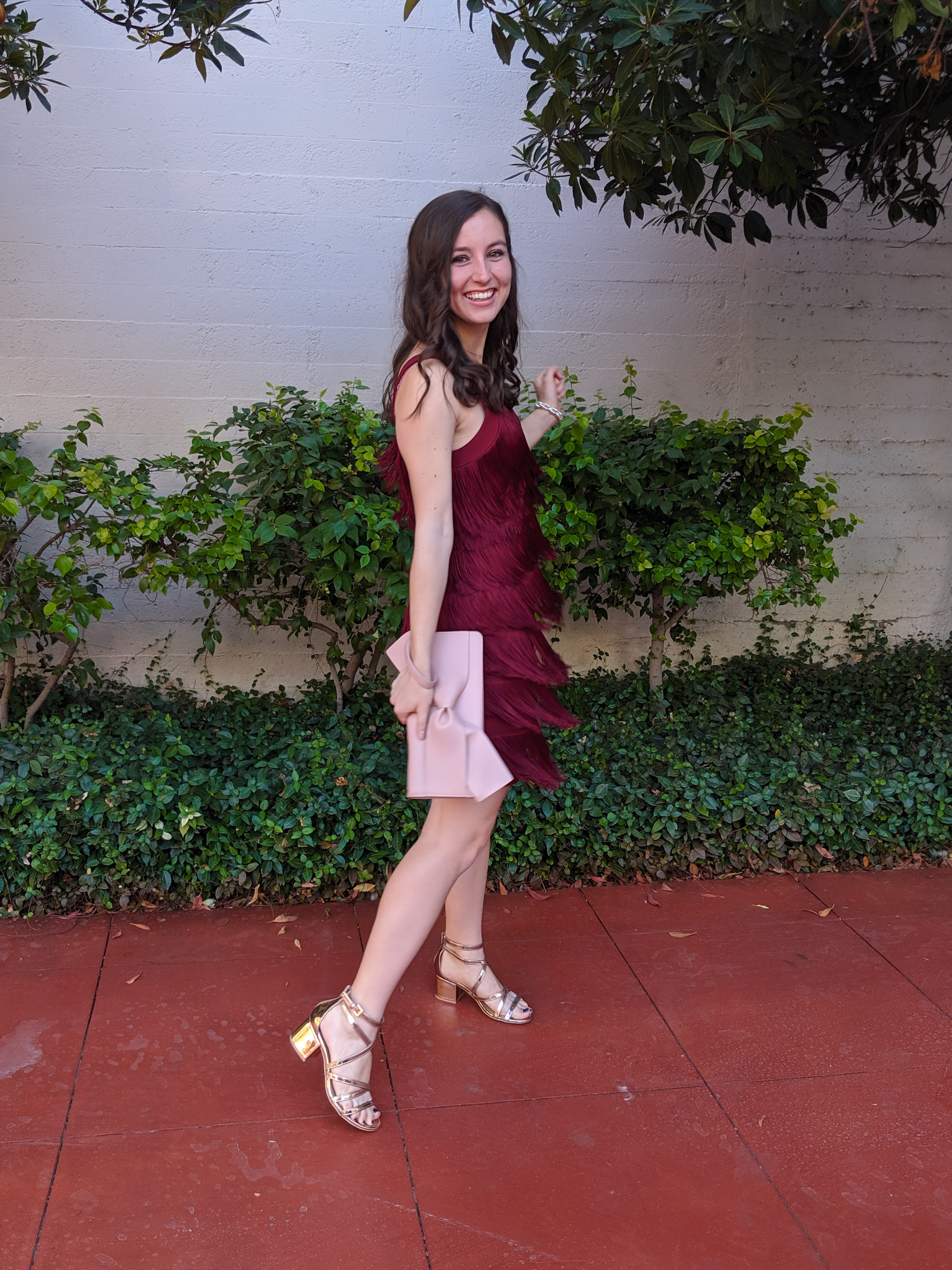 When he did return, we completely ad-libbed everything. The waiter excitedly asked, “Well, how did it go?!” and Rachel answered by shouting, “She said yes! I’ve been nervous all day and was on the phone with her mom telling her about the plan.” All the while I was nodding and chiming in here and there, saying how surprised I was. I held up my hand to show the waiter the ring while Rachel was talking, but then I remembered it looked very fake… I quickly withdrew my hand right as the waiter was leaning in to see it. Awkward!

While the waiter seemed genuinely excited for us (remember, he’s only 21—at most), the most surprising part of the night was what he said next. “Oh, well I actually just got married in August, and the planning and stuff is so much fun. But let me just tell you…” His face became very serious now. “It gets hard. It gets real hard.”

Not only were Rachel and I blown away that this kid was already married, but even more so, we couldn’t believe how he warned us of marriage’s difficulties. I thought he was saying the wedding planning gets hard, but Rachel was convinced he meant marriage itself. I’m no expert, but exclaiming how hard married life can be to a couple that just got engaged seemed like the wrong move. Rachel and I didn’t really know how to respond, so we just sort of smiled and nodded.

The waiter finished by looking at me and saying, “Congratulations, and your cheesecake will be on me tonight.” A free cheesecake! He believed in our acting skills! It was clear nobody doubted that our proposal was legitimate. 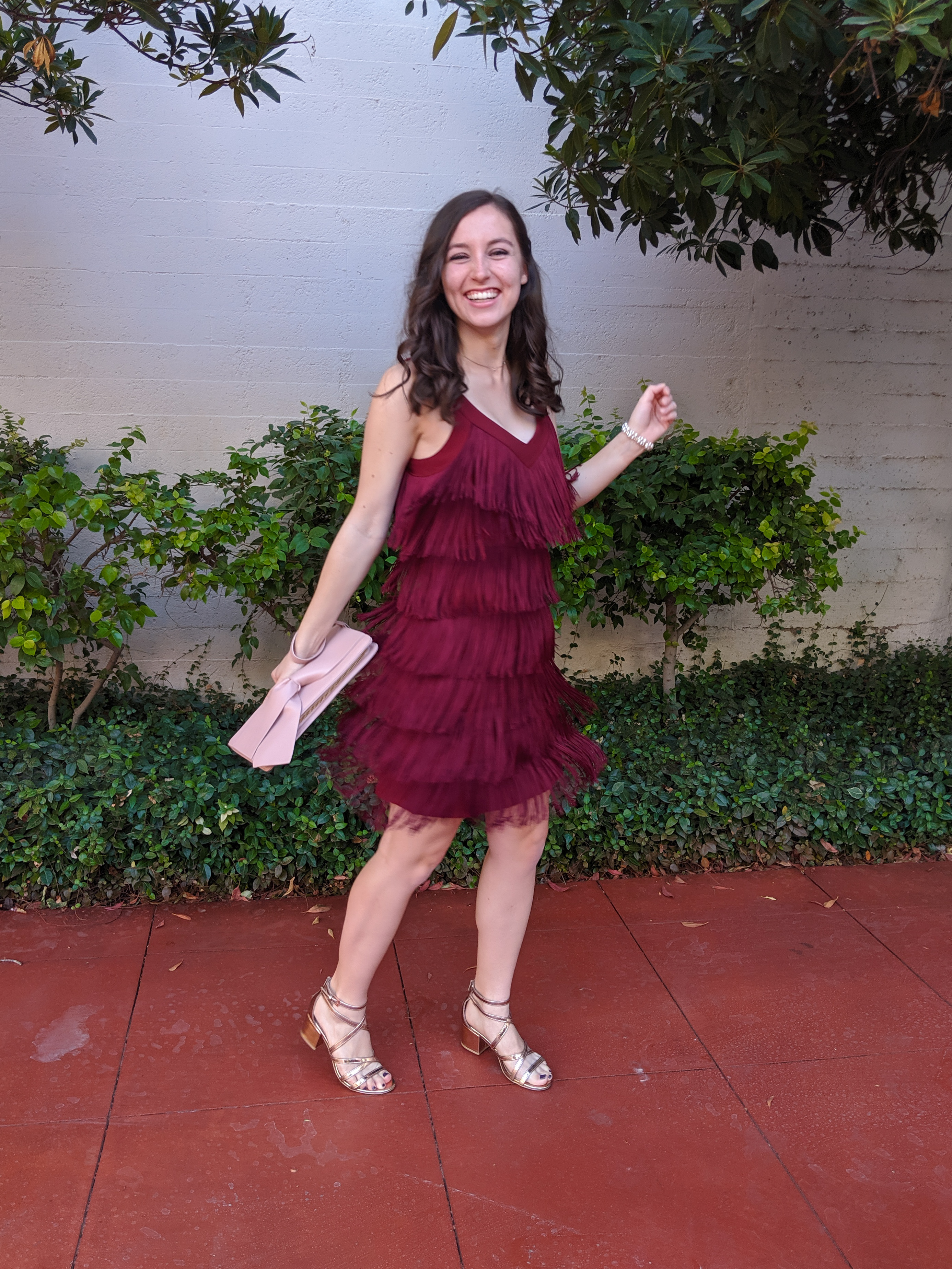 While we should have been celebrating our acting success, Rachel and I immediately felt extremely guilty. We had never considered the implications of actually receiving a free, $7 slice of cheesecake. Ultimately, we were con-women and had just cheated the Cheesecake Factory out of a slice of dessert. We became hung up on the waiter’s words: Did saying, “Your cheesecake is on ME tonight,” instead of “the house” mean our waiter paid for it with his own money? That couldn’t be right… It had to be the corporation paying for it, didn’t it?

Even though our desserts had been delicious, our night had suddenly soured with guilt. We left our waiter a huge tip—enough to cover the slice of cheesecake—to try and clear our consciences. Then we gathered our things, held our heads high, and marched out of that downtown Cheesecake Factory, hand-in-hand, laughing hysterically on the entire ride home.

Rachel and I laugh about this moment to this day, sharing our bold and exciting proposal story with only our closest of friends for fear of judgment. We no longer feel guilty because a) we had technically paid for the cheesecake in our tip and b) we convinced ourselves that it was the Cheesecake Factory corporation paying for it, not our young waiter.

Regardless, I know I’ll be telling this story the rest of my life. And I can’t wait ‘til the day I get to tell my own children that I was once engaged to someone other than their father! Ha.

So what is your wildest, craziest, funniest story? Please please please feel free to share in the comments below! I look forward to reading them. Oh, and have a great Monday.

4 comments on “The Funniest Story of My Life”