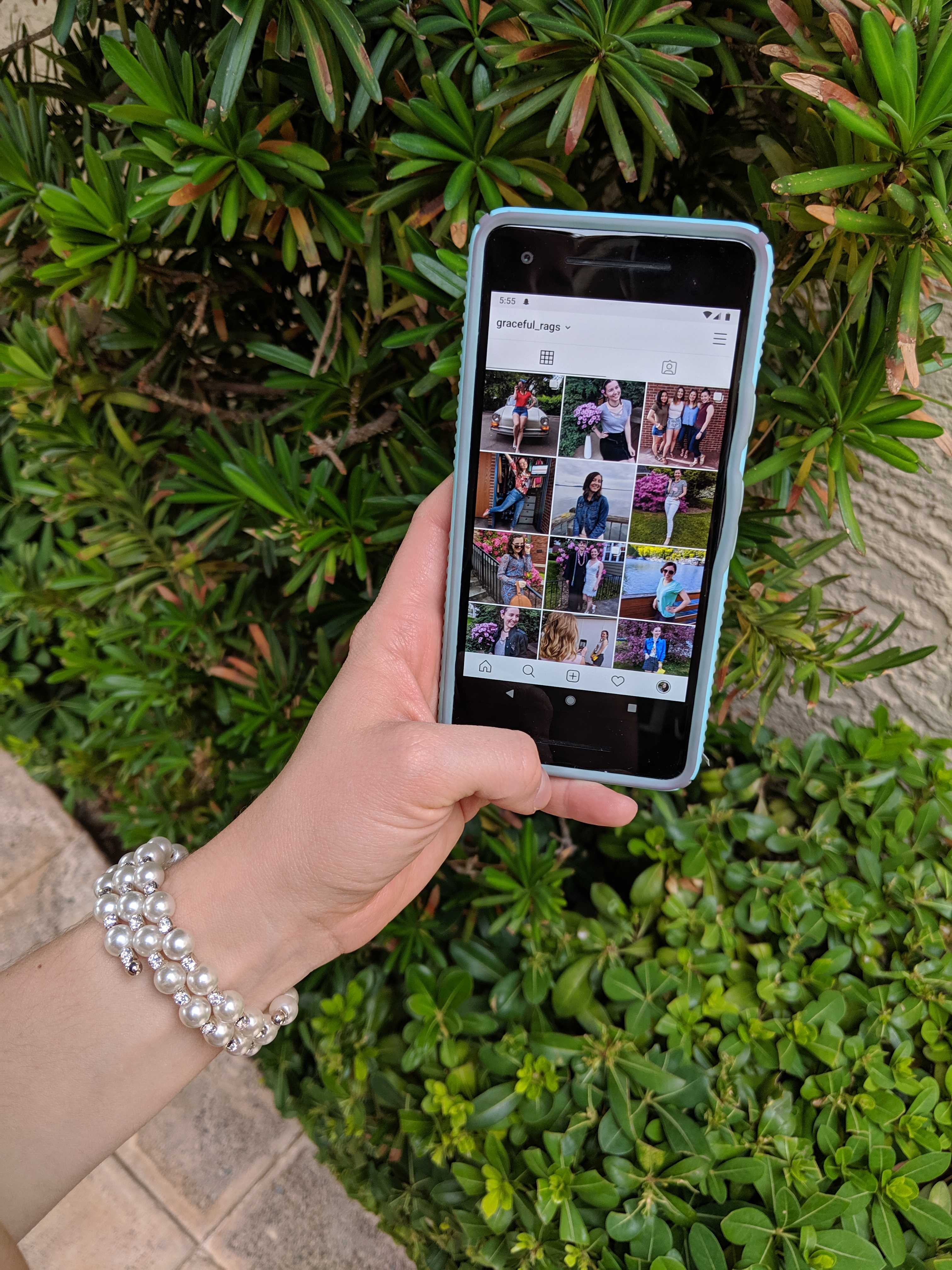 For the last few weeks, I’ve been trying really really hard to curate a cohesive Instagram feed. –Wait, what’s that you say? You haven’t noticed? Yah, I feared as much… In an attempt to boost my Instagram engagement, I figured I should finally give in to the hype over having a color-coded Instagram profile, where all the photos match and share the same color scheme. In theory, it sounds rather difficult. In practice, it’s extremely difficult. 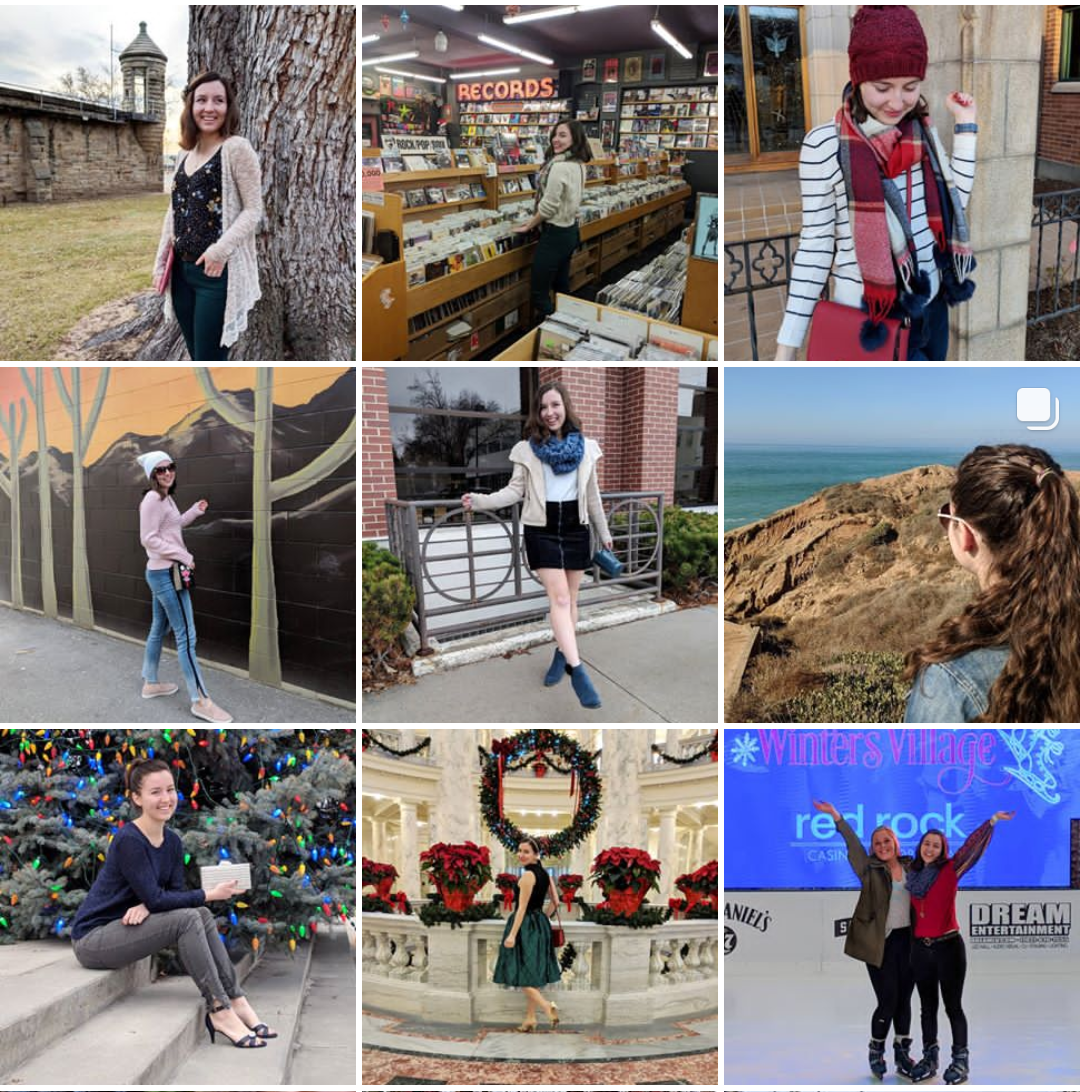 Here’s an image of my Instagram profile back in December/January. Notice the 50 shades of brown. I’ve always disliked the brown, uncolorful appearance of my feed, but clearly it hasn’t bothered me enough to do anything about it. I live in a desert where most backdrops for my photos are neutral colors/earthy/sagebrush, therefore that’s how my feed appears. Unfortunately, not all of us have access to adorable murals and ultra-colorful backgrounds like the “real bloggers” do. I figured, if I could make my feed more colorful and cohesive like the major fashion bloggers, I’d be able to boost my Instagram engagement. 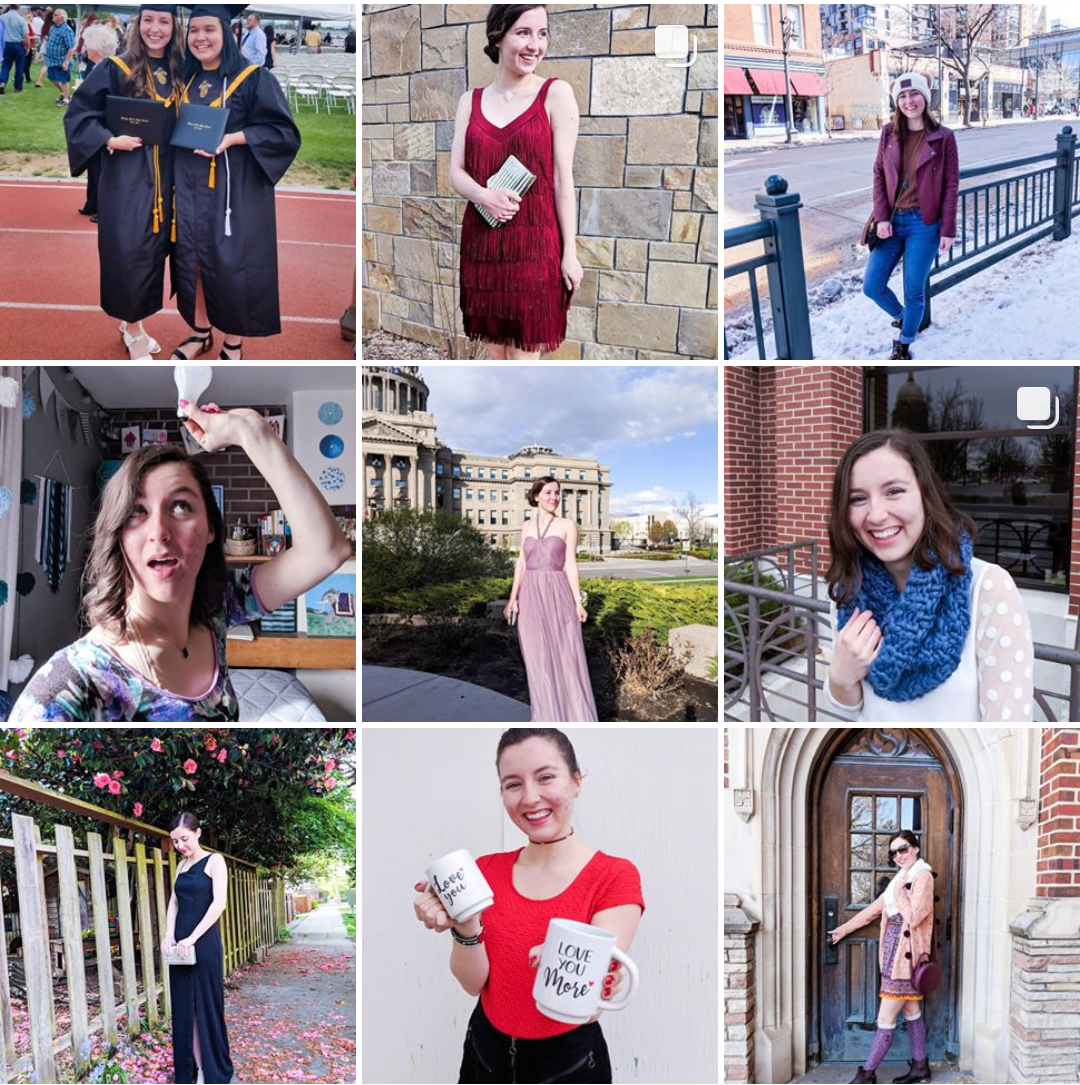 Here’s the first iteration of me trying to be cohesive with my photos. If you squint, the feed kind of has a blue/purple/pink tone. So basically I picked half the rainbow as my color scheme and hoped for the best. I was actually rather proud that each image had at least a little pink or purple (the maroon v-neck blouse, my friend’s ski pants, the flower petals on the ground, the bricks in the background, etc.), but I realized I still had a long way to go before reaching the professional blogger status.

This was also the point in my Instagram feed endeavor where I started editing my photos. I downloaded the free Lightroom app, created a few presets with pink undertones, and started applying the presets to all my photos. To my surprise, this simple trick did make a subtle difference in tying all my posts together. 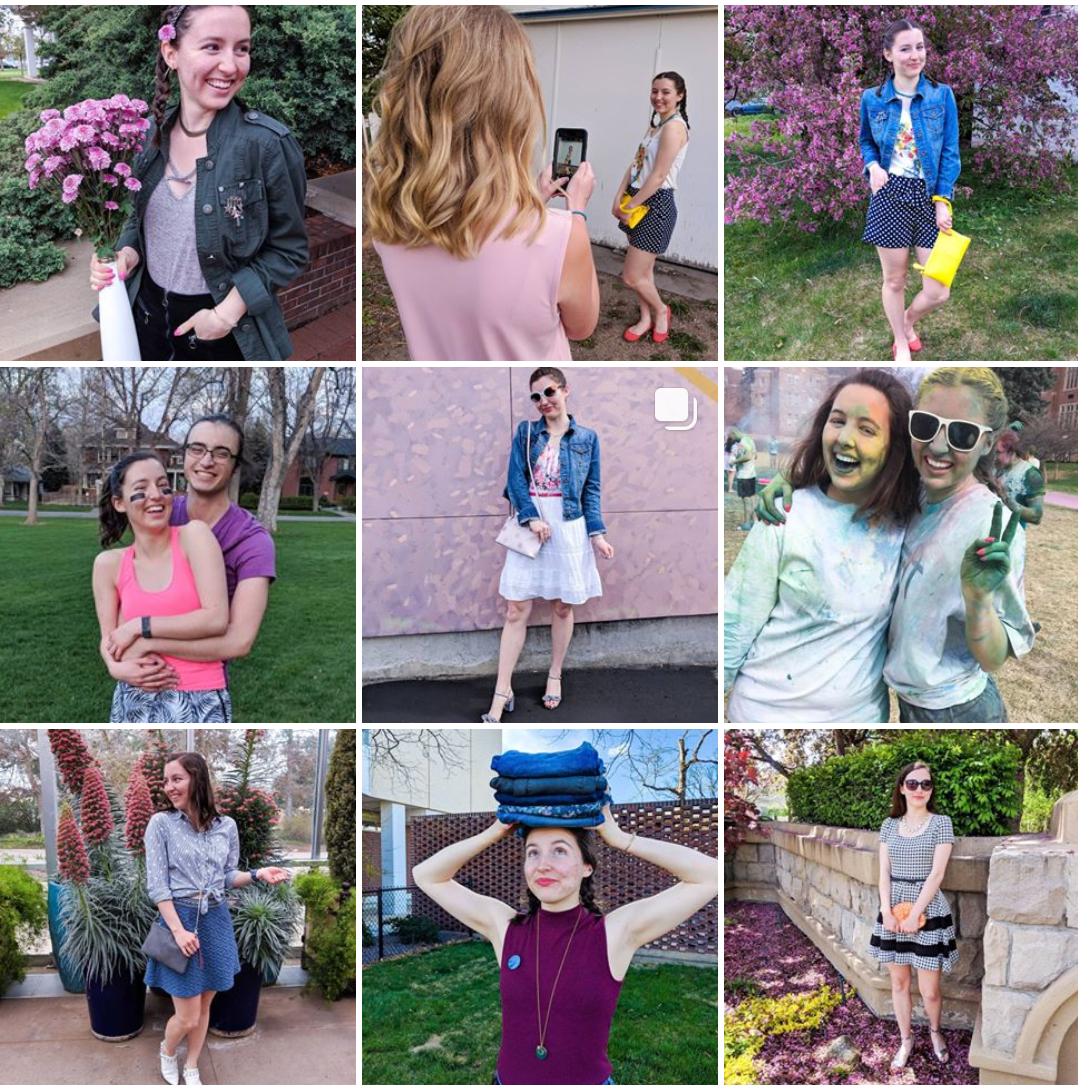 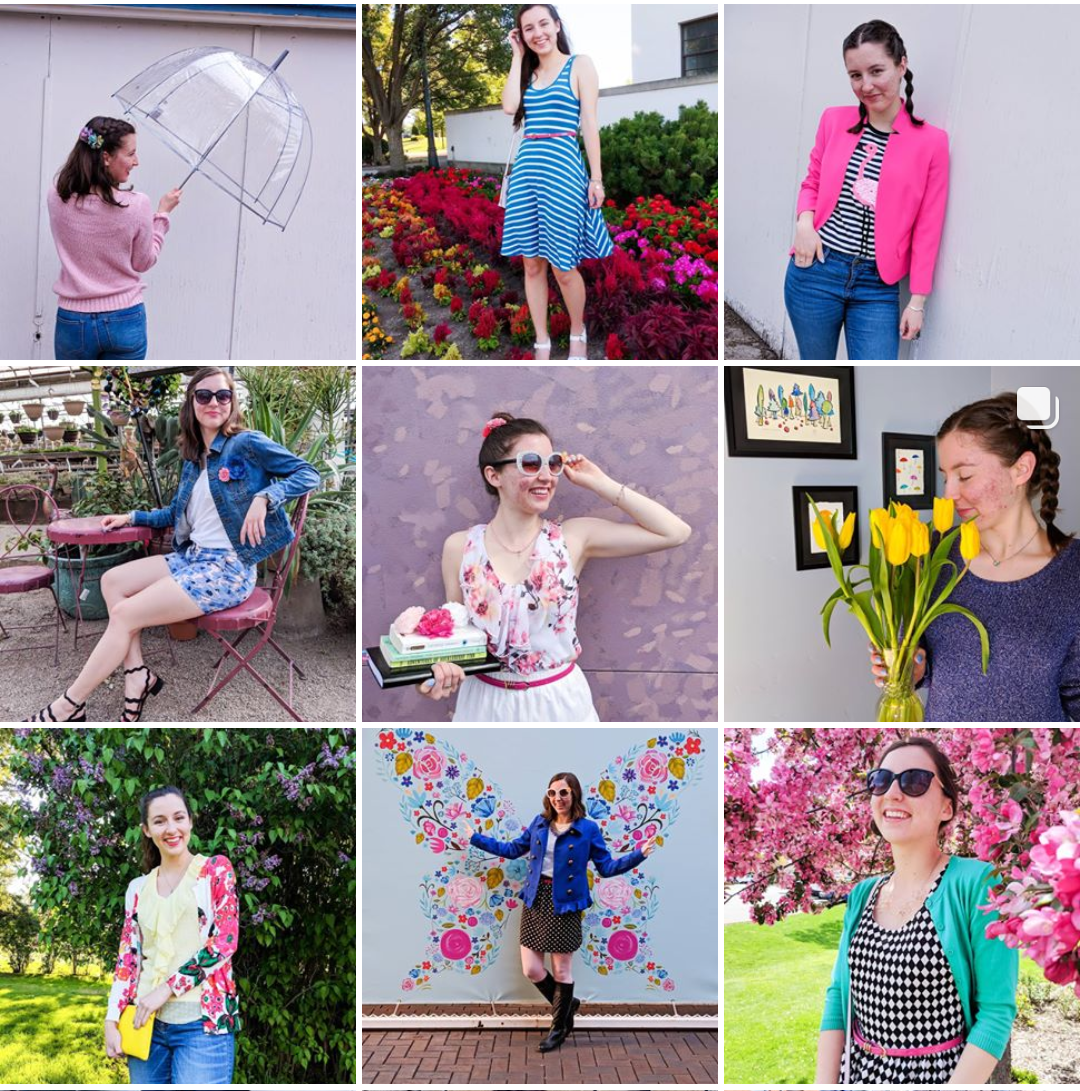 Here was my next attempt at a theme. This time I decided on flowers as the cohesive element, rather than just a specific color(s). As you can see at the bottom of this image, I really only lasted 5 posts before posting a photo without flowers in it. As it turns out, having flowers in every photo is a little difficult when nothing is blooming yet. Shocker.

The theme quickly morphed from just flowers into a floral AND pink scheme. I knew I couldn’t quite fit flowers into every photo, but in the ones where I couldn’t, I could wear something pink to keep the look cohesive. The green photo where I’m covered in powder is, of course, an exception, but my Lightroom preset gave it a pinkish hue that was just the right amount to tie it into the rest of the posts. This was also the point in time where I created a fake Instagram account to preview what my photos would look like in my feed before actually posting them. Yes, I became that obsessive. How embarrassing. 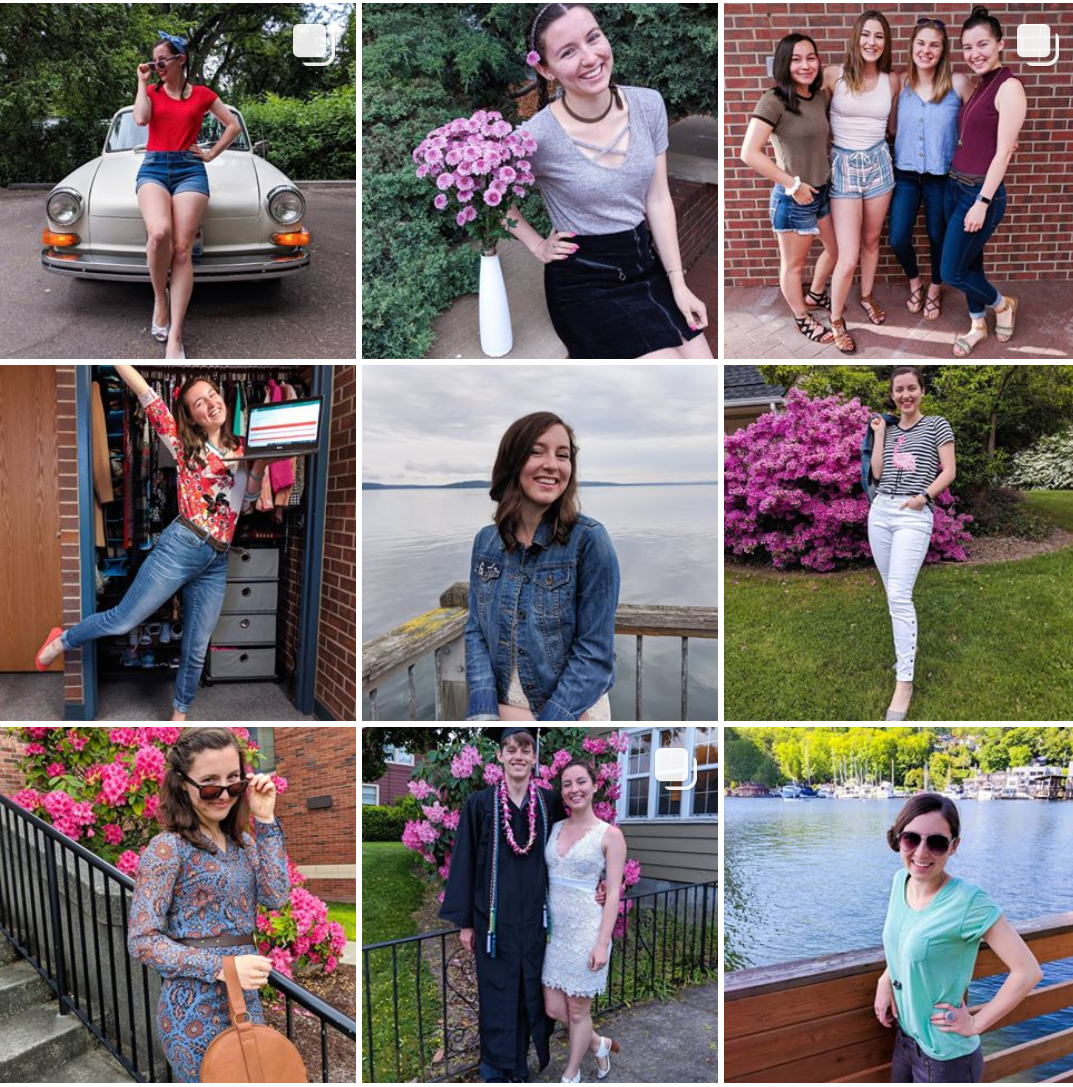 Here’s what my feed looks like currently. As you can see, the pink and flower theme is dying a slow, painful death. The bottom left photo, the photo with me holding the laptop, and the photo of me with my three girlfriends are adding a warmer, orangish tone to the otherwise cool-colored feed. The middle photo is a complete outlier because of the grey color. The newest photo with the car, while one of my favorite shots, doesn’t match the feed at all.

In the end, this is what I learned from my Instagram experiment: 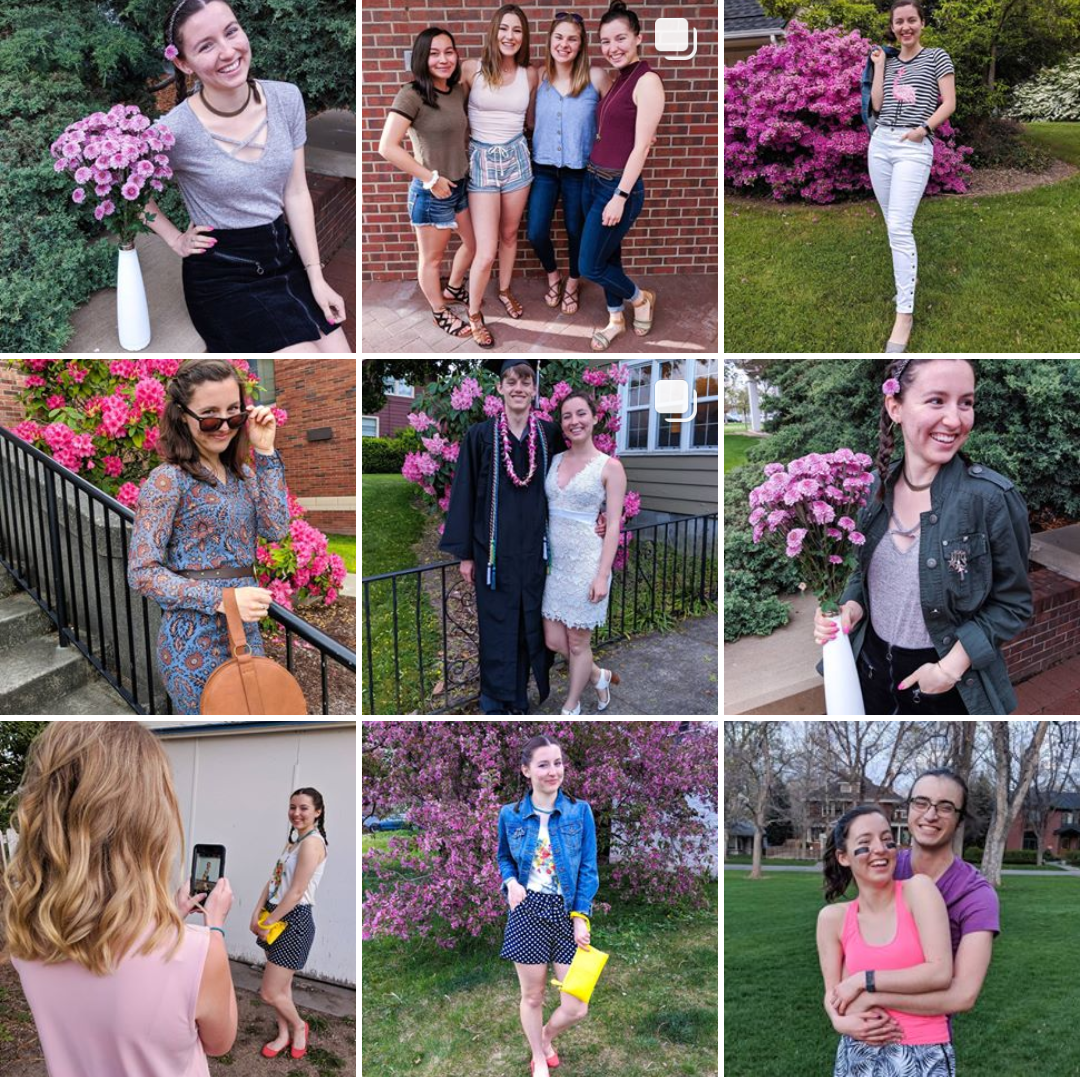 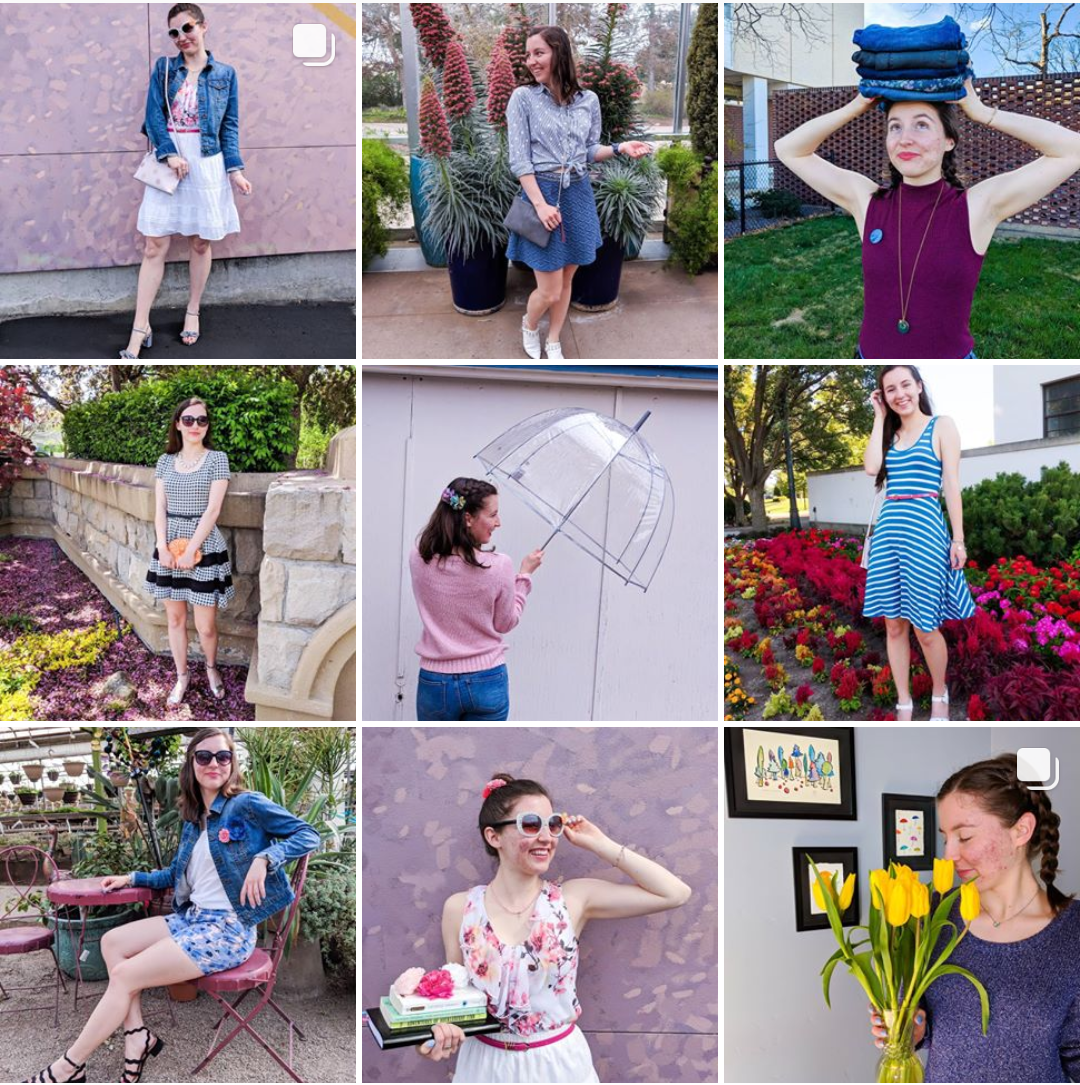 So I guess that’s that—I’m going to stop trying to upkeep a cohesive Instagram feed because that is an unattainable goal for me. All the effort it takes is just not worth it, in my opinion! Instagram should be fun and when you’re constantly stressing over how much your photos match one another, it’s not so fun anymore. I admit, it’s going to be very hard to give it up now that I’ve seen how much prettier a colorful feed can be. But alas, as I’ve outlined throughout this post, it’s embarrassing how much time I’ve spent on a silly social media platform! Farewell, pretty pink Instagram feed. May you rest in peace. 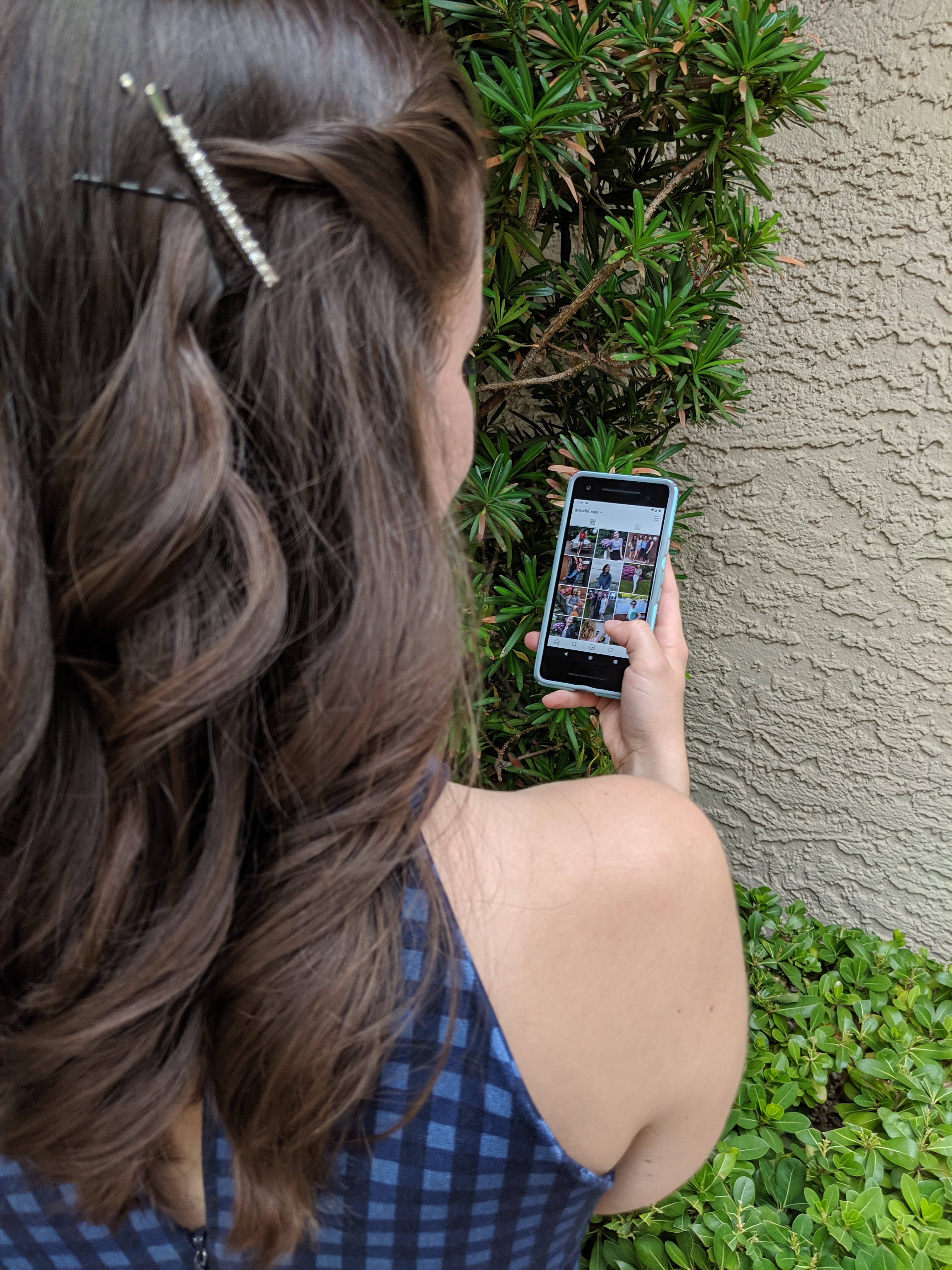 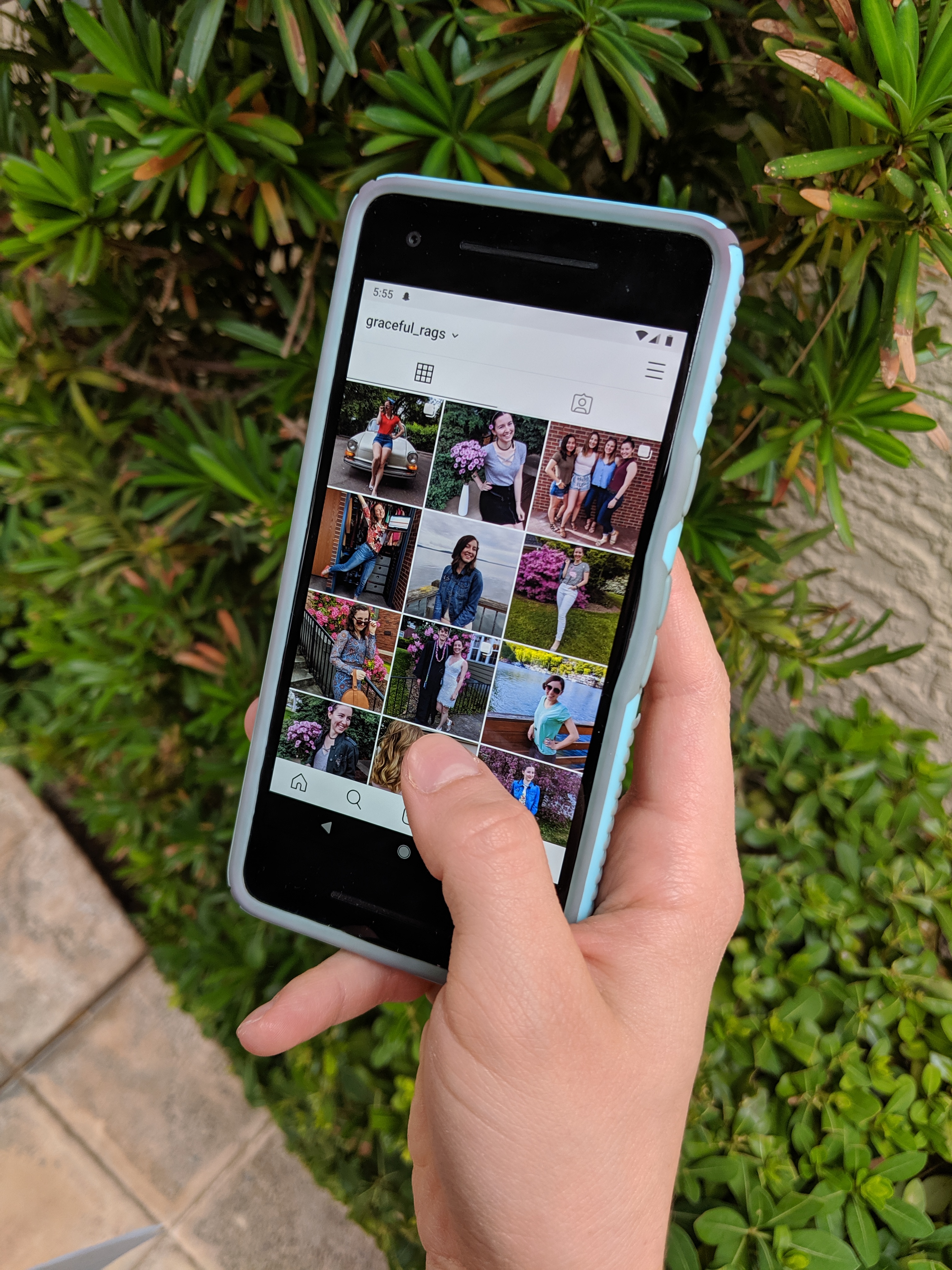 Do you put a lot of effort into your Instagram feed? Do you try to make it cohesive? I’m dying to know! Maybe it’s just me who has such a hard time with this. Is it possible that I just don’t get it, and it’s way easier for most people to make their feed look good? I don’t know, I need your help guys. Let me know in the comments below!

As always, thanks for stopping by today.

6 comments on “The Unattainable Goals of a Cohesive Instagram Feed”