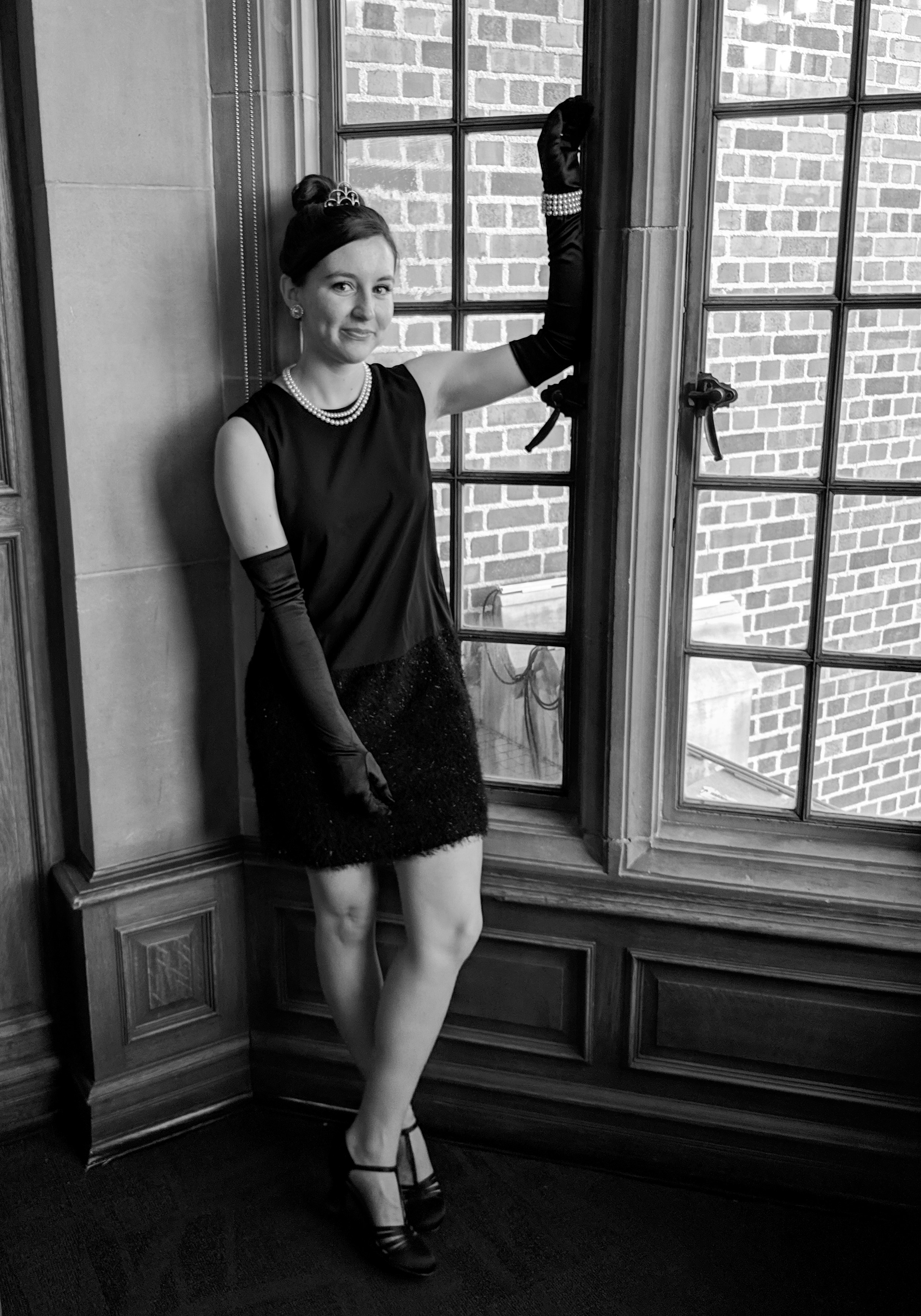 I’ve said it before and I’ll say it again—I LOVE Halloween costumes, so today’s post is dedicated to yesterday’s ensemble, Audrey Hepburn as the star of Breakfast at Tiffany’s. Lots of college students and young adults take Halloween as an opportunity to dress a little more *scandalously* than usual, but I decided to instead epitomize class and elegance by going as this fashion icon and actress. I even recreated iconic photos and shared the comparisons below! 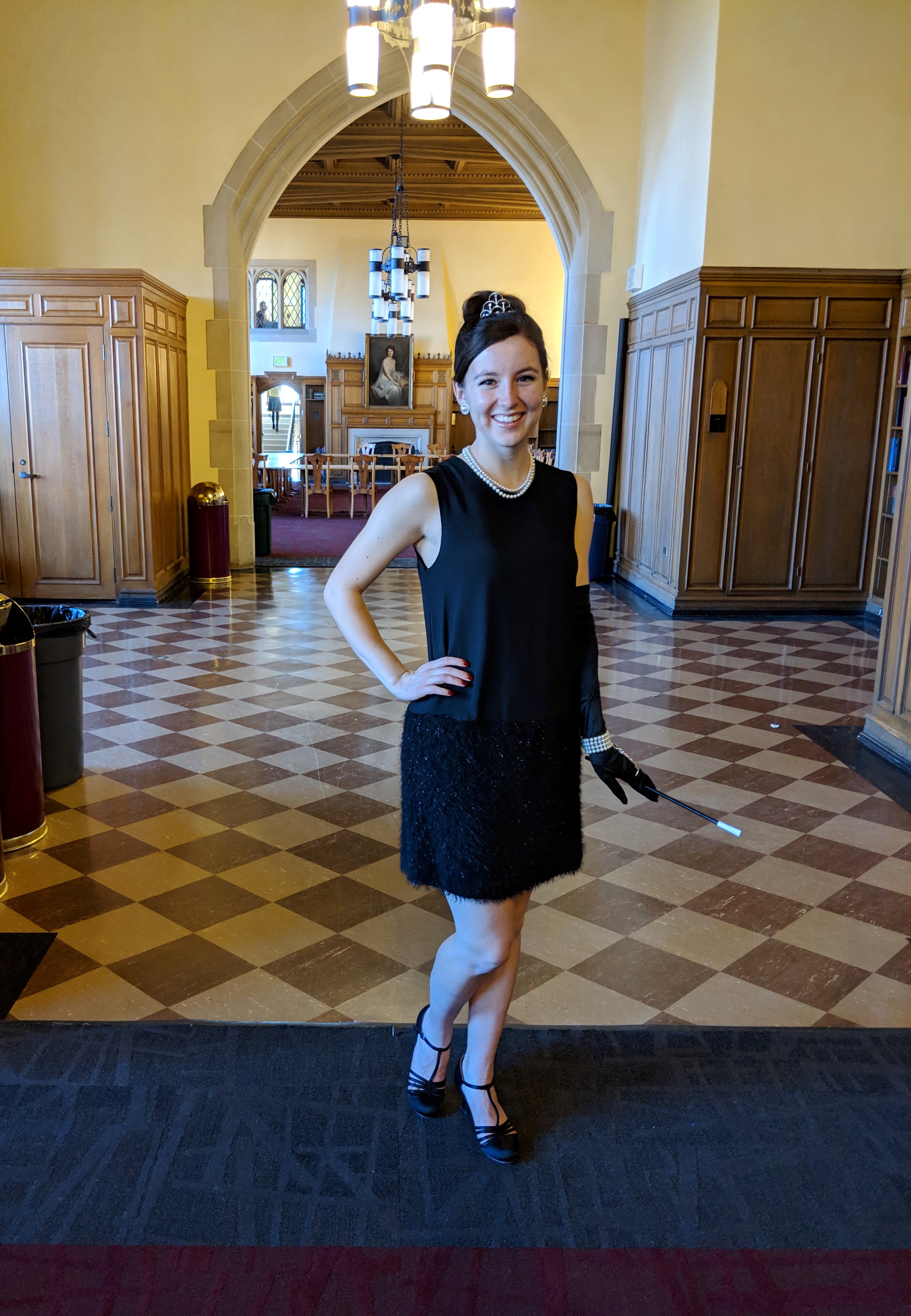 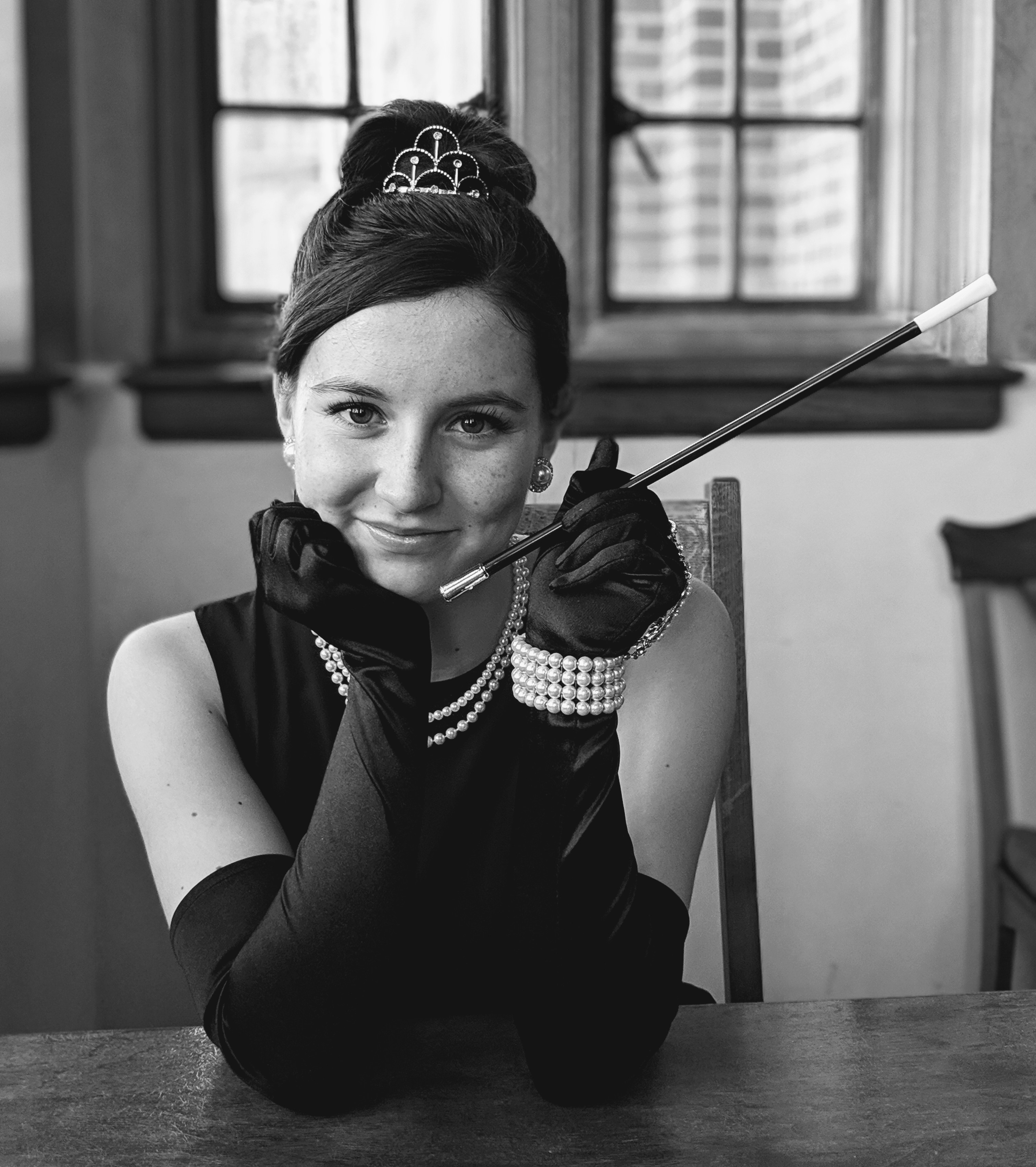 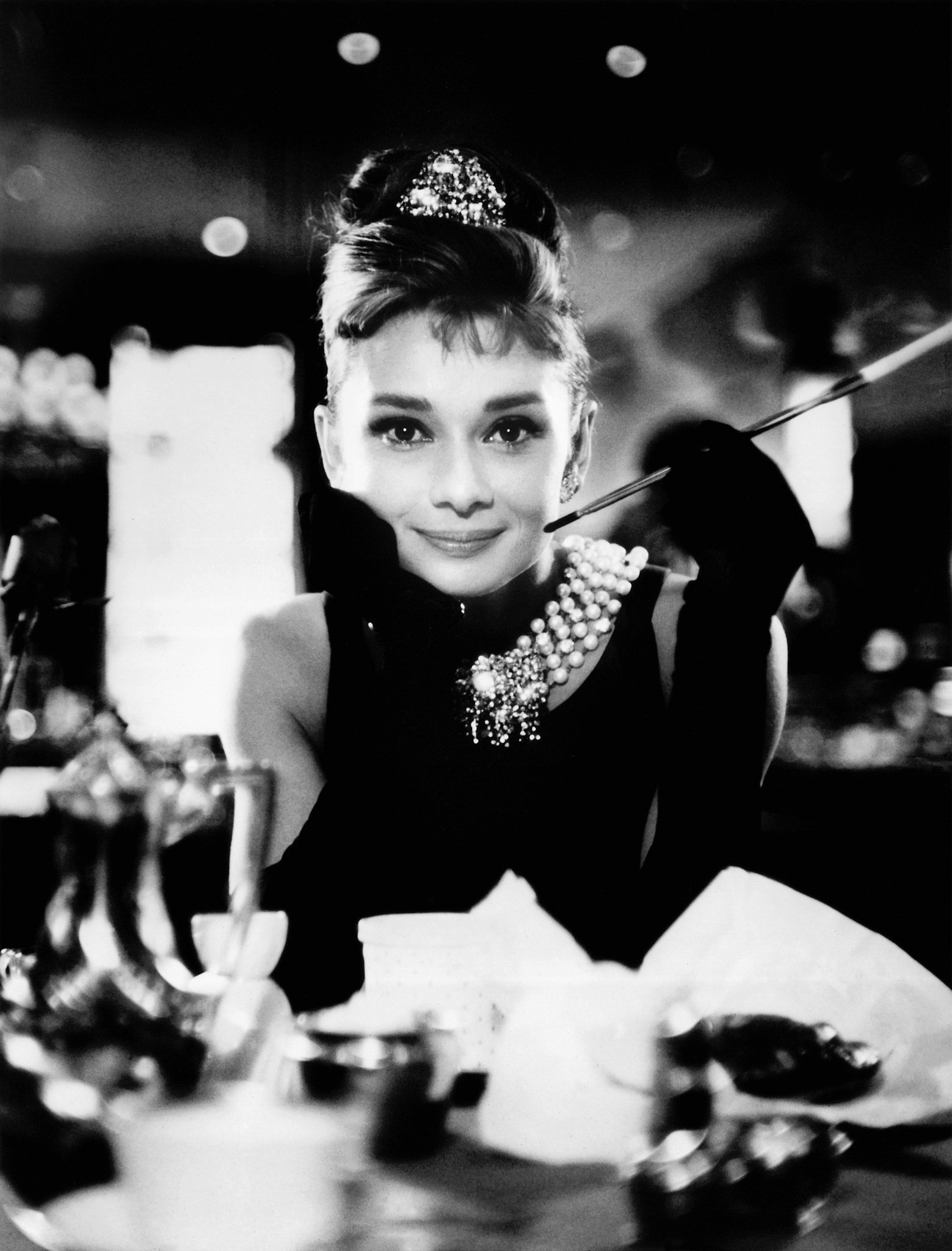 To create this look, I mostly used items already in my closet. The black dress is from the brand Joe Fresh at JCPenney’s, and I’ve worn it as both a dress for fancy occasions as well as for my other fashionable costume, a flapper girl outfit. More looks include the following posts:

“All Gussied Up” was one of my blog’s first posts back in July 2016, but my hair looks exactly the same as it does now! And the last time I wore this dress was on Broadway in New York–how fitting.

The neckline of my dress was pretty similar to the high boatneck of Audrey’s original gown, so the resemblance was canny. However, most any fancy black dress will do (I even thought my prom gown could be extra glam). That’s part of what makes this costume so fun—you get to literally dress up in a fancy outfit! 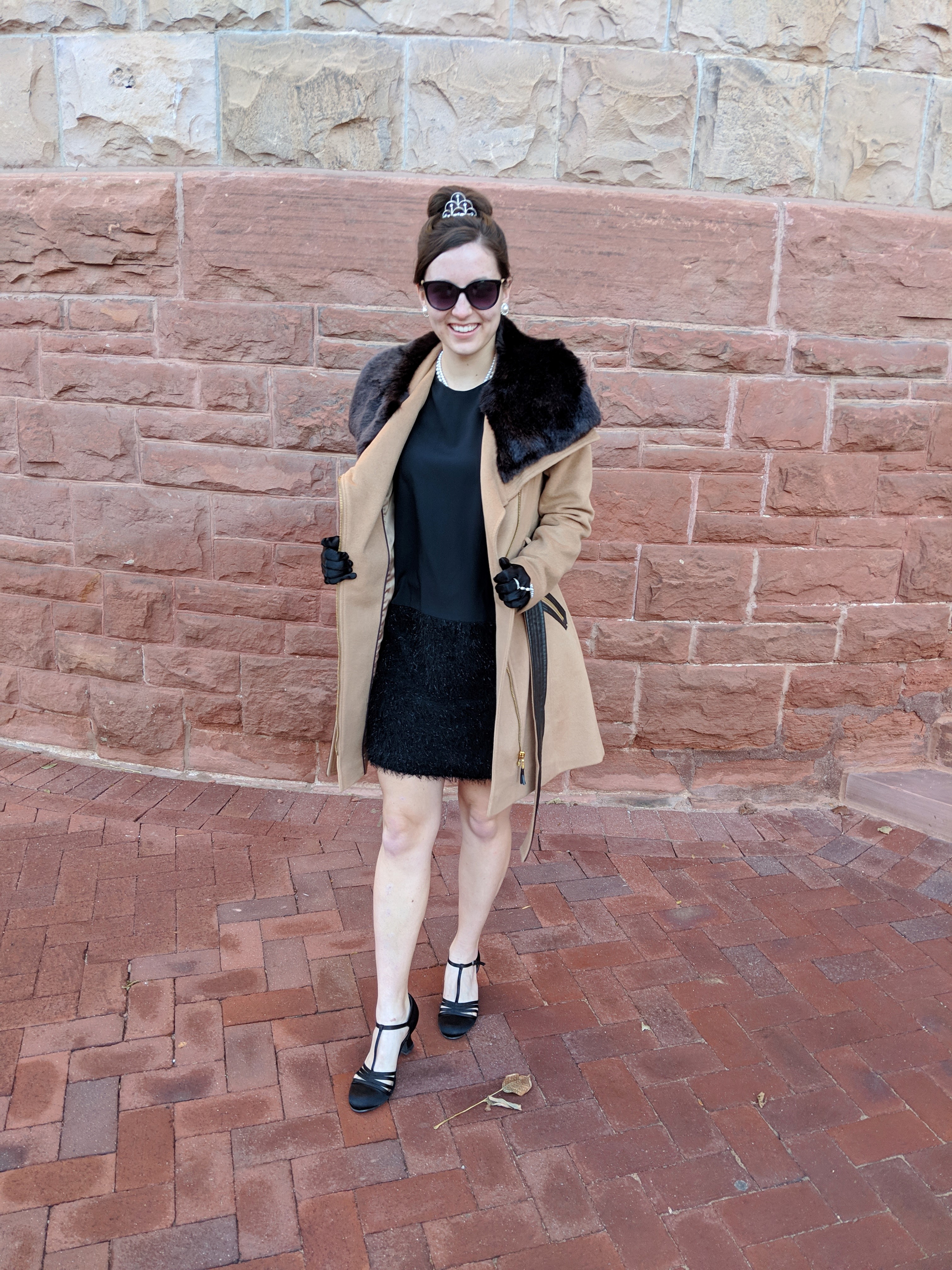 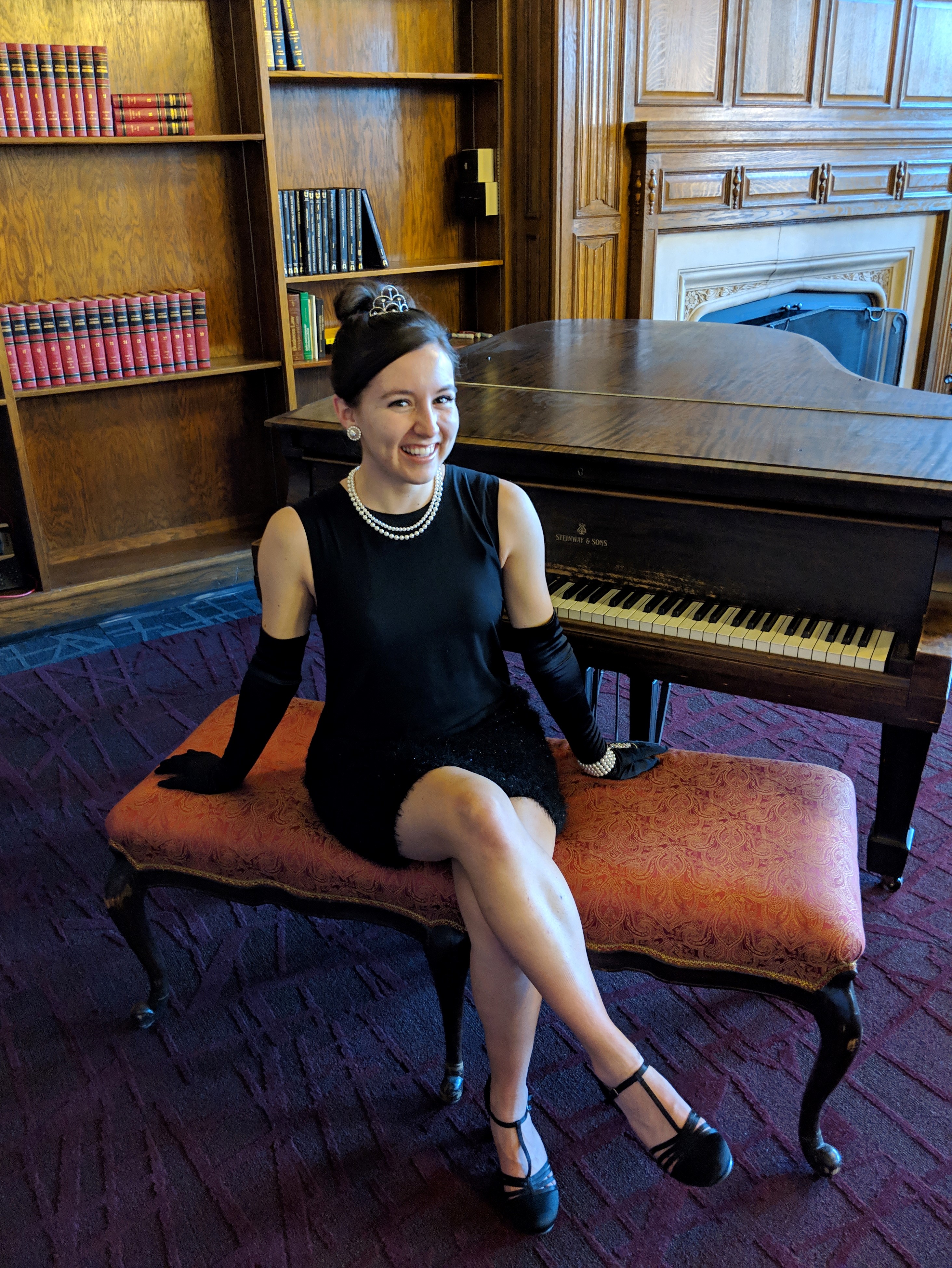 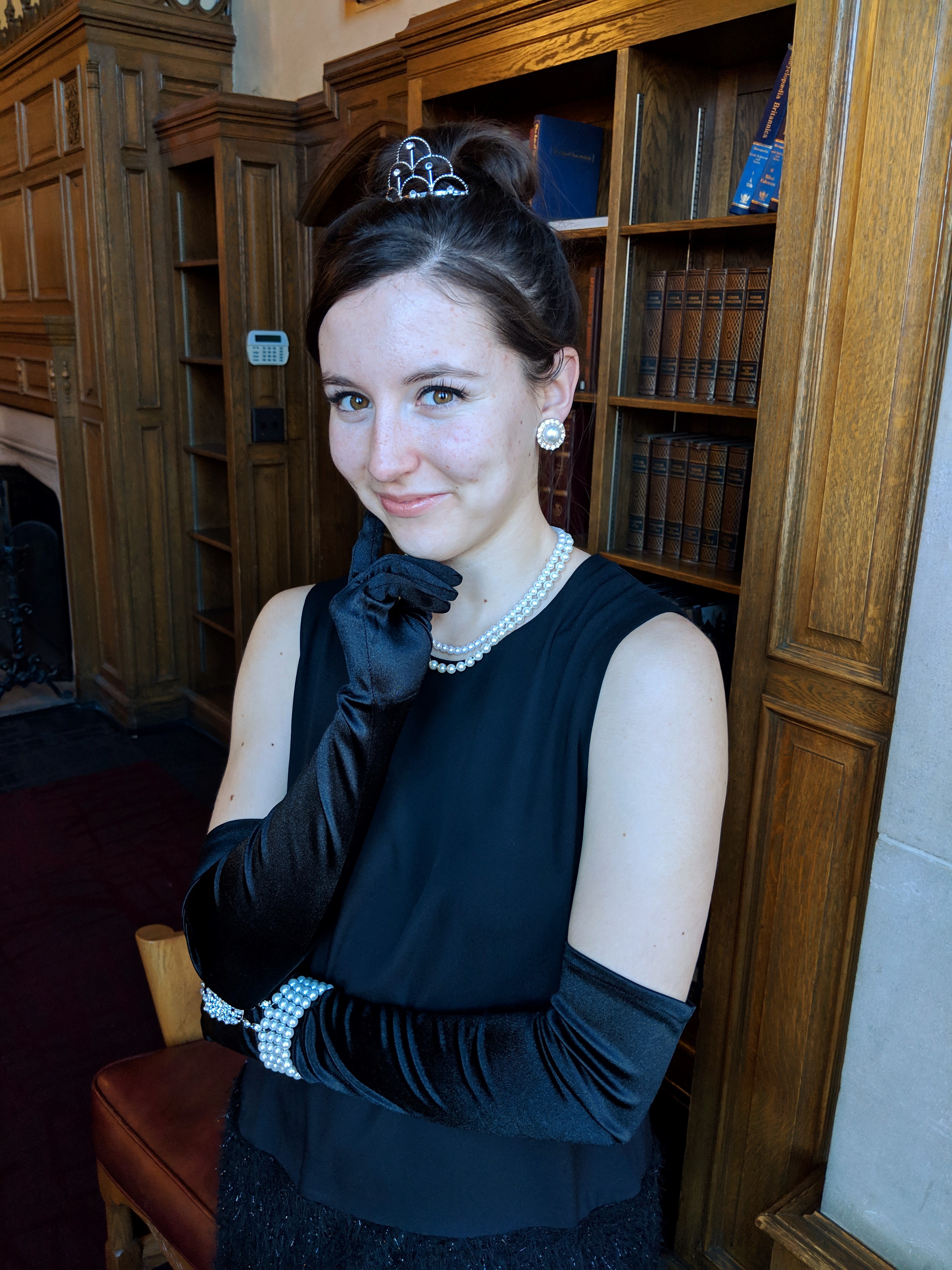 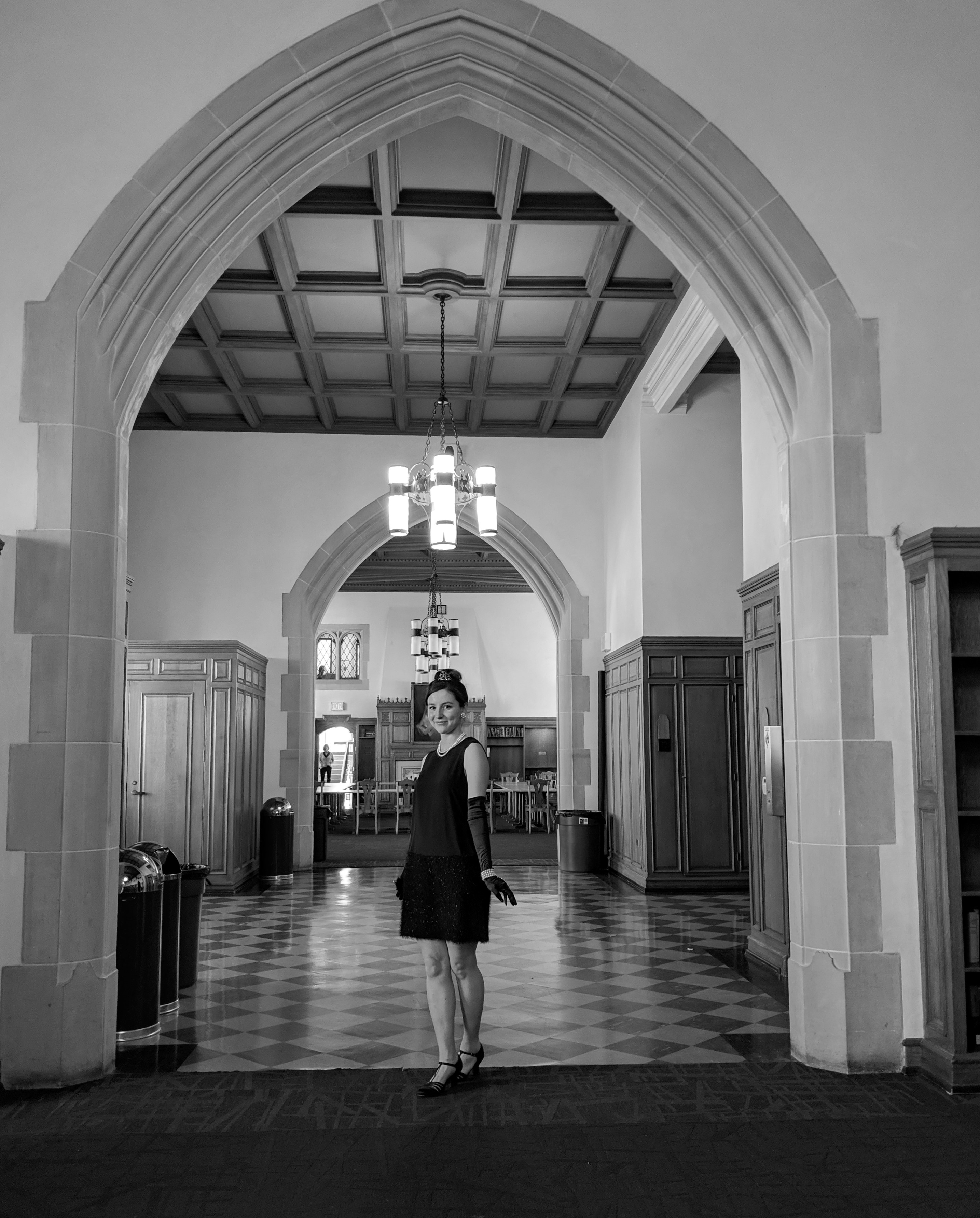 I also wore my black t-strap heels, seen many times on the blog, but nice black shoes would work either way—you can’t see much of Audrey’s footwear in the iconic photos. I bought the black gloves and fake cigarette holder off Amazon; the rest of the materials I already owned. I added some pearl necklaces, wore clip-on pearl earrings from Charming Charlie, and styled the same pearl ring and bracelet piece as seen in my flapper costume.

As for makeup, I kept the look simple and elegant just like Audrey: black liquid eyeliner, mascara (I used the Lancome primer and Clinique Chubby Lash mascara as reviewed on the blog earlier in the year—it’s my favorite for a dramatic look!), and some nude lip gloss. 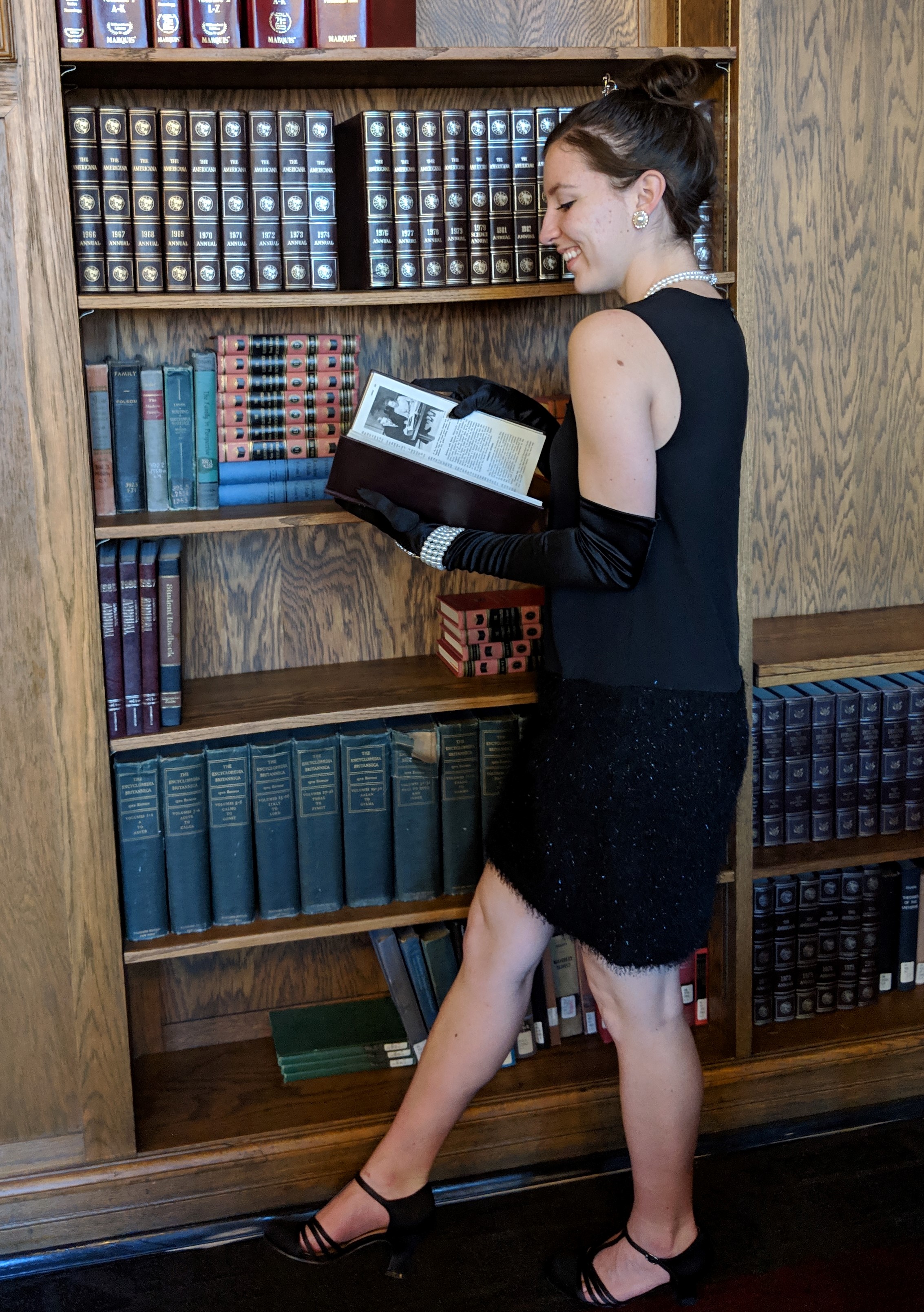 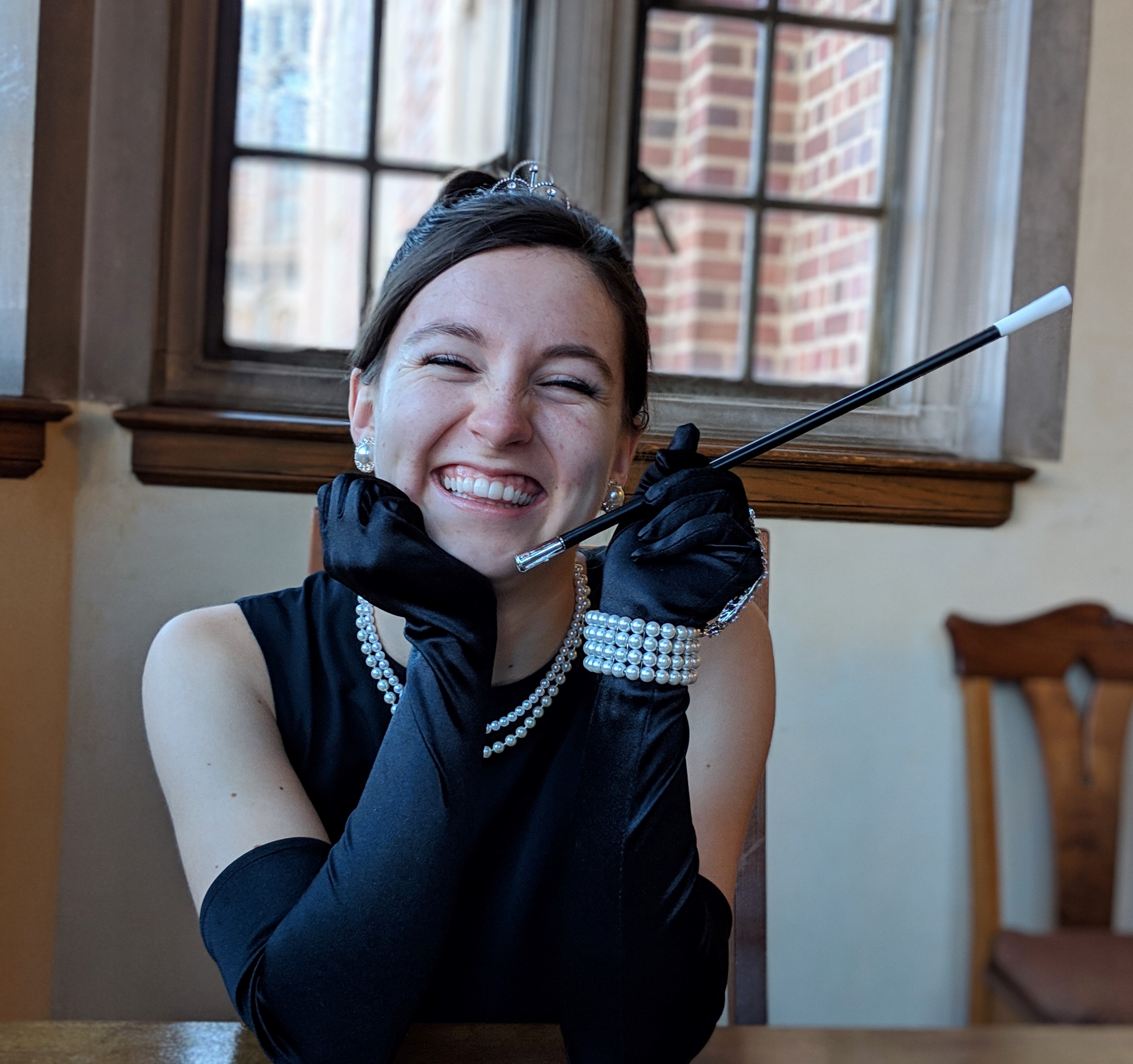 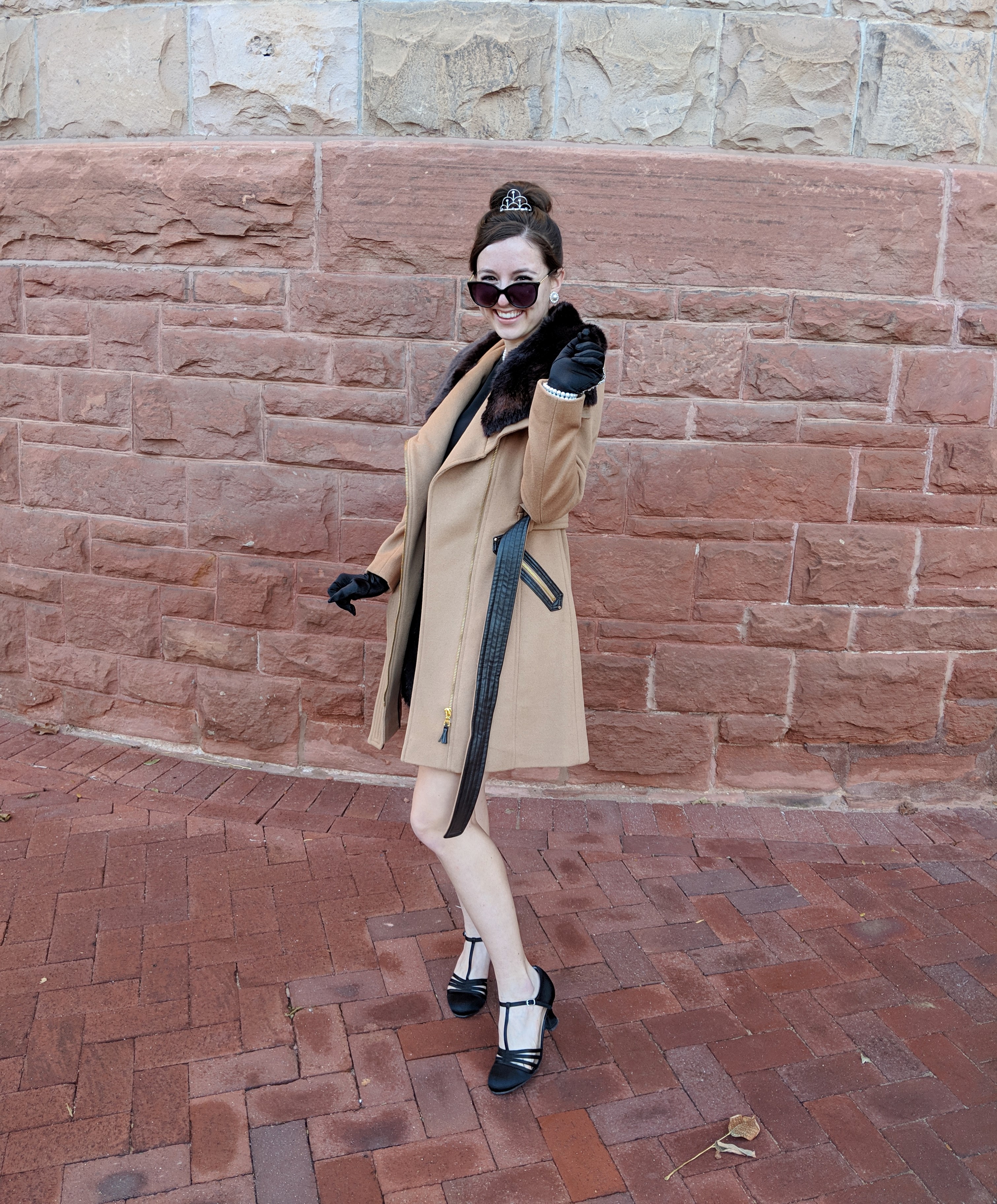 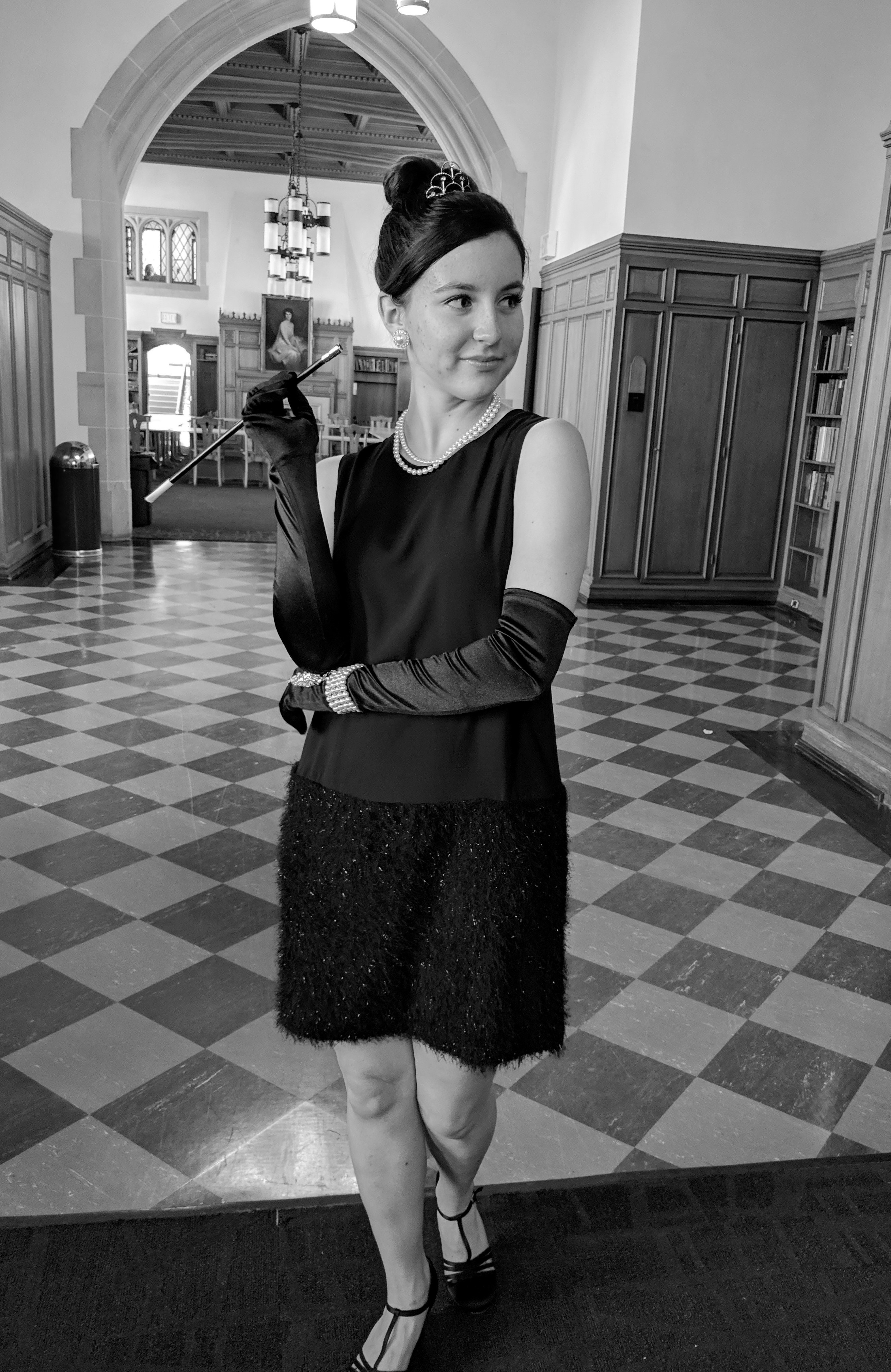 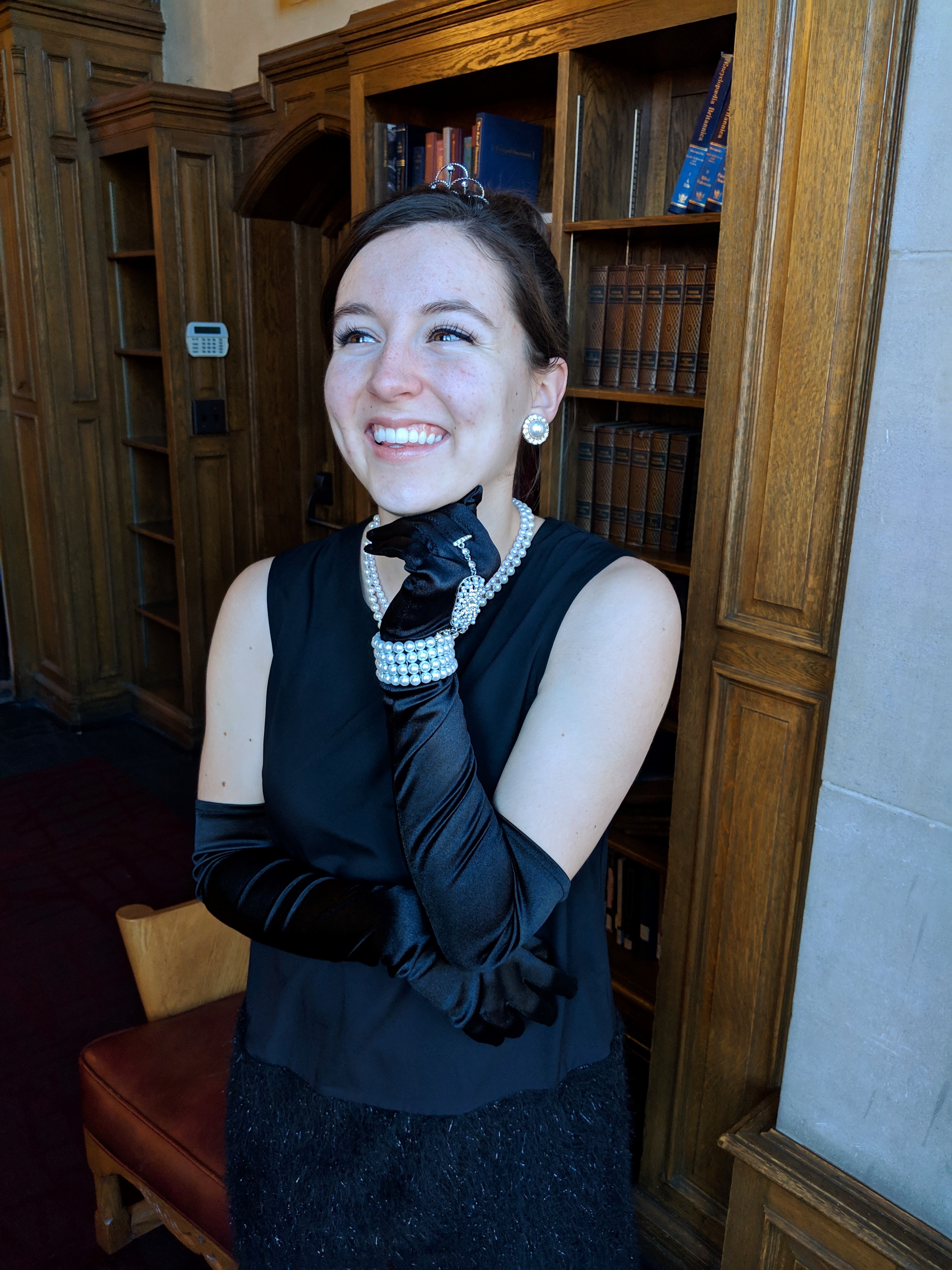 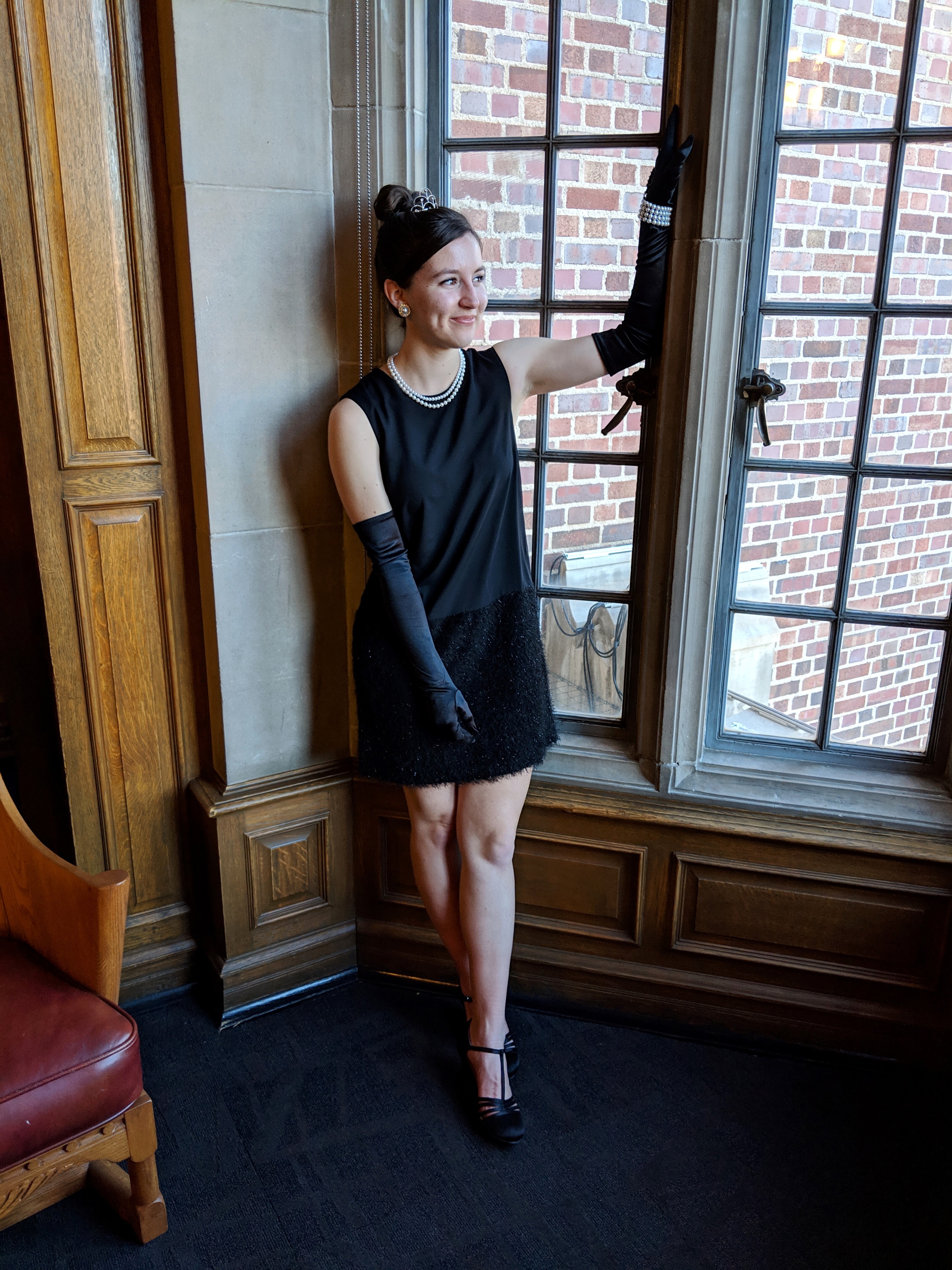 I was concerned about pulling off Audrey’s gorgeous hair-do, especially with shorter hair, but it didn’t turn out as difficult as I expected. Mine isn’t quite the same level of elegance and sophistication; however, I was quite pleased with the result.

I pulled as much hair as possible into a ponytail really high on my head, being sure to leave out a few strands at the front. I took those strands and used a little rubber ponytail to tie them together at the nape of my neck, to frame my face, and then used bobby pins to secure the loose ends against my head. I had to use a lot of pins to hold up all the shorter hairs that didn’t fit in my ponytail. I then took the ponytail, looped it through one more time, and stopped before pulling it through all the way (so there was an awkward bun). Taking the loose ends of that bun, I pinned them around the ponytail to cover up the hair tie. Then I fanned out the bun itself and pinned the ends to my head. Ta-da! If that was hard to follow, you can check out this very similar floppy bun hair tutorial. 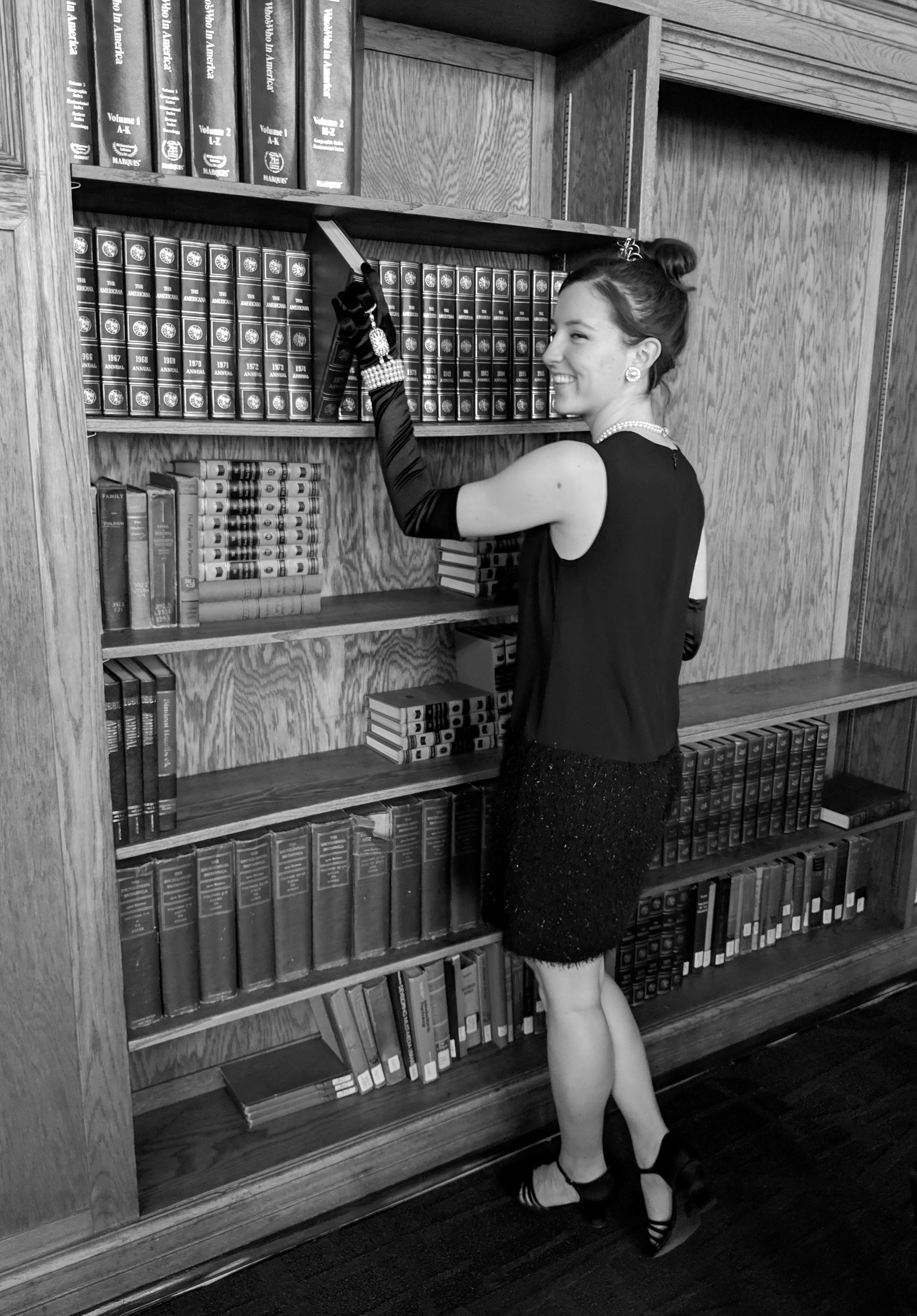 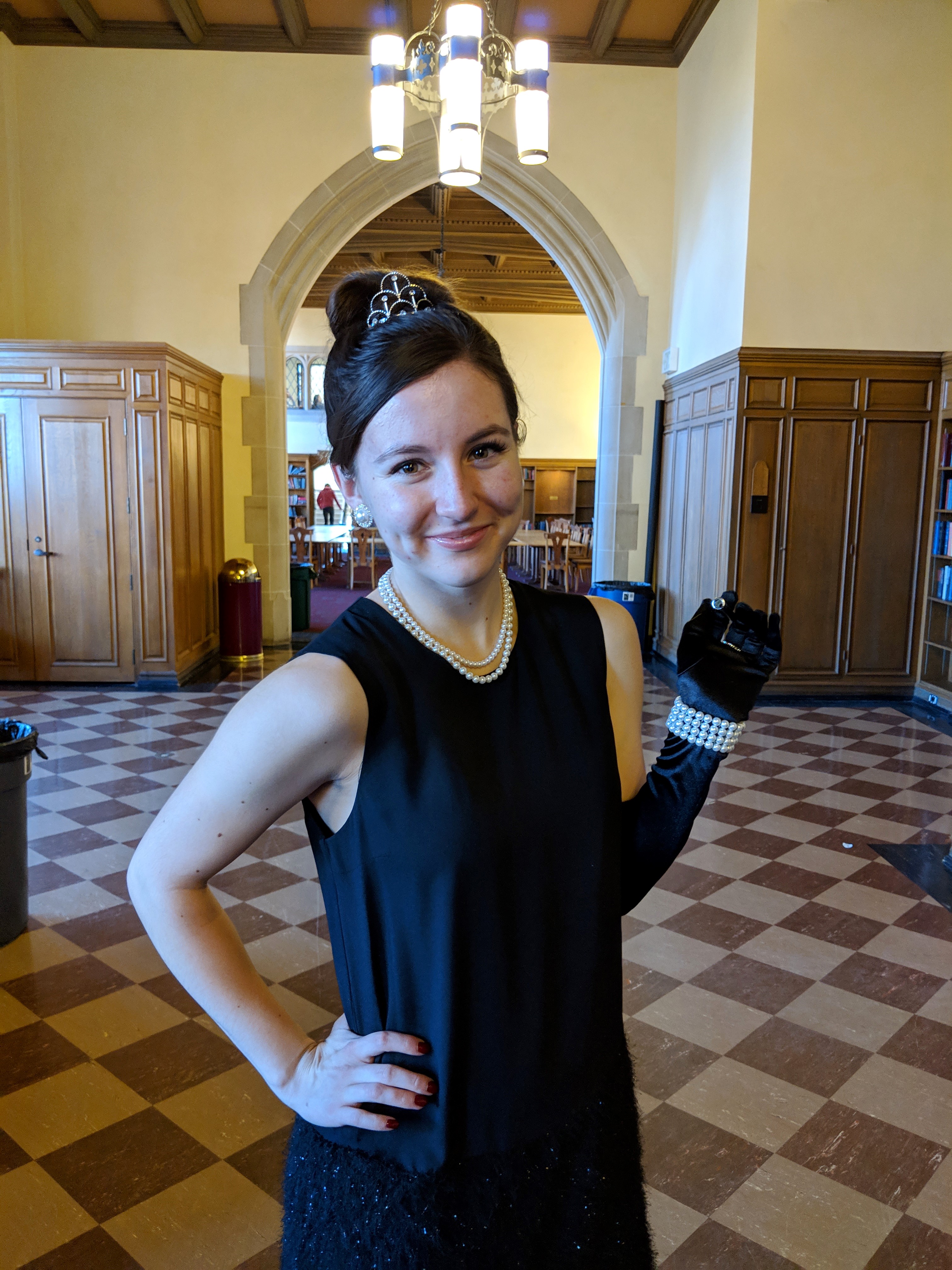 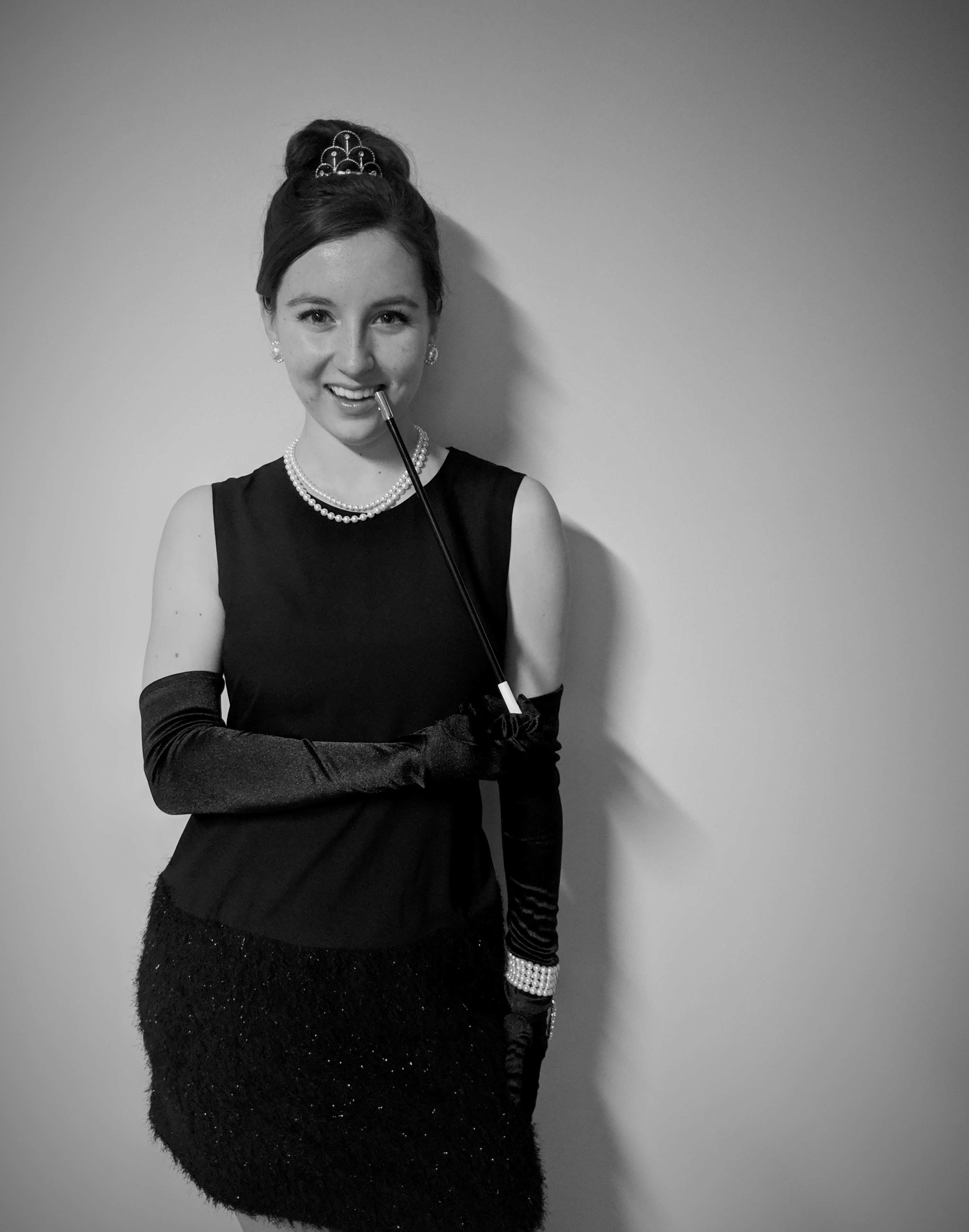 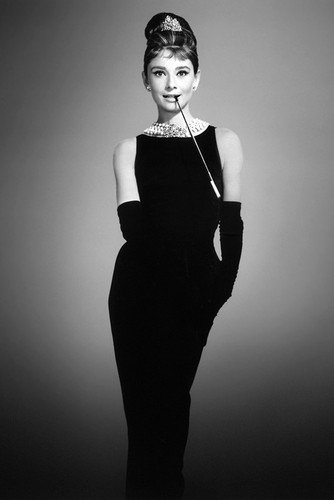 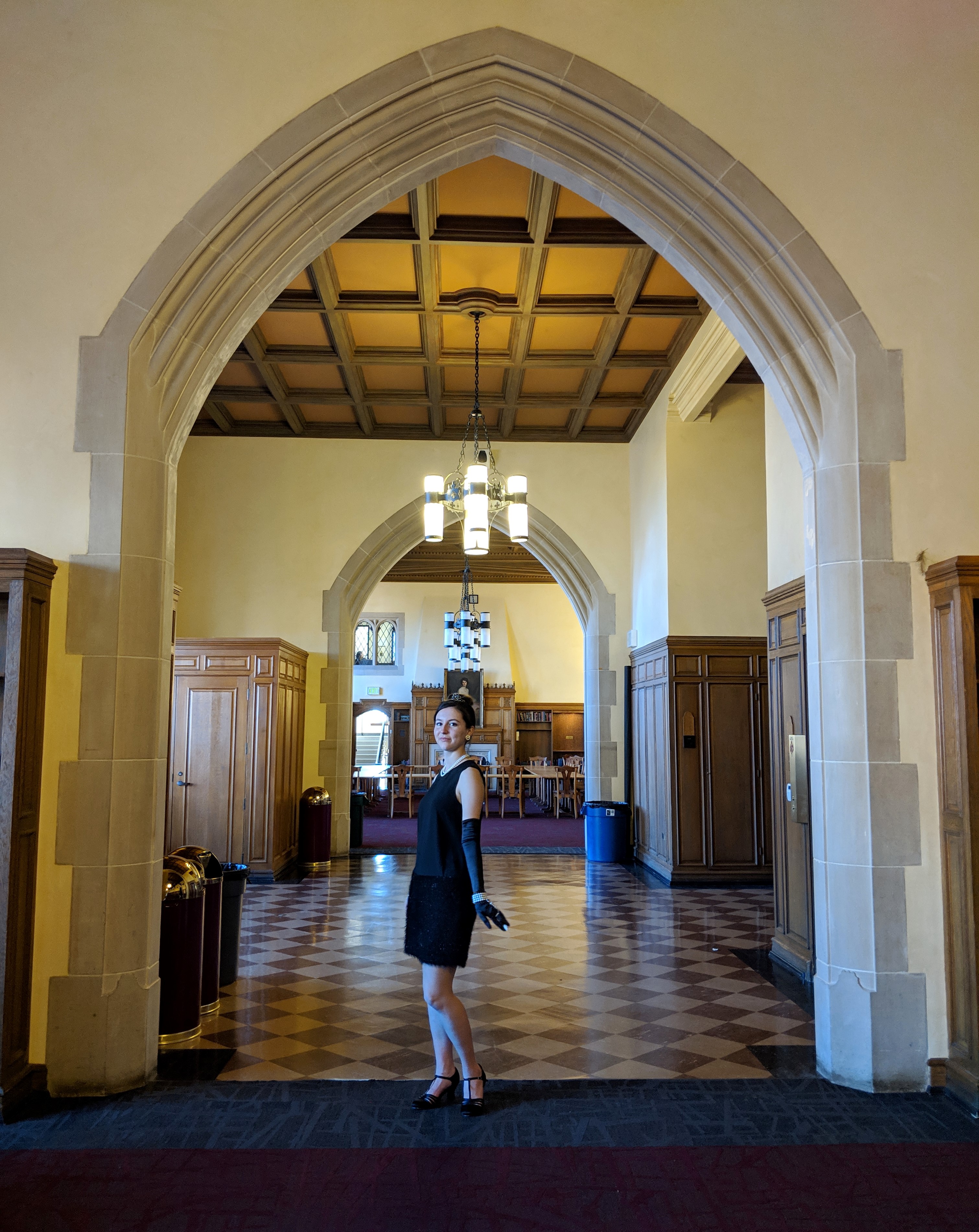 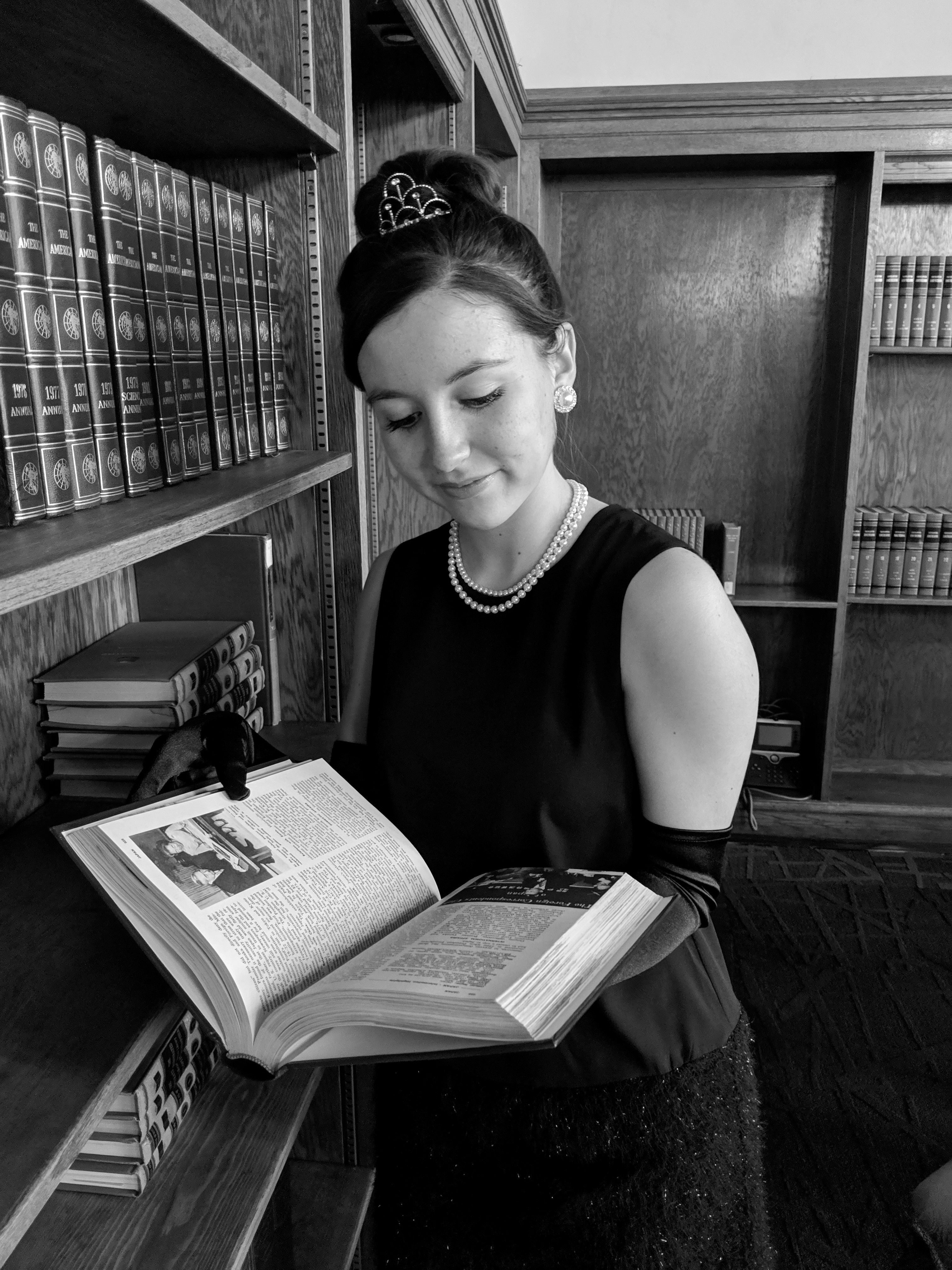 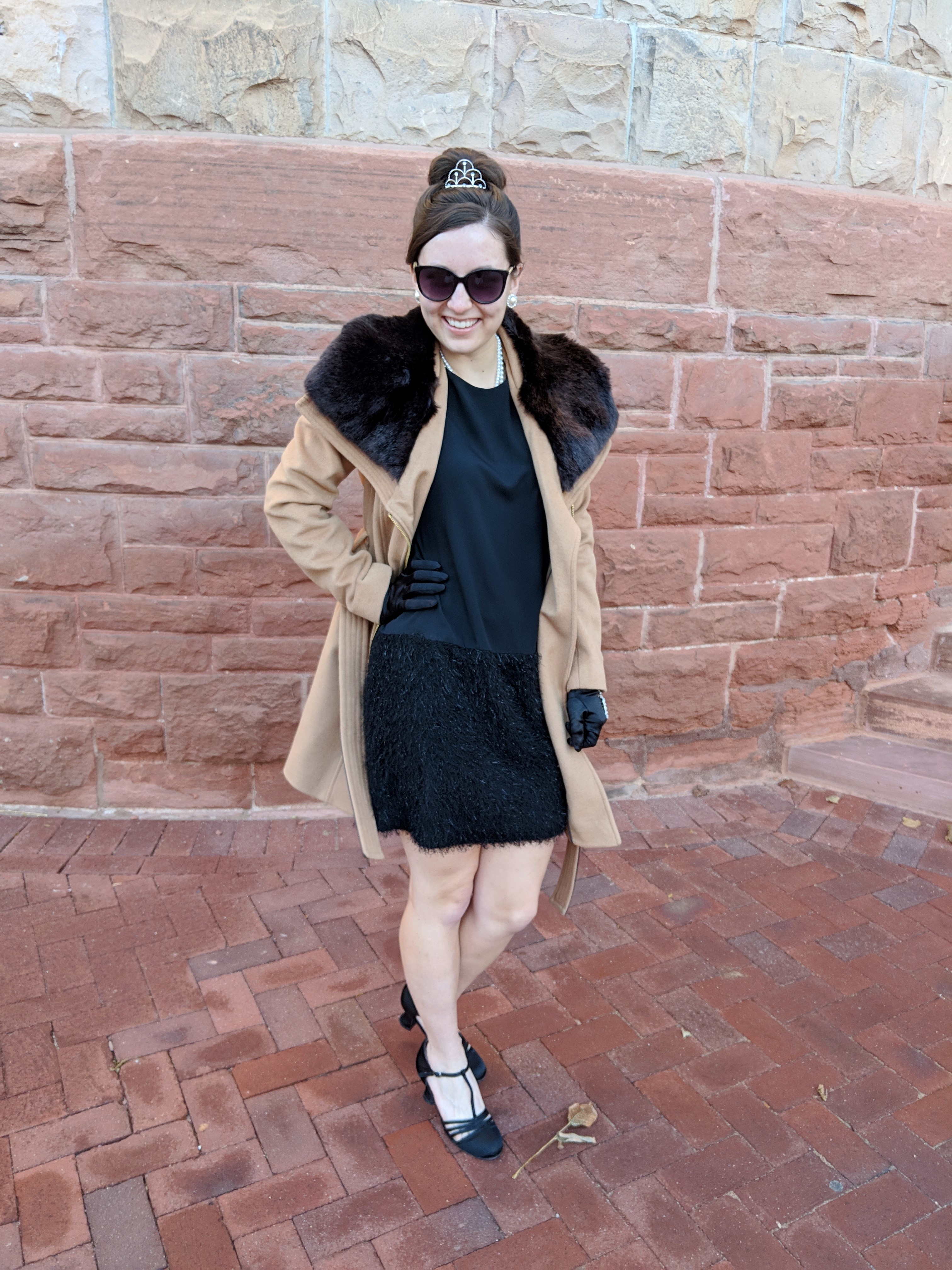 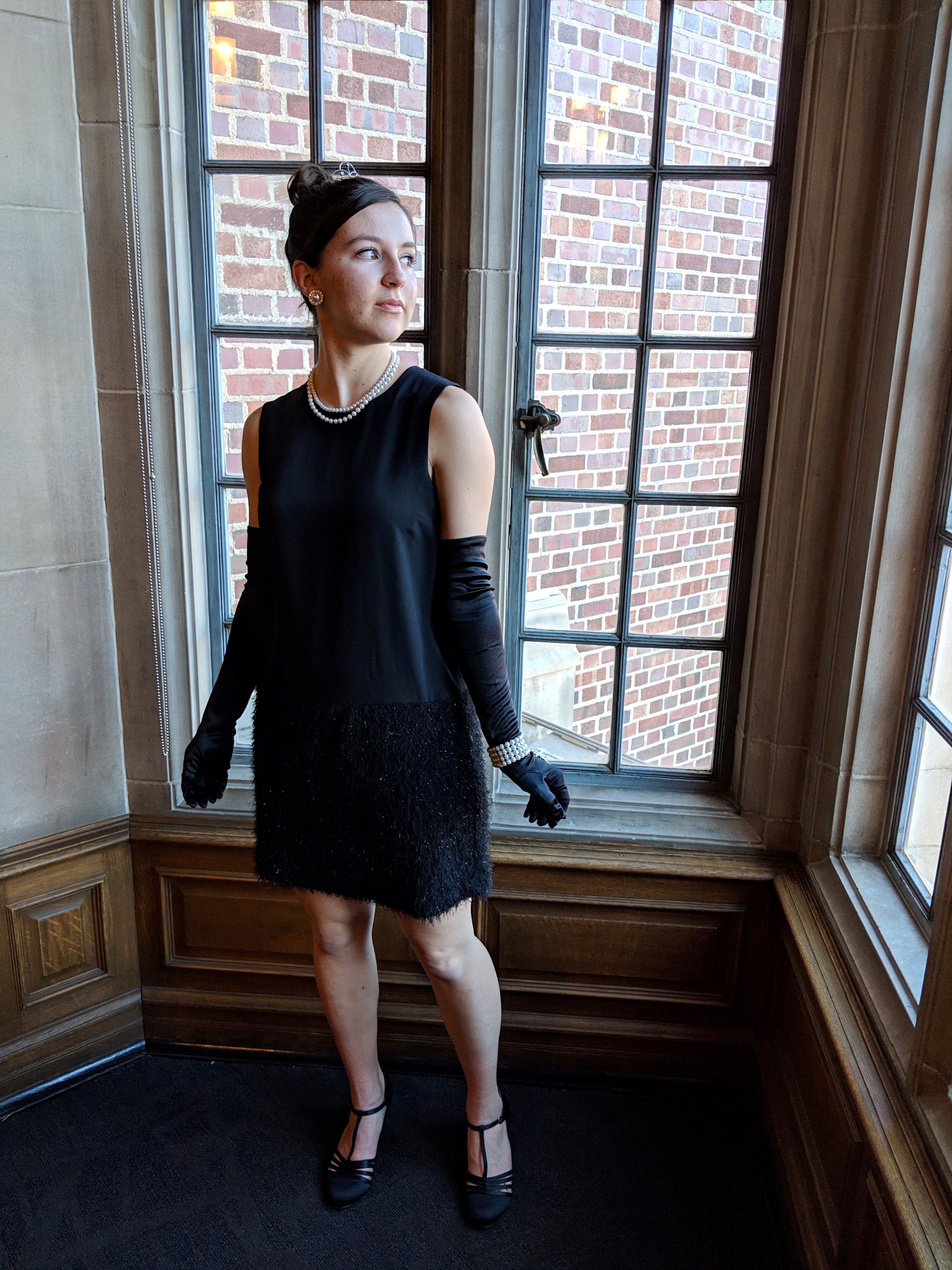 Of course, no Breakfast at Tiffany’s look would be complete without a tiny tiara. I’ve actually had this tiara for as long as I can remember and had my mom ship it to me from home specifically for this outfit.

Once, my family was invited to speak at an auction and I was very young at the time, probably 6. I couldn’t contain my excitement about the opportunity to wear a fancy dress, and I asked my mom before the big night if I could wear this tiara. When my family went on stage to speak, the hostess told the crowd this story and asked me how my mother responded to the question…I shouted smilingly into the microphone, “NO!” In my memory, it was a very aggressive “no,” but I’m pretty sure the audience laughed. That was my one claim to fame. 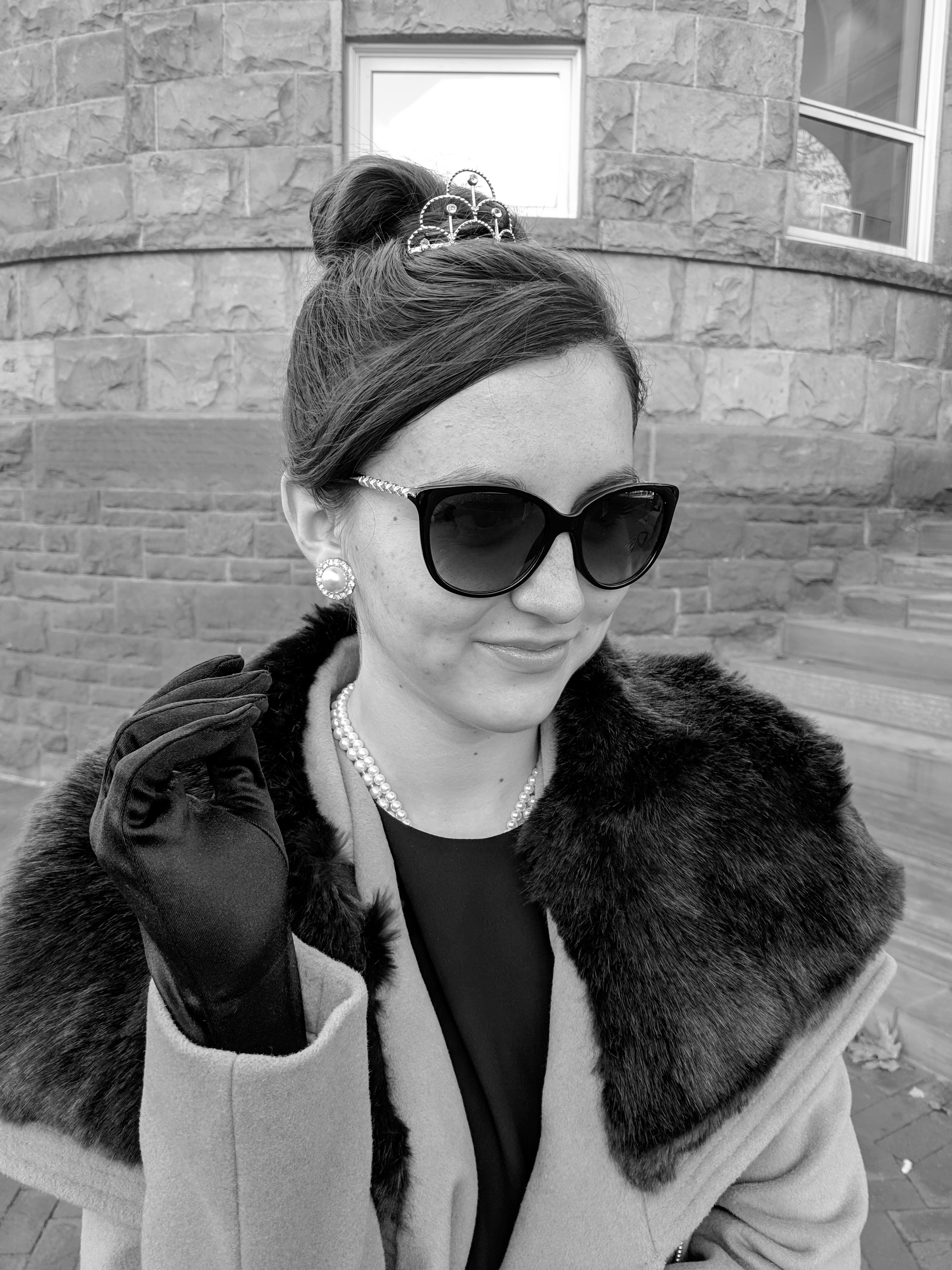 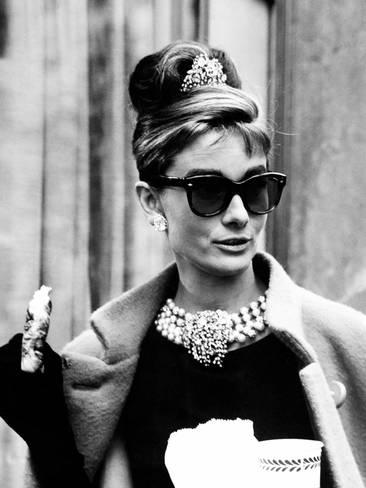 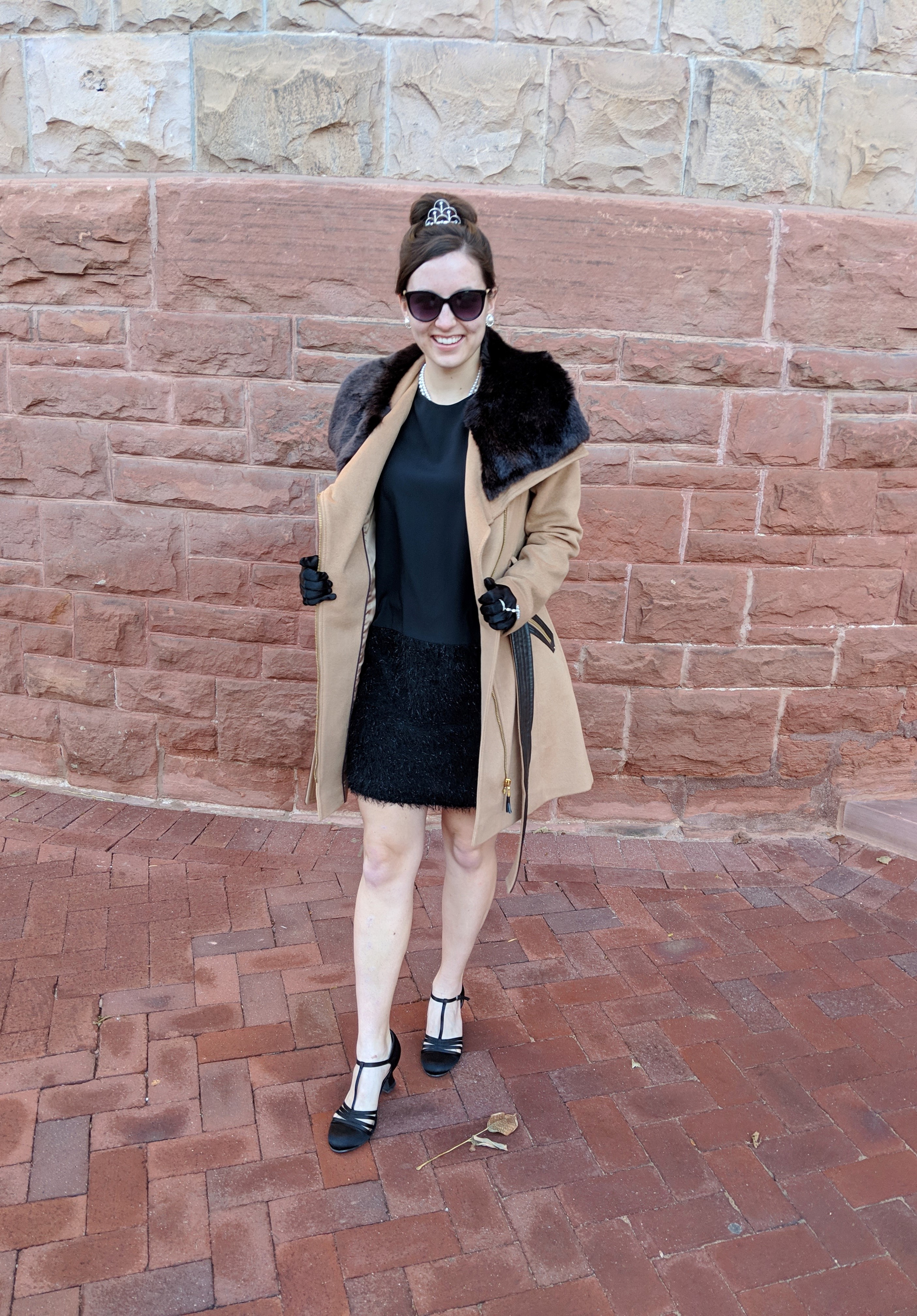 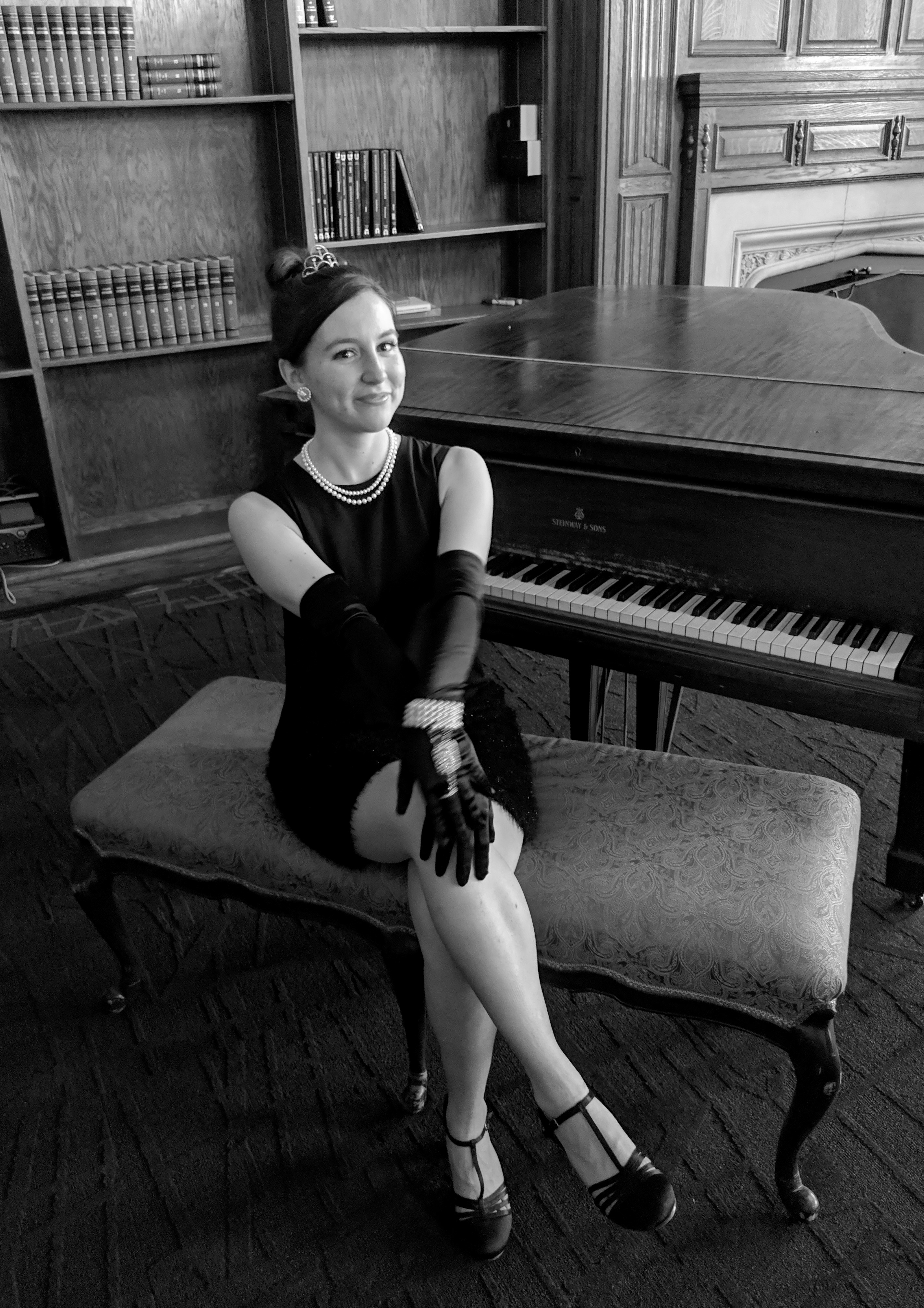 As you probably already guessed from these photos, I had a great time dressing up yesterday. I wore this outfit all day and to all my classes. I thought more people would’ve worn costumes, but I think my roommate and I were the only ones—and I didn’t care! It was such a blast, especially exploring an old building on campus in which to take these pictures and trying to recreate Audrey’s most iconic photos. This may be my favorite photoshoot ever! 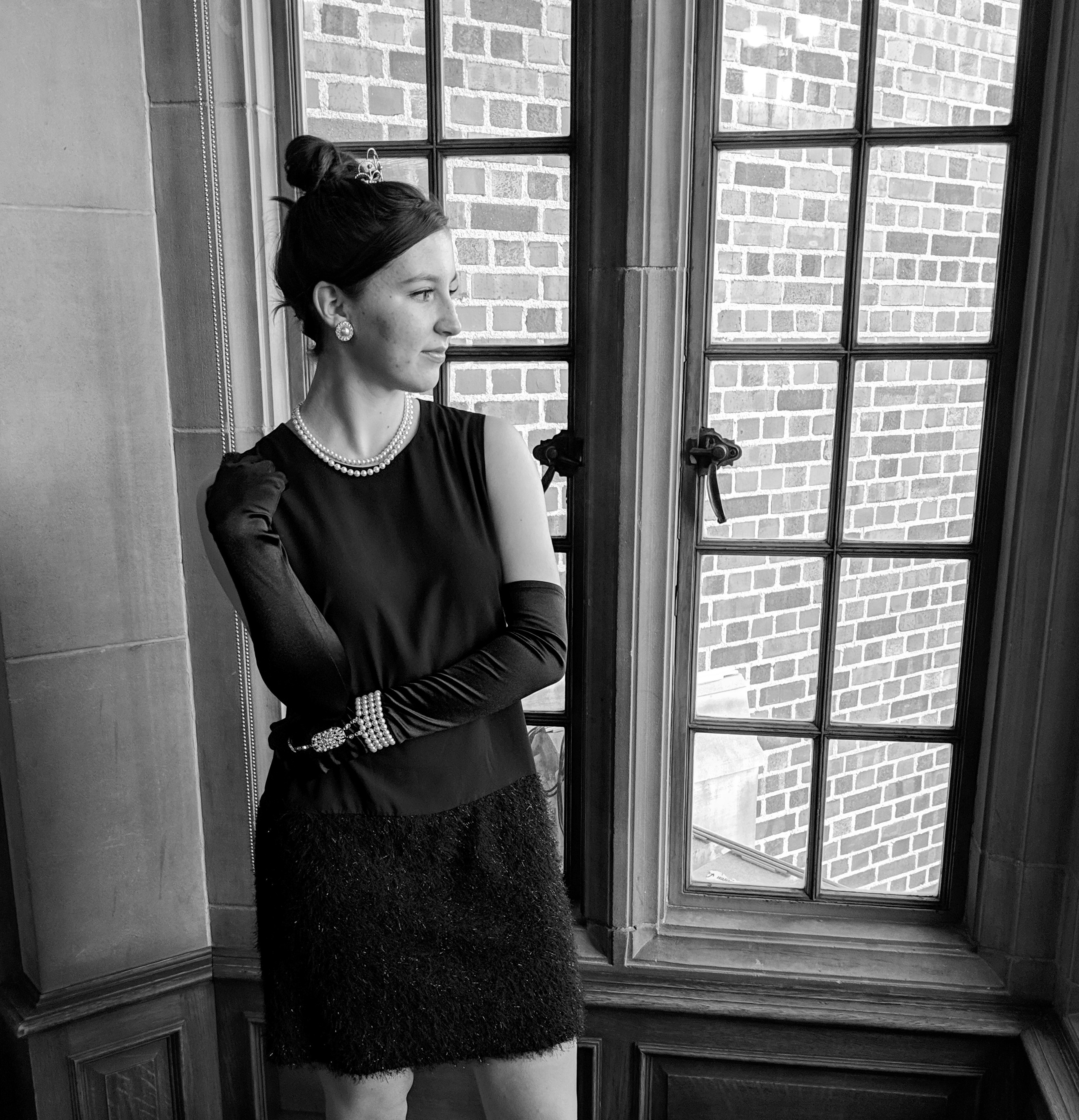 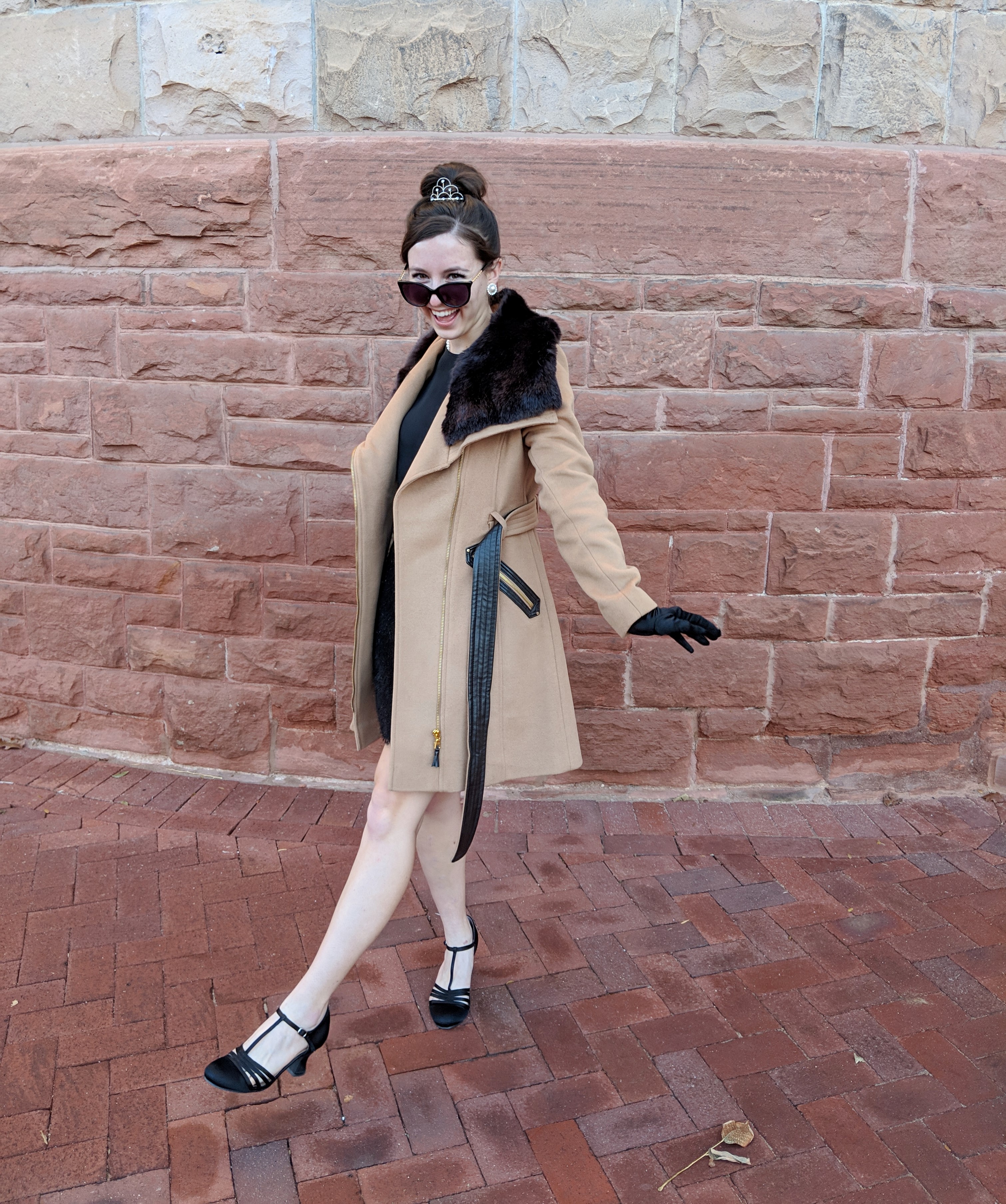 How was your Halloween?! I’d absolutely love to hear about your costumes, and happy Dia de los Muertos to anyone celebrating. My roommate and I were going to go out last night but decided to stay in and watched The Conjuring instead…First scary movie I’ve ever seen and it was terrifying!

And for a little Thursday motivation to finish off the week, here’s an Audrey Hepburn quote about beauty:

“For beautiful eyes, look for the good in others; for beautiful lips, speak only words of kindness; and for poise, walk with the knowledge that you are never alone.”

Cheers to being classy and fabulous!