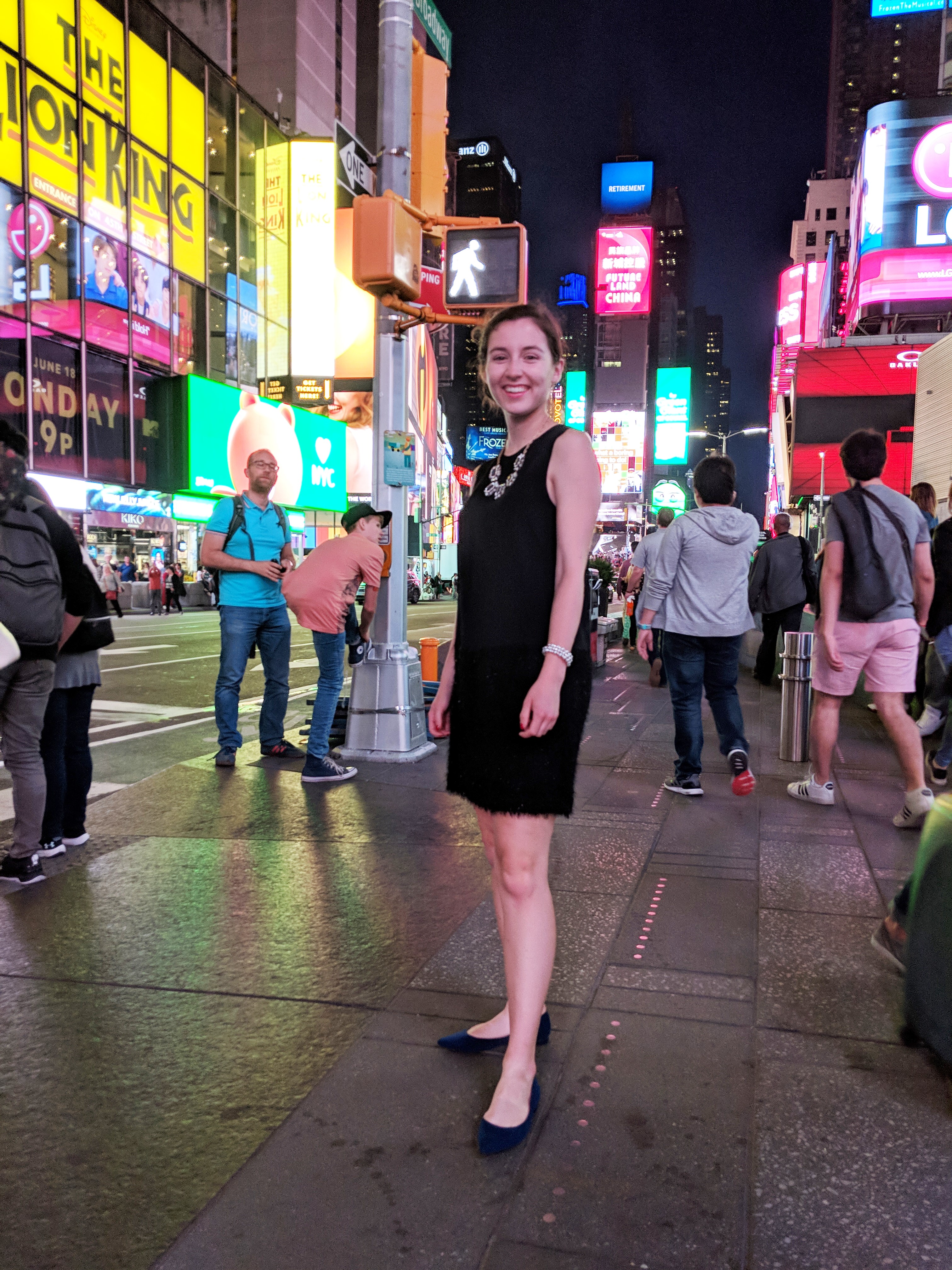 As promised in my NYC Travel Guide, I am sharing a whole post about my Broadway experience. Seeing a play on Broadway has been on my rainbow, color coordinated bucket list for a very long time. It’s not that I’m super into theatre or a play-buff, but it’s just one of those really iconic things to do. I was beyond excited to finally do it while in New York! 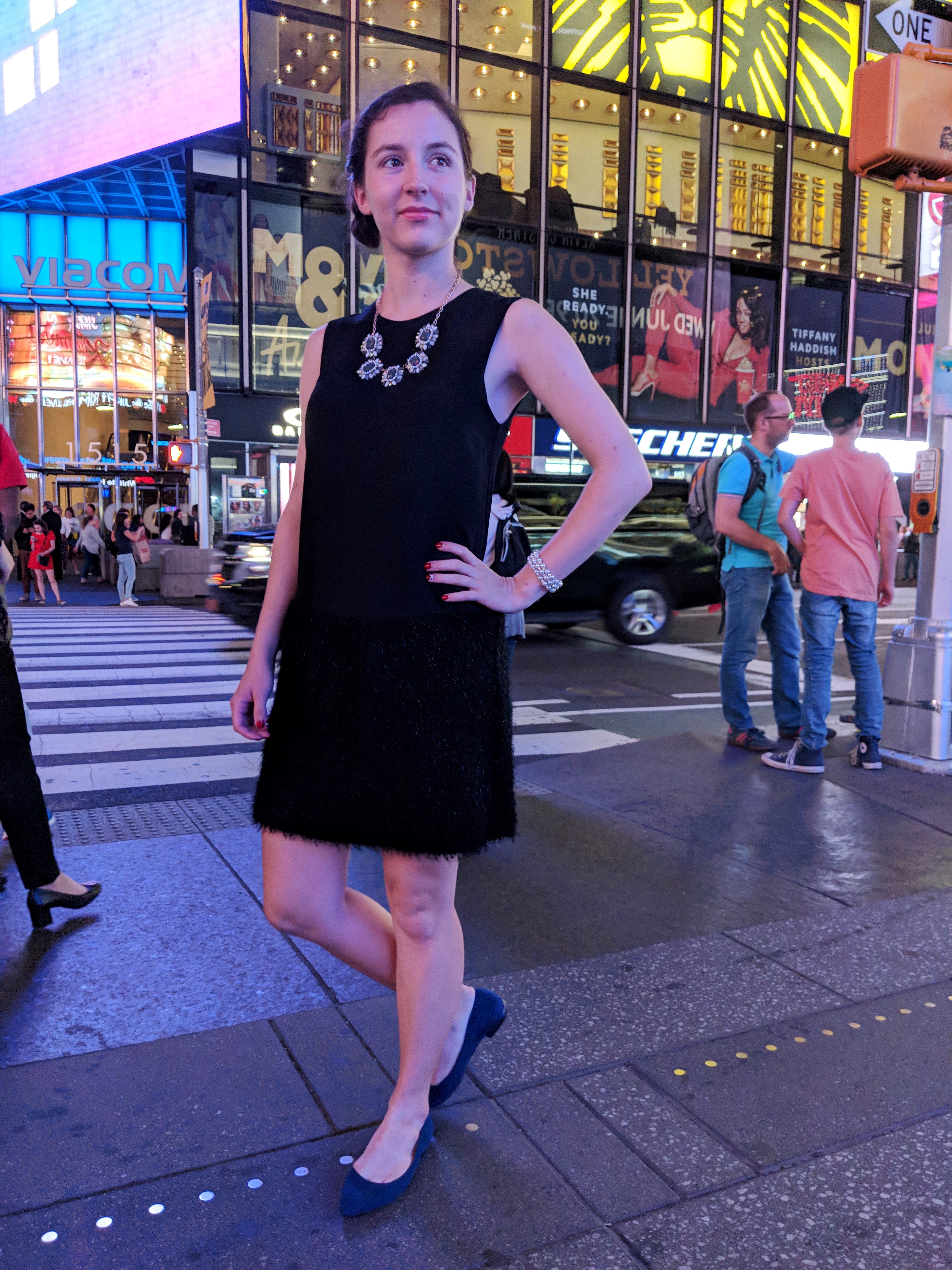 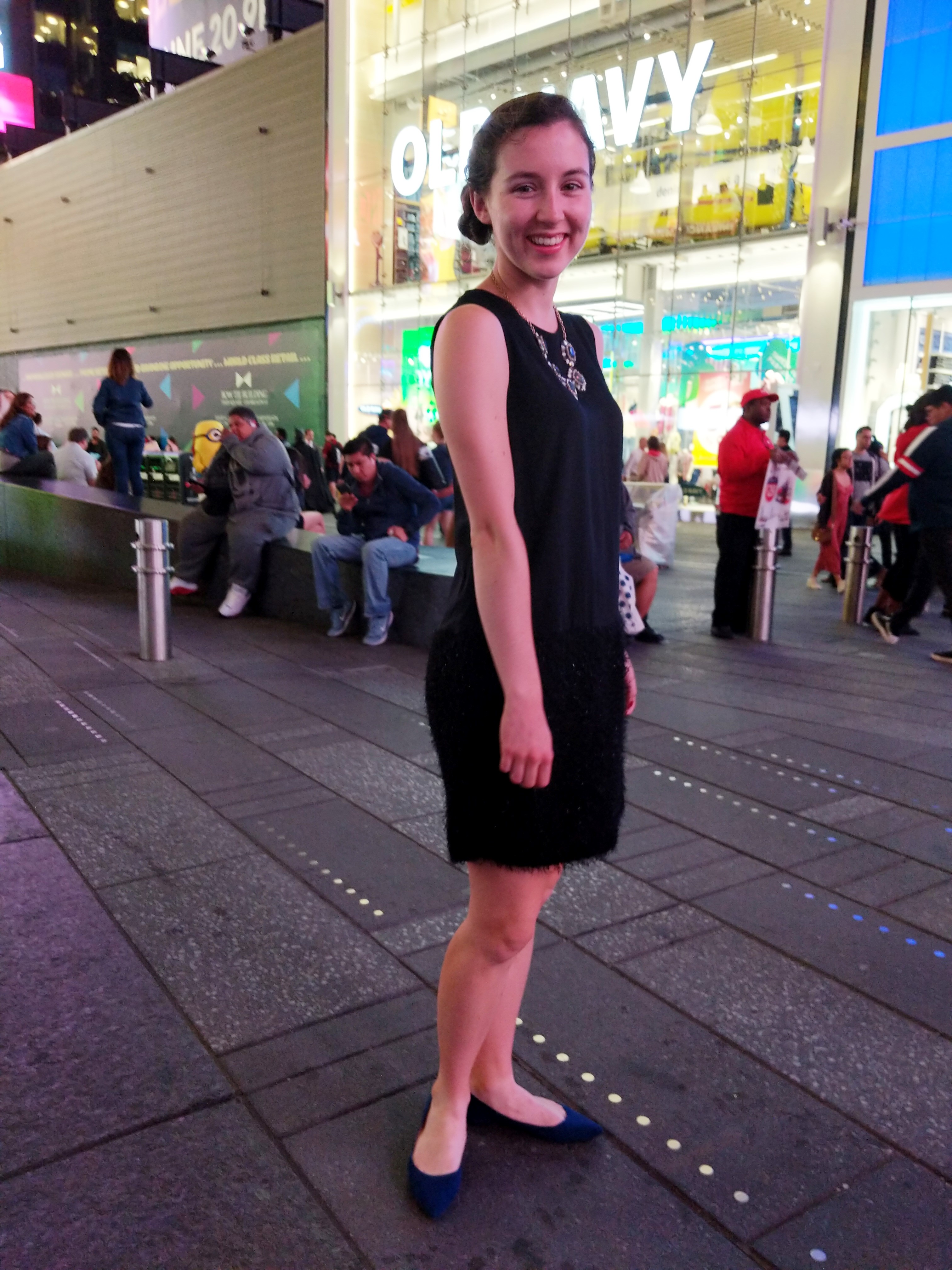 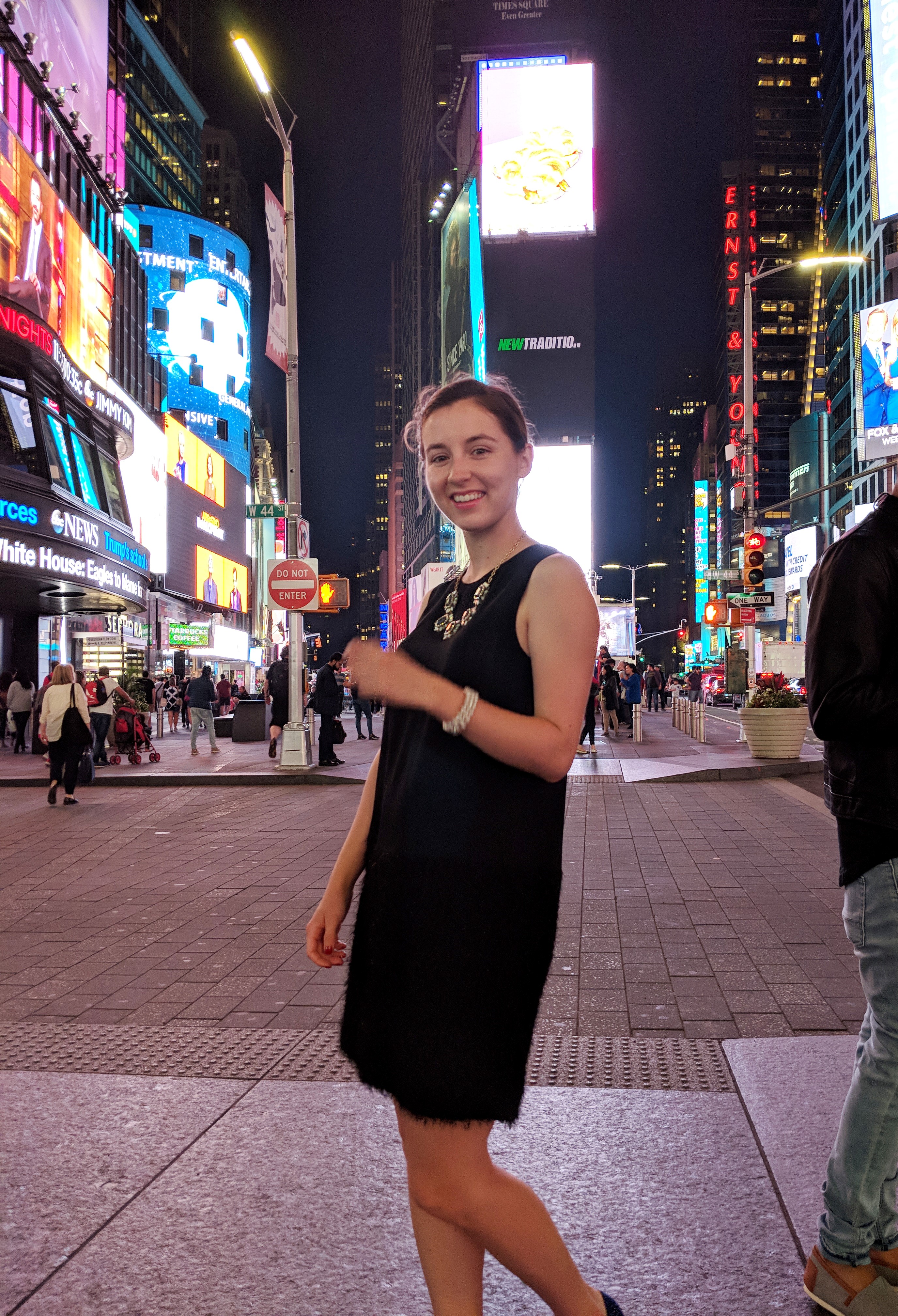 My mom bought our family tickets to see Edward Albee’s “Three Tall Women”. The play is about one woman’s life, told from the varying points of view of herself at different ages (a naïve 20-something year old, a hardened and blunt 50-something year old, and an apathetic 80-something year old). While Broadway is very popular for its musicals, especially shows like “Hamilton” and “Dear Evan Hansen”, my mom wanted to see a drama to experience Broadway at its core. While I found the play very sad, it was a fantastic performance! It went on to win multiple Tony Awards the week after we saw it.

When buying tickets, my mom said there were either 5 seats in the very last row for about $47 a pop, or 5 seats in one of the front rows for $200+ each. She decided not to splurge, and I would encourage you to do the same! Even though we were in the last row, it was more about the experience of Broadway. We were there, seeing a show, so it didn’t matter what seat we were in. The playhouse was quite small, like a lot of them, so even from the very back we could still see and hear well enough. My point is, buying Broadway tickets is like my philosophy on clothes: you don’t need to purchase the most expensive thing to still get what you want. 🙂 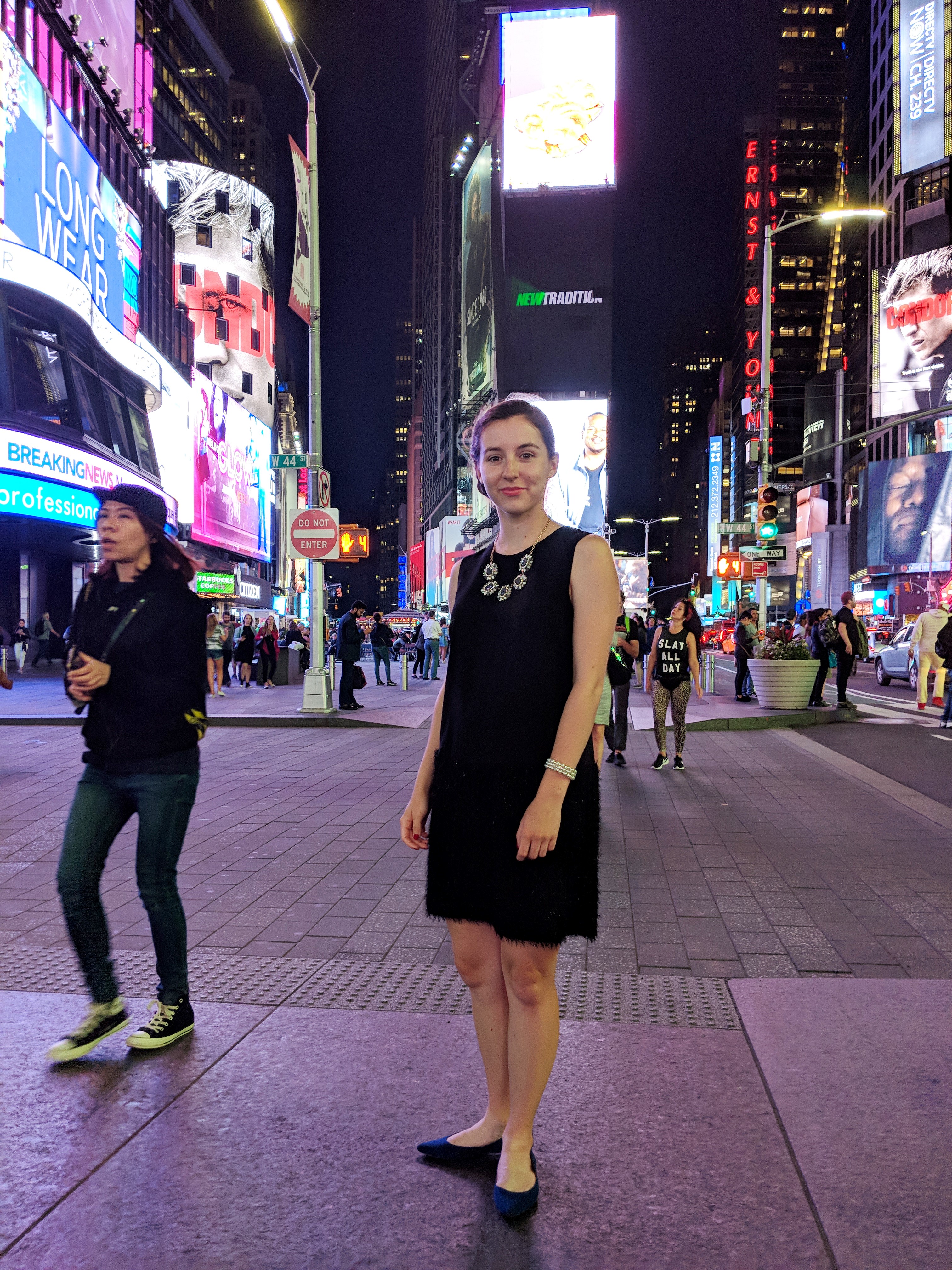 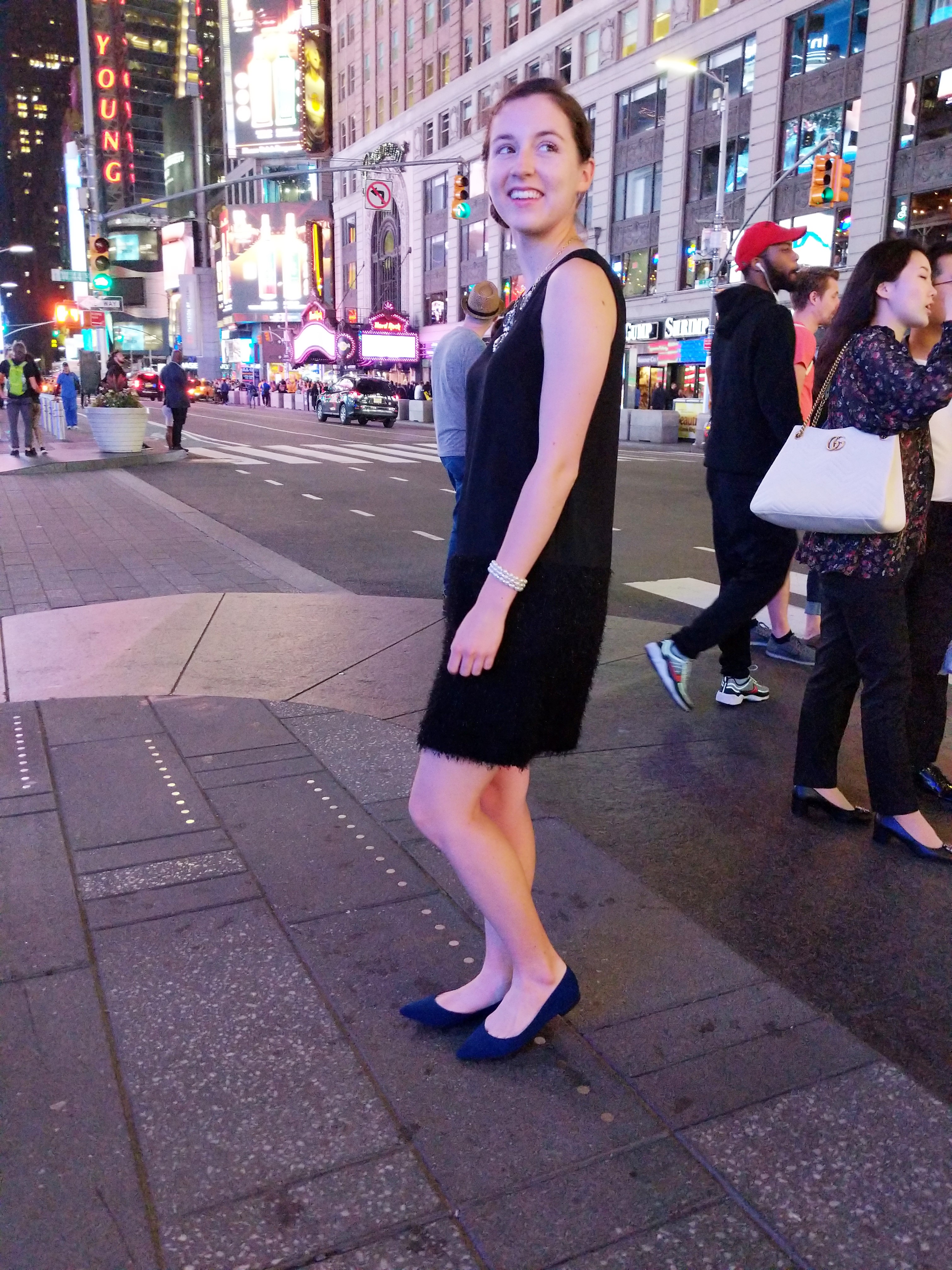 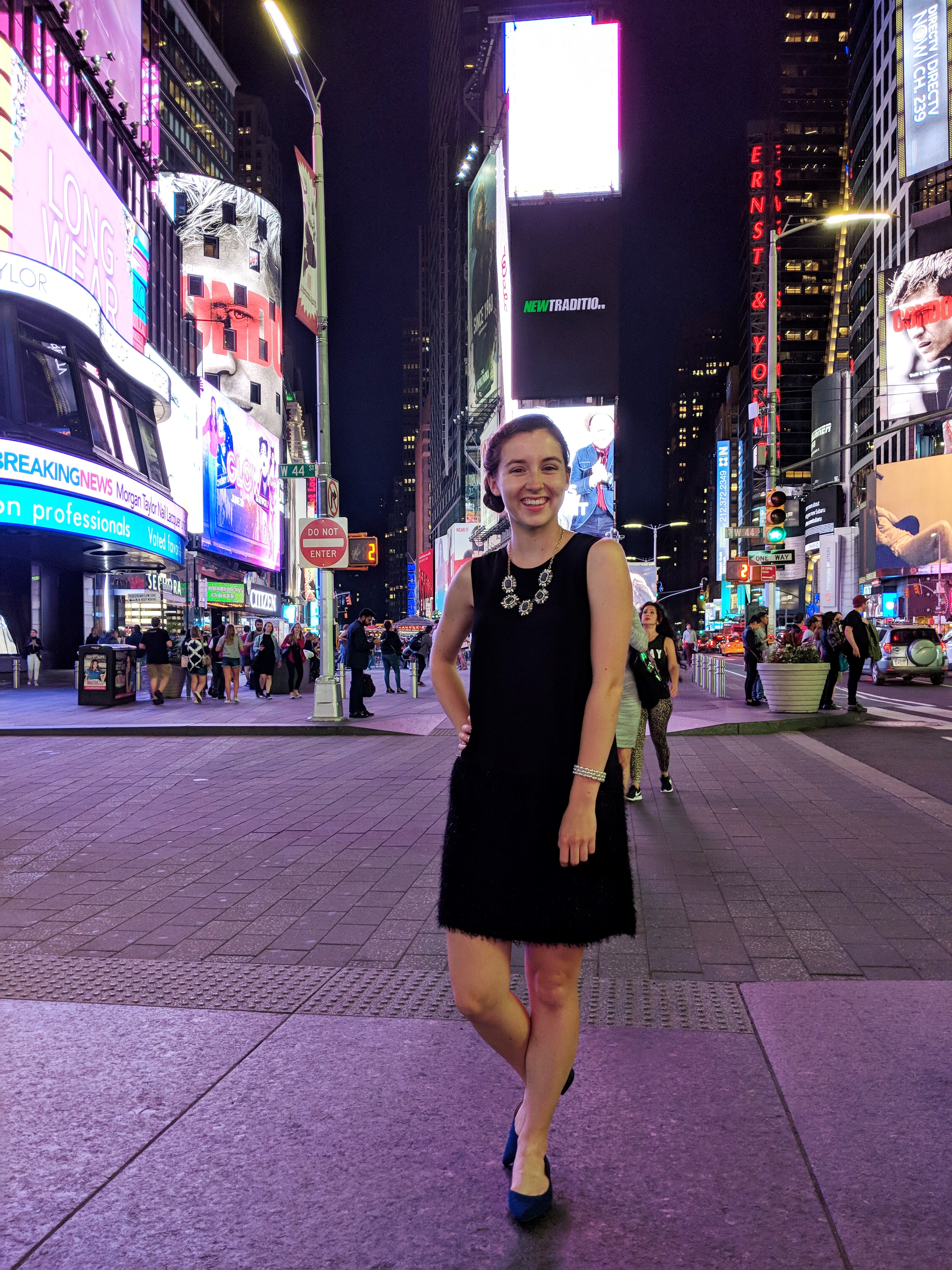 And speaking of clothes…I was most excited about the fashion of Broadway. I figured, it’s an excuse to dress up, right? I wouldn’t say I was disappointed with the fashion—some people did look very nice—it just wasn’t as fancy as I expected. Furthermore, I didn’t get to wear what I truly wanted. Unfortunately there’s this thing called plane travel, where I only take a carry-on bag, which means no room for an additional extravagant outfit (or extra shoes). I opted for this black flapper-style dress because of its thin material and paired it with blue suede flats that took up the least amount of space in my bag.

In a world where I could bring my whole closet, I would’ve loved to wear this red fringe dress again. I’ve only worn it once so far! I don’t know what shoes I’d pair it with, but I have some long white gloves from my grandma that would’ve been fabulous, along with a vintage beaded purse. Maybe that would’ve been too costume-y, but I wouldn’t care. Where else do you wear long white gloves?! Why, to the theatre, of course (said in a British voice with my pinkies pointing up)!

Either way, I still enjoyed the excuse to dress up a little, and seeing the play was amazing. As soon as I got home from my trip I crossed it off my bucket list! I didn’t realize that the Theater District was basically on top of Times Square, so as we walked back to our hotel from the playhouse, we snapped these photos and watched the screens light up the night sky. We could not believe how light it was! 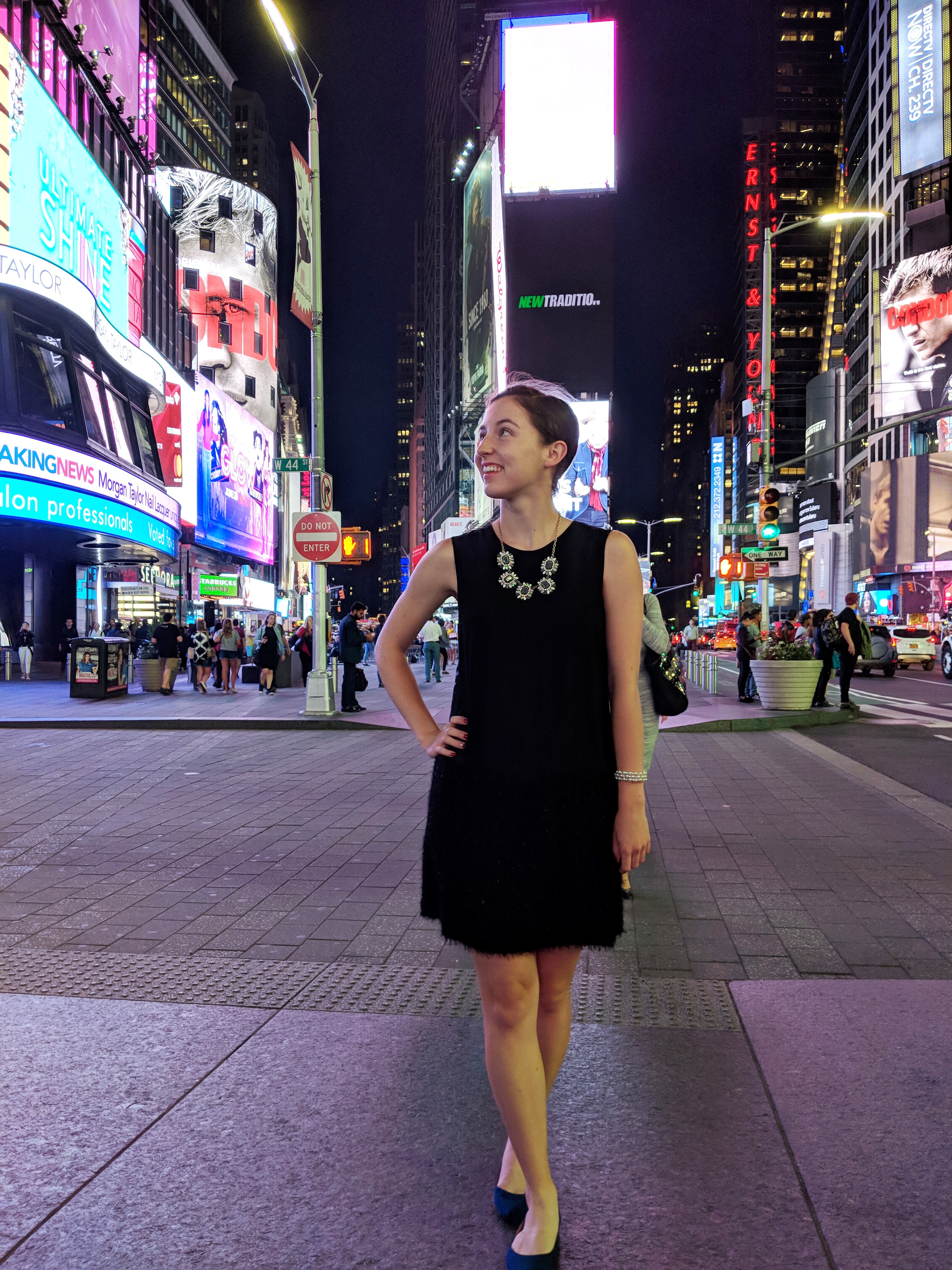 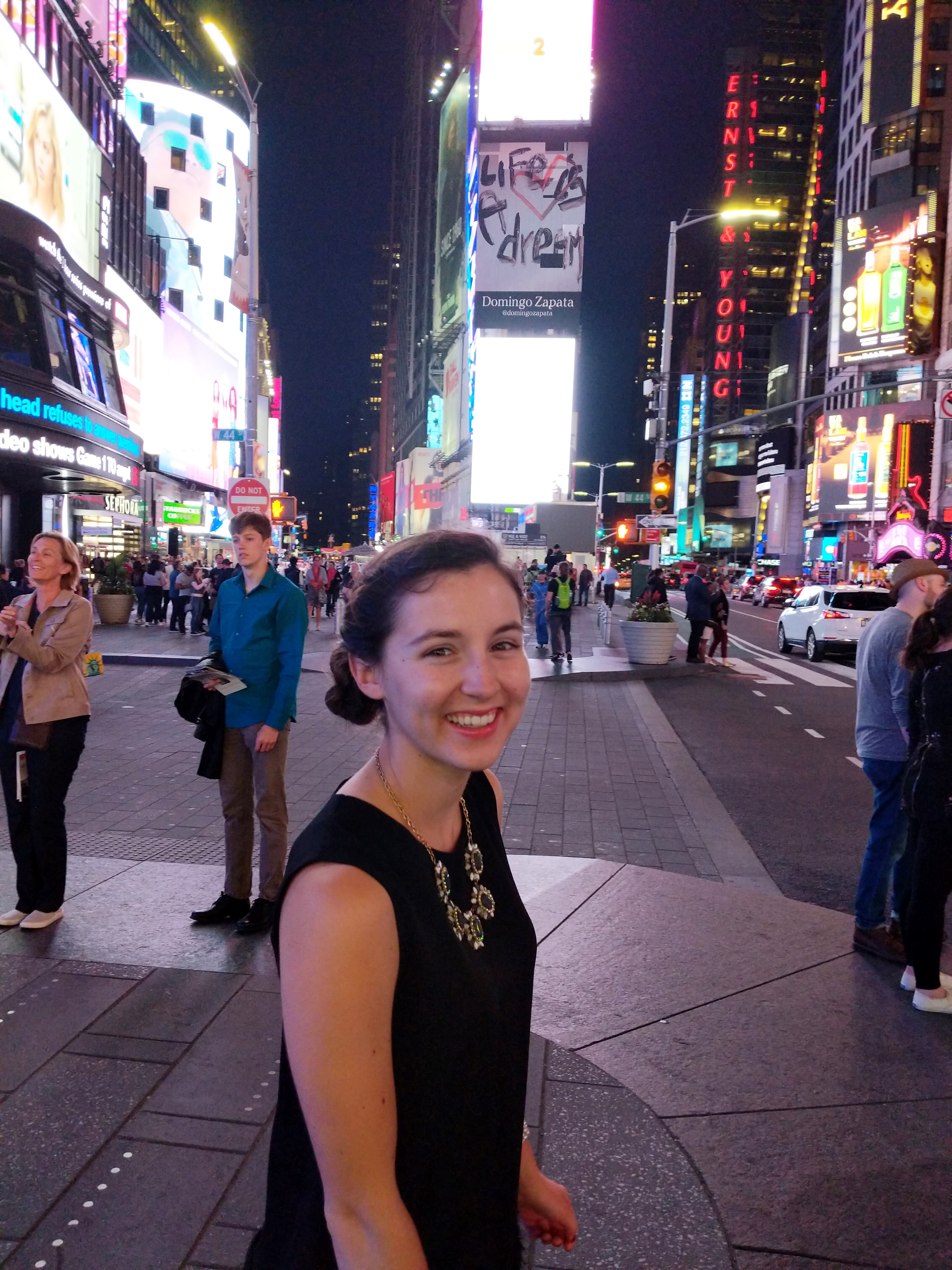 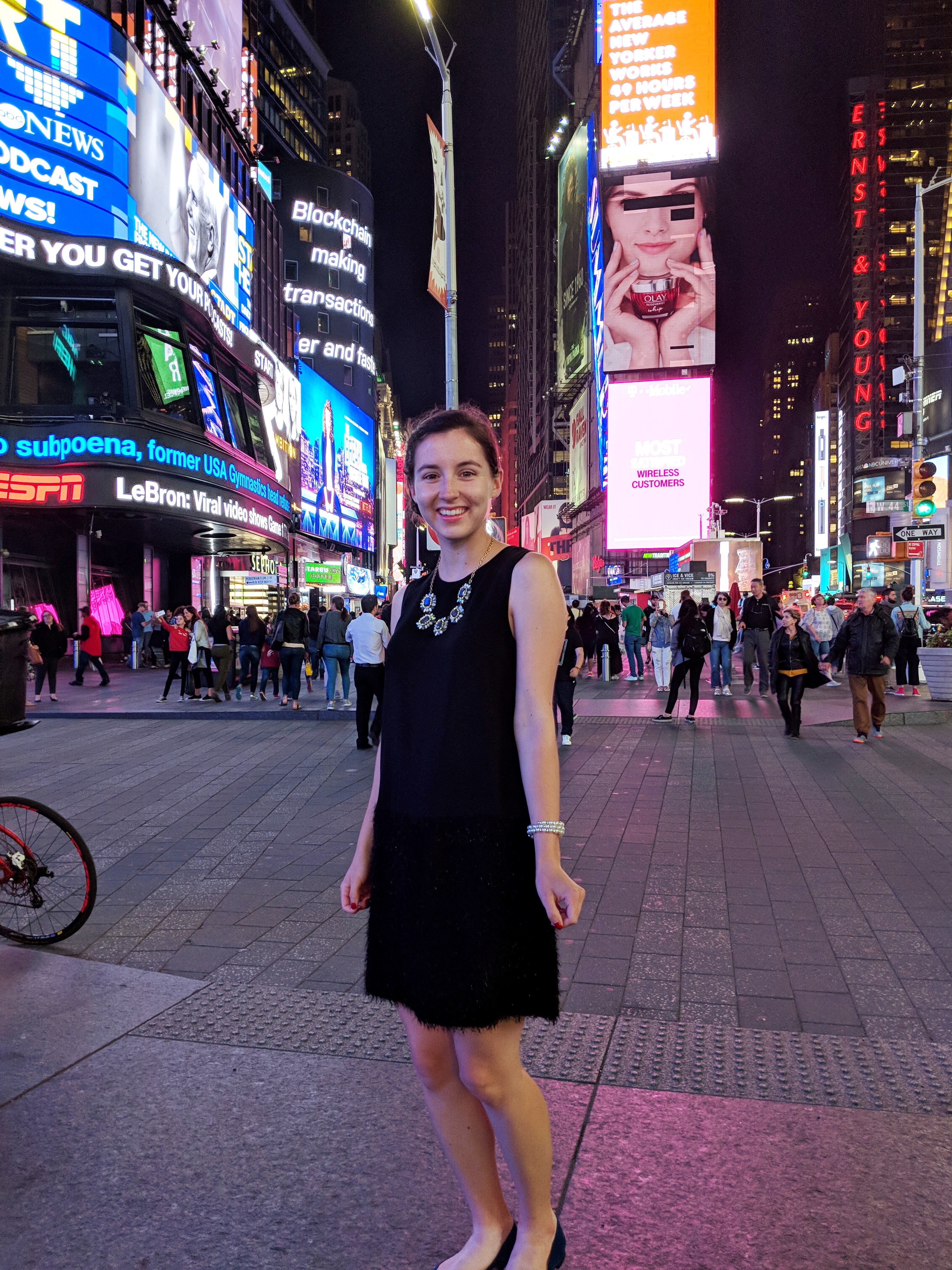 I think this was my last New York post, and you’re probably sick of hearing about that trip anyway. 😉 Nonetheless, if you have any further questions about Broadway, my outfit, New York, or anything fashion-related in general, please reach out! I absolutely love hearing from you. I hope you have a wonderful weekend!