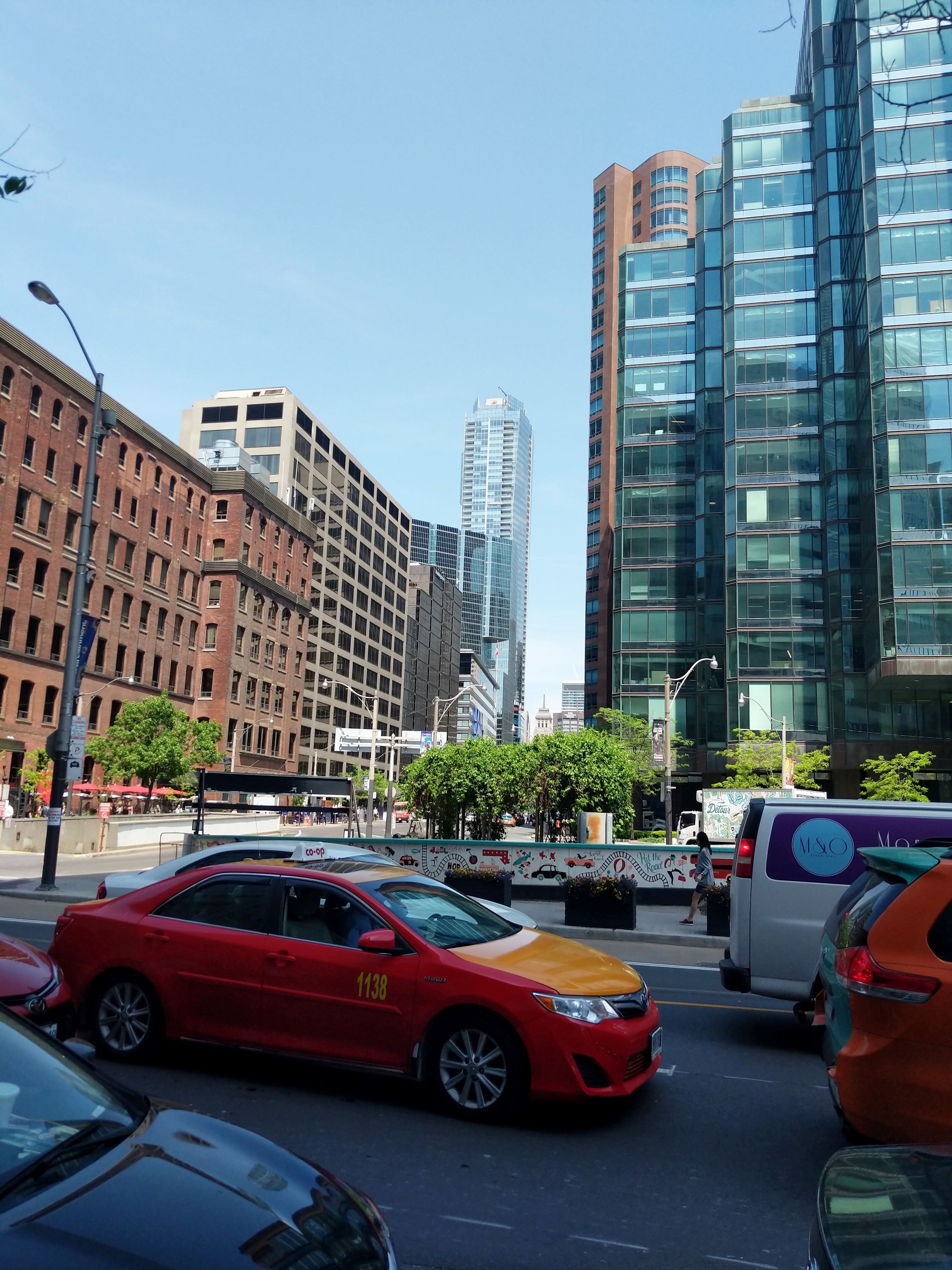 It’s finally here!—My travel guide for Toronto, Canada. We spent three full days in the area for a family vacation before moving on to New York City. My mom wanted to plan a trip to some place in Europe, but the way our busy summer schedules worked out, we just didn’t have enough time. Toronto provided the perfect, world-class alternative! 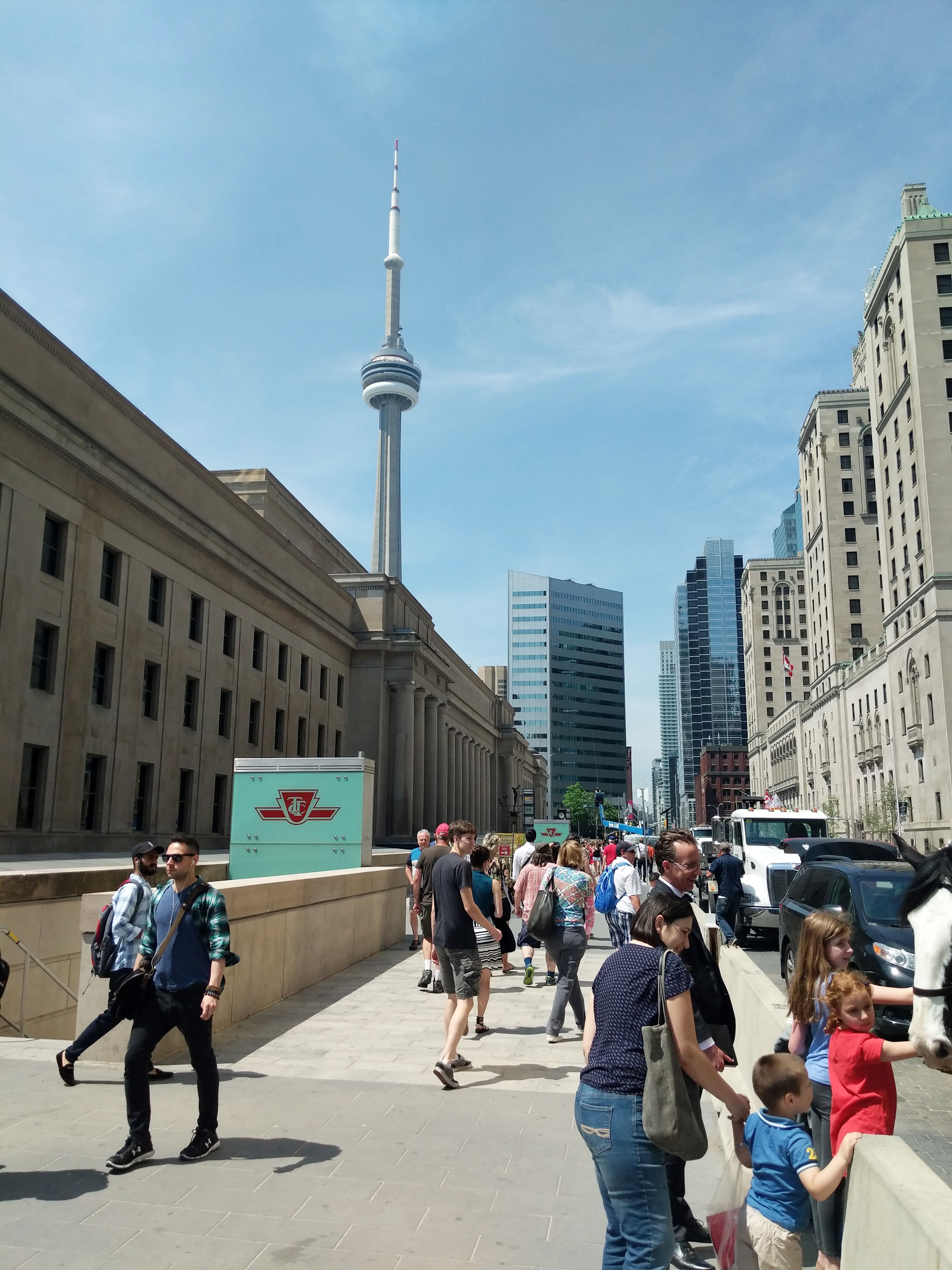 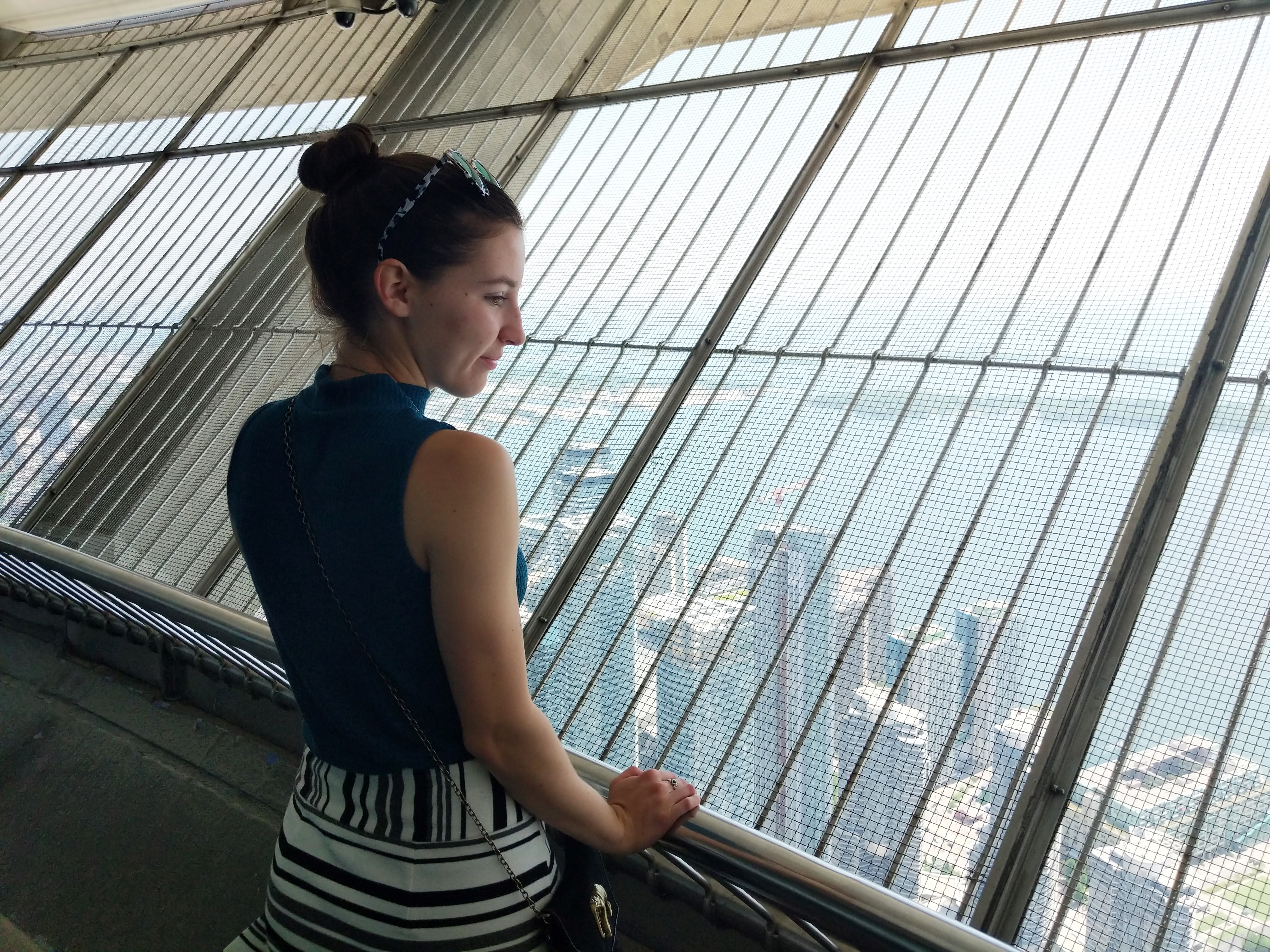 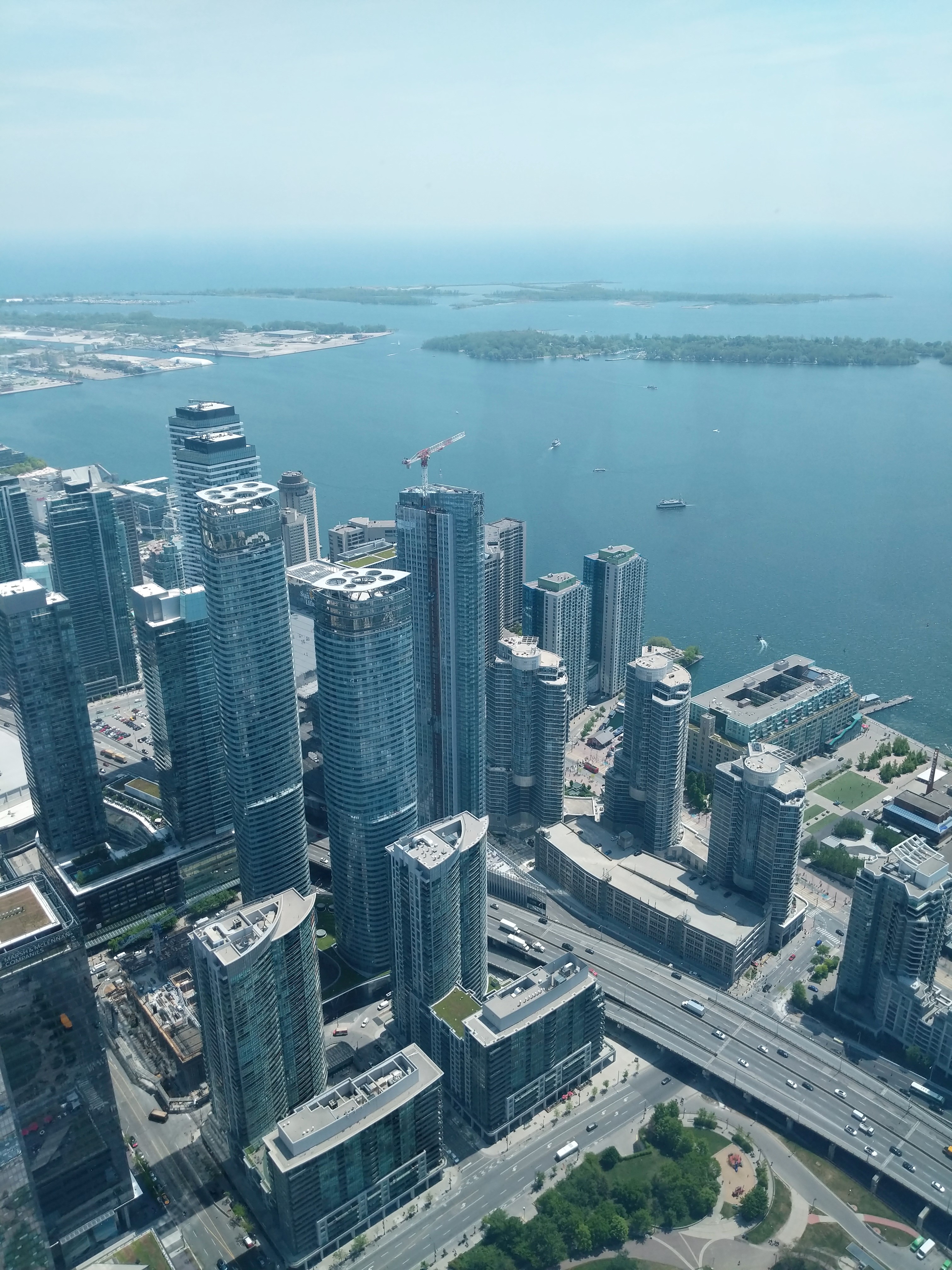 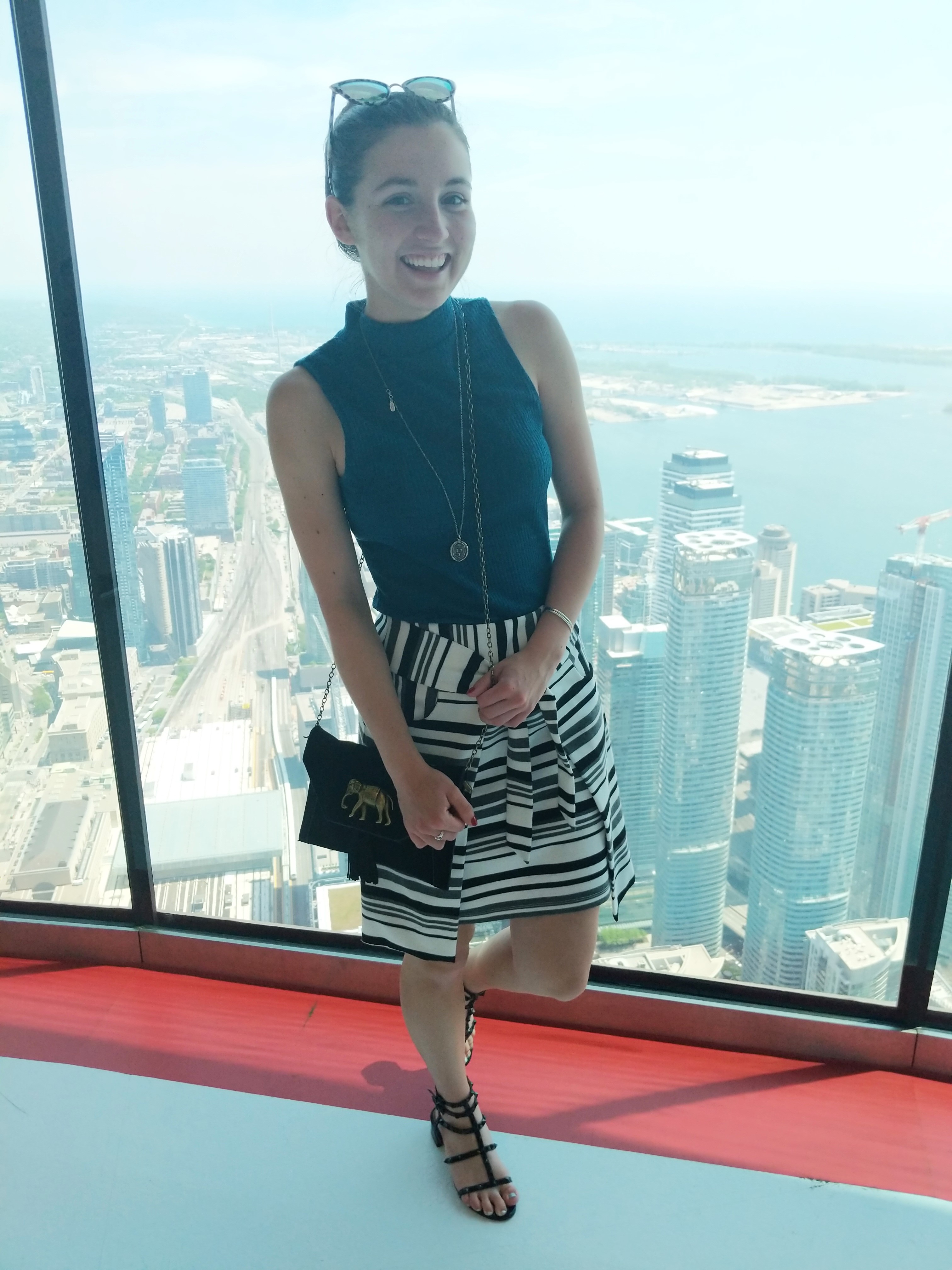 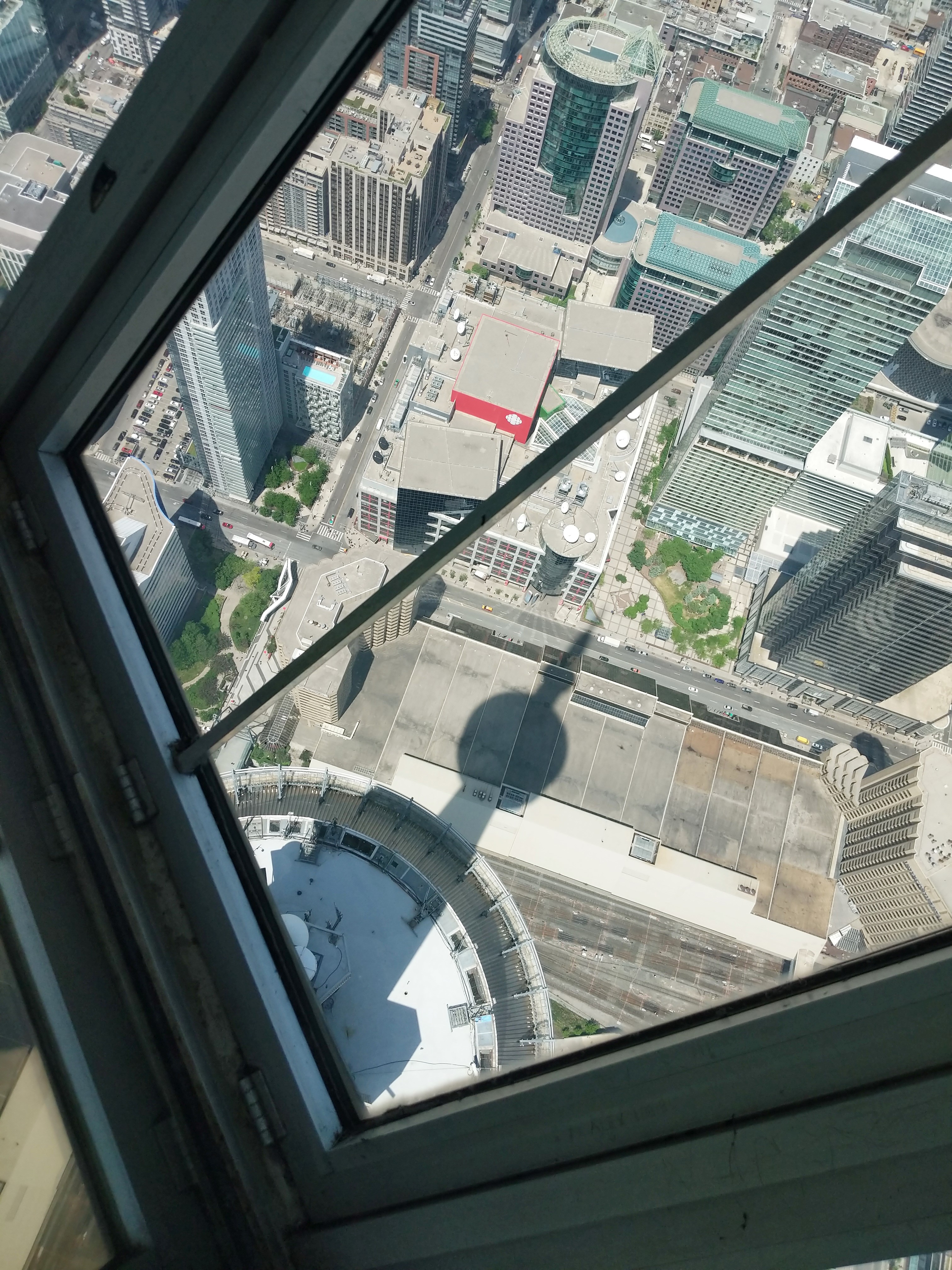 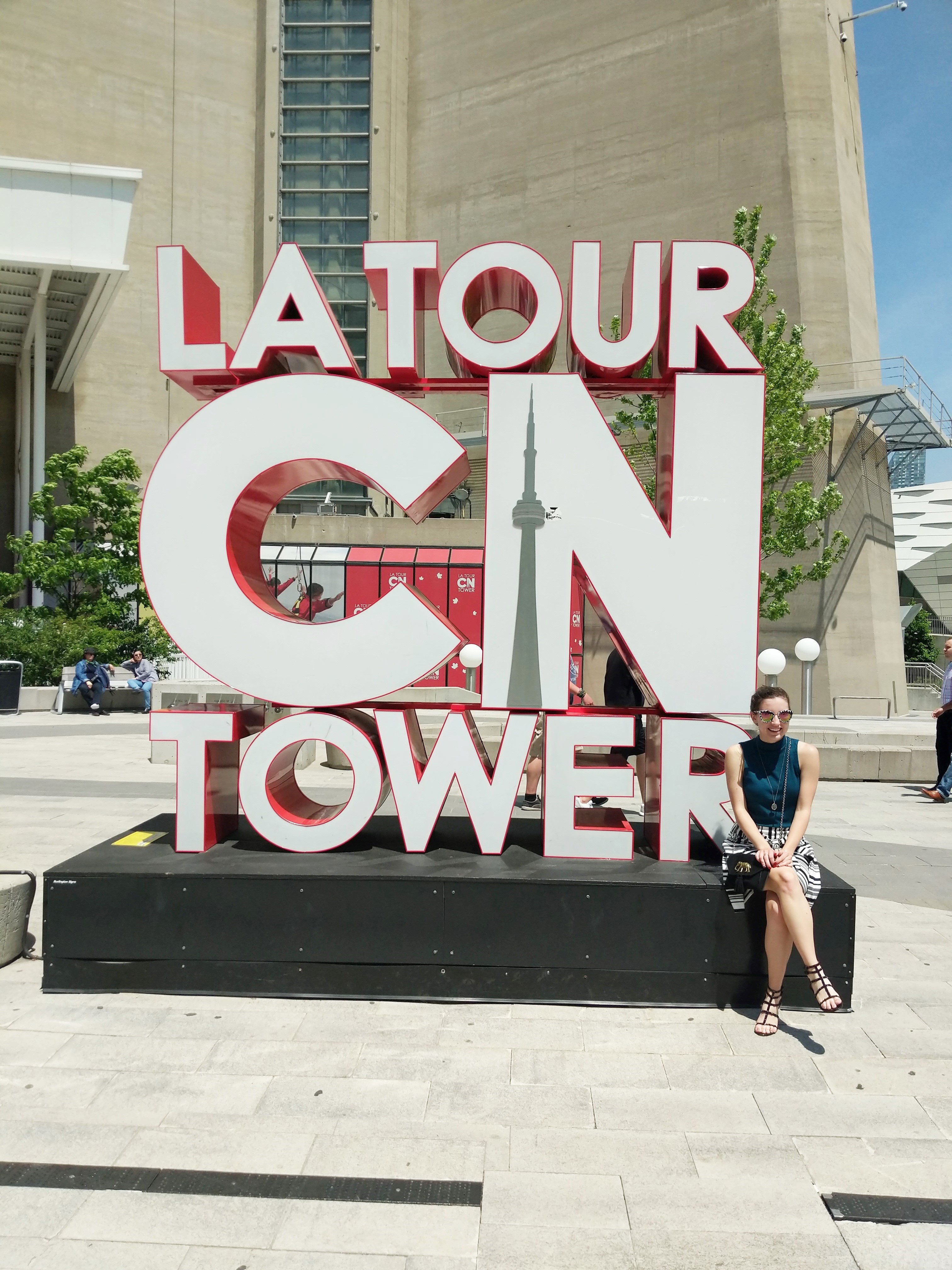 We stayed at the ­­­­­­­­­­Hazelton Hotel in the neighborhood Yorkville. It was a really swanky part of town with lots of high-end shops and restaurants to explore. I highly recommend it! The hotel, on the other hand…The rooms were very, very nice, as was the hotel in general. However, as expected, it was pricy and did not come with any perks (like breakfast). There also seemed to be a lot of bate-and-switch where the hotel promised one thing and then went back on their word. But you just have to take this with a grain of salt—like I said, the rooms were great. It wasn’t an overall bad experience by any means.

We started our first day at a restaurant called Over Easy for breakfast. The service could’ve been better—it just seemed like our waitress wasn’t around much—but I thought the food was delicious. As some of you may know, I’m gluten-free, and this restaurant had lots of items I could eat (however, it’s always easier to find breakfast items; they did not have GF toast). I ordered one of the skillets and let me tell you, the potatoes were amazing!

We then took the subway downtown for a day of tourist activities. It took a few tries for us to figure out the subway system with Canadian money and all. I was still considered a student so my ticket was cheaper, but they force you to do this silly exchange of money for tokens. It made buying a student ticket way more complicated than it had to be.

Once downtown, we walked a bit to the CN Tower! At one point it was the tallest building in the world, and it’s considered one of the Seven Wonders of the Modern World. It acts as a communications tower as well as a major tourist site. There are different things you can pay for, including a ride up 1136 feet to the look-out level and glass floor (super cool yet slightly scary; you can see a few pictures above). The elevator you take up doesn’t last very long, but beware if you’re afraid of heights—it travels fast and the doors are glass! If you want, you can pay extra to go even higher in the building. Due to renovations, they allowed us to do this for free. I would recommend that you do not pay the extra money to go a few floors higher. The view really wasn’t any different and it just seemed crowded. If you’re really adventurous, you could pay to harness in and walk along the outside of the building!! Obviously, we did not do this, but we watched as some people did. Eek! 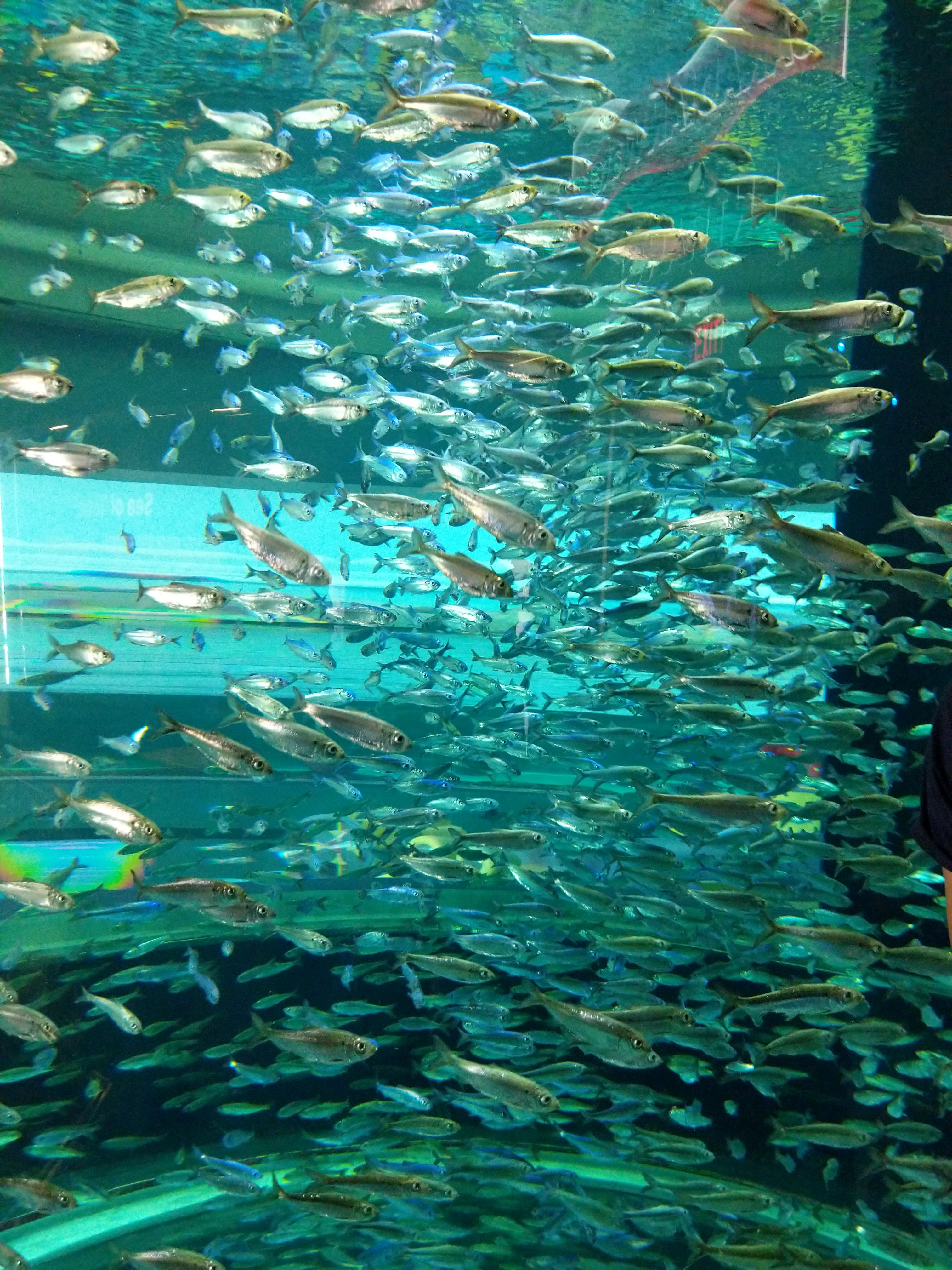 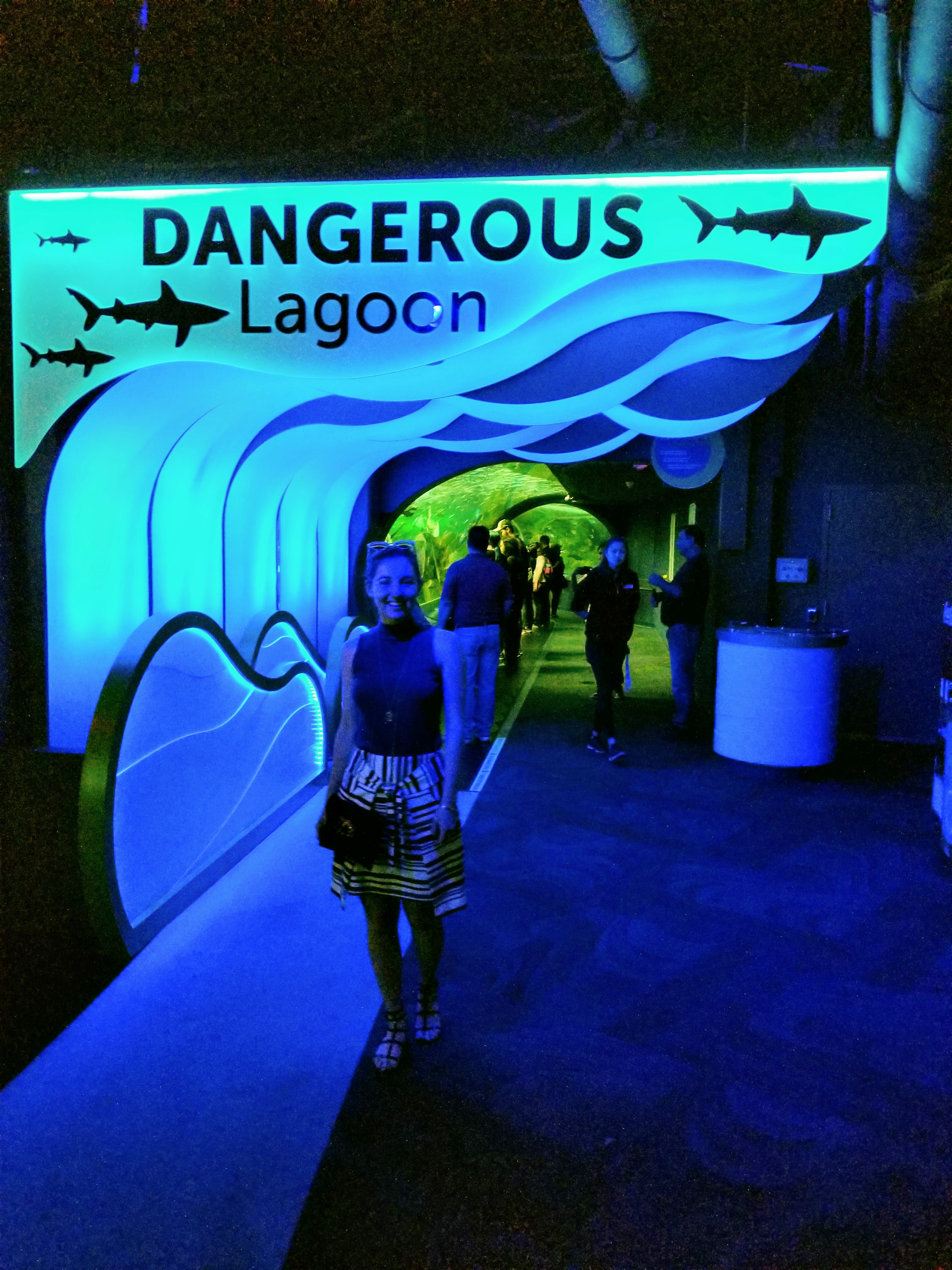 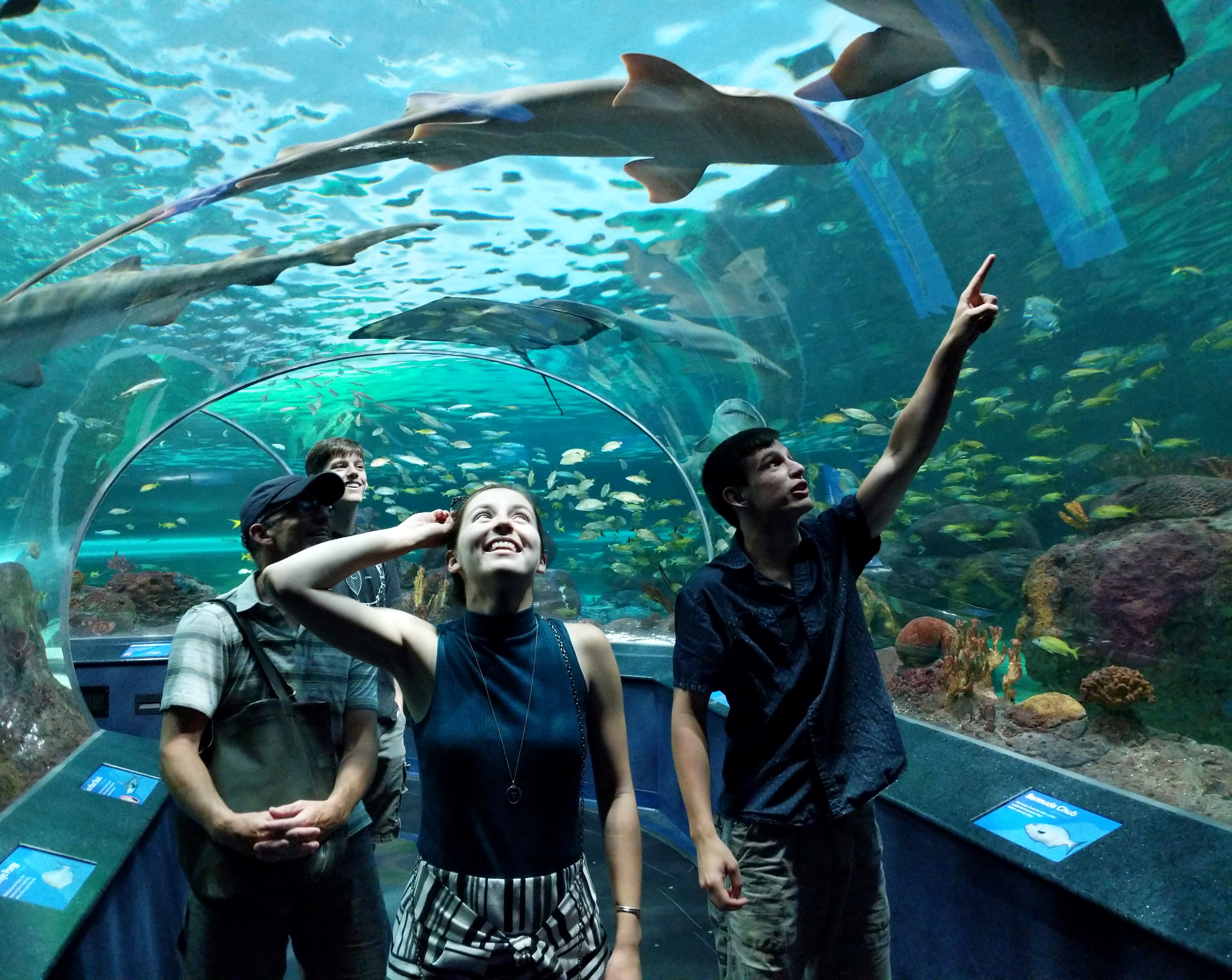 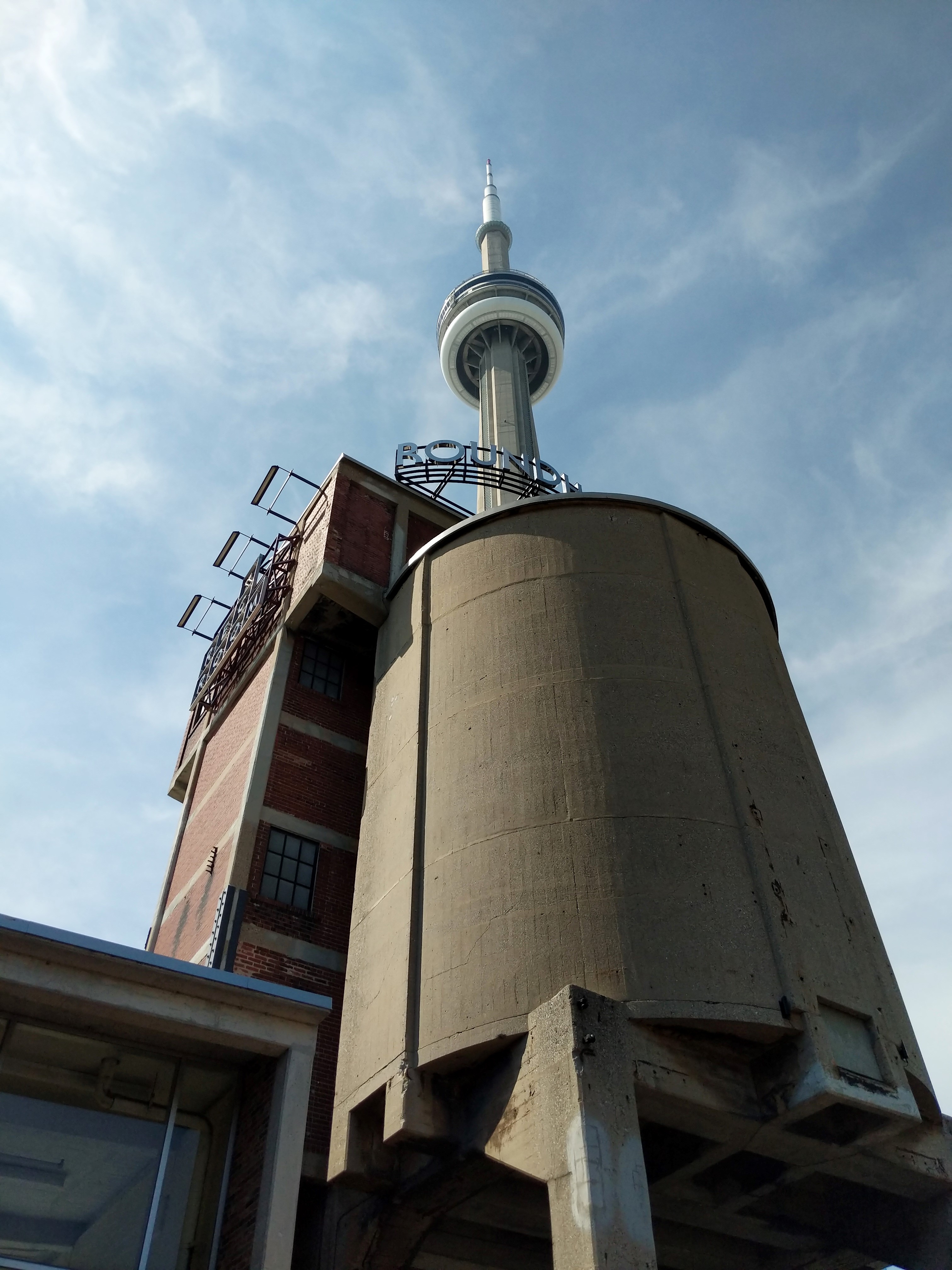 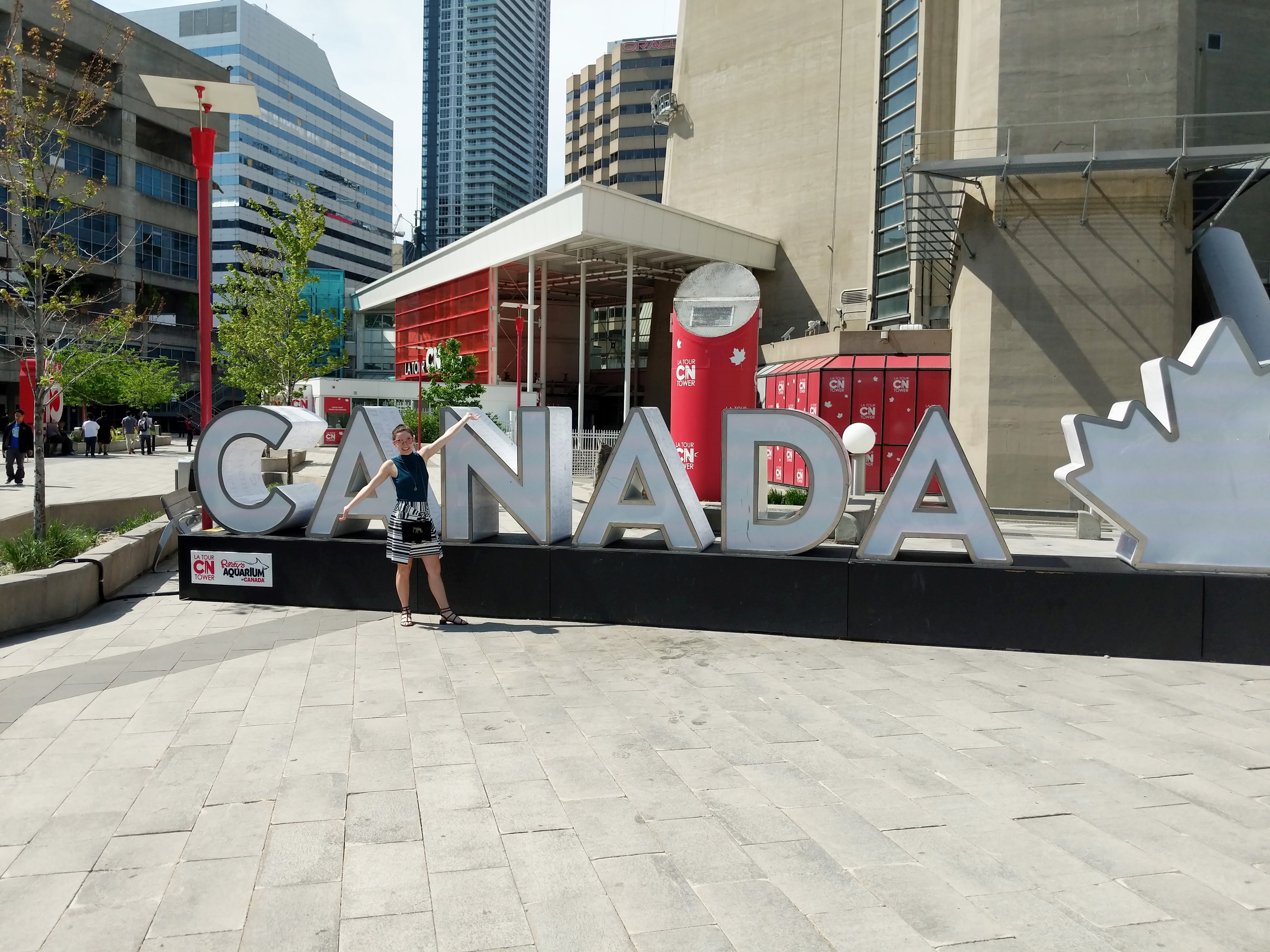 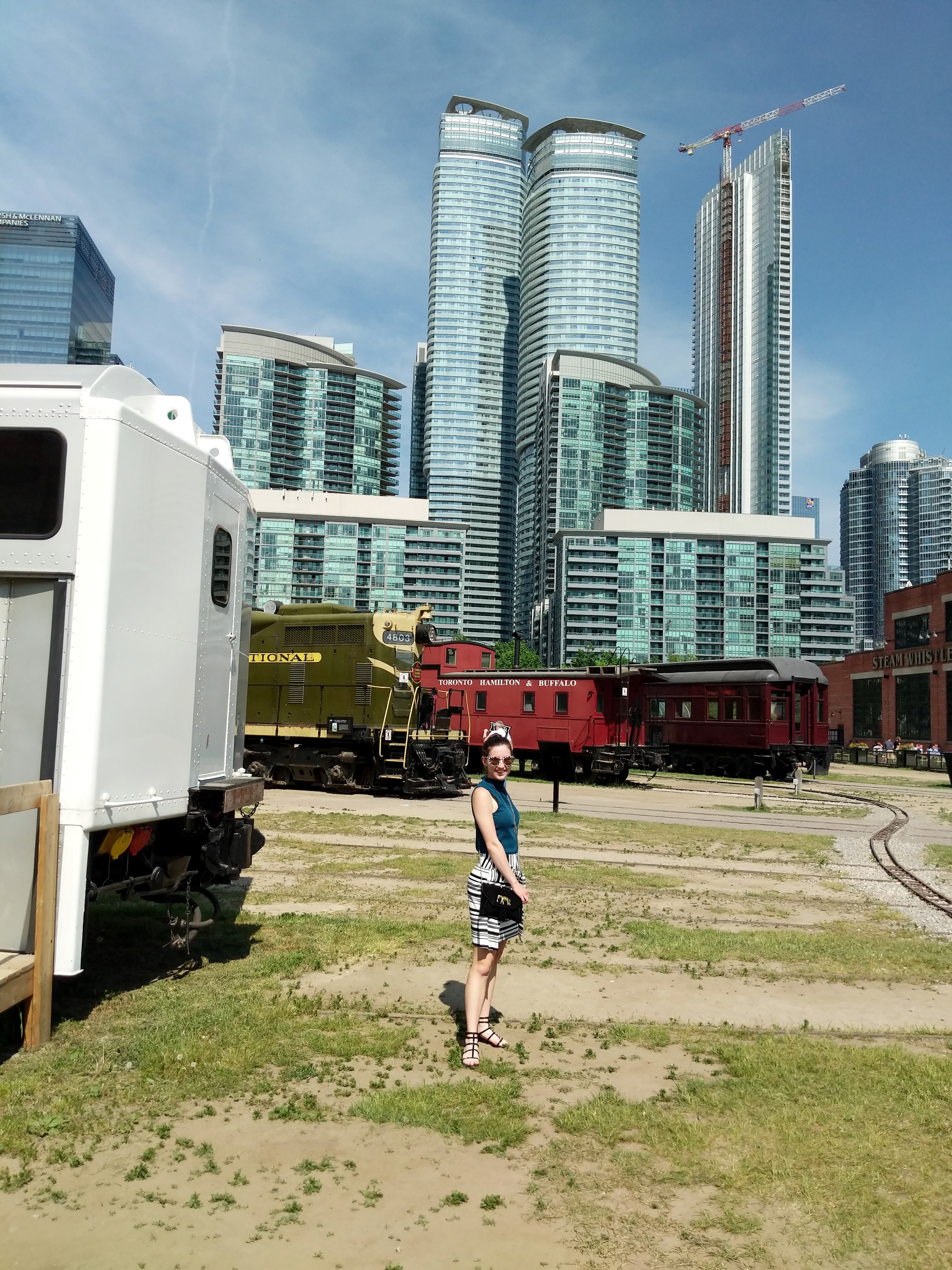 Next, we went right next door to the Ripley’s Aquarium. This was really awesome! Aquariums always make a great vacation activity because they provide a cool, indoor break from the hot weather. There were so many pretty creatures to see, and my favorite was the Dangerous Lagoon! If you don’t already know this, I love sharks and got to see a ton. There were also a few petting areas and really awesome glass tunnels to get close and personal with the animals. I would highly recommend this!

Right next to the aquarium is a cool park made from an old turn-about train station (be sure to look for it from above while in the tower! It’s hard to miss—it looks like a big U where the trains would come and turn around). There were lots of trains to see and some restaurants, but none of the food peaked our interest. 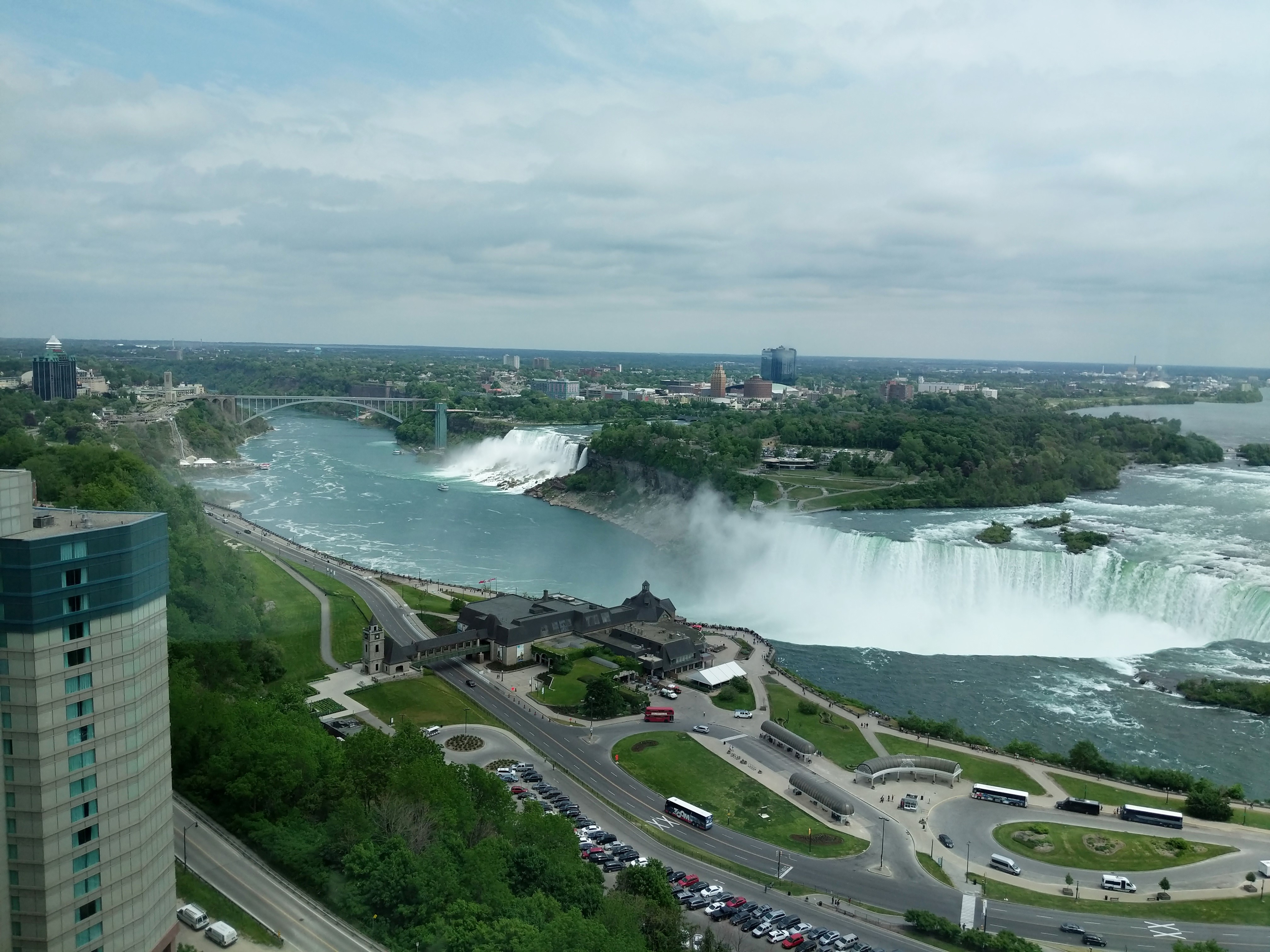 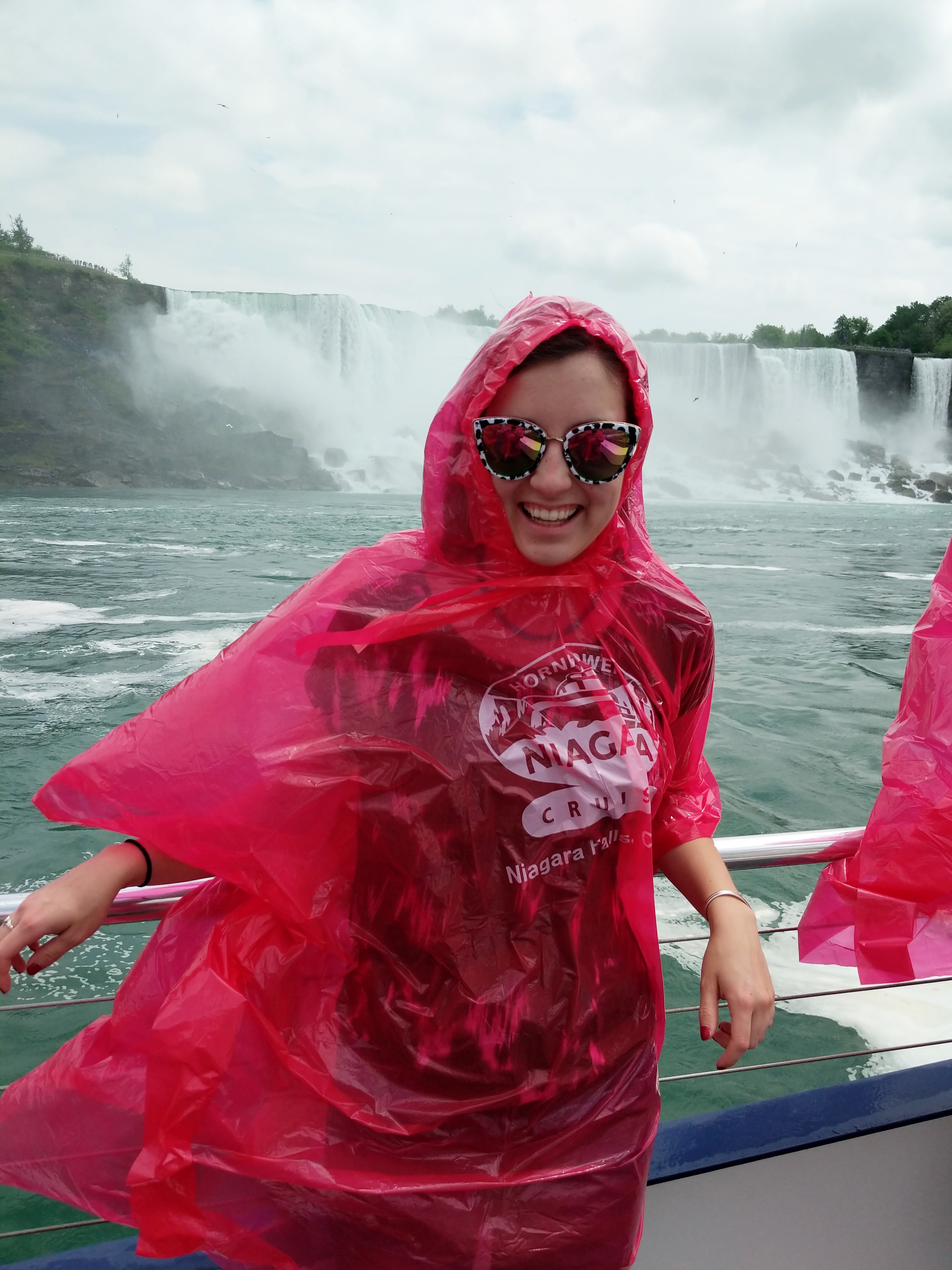 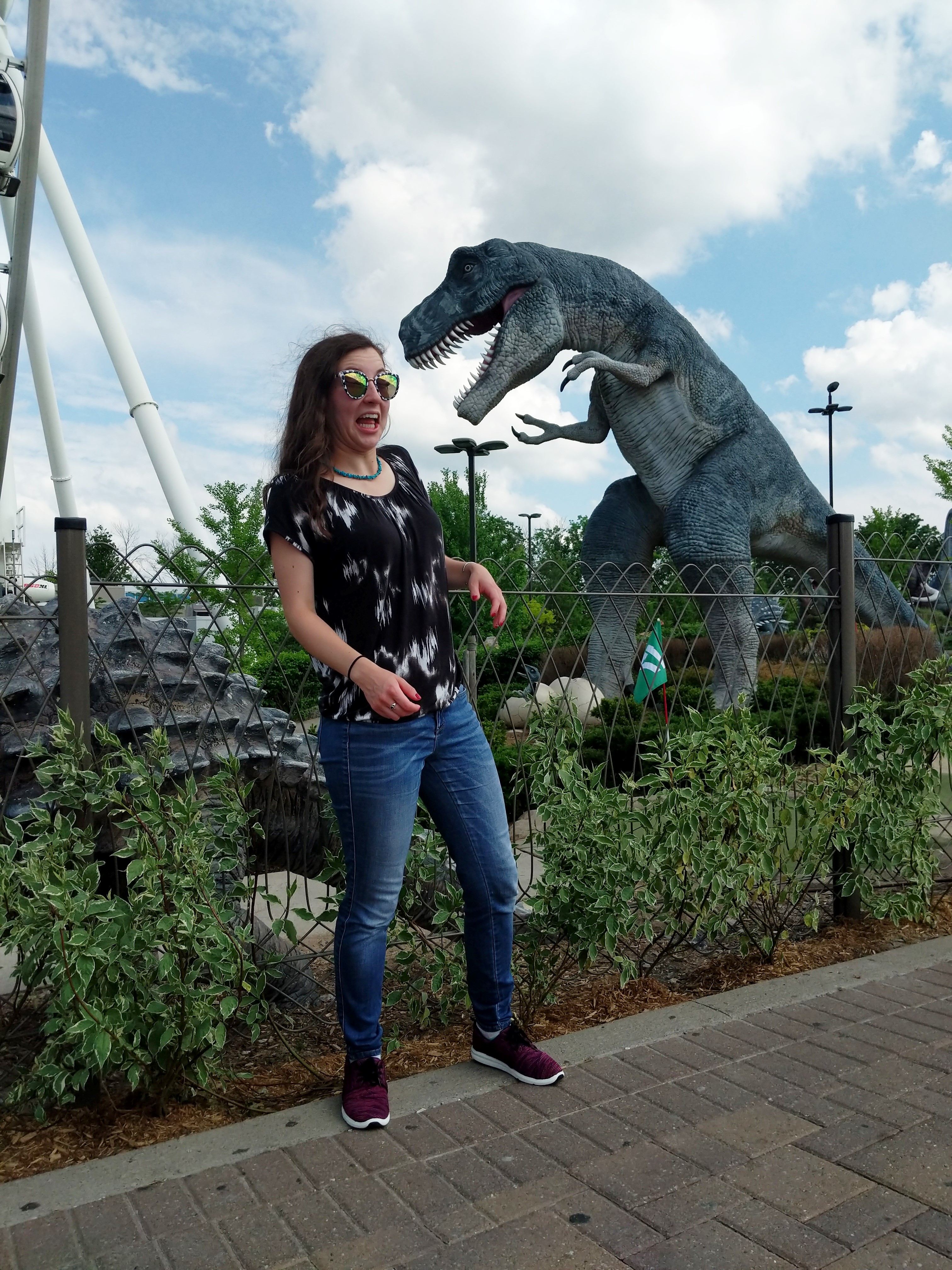 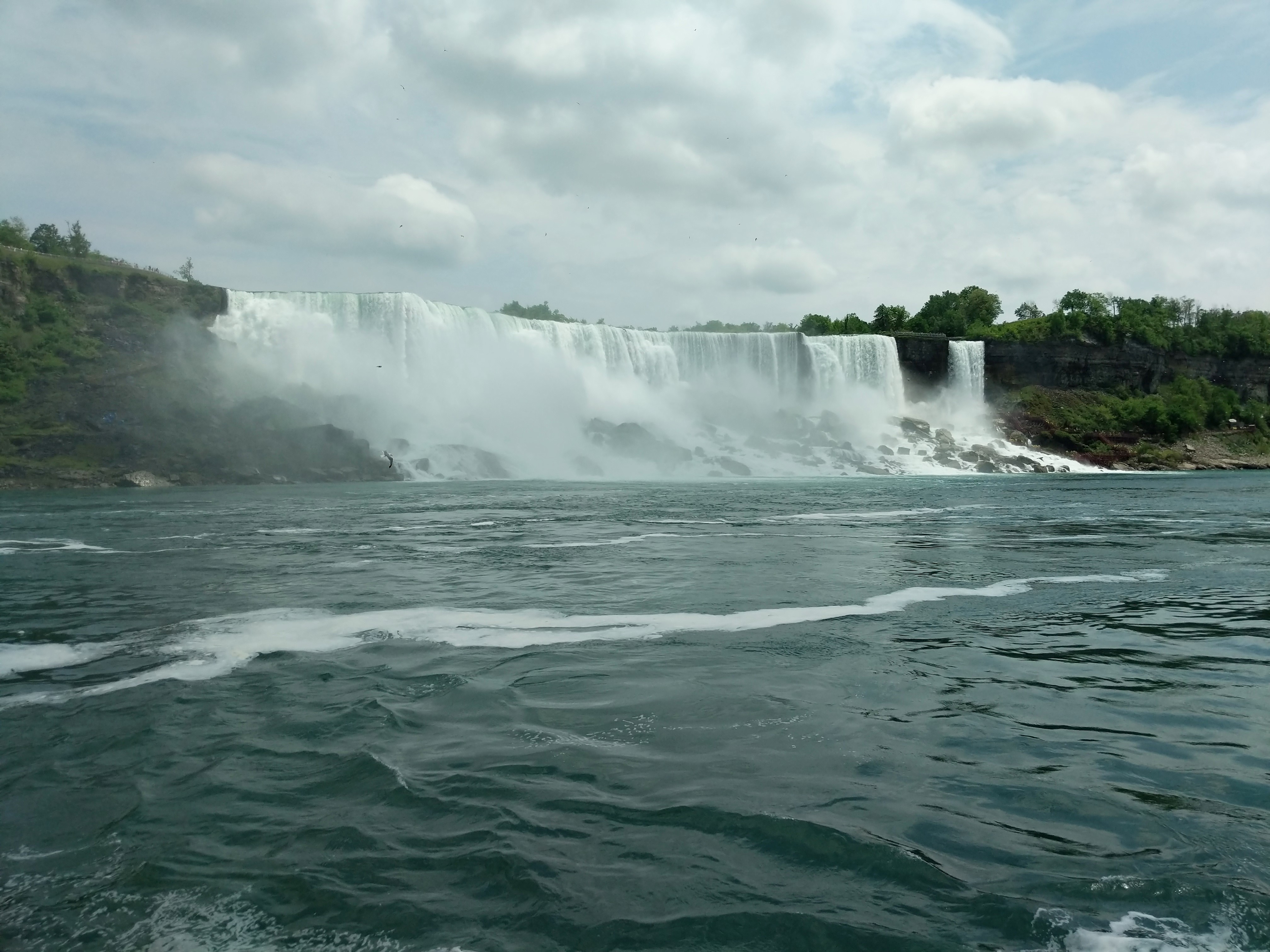 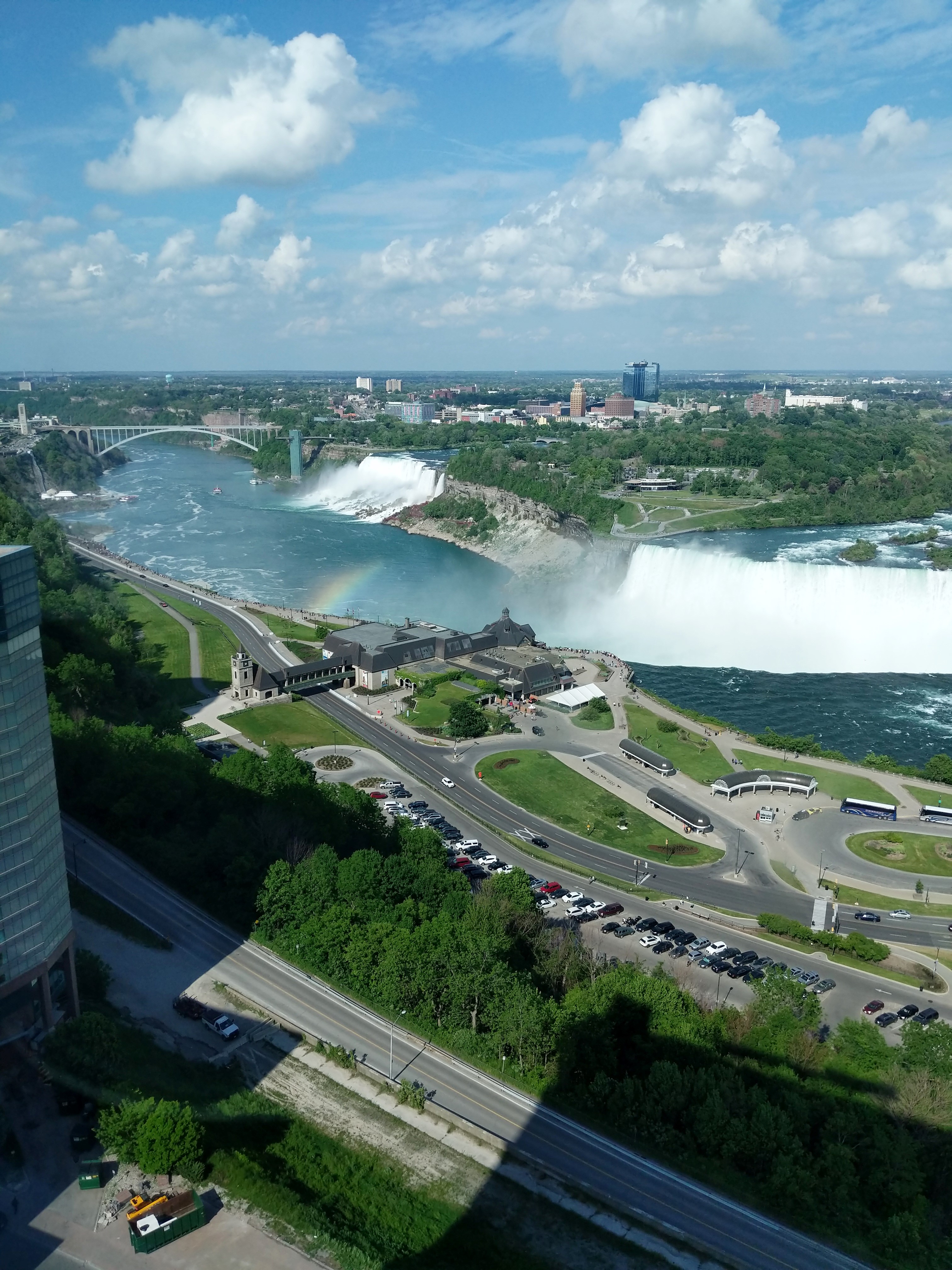 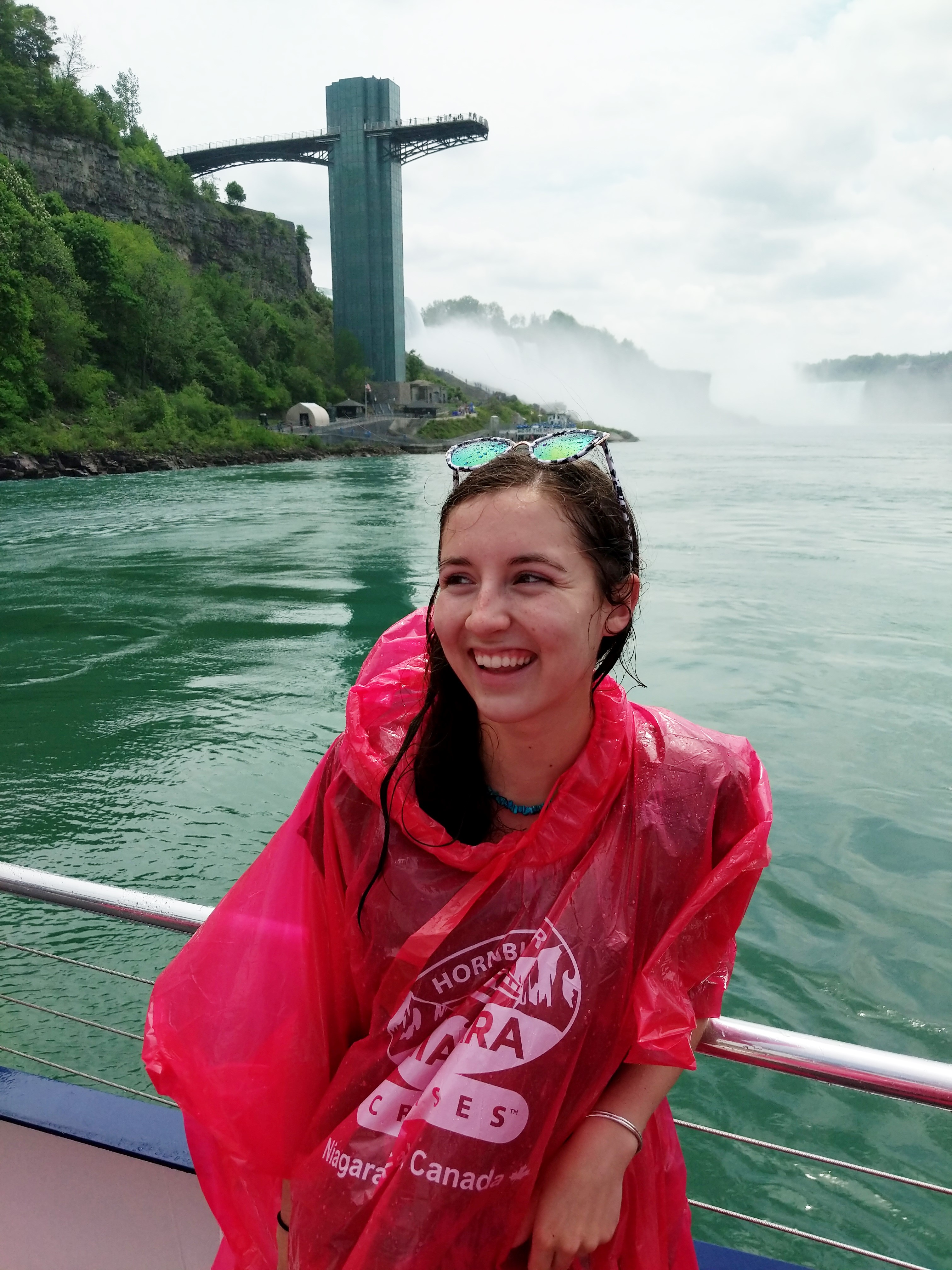 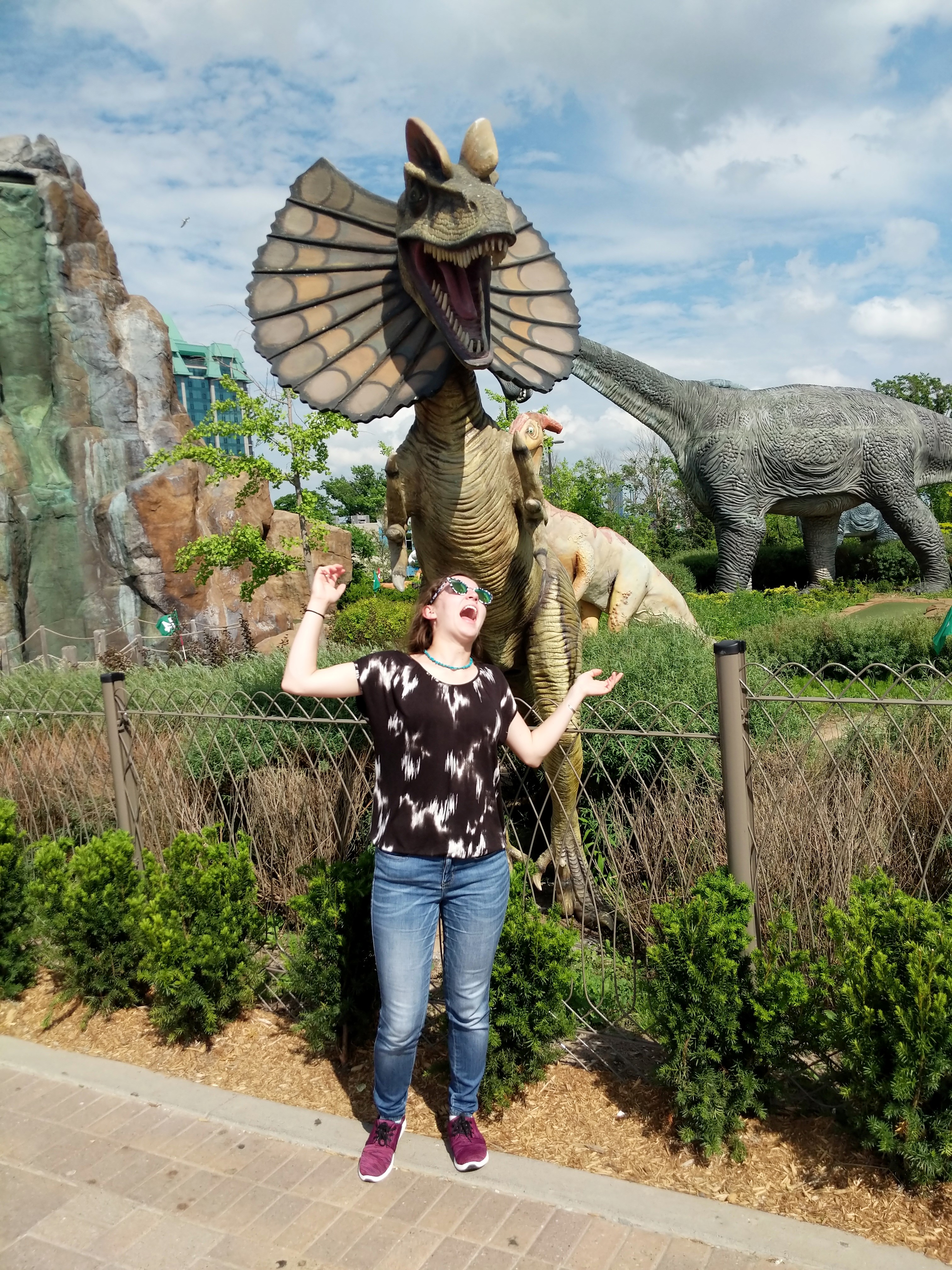 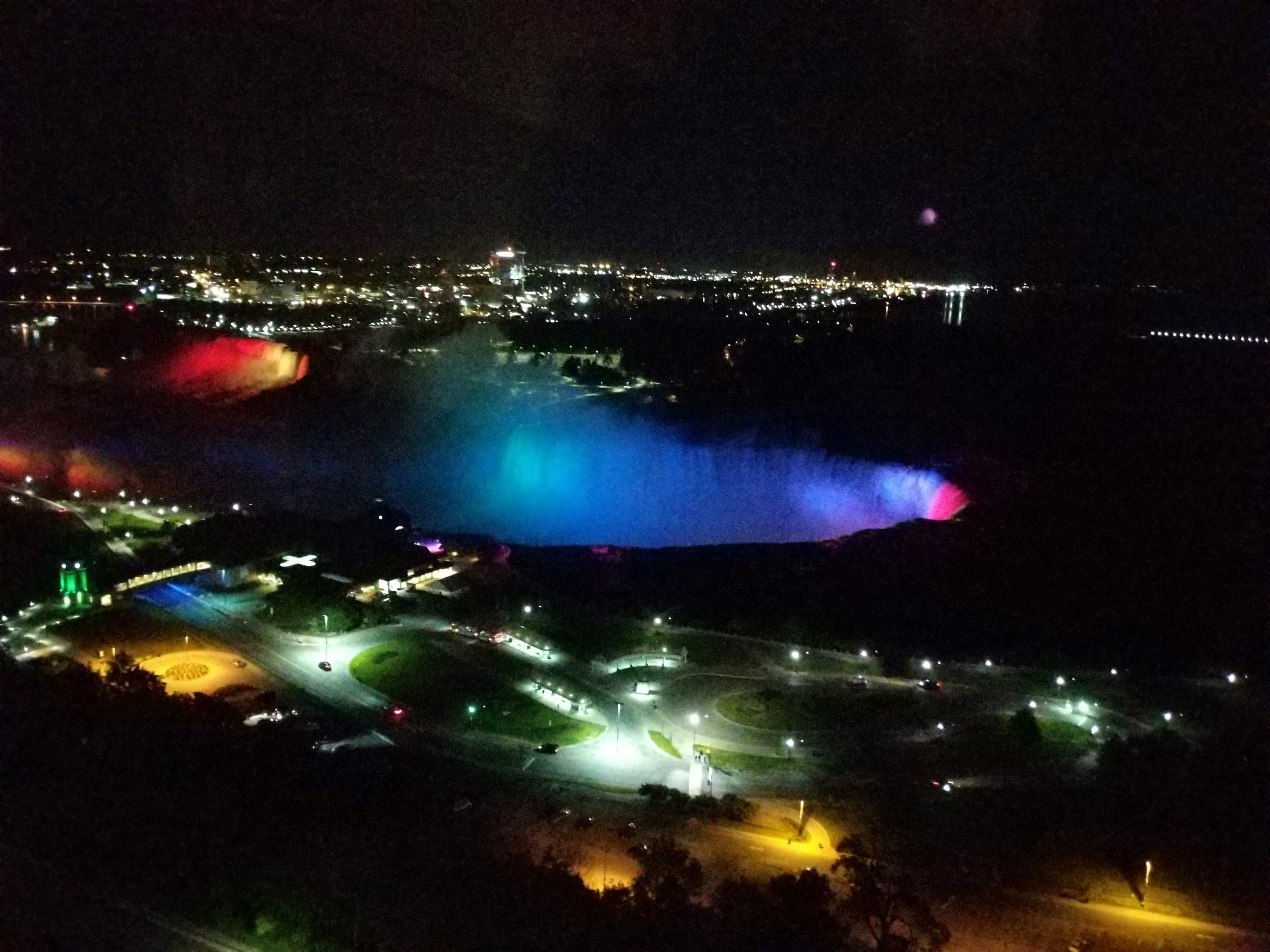 Our second day, we ate a quick breakfast at the Whole Foods near our hotel before renting a car through the hotel service. We drove about an hour and a half to Niagara Falls! If you go to Toronto, I feel like you have to make the drive to see the Falls if you haven’t already seen them. It was absolutely spectacular.

We first checked into our hotel, Marriot on the Falls. It was typical for a Marriot, but the view from our room was incredible! We were so fortunate to be able to see the Falls in the day, at night, and with the gorgeous light of sunrise the next morning.

We walked down to the water and bought tickets for the Hornblower Niagara Cruises. This boat ride was definitely worth it—it takes you straight into the heart of the Falls and you will get soaked! I’ll be doing a post in the next few weeks about what to wear specifically for this occasion.

The rest of the day we just kind of hung out and drove to see a movie at a nearby theatre (Infinity Wars, anyone? Mind blown). To be honest, the town was kind of…eh. It’s so touristy, with a bunch of gross American chain restaurants and tacky tourist pastimes, like cheap haunted houses and the like. I can’t tell you how many old animatronic people and creatures were around. It was just a strange, almost grubby vibe. Although, there was a cool dinosaur-themed put-put golf we seriously considered doing. We opted for naps instead though. Overall, the only thing worth doing is the boat tour of Niagara Falls, which is absolutely necessary. After that, you can leave town! Haha. 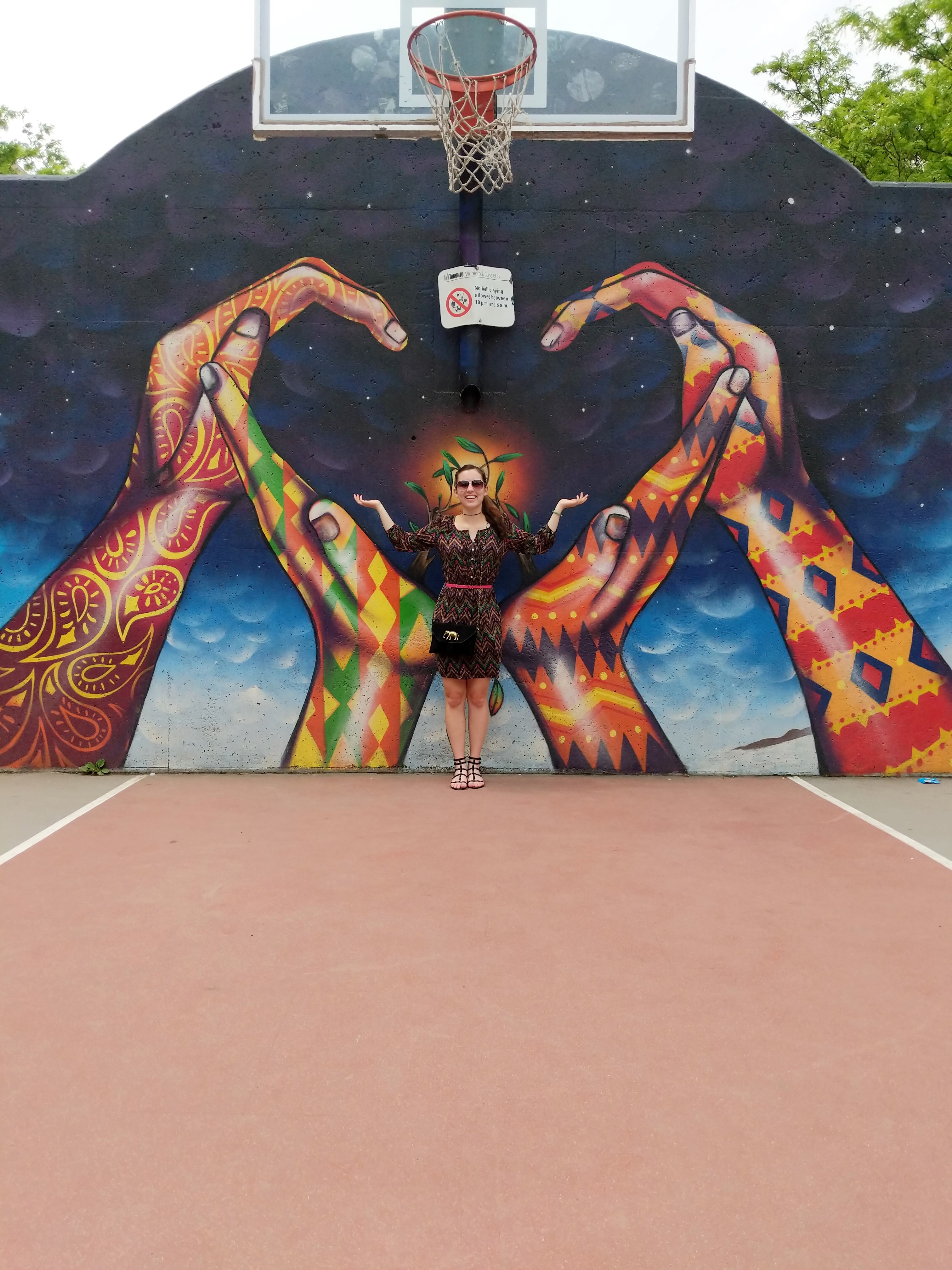 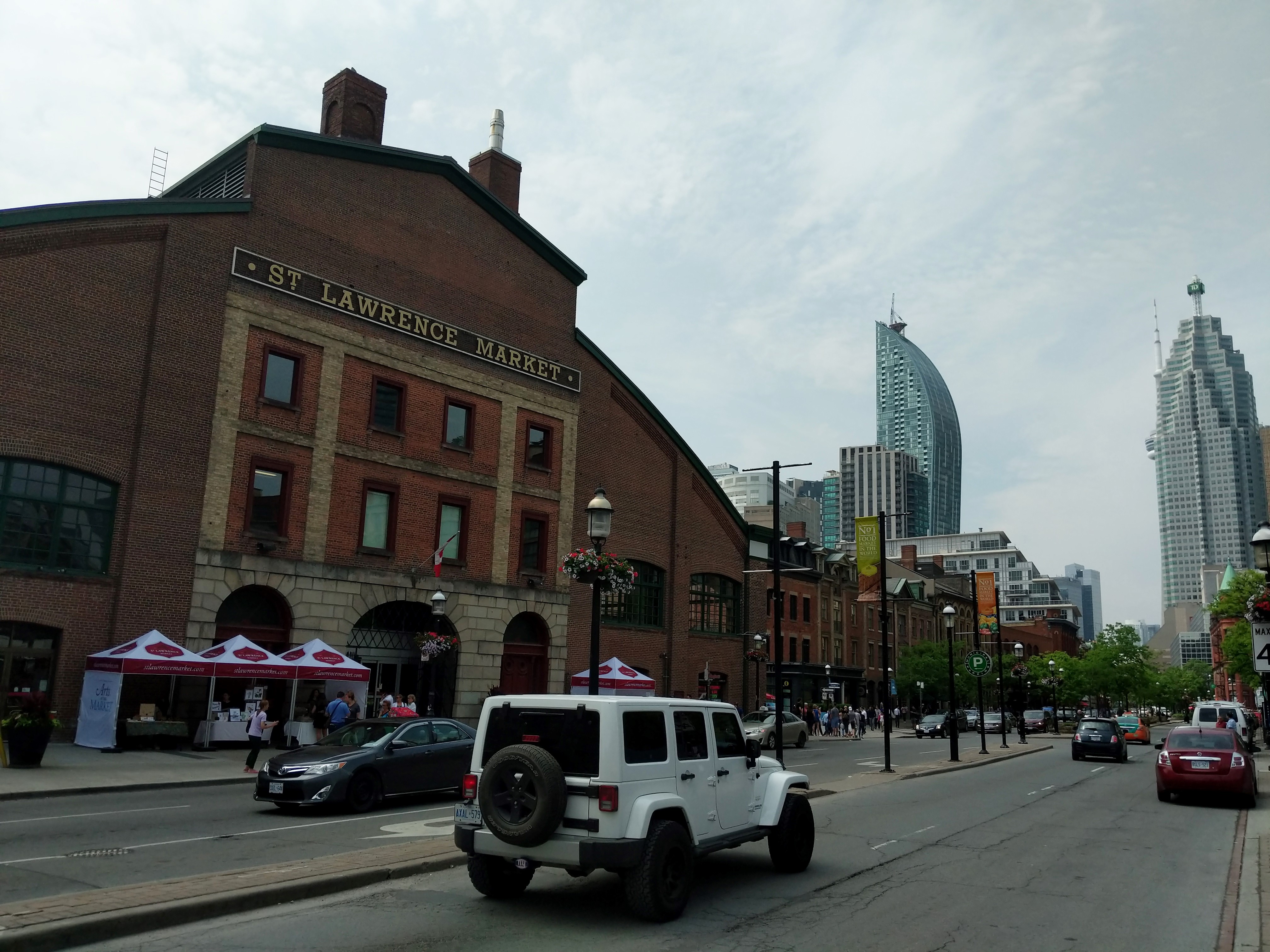 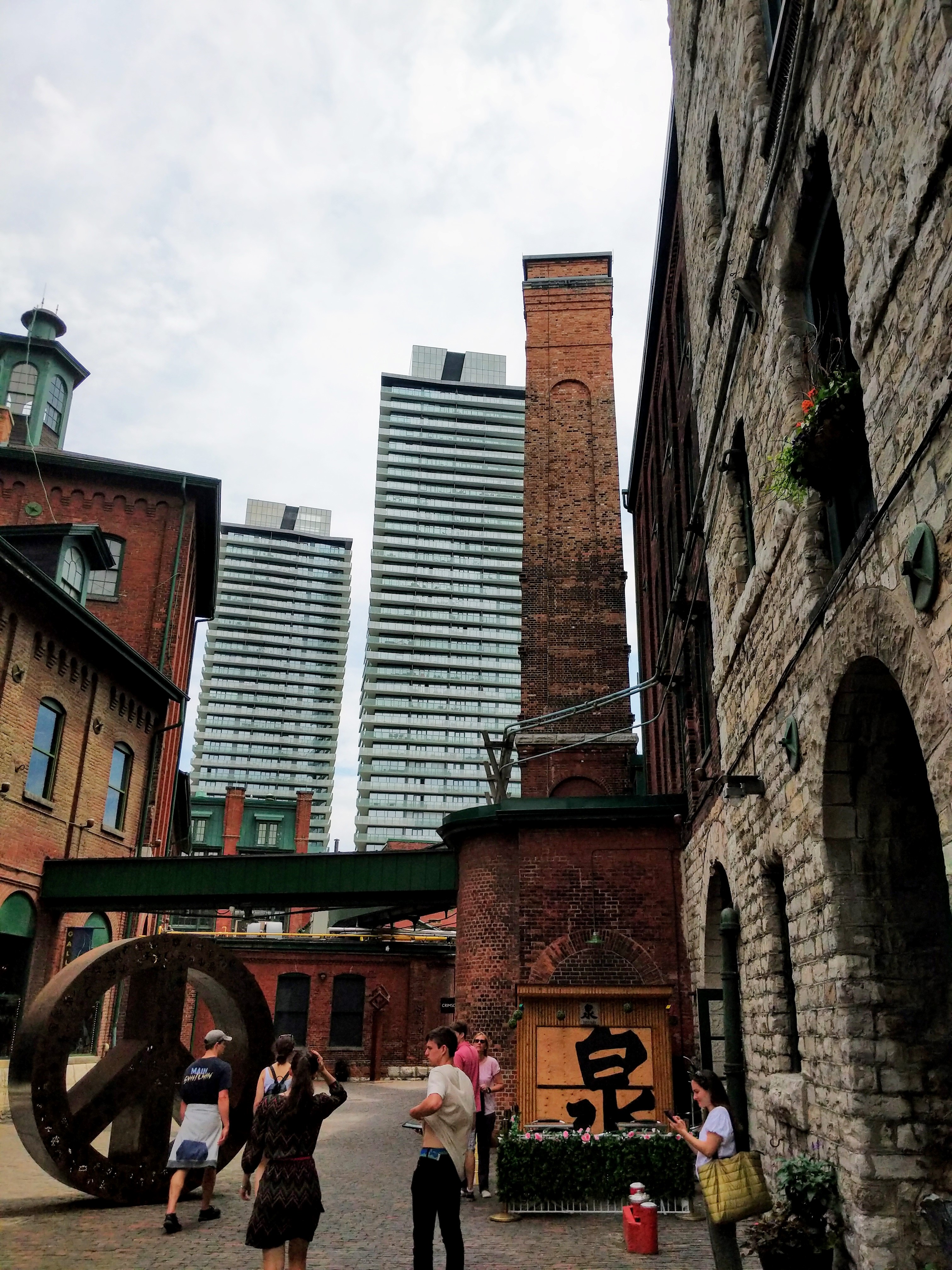 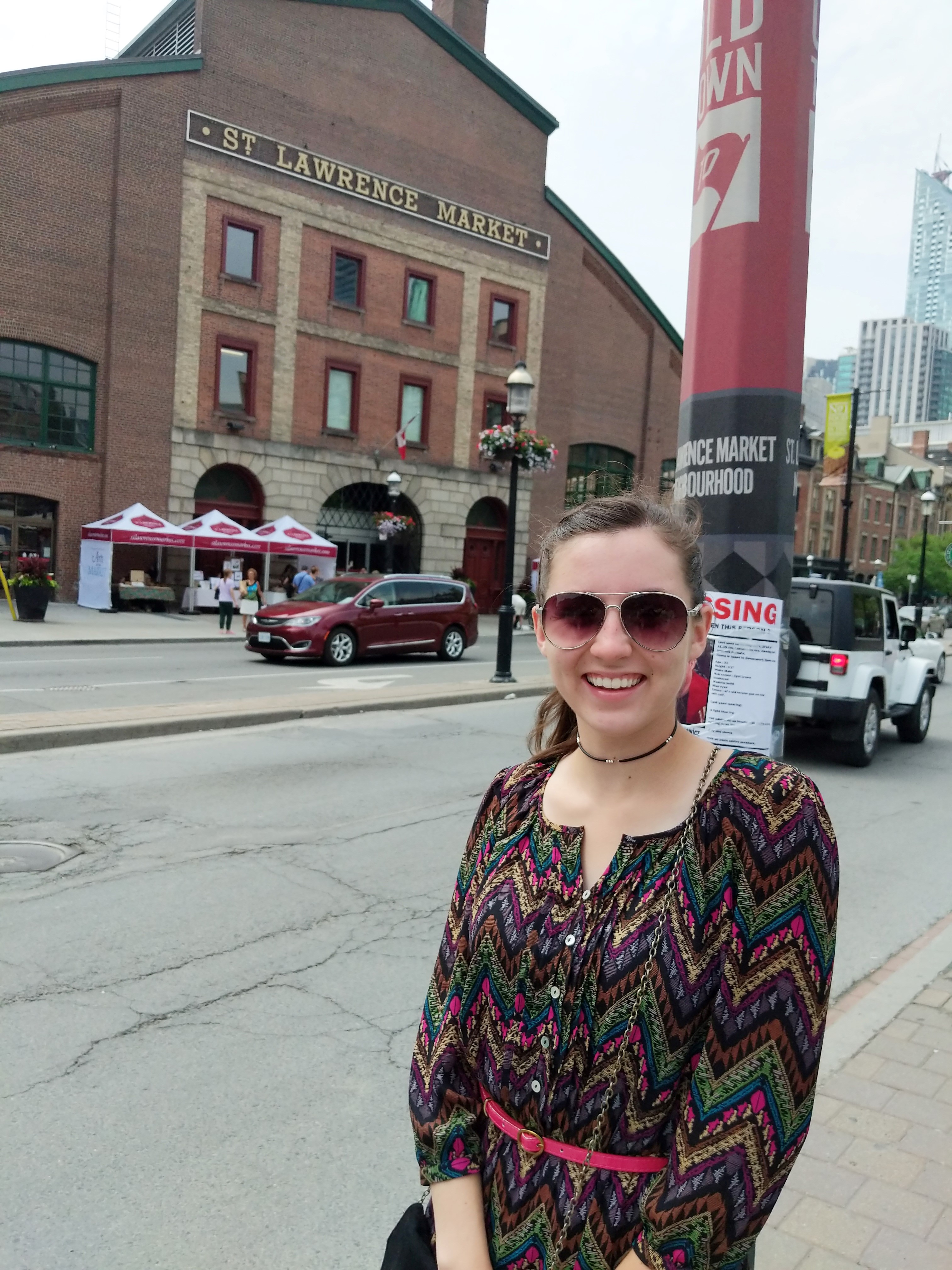 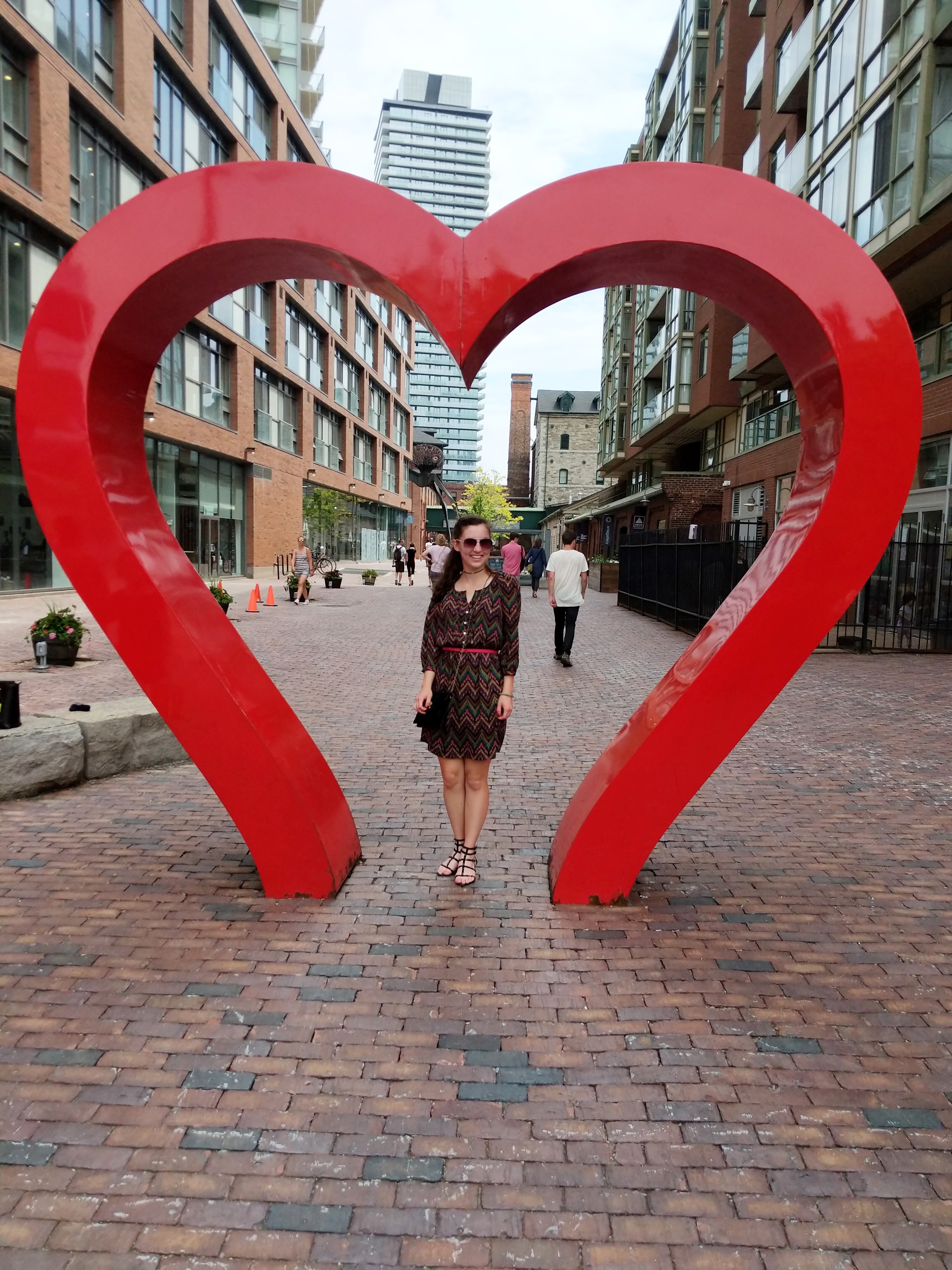 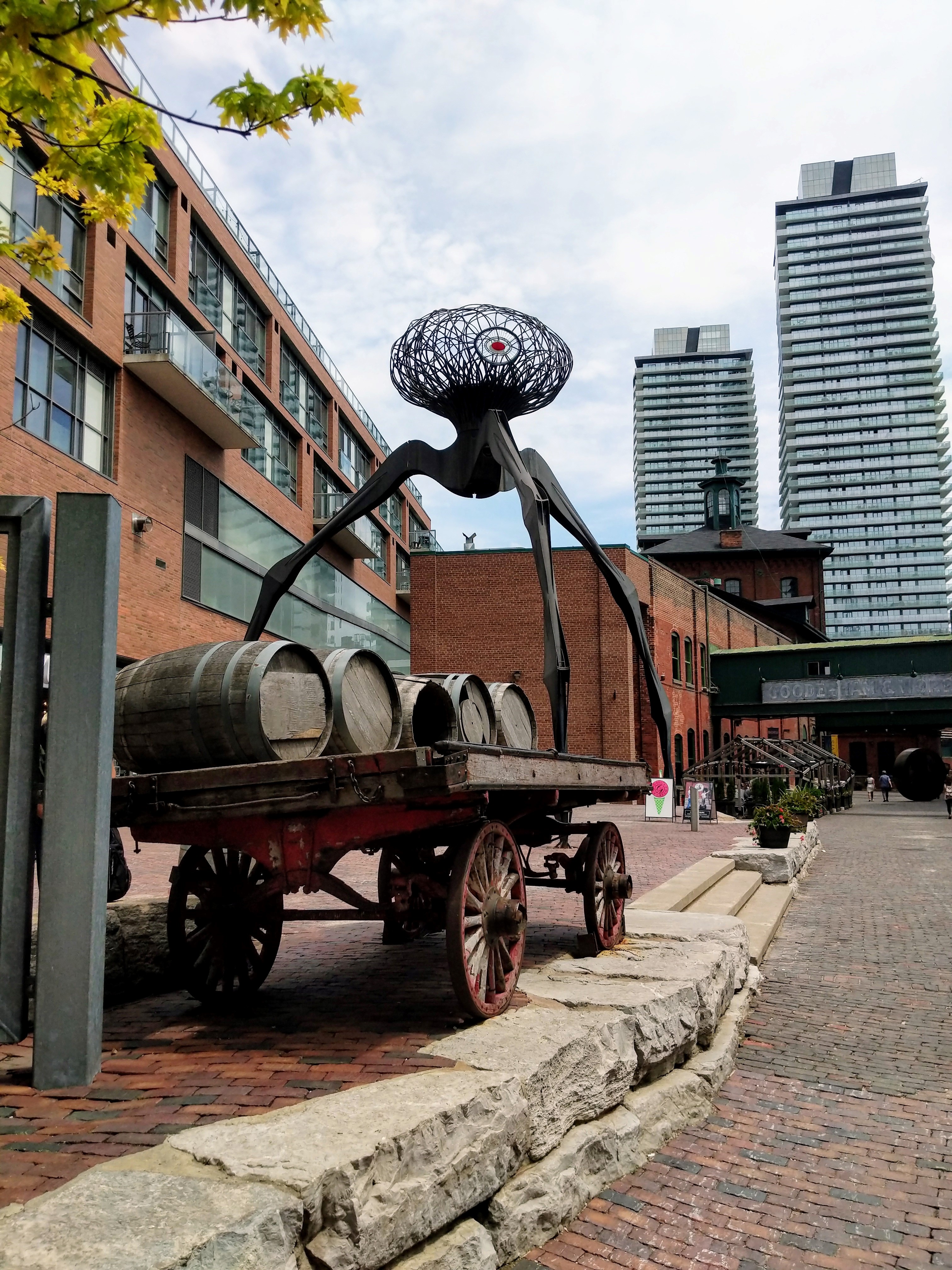 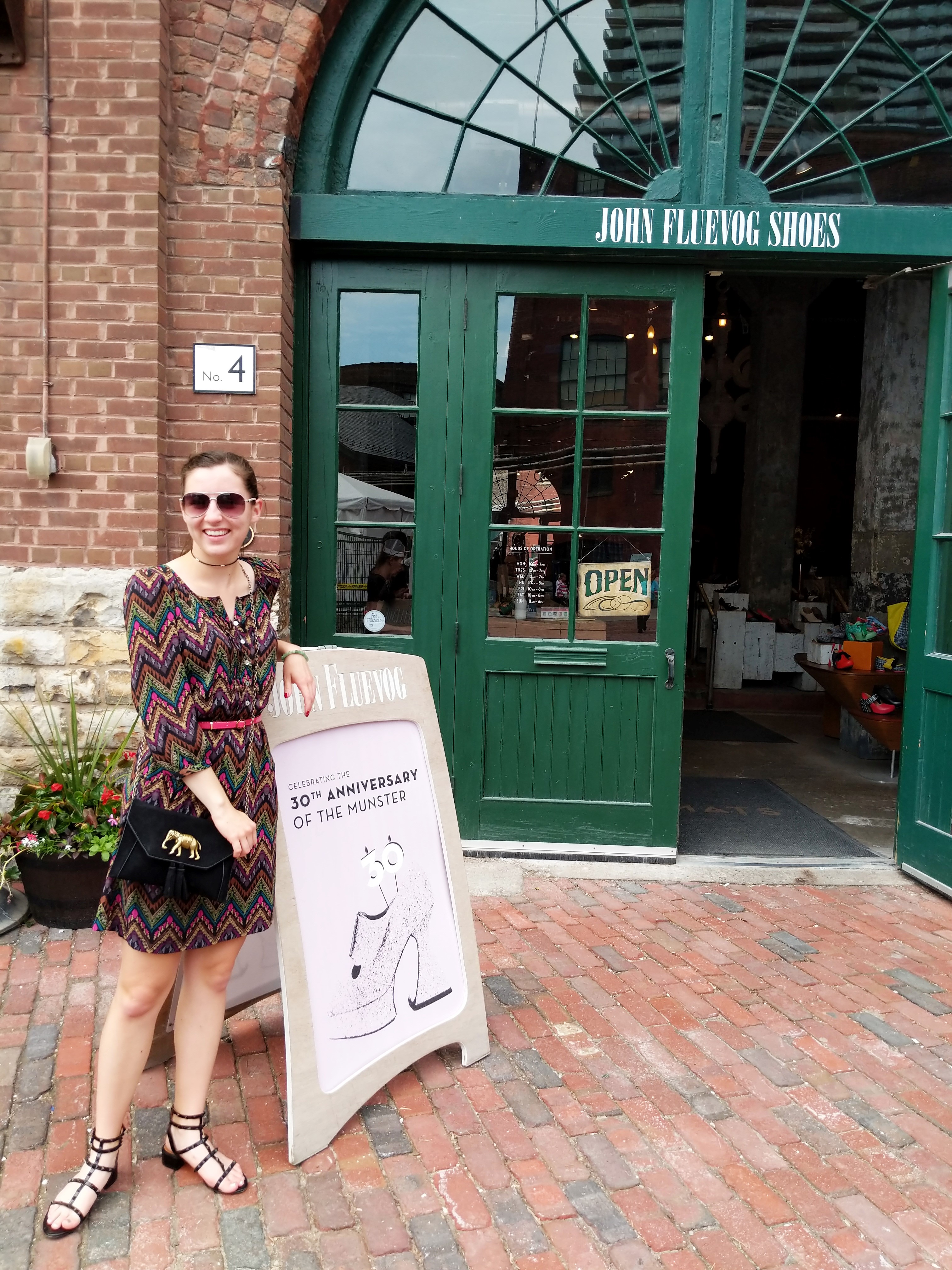 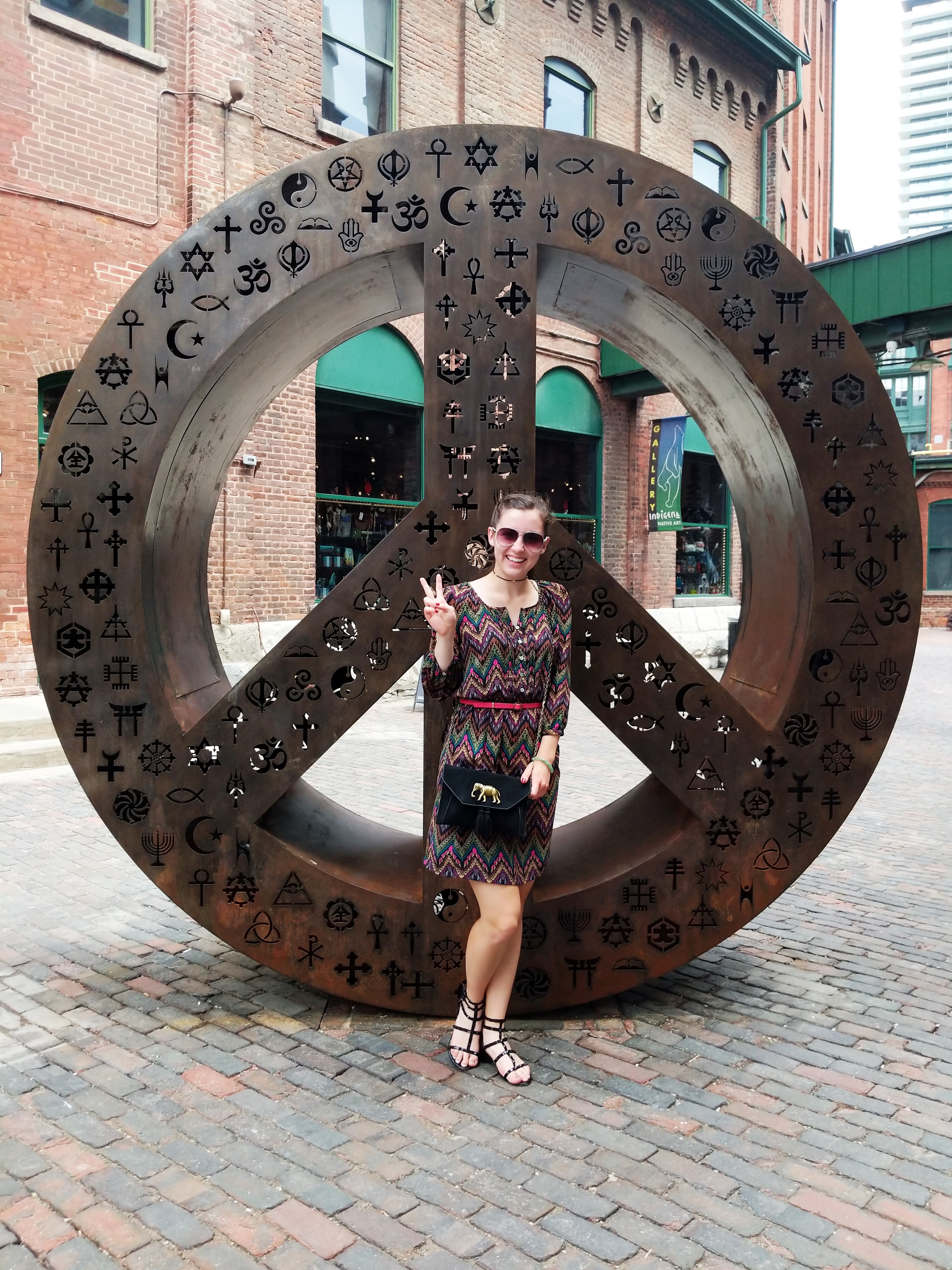 The next day we drove back to Toronto, and fair warning: the traffic was nuts. It took us 3 hours to get back! Once there, we did a lot of walking and exploring, checking out the St. Lawrence Market and Distillery District. The Distillery District was a really cool part of town with unique art, restaurants, and shops, including a Fluevog shoe store. They make the funkiest shoes way out of my price point, but some of them were so pretty! I encourage you to spend some time just exploring in Toronto. There were so many great art pieces and interesting buildings. But just so you know, as expected with any big city, everything was very expensive!

I’ll be doing a post later in the month about what to pack in Toronto and the fashion I saw. I will also be sharing all the outfits seen in today’s post, so stay tuned! Tomorrow I’ll start sharing more about my trip on Instagram Stories, with exclusive pictures not seen here. I hope you enjoyed hearing about my small exploration of this awesome city. If you have any questions at all about what I did, where I stayed, or what I ate, please do not hesitate to ask! I’m here to help you. 🙂

Enjoy the rest of your Monday.