Costumes Through the Years 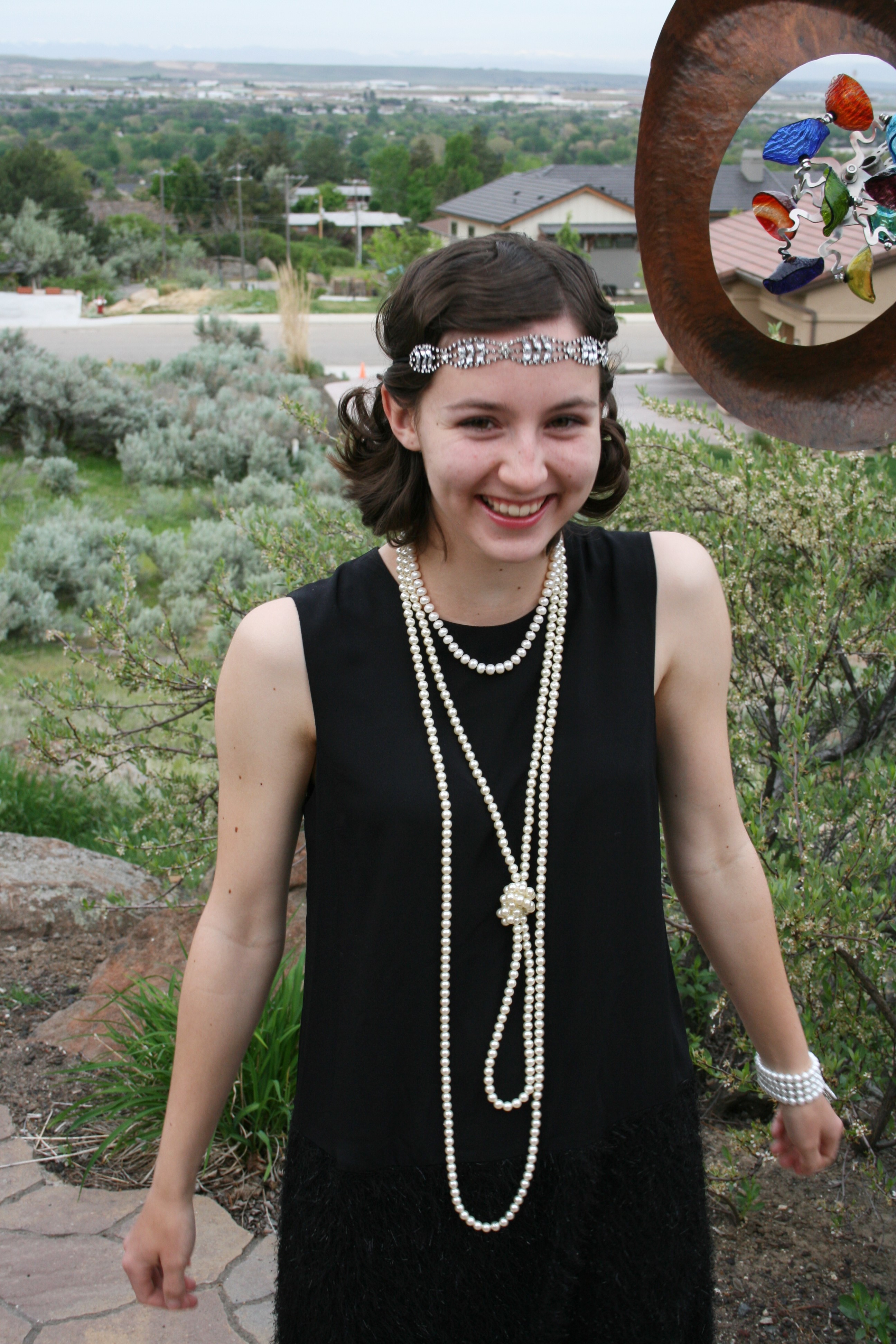 Goooooood afternoon! I didn’t get a chance to take outfit pictures yesterday (more like, I was just being lazy and didn’t want to) so I decided to round up some costumes I’ve worn in the past as more Halloween inspiration. If you’re trying to come up with a costume but are stuck, remember this: you don’t have to buy something new. Consider re-wearing an old costume, or make use of parts of past costumes and turn it into something cute/new. I give some ideas below for how to reinvent each of my past costumes into something I could wear now. (By the way, this Flapper Girl costume was from my school’s Decades Day two years ago.) 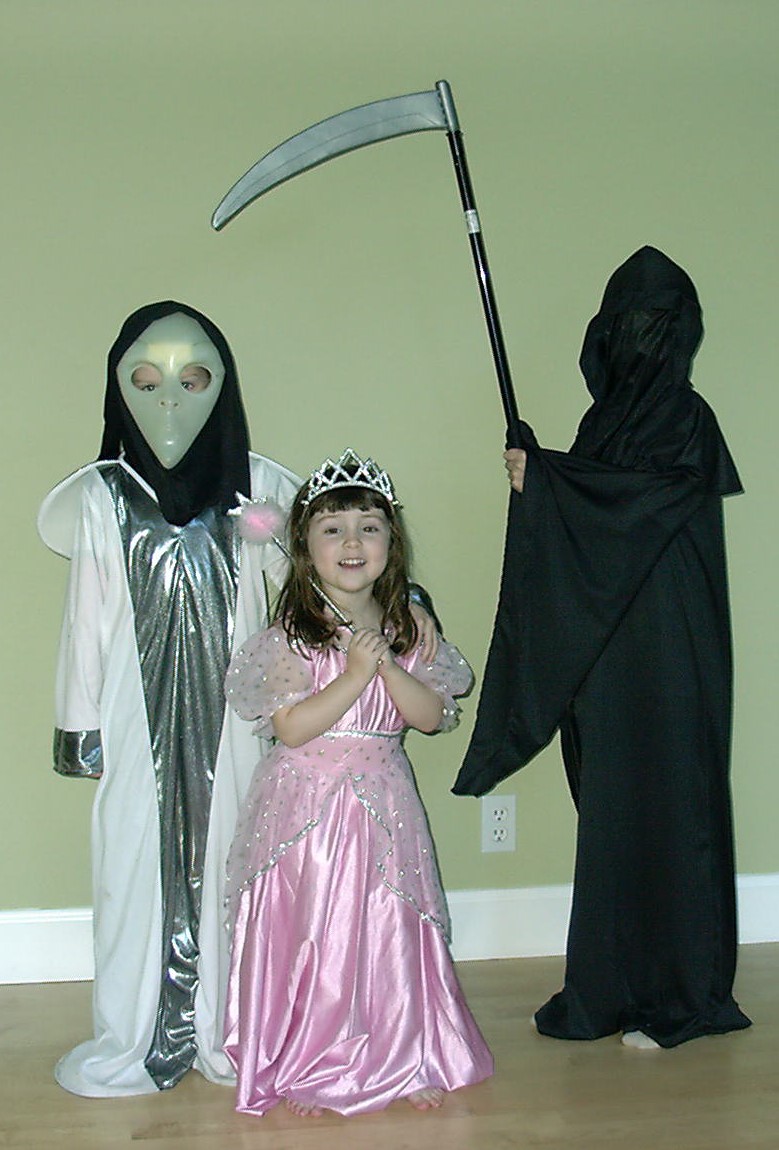 A princess seems like the easiest costume for a girly fashionista to recreate! All you need is a pretty, sparkly dress (hello, Homecoming!) and a tasteful tiara. This costume is really just an excuse to get all dressed up, and I always need more reasons to do that. 🙂 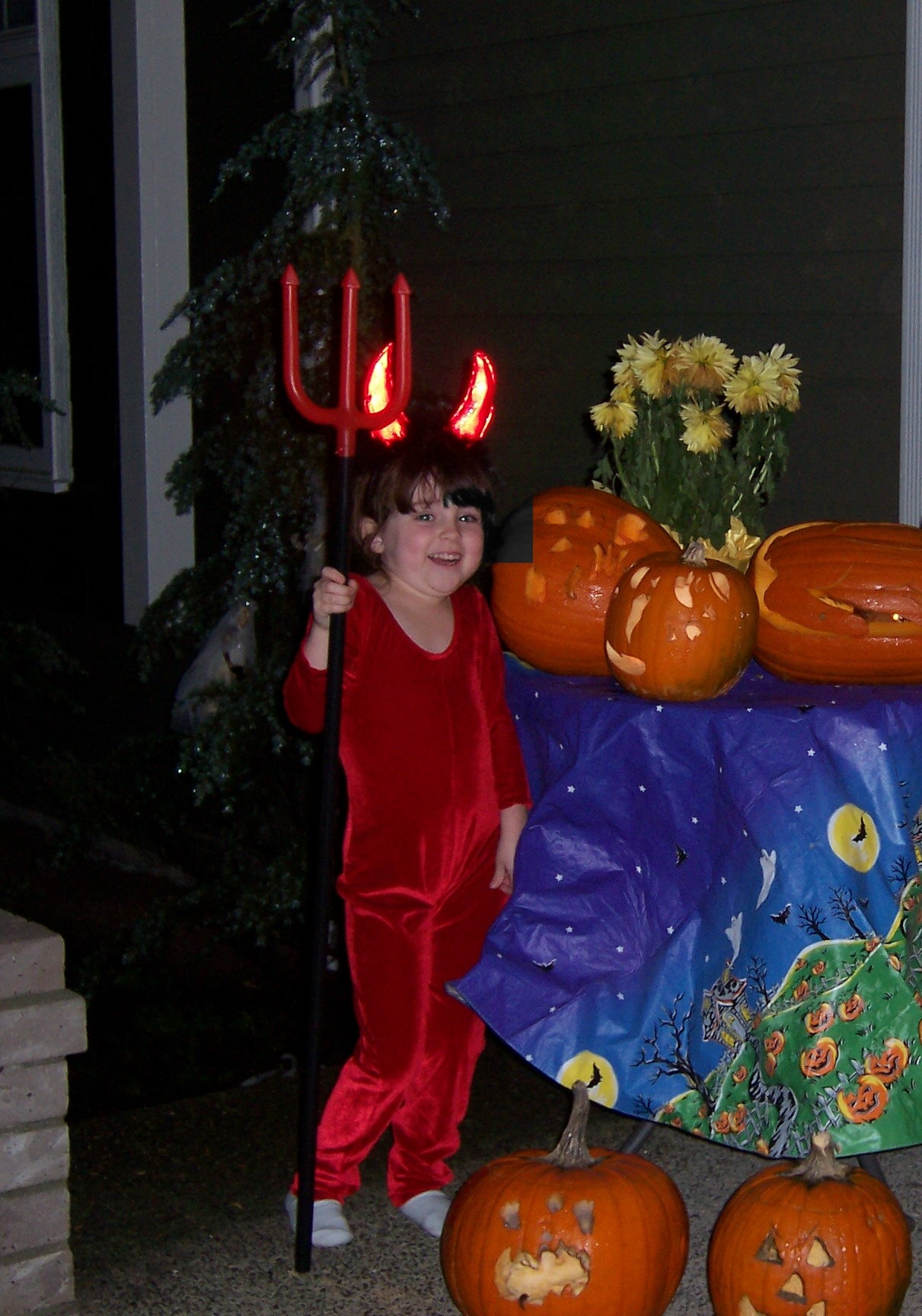 Even if you tried, I don’t think you could quite capture the essence of that double chin. While you probably don’t have a red velvet body suit (at least I hope you don’t), you could easily just wear a red dress or all red outfit with a pair of horns (and possibly a tail). Pitchfork optional. Or if you have a bad personality you don’t even have to dress up! KIDDING, that was savage. 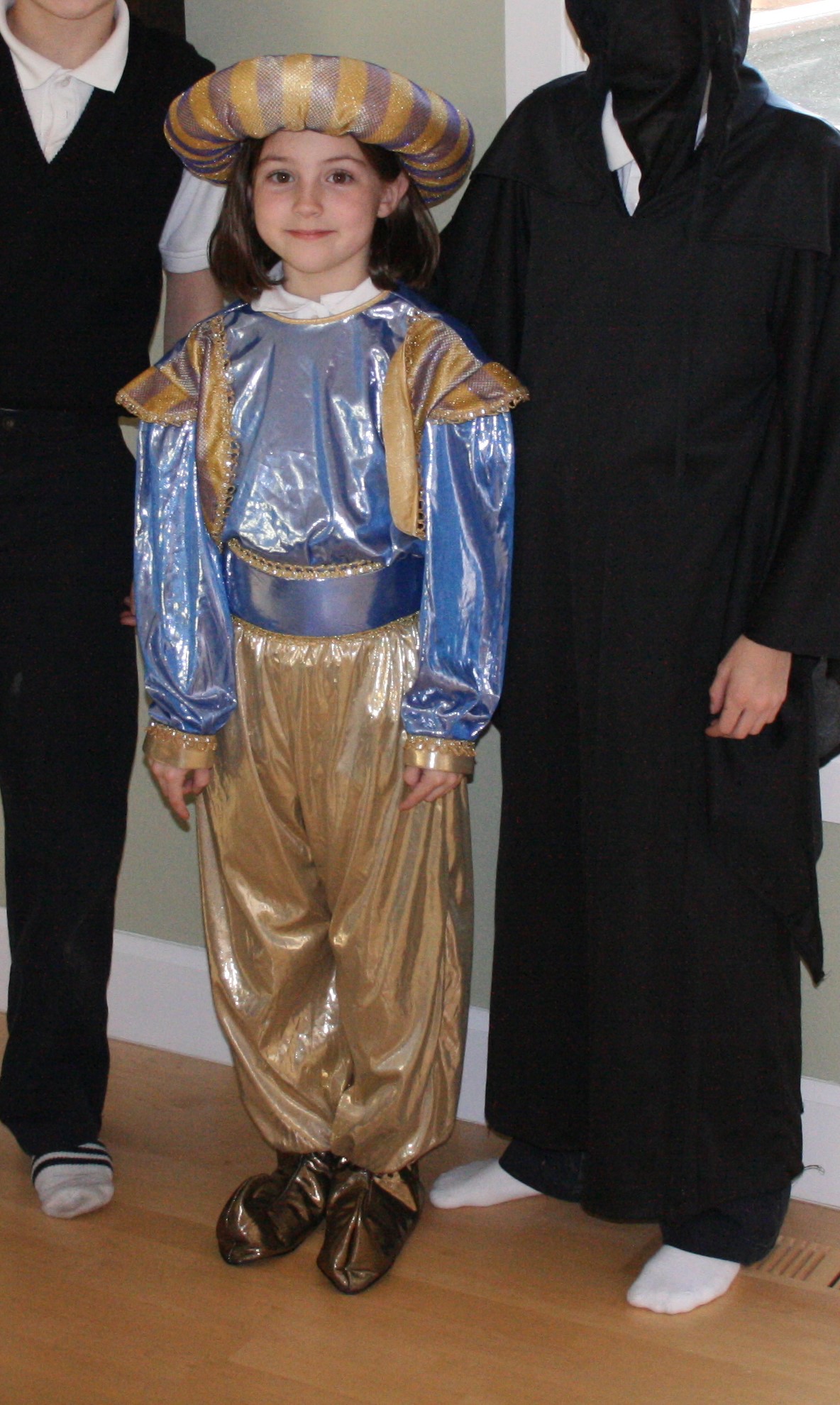 I’m not really sure how you can recreate this look…or if you’d even want to. I feel like it’s a cross between a bad 90s hip hop artist with harem pants and some back-up dancer from the 80s. Either way, remember these pants, ‘cause they’ll be in a whole new world later on in this post. 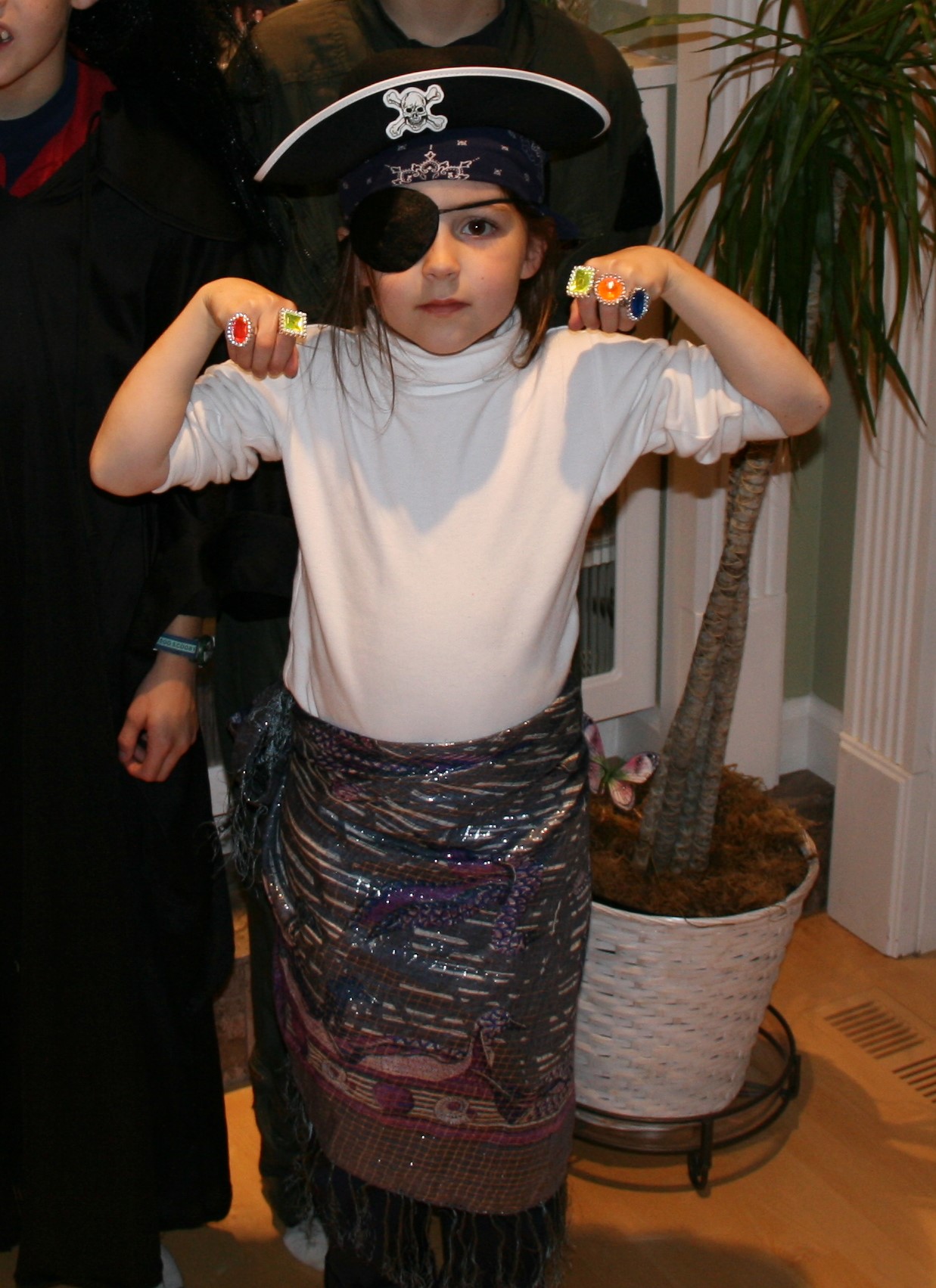 Apparently a white turtle neck is a super pirate-y look…Nah, but if you have a white blouse that’s kind of puffy, then that would be great. Throw on a bunch of rings, an eye patch, a bandana, and a pirate hat and you’re all set. For an added bonus, you can add a strange gypsy scarf around your waist (?). 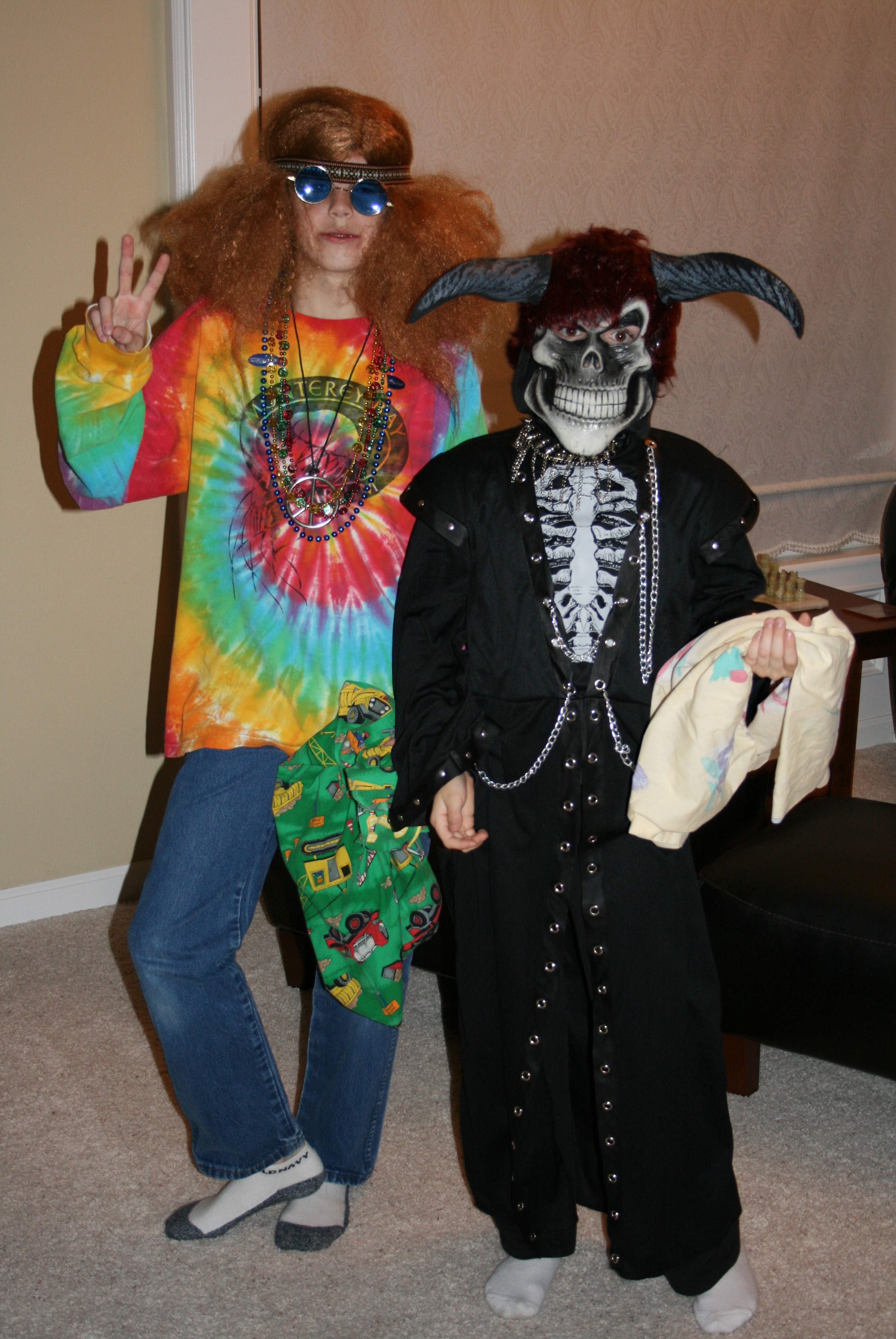 Okay so technically I’m that weird skeleton creature on the right, but the hippie costume is easier to recreate. Grab a tie-dye tee, krimp and tease your hair to no end, add some peace sign accessories, and rock the bell-bottom pants, which are actually back in style. Have a nice night, mannnnnnn.

I’m not really sure what I was thinking with this costume…I think it was just one of those times where I wanted to wear as many costume items as possible. I mean, the torn dress thing is a ghost costume and underneath I’m wearing baseball pants and soccer socks. Interesting choices. Nonetheless, a pretty angel costume can be made with a white dress, ethereal makeup, fake wings, and a halo headband. 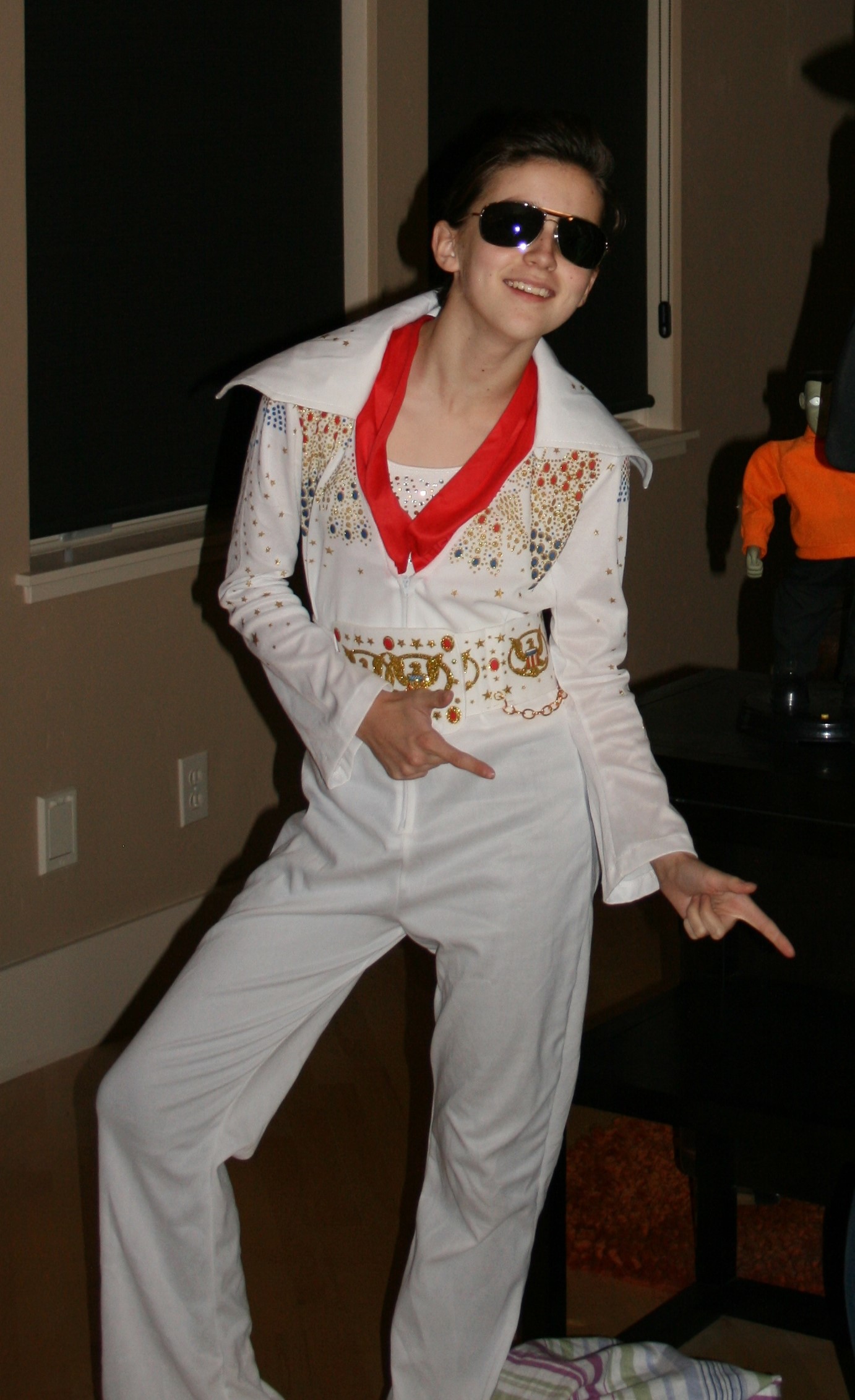 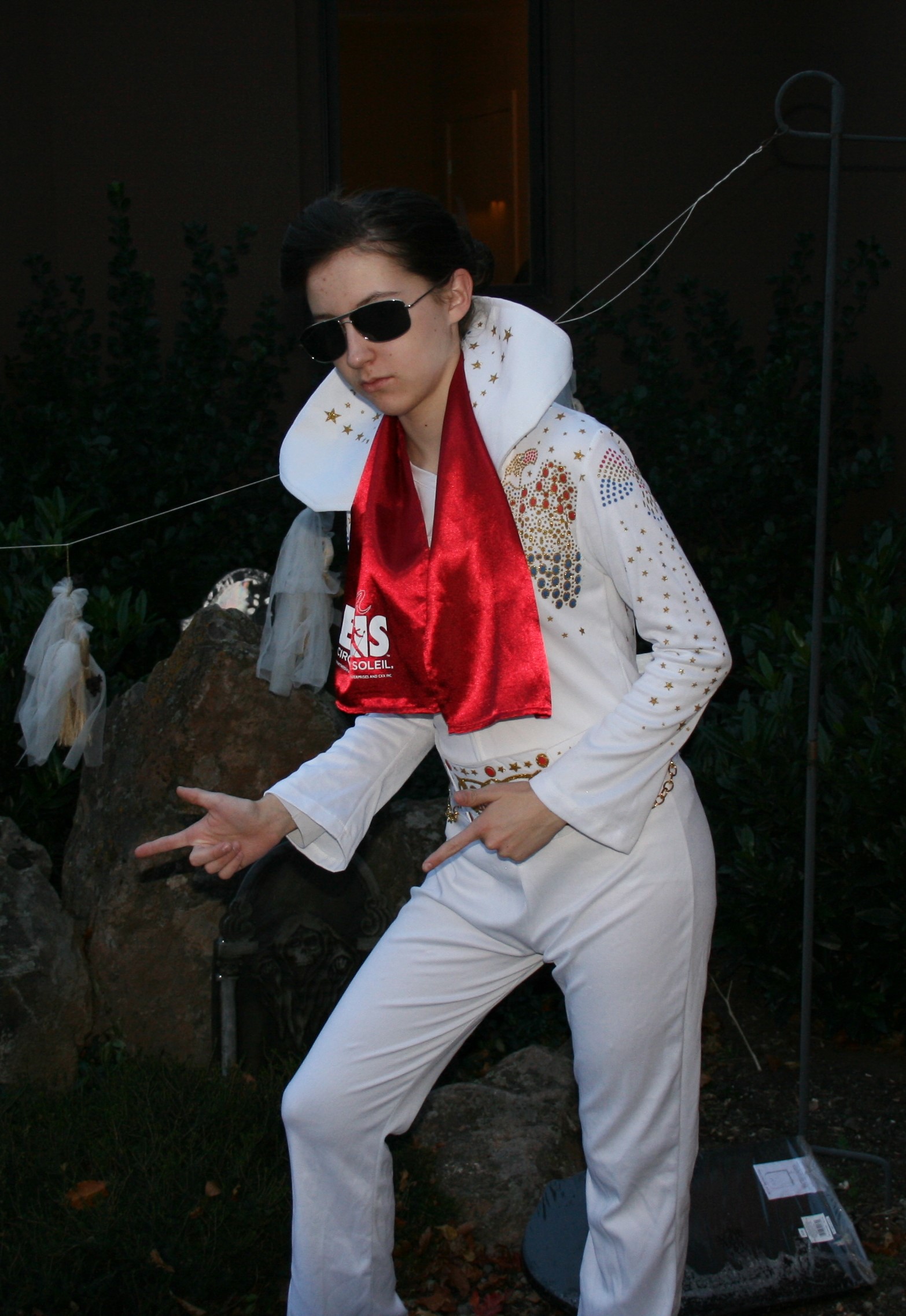 Okay, I went as Elvis for a few years in a row, and while some of you may think that’s strange, I got a TON of candy from old people on those nights. 😉 (Although that was not my intention; I actually really loved this costume.) The funny thing is that this jumpsuit is actually a Sexy Elvis costume!! I just bought it really big and wore a tank top underneath. I suppose you could wear a white jumpsuit to recreate this, but I really just wanted to share the look with you for fun. Also, it’s hard to tell in these pics, but I put a big roller in the front of my hair so it looked like I had the Elvis curl. 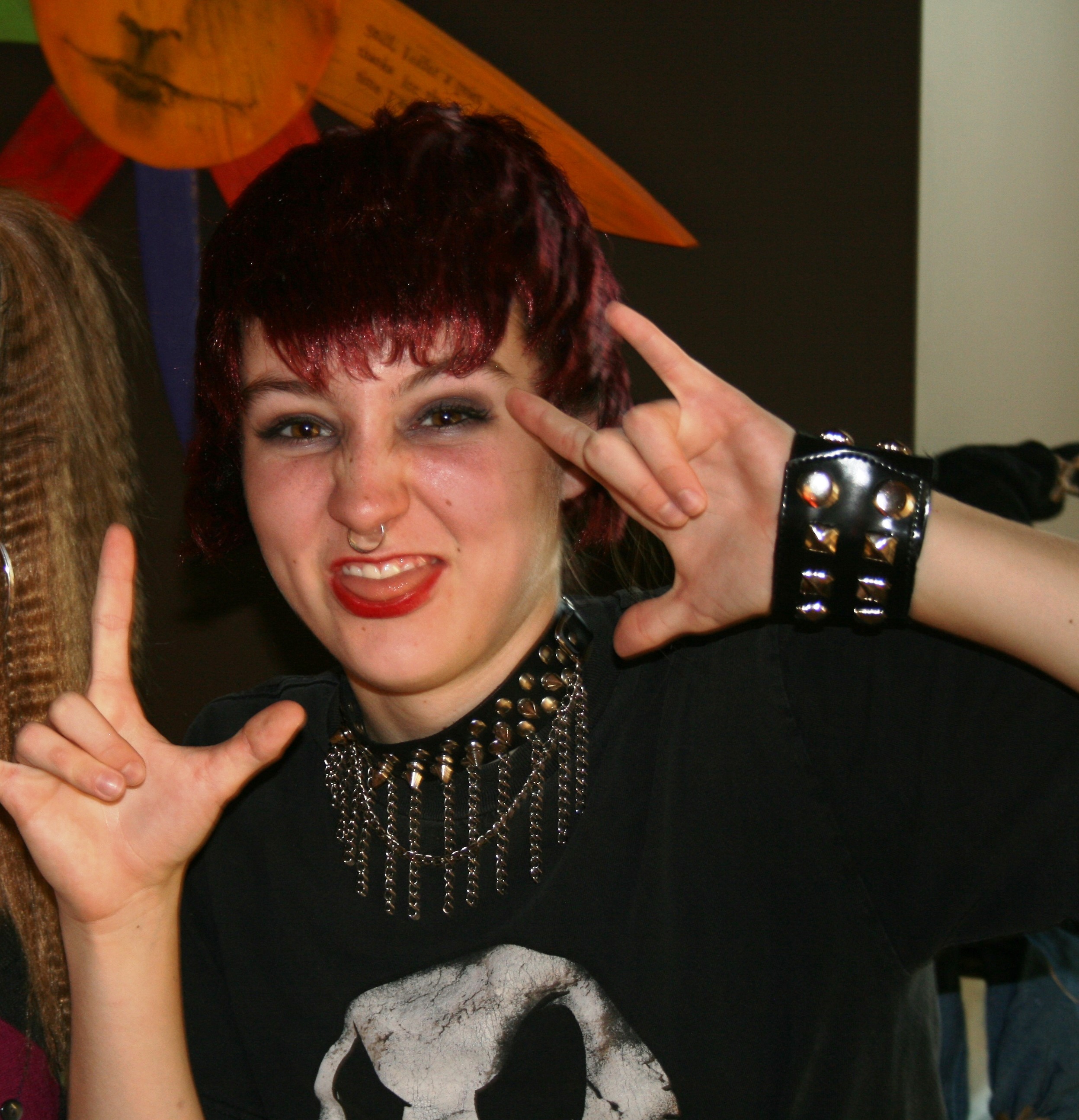 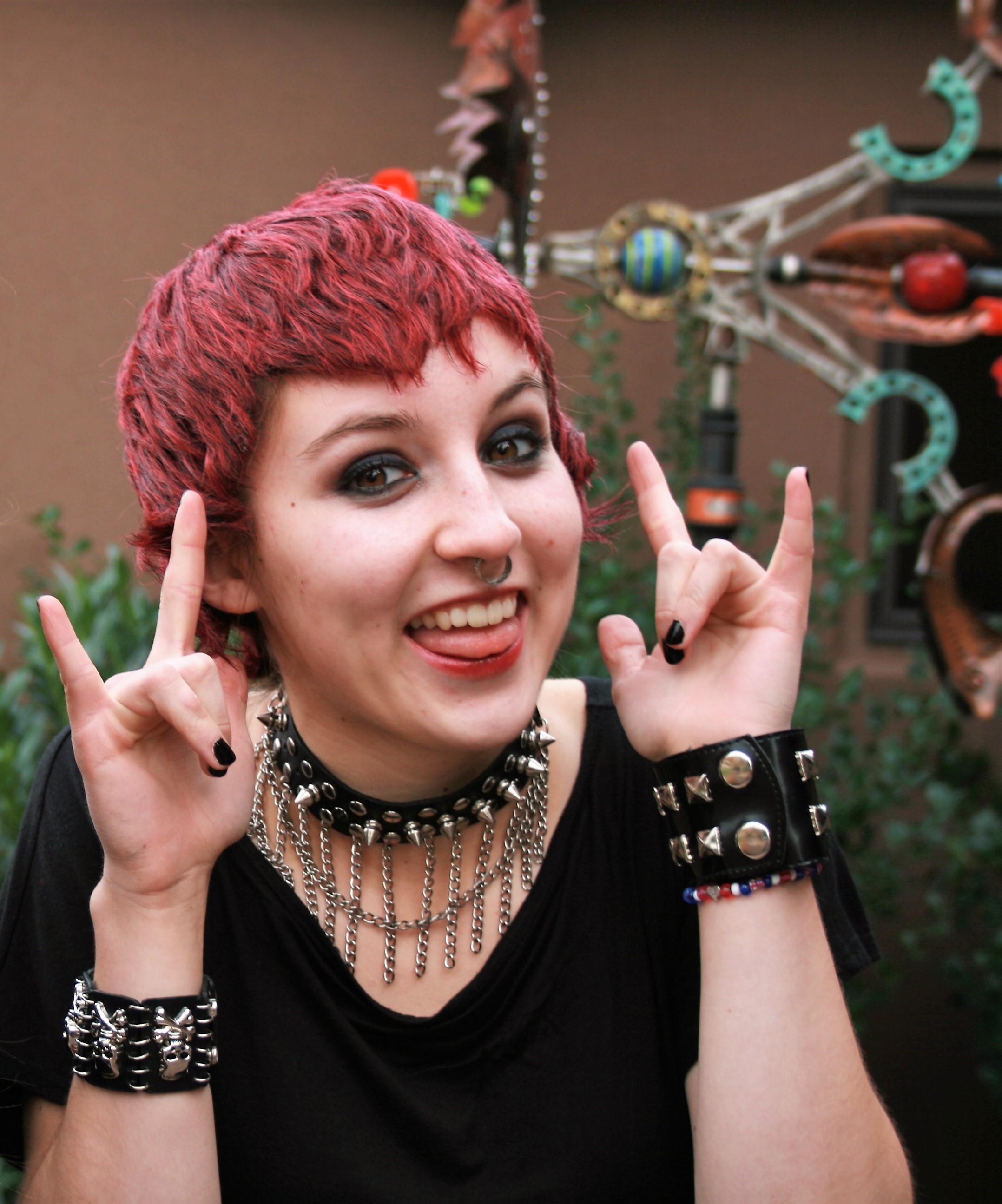 As you’ve probably already seen, I went as a goth last year (and the two years before). Even without the wig, this is a simple outfit with some black clothes, dark makeup, and a toe ring as a fake nose piercing. Clearly this is the signature pose for a goth person. 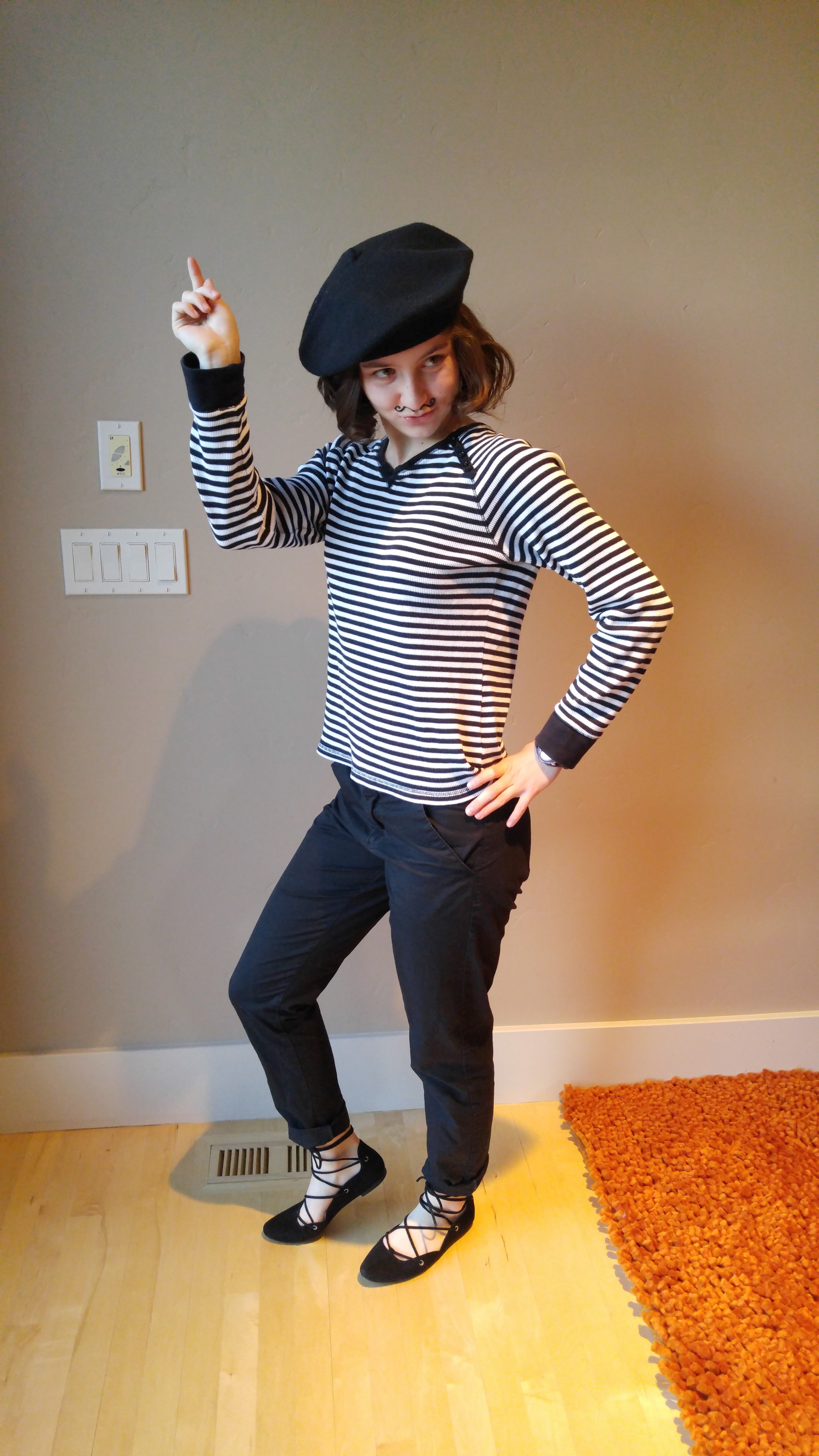 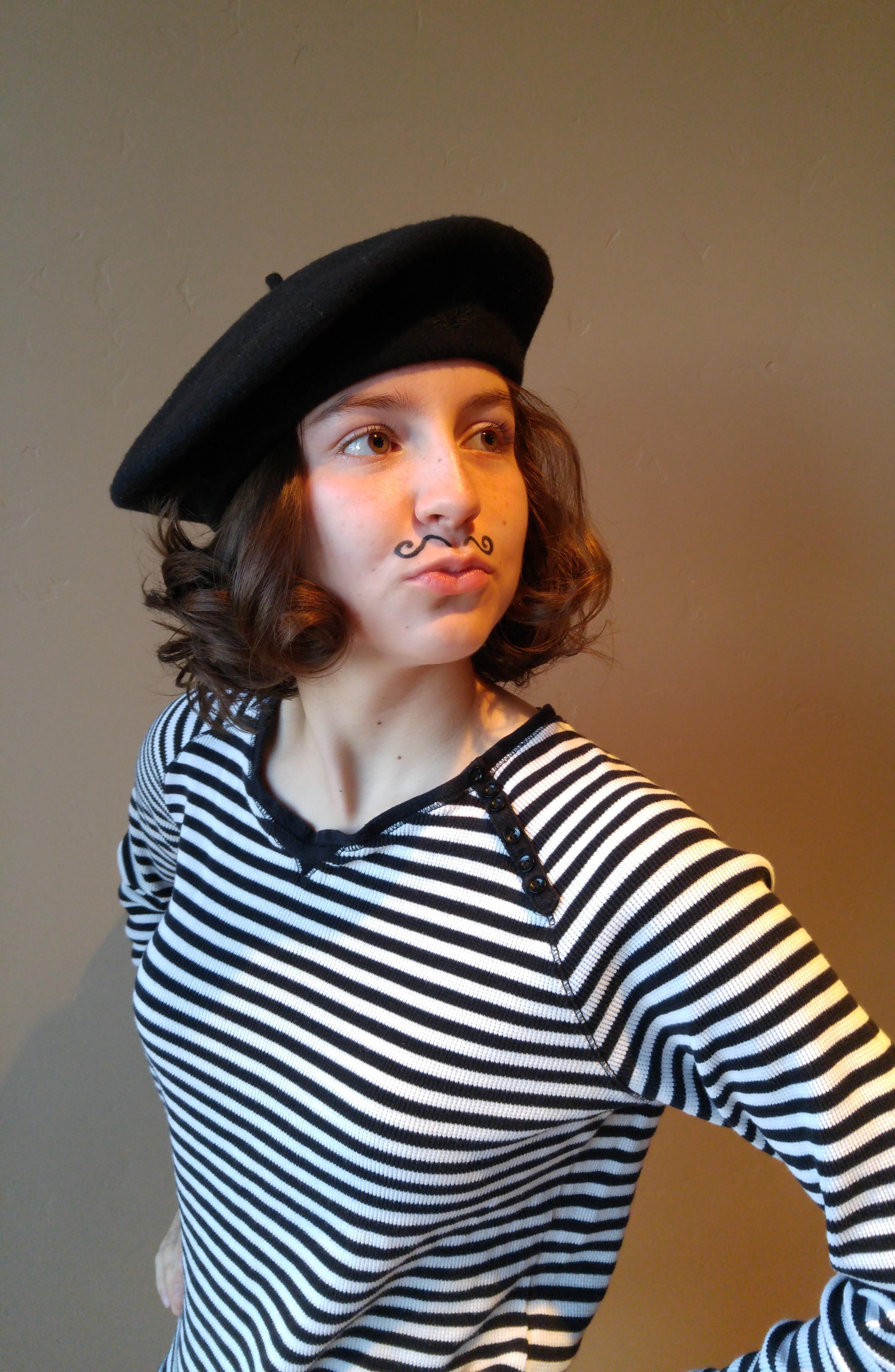 I honestly don’t remember what this costume was for…Maybe International Day at school? Anyways, this look could also transform into a mime with some white face paint. I remember in 6th grade (somewhere around there) mimes were ALL the rage for Halloween costumes. Still not really sure why, but I suppose it’s an easy costume. 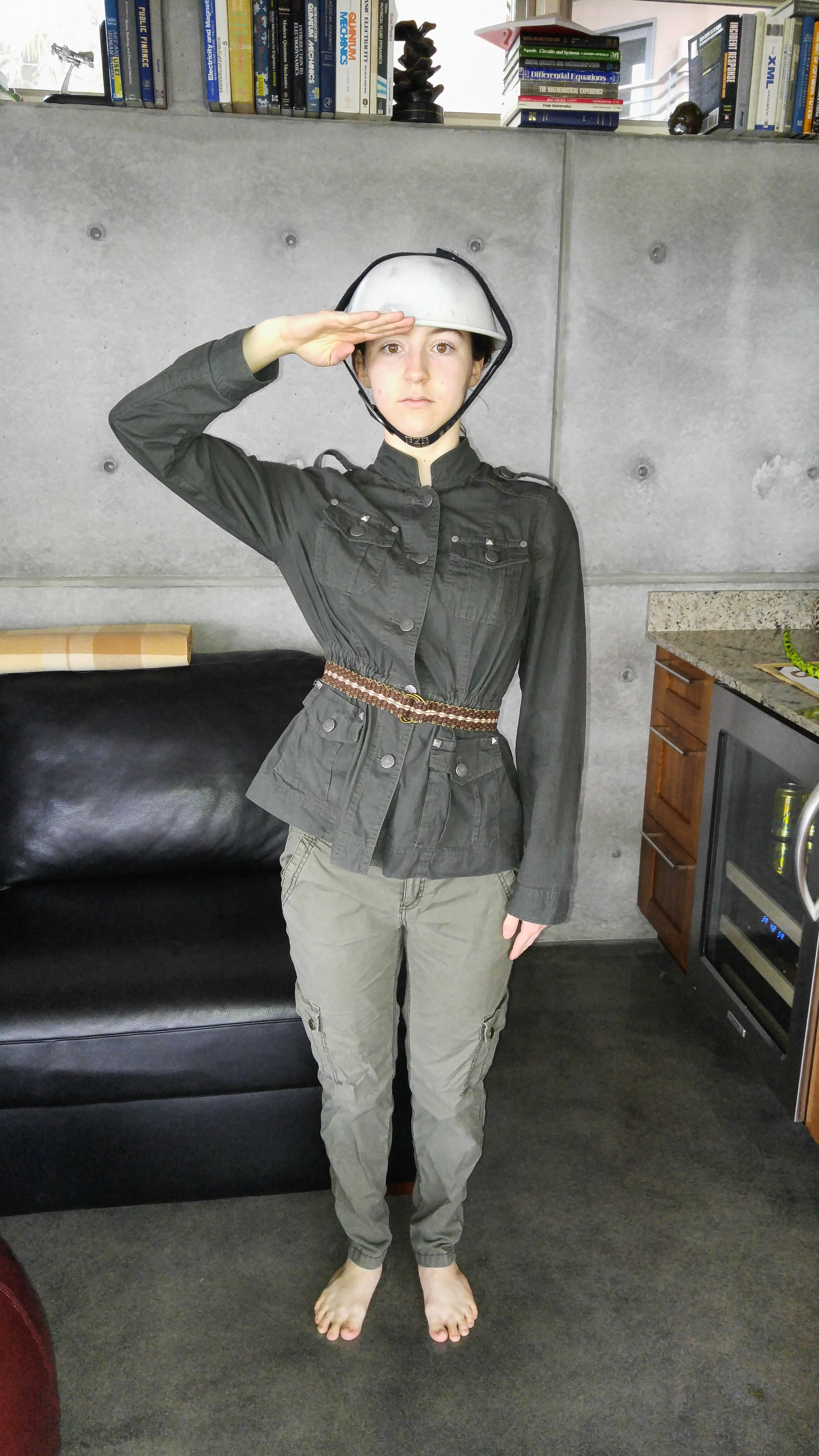 Like the Elvis costume, this is just an outfit I wanted to share. I was offered extra credit in my World History class sophomore year if I dressed up, so of course I did! This is my favorite military jacket, my army green cargo pants, a few belts, and a tin bucket on my head. 🙂 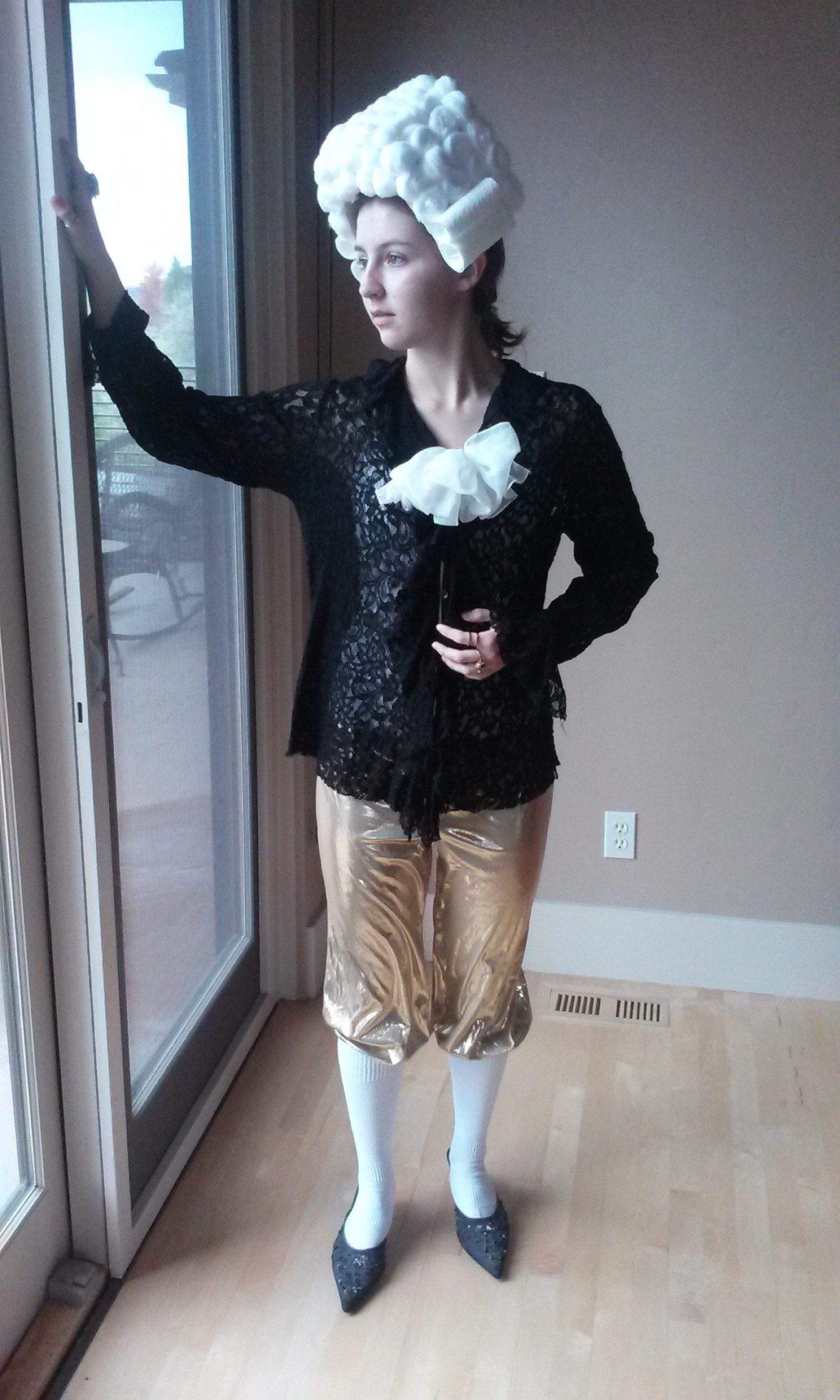 This is honestly my favorite costume ever!! It makes me laugh so hard. This also was for extra credit in history class. I went hunting for things I could use around the house, and it was so much fun envisioning normal clothing items in a way that would look like an old French dude’s outfit. The black lace blouse is my mom’s shirt, but the white fluffy thing is a very large hair bow clip. The pants are—you guessed it—those gold Aladdin pants from earlier. You can tell how much I grew! Luckily, those pants are really stretchy…The socks are just soccer socks and I wore my mom’s beaded, super pointy shoes. I made the powder wig out of a headband, poster board, cotton balls, and rolls of toilet paper. You better believe I got a ton of extra credit on that project. 😉 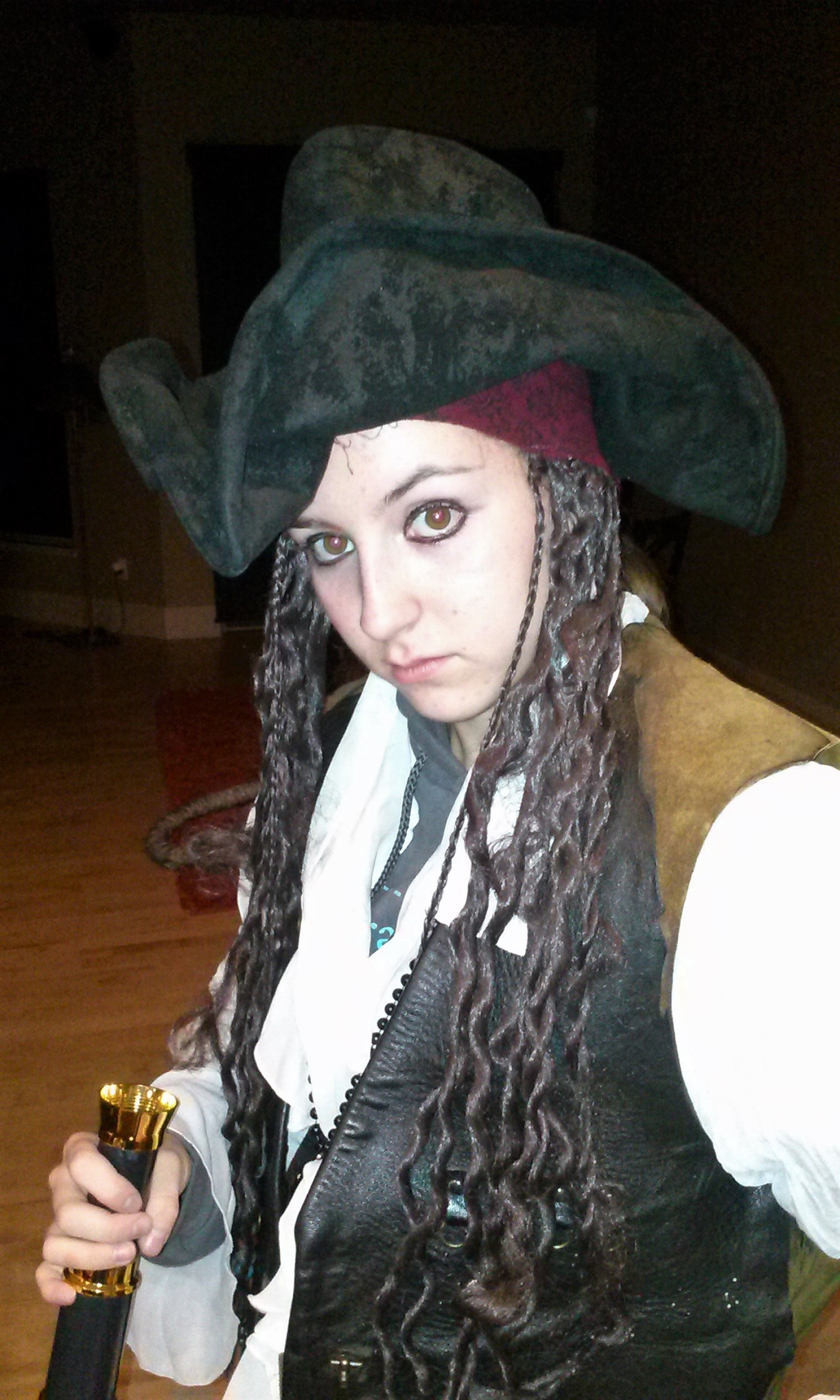 A second version of a pirate. This one is a lot more realistic than the gypsie scarf and white turtle neck… 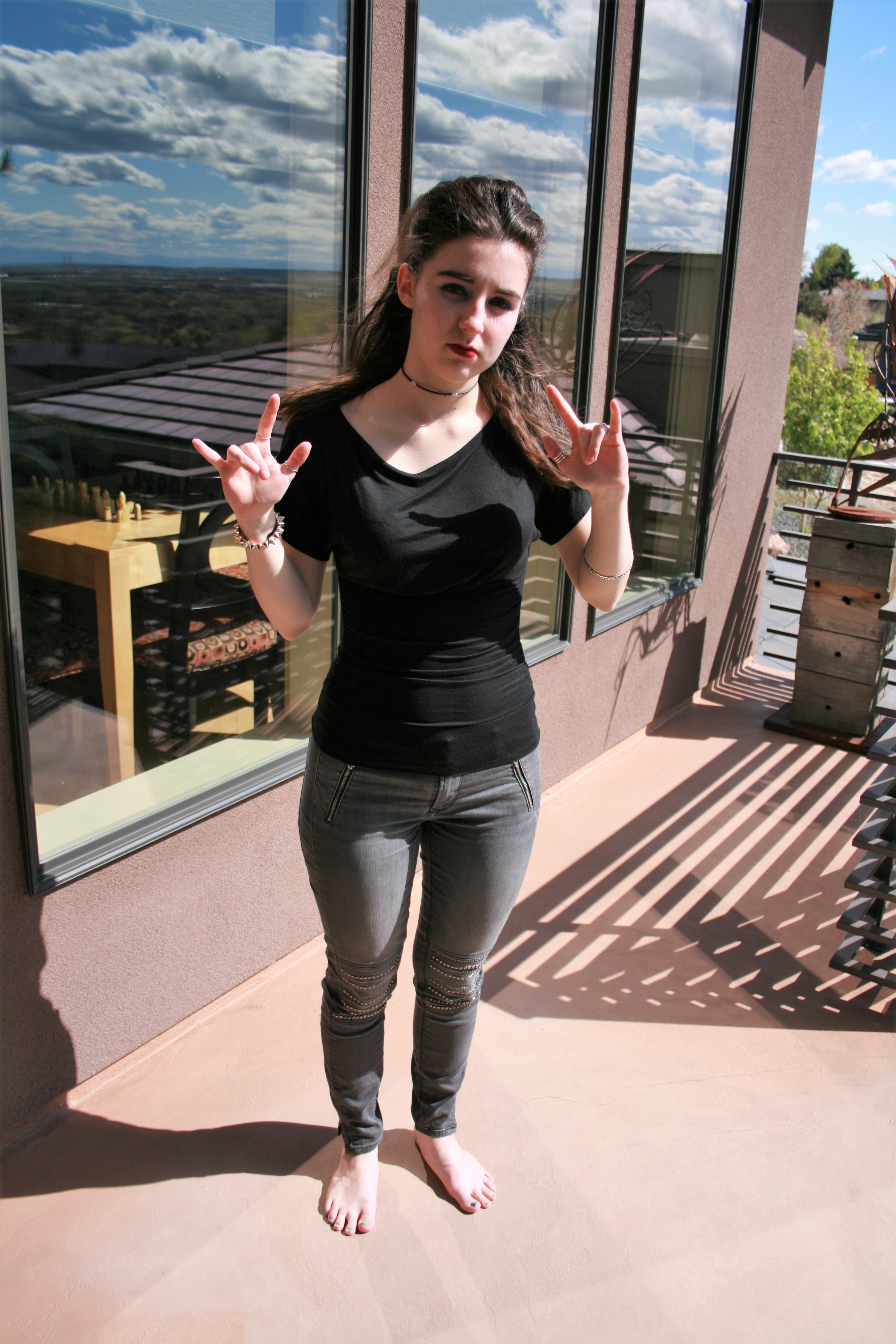 This picture is super unflattering because my legs look two feet tall, but this was for Rock ‘n’ Roll Day at school in the spring. I put a bunch of eyeliner in my eyebrows and wore dark makeup, similar to my goth costume. The goal for the hair was slicked back on the sides and super tall and poofy on the top of my head, but it didn’t work out quite like I had imagined…

I hope you enjoyed this post! I had a fun time reminiscing on all my past costumes, and it gave me some ideas for this year’s outfit—hopefully it gave you some ideas also. 🙂 I’m considering buying a bunch of fake snakes and making a Medusa head-piece. Thoughts?

Thanks so much for stopping by today and sorry this post is going up so late!

5 comments on “Costumes Through the Years”