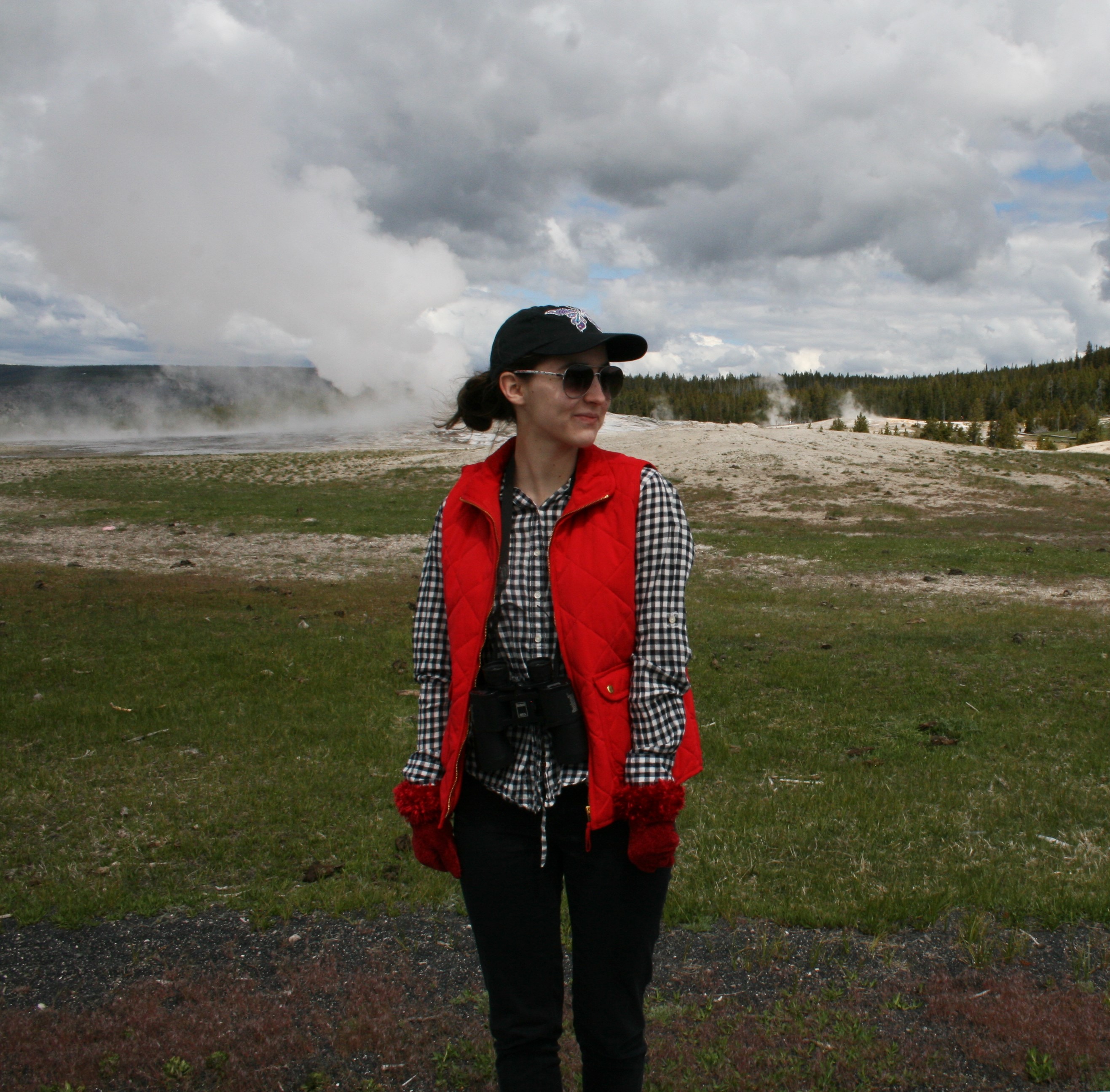 Hello! Sorry I’ve been a little MIA these past few days, but as promised last week on Instagram, I’m back today with the start of my summer travel series. This series will focus on small weekend trips and topics such as where to stay, what to do, what to pack, and what kind of fashion I noticed while there. First stop? West Yellowstone, Montana. Let’s get started! 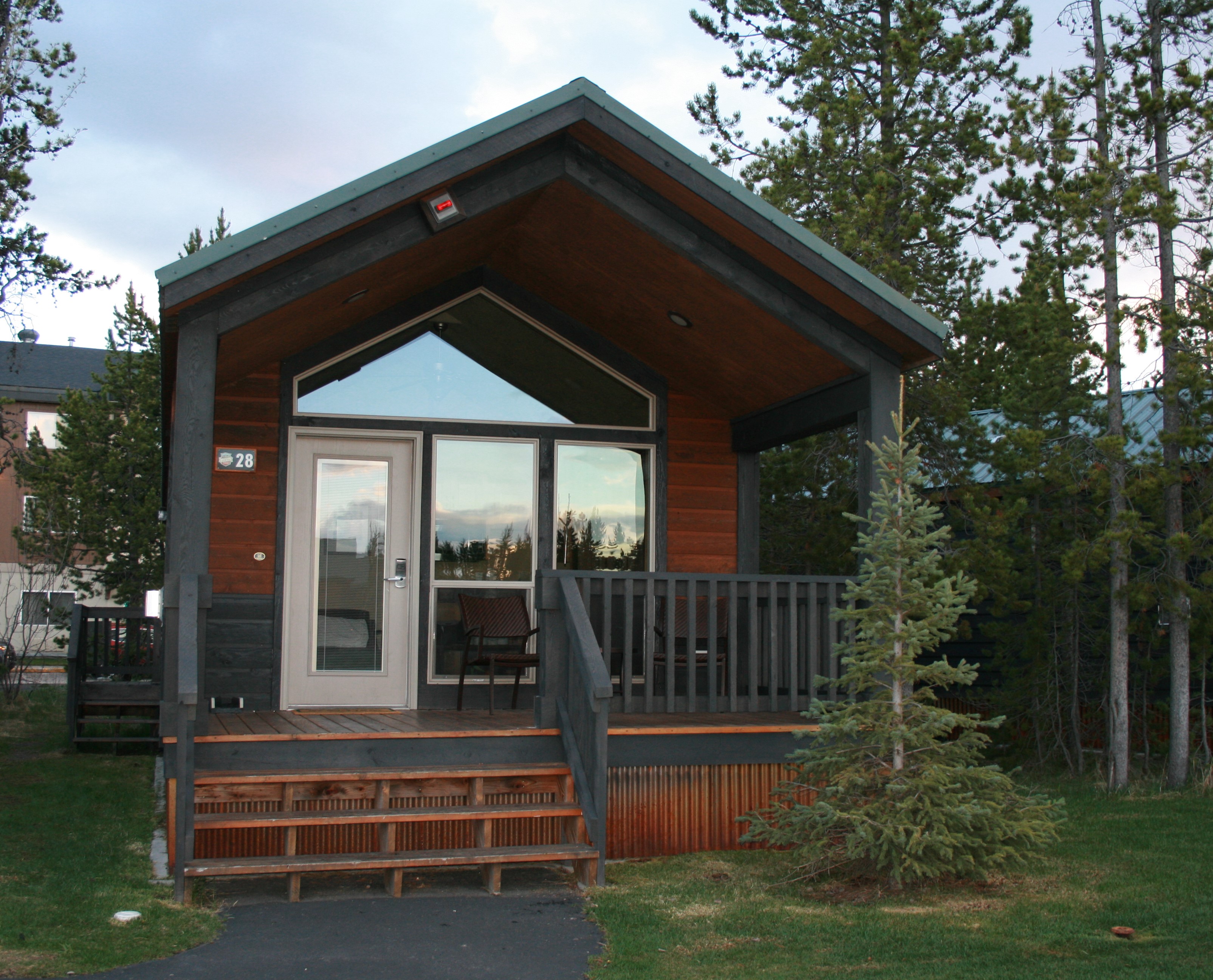 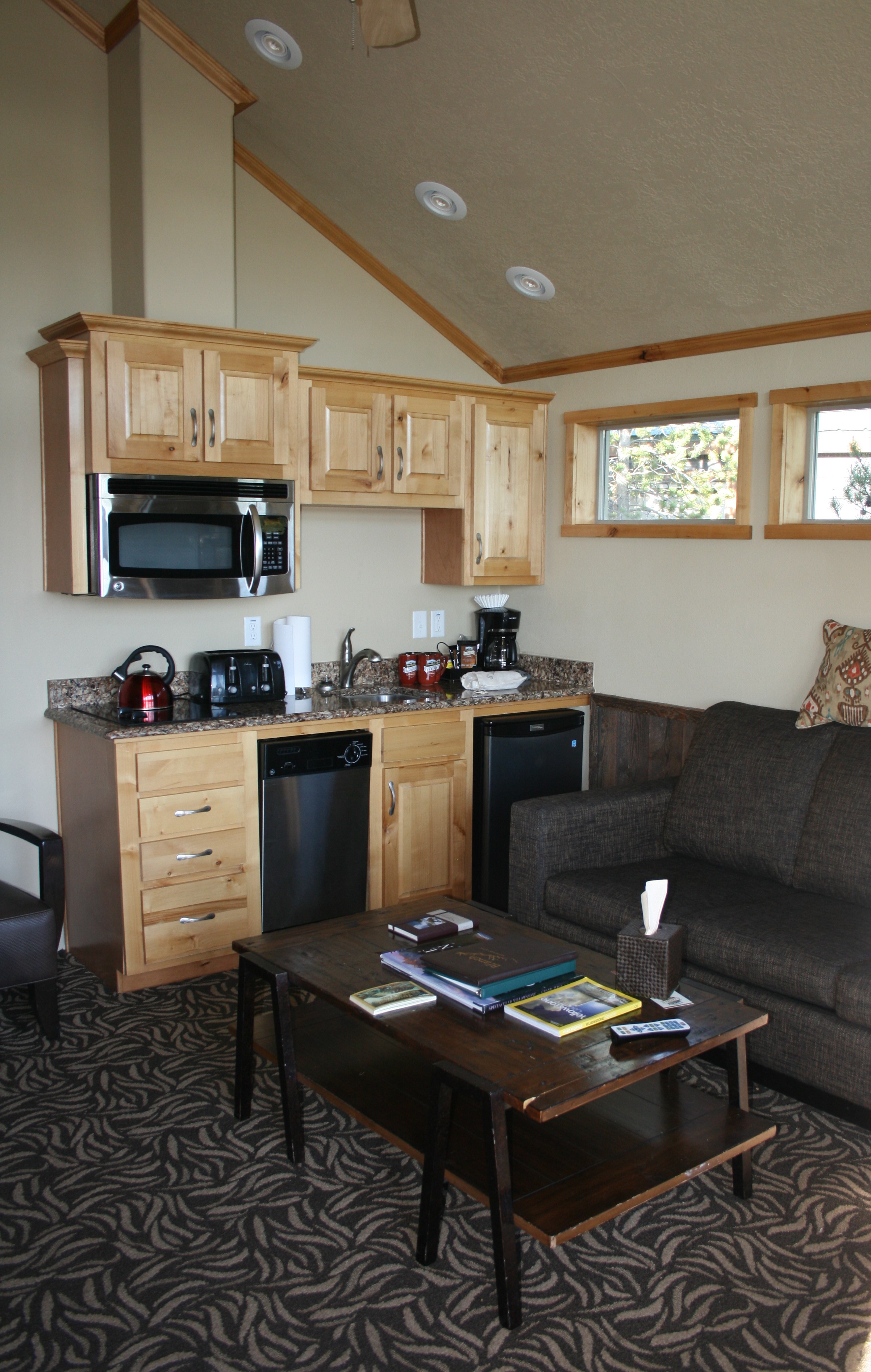 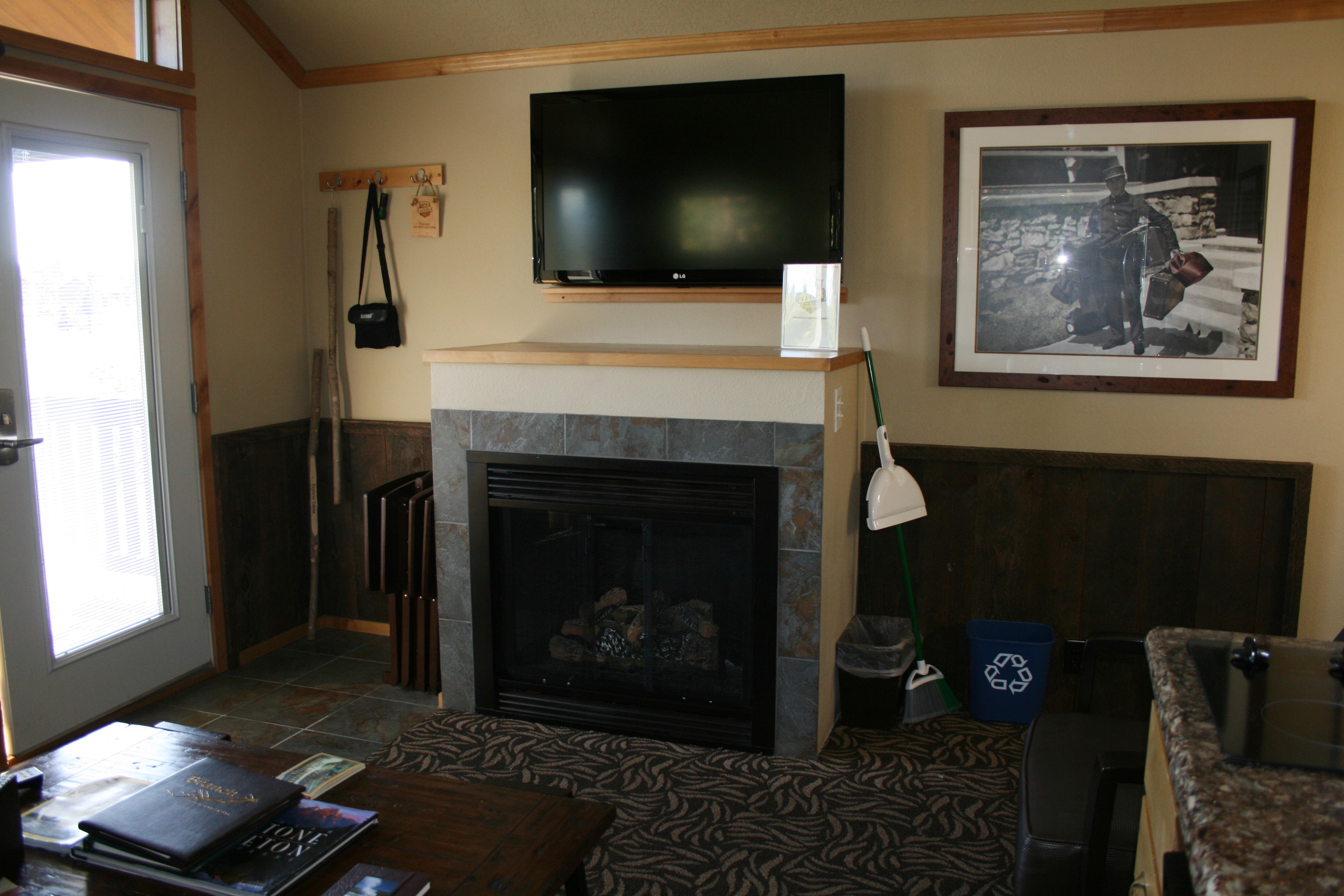 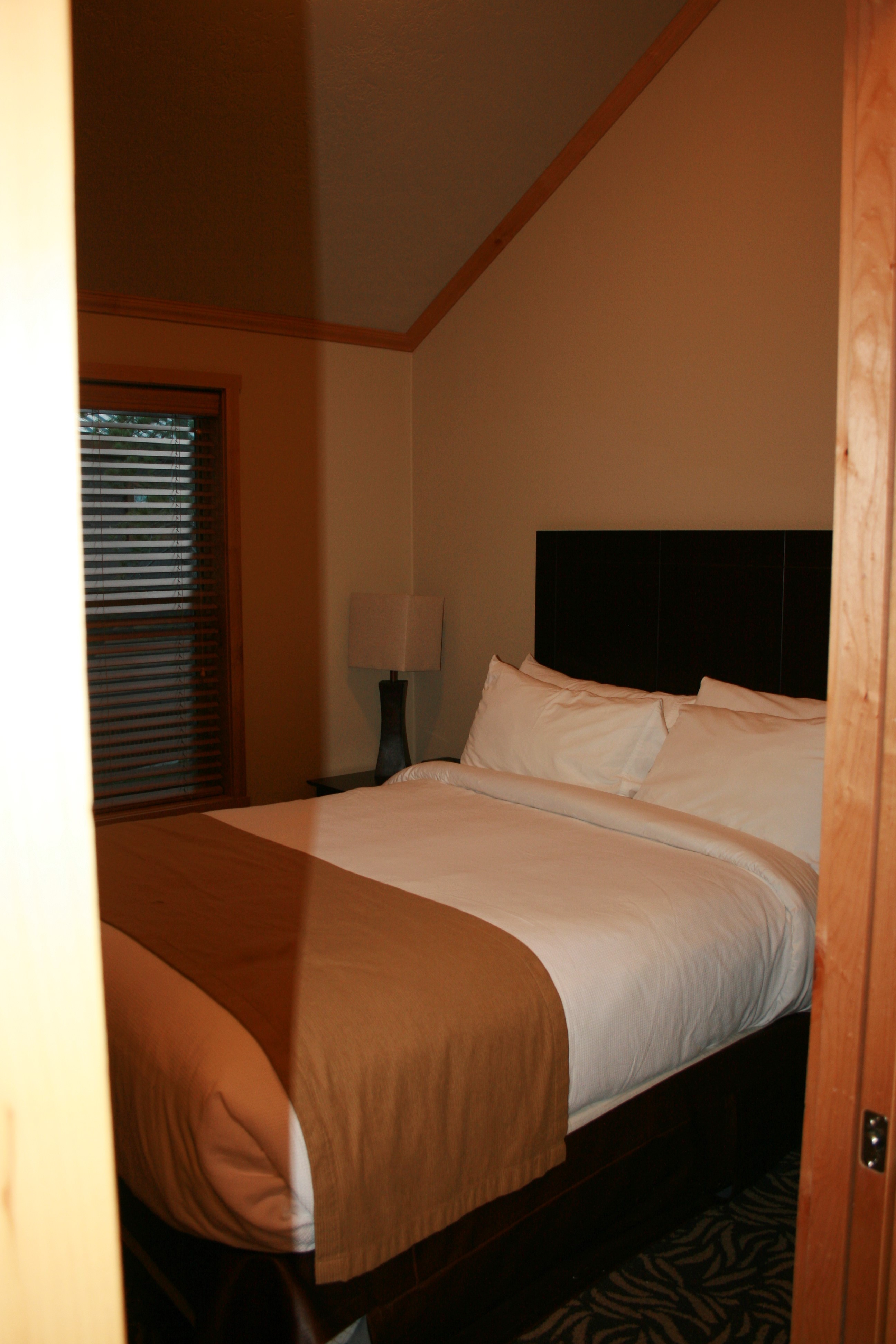 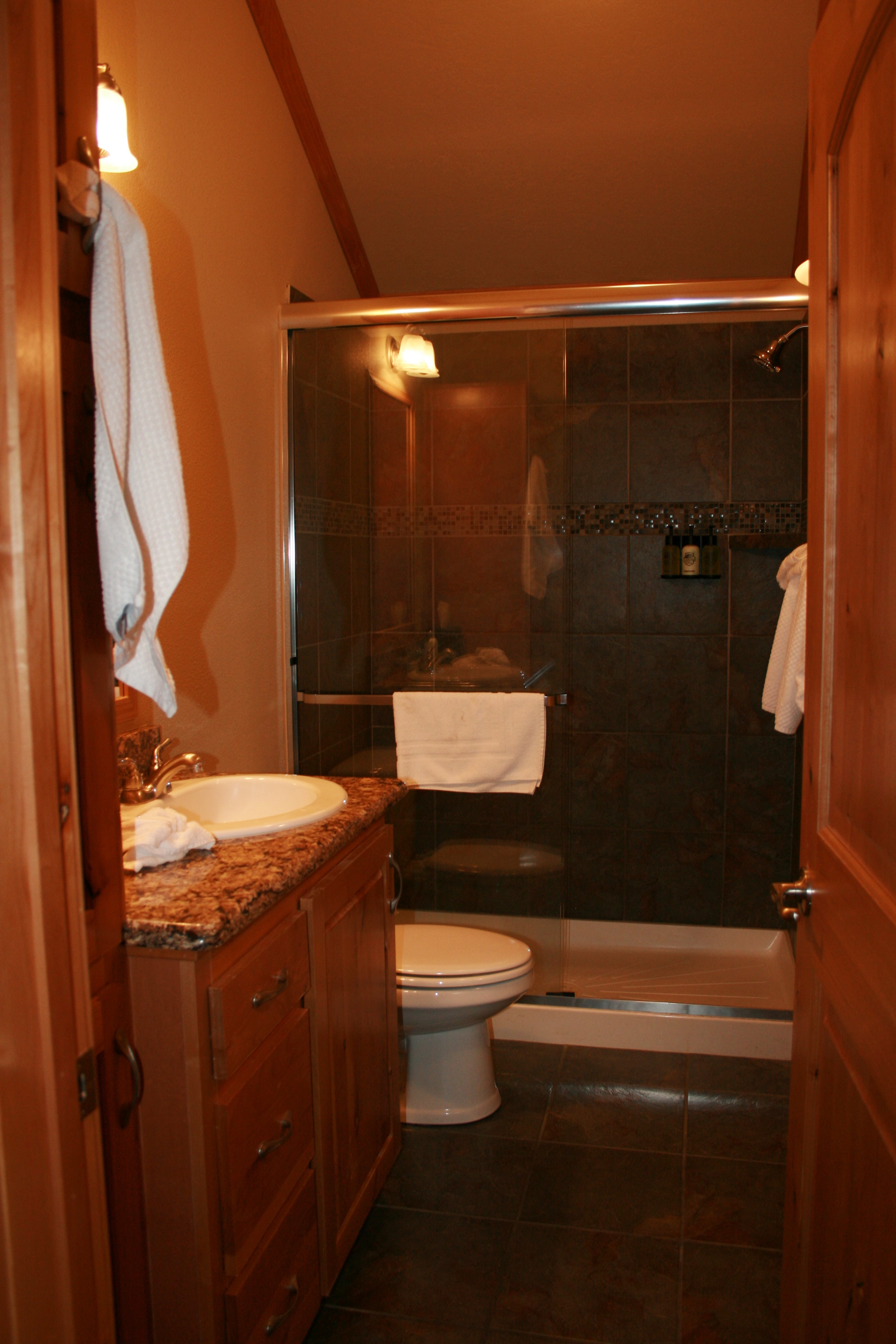 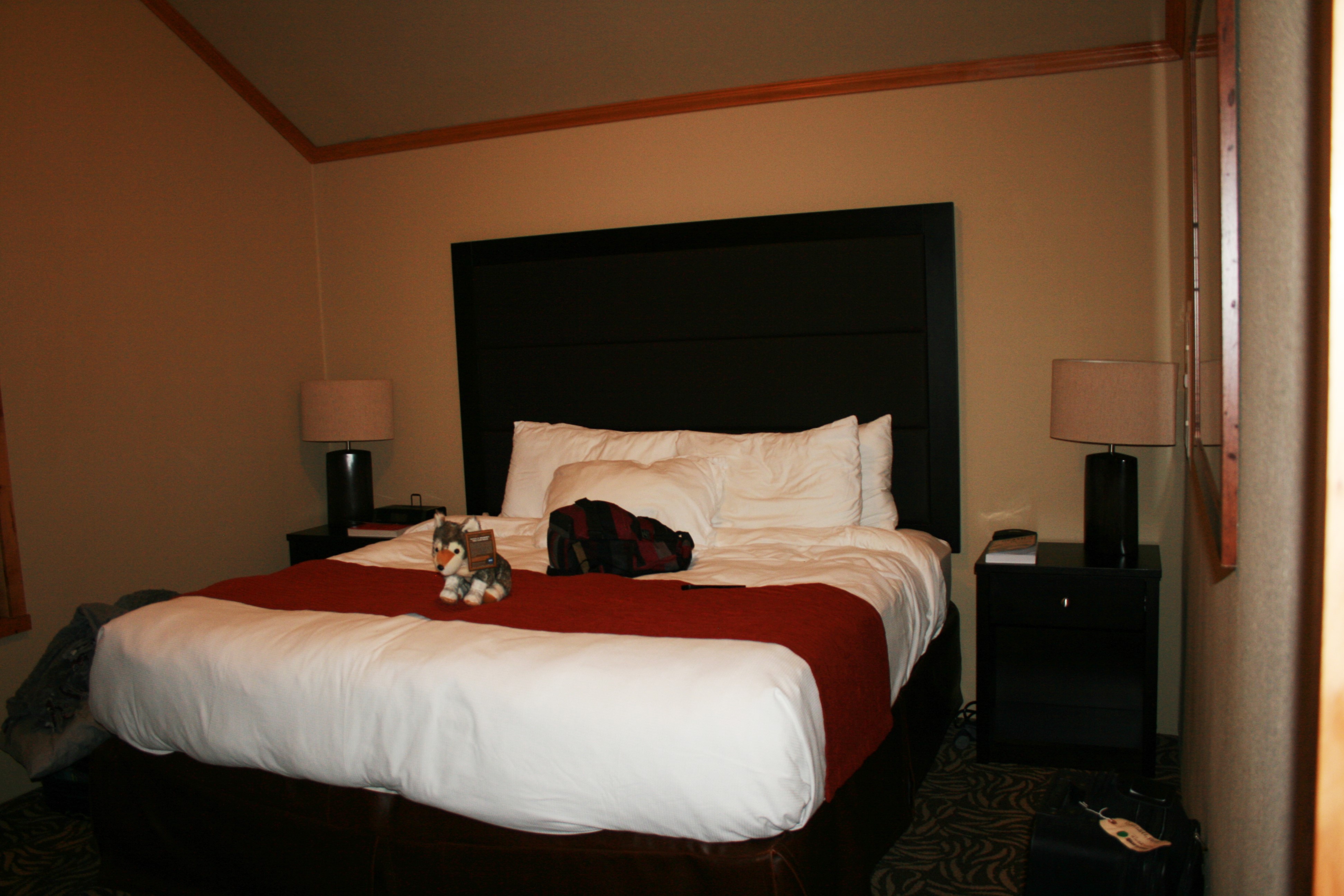 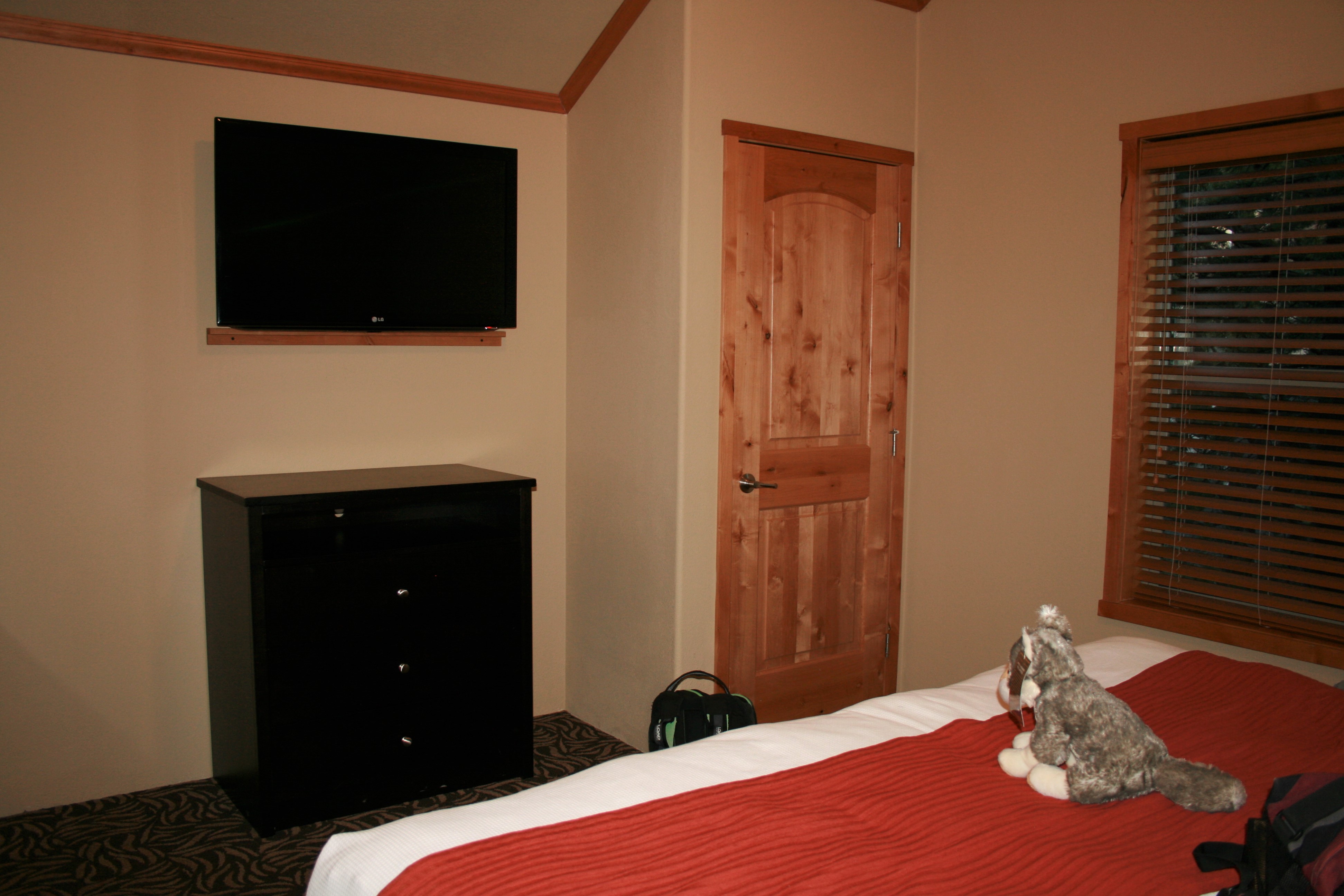 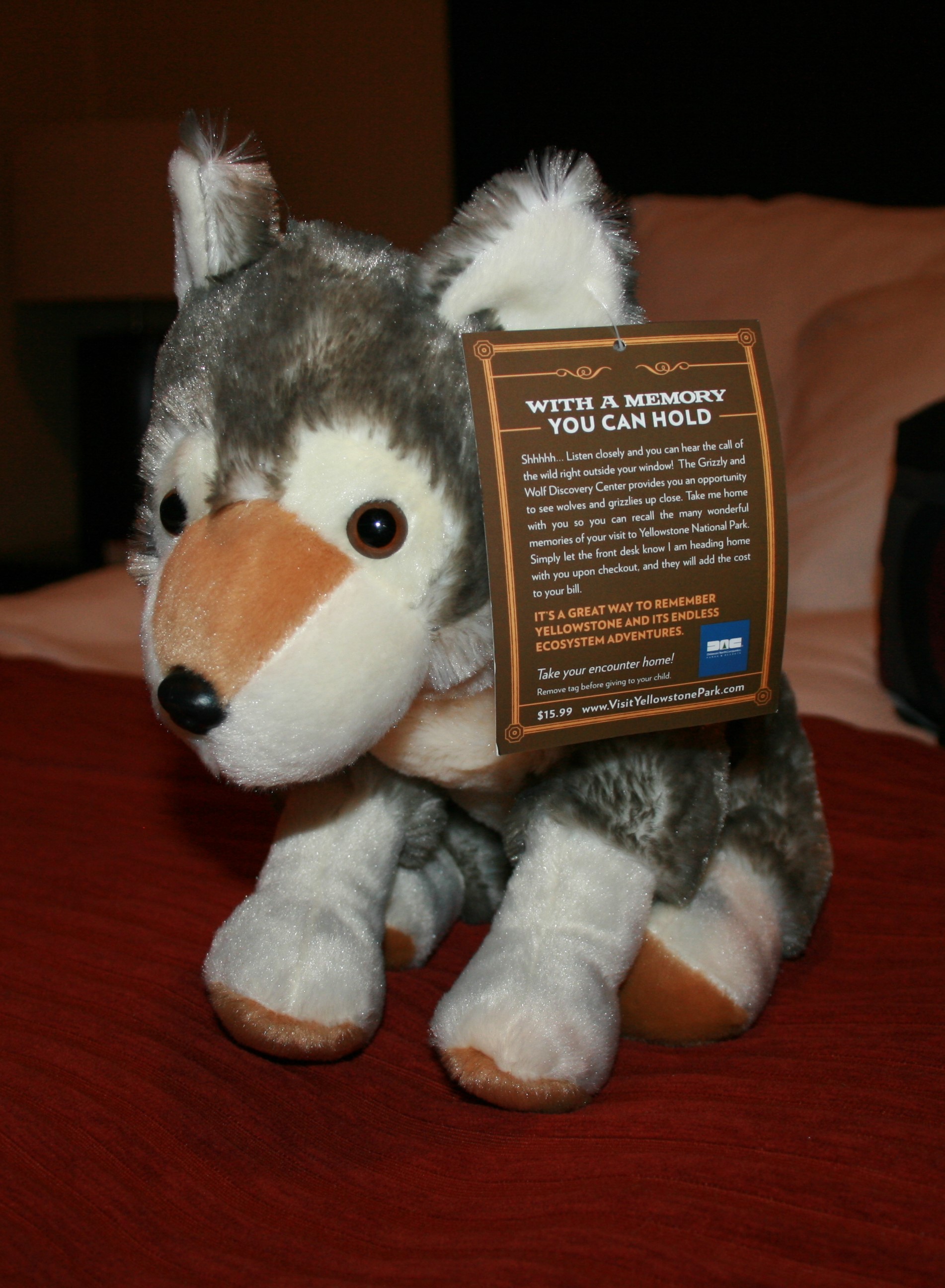 Instead of going the traditional hotel route, we chose to stay in the Explorer Cabins (check them out on Trip Advisor here). This was such a great choice! The cabins are located within walking distance of restaurants, shopping, and the Grizzly and Wolf Discovery Center (which I’ll talk about more later on). After exploring West Yellowstone for a few days, we were glad we chose the Explorer Cabins because of both their location and how nice they looked compared to some of the other places. It felt like we actually lived there in a cabin of our own!

As far as the actual amenities go, there were two bedrooms, one bathroom, a kitchenette, and a living room. There was plenty of room, and it was much nicer than staying in a hotel room because you had all the space to yourself and didn’t have to worry about hearing people next door.

The cabins provided walking sticks, TV dinner trays (so fun, but we didn’t get a chance to use them), binoculars, and a kit to make s’mores. There were a couple of outdoor fires scattered around the cabins which came on automatically at night. It was really fun to hang out there, eat our s’mores, and meet others staying in the cabins. Beware though, the s’mores kits are pretty small, so you may consider bringing your own supplies! They provided marshmallow sticks though. 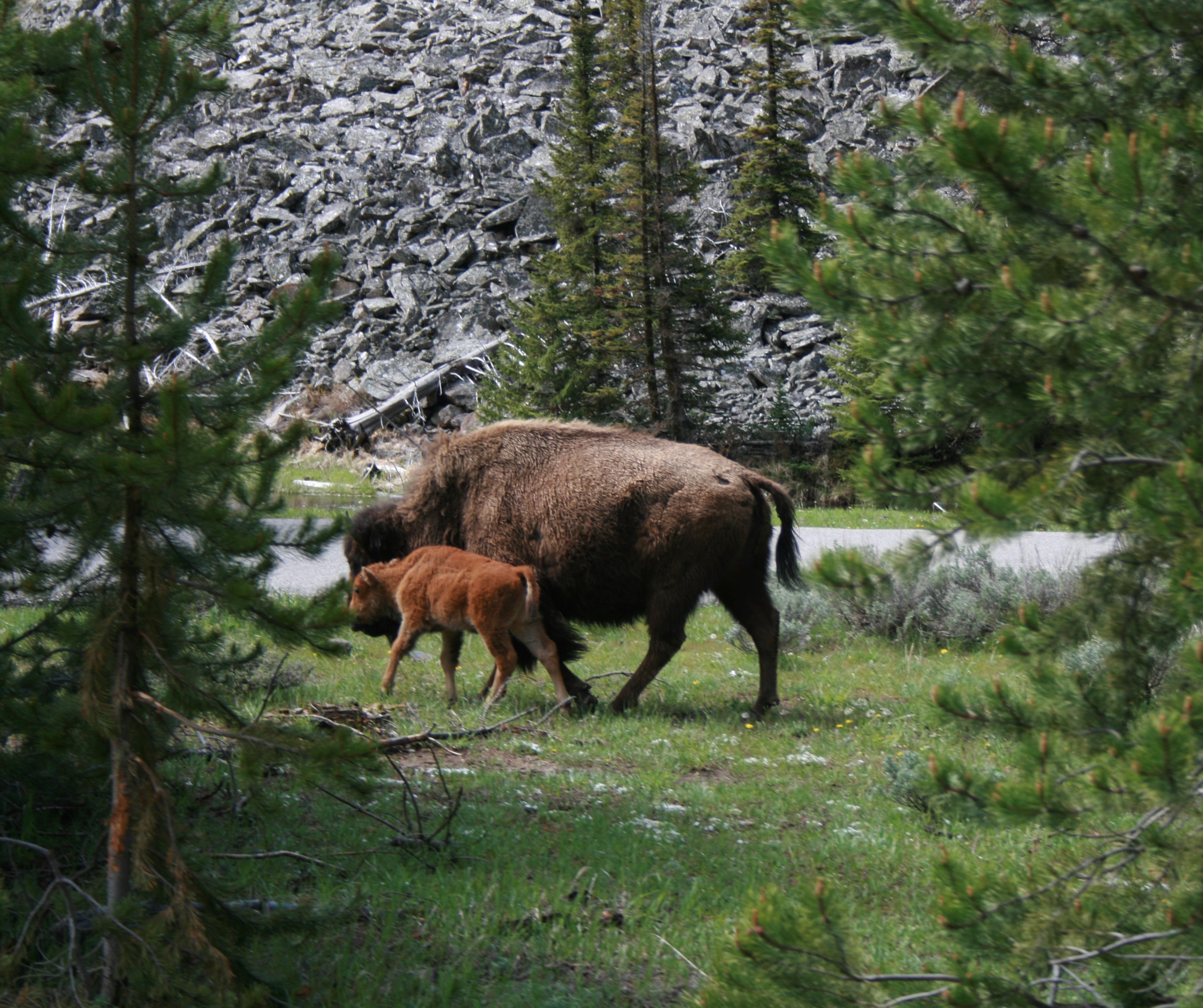 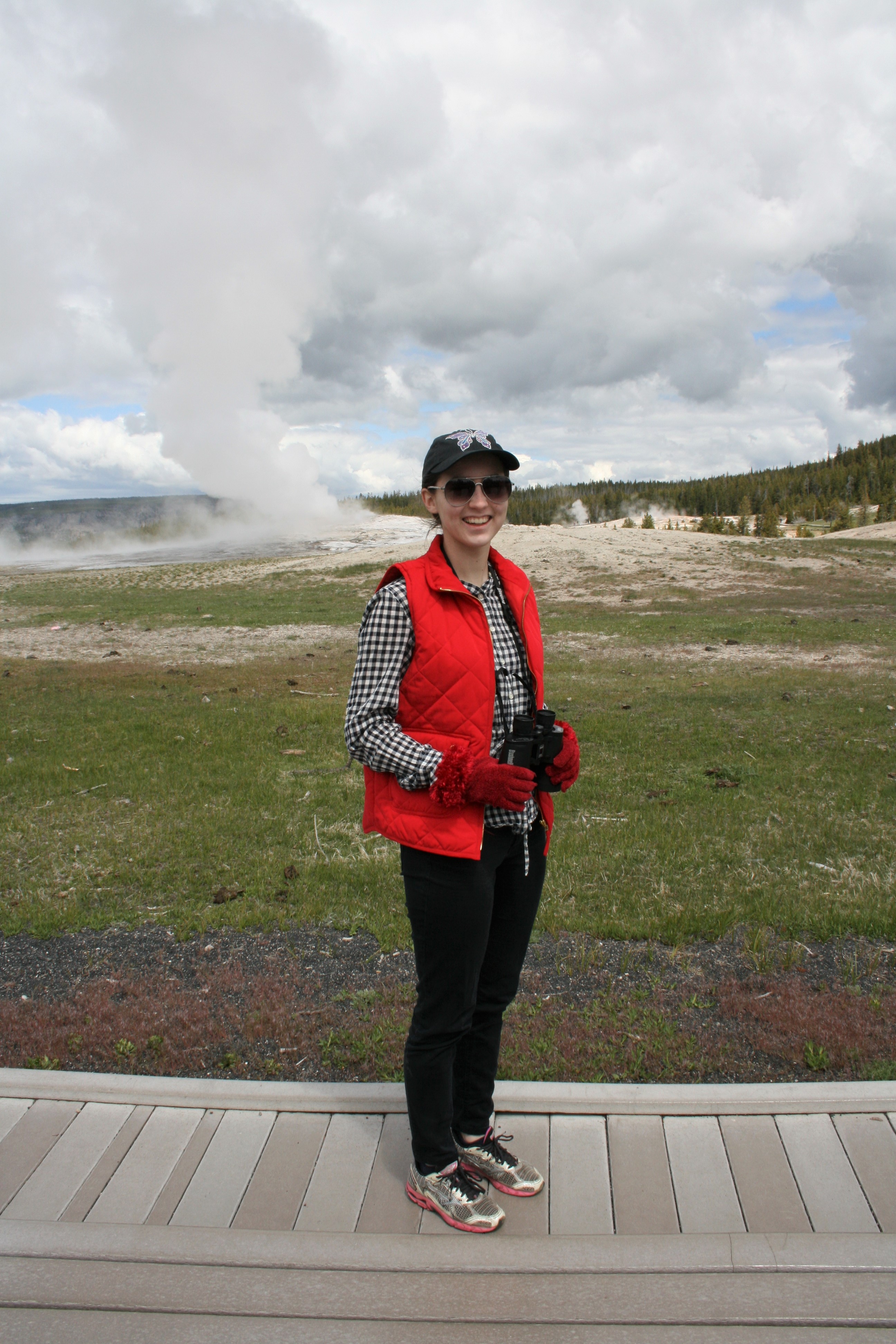 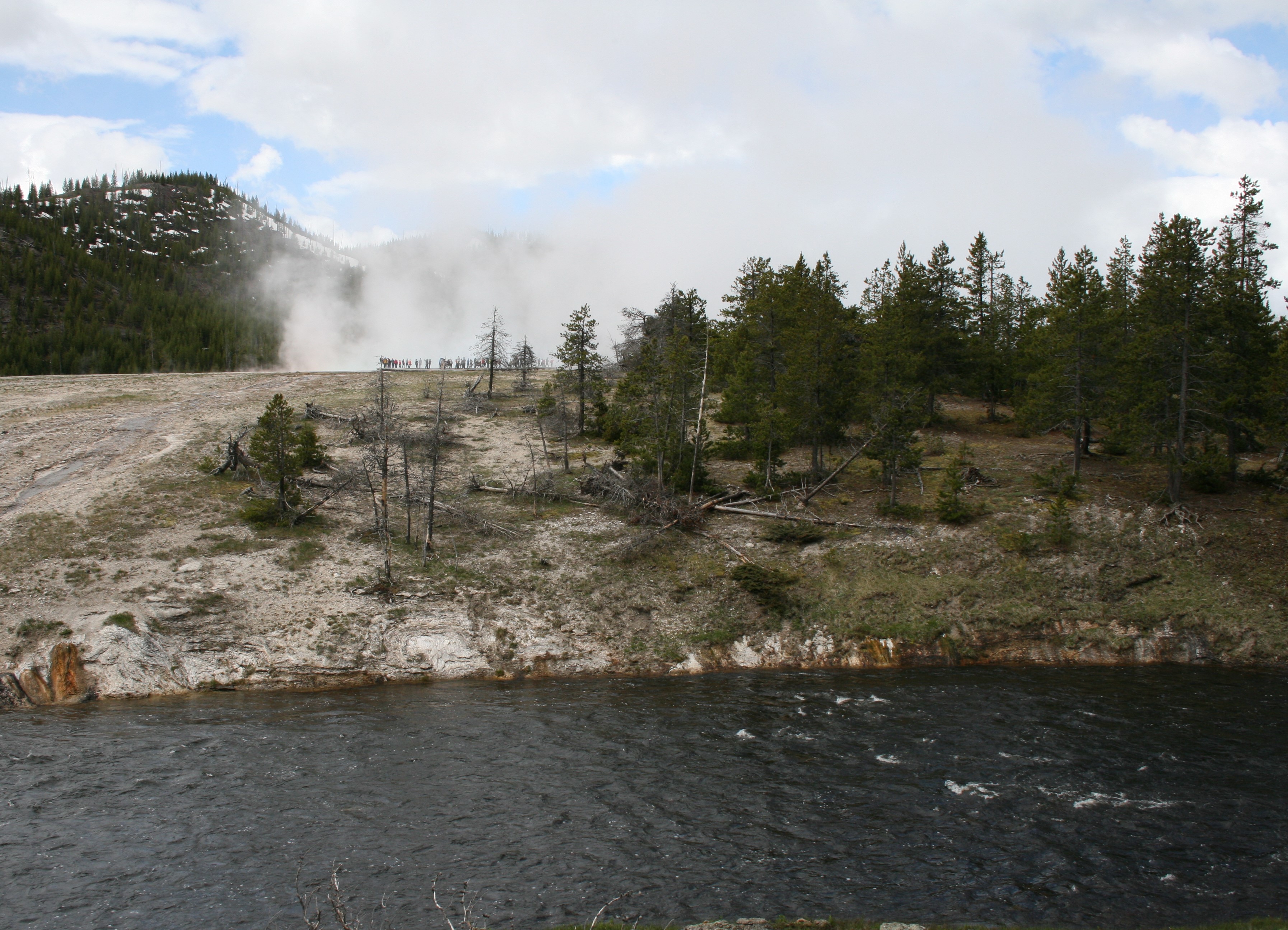 Day 1: We arrived in West Yellowstone around 4 o’clock, so we checked into our cabins, wasted a bit of time deciding on a game plan, and then walked to dinner. We ate at Madison Crossing Lounge, which was fine except my mom’s burger was very undercooked. Be sure to get the huckleberry ice cream for dessert though, ‘cause that was delicious. Also, if you visit Madison Crossing, you should check out the shop that’s right next doors to the restaurant (I don’t remember what it was called…). They had really neat things and I found a nativity scene made out of moose. It was the cutest thing I’d ever seen. A little moose Jesus! Anyway, after dinner, we enjoyed some time by the fire pit. 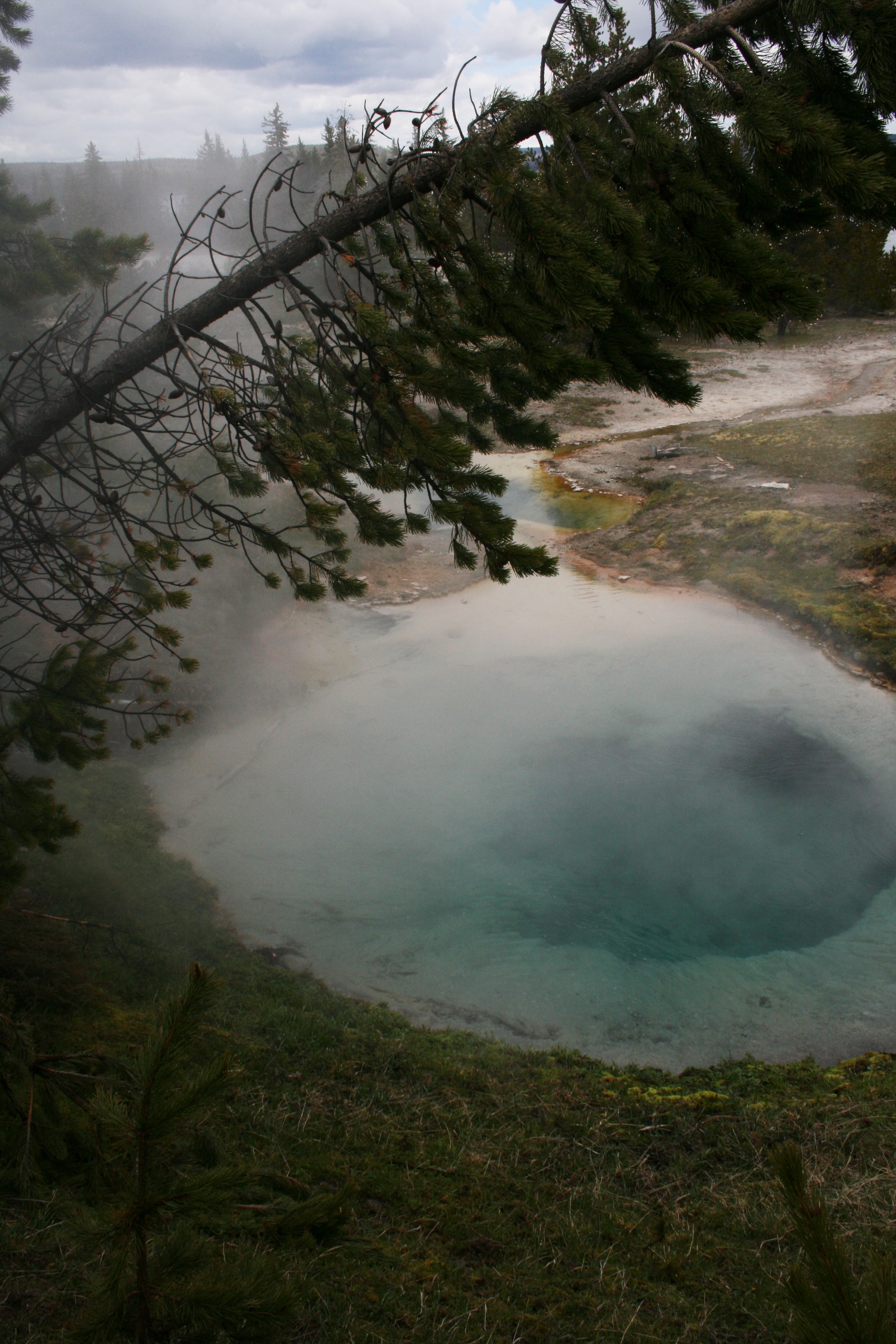 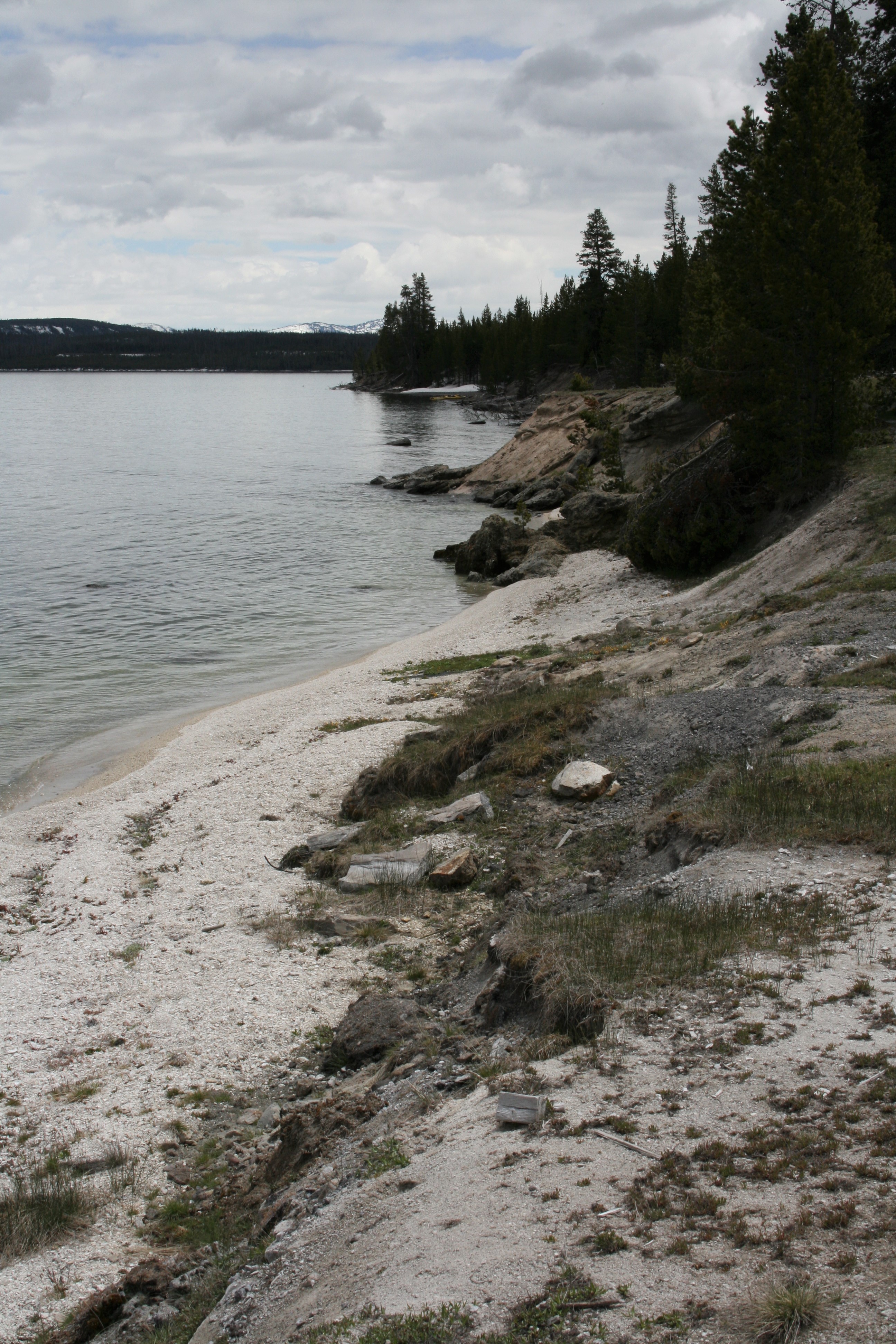 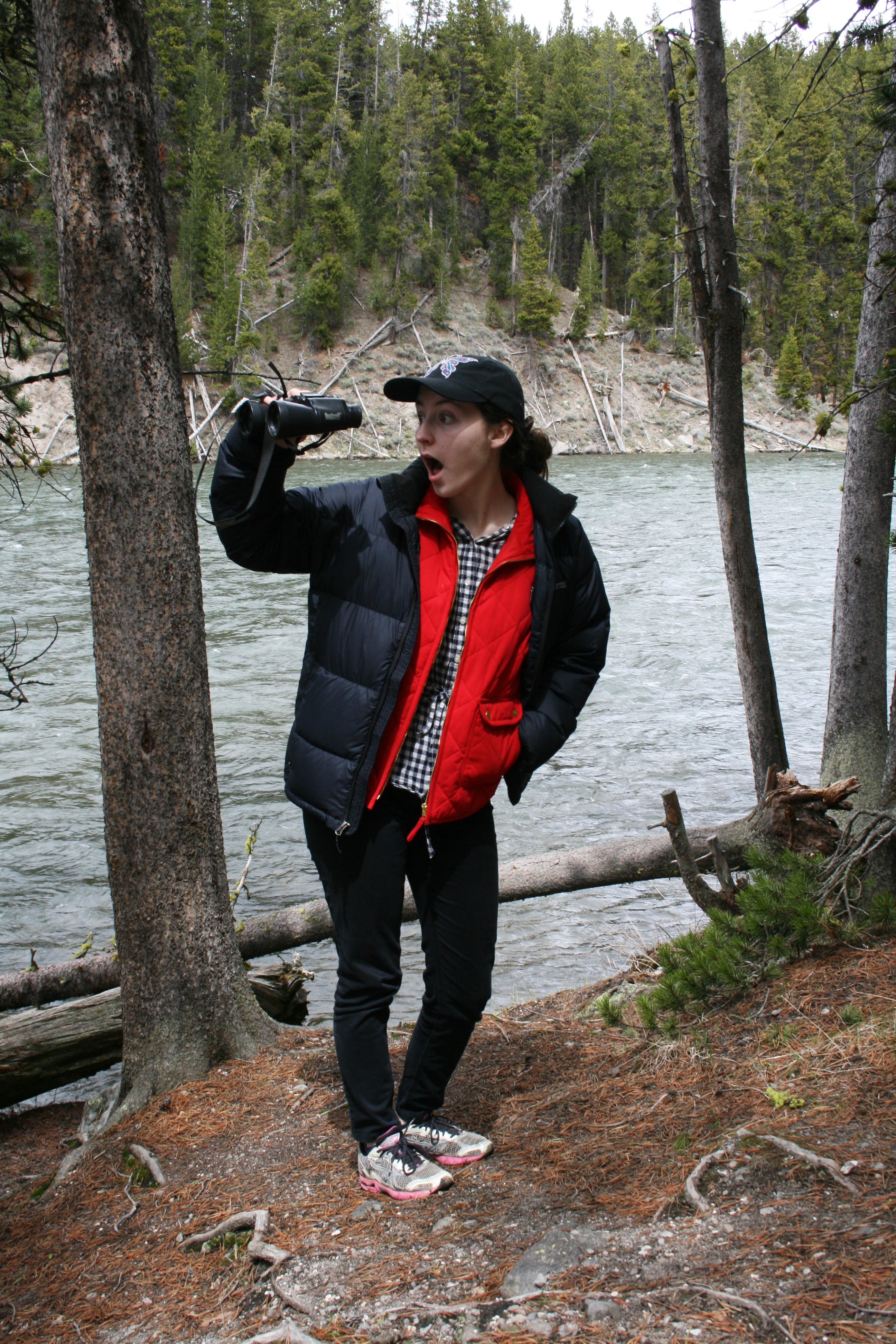 Day 2: The next day, we woke up pretty early and ate breakfast in our cabin. I definitely recommend buying some pastries or cereal and milk to keep in your hotel room/cabin. Being able to eat in our rooms got our days started a lot sooner and allowed us to get to the park right away to try and beat the lines! Unfortunately, we did not beat the rush. I think either way when you try to enter the park, there will be a long line. Just be patient!

After at least a half hour, we entered the park! If you want to see Old Faithful (which, of course you do), then I would recommend watching the times for it. I’m not sure what website it was on, but it’s probably easy to find the park rangers’ predictions for when the geyser will blow next. Our first time in the park, our goal was to get straight to Old Faithful because she was supposed to blow in about an hour. We drove through the park, saw lots of bison and their red babies, and took in the incredible scenery. If you’re ever going somewhere in a rush, be sure to account for slow-downs in the road due to wildlife and trust me, there will be lots of these!

We arrived at Old Faithful, and just as we walked up to join the crowds, she started to spurt! It was the most perfect timing ever. After she finished going off, we walked over to the store right next door and bought some drinks. We thought we had packed lunches in the car, but it turned out someone forgot them in the cabin…Whoops! We decided just to snack instead. I would HIGHLY recommend bringing lots of snacks and water in your car, and it’s also a great idea to pack a lunch (assuming you can remember to actually bring it 😉 ). Once you’re deep into the park, there’s not much to eat, so come prepared and save some money!

We spent the rest of the afternoon driving around, stopping at pullouts, walking around geyser pools, and taking lots and lots of pictures. I brought the binoculars from our cabin with us and they came in handy a lot!

Once outside of the park, we walked to dinner from our cabin. It was just a little diner, but it was still pretty expensive; all of the restaurants we visited were pricey. That’s supply and demand for ya.

We then walked around the town a bit. It’s super cute and there’s some fun sculptures/old park tools all around, so it’s worth a wander. We ended up walking passed an old time photo shop, and I convinced my family to do it! If you’re unfamiliar with what an old time photo shop is, you dress up in costumes from the Wild West and then take a picture in sepia or black and white. It’s so stinking fun and makes a great souvenir. I provided a little glimpse of our picture farther below—look at my hat! It was pretty expensive for one picture (and there was a sale going on when we did it), but I think it was totally worth it. It’s such a priceless memory and the pictures turn out so funny. You can check out the shop on Facebook by searching Madison Avenue Old Time Photos.

Afterwards, we made s’mores by the fire! 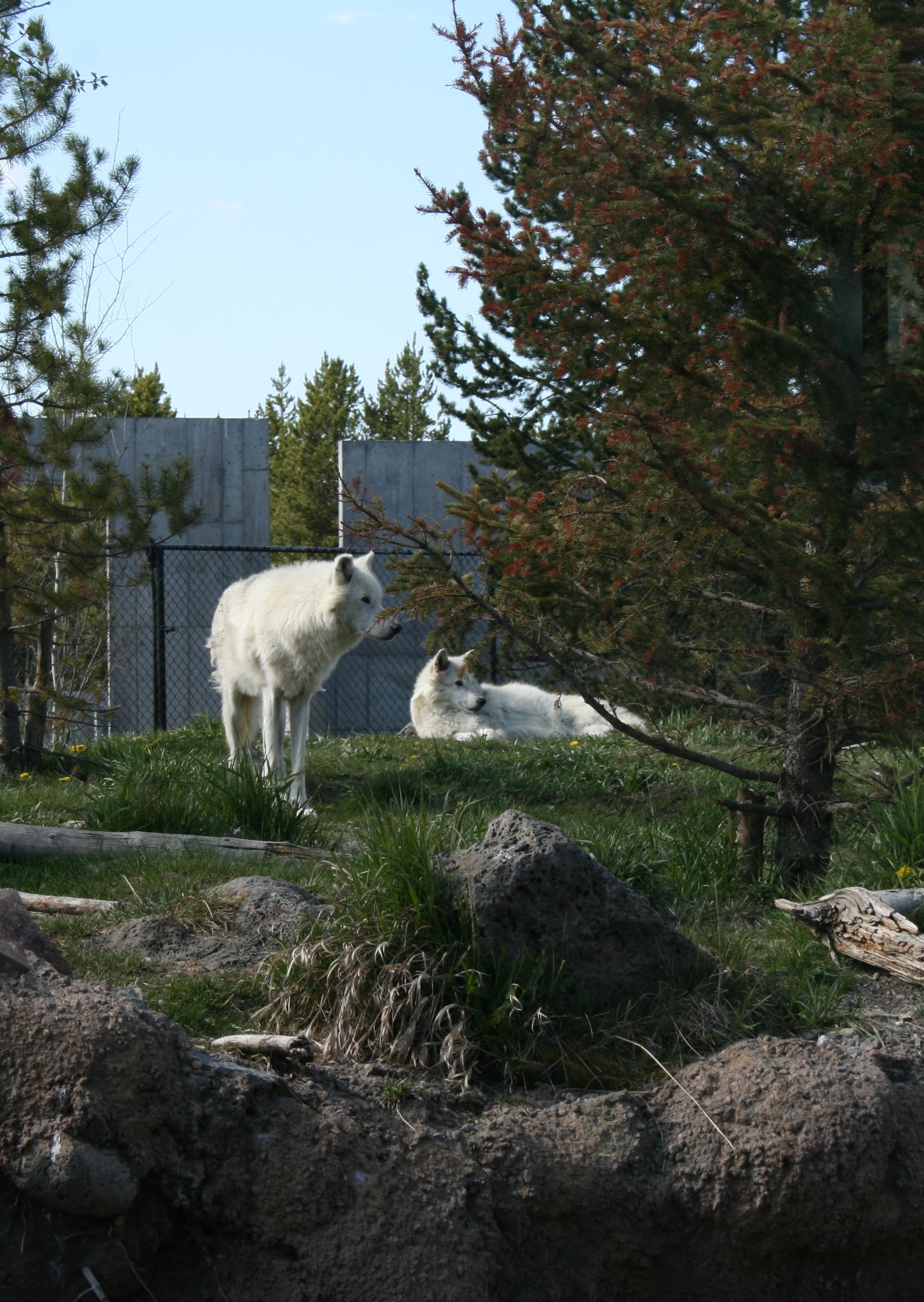 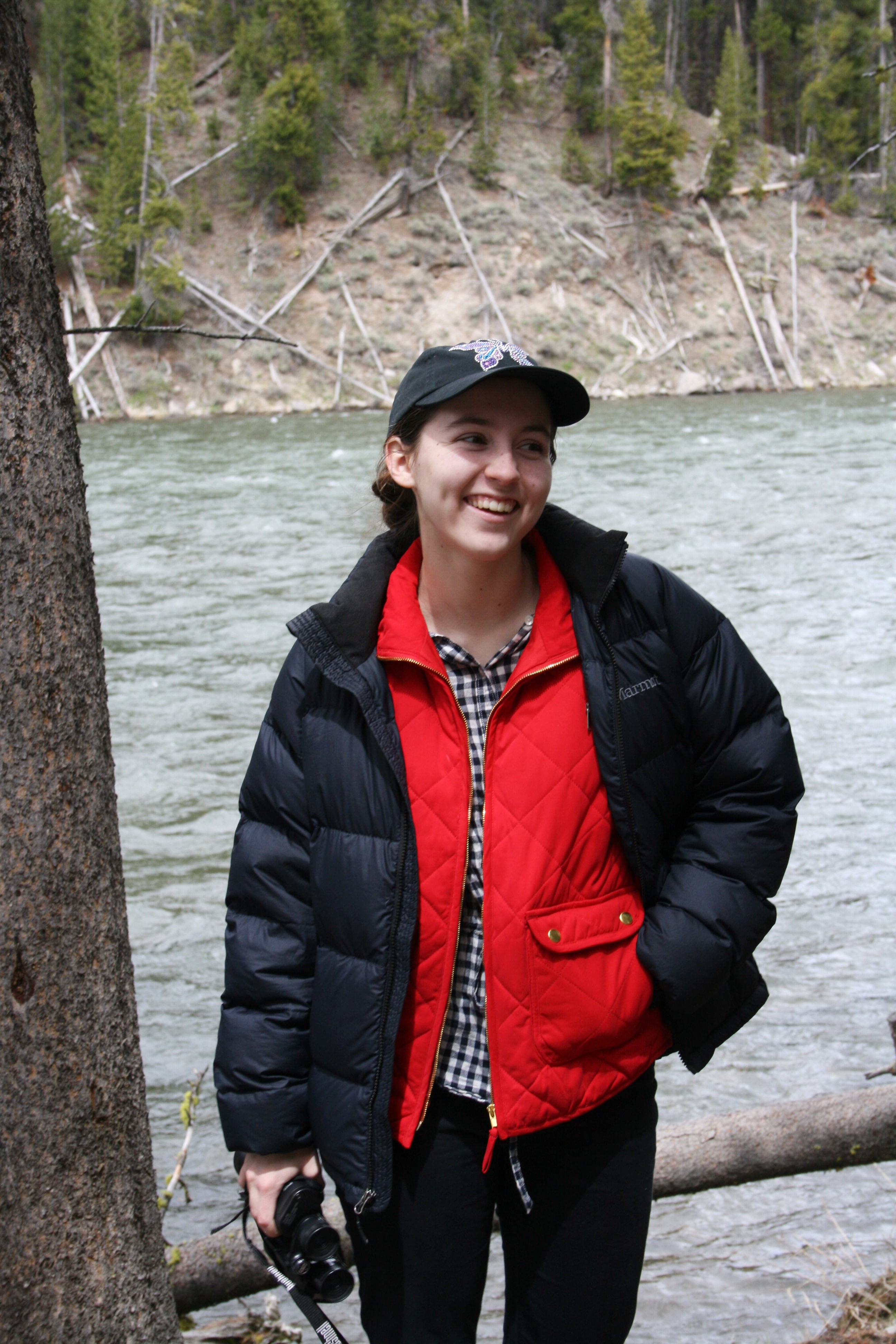 Day 3: After eating breakfast in our cabin again, we went across the street to the Grizzly and Wolf Discovery Center, where they help bears, wolves, and birds of prey that couldn’t otherwise survive in the park. It was really fun to learn about the animals’ habitats and their unique personalities, and it was a great substitution if you end up not seeing a bear in the park itself (like us).

After that, we entered Yellowstone National Park again, which took less time because we could go down the “fast lane”. We leisurely drove around and went wherever we felt like. We pulled up to some hot pools to eat the pre-packed lunch that we thought we were going to eat the previous day, and then we decided to go for a hike. The hike we did was called Mystic Falls and I definitely recommend it. I think it took us around an hour (maybe an hour and a half), and it was the perfect mix of “good workout” and “actually enjoyable”. It is a loop, but when you begin the hike, take a right instead of a left! That way, you get to enjoy the Mystic Falls as a reward near the end of the hike instead of at the very beginning.

Afterwards, we drove to Old Faithful again to grab some ice cream and just happened to see her go off again! What luck. While you’re at the geyser, you should check out the lodge. It’s a neat piece of architecture! Even though the building looked very cool, we were ultimately glad we chose to stay outside of the park because it meant a lot more food options and activities. We spent the rest of the day driving on little side roads and making a point to take the path less travelled. 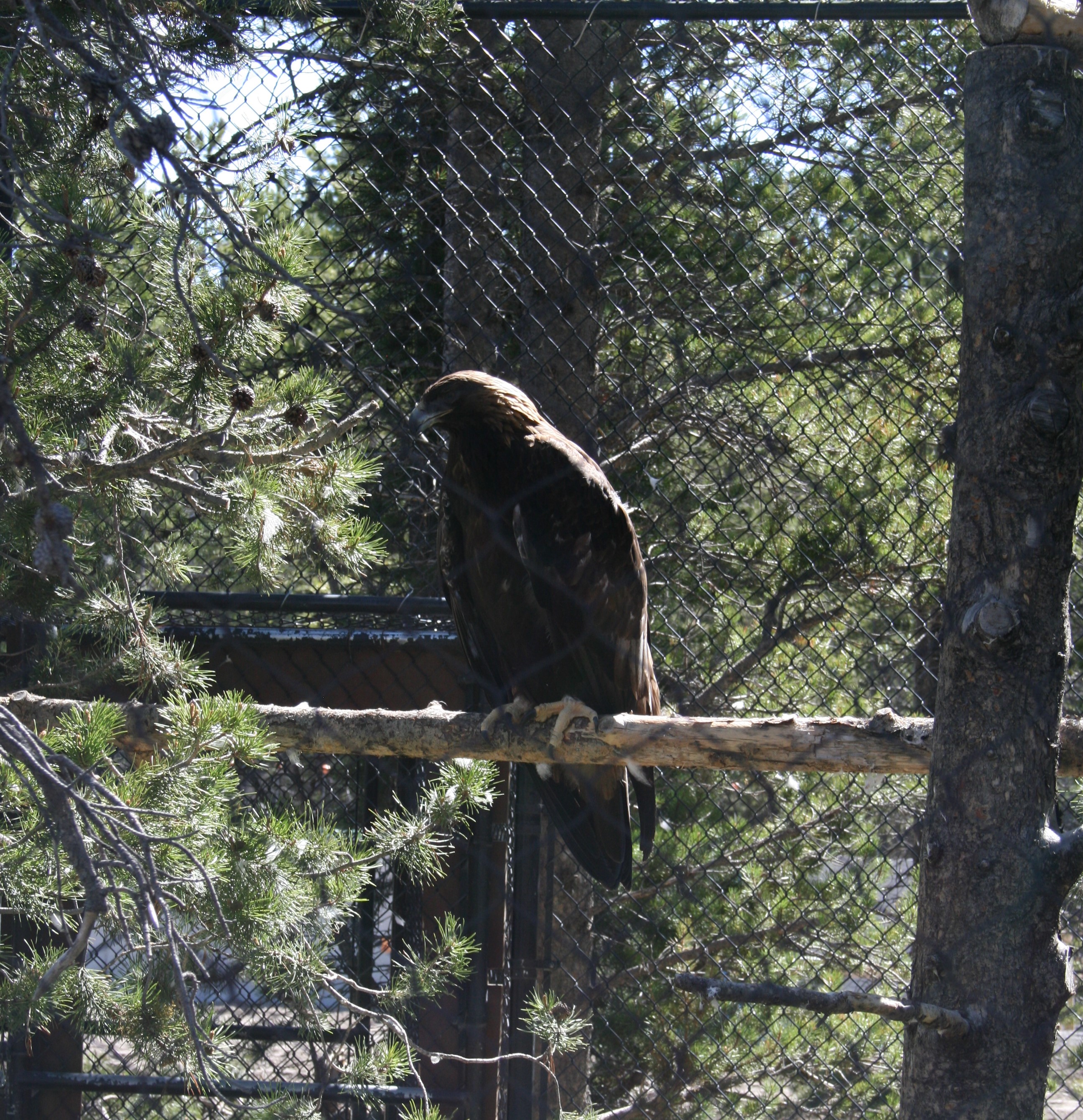 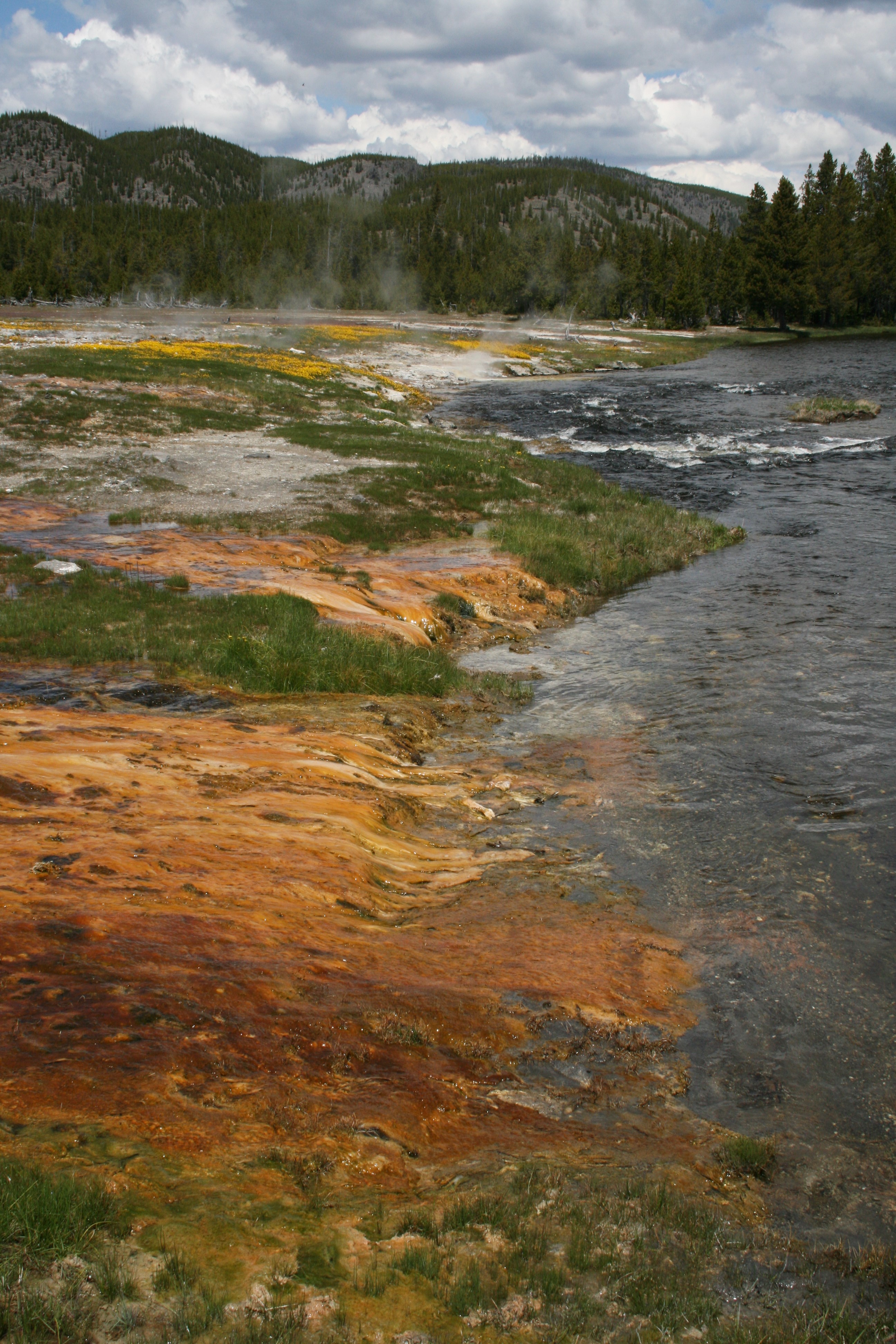 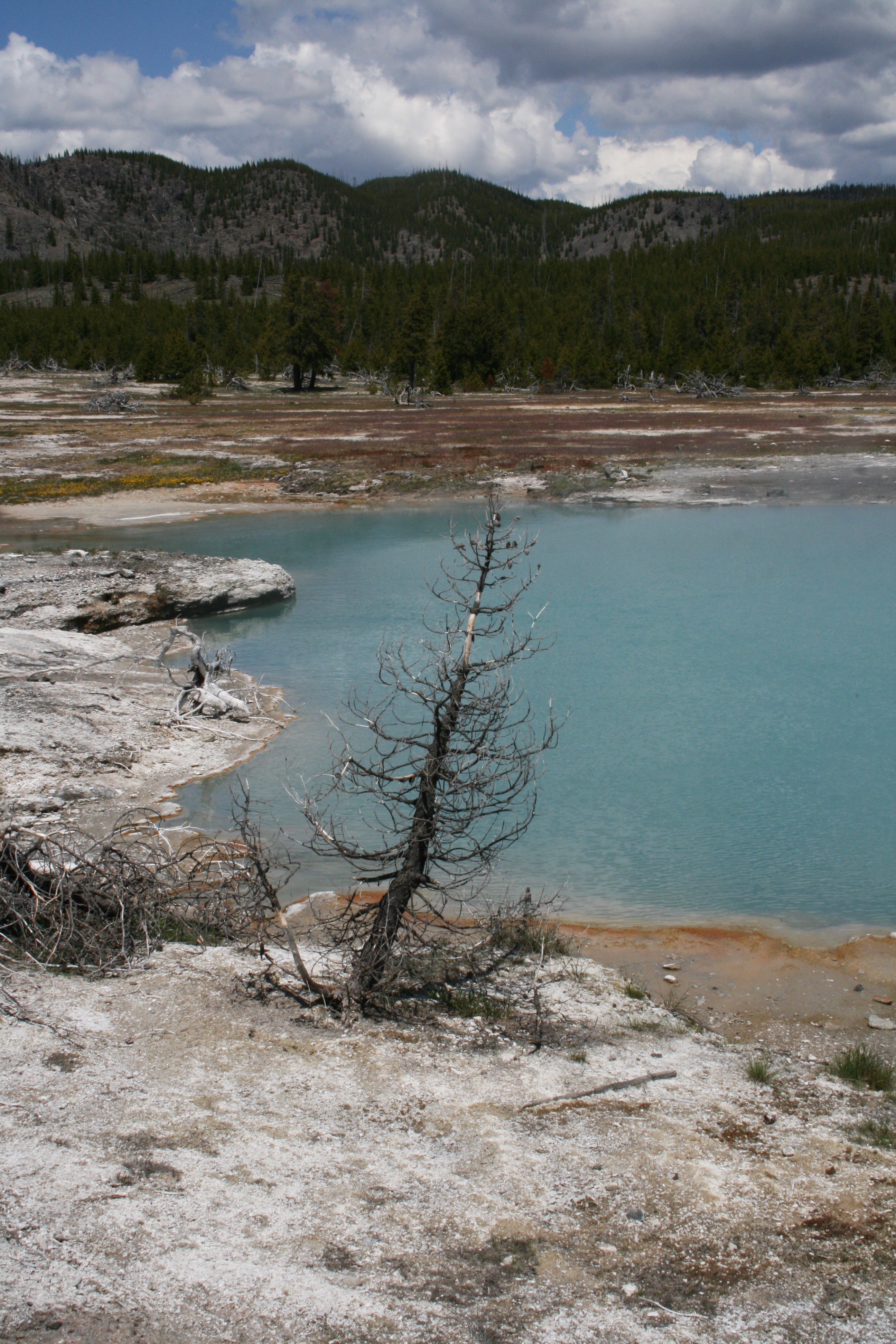 Some non-clothing items that you should pack are binoculars, sunscreen, bug spray (there were mosquitos at night!), walking sticks, s’more materials, and food. In terms of clothing, even though we went in the summer, it was still very cold at times. The weather changed on us a lot, so bringing a mix of layers would be a good idea. I wore pants, a flannel, and vest the first day and was too cold, but I wore the exact same combination the second day and was too hot during our hike. That’s why I think pants, a short sleeve shirt, and some light jackets would be the best combination. Don’t forget to bring gloves, a beanie and sunhat/ball cap, a big coat, and hiking boots/walking shoes. Yellowstone was definitely not a place to be making fashion statements. 😉 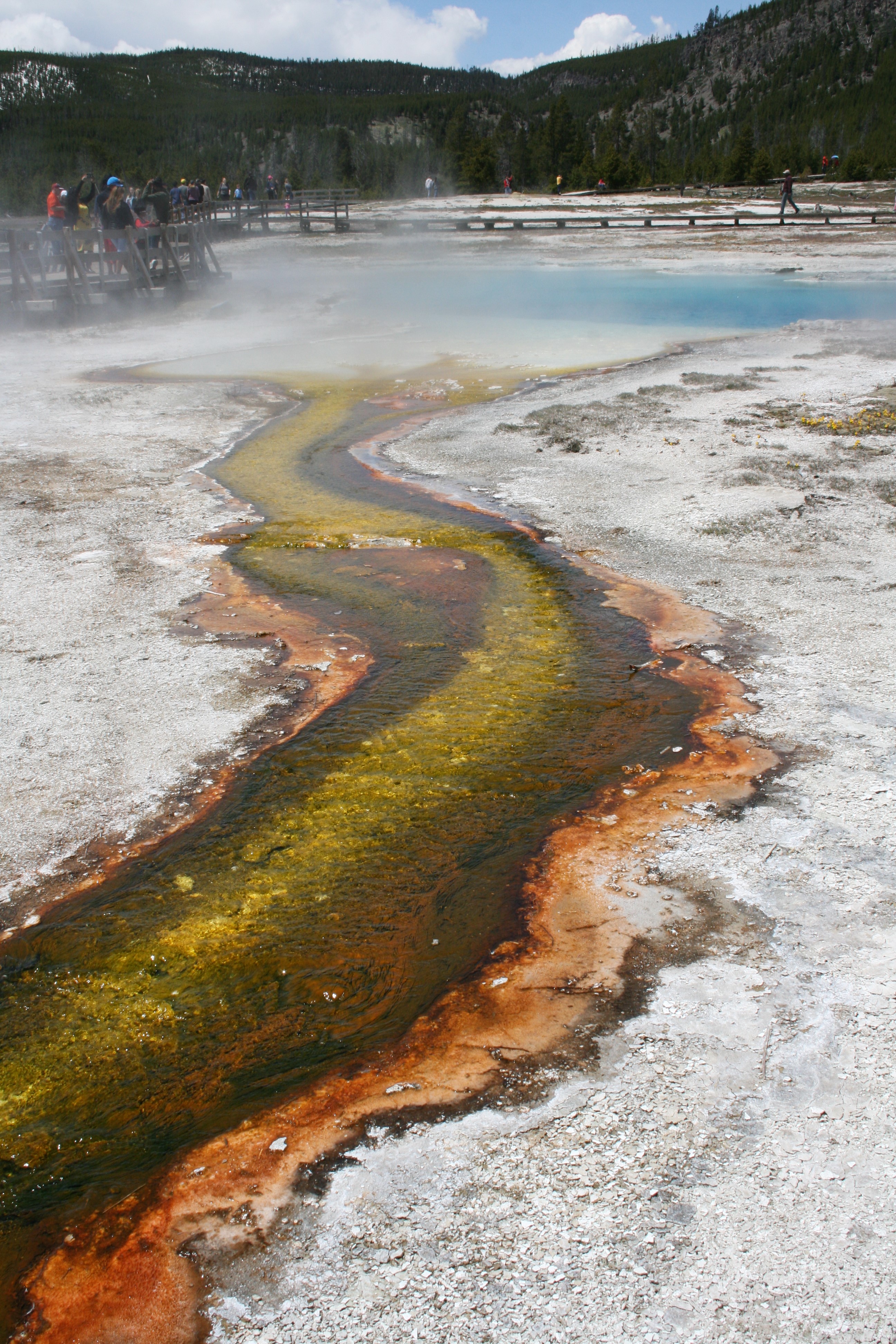 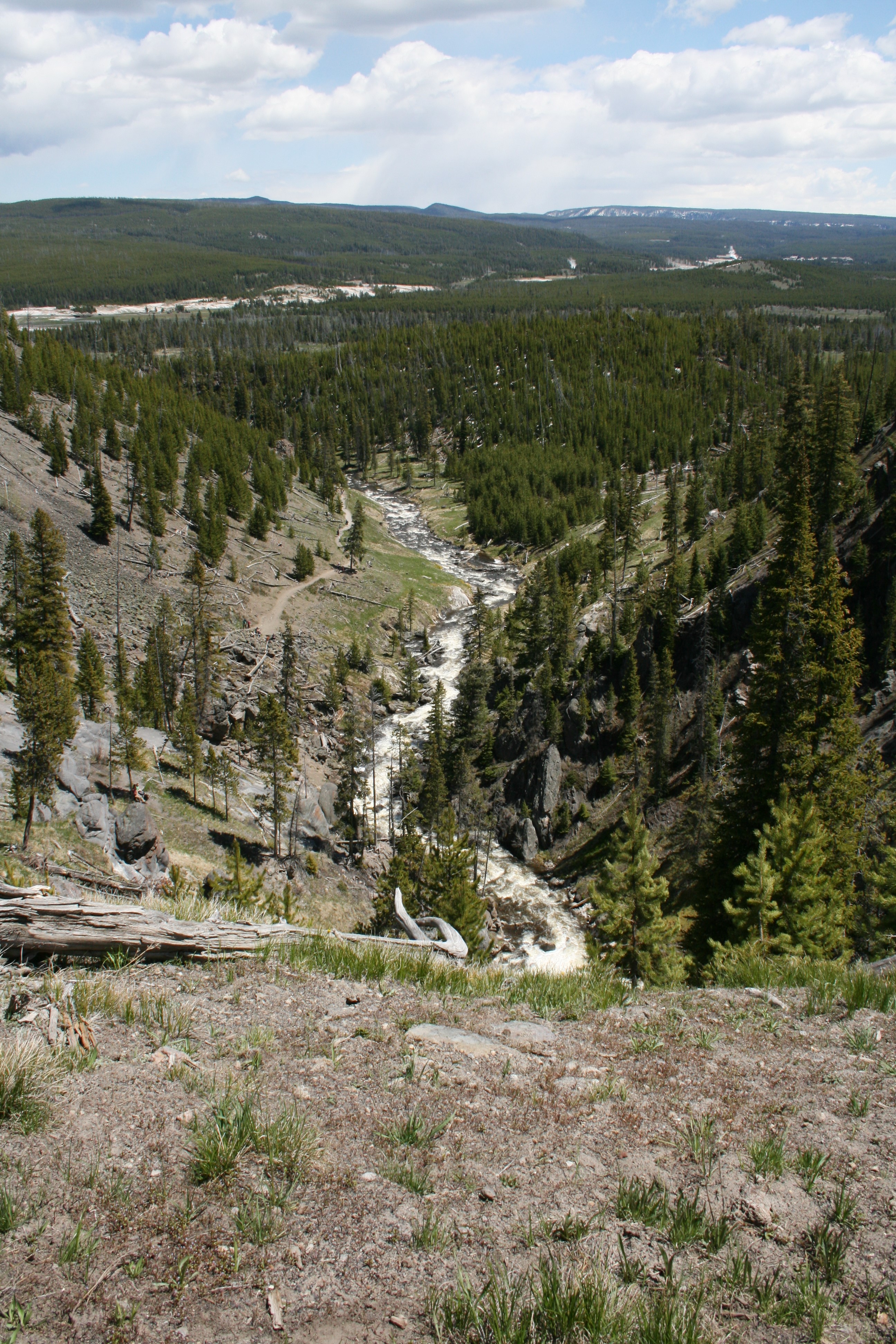 Like I said, Yellowstone obviously has an outdoors-y vibe, not a fashion-forward, trendy feel. Showing up in heels and a midi skirt would definitely be a faux pas! While there, I noticed lots of skinny jeans, flannel, quilted vests, and duck boots. I also saw lots of cute sweaters and drape-y open cardigans, beanies, and puffer coats.

Phew, this was a very long post! If you’re going to Yellowstone anytime soon, I hope you will find this post helpful. Overall, I had such a fun time in West Yellowstone and would totally recommend it to people who enjoy the outdoors, wildlife, and unplugging for a bit. Have a wonderful Wednesday!

Linking Up with Elegance and Mommyhood and Lizzie in Lace

Another day, another thrifted jumpsuit 🧡 Actua